Over the last three years I’ve probably visited more cities in Russia than anywhere else. The main reason of course having been the global travel restrictions during covid (which some countries are only just lifting, while others (e.g., China) aren’t even contemplating doing so). Then, this year, international travel for Russians has become a lot more difficult, with multiple connections being now the norm where before there were direct flights. Accordingly, I’ve been doing a lot more domestic travel – for both business trips and adventure-tourism expeditions. And I’ve been visiting plenty of places for the first time too. Just this year I’ve been to the following cities for the first time in my life:

And just the other week I had another +1: Norilsk…

Norilsk is no ordinary city, as you either knew before, or now know from the title of this blogpost. Yes, it’s very far north – so, of course, it gets frightfully cold (down to -60°C sometimes!) here in winter. But summer ain’t much better: constant rain. Then there are the strong winds year round. Then there’s the whole ecology… issues – but more on them in a bit… 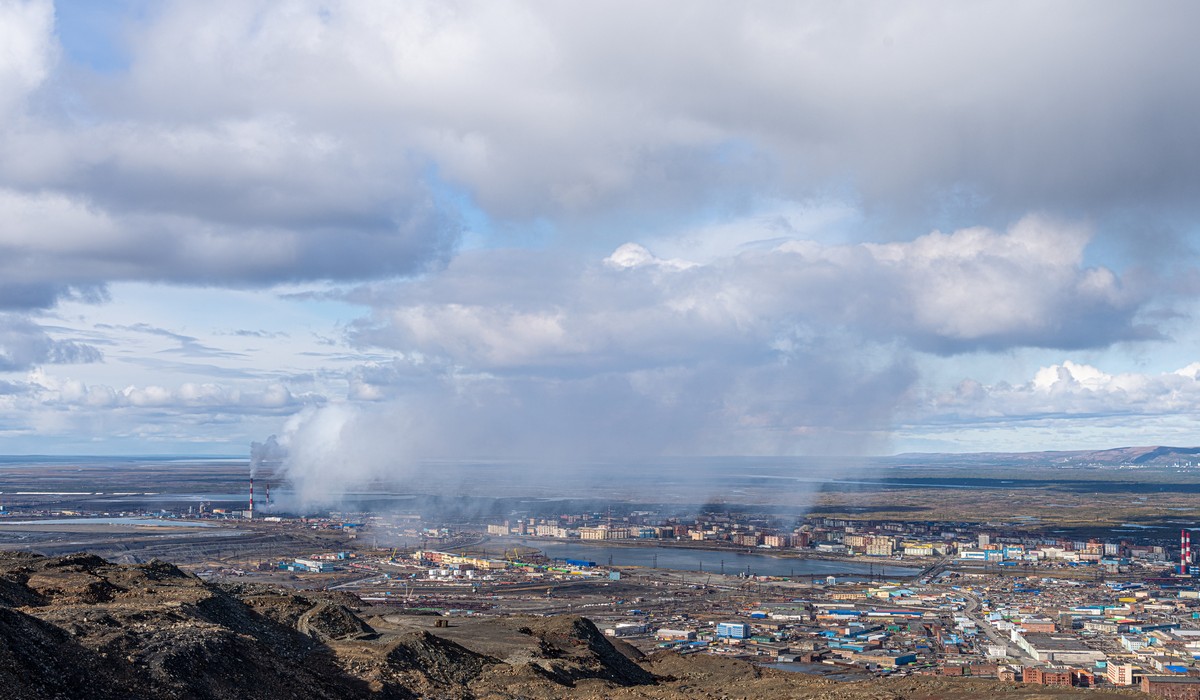 Perhaps to offset the general, constant grayness of the climate – plus the polar nights (where it never gets light the whole day), the city’s buildings (especially downtown) are all painted in bright – almost gaudy – colors. Well why not? I think if there weren’t the bright colors the gloom-laden city dwellers might just go mad!

Just before setting off – in late August – we checked the weather forecast. And it wasn’t any better than what we’d been used to in the Kurils!

Curiously, there are hardly any trees in the city. The forest-tundra that was once here was all cut down long ago; meanwhile, newly-planted saplings are in no hurry to grow. In the center you get these here bushes, which in any normal climate would no doubt already be trees. Curiously, they only grow above the warm underground hot-water pipes! Everywhere else – the trees bushes just whither and die in the extreme cold. 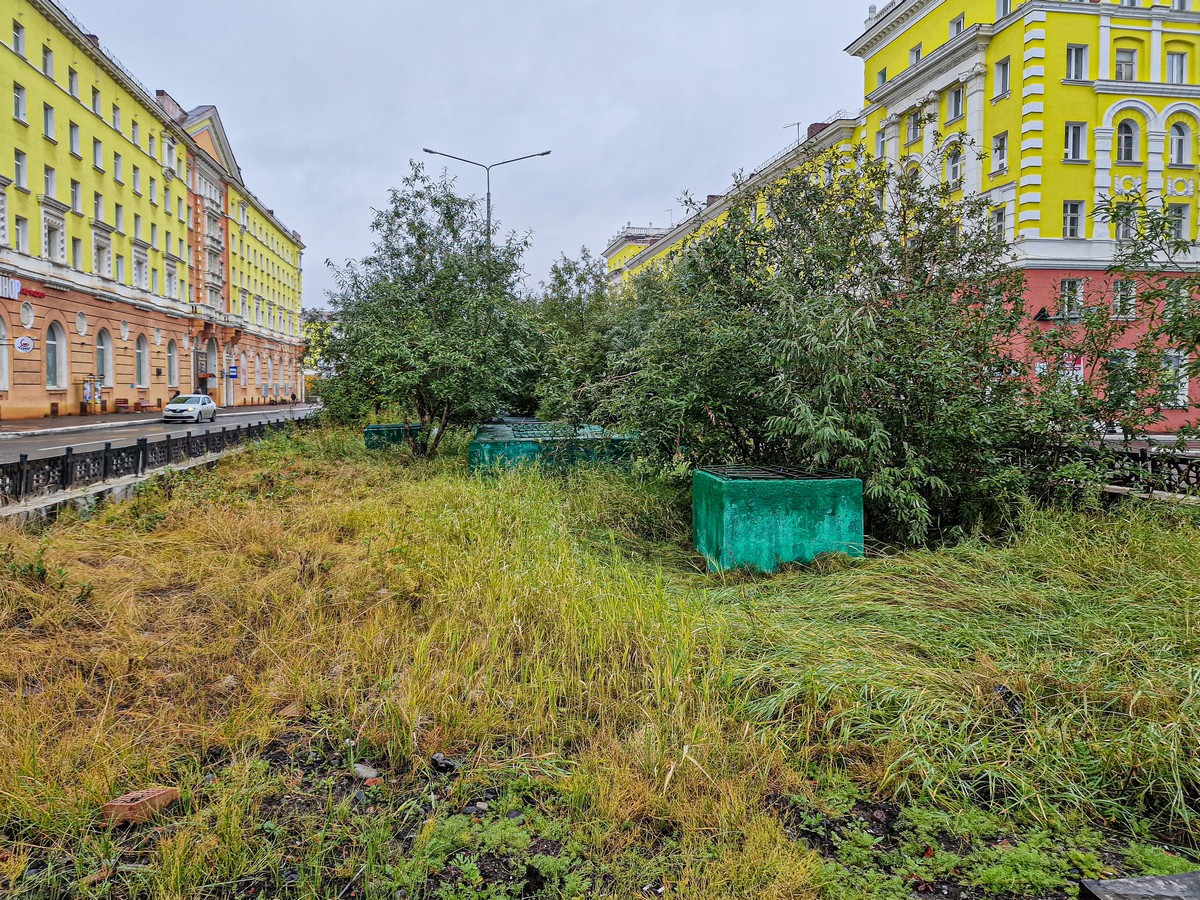 I mentioned “ecology” above. Alas, its status as “poor” is very noticeable. To me, there’s only one other city with a stronger “industrial aroma” than Norilsk, and that is Beijing. Perhaps there are other cities where it’s worse, but I’ve never been to any myself… 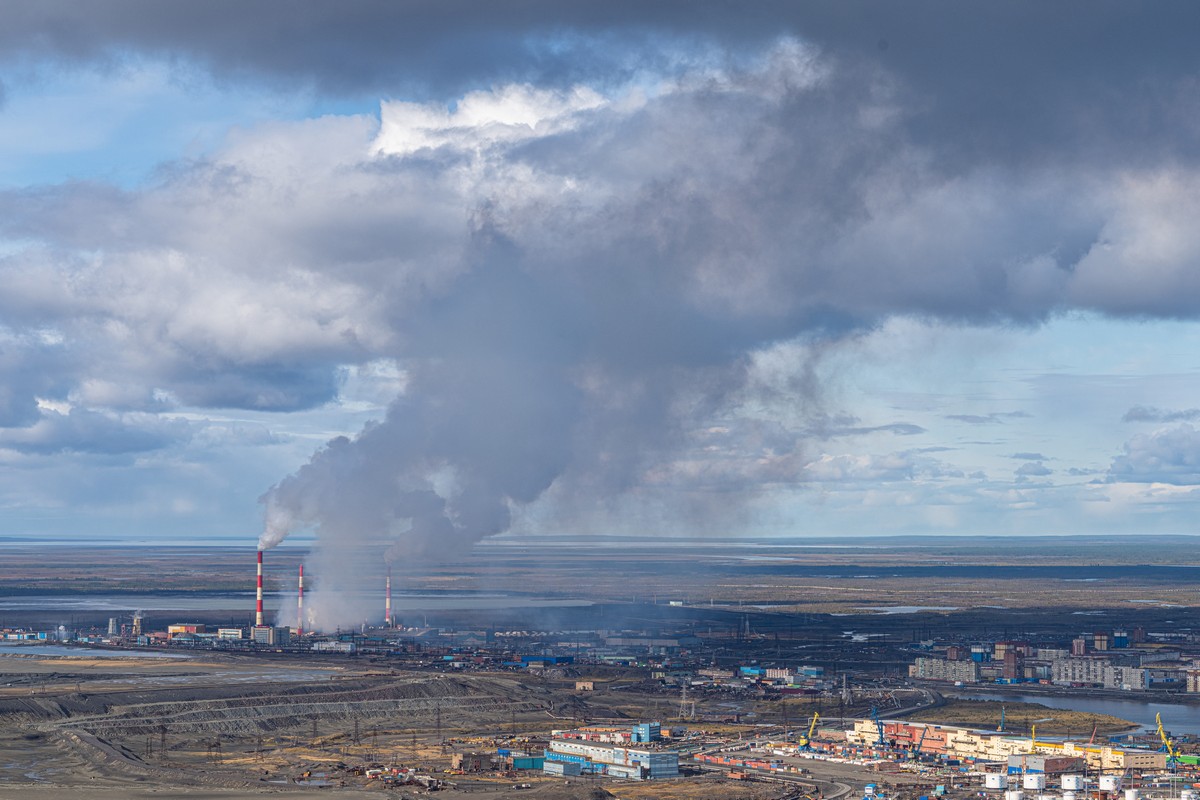 Still – when a single city is home to several steel works (!) plus several (probably coal-fired) power plants (!), what exactly were you expecting? The upper reaches of the Swiss Alps? However (reining in my sarcasm), I have to say that I’ve been to other cities with similar levels of heavy industry and, well, they don’t feature air that stinks to high heaven!

Check this next pic as an example of what fills the air around here. There are clouds in the sky, but that seemingly low cloud in the middle of the pic is actually smoke from a copper plant! Yikes! 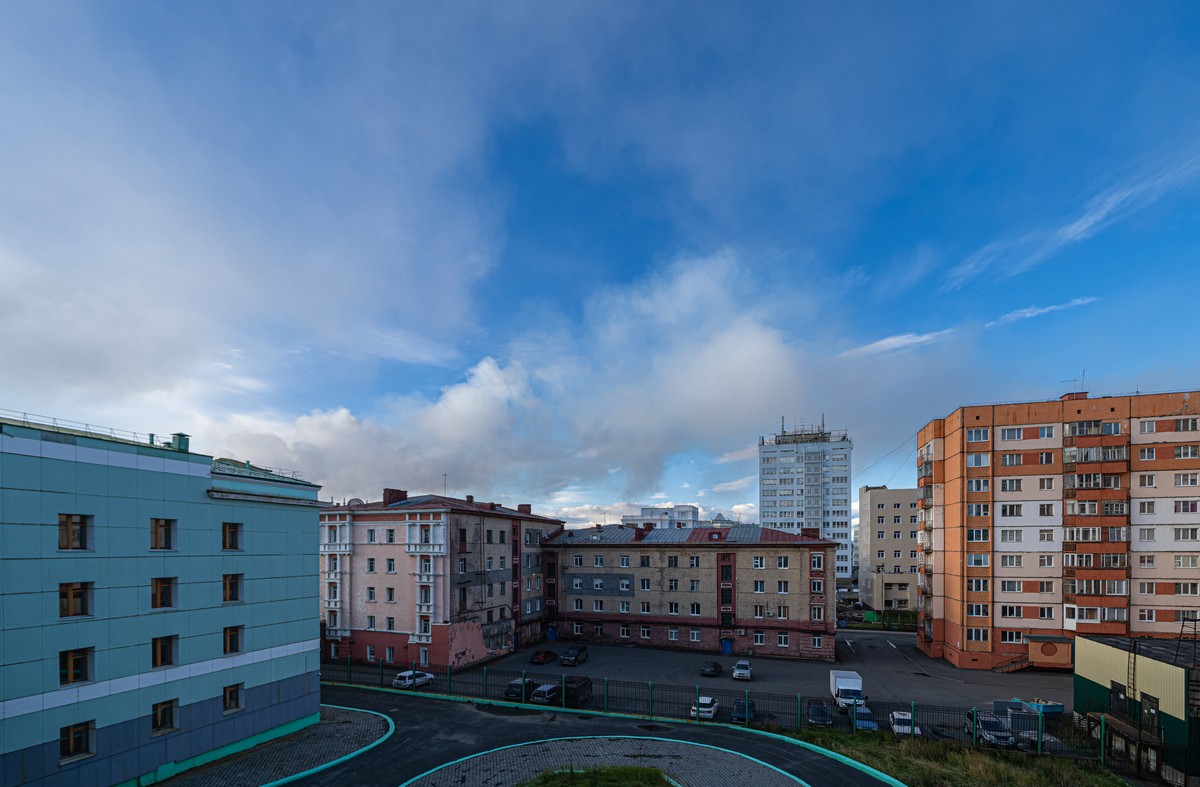 Apparently things were worse in the past. On the other side of the city there was a nickel plant (closed in 2016), and folks back then were able to tell which way the wind was blowing by the smell of the air! Still, the locals are a hardy, optimistic lot (surely that’s the only way to survive here), and, instead of begrudging the occasional pea-soup industrial fog covering the city, they instead utter things like: “Now that’s the sweet smell of pollution-premium payouts!” :)

It was time for a walkabout… 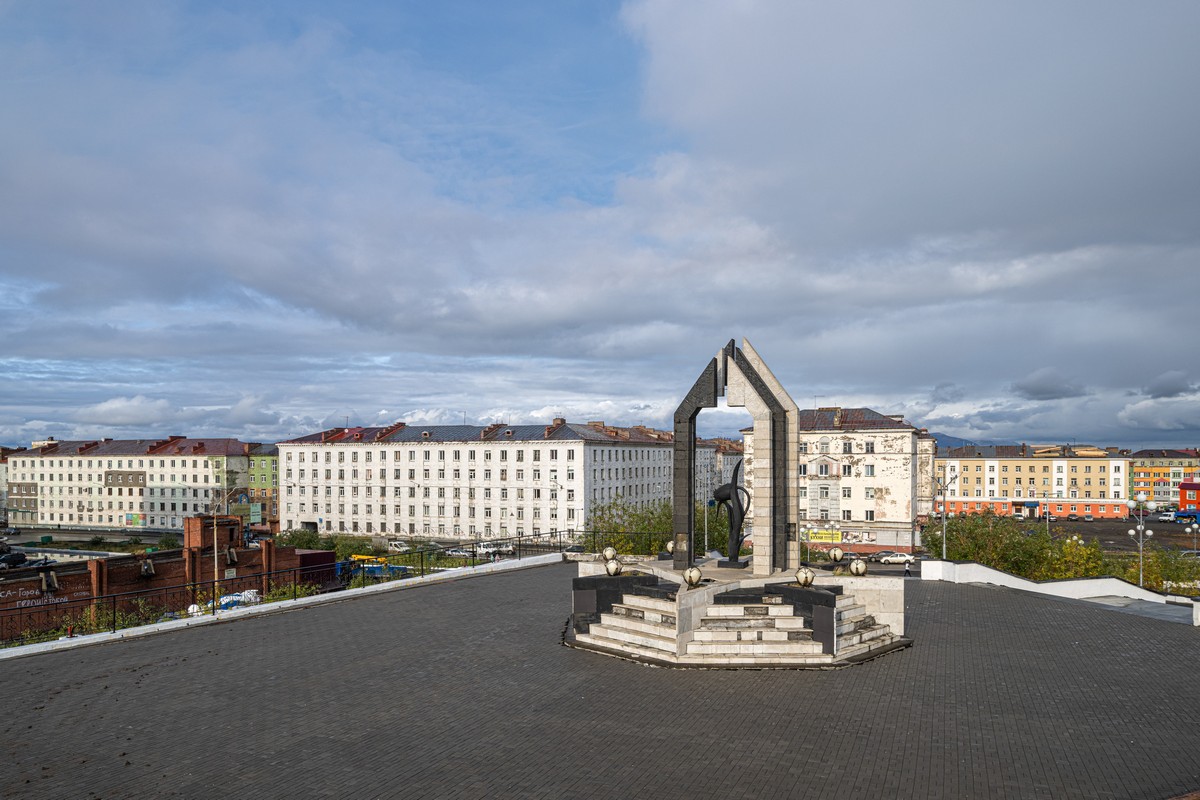 On the horizon, behind this charming little chapel, the Nadezhda (“Hope”!) steel plant smoking away -> 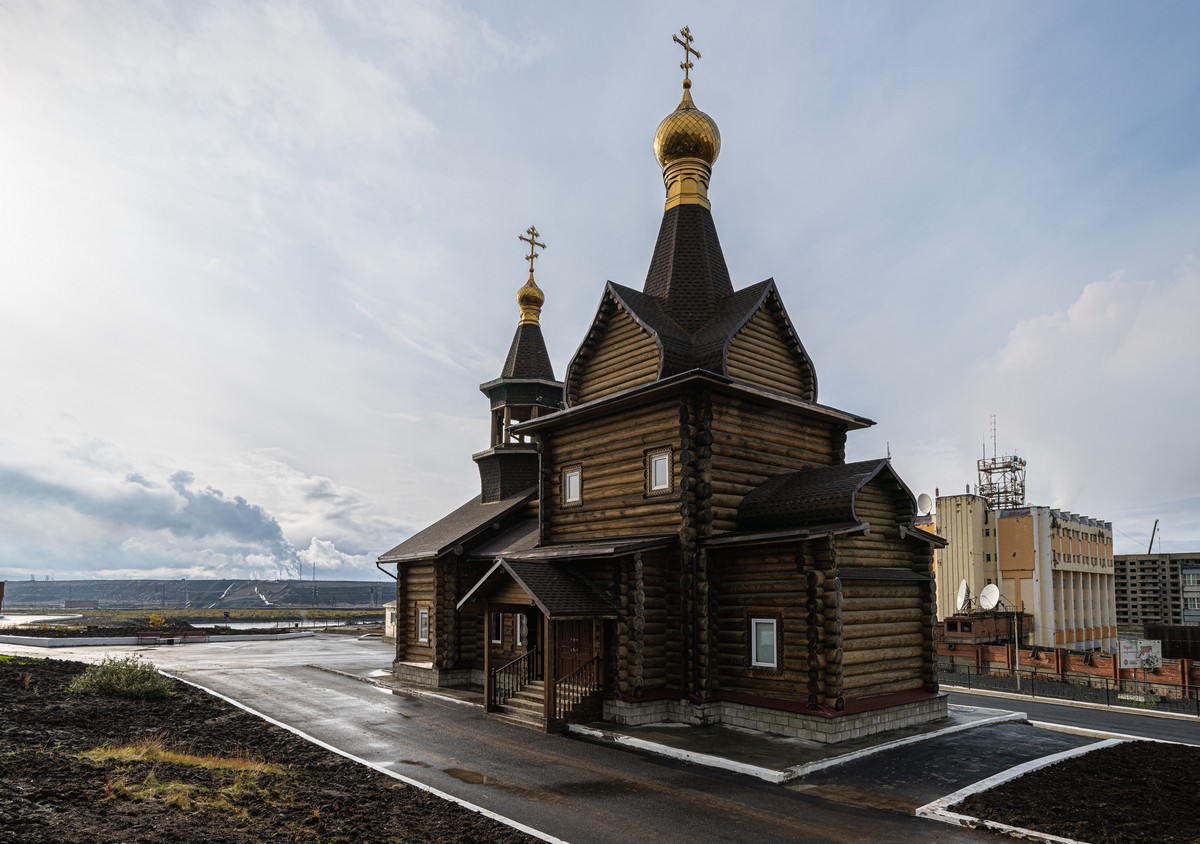 The population is multicultural. Here’s a mosque, for example: 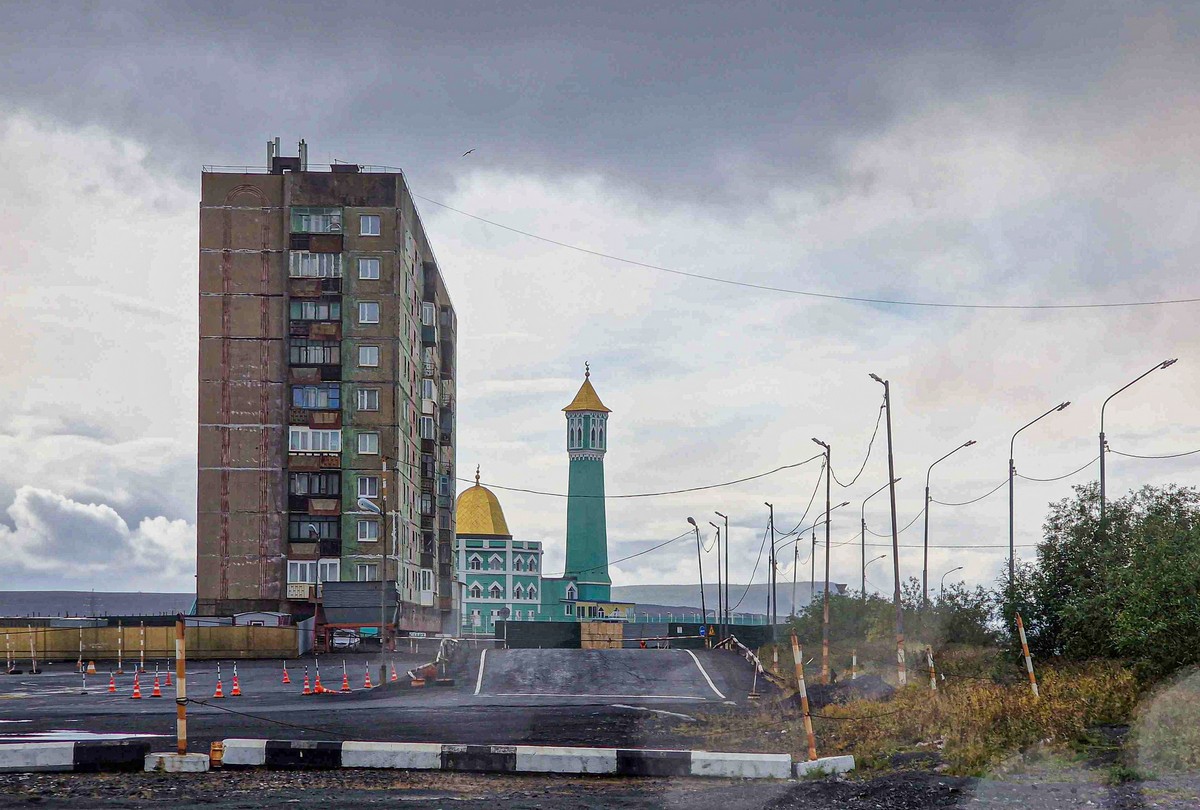 Here’s a monument to Nikolai Urvantsev, the geologist who discovered the Norilsk coal basin and copper-nickel ore region, and who helped found the city. His biography is most interesting: he discovered the lost letters of Amundsen’s Arctic expedition crew members – in the Kara Sea, and, after helping set up Norillag – a localized version of the GULAG – he eventually found himself an inmate there after wrongly being accused of wrecking. In a word: a checkered history indeed (ok – four words). 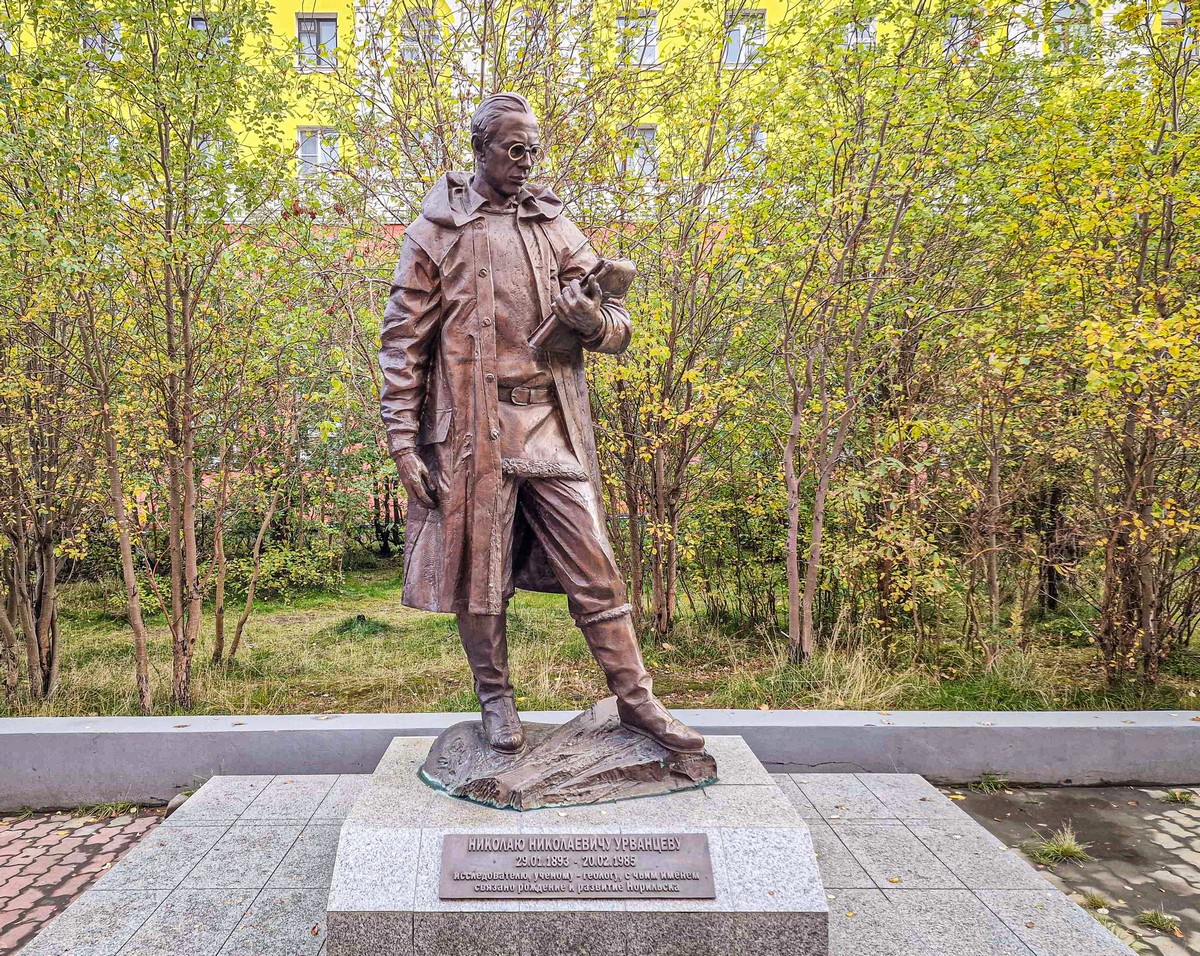 He also built… his own house – the first one, which kicked of the settlement which later became Norilsk (and it’s still standing; how many cities of the world can boast such a thing?) -> 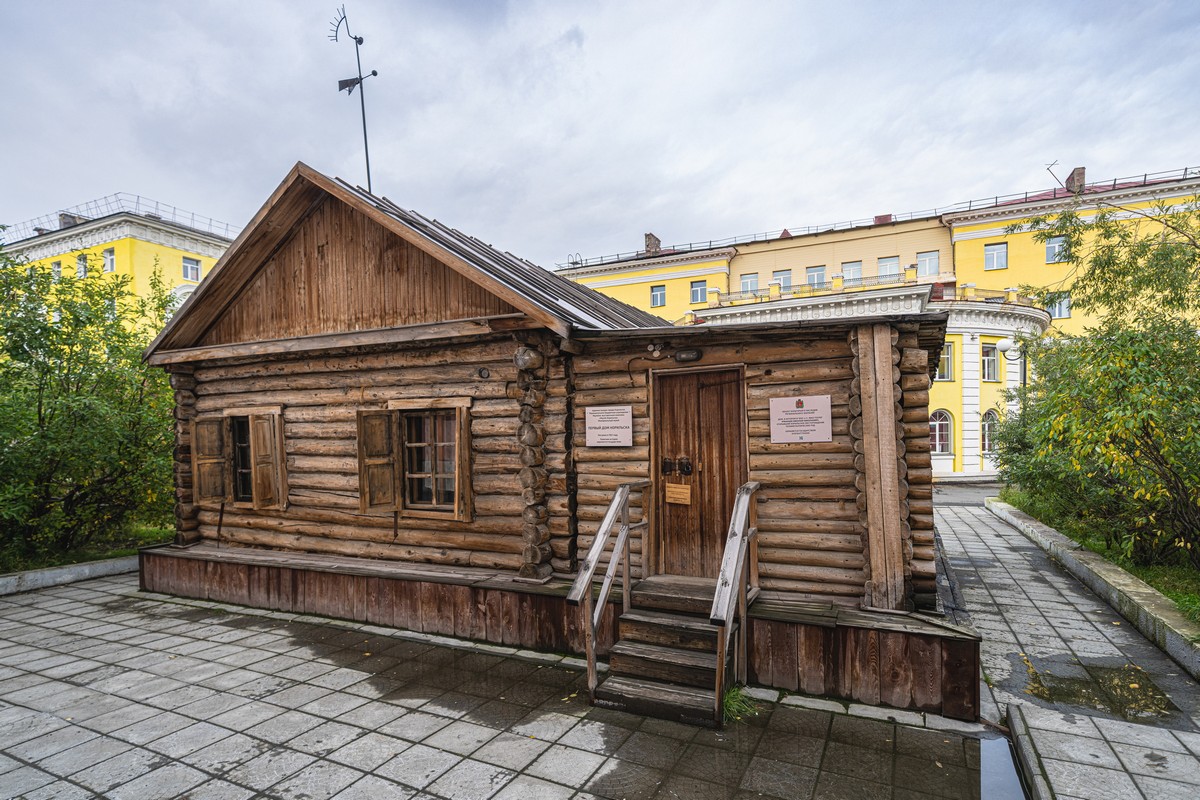 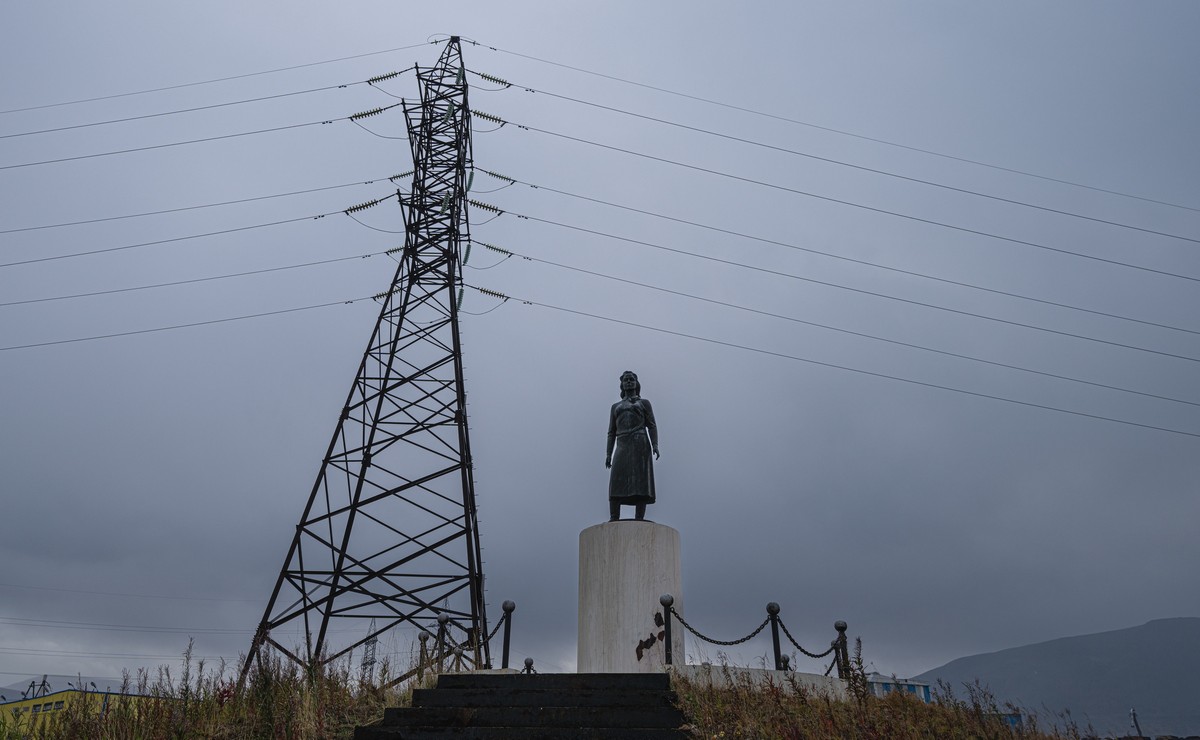 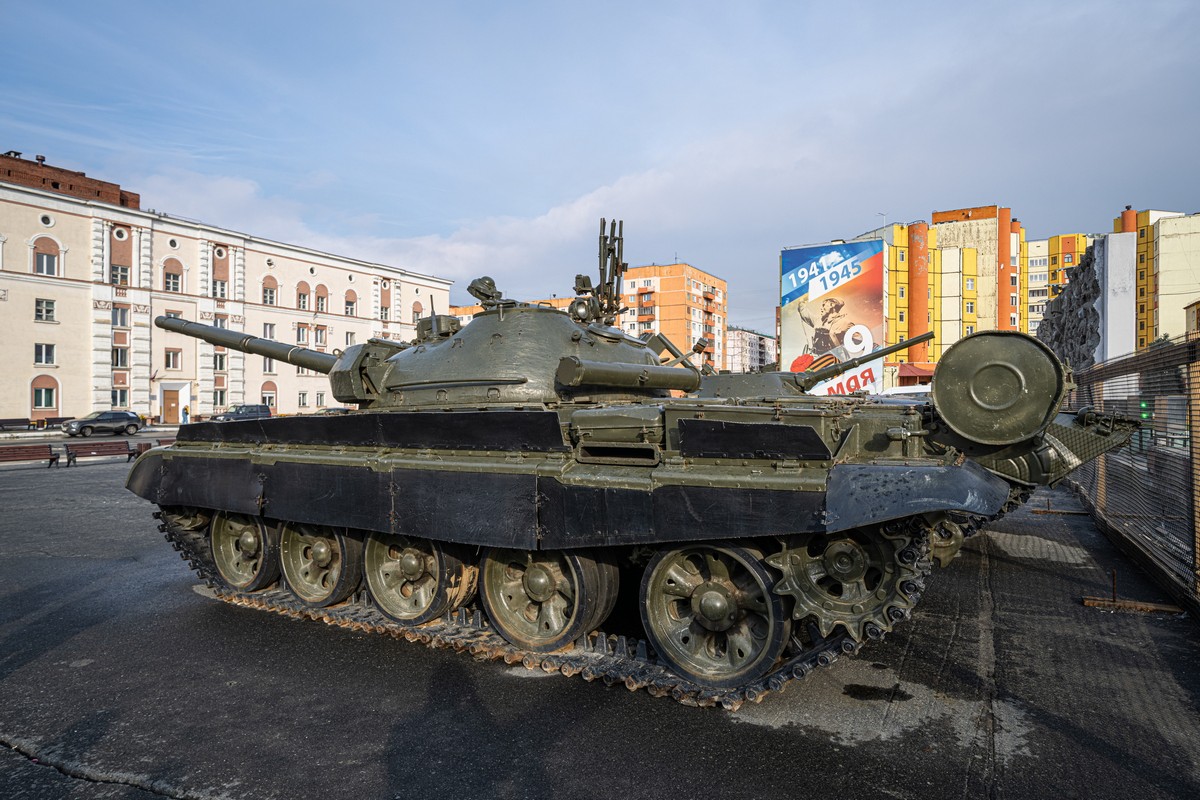 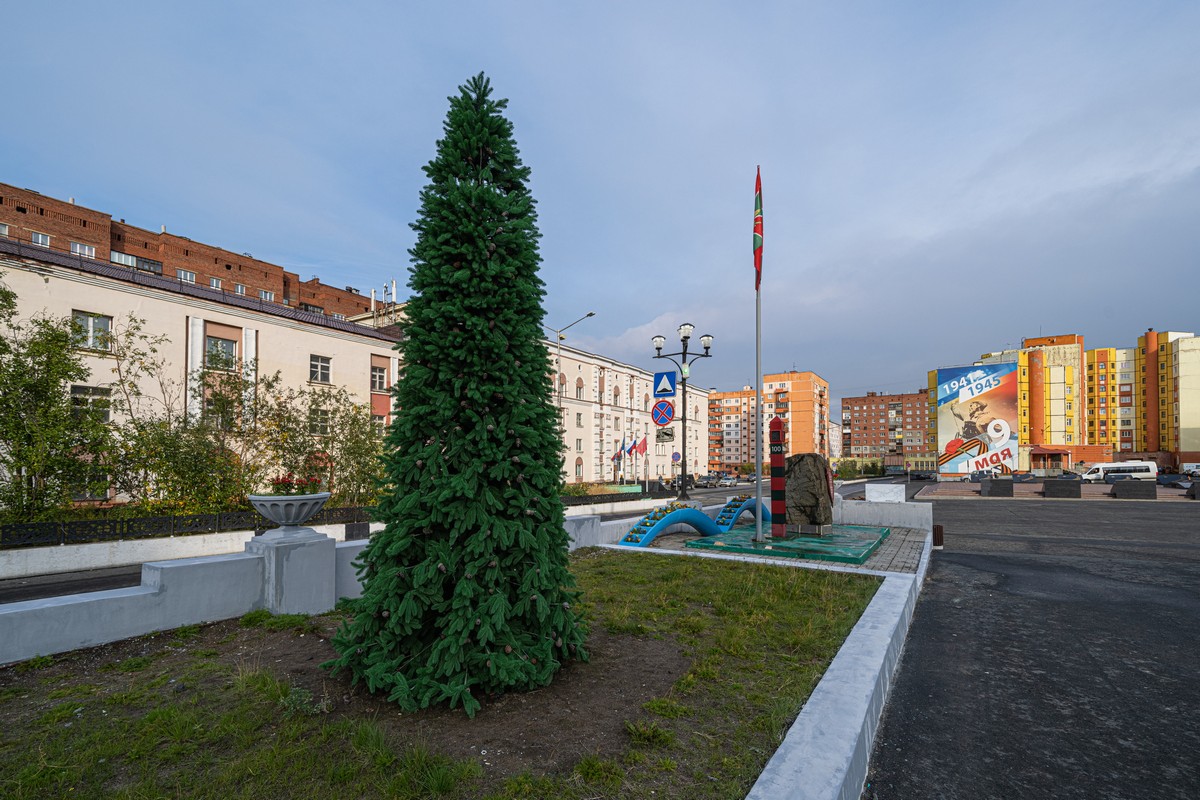 A rarity for me, but I have to mention cuisine this time. The borsch here was just so darn tasty! And look at how it’s prepared – in hollowed-out round loaves of bread, and with cold meats on… more bread (aren’t you supposed to eat the “bowl”?!), plus garlic and red pepper (and the inevitable sour cream) on the side. Yum! I just gotta get back to Norilsk!…

…No, I’m not joining the Instagram generation’s fascination with the food one eats, but this sure needed mentioning!

Much like in Australia and Tasmania, the local grisly history in Norilsk isn’t forgotten. There’s a memorial to the Norillag prisoners who helped build the city and all its industry and who died doing so: 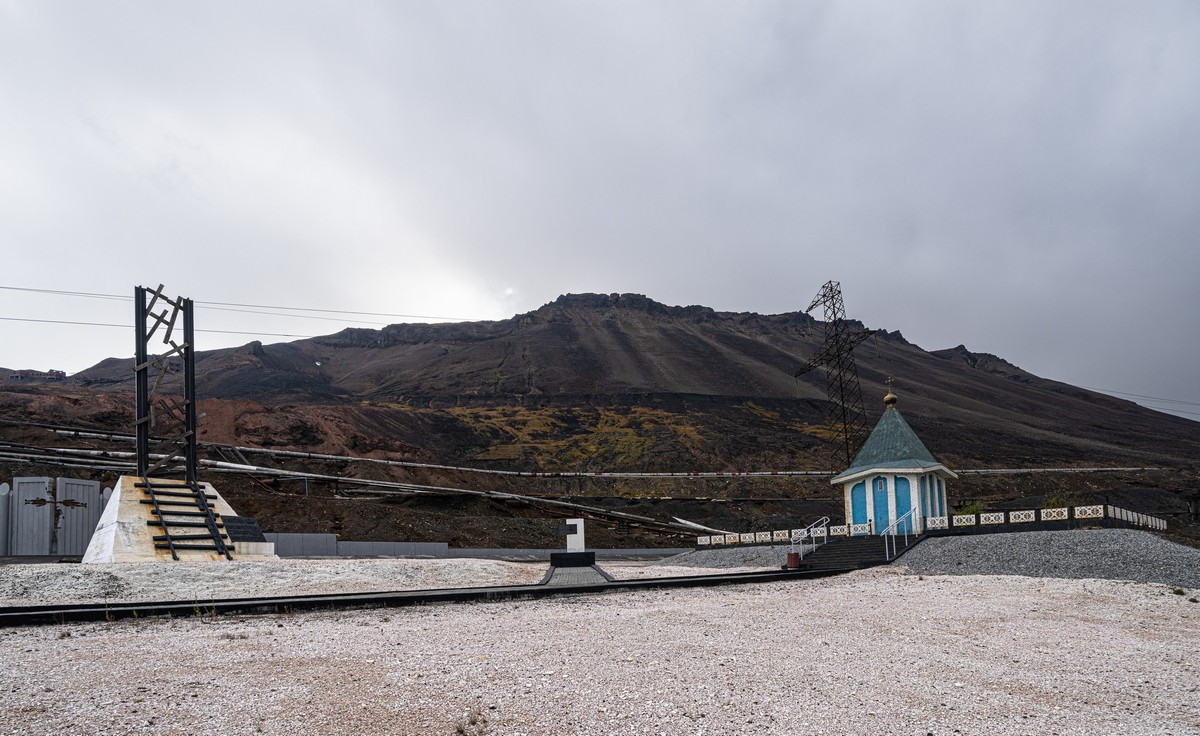 This is a monument to former Polish inmates (how did they wind up here? The mind boggles) -> 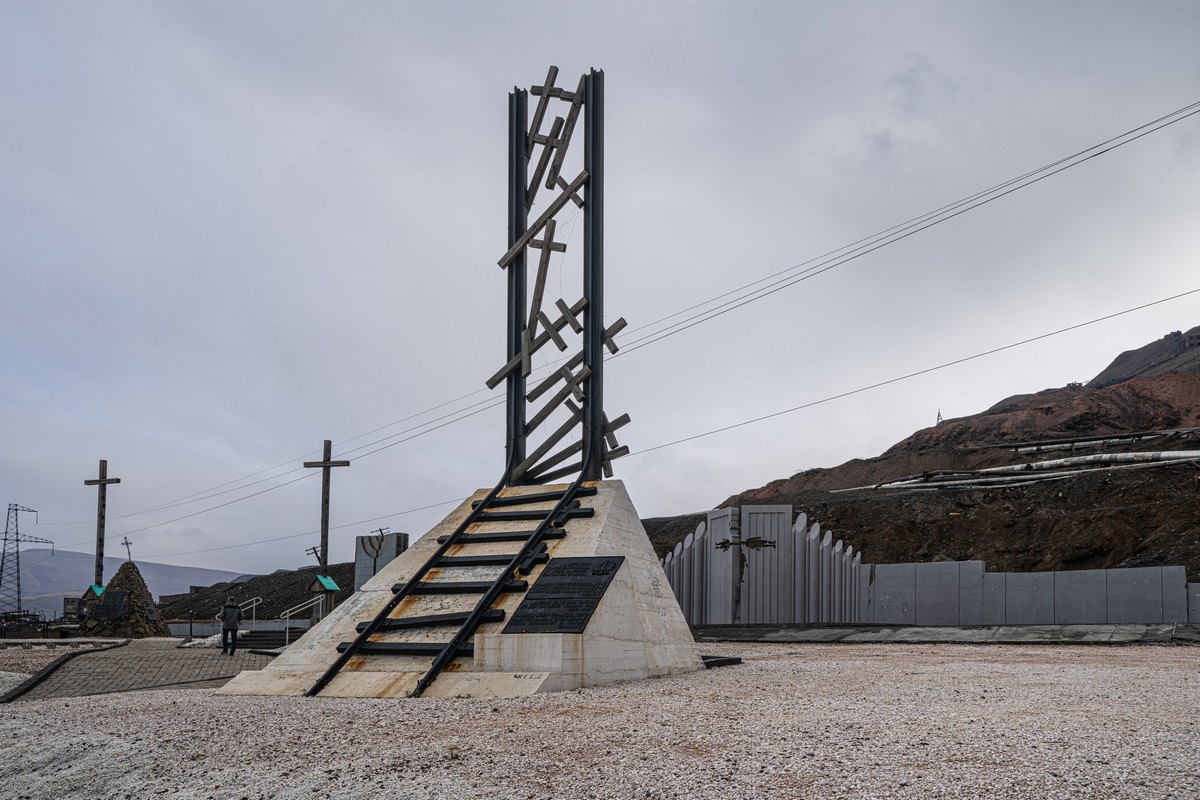 Here’s a monument to Japanese prisoners of war: 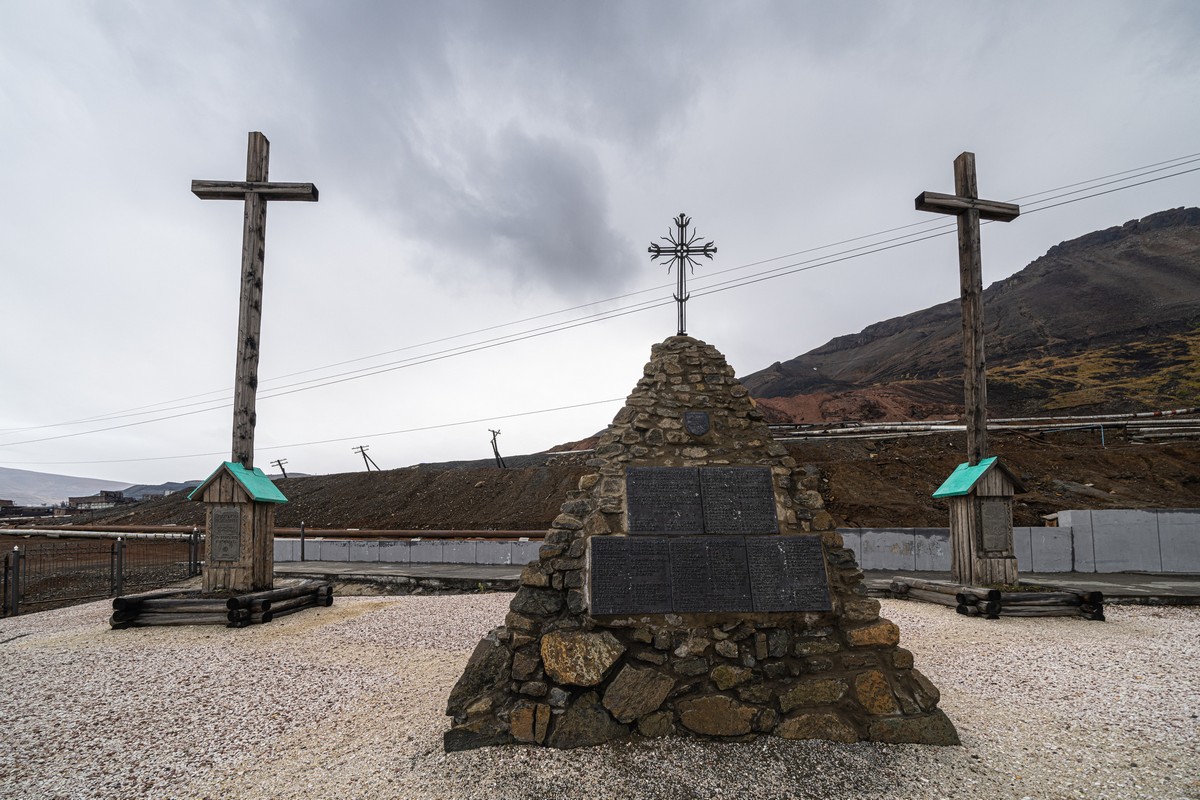 So those were the “international” inmates. Locals “joke” that if all the names of Russians were to be written on a monument – they simply wouldn’t fit :0(.

The views from the memorial: 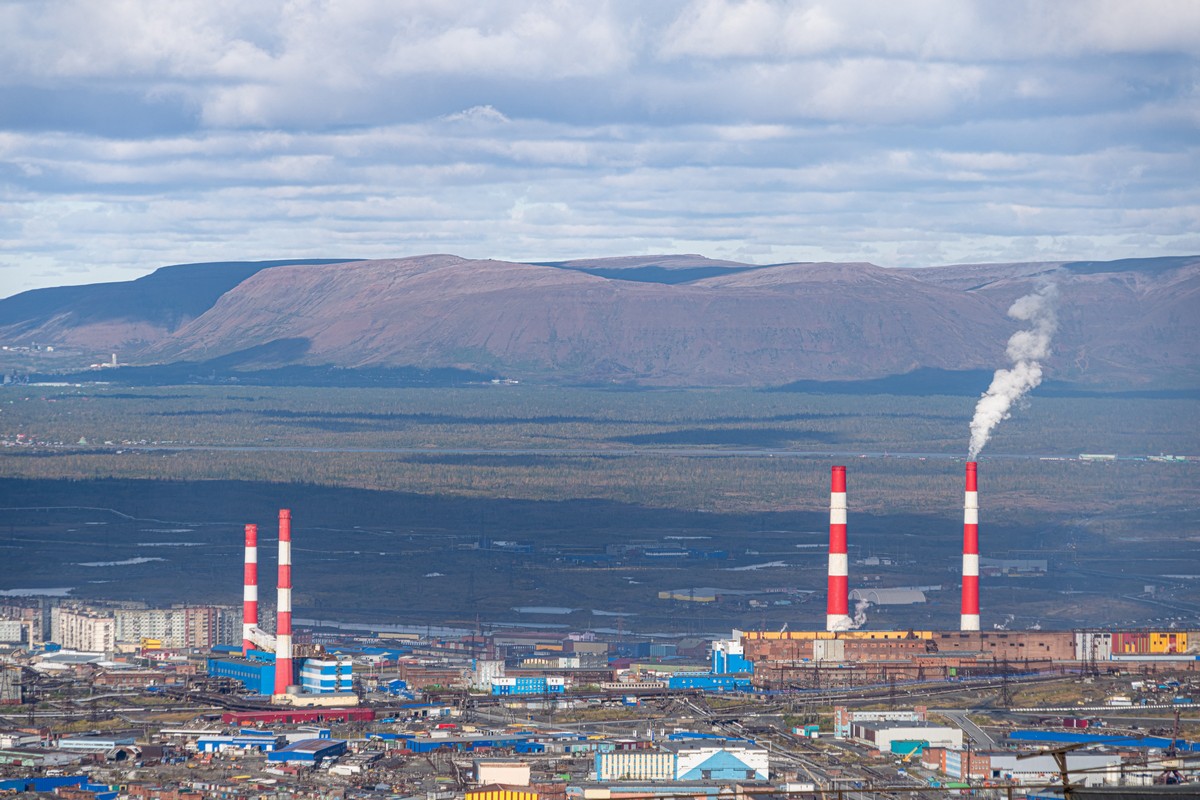 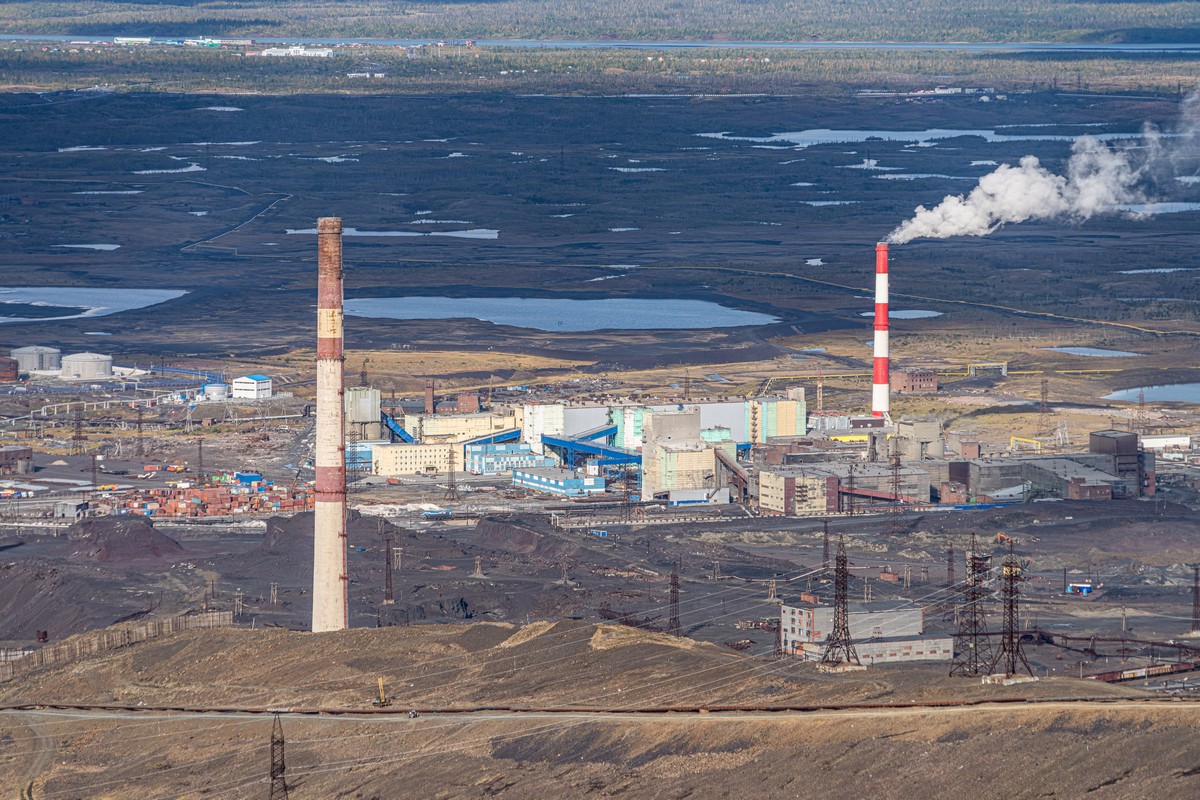 In the foreground – the closed nickel plant: no longer smoking -> 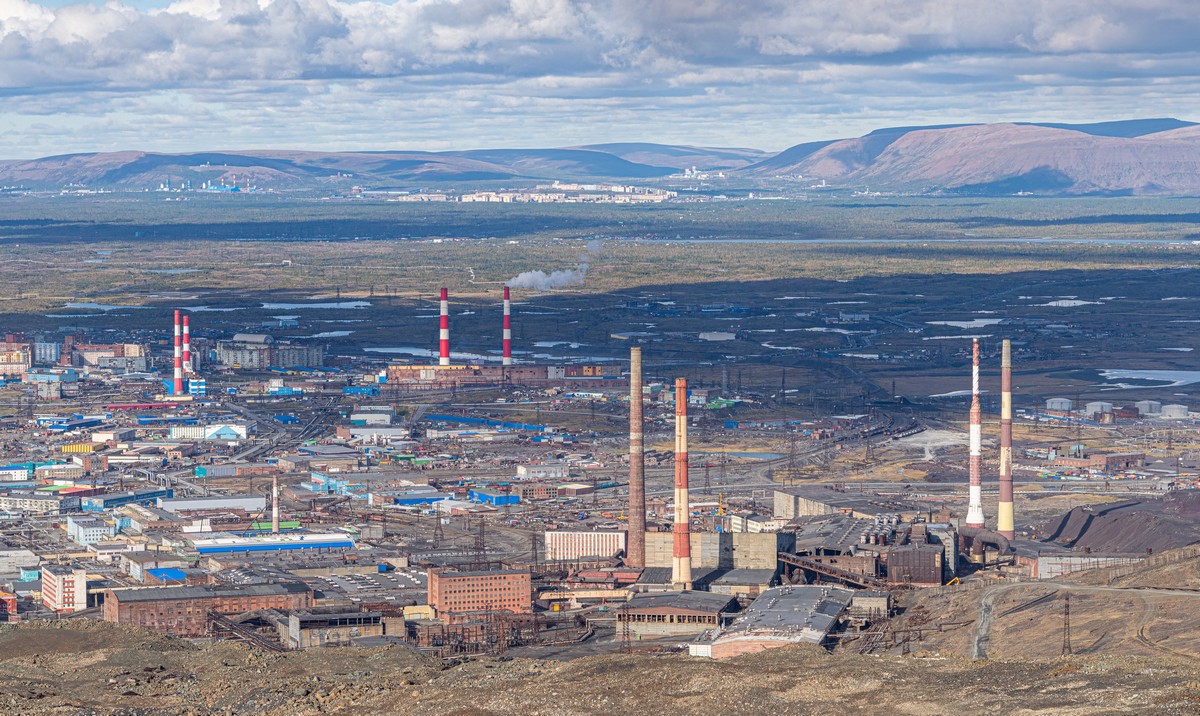 And that was that – walkabout: done. Next up was the working-industrial segment of our visit to the city. But that’s for my next post…

The rest of the pics from Norilsk are here.