I’d been planning on getting myself in early September to the Far North industrial city of Norilsk. I’d a chock-full itinerary planned, including giving speeches, business meetings with the management of our highly esteemed customer, plus of course a spot of tourism: checking out the main natural must-see of the region: Putorana Plateau.

At least, like I say: that was the plan. But then Kamchatka-2018 put paid to all that – six weeks with a leg in plaster. So I had to put the trip off. But only I had to postpone it: all the others in our delegation still went. And they had a whale of a time, by all accounts.

Well one of those accounts I’ll give you here: that of D.Z., one of my most-regular travel companions. Herewith, his short essay,plus photos.

(Note (from me): Unfortunately there are no pics of Putorana. Much like what happened most of the time this summer in Kamchatka, the weather turned real bad – not fit for flying. So there was to be no helicopter flight to the Siberian Traps, which incidentally came about around 250 million years ago as the result of a mega volcanic eruption. Btw: that eruption was one of the most global geo-catastrophes this planet of ours has ever seen: it changed its climate, and brought the Paleozoic Era to a close while ushering in that of the Mesozoic and its all its dinosaurs. Remnants of that prehistoric cataclysm can today be found around 100 kilometers from Norilsk, but are rarely accessible to tourists due to the habitually terrible weather conditions above the Arctic Circle. Oh well: next time…

For someone who’s never been to Norilsk, the place is a mere city in the Far North of Russia. However, a taxi ride from its airport around the territory and to its downtown changes this visualization: Norilsk is a more than a mere city; it’s a whole industrial district (one of its official titles is the ‘Norilsk Industrial District’), which covers the wide expanse of land from the Yenisei River to the Putorana Plateau. And its residential neighborhoods – with a population totaling nearly 200,000 – dot this industrial landscape to almost resemble oases.

The first impression you get while still in the taxi from the airport is that this ‘Industrial District’ could well have been the inspiration of the Strugatsky brothers‘ science fiction works like The Doomed City or Roadside Picnic (haven’t read them? You really must:). Harsh industrialized landscapes, smokestacks, pipelines everywhere, muddy wasteland instead of perhaps lawns or parkland, austere box-like heavy industry buildings and installations; grayness, drabness, gloominess – and all under a gentle drizzle and sun-less sky. As Bugs Bunny once said: “It’s a nice place to visit, but I wouldn’t wanna live there”.

We approach the city districts, which remind one of the walls of a mediaeval castle from a noir adventure movie. However, as you enter those ‘walls’ the impressions begin to change…

Now, no one would be expecting this to be a picturesque, neatly trimmed and manicured city like what you sometimes get in more temperate climates in, say, Europe or North America. But then, those kinds of cities weren’t built from scratch from 1935 on permafrost in the most extreme climatic conditions possible on the planet. This is, after all, the northernmost city in the world (with a population of more than 100,000) – one of only two large cities in the continuous permafrost zone (the other being Yakutsk). All the same, given the impossibly harsh location, oh how they did a top job in still constructing a city to be comfortable in and whose downtown looks not so bad at all:

One of the first things I noticed in the city was a complete absence of water pipes and sewerage pipes and electric cabling. I was expecting Norilsk to be another ‘city with intestines on the outside’, like the inhabitants Yakutsk (like I just mentioned – the other large city built on permafrost) fondly refer to their home city. No, here, there are three tiers of underground utility lines (electricity, water, sewerage) along the central sections of roads here, with greenery atop. Good idea ). 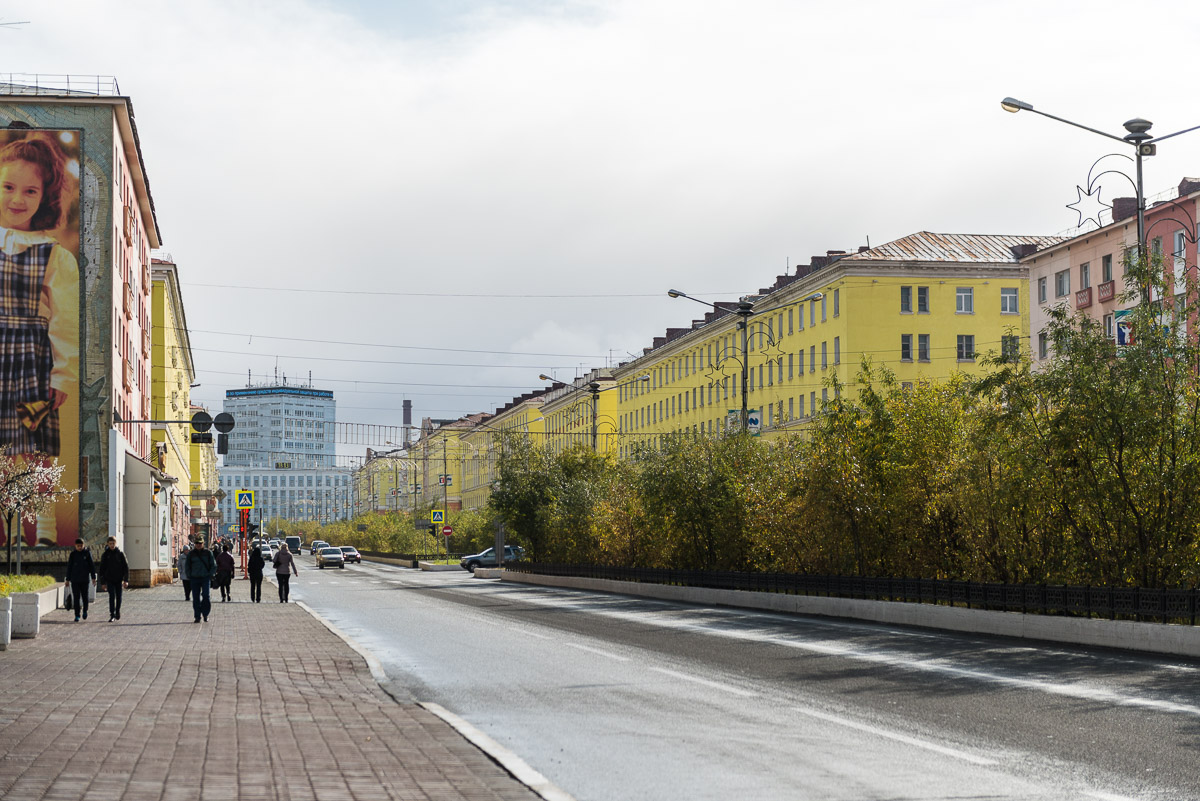 The city’s roads are most decent. Not one was a gravel-sprinkled affair; all were either fully asphalted or paved. I think that might be because of the climate here: A lot of snow falls here; snow melts; things get very wet indeed; no firm surface underneath it all? > quagmire. Hardly the solid foundation an industrial powerhouse needs.

Another distinguishing feature I saw here was how the apartment blocks were positioned: right next to each other, with just thin gap between them for folks to walk through single-file. Apparently this is to reduce levels of wind and snow in the city, of which there’s plenty almost always.

Apart from that, the overall town planning seemed to follow the logical Barcelona style: all very geometrical and with very wide streets. And as in many northern cities, the buildings are painted bright colors, and street lighting is similarly bright to counter the long dark hours in these extreme latitudes.

I’ve been telling you recently how bad the climate can be in Kamchatka. Well, compared to Norilsk, Kamchatka is delightfully temperate! Locals told us how the during the May Day holidays the mercury can go below -30°C. We were invited to come back to Norilsk for some downhill skiing for the May holidays (!) “if it’s not too cold next year”!

In early September, while folks down in Moscow (at least this year) are in t-shirts and shorts, up in Norilsk everyone’s dressed as Muscovites are in January. Nights are freezing cold and there’s a constant wind – no matter how well the city was planned. I just wonder what it must be like in the deep of winter! So yes: there’s Novosibirsk, Krasnoyarsk, Irkutsk, Khabarovsk and other Siberian metropolises – but these are almost southern cities compared to Norilsk – the Northern city with a capital N!

And now for the fly in the ointment: ecology.

The whole city and its Industrial District was built for and around its mining / nonferrous metallurgy industry. And it’s not the cleanest heavy industry site in the world. First of all it’s one of the largest nonferrous metals production centers in the world (Nornickel produces 40% (!) of the world’s palladium, 12% of its nickel, and 11% of its platinum). Also, back in the middle of the last century it was decided that the residential areas should be right next to the mines/plants – so yes, the ecology of those residential areas is bound to be poor. The internet states that Norilsk is one of the most polluted cities in the world; one result: cancer rates here are twice as high as the world average.

A few words about the manufacturing that goes on here…

We had an excursion of the city’s copper plant (which produces 55% of Russia’s copper). What a sight! But also: what a shock! As soon as we got there we could tell that the air was full of exhaust fumes. We had to quickly don gas masks.

Nornickel exemplifies a particularly Soviet phenomenon: it is a city-forming employer, or, even – a region-forming employer: basically the whole city/region was built up around this one mammoth enterprise. Here practically everything is Nornickel: gas extraction, electricity generation, airport, airlines and more.

The number of roads to get to and from Norilsk from ‘mainland’ Russia (i.e., further than neighboring towns) is… zero! So the only option is to fly there (it’s also accessible year round by sea (with the help of icebreakers) via the port town of Dudinka).

As regards regional cuisine there are many original dishes based on the locally-caught fish and deer. Supplies of foodstuffs are excellent – the supermarkets here offer assortments on a par with any other Russian city west of the Urals. Oh, and the city’s beer – delicious! 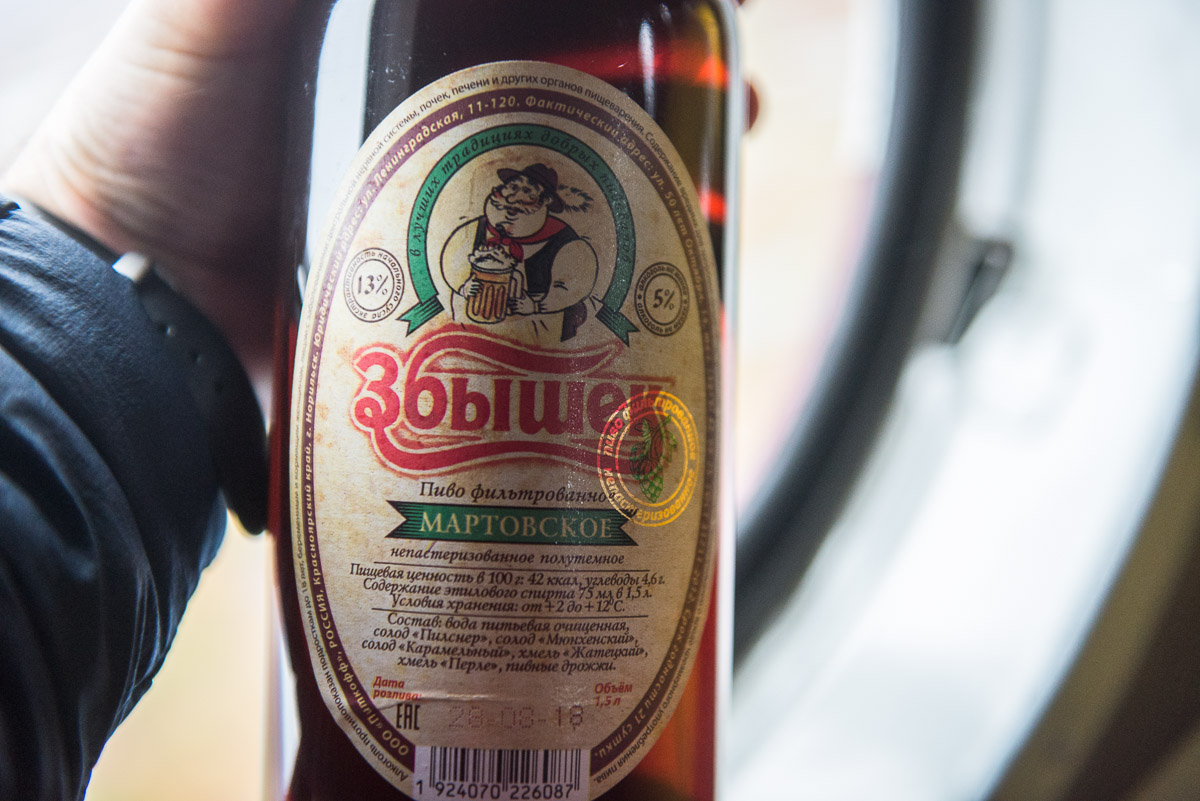 In closing, a few pics of the surrounding tundra. Impressive:

As mentioned – the weather made a trip to see the Putorana Plateau impossible. That will have to wait for another visit, which I hope this time I won’t miss due to force-majeure circumstances ).