The city of Khabarovsk, at least in the summer, is a most charming city – perfect for a long stroll. In the winter I imagine it’s not quite as pretty or walkable – all cold and icy and snowy; but then I think back to a wintery (-50°C!) Yakutsk, and realize Khabarovsk might be just as charming in the winter, albeit in a very different way. But we were here in the summer, and, after not having seen much of it over the last few weeks in the Kurils, the sun was out – and staying out ->

The city’s embankment is a goodie:

And just about everything else is also goodie:

Like anywhere, some places could do with some repairs and a lick of paint -> 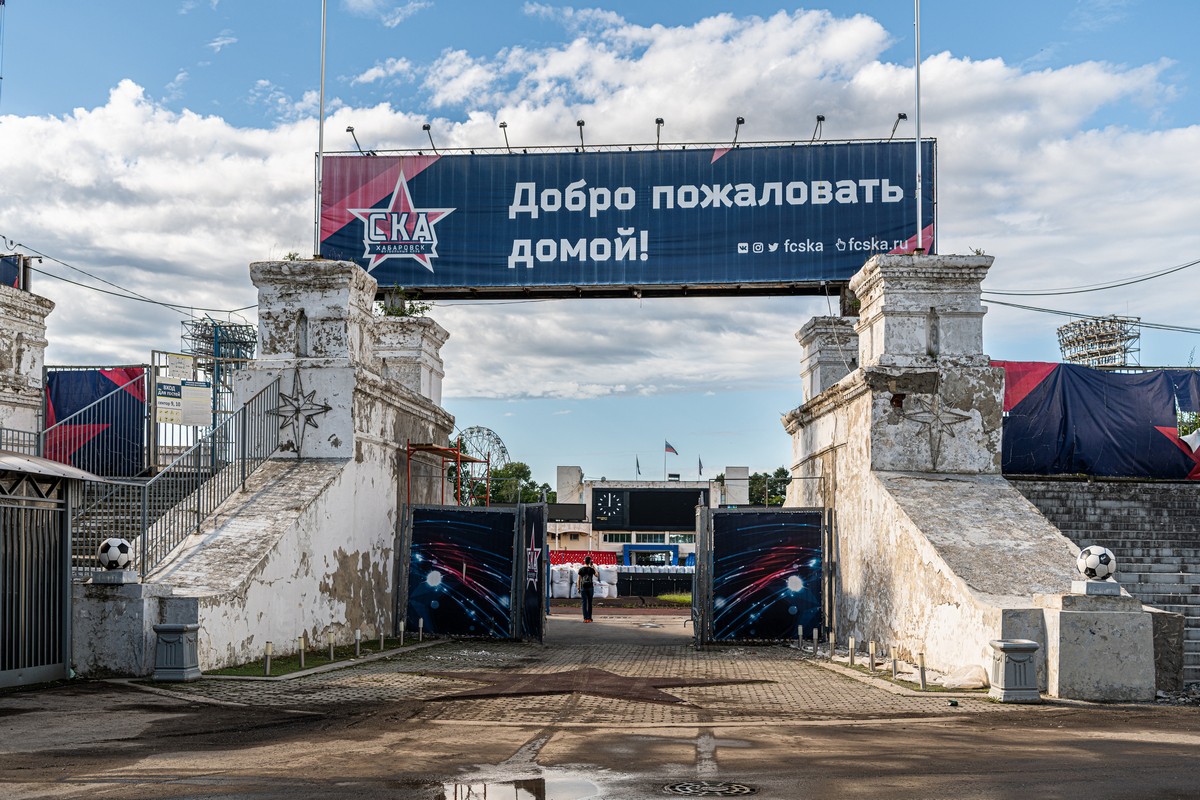 Old Soviet statues sit in the corner of a park… 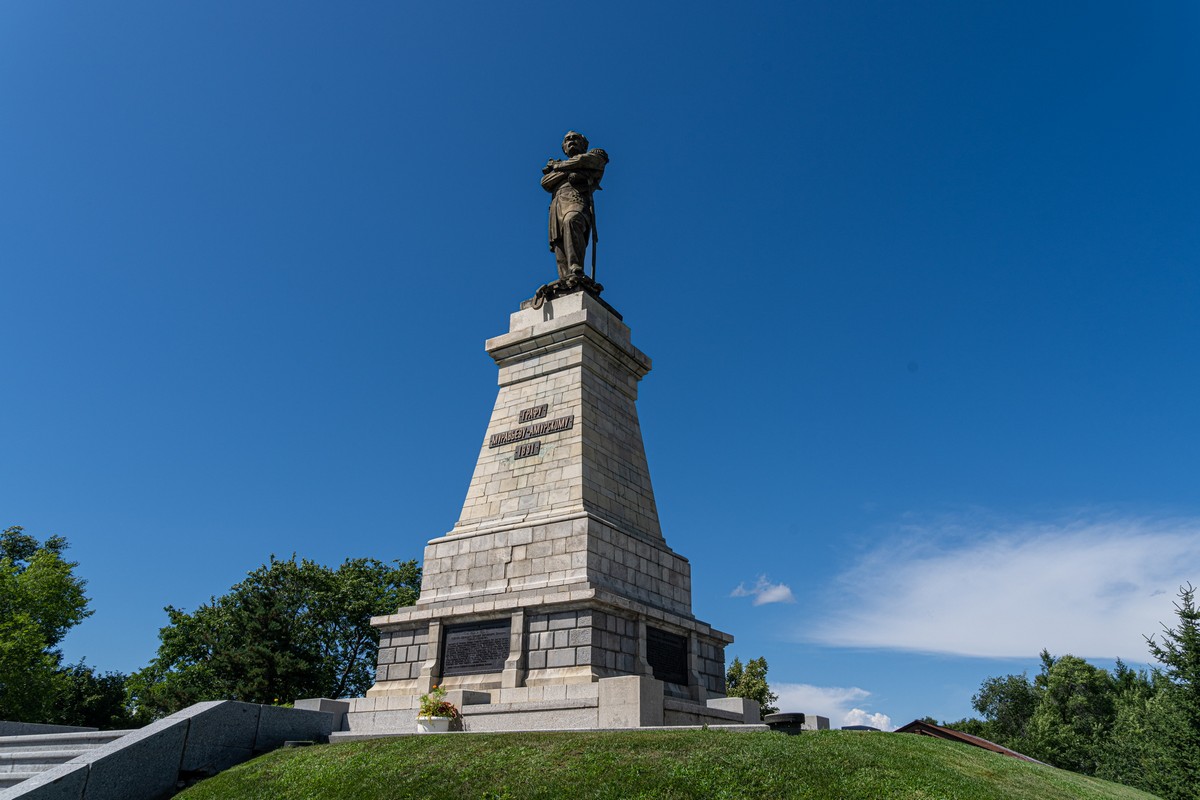 We took lunch in the city’s Intourist Hotel. What is this, a spy novel from the seventies? Inside – it seemed it was (the service was as bad as it was in the CCCP); outside too: check out the individual air conditioning units outside every room :) -> 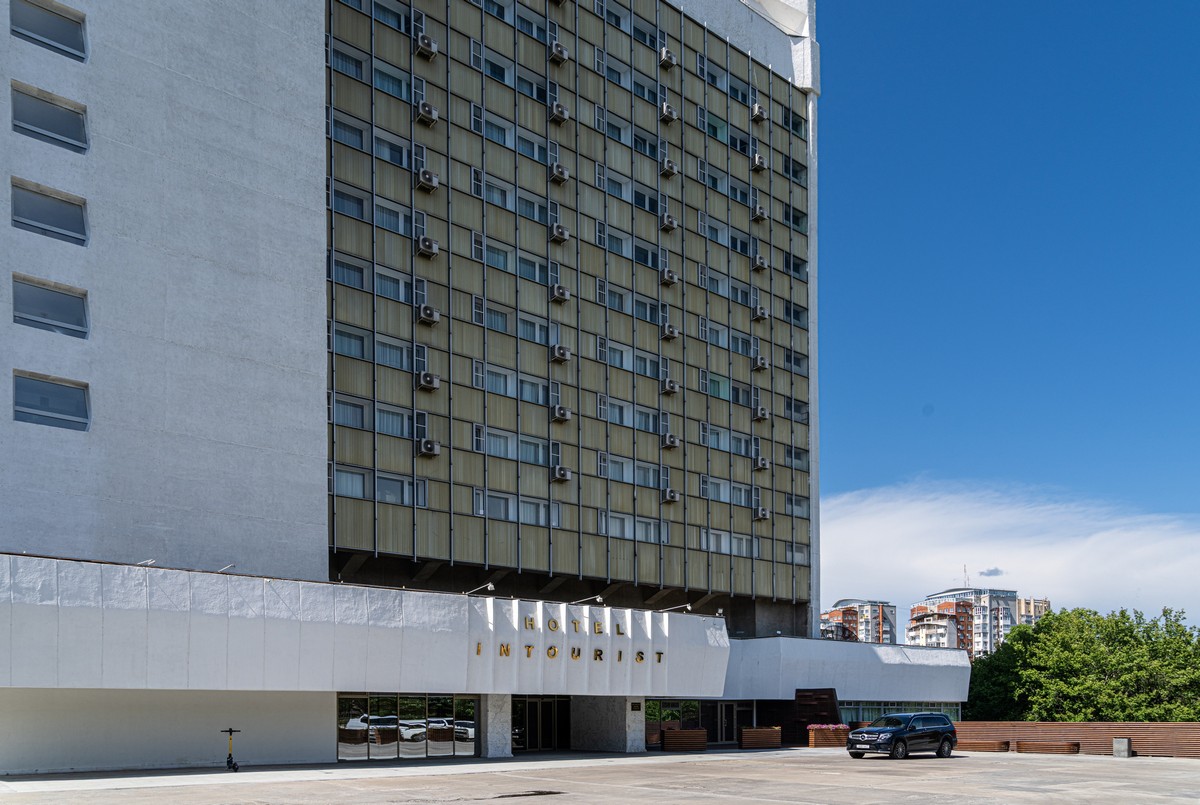 How bad was the service? Get this: we had to ask waiters six (6) times before they’d bring us each a pint of beer! So you can imagine, when the beers did finally arrive – after 20 minutes! – the reaction was suitably euphoric!

It was then time to inspect one of the main places of interest of the city – Khabarovsk Bridge: 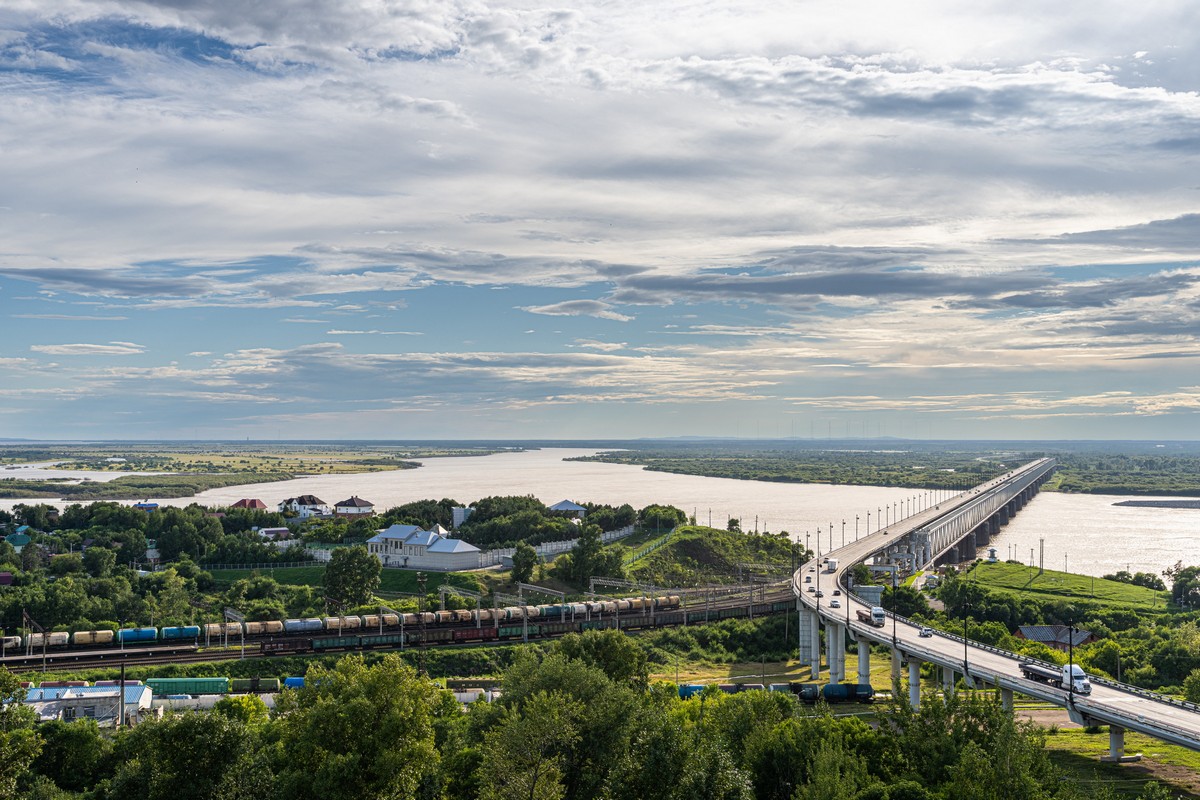 To get the best view of the bridge you need to climb up to the top of this unfinished derelict building on a nearby hill: 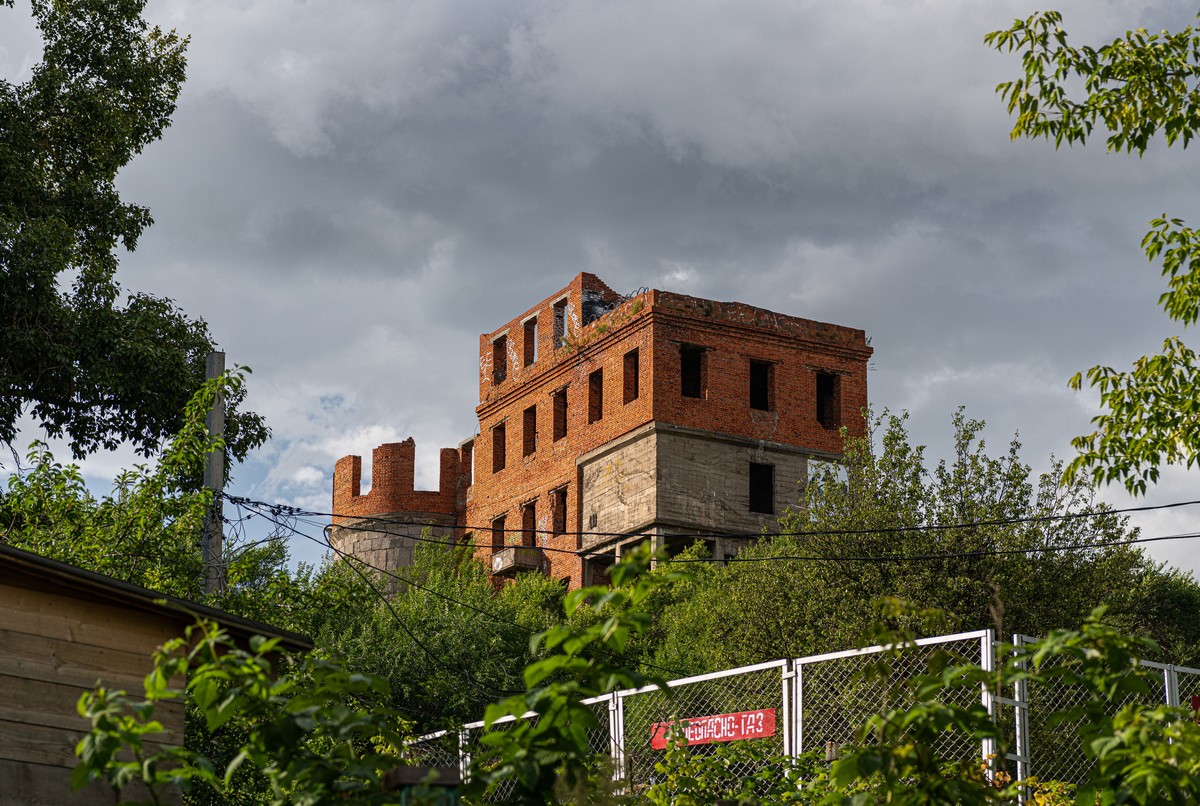 No one seems to know much about this mysterious building. Its construction began in the 1930s, but no one knows for whom or what for. There are many theories, but none’s been confirmed. Like I say – a mystery; an ugly one too. Ugliness turns to beauty though as you get to the top and turn around.

Wait – I recognize that…

Two more mysterious – at least to us – installations located next door. What are they? -> 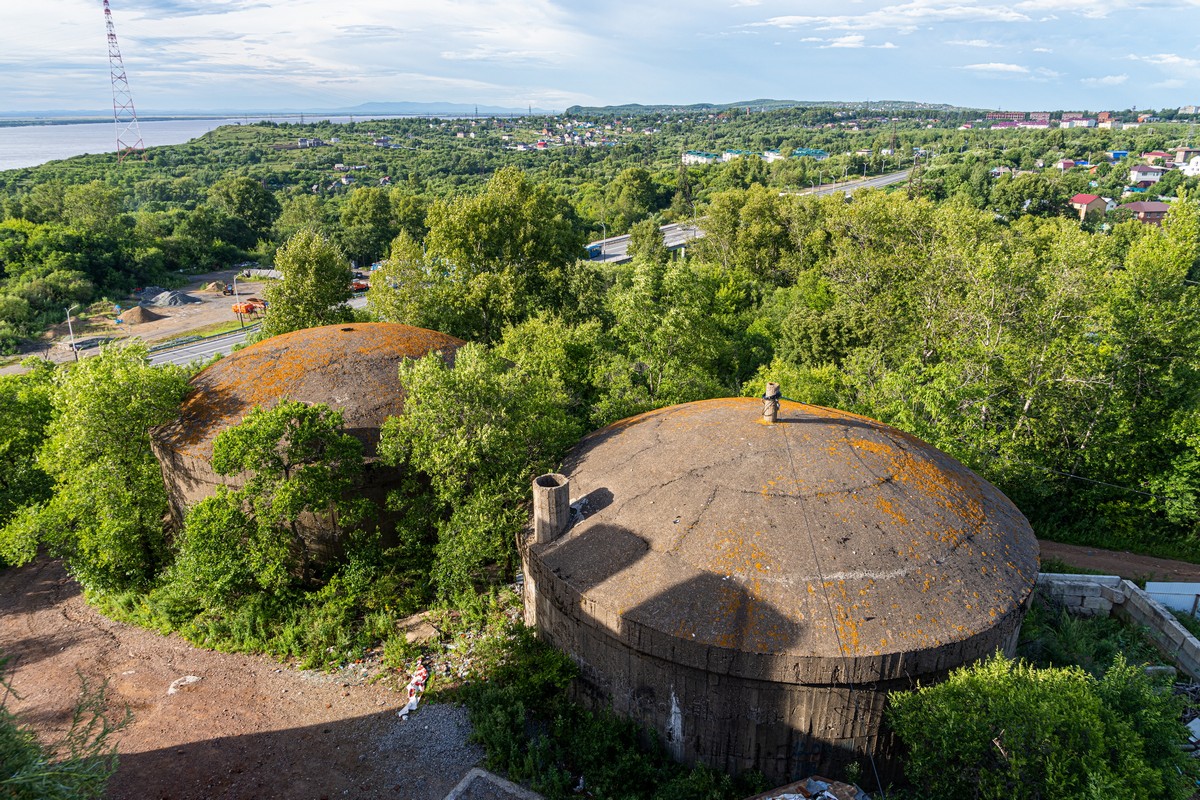 Our last stop on our whirlwind tour of the city – the Museum of the Khabarovsk Bridge, or, as I’d put it – Bridges…

The first railroad bridge here was particularly advanced for its time (built in 1916), and it was logistically very difficult to build too, especially since the construction materials – particularly the girders – needed to be transported from the European end of the Russian Empire. After completion, they laid tracks of the Trans-Siberian Railway across it to connect with Vladivostok for the first time. 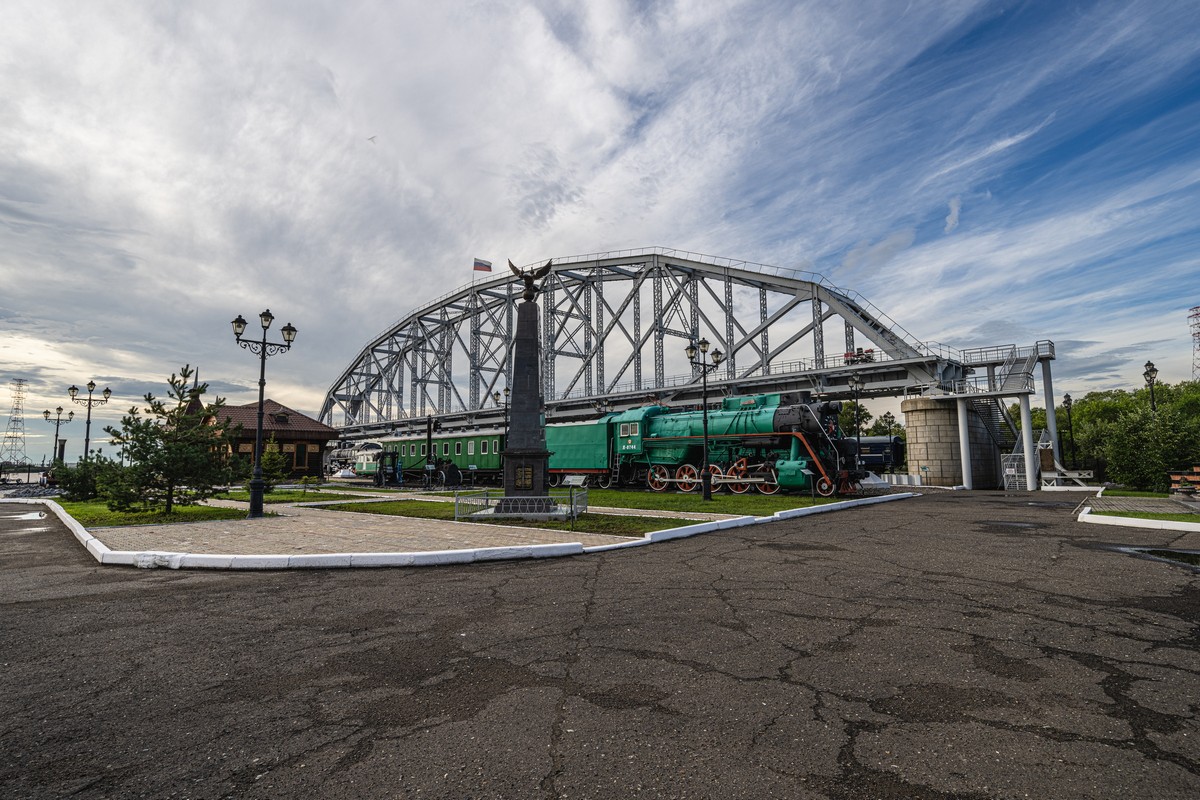 And here’s the new bridge, built this century: 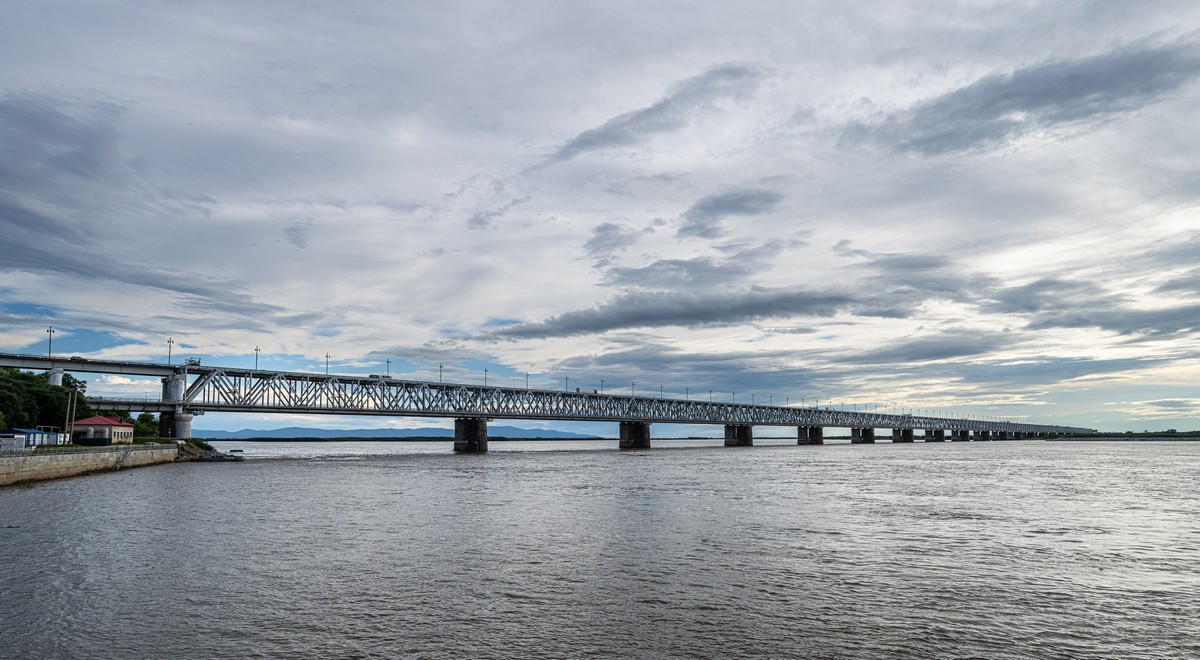 Btw, the new bridge takes both trains and motor vehicles across – on two separate levels. Before, cars had to take the ferry (in summer), cross the iced-over river (in winter), or be loaded onto rail decks. 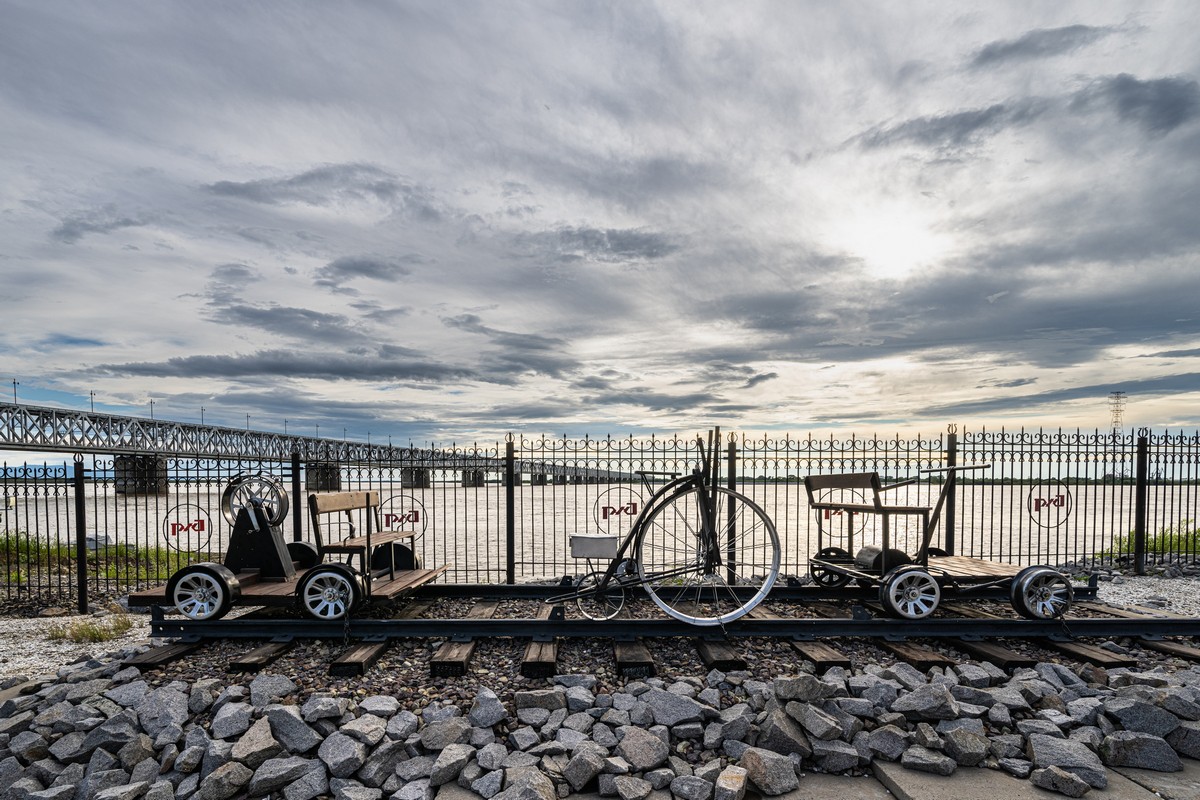 A copy of the old station: 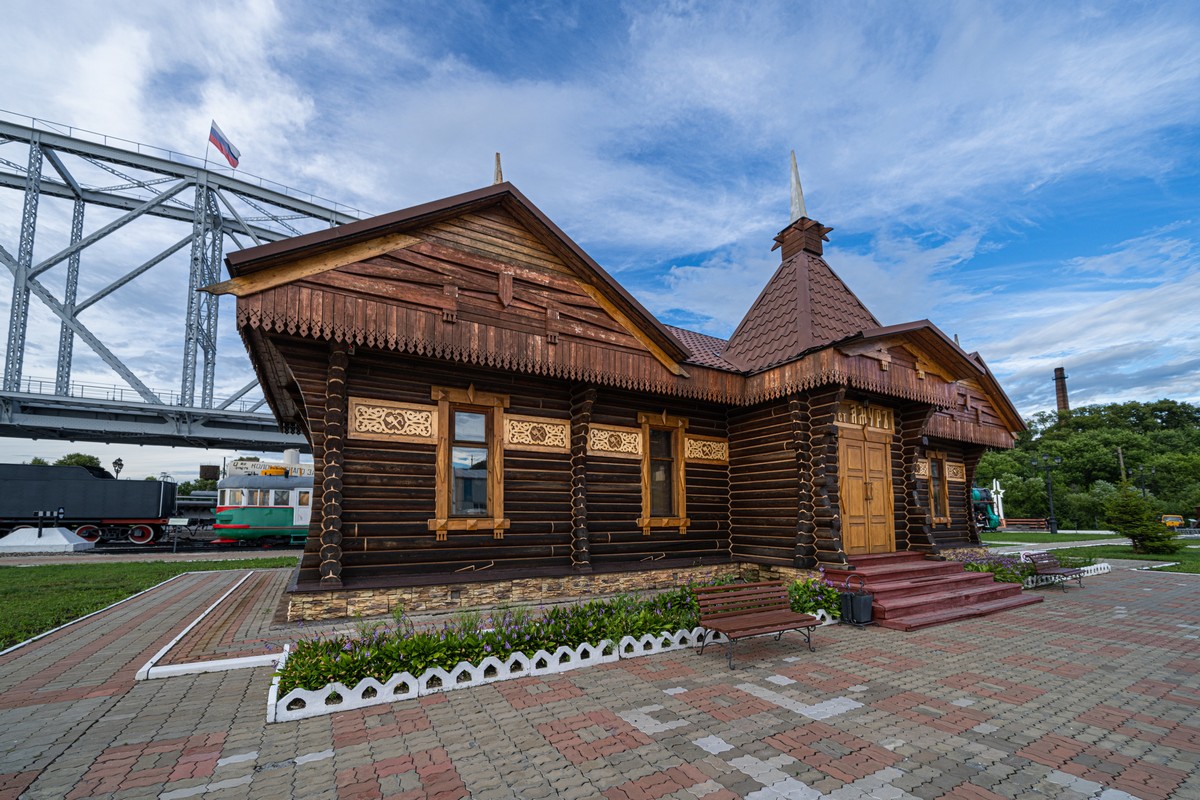 And the highlight is being able to get up onto a section of the original structure. Apparently the bridge can be rented for events; folks even get married on the bridge!

You can climb up onto or into some of the exhibits:

There’s more to see inside the old station, including loads of exhibits relating to the bridge’s construction and use. The museum in Tynda needs to check out how it’s done properly!->

Assorted pics from the museum: 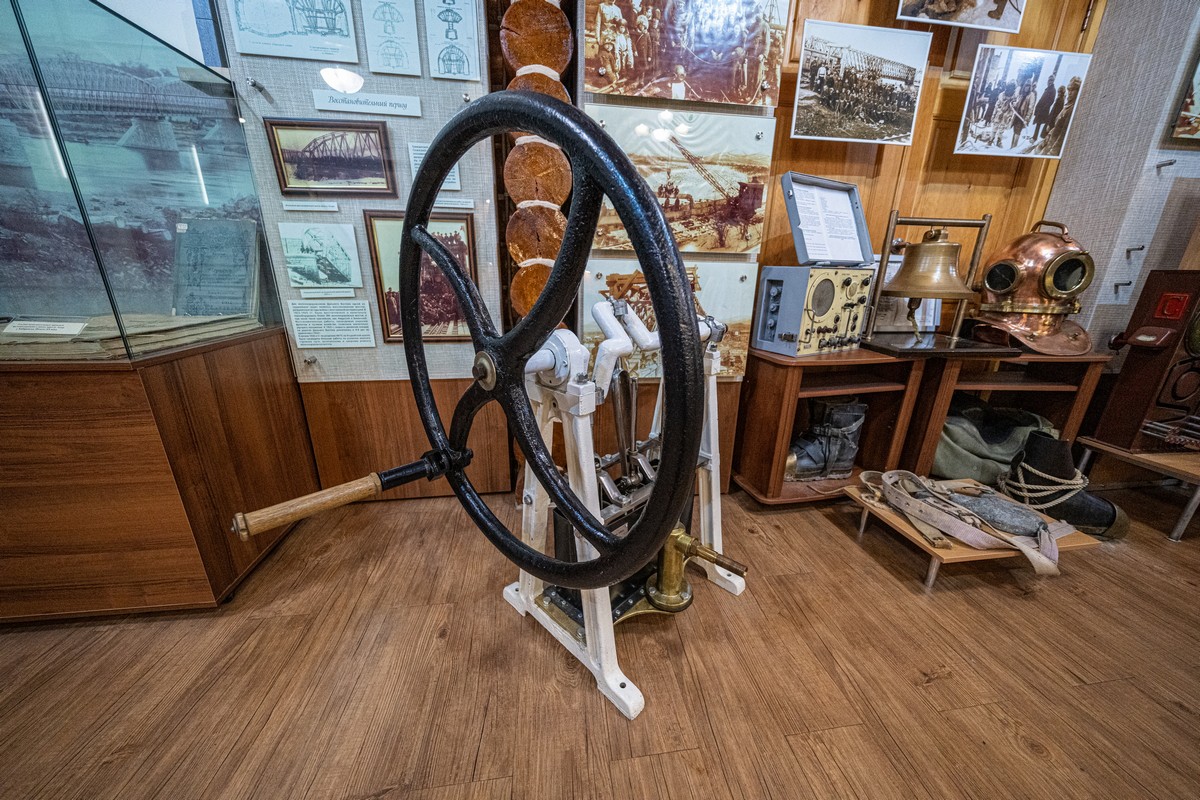 This here contraption – together with those batons there that were passed from stationmaster to train driver – was used for switching rails:

Meanwhile, it was getting late, dark and gloomy – beautifully! -> 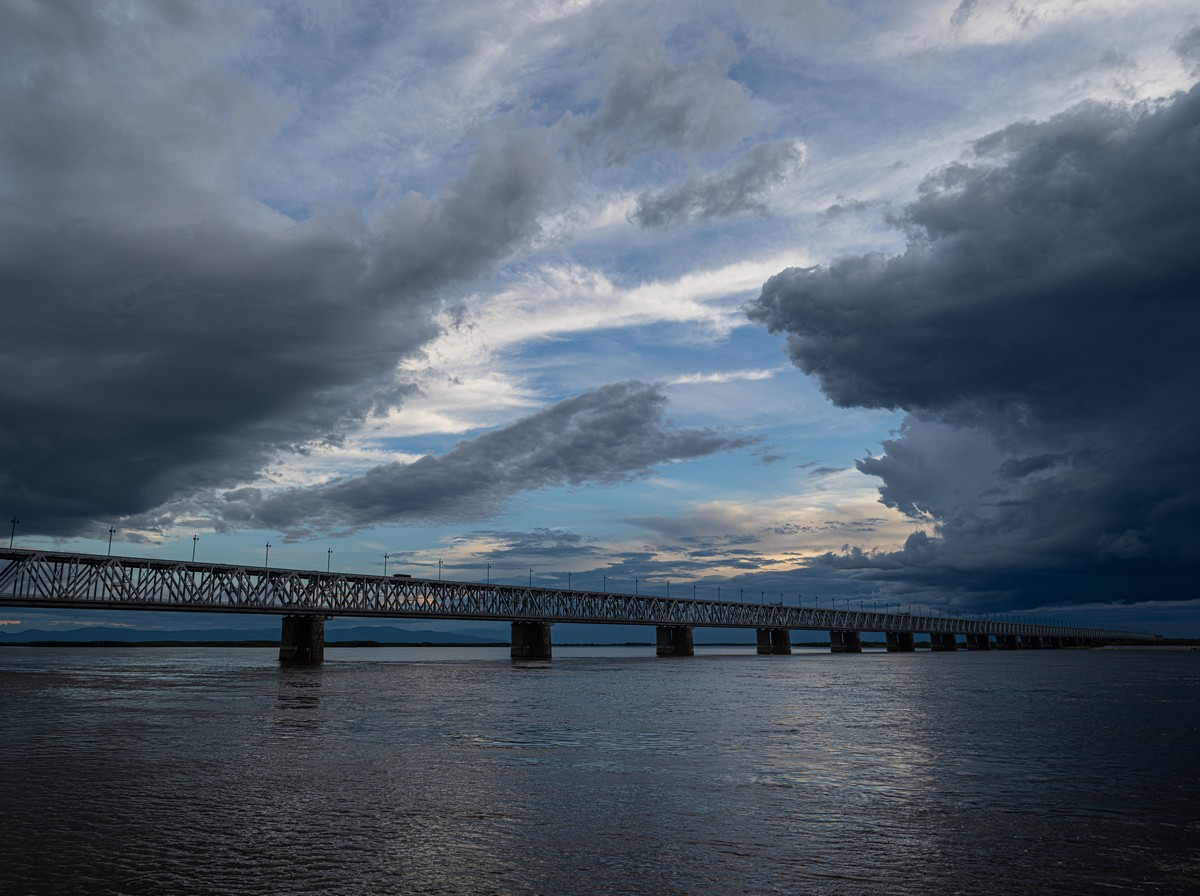 And then came a super sunset; apparently they’re super like this a lot here:

Closing thoughts on Khabarovsk – its streets were practically empty! Not the smallest of cities, but still – no one about. And later – around midnight, what with zero cars by that time on the roads, it resembled a ghost town -> 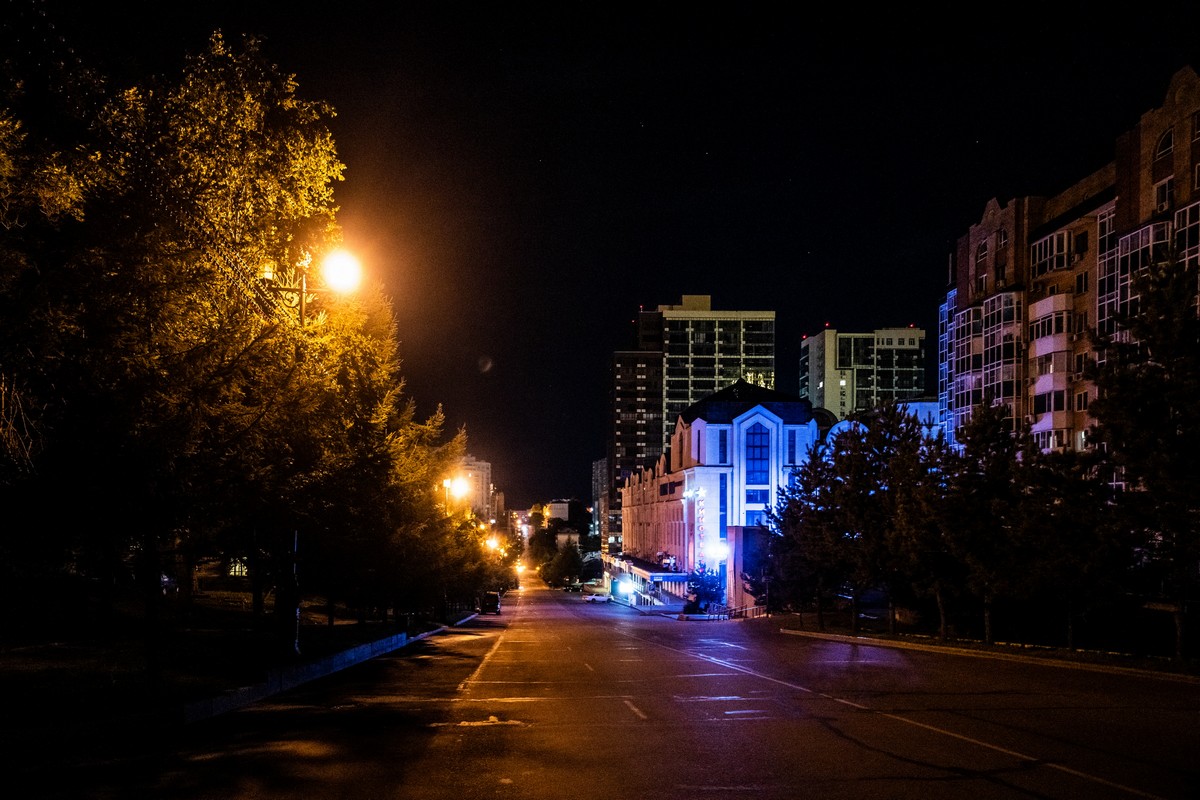 And that was that. Khabarovsk – done. Next up: airport, plane, long-haul back west. Goodbye Khabarovsk, goodbye far-east; till next time!…