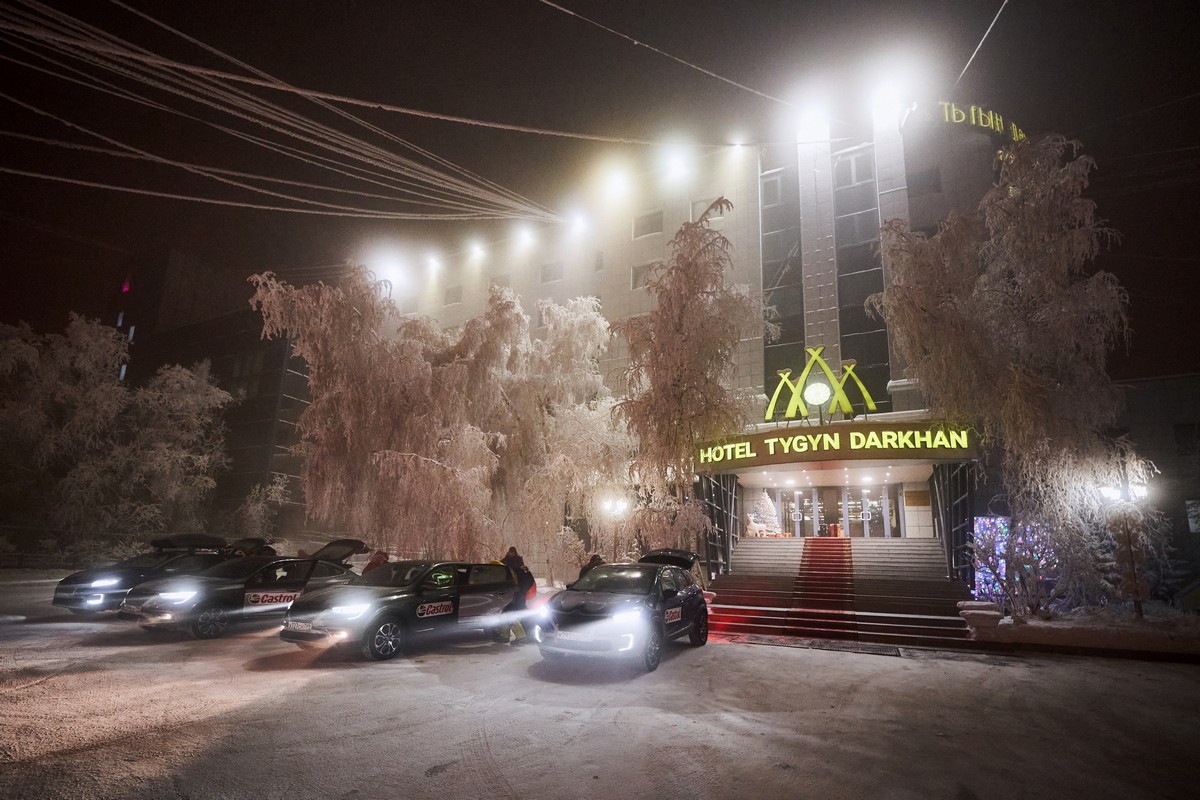 The unique city of Yakutsk. Unique since, well, where else do you get a large city (with a population of more than 300,000) that doesn’t even blink at -60°C, never mind come to a screeching logistical halt (as, say, a UK city can at… -6°C:)? And where else does it get so bitterly cold in winter, yet so swelteringly hot in summer – +40°C?! Like I say: unique. And extraordinarily… tough!

When we arrived the mercury showed -50°C – around about the average temperature for January! Not that we noticed really for we were straight into the warm hotel for some shut-eye after the long slog on the road. Come the morning – similar temperature. No matter: time for walkies!… And the first impressions? A city that’s completely white – with most everything coated in hoarfrost: 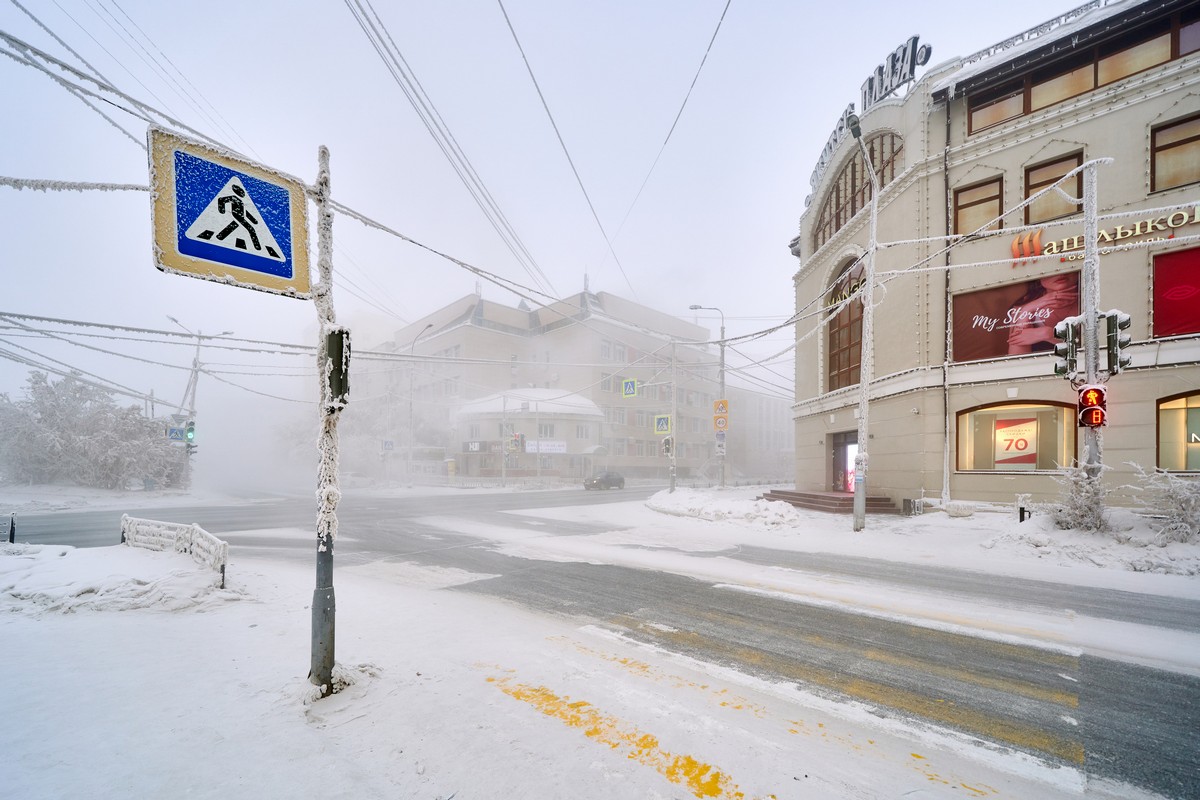 At night the scenes are just as impressive:

Minus fifty! And there are folks out for a stroll to the shops! There aren’t traffic jams (like in Moscow), but there are still plenty of cars on the roads. Life just goes on! 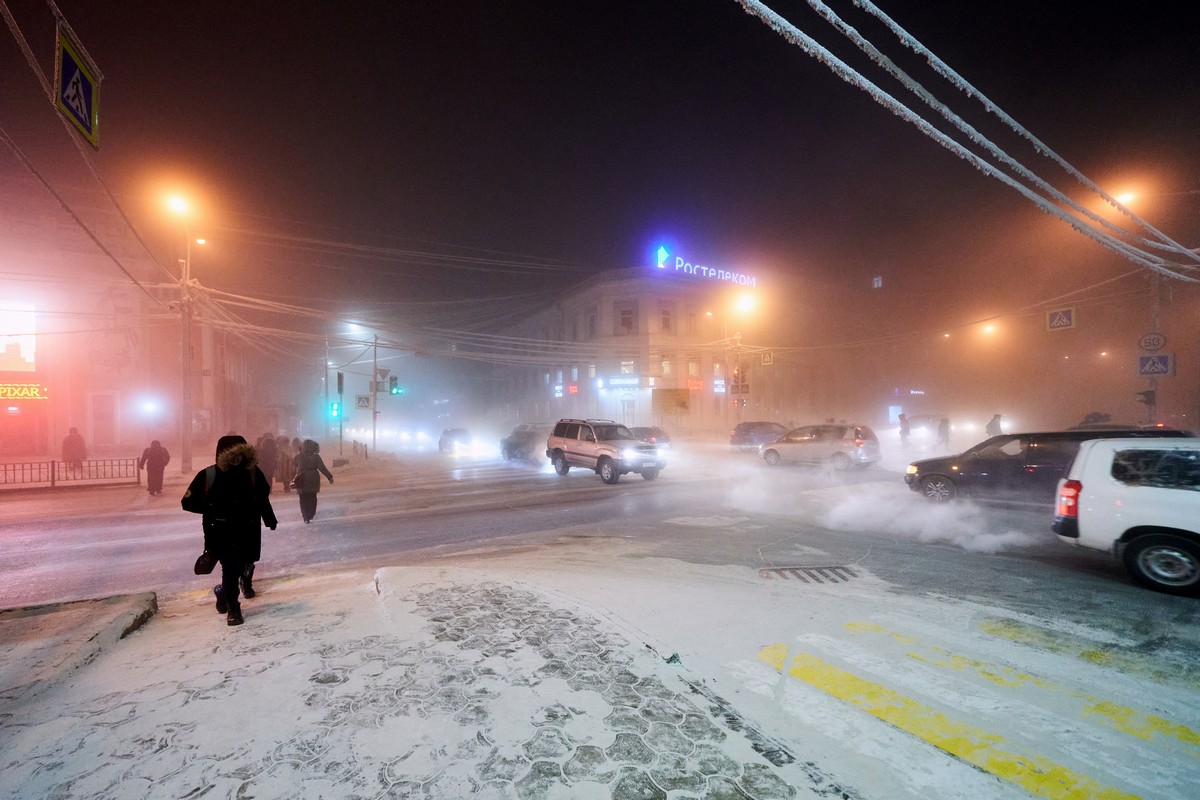 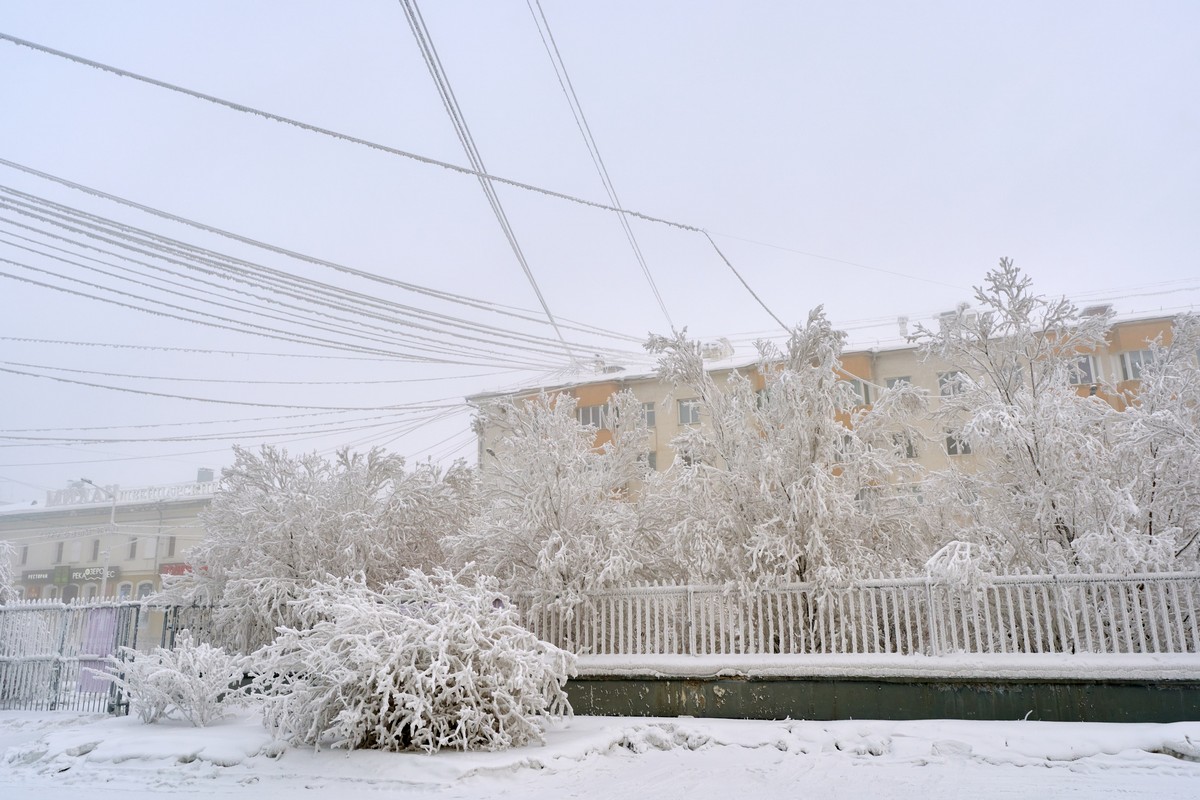 And you (and I) thought Moscow gets cold? Nope – we never see this in the capital:

Another feature that sets the city apart – the masses of elevated cables everywhere. Since there’s permafrost here, laying cables underground is tricky and expensive; so up they’re hauled, suspended between poles:

One other unusualness… actually, today – its absence. When I was last here, in 2013, I wrote these words in my Yakutia report:

“In the center of the city almost all the water and sewage pipes are hidden away somewhere [i.e., underground], while in the suburbs they go overground. This causes the locals to characterize Yakutsk in a rather unique way: ‘Yakutsk – the city with its intestines hanging out’.”

Well, on this visit, even out in the suburbs – no more intestines getting in the way and spoiling the view! Where did they go? Underground, surely. Or maybe we just couldn’t see them for the darn diesel-laced haze? )

We’d walked pretty much around all of downtown Yakutsk, yet this was the only building we saw constructed on stilts. Because of the permafrost, any foundations sooner or later start to shift here, so building on supports like this is resorted to as some kind of solution. I just thought: so what about all the other buildings that don’t have stilts?!… 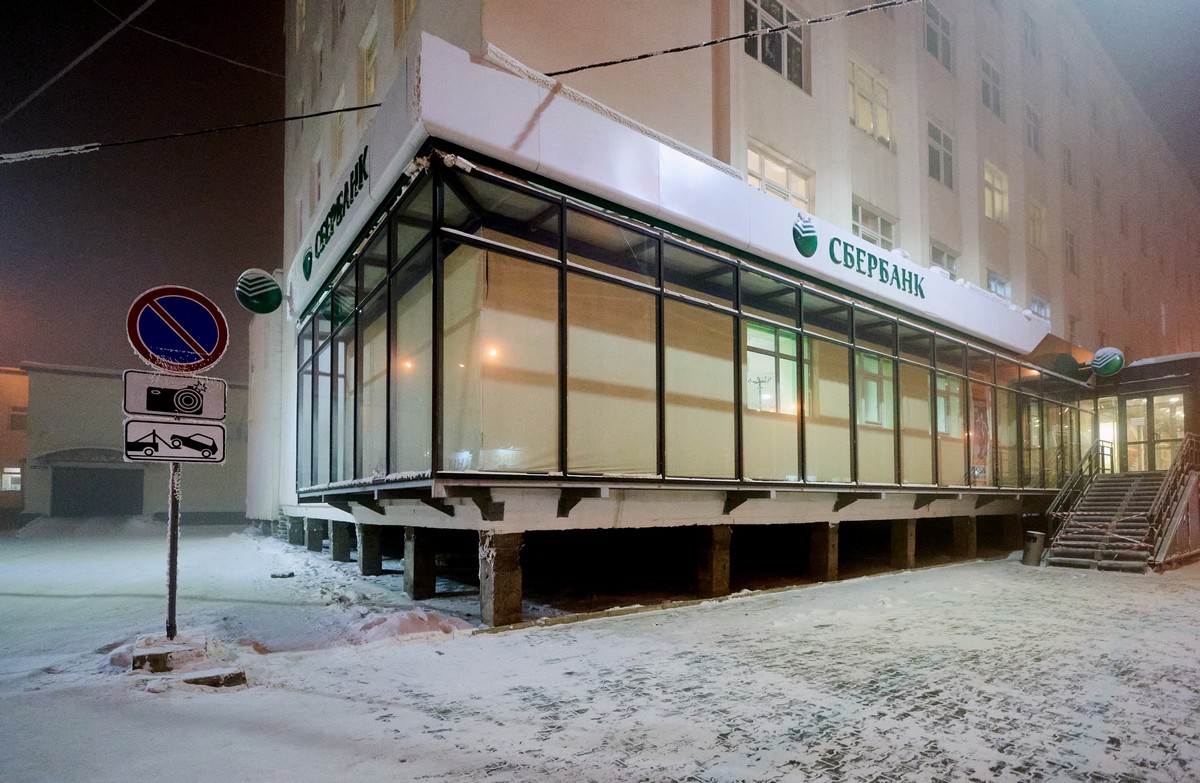 Later on our journey – actually just two or three days before its end – we realized (too late) that we should have taken photos of all the different Lenin statues in the different cities and towns and villages along the whole route. Shame. Still, the one in Irkutsk was rather average, with one of the standard poses (arm up and out, showing the way toward world revolution). One thing about it though – it was hoarfrost-less. What’s its secret? Surely it can’t be heated? 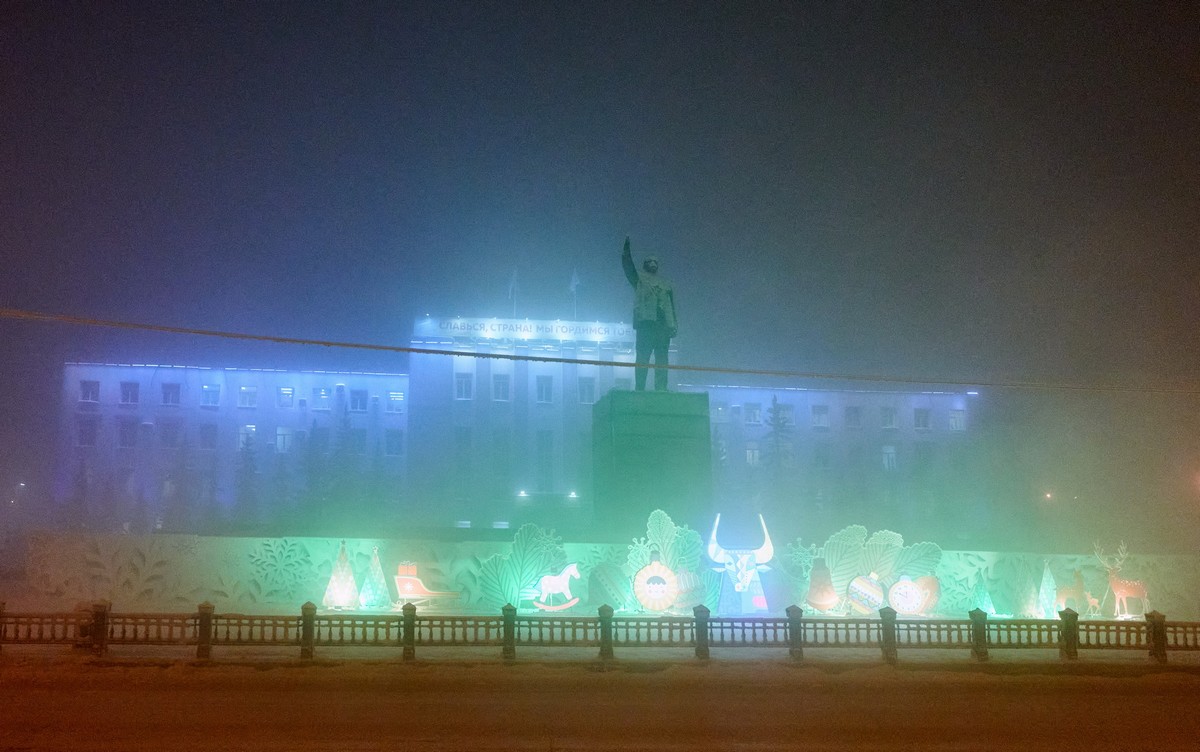 DZ stands shellshocked by the extreme cold on his face (his polar suit keeping the rest of him warm) and the extreme whiteness of everything: 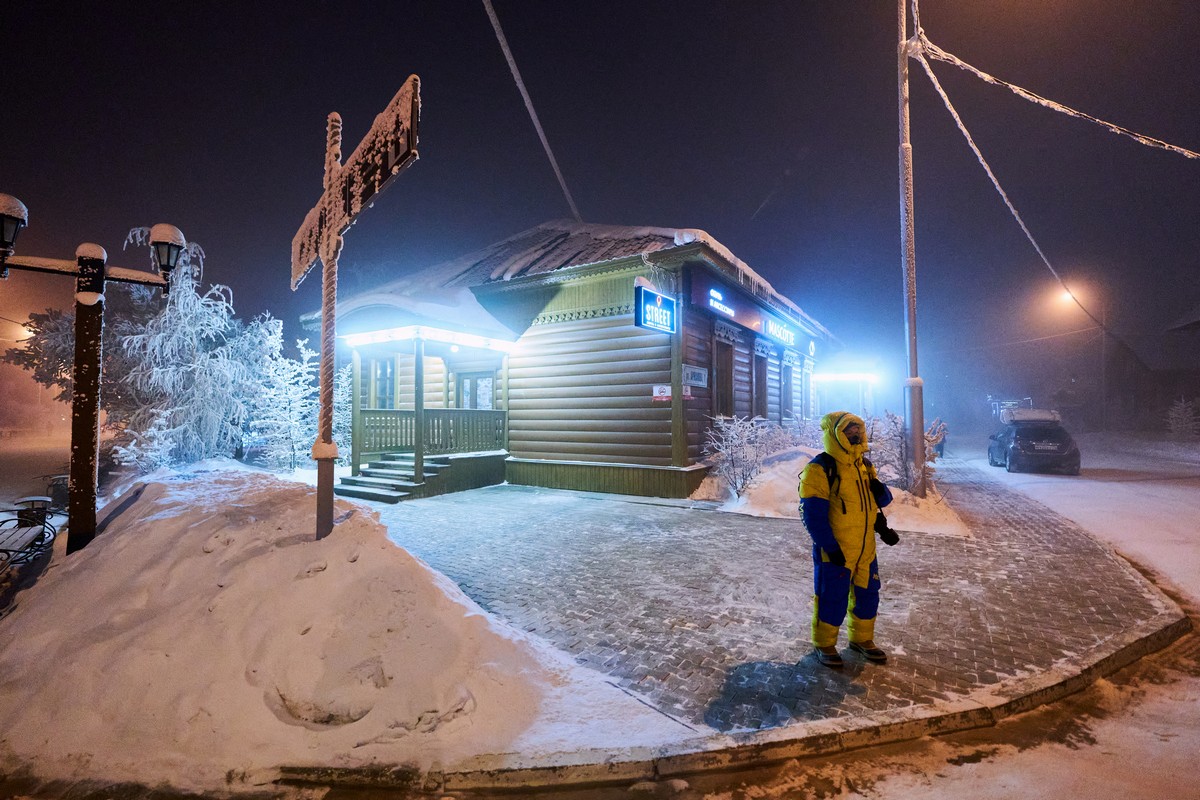 Cars get polar suits too. They save on garage rental, so why not? ) And they’re referred to – warmly! – as ‘portable Natasha garages’! And when it’s time for a drive, they take Natasha off, and onto the back seat or trunk or roof she goes!

More overhead cables. Occasionally, though there’s no wind, a cable will (mysteriously?) start to sway (under the weight of the ever-increasing hoarfrost, I reckon), shed its load of snow/frost, and the movement from this has a domino effect on the others, which one by one release their snow and hoarfrost too. Yakutsk hoarfrost hypnosis. Surely that’s a thing?…

Fish market. Look at the size of some of those salmon! ‘All fresh, nothing frozen’! Wait – those folks are probably out in -50 all day selling their produce. Yikes! Tough as nails, Yakutskians!

We didn’t buy any fish as there was the small matter of where we’d keep it for the rest of the 9000km journey!

And that’s about all from our walkabout around Yakutsk; but there’s more Yakutsk on the way: museo-and-assorted-other Yakutsk…