Actually, yes. Striking while the iron’s hot – let me quickly write up that list! I’ve seen all the world’s mega-volcanoes, so why not?

// The Americas – 0. There are volcanoes there of course – like Rainier and Fuego, and the multicolored craters of Costa Rica – but there is little unique and special about them, while I like my volcanoes very unique and very special!

1. Santorini! (Mount Etna and Vesuvius don’t make the list: nothing too special to see there);

2. The Klyuchevsky Group of volcanoes (including Klyuchevskaya Sopka itself);

// Mount Fuji (Japan) not included as there are around ten similar volcanoes in Kamchatka, plus others in other locations;

10. Mount Nyiragongo and its lava lake (Congo; haven’t been yet).

And if the Kurilian Krenitsyna is the King of the Volcanoes, then Ushishir is… the jewel in the King’s crown! Yes, that is pushing the limits of metaphorical decency, but those are the images that came to mind when I strained my visual memory and took a look at the pics from this year: 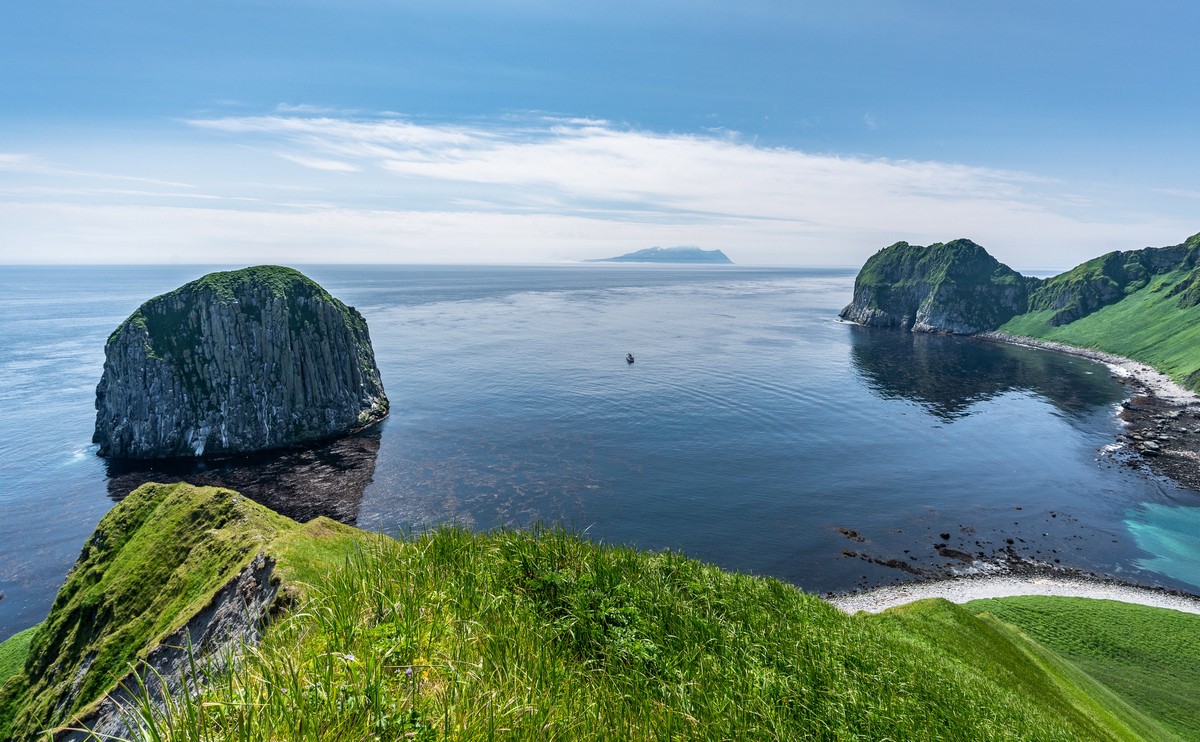 Where the sea meets the caldera’s water: 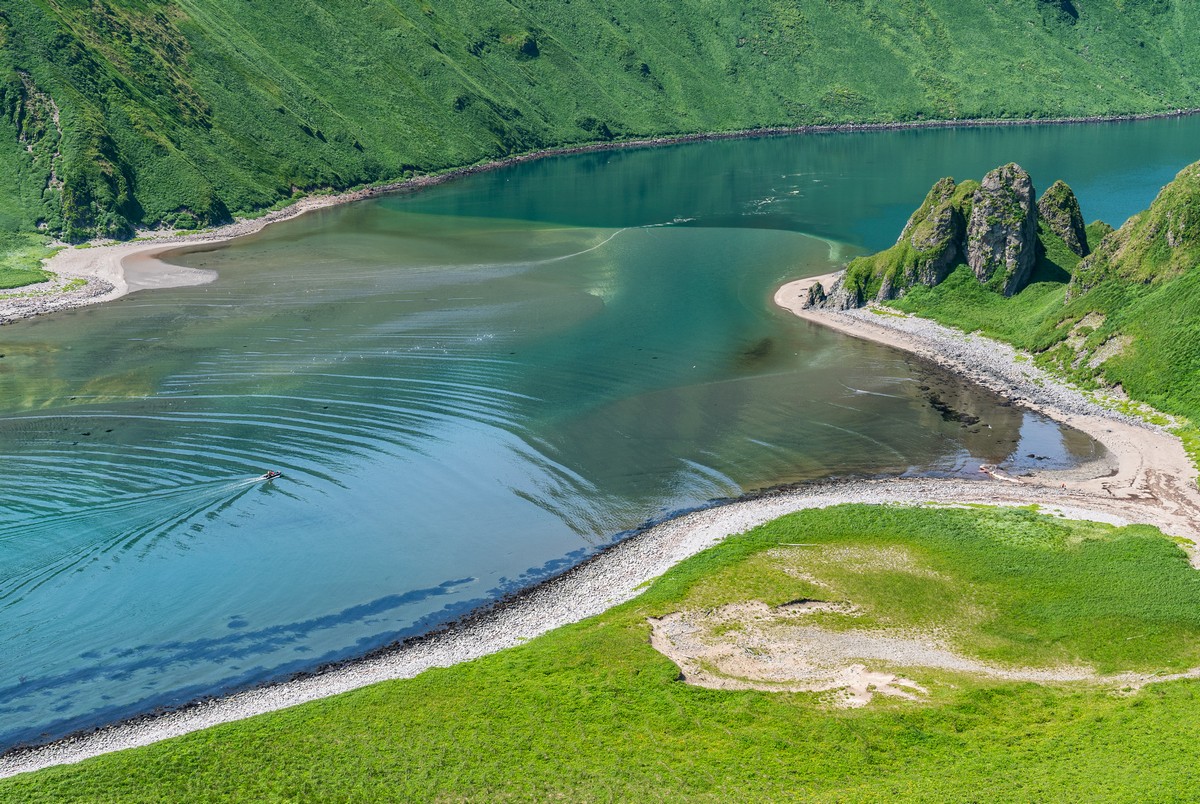 The water’s as pure as the driven snow – but just as cold too! 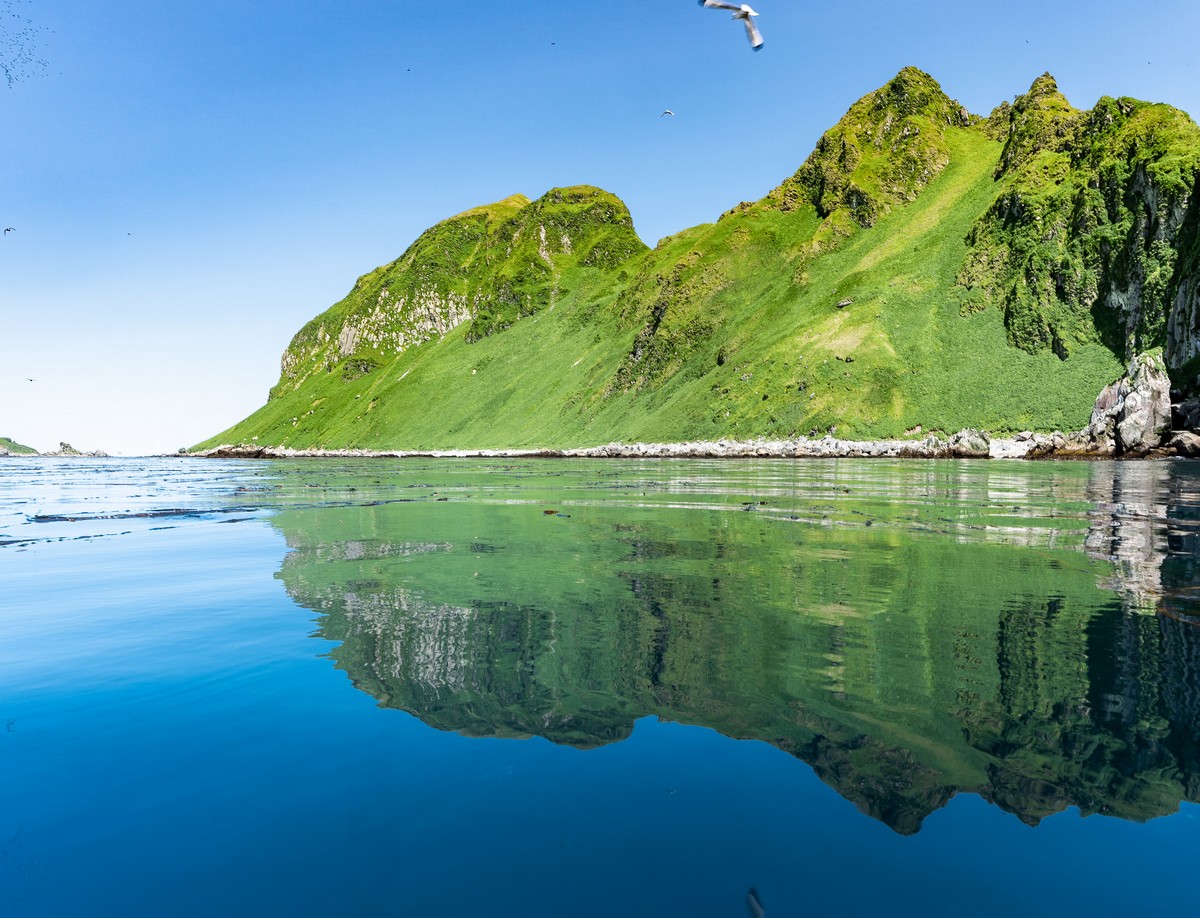 Algae below the surface; and under that – prickly sea urchins! 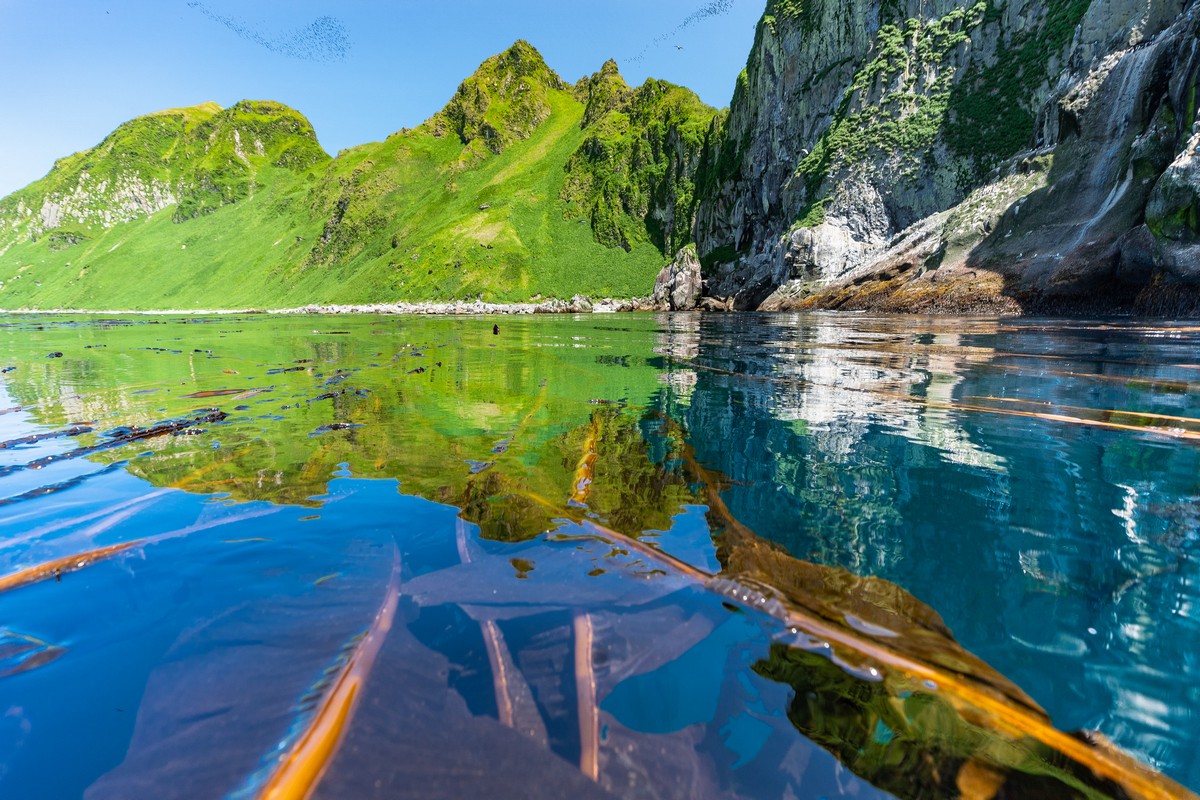 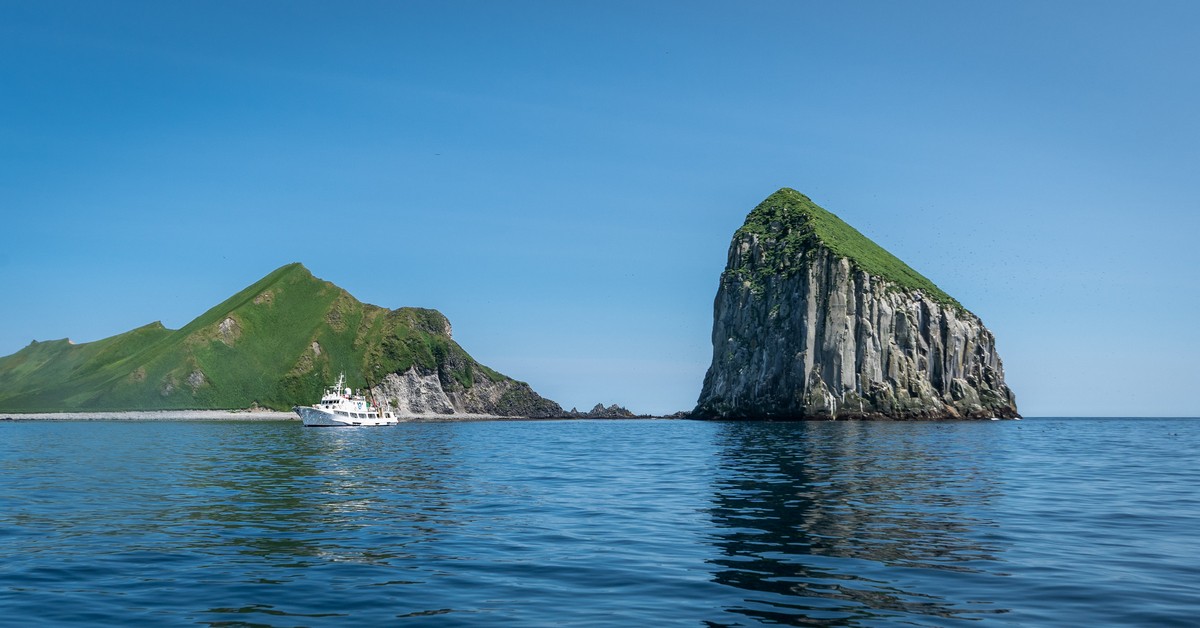 Views from the water. It’s not all that large, but its forms and colors make up for what it lacks in size: 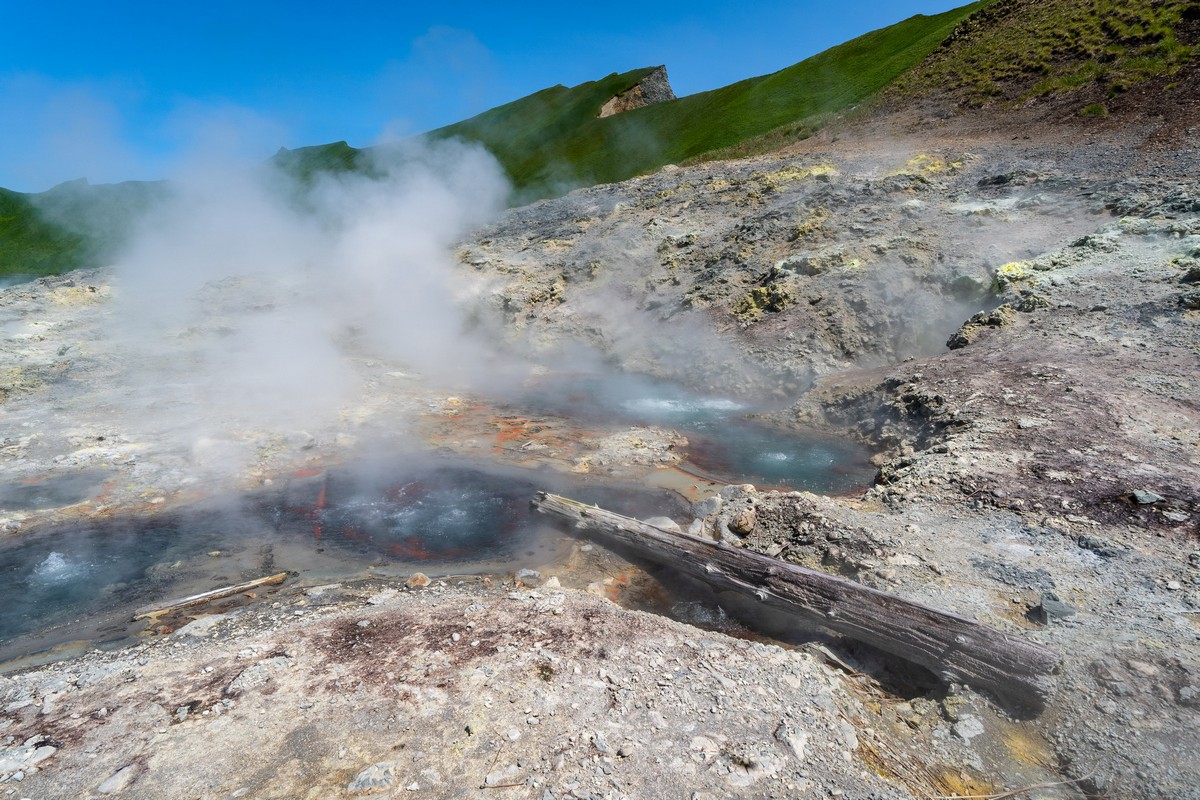 At a different part of the caldera – also fumaroles, only underwater ones – giving the sea a turquoise color. 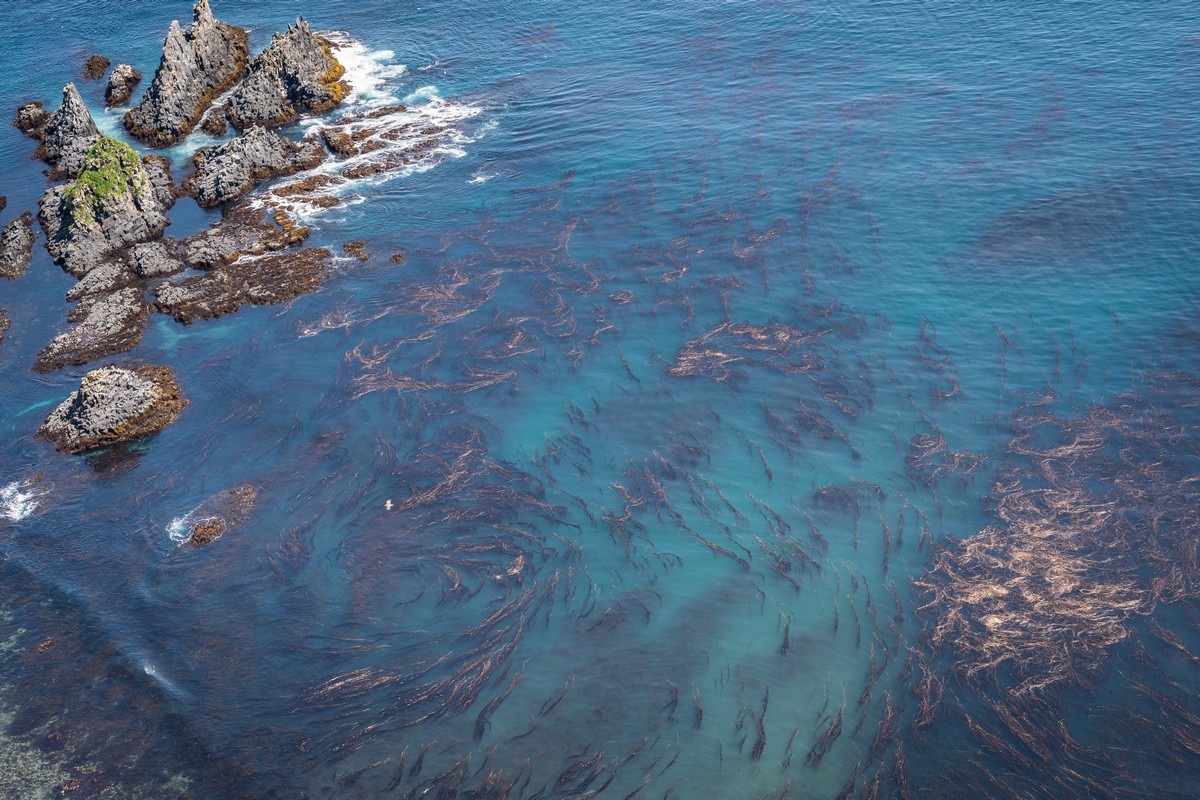 The designers did a grand job: 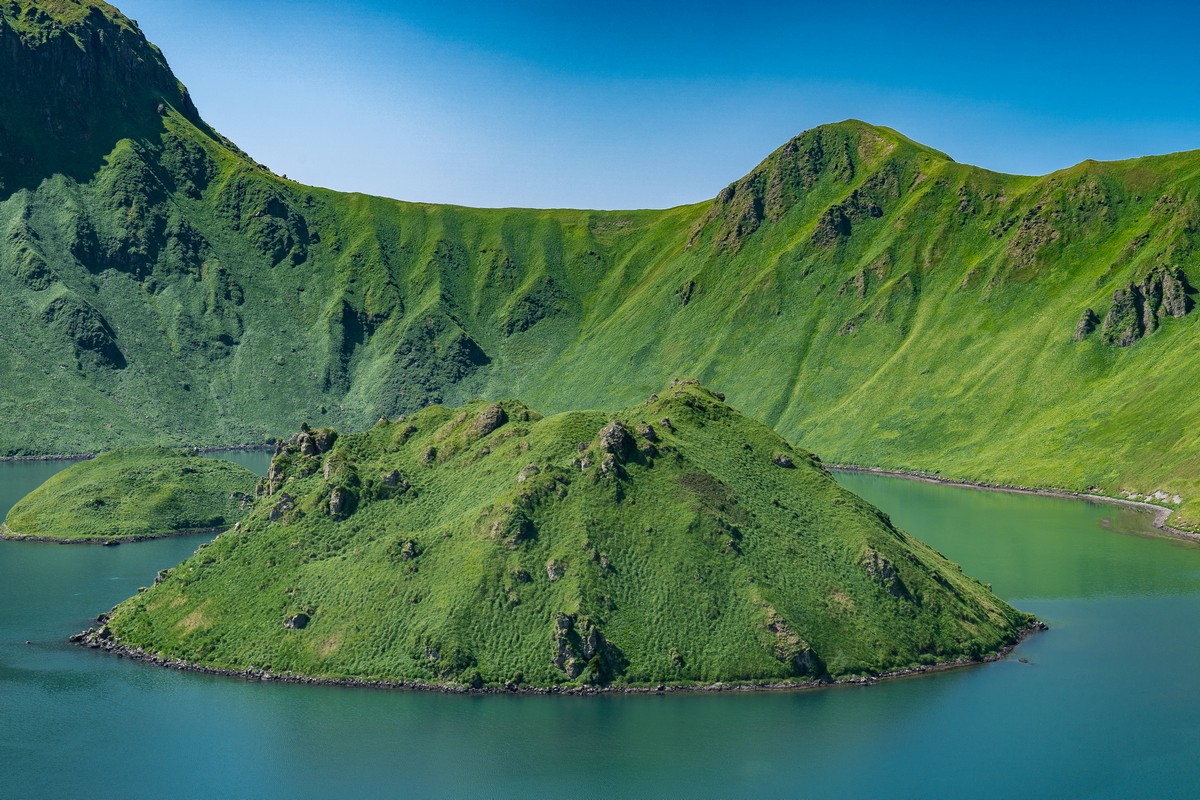 On the volcano itself – long grass. Looks lovely from afar; very tricky to clamber through.

And other assorted views:

The cave (grotto) with two eyes:

The inevitable change in the weather:

But the weather doesn’t affect the hot springs: 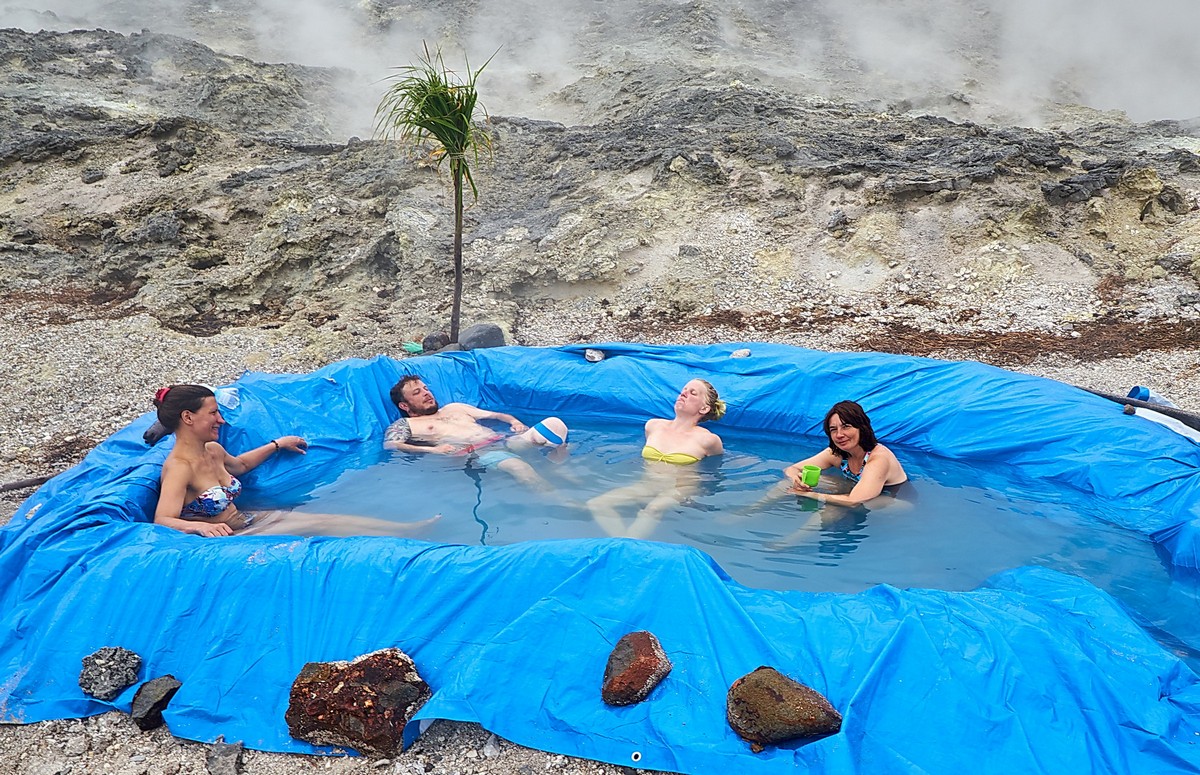 Ushishir is actually not just one island; it’s a small archipelago: two islands and lots of rocks dotted around them.

Here it is on the map clearly visible. The two large islands are called Riponkicha and Yankicha. Japanese-sounding. Ah – actually… they are in fact Japanese names, originating from the Ainu.

Now, if ever you’re on Yankicha – make sure to climb up to the rim of the caldera for a veeerrrry long sitting session: the views are so fantastic you will be there a long time – weather permitting. Better than sitting: a rim-walk! But beware: it’s no easy stroll. The long grass I mentioned – it can reach up to your waist, or higher! Ouch. 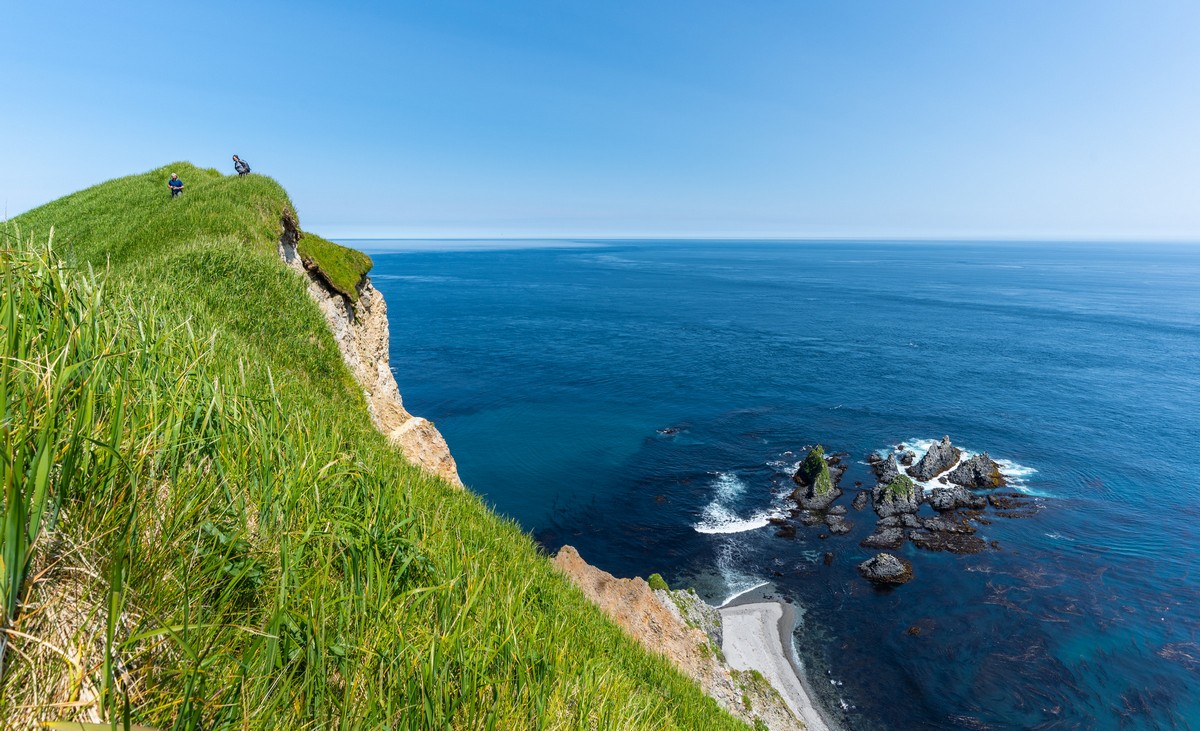 After a bit of grass wading – take a breather: sit in the grass and meditate, as (my long-time extreme-travelling ally) olly_ru did. But of course she did: Ushishir is her favorite place on the whole planet – and she’s seen rather of lot of that whole planet ). 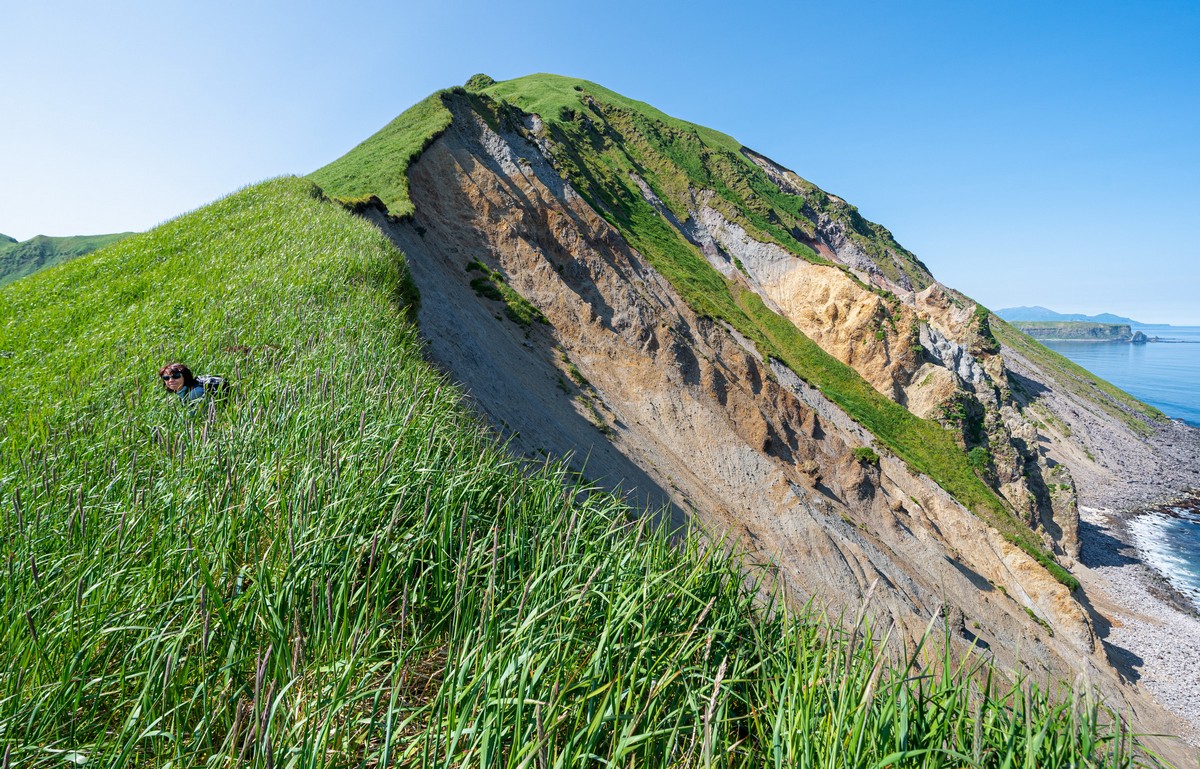 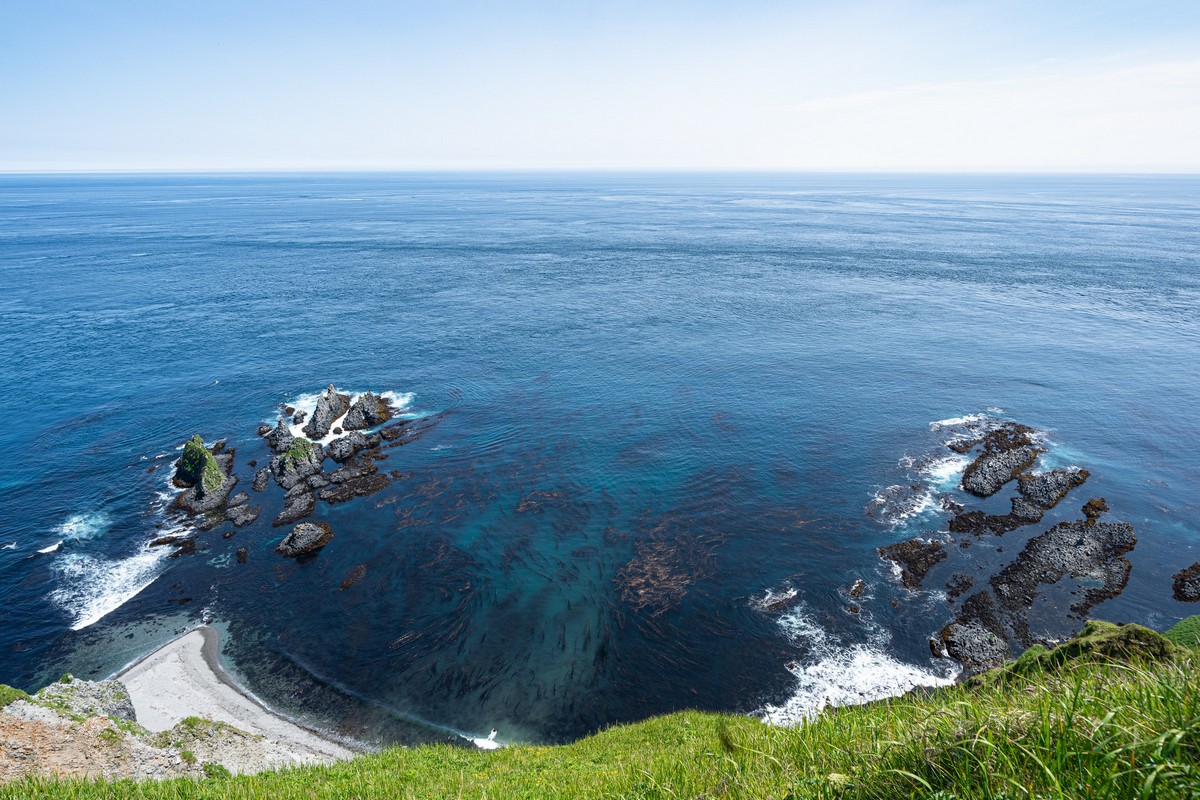 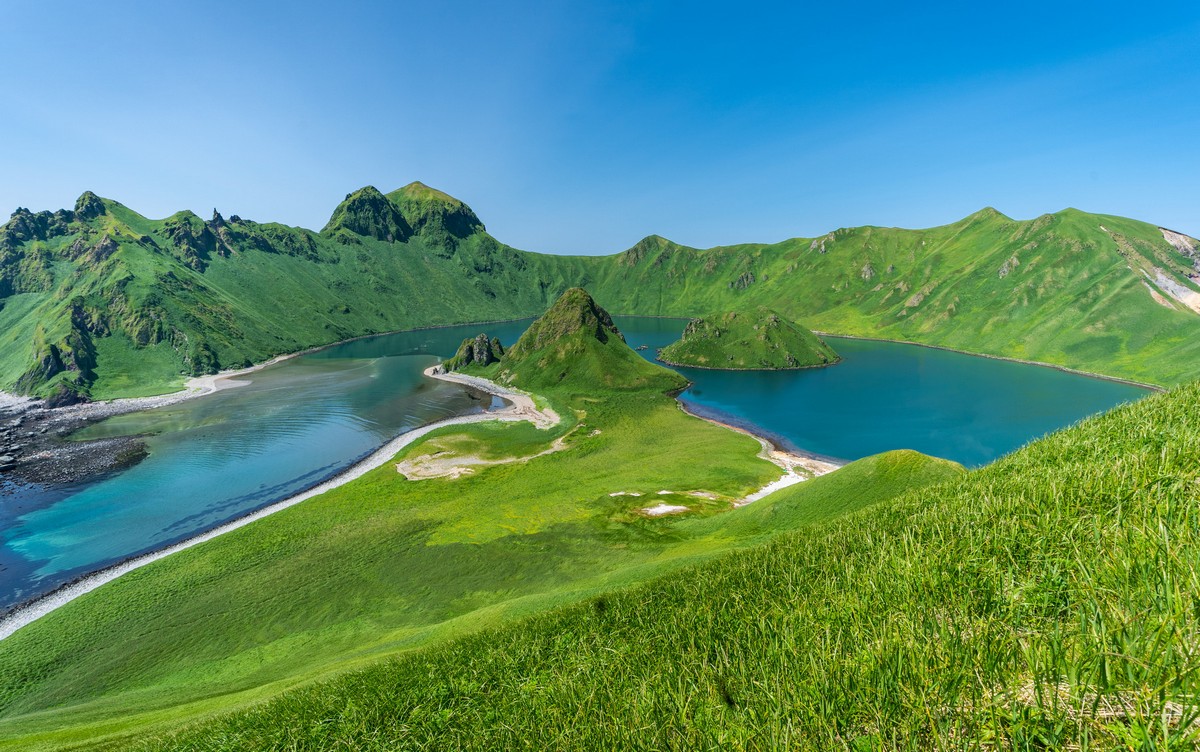 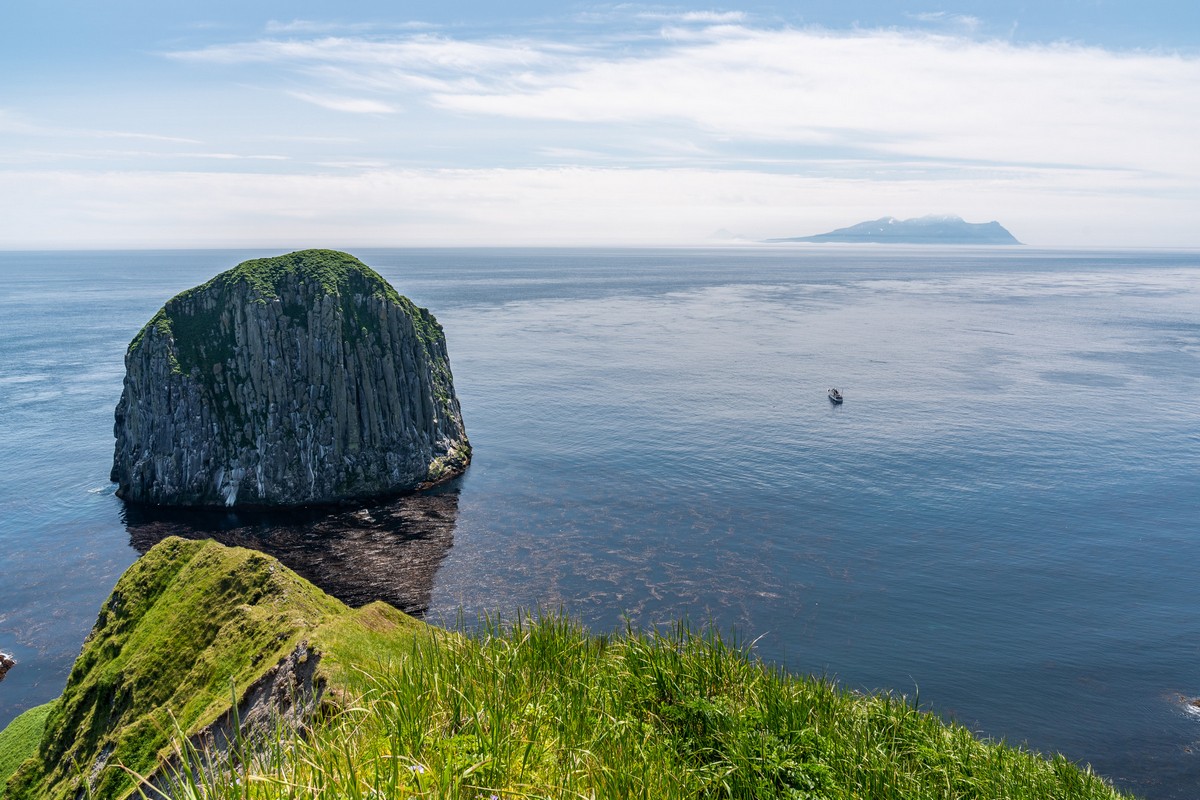 Dome Rock from a different angle: 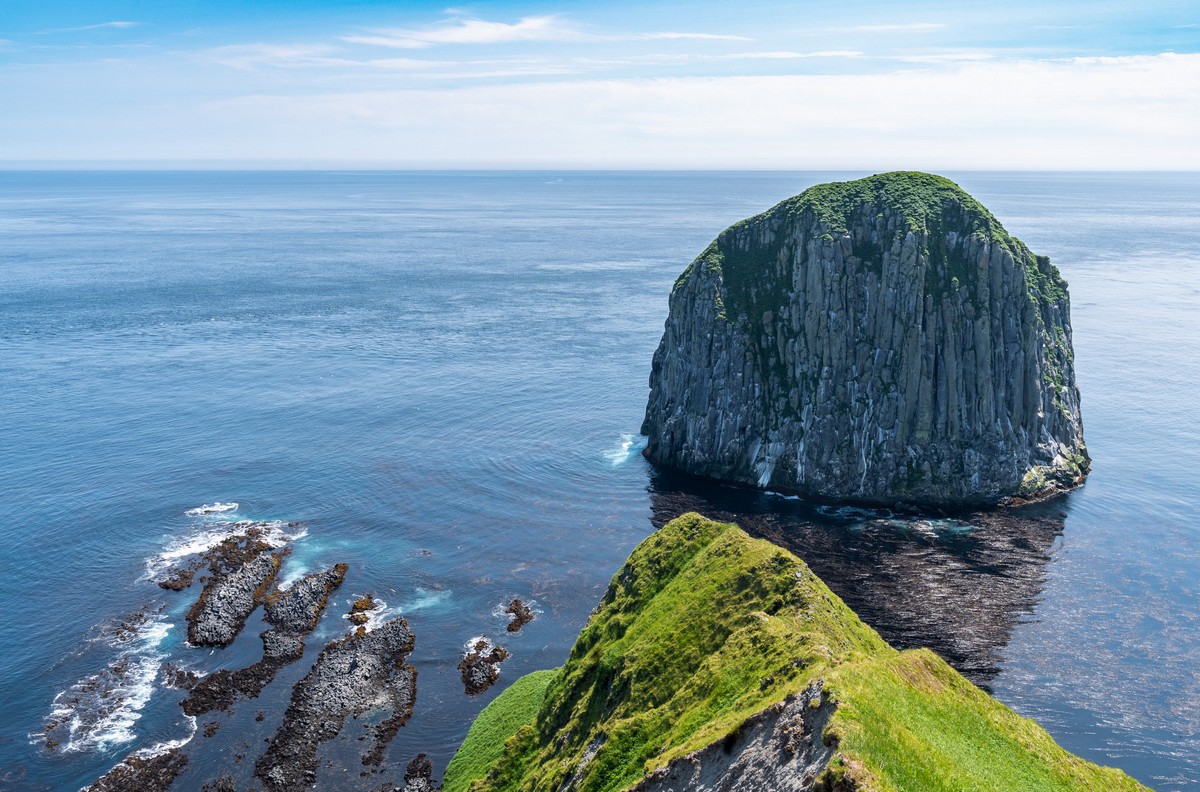 And that island over there is Ketoy. And behind it, to the left – the volcanoes on Simushir (which we were to visit). 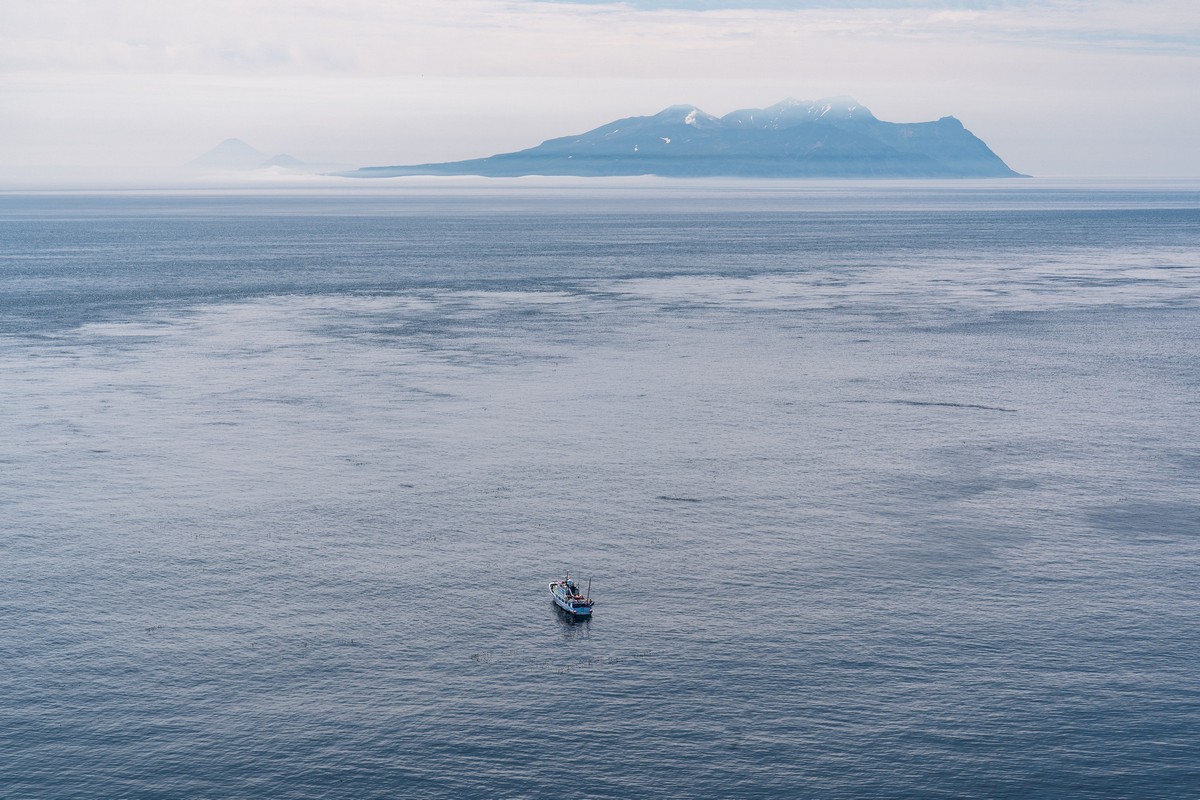 The ‘shuttle’ heading for the shore. No waves, no clouds, calm, stillness: Kurilian paradise! 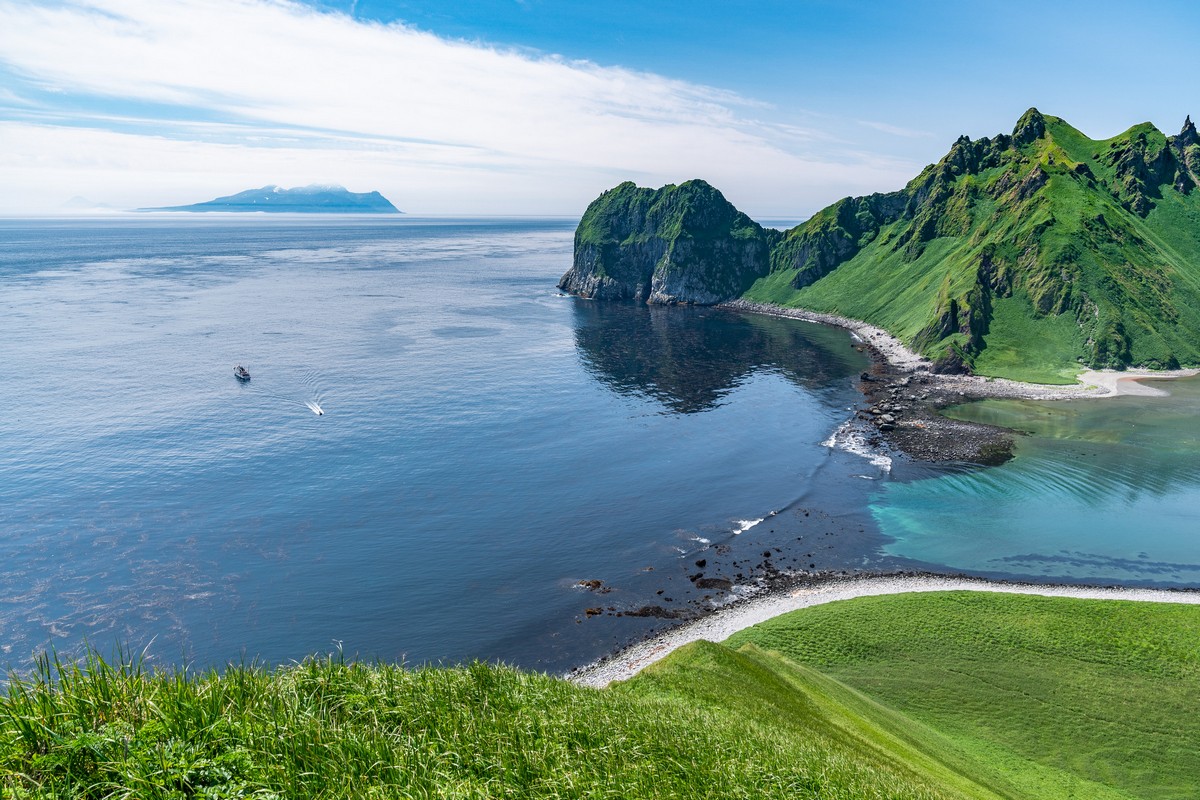 Looks like the seaweed likes the underwater fumaroles as much as we do! 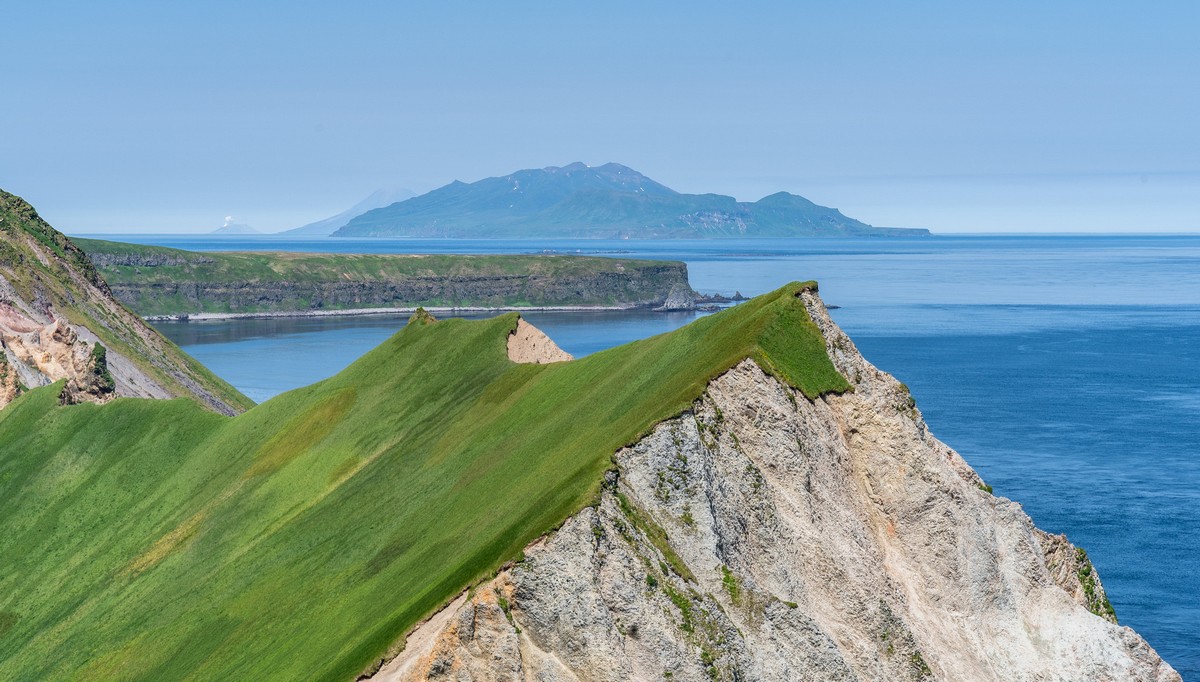 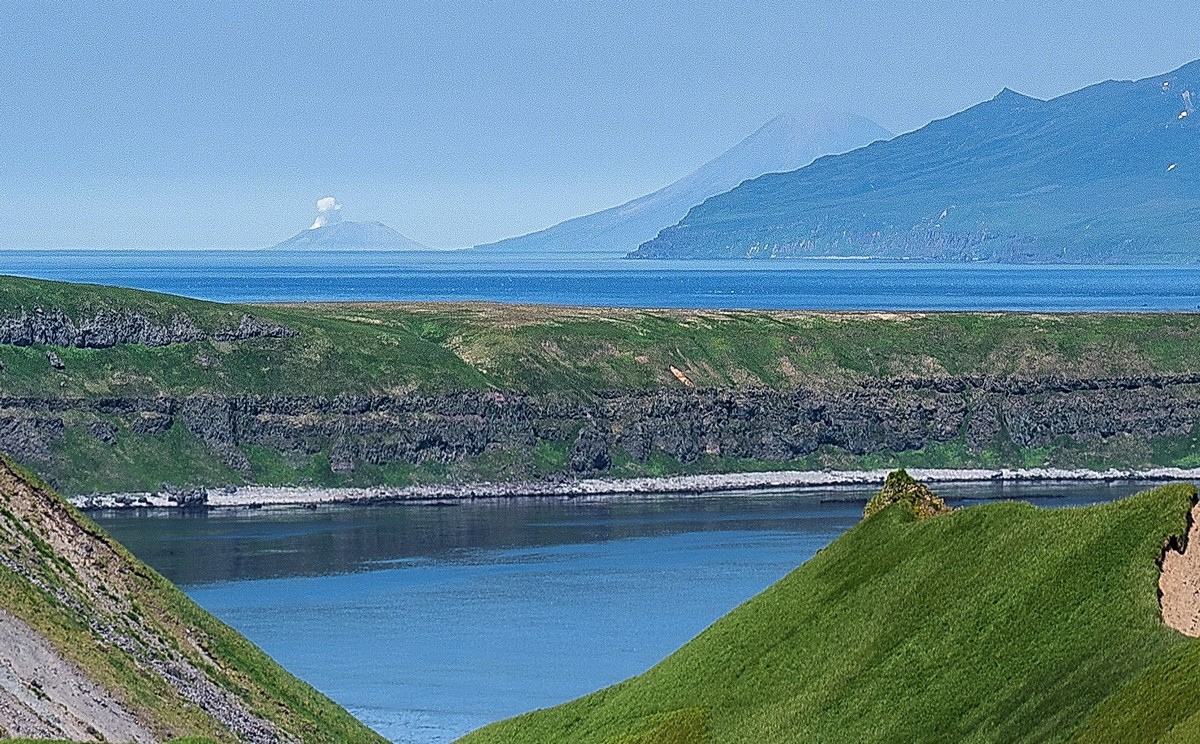 Now – this here rim of Ushishir: I’d been dreaming of walking right round it for five years (!) already. I’d got the extra batteries for the camera ready and was all set to go, but then – no way. Why? Because of my boots! They were new, and good ones, and I’d already walked plenty in them (around Krenitsyna and up Ebeko), but for some reason, walking along/across a constant gradient was impossible due to the pain! Oh well. Next time must bring my flip-flops! 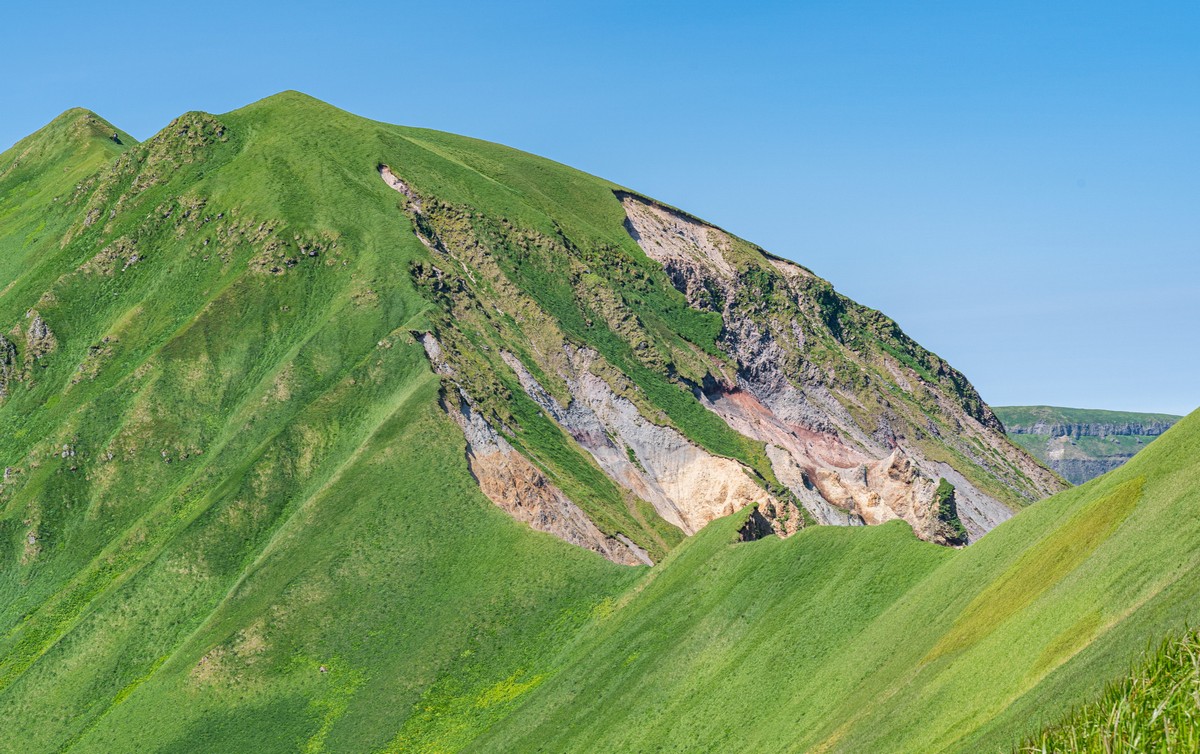 I put that downer behind me; and concentrated at the natural volcanic beauty in front of me ->

Even when it’s overcast there’s still so much to see. Of course when the sun’s out it’s much better.