Just a month ago I was unaware of one of the most amazing, enchanting and photogenic places on the planet. Now I know. The place I’m talking about is Ushishir.

“Ushishir?” you ask. What’s that? A distant relative of Yorkshir? A cousin of Middle-earth’s Shir?

No, silly. It’s an old volcano with a caldera that’s collapsed down to sea level. A volcano bay.

The best place here for visual meditation is up on the top of the edge of the caldera. The bay itself inside the island is pure eye candy. Then there are waves coming in off both the Pacific Ocean and the Sea of Okhotsk on the outer sides. It’s a place where you can just sit and stare at the surroundings for hours, and the higher you get up the sides the better – it’s sure worth the climb.

Ushishir isn’t quite an island actually; it’s an archipelago made up of two small and a great many tiny islands and rock formations, almost in the middle of the string of Kuril Islands. The two largest islands are called Yankicha and Ryponkicha. These sure sound a little Slavic; however, they’re russifications of old Ainu names, with the former meaning something like ‘convenient for disembarkation’ (as our local expert guide Igor informed us). 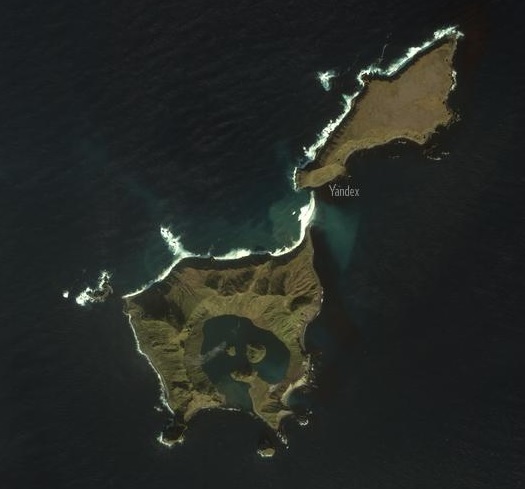 Disembarkation on Yankicha turned into an unexpected morning cold shower on our motorboat as the waves nearer the shore were quite choppy – most bracing and refreshing. Our excursions on land were less startling though no less stimulating… 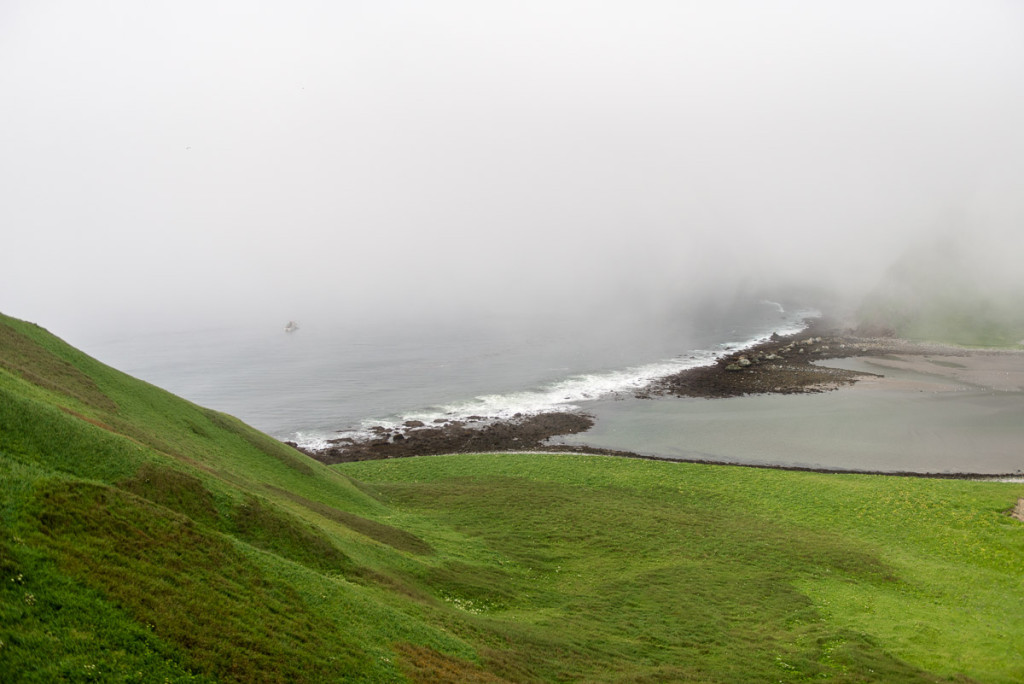 The island is an old sea volcano, whose remaining caldera rises up to 300 meters above sea level. Inside there’s a small bay with three little bumps inside – three relatively new baby volcanoes.

We didn’t stay long near sea level when faced with this unearthly beauty. Before you knew it we were dashing up the side of the caldera towards the top of its edge. That was no cakewalk – the going was tough due to the dense high grass we had to wade through. “Like walking through an enormous stack of hay,” our guide remarked. 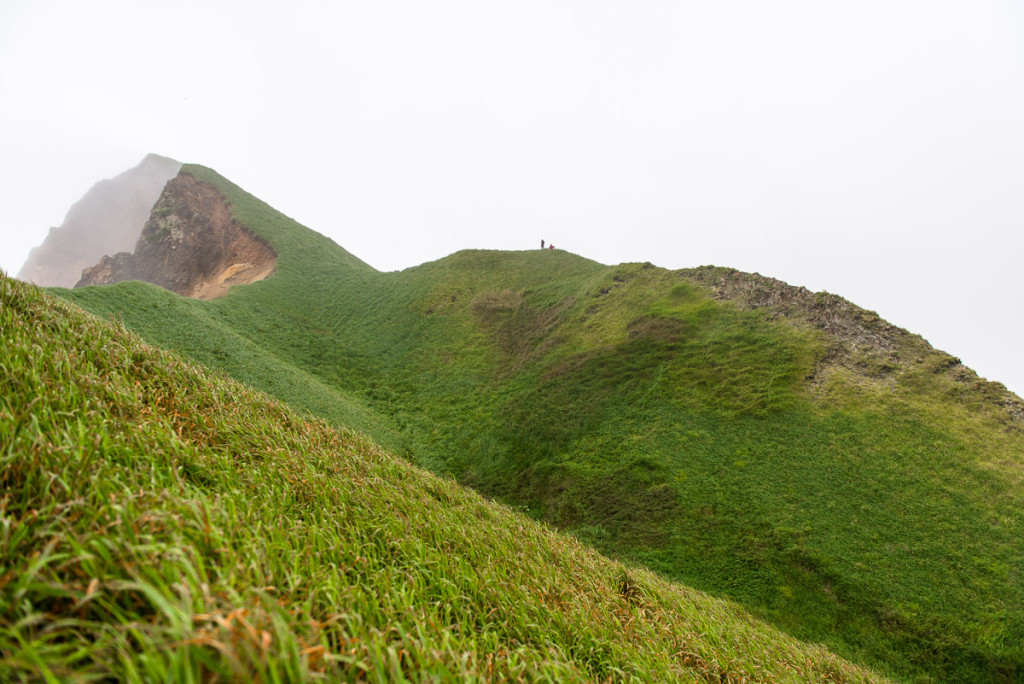 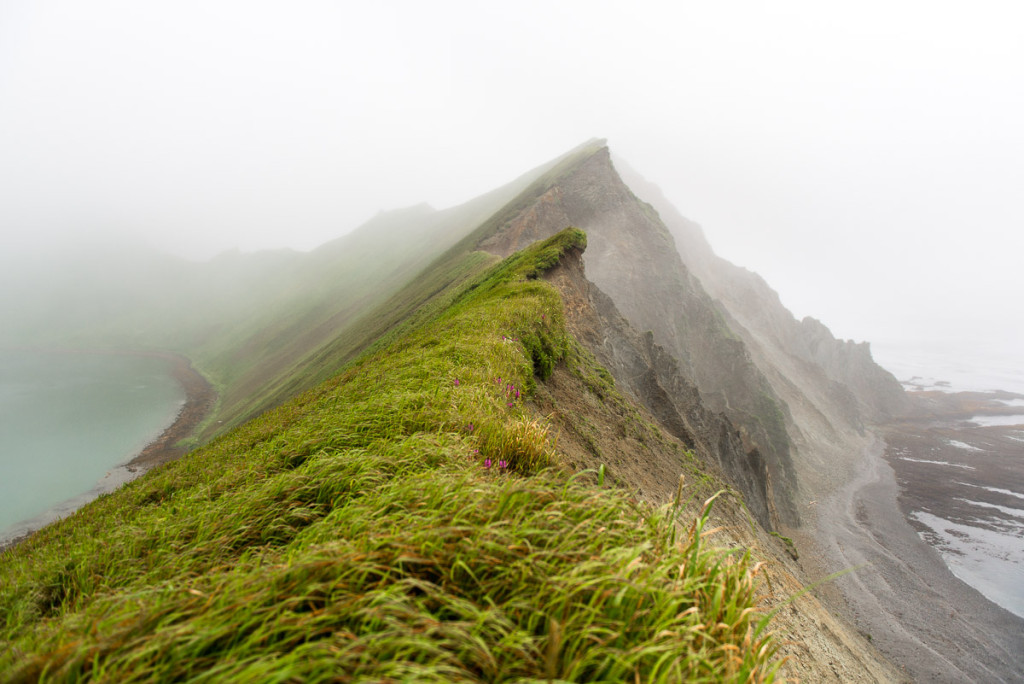 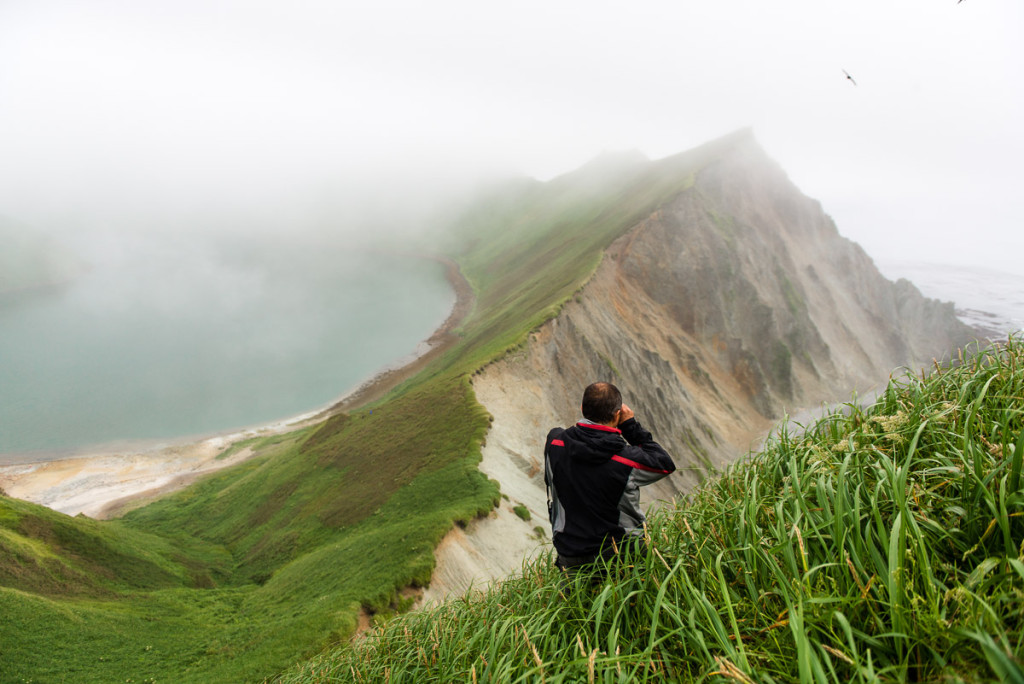 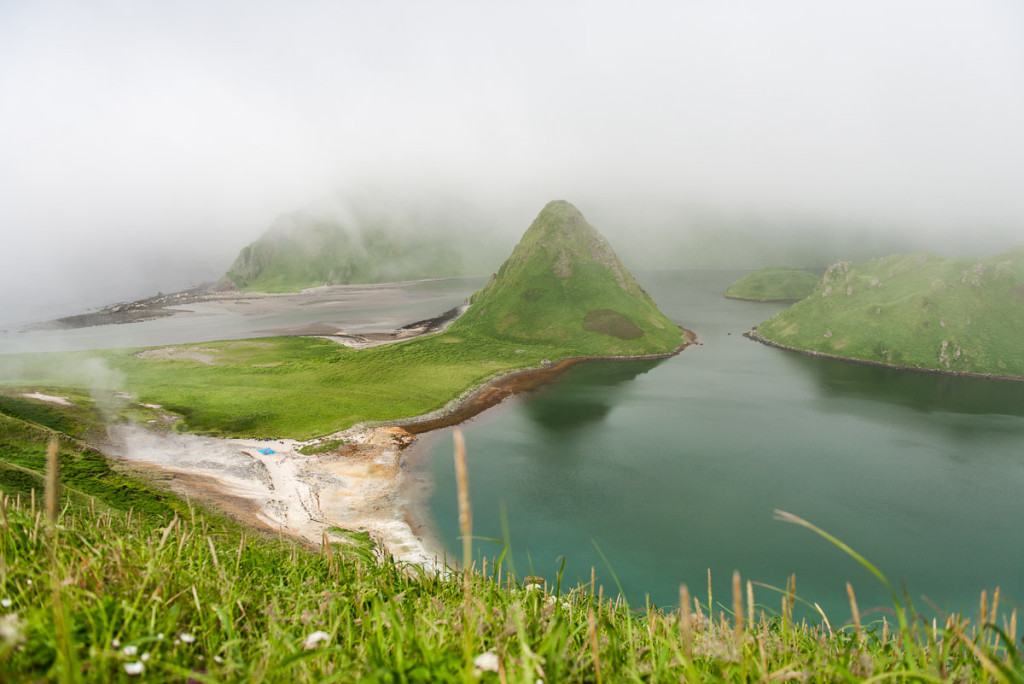 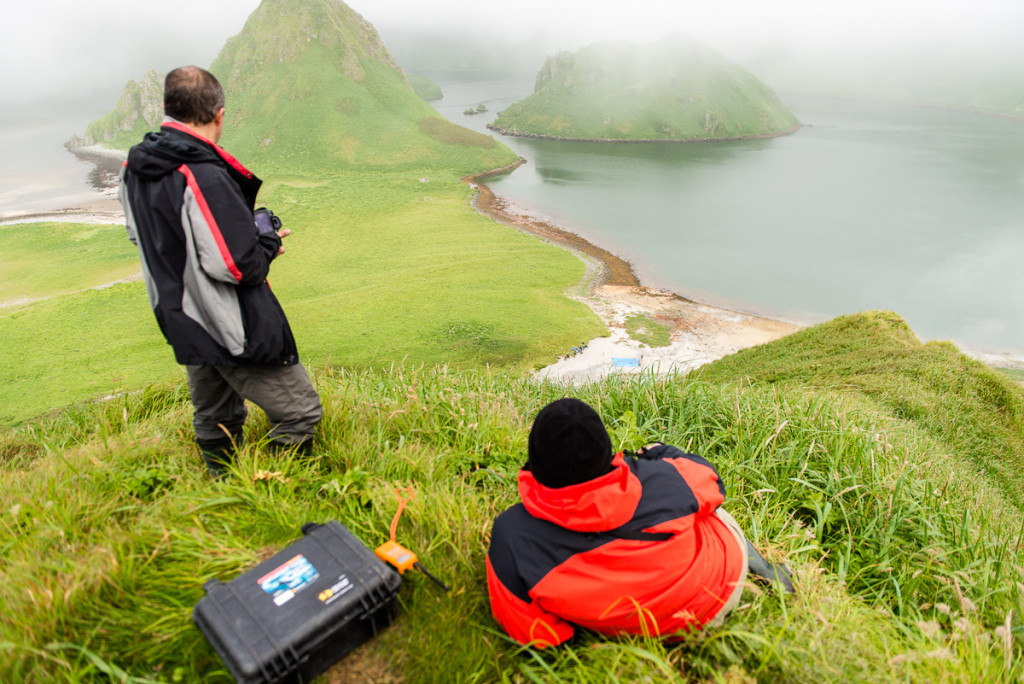 The top rim of the caldera can be walked around in two or three or four hours – depending on the stamina level of the group. And the further anticlockwise you go, the higher and more grandiose the views. 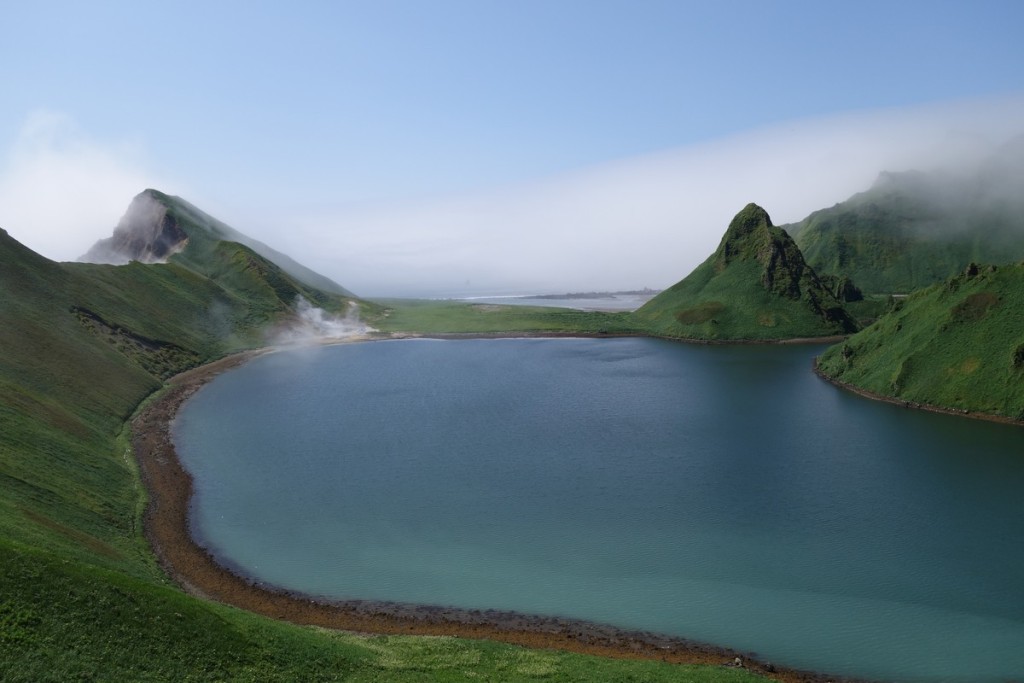 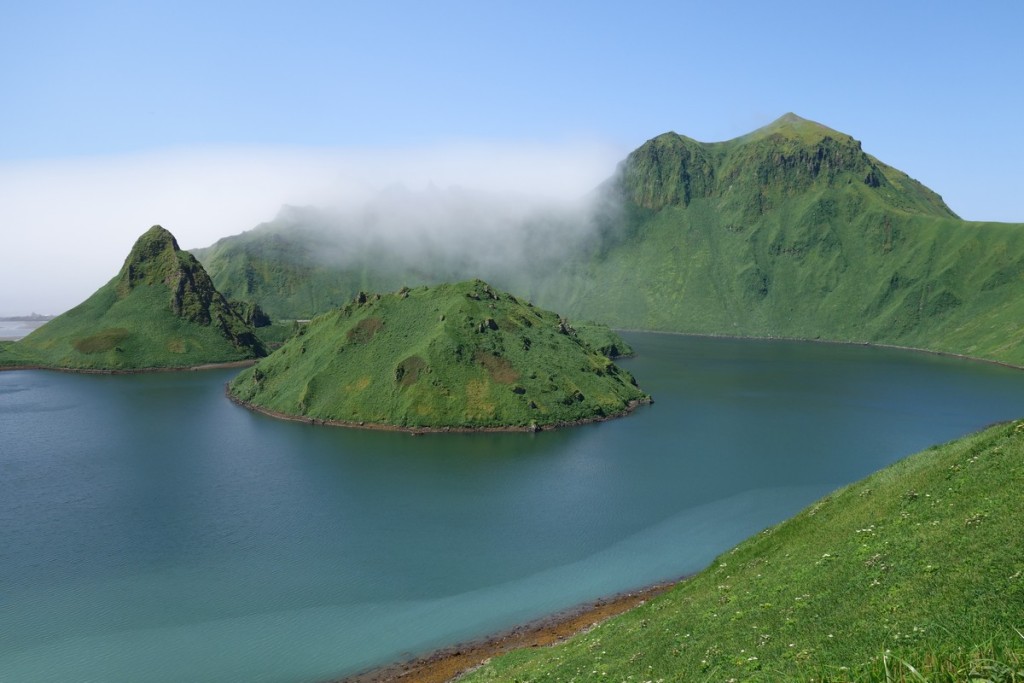 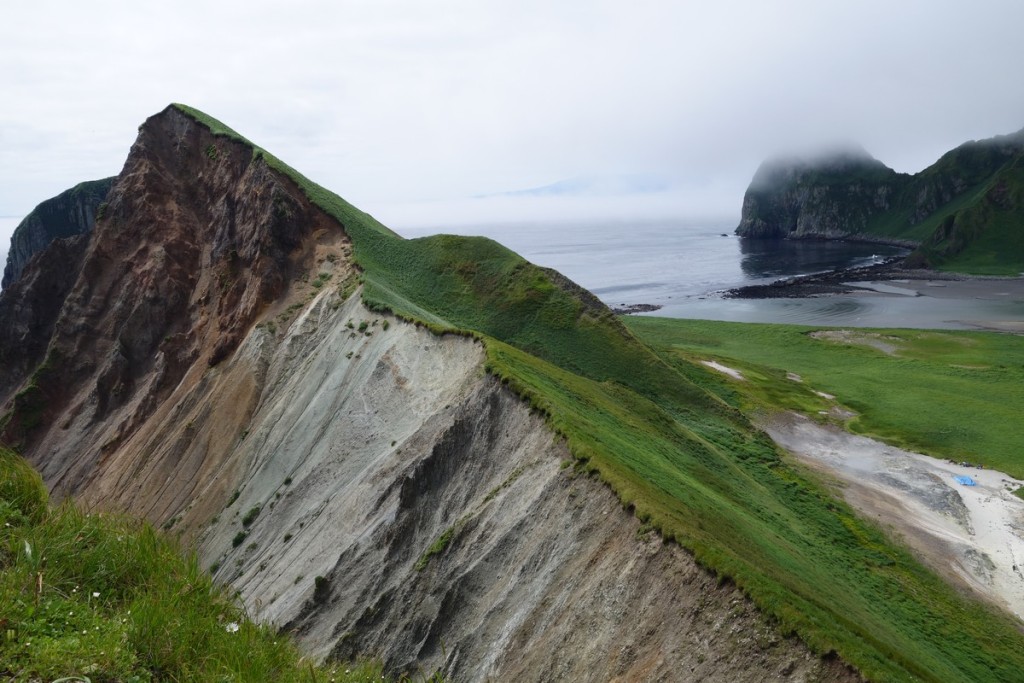 I didn’t know when Ushishir had last erupted. So I turned to Wiki, naturally. Turns out, in 1884 – 130 years ago. All the same, this is still very much a ‘real’ volcano. Besides the giveaway volcanic appearance of the caldera and three bumps inside it, also present are ancillary lesser volcanisms – a small fumarole clearing and hot springs.

Lifehack: how to build a pool with a tent by @e_kasperskyTweet

With characteristic Russian make-do-with-what-we-have-ness we managed to construct a makeshift pool with one of our tents! Who’d have thought we’d be getting all touristy-resorty in this desolate place? Was nice to have a warm dip, as if to make up for the earlier cold shower. Karma :). 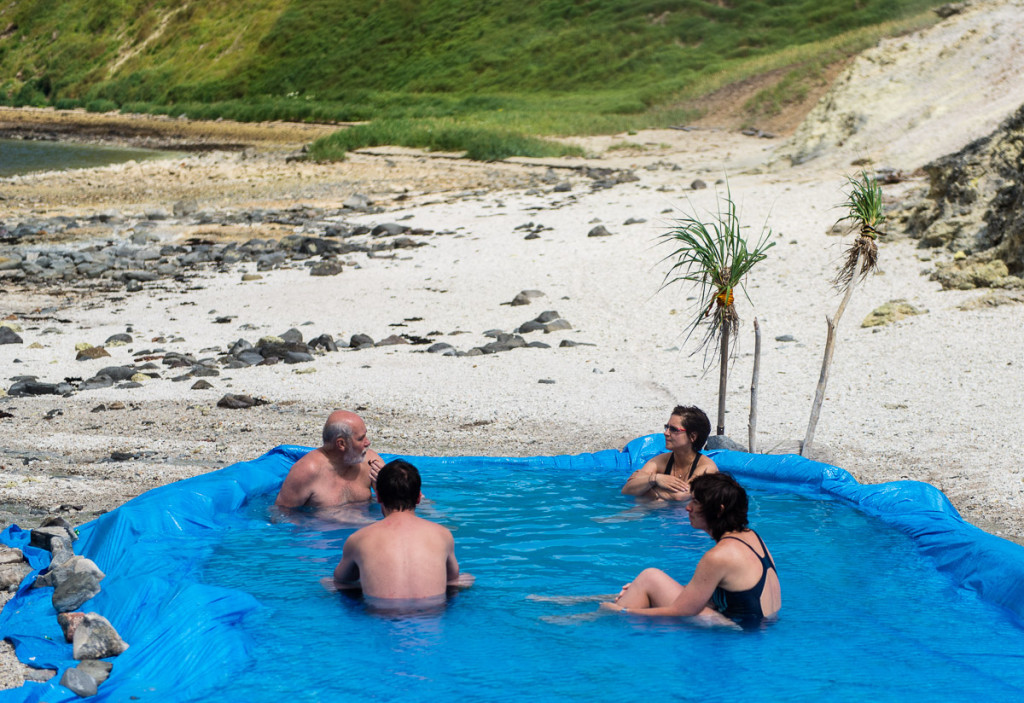 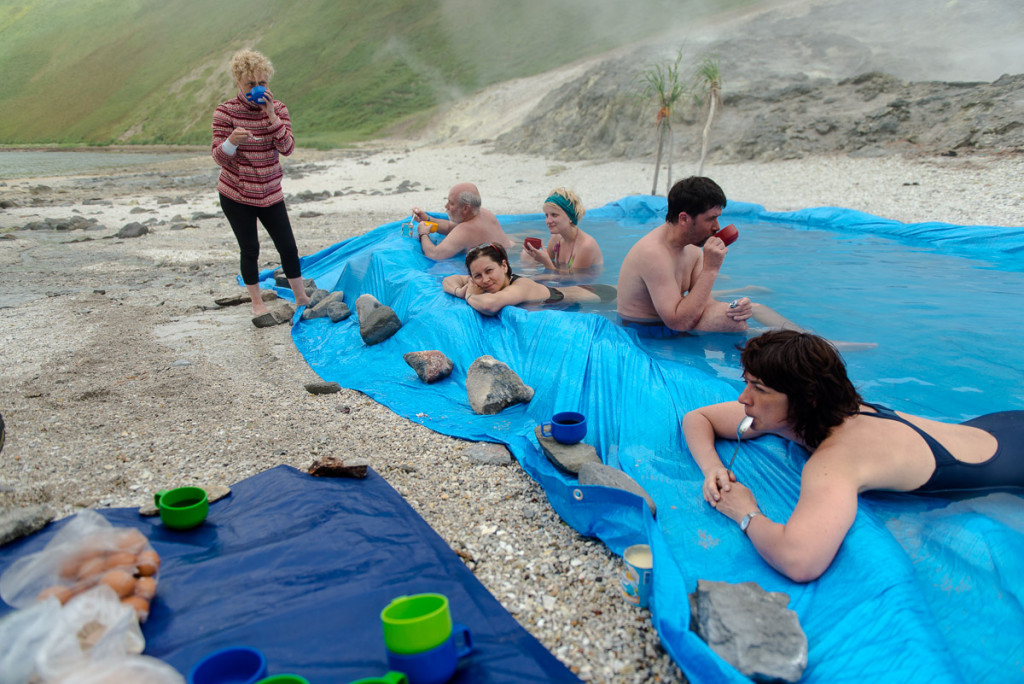 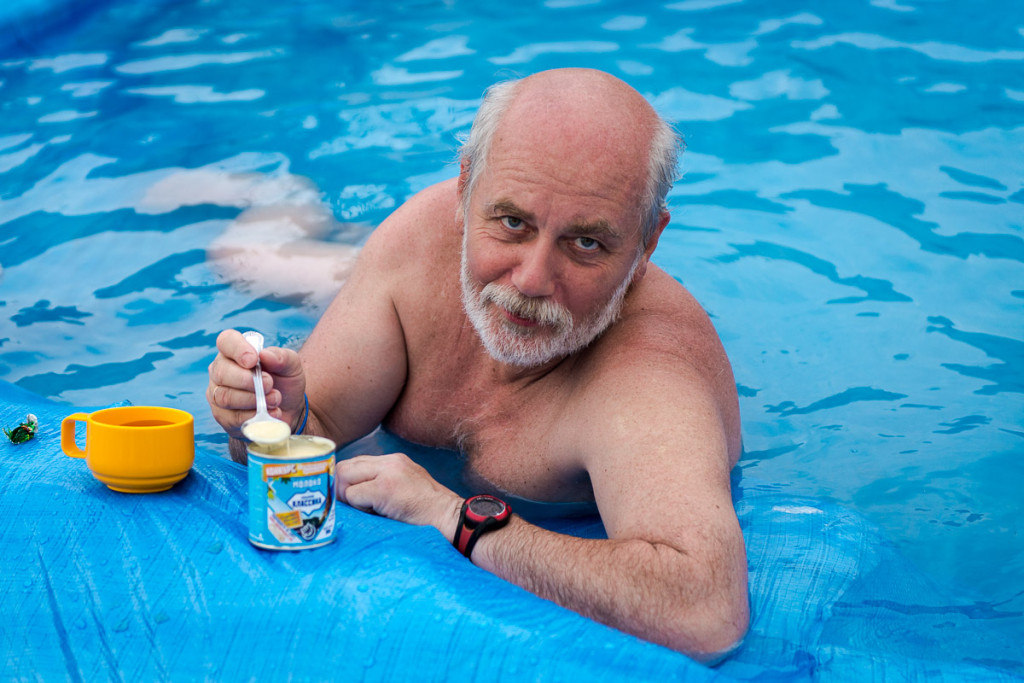 Condensed milk for the tea, naturally

But the more active and restless among us decided to leave the coziness of the pool and explore the island further. And they were rewarded handsomely for their restiveness: they discovered a tunnel through the base of the caldera that goes from the sea through to the bay inside. Bingo! 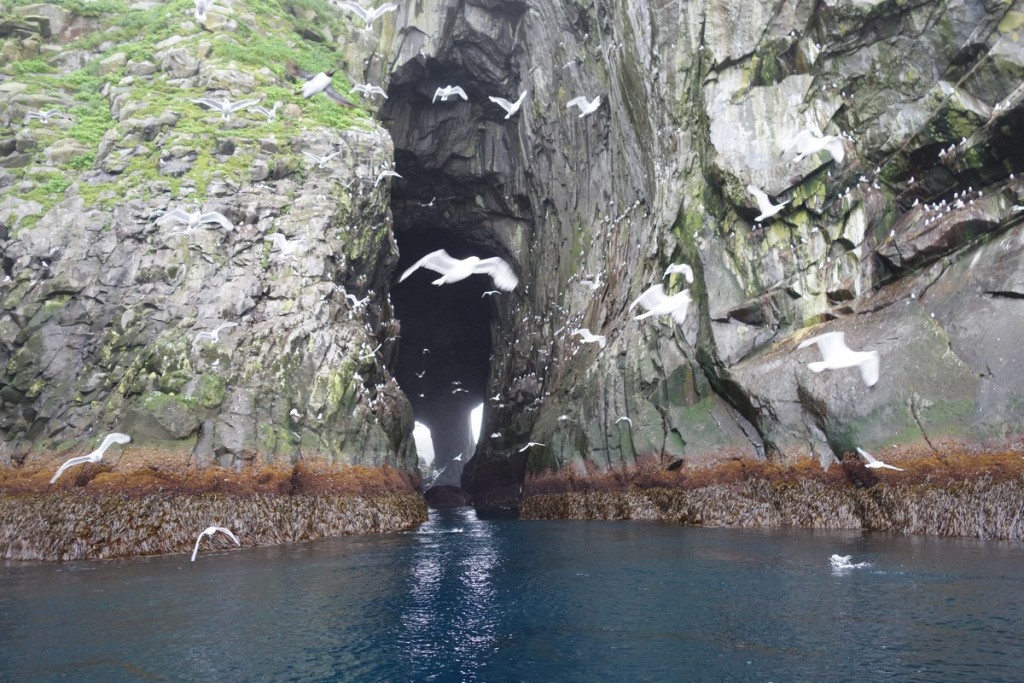 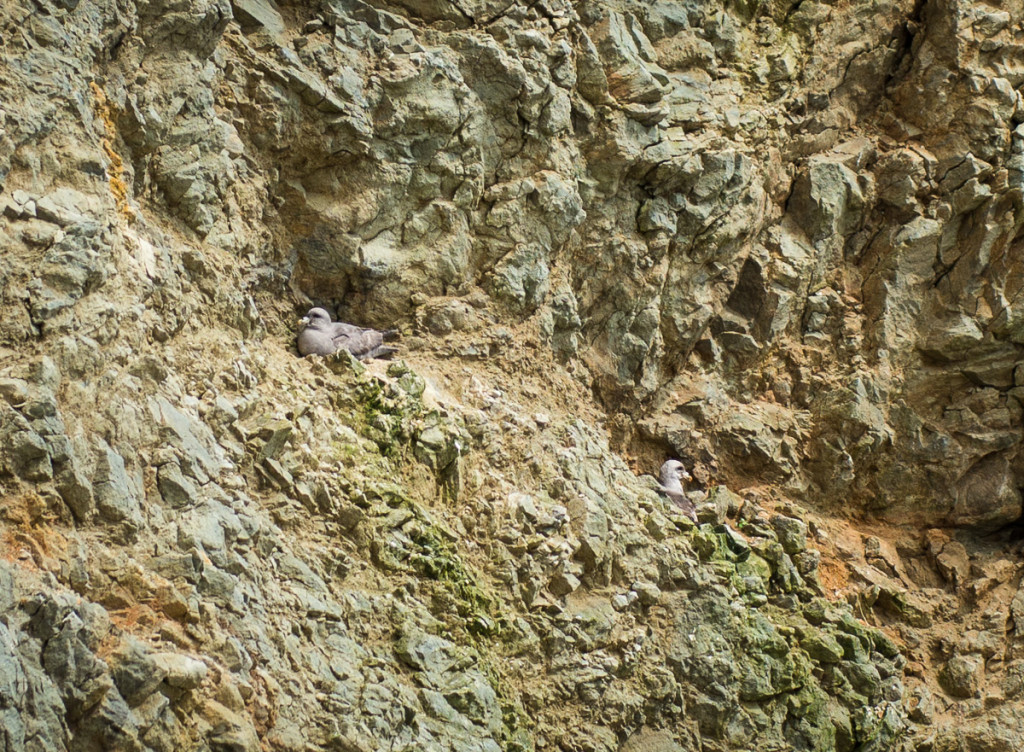 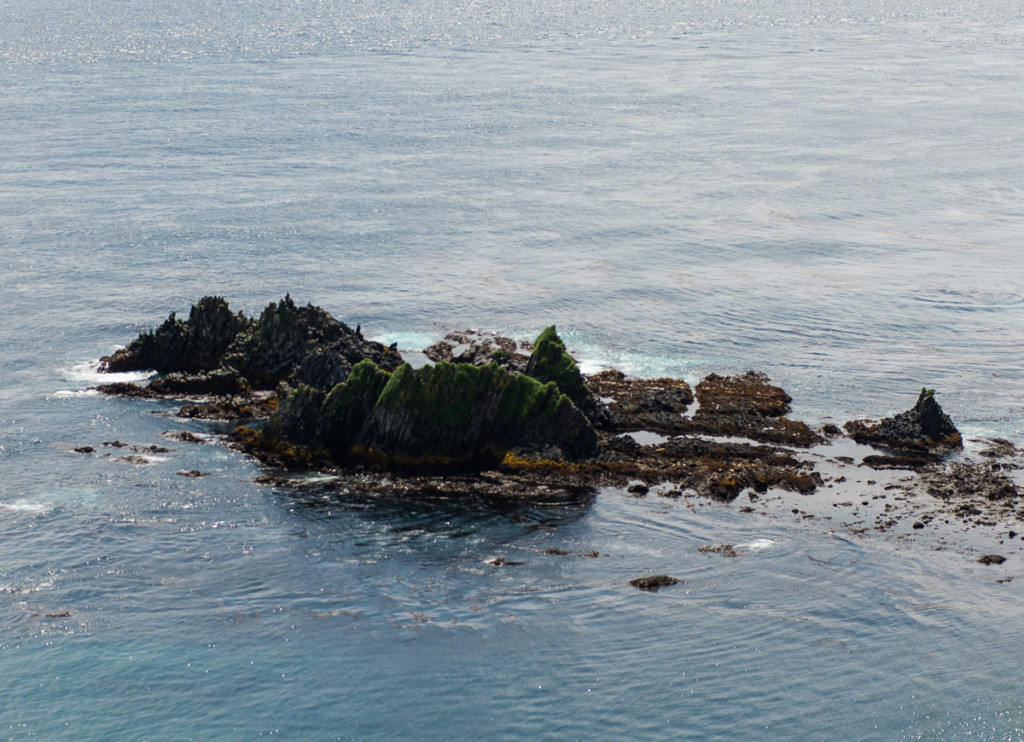 But where does the ‘island No. 14’ in the title come from?

Well, on old maps all the Kurils were numbered from north to the south, meaning each had both a number and a name. The first island (No. 1) is Shumshu – the nearest to Kamchatka; the second is Paramushir; the third – Antsiferov Island; followed by Makanrushi, Onekotan, Kharimkotan, and so on and so forth: 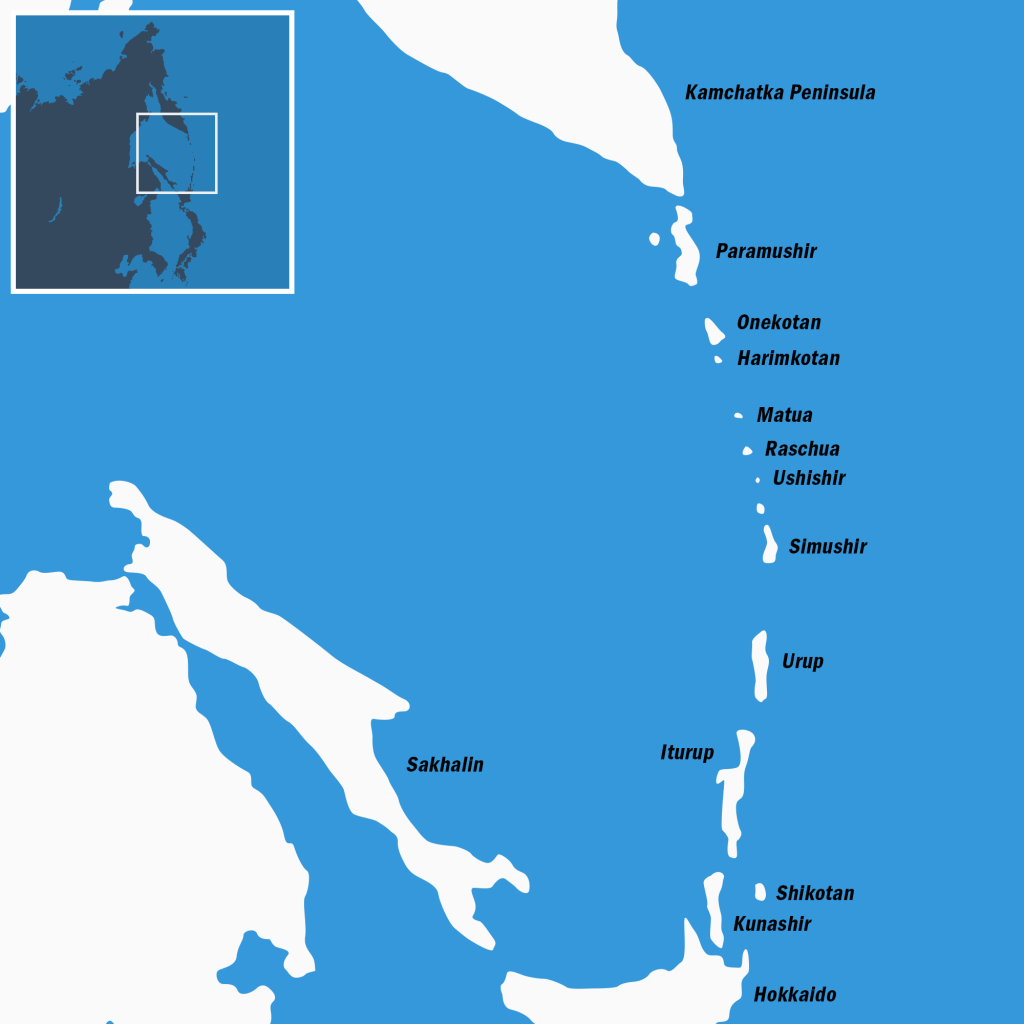 One word of warning! The Arctic foxes here are numerous – and curious!

They dig out little dens for themselves in the cliffs (remarkably none of the exotic birds had their abodes in the same neighborhoods:), and live not a bad life – propagating plenty. They’re not all that afraid of humans (or dogs, we found out), and come up close sniffing and snorting with their cheeky little snouts (they’ve also creepy yellow eyes)…

So, what’s the warning about? Don’t leave clothes or other belongings lying around – they’re very fond of marking out their territory – and items left thereon! 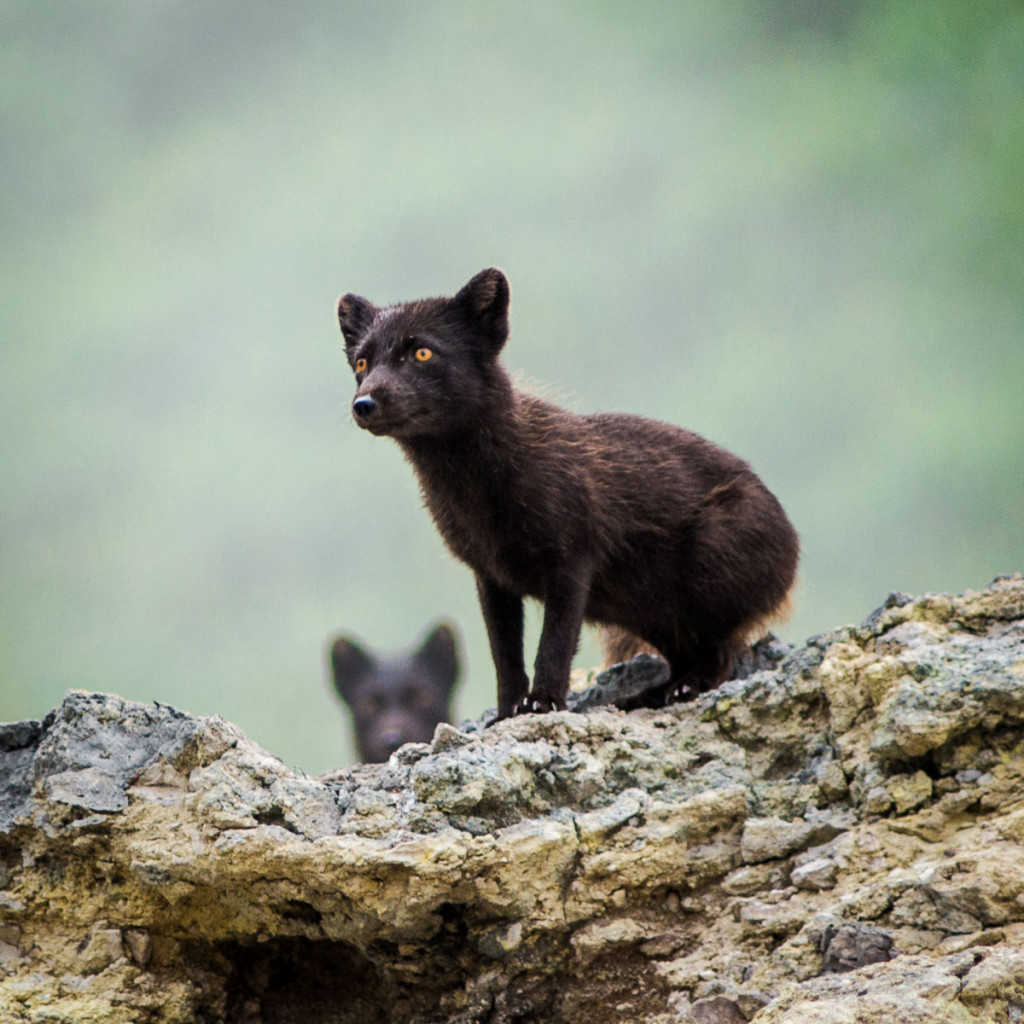 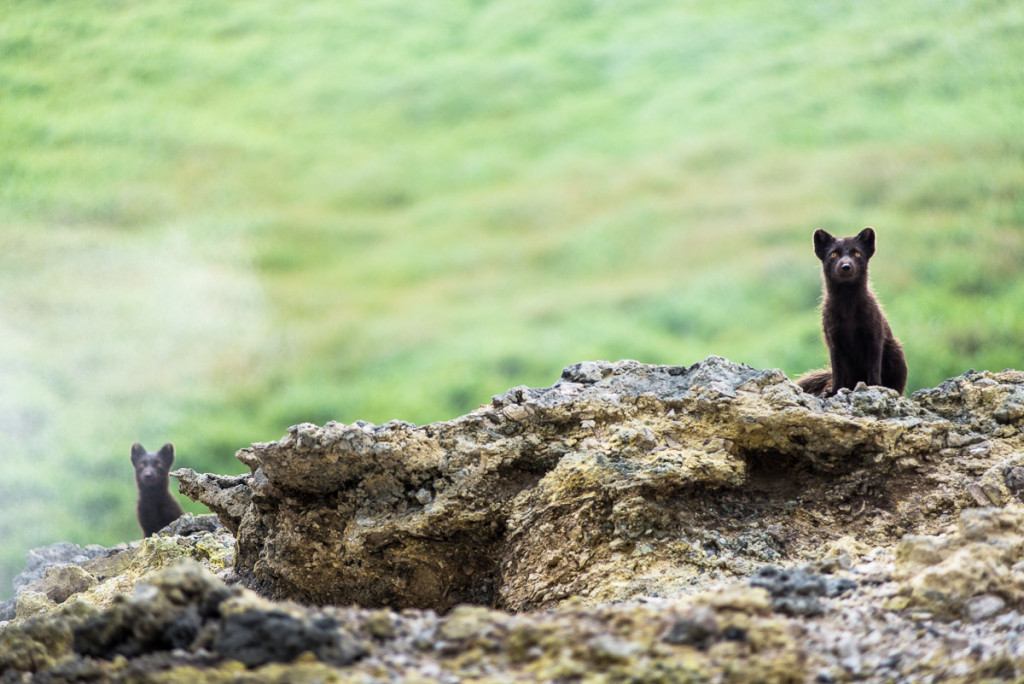 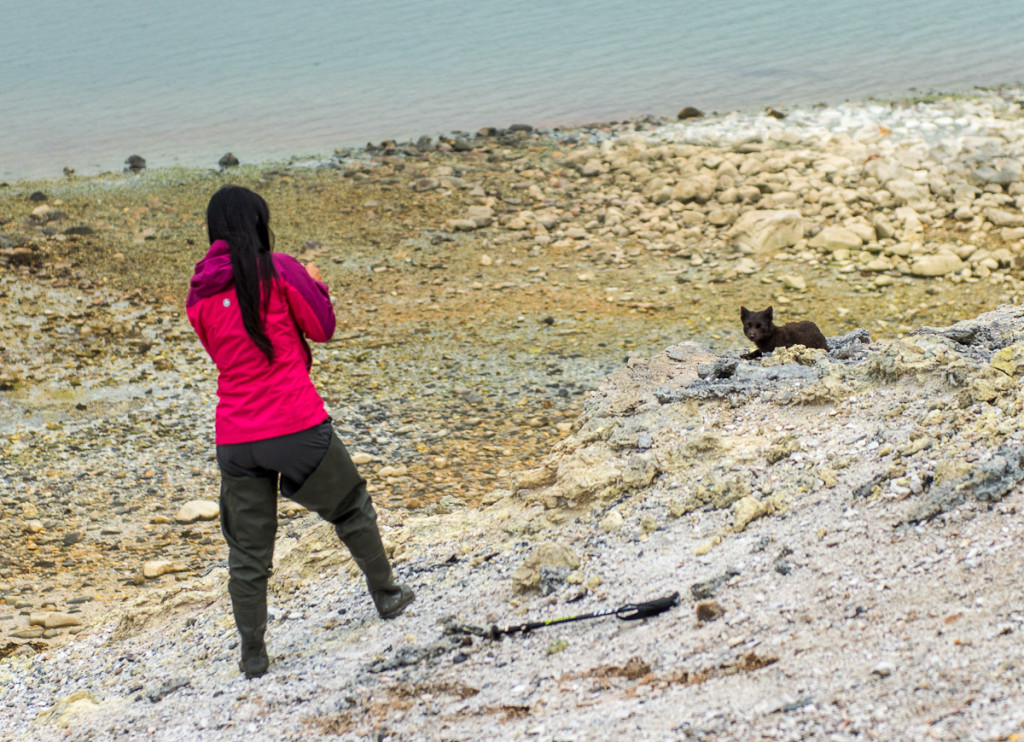 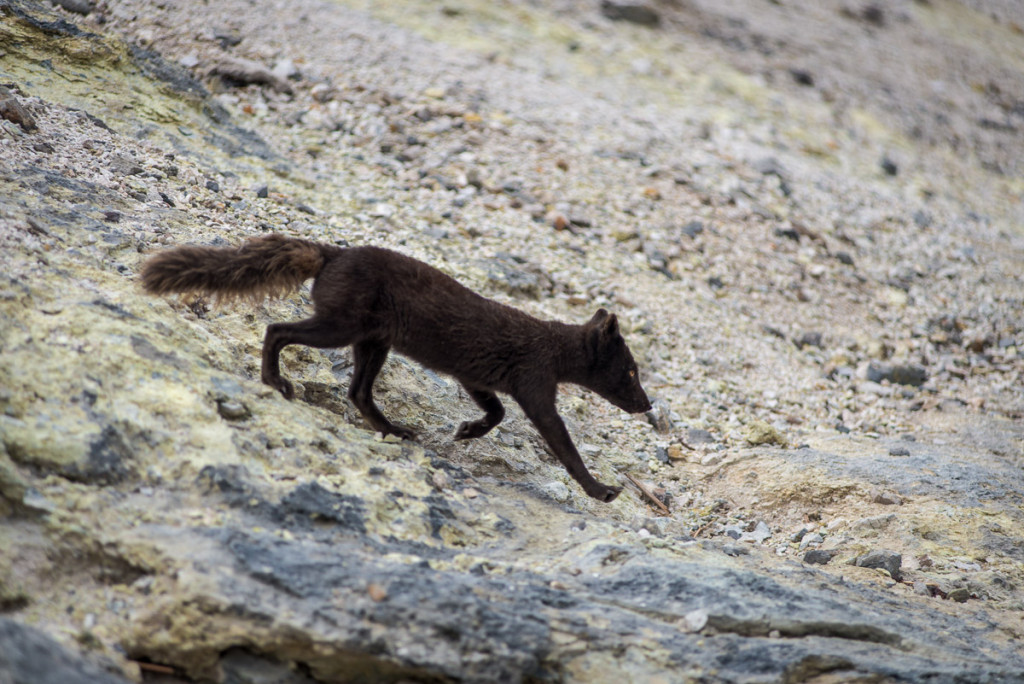 This day was our eighth on our expedition sailing round the Kurils, and one of the most memorable. Usishir – an extraordinary place. Unique. Totally recommended. 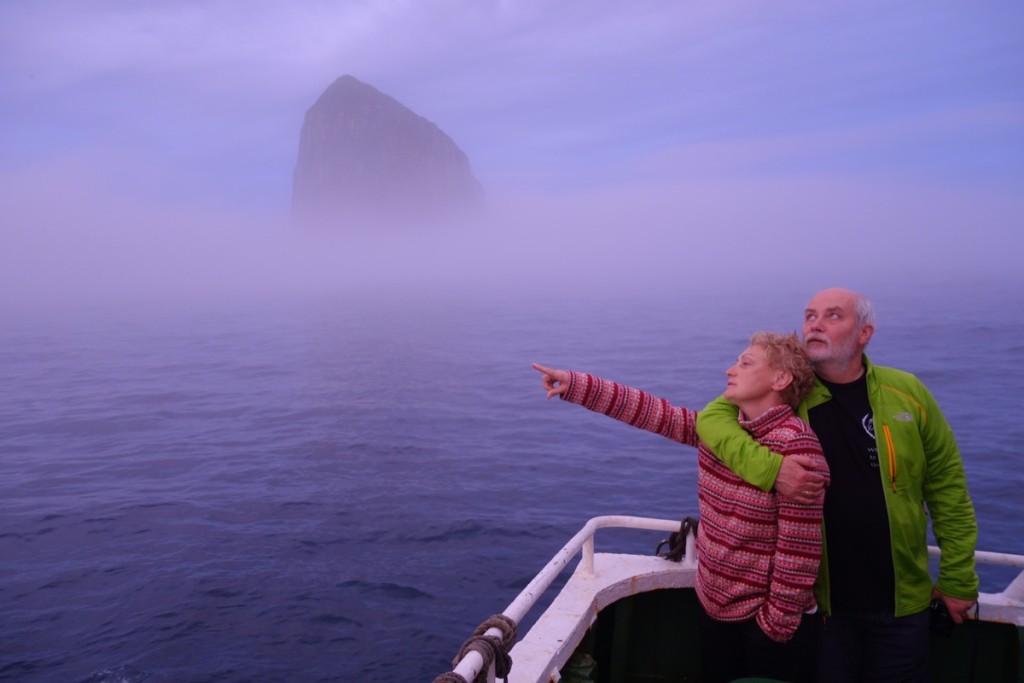