Things do seem to be getting better generally around the world on the covid front (with exceptions), but there’s still plenty of lockdown and quarantine and travel restrictions – so much so I’m still pretty much grounded: none of my usual globetrotting (be it work or non-work-related) to new, interesting, far-flung places, and my blogpost-reports thereon a short while after. But never mind: I’m sure things will be back up and running shortly. And in the meantime?…

In the meantime: archive digging – into some of the most beautiful places on the planet I’ve had the pleasure of visiting, most of which feature on my Top-100 List of Must-See Places on the Planet.

But how do I whittle that 100-strong list down to a mere dozen of the very best, most must-see, totally OMG places? Actually, it’s rather simple.

Even among the ‘elite members’ of the best places on earth, there are some many you don’t spend a great deal of time at – nor would you want to. You arrive, you are bowled over, you stroll around the place for an hour or two, you purchase the proverbial (or real) t-shirt, you place the proverbial (or real) check on your list of ‘beens’, and that’s it: all done in no time at all, and you’ll never go back, because – why would you?

But then there are the places – in particular, the views – you just want to get back to, sometimes over and over, and once you are there you want to stay there, gawping, forever. The paysages that hypnotize, take the breath away, blow the mind; and sometimes there’s a bonus: those paysages change over time. And it is these ever-so-special places that make up this mini-series on the best of the best of the best places on the planet…

So I’ve shaved and sheared and pruned my Top-100 and been left with some 20 best-evers: the world’s most magical mountains and volcanoes, the most delightful deserts, the most wonderful waterfalls, and so on in that vein. Yes, and by ‘that vein’ I mean: natural wonders of the world – nothing man-made (maybe a Top-20 of those comes later?!).

And I won’t be ordering the 20 by snaking round the planet as I’ve done in the past. The ordering this time will be a little different. And I’ll start off with nothing less than… the most fabulous, most fantastic, most grandiose natural object on the planet!

Of course, it’s the most fabulous, most fantastic, most grandiose object on the planet – in my opinion, for there can be never be full objectivity here. All the same, it is the most beautiful natural landscape I have beheld personally in my life ever. And here it is…

A monumental spectacle. A ‘live’ picture constantly changed by the unbelievably unstable weather conditions of the Kurils. A colossal volcanic caldera with a lake inside it, out of which rises the cone of a new volcano:

A white rainbow sometimes appears nearby: 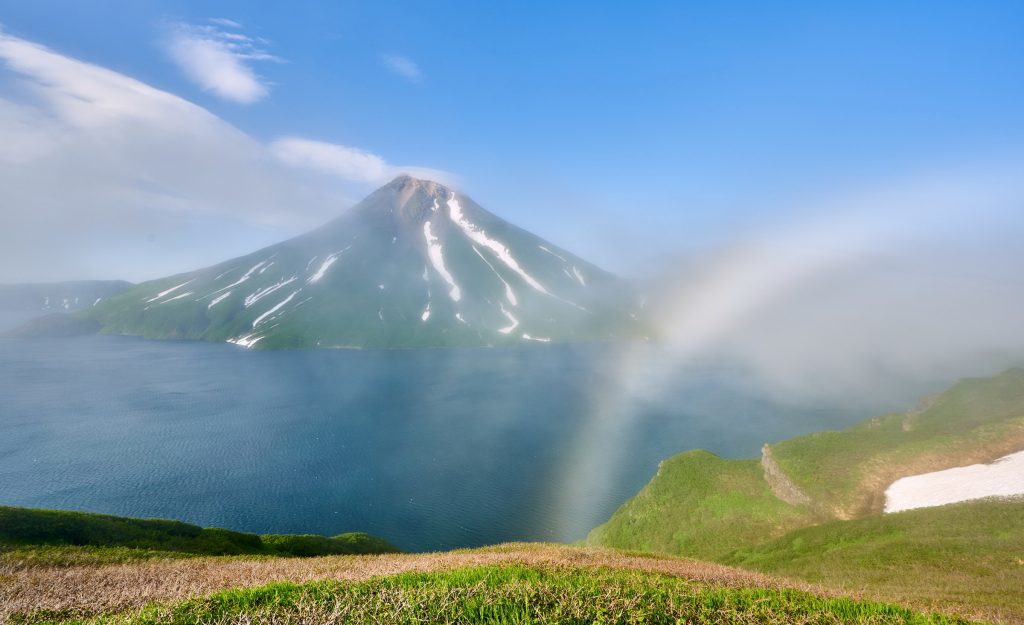 How the volcano looks changes drastically depending on the angle you view it from:

Alas, you can’t do a full rim-walk as much of the caldera’s surface is covered in prickly shrubbery that’s too dense to walk through. Also, there’s only one spot up around the top where one can fill up flasks with drinkable water. Sure, a path along the rim-top would great, but there simply isn’t one. For you have to remember this is a very remote and inaccessible spot. The nearest populated center is Severo-Kurilsk nearly 200km away, and the only way of getting here is by boat or helicopter. Then there’s the climate: extremely changeable. Often, there’s such a thick fog hanging over everything that you can’t see anything at all! So any visitor needs to factor in plenty of waiting time at the site. Indeed most of one’s time here will be waiting time: waiting for the fog to lift and the volcano to become visible – for perhaps half-an-hour before the fog reappears! Really! In practice this means climbing to the top of the crater, setting up camp, and waiting, and sooner or later the ‘movie’ starts. Such a shame it comes in installments of less than an hour, as you could sit watching it forever.

Though it’s not all that high, getting to the top of the ‘new’ volcano in the middle of the lake is no easy matter. First your need to cross the lake, so that means you need to bring a dinghy with you. You need to take it down the steep slope to the lake, traverse said lake, and only then start your ascent, all the while remembering the weather could take a sharp turn for the worse and cause all kinds of trouble – if not danger.

Back in 2019, two of the members of our expedition made an attempt: they got as far as the other side of the lake, but only half-way up the volcano. Still, not bad for a first try. Next time it’s the peak or nothing! Wait; even better: we get to the top, and then spend the night! Then, hopefully we’d get the double-whammy of both sunset and sunrise!

A visit to Krenitsyn comes with a bonus: around 250km to the southeast there’s the Kuril volcanic island of Ushishir, which offers similarly unique and other-worldly volcanic scenes:

Just like with Krenitsyn, the picture changes from different angles:

And this ‘bonus track’ comes with a bonus of its own: this here island of rock, which, when you get nearer, you find is covered in seagull nests: 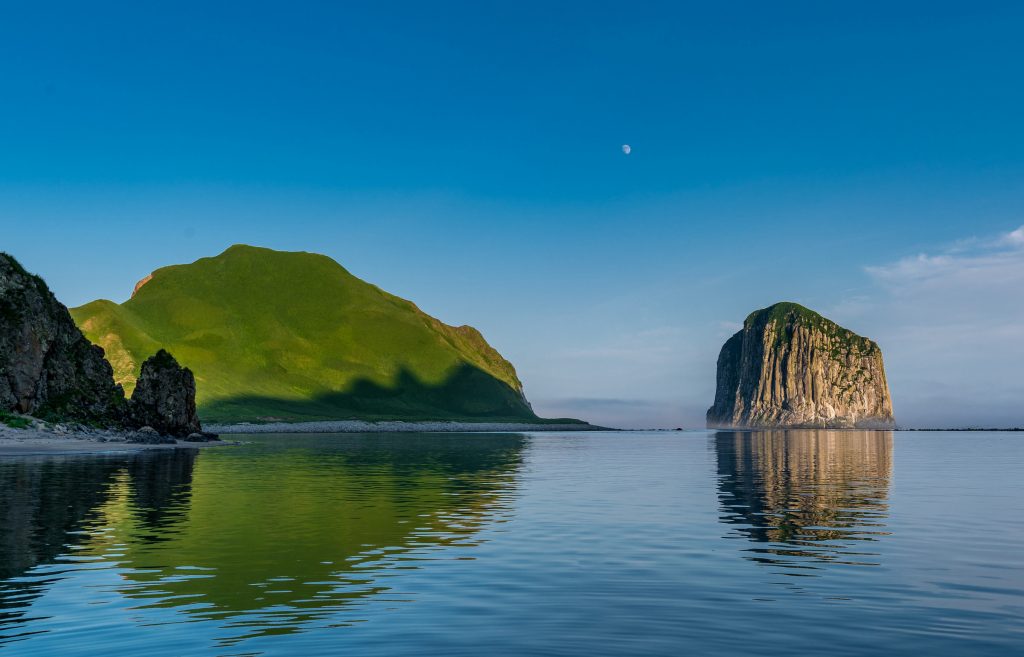 Ushishir really is Seagull Central. The place is teeming with them. Wherever there’s a ledge or somewhere else flat they can stand on – there they are. Even here (up the side of a tunnel with a rather spooky light effect); look: 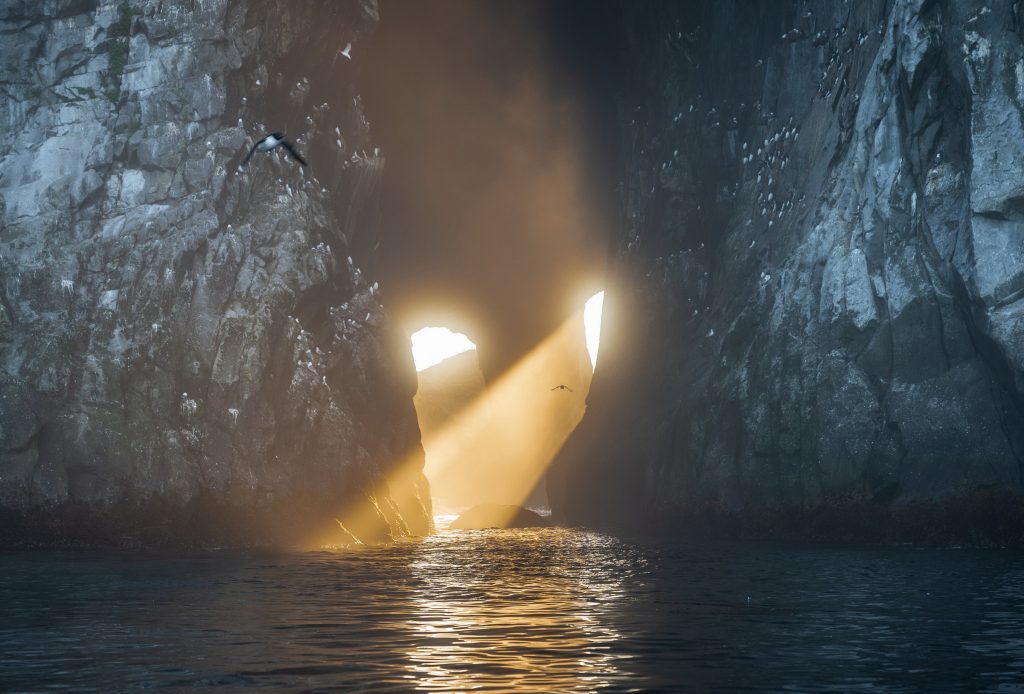 For one reason or another I’ve never made it to the upper peaks of Ushishir – even though I’ve been three times to the island. All the more reason to get back – this time with more time set aside for the inevitable wait for the clement weather. And maybe we’ll pitch our tents for the night up there too, especially since from up there we’ll probably be able to see a full six Kuril Islands: from Raikoke down to Simushir: 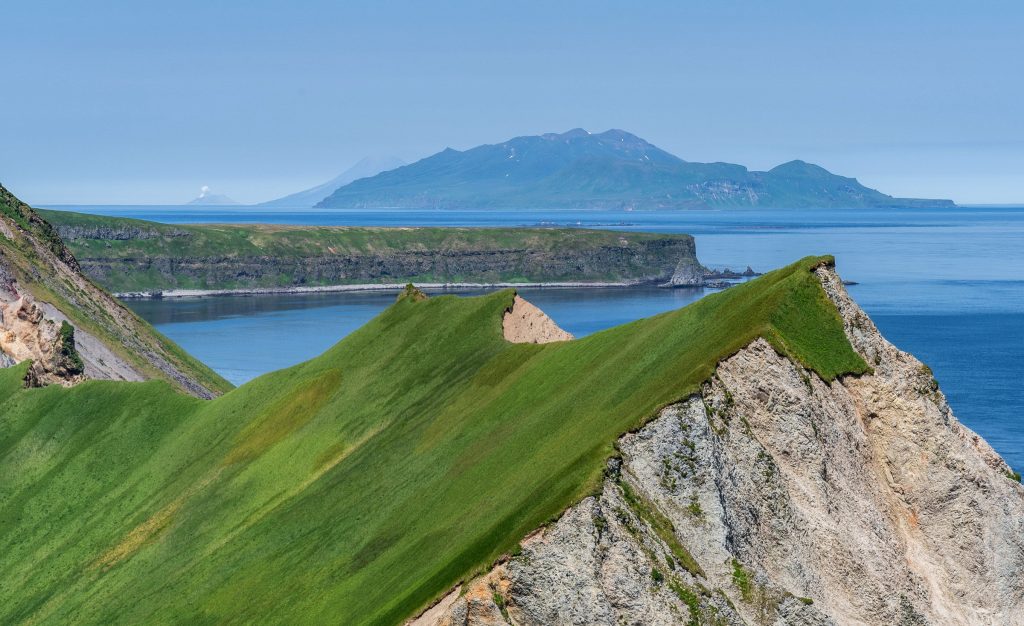 And that is that folks: the first – top – entry in my Top-20 – done. Hmmm. I’ve just written above (and earlier in this post) that there’ll be around 20. But I’ve had a re-think. Let me get it down to the next ’round’ figure: 12, aka – a dozen. I did have a go getting it down to 10, and failed. So 12 it is! But first off – important news: this meager quantity of greatest hits means… this is the last dose of volcanism for the dozen! Accordingly, so as not to leave them out completely, there follow the volcanic runner-uppers that didn’t make it.

Kamchatka’s Ksudach volcano. An almost perfectly round old volcanic caldera that’s around seven to eight kilometers wide. Just imagine the bang that made when it blew its top?! Just like Krenitsyn – there’s a baby volcanic cone growing up inside, while it goes one further regarding its caldera lake – literally: there are two of them – one with a sandy beach and with piping hot water! 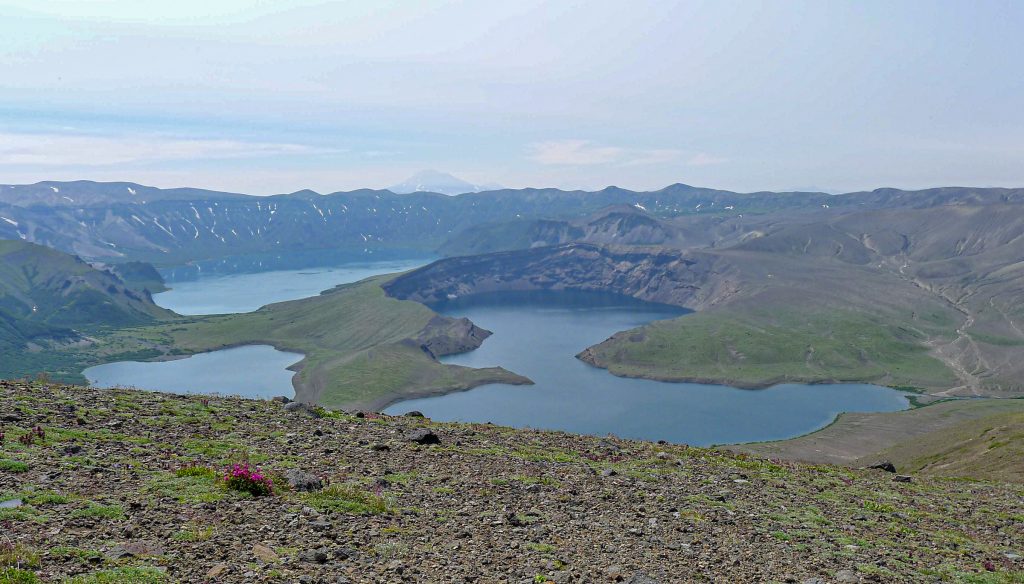 You need to get up to the top of the caldera if you’re ever here: the views – oh my grandiose: 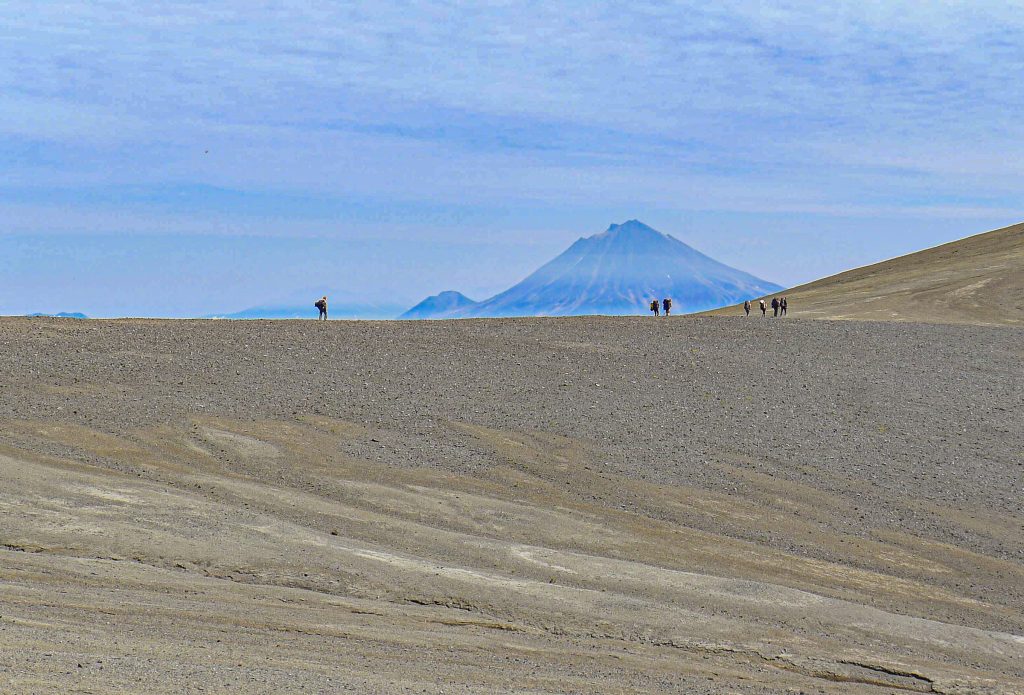 Best of all is spending two days here to be able to walk the full perimeter of the caldera. That’s what we did way back in 2012. Unlike the mostly impassable bush of Krenitsyn, here it’s smooth sailing strolling practically all the way – hurray! The views both inside and out – Martian! 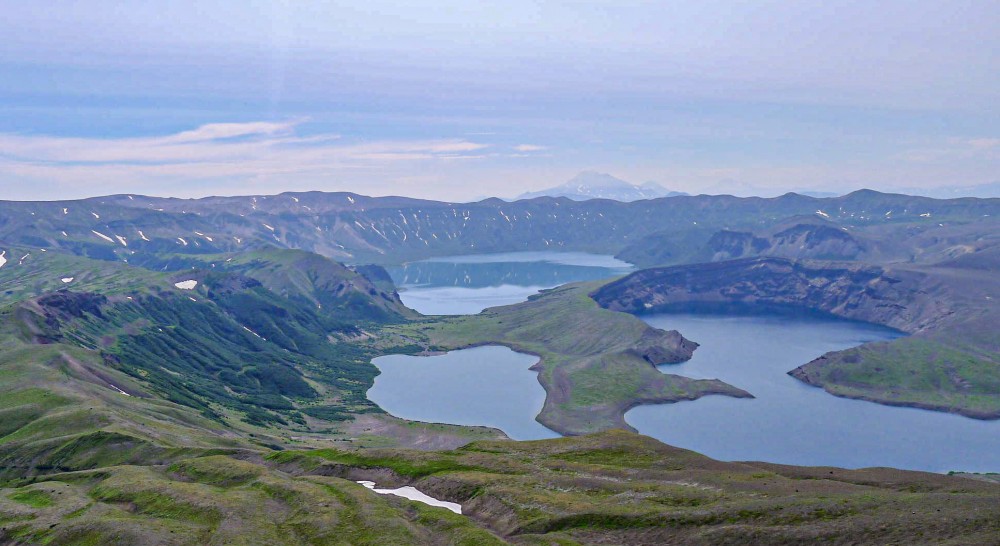 Ever since that first trip I’ve wanted to get back for more walkies – and to embellish my photo collection of the volcano – but both times we’ve returned since the weather caused us to call off our Ksudaching (. In 2015, for example, we stopped off on the island but the views were spoiled by the persistent low cloud – lower than the top of the caldera: walking around it would have been largely pointless. 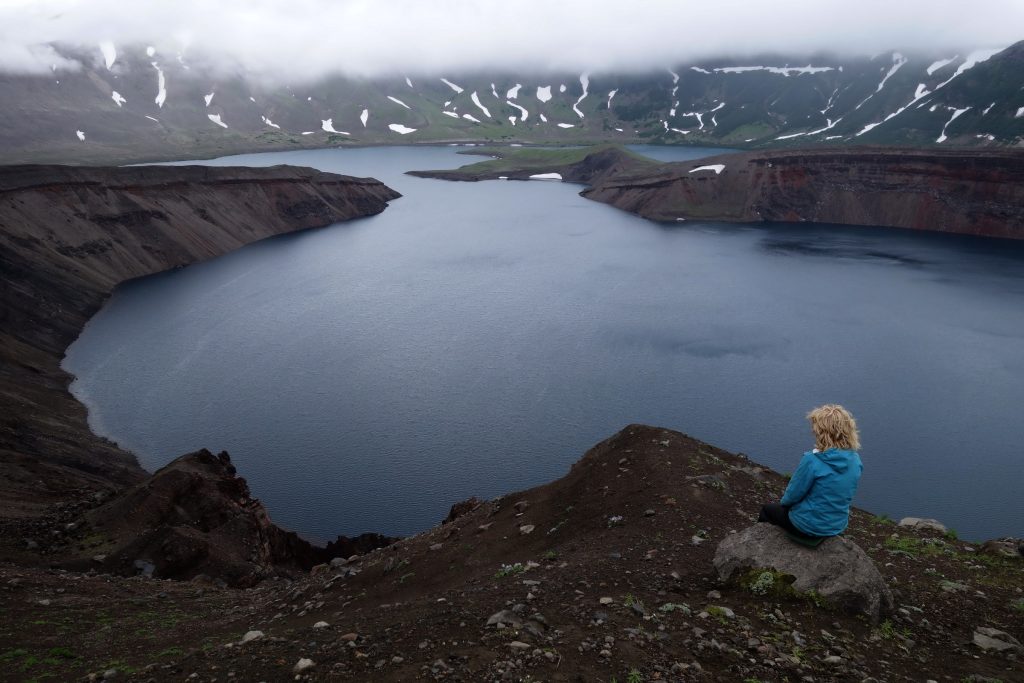 The other must-see best-of-the-best volcanism in the world that didn’t make the list is:

Mount Bromo and the Tengger Caldera in Indonesia. Several volcanoes all near each other. A sunrise to beat all other sunrises – and I’ve seen a few sensational ones. What happens is the stars are still twinkling in the sky, but it’s getting light. What? Mind: truly blown! ->

The picture changes over time during sunrise: 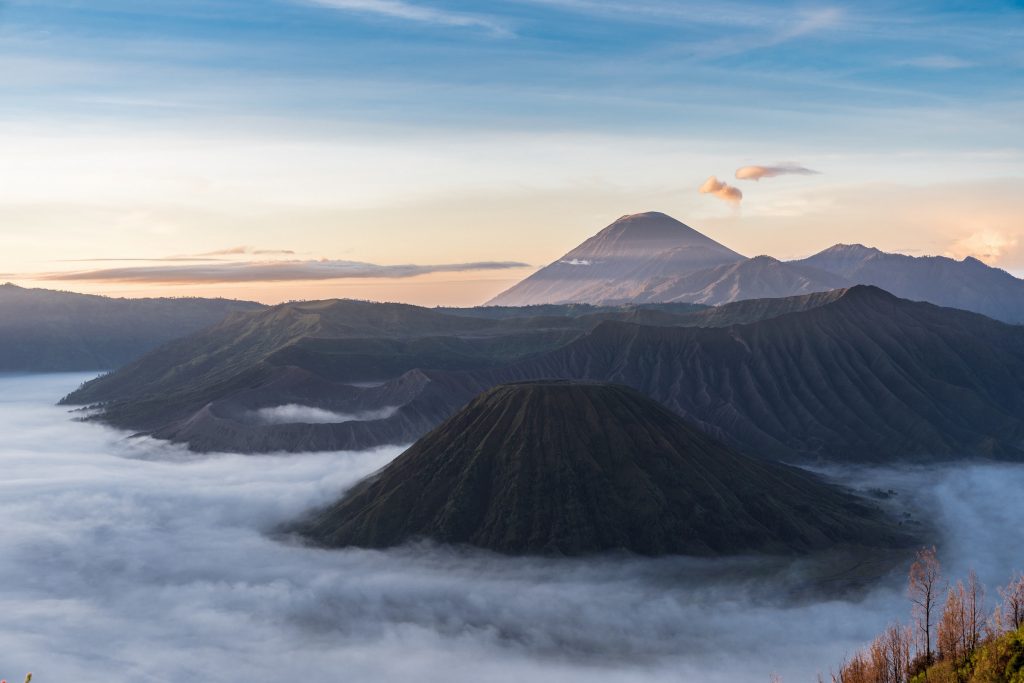 And in the background Semeru volcano puffs out smoke occasionally: 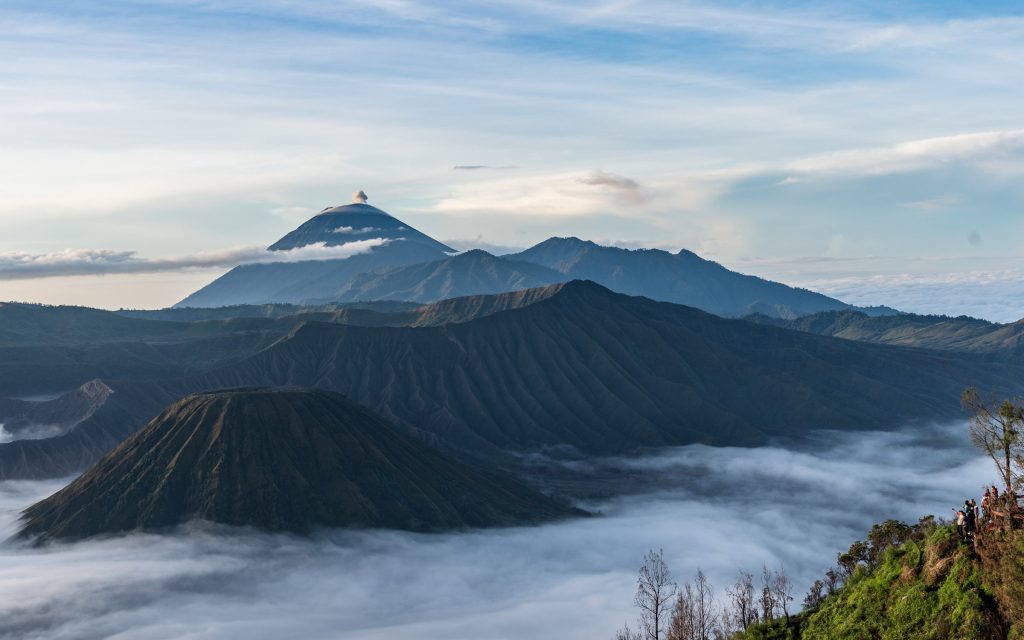 Just like in Kamchatka and the Kurils – you need to be lucky with the weather. If you’re not – you’ll see precious little. If you are – as we were: woh!

And that’s all for today folks. But I’ll be back with another Top-12 entry shortly…