Every single island of the Kuril archipelago is volcanic. Each island came about due to volcanism; and most islands have one, two, three or more volcanoes on their territory, some being among the most beautifully symmetric (e.g., ideal pyramids) in the world. Many of the volcanoes are active – with lava-spewing eruptions occurring regularly. One such active island-volcano is Raikoke – an island with a real checkered (green and black – as you’ll see:) history – literally. 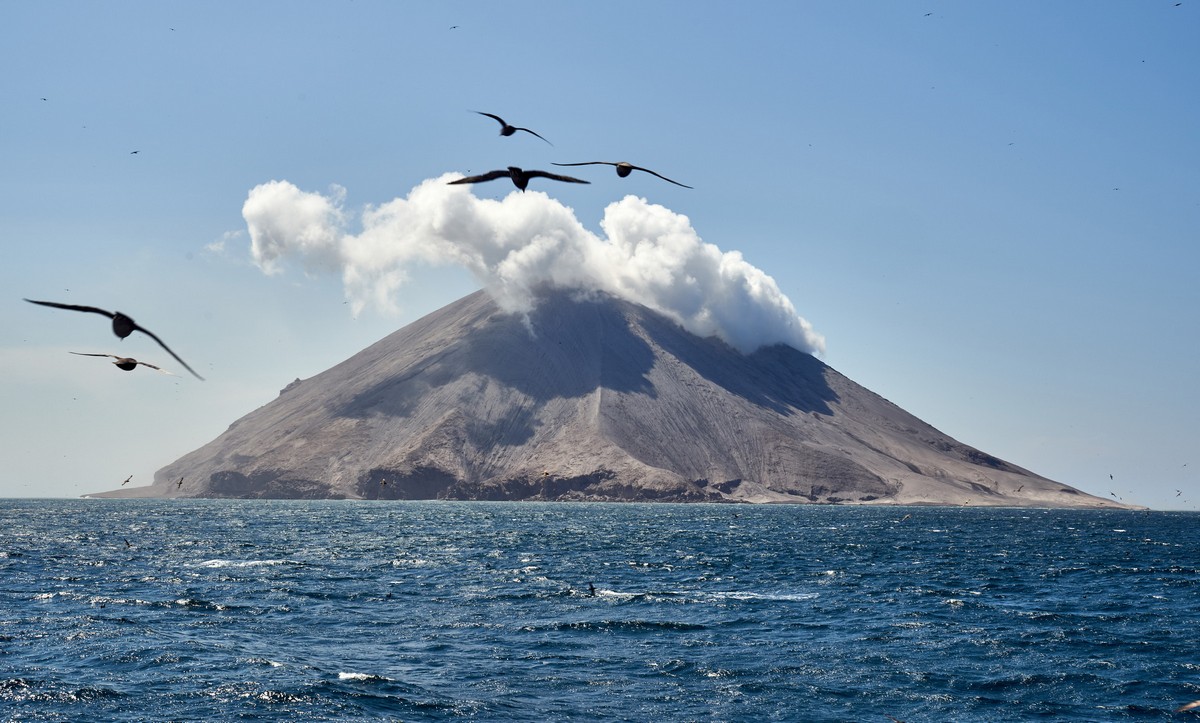 The name of the island comes from the Ainu language, and means ‘Hell Mouth’. Yep – I don’t think I could have thought of a better title: 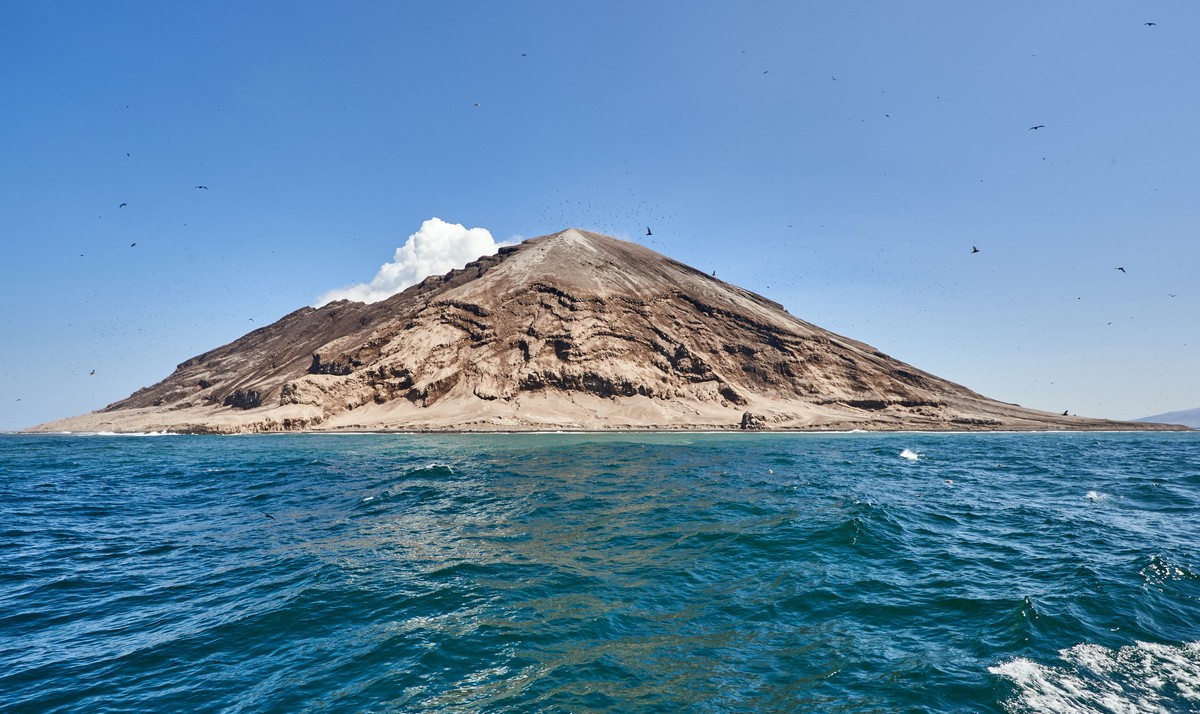 …Not that you can see the chain-smoking if it’s overcast: 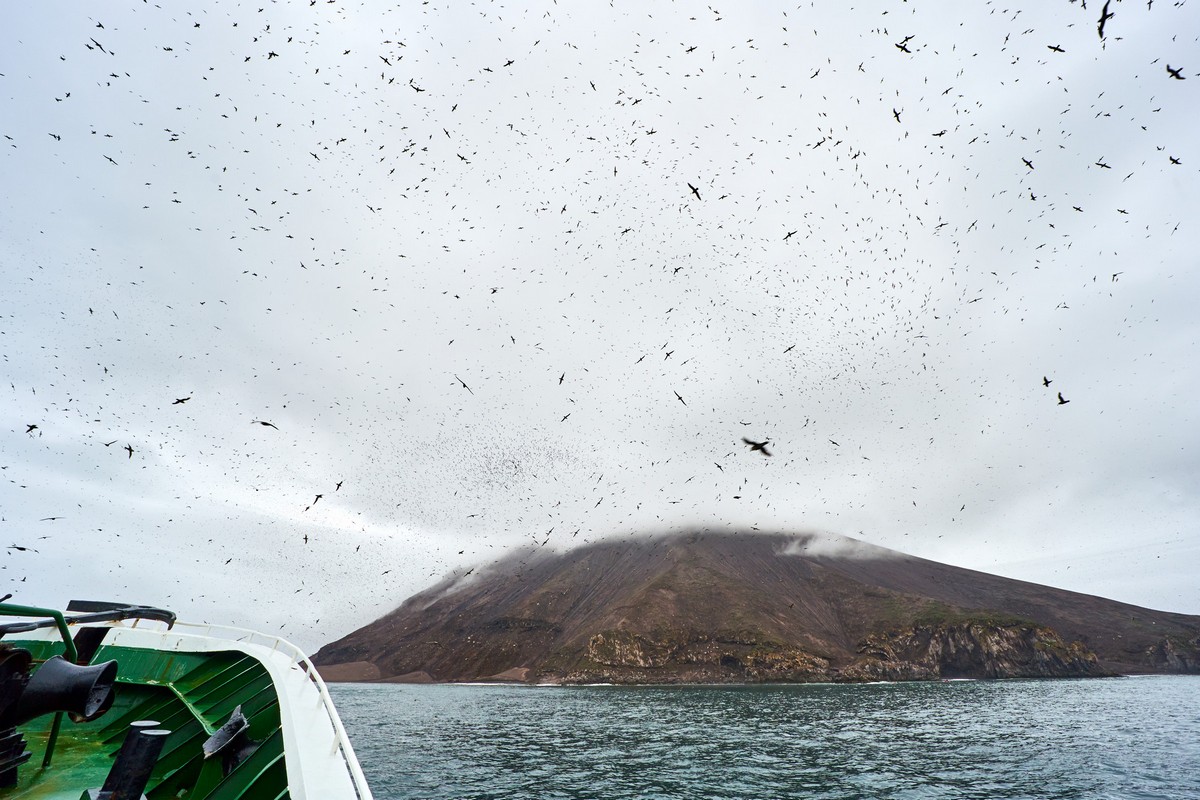 All righty. Let me get to the most interesting bit; and that is: the last time this volcano erupted was in June of this year! In fact there were several explosions, which were heard scores of miles away, accompanied by a massive emission of volcanic ash – easily visible from space: 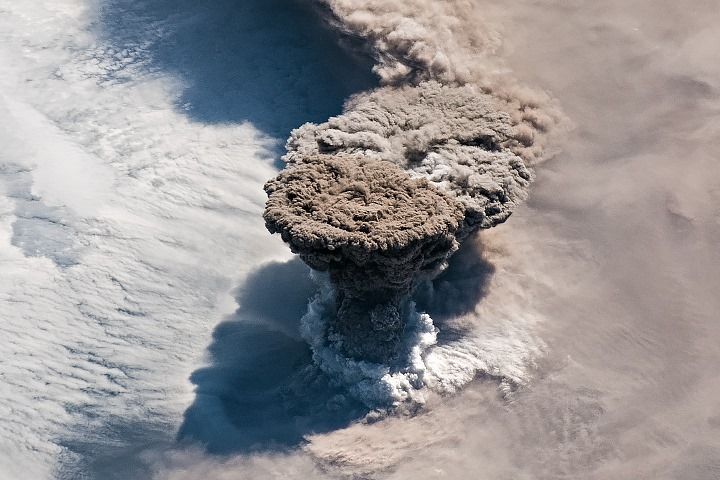 And now – witness testimony and evidence!…

Vladimir Burkanov – local zoologist specializing in seals, who accompanied us on the first part of the expedition (from Kamchatka to Sakhalin), and also the head of a project studying the sea lions of the northwestern Pacific. He was ‘lucky enough’ to have been near the eruption. So near, in fact, his boat got coated in volcanic ash:

The second witness – Nikolai Pavlov, general director of Vostok Tour, the company that owns the Athens – our boat. He’d been on Raikoke many times, knowing it to be covered with rich green vegetation, like this:

Yandex recalls all that greenery too: 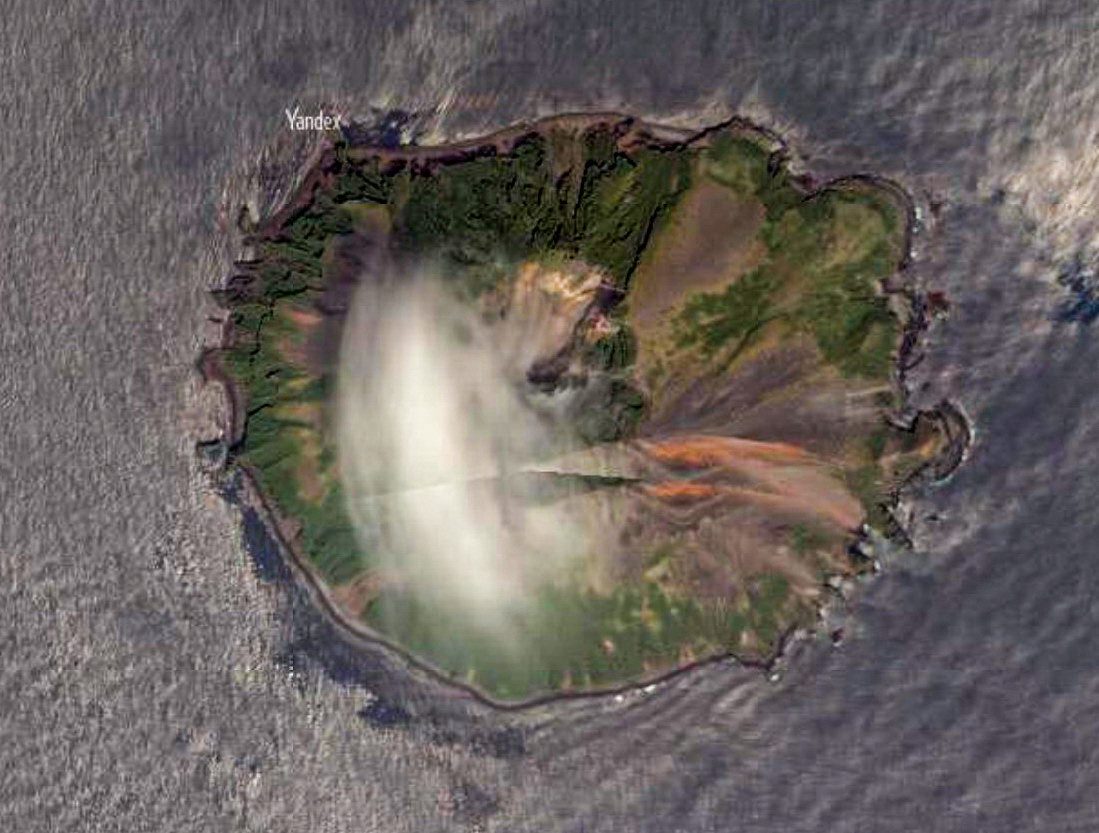 But now, since the eruptions, all that green has disappeared: 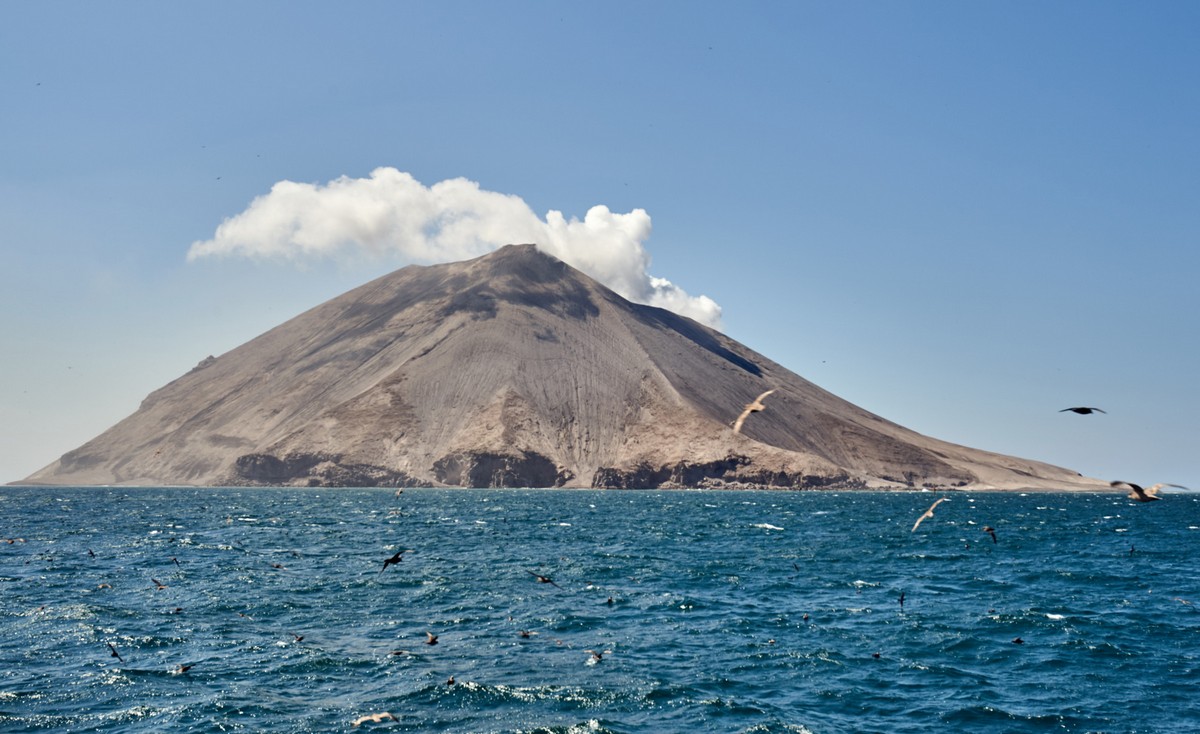 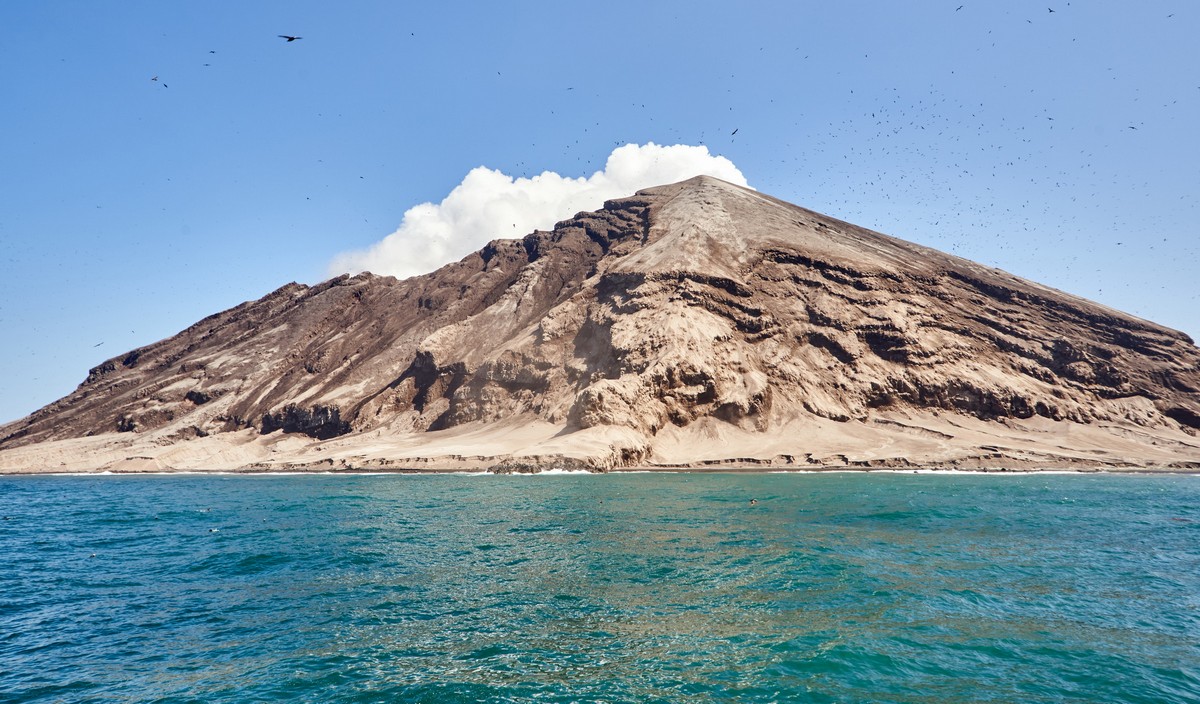 Btw, Wikipedia states that, ‘…fatalities from the eruptions […] during the 1778 eruption [totaled] fifteen […] killed from falling lava bombs.’ Those 15 were sailing past Raikoke – just like we were. Eek!

There’s a colossal colony of different types of birds here. The place is overrun with them:

How they survived the volcanic explosions I’ll never know… 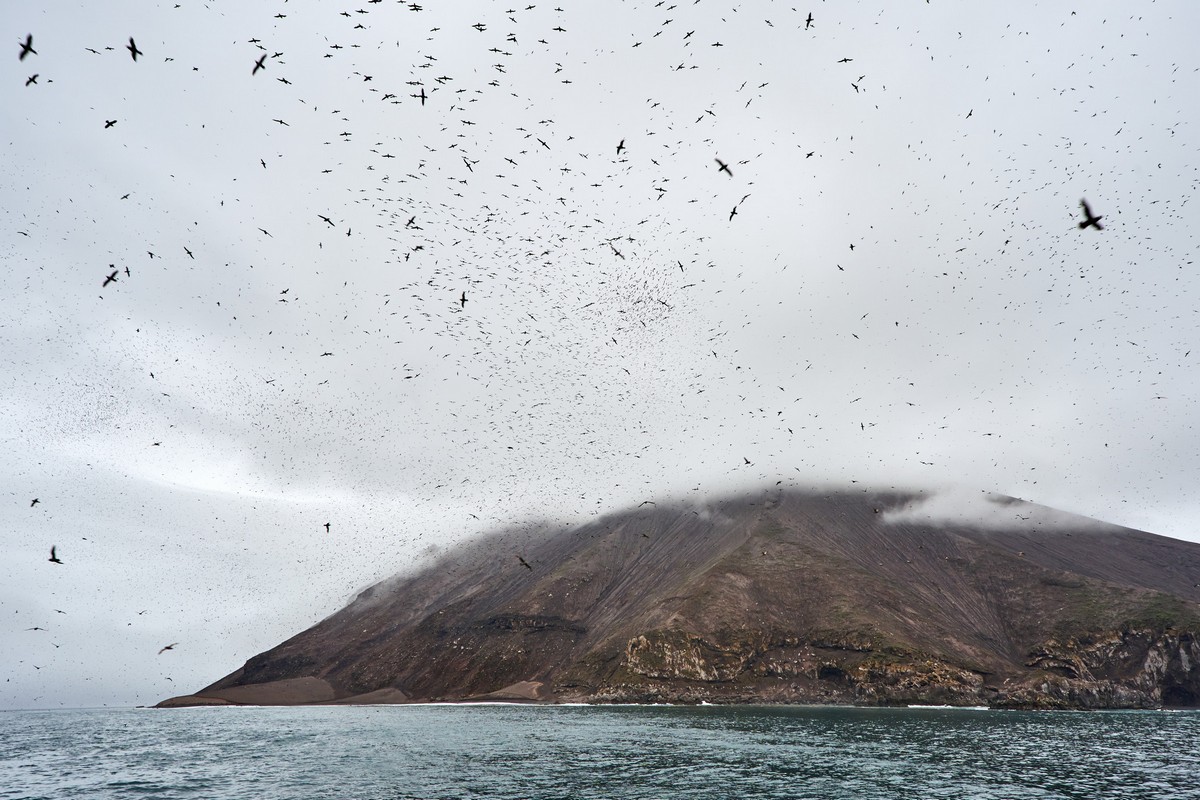 …Maybe they all went deaf? 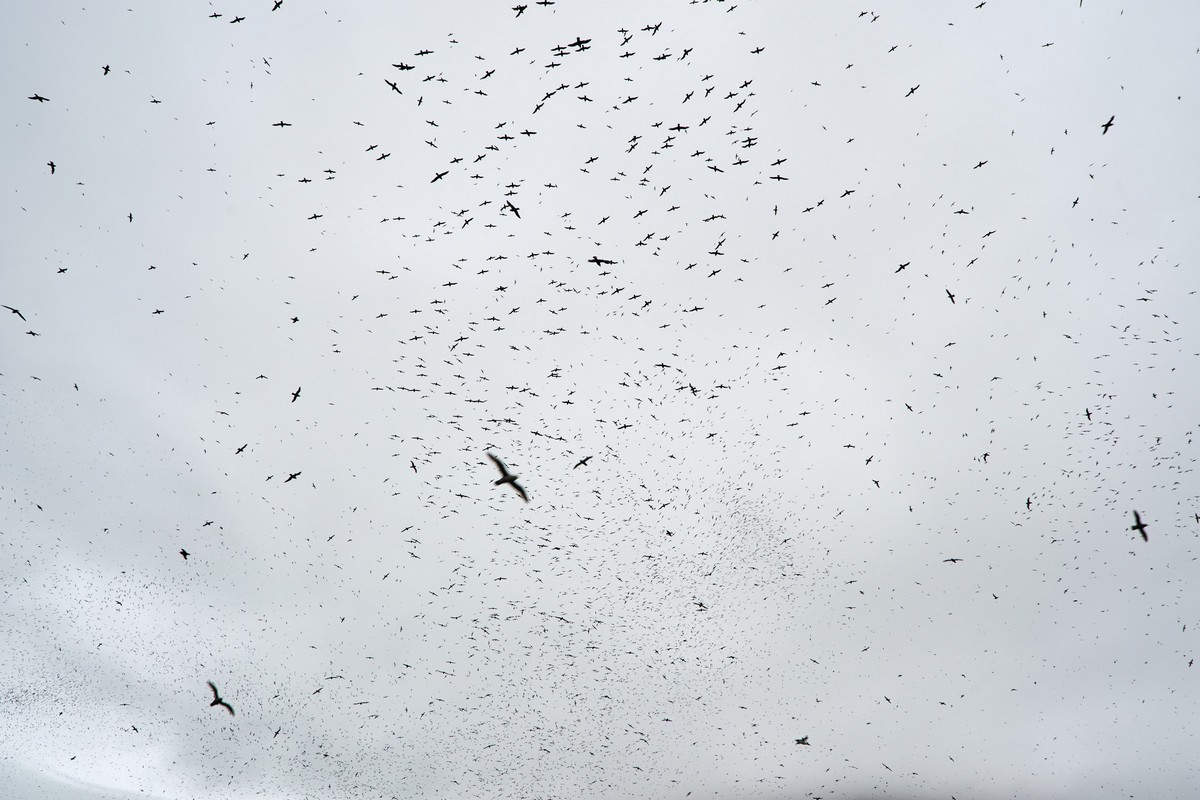 More on that: on the other side of the volcano – the one away from the explosions we could see bird nests up the side of the volcano. Unfortunately you can’t see them in the pic – but they were there! Again – how did they survive? Another mystery… 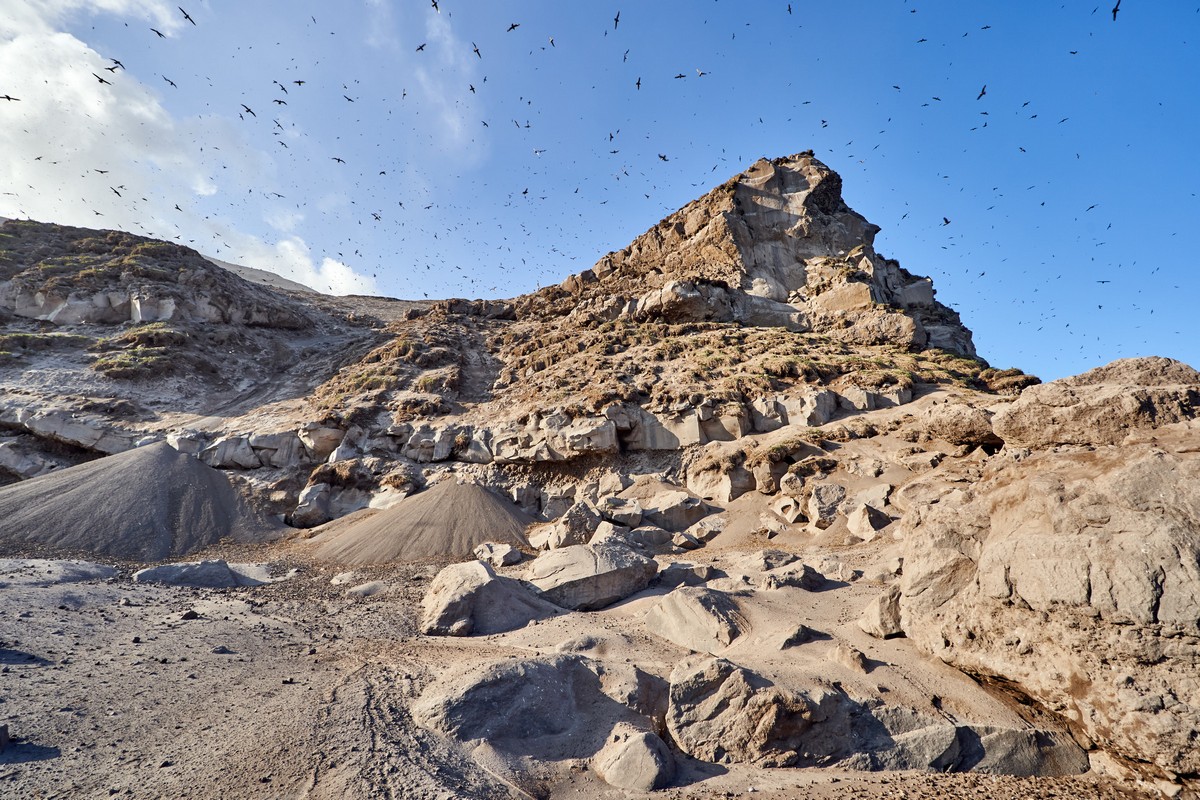 The seals were affected much worse, apparently. There were many more of them before the eruption. 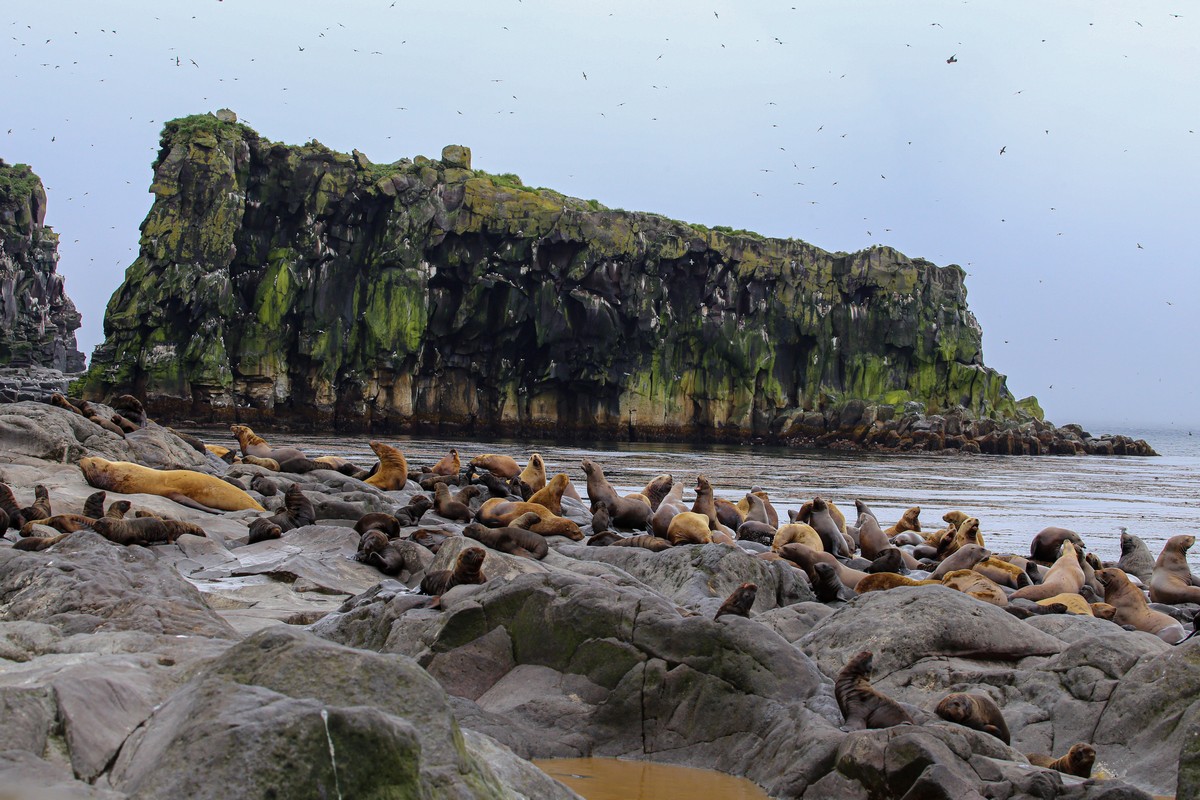 At a former breeding ground there were just one or two left (.

We land on the beach of fresh volcanic ash: 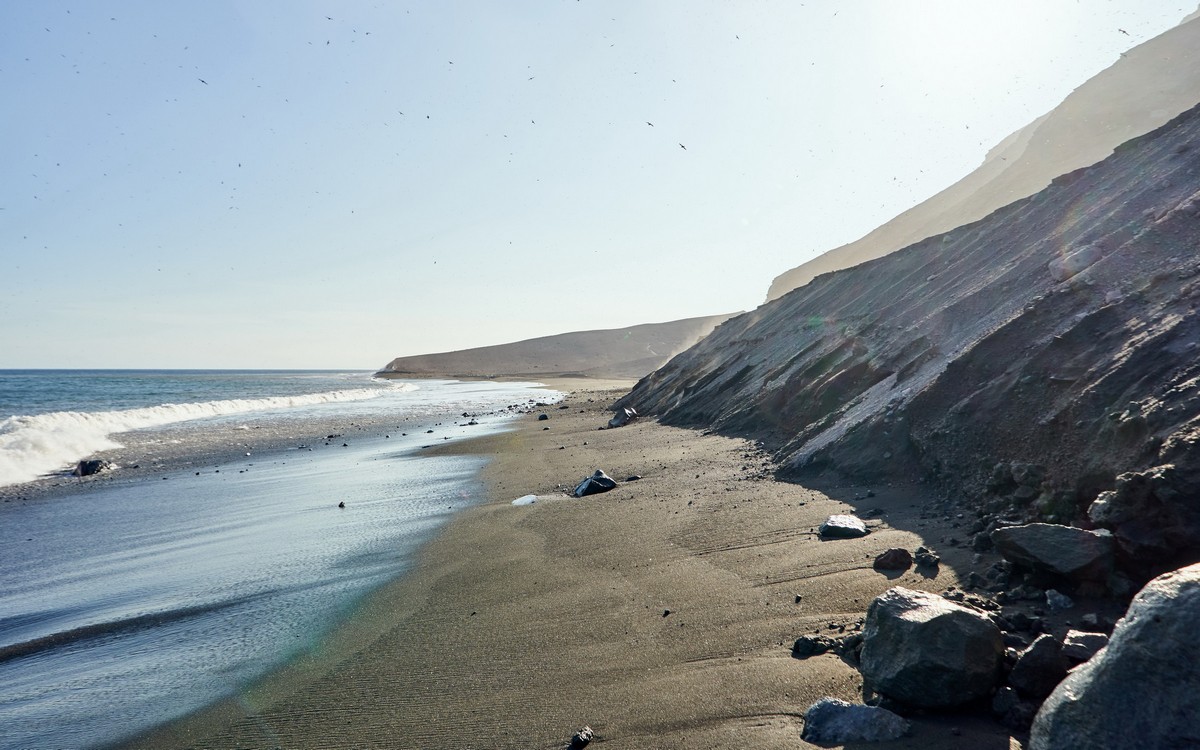 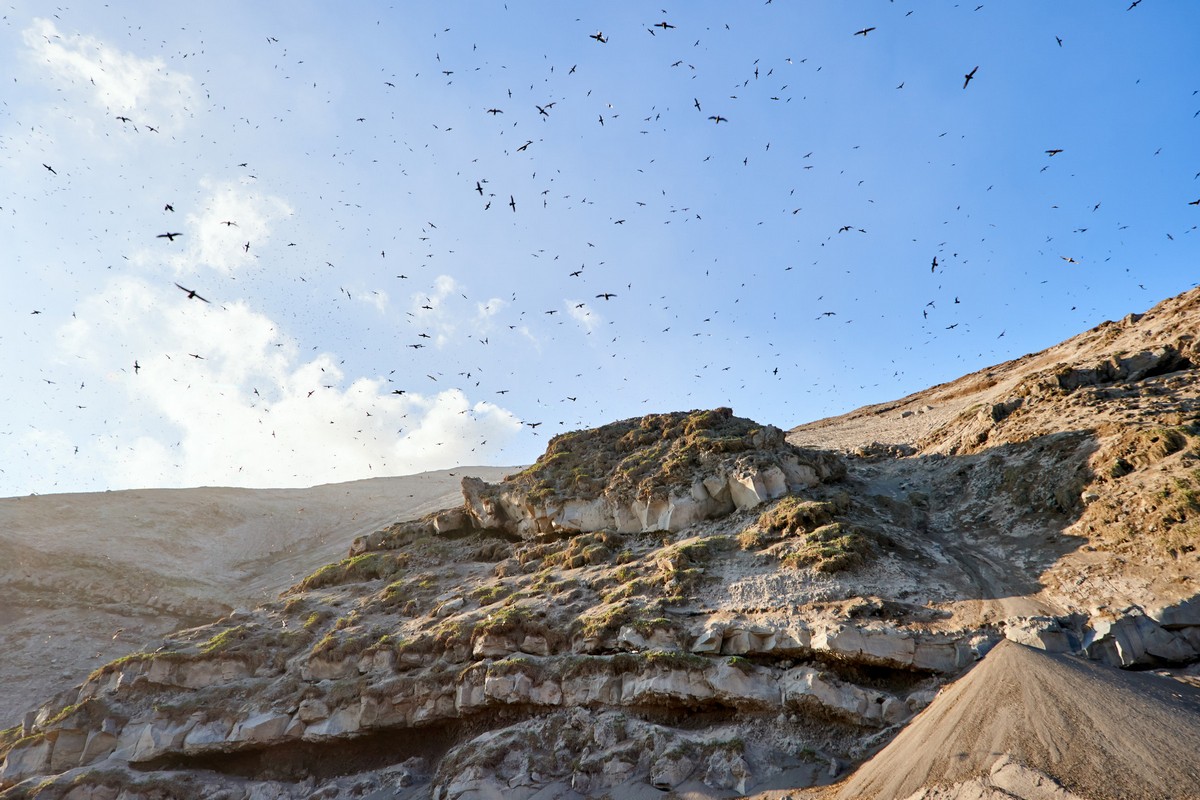 The shore wasn’t smoking any more (right after the eruption everything was steaming, according to witnesses), but the ash was still hot.

There’s Matua on the horizon: 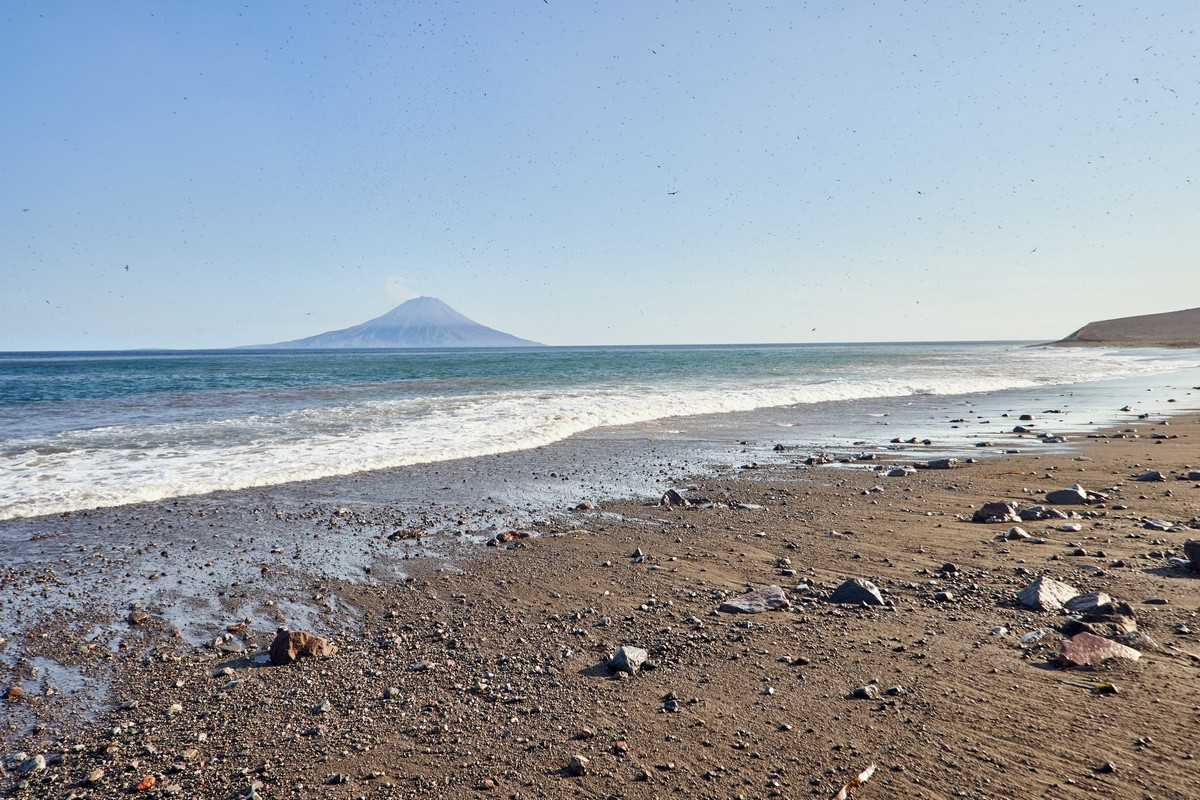 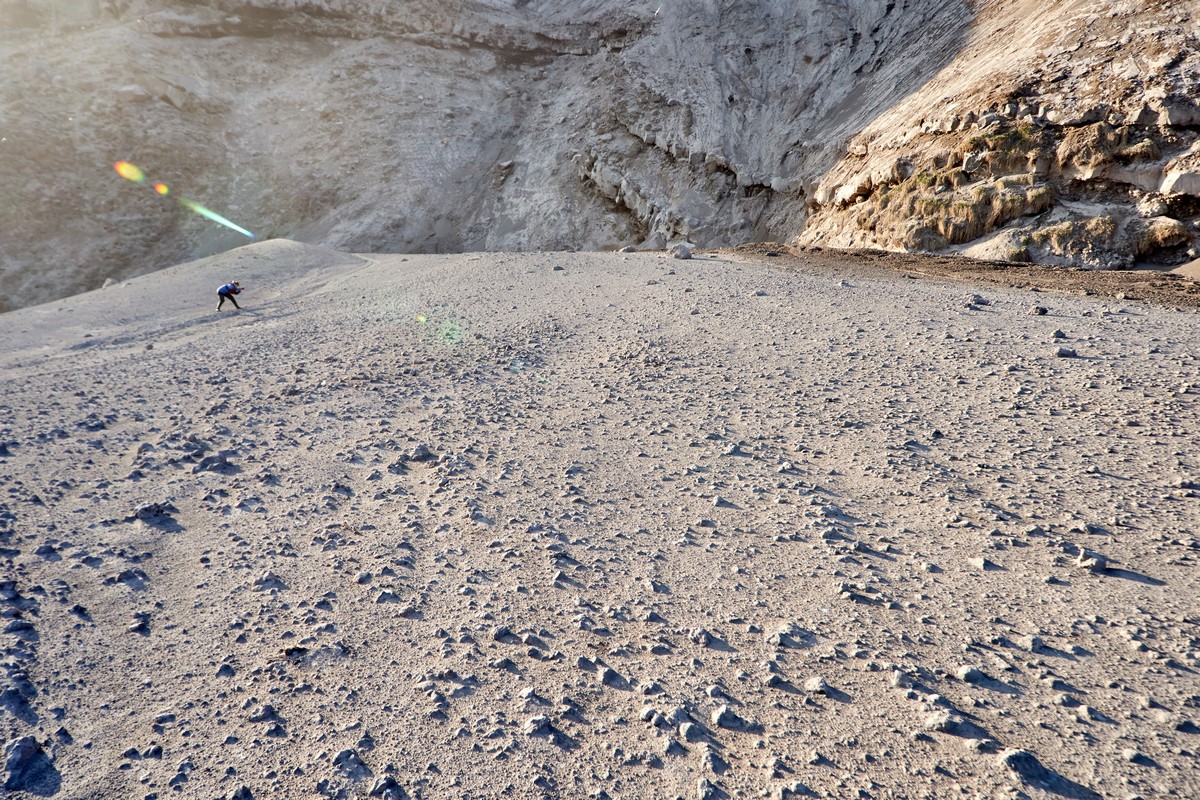 And there’s Matua again; rather – its volcano: Sarychev Peak -> 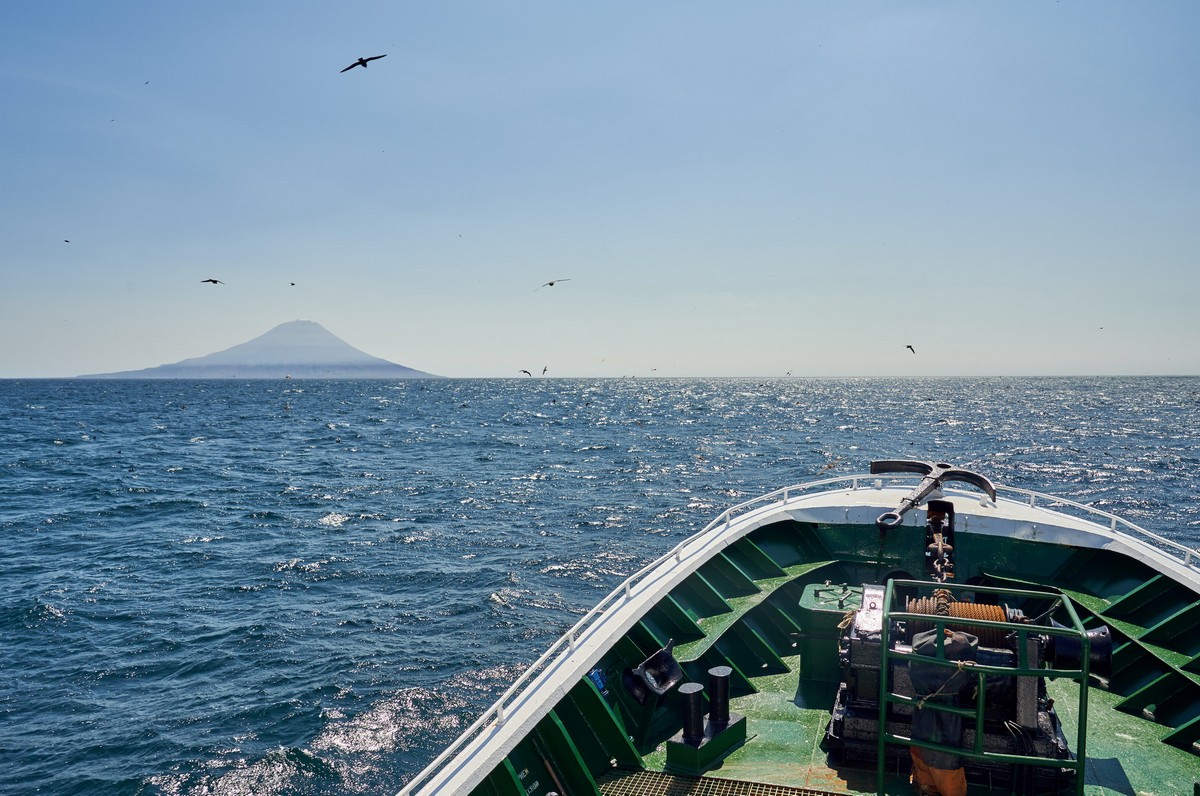 What’s that white on the top? 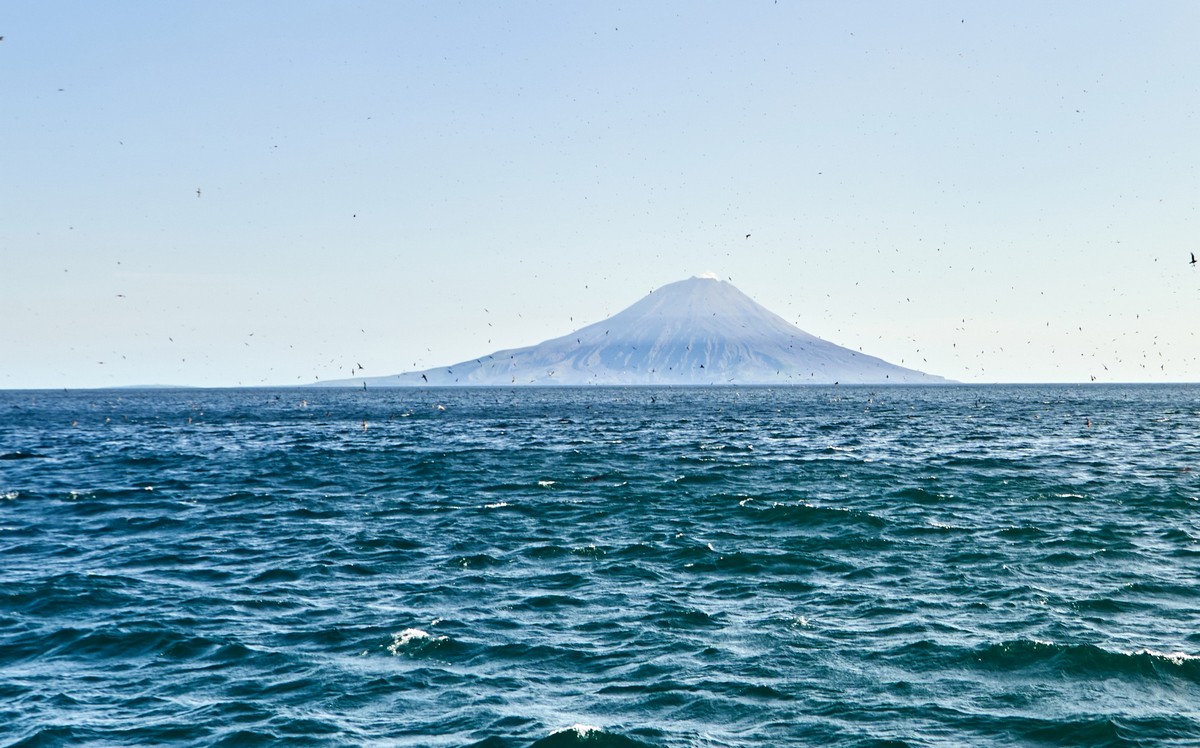 A volcanic burp! Charming! Just a little one though – he’s still in training… 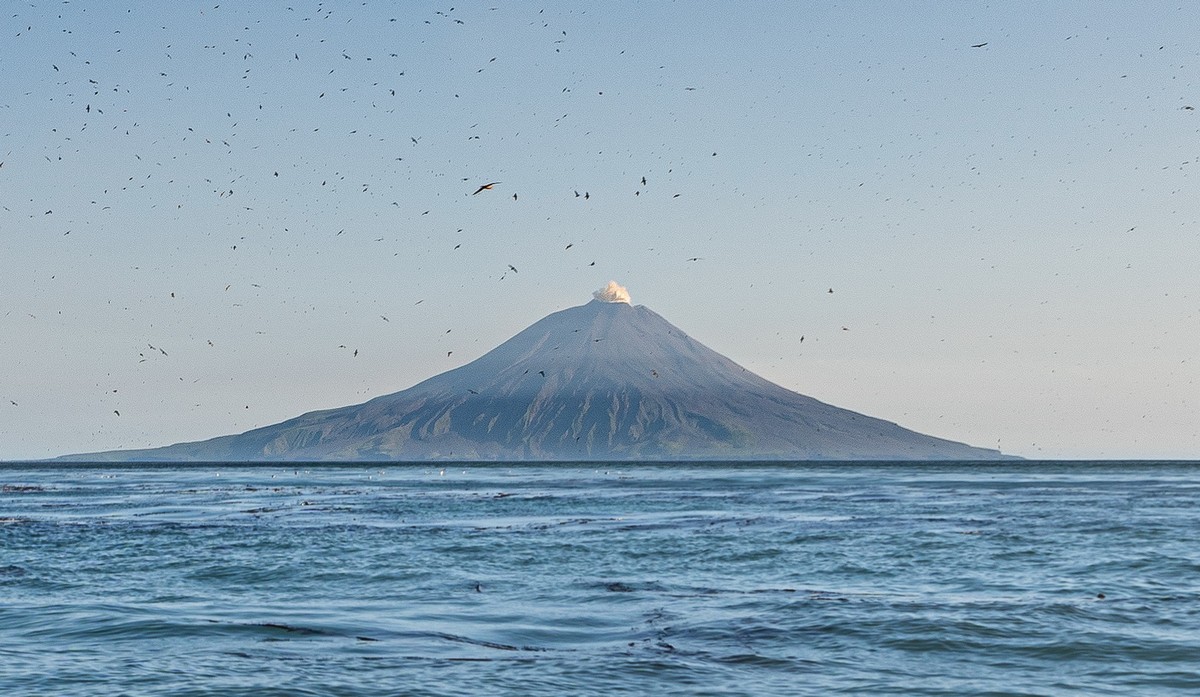 Ten years earlier there was more than mini-burps: it blew its top good and proper: 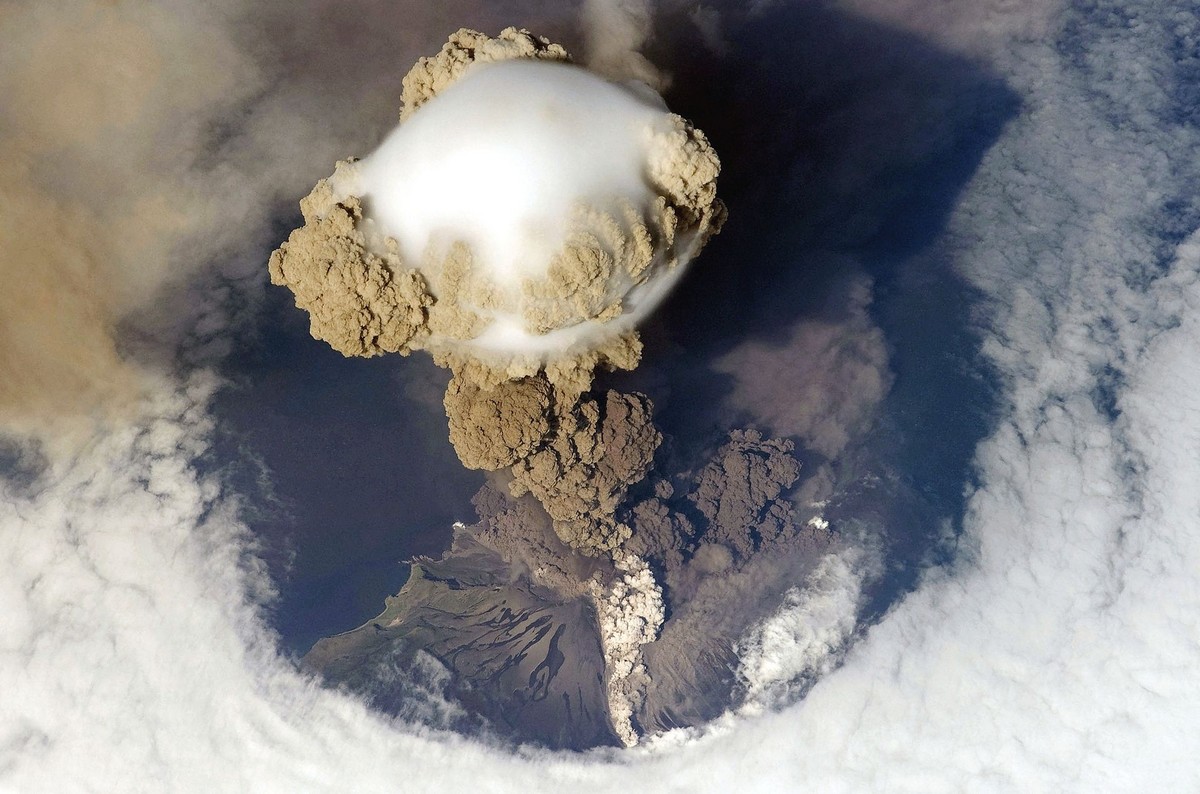 The next islands in the Kuril chain are Matua and Rasshua. We landed on both in 2014 in bad weather. Not too much to report from either, so this year we decided to bypass them and head straight to the next island – the unbelievably beautiful Ushishir. The report thereon – up next…

All the pics from the Kuril-2019 expedition are here.