You didn’t think there’d be just one post on Ushishir, did you! )…

Of course not! Why limit probably the best volcano in the world to just one? No reason at all; accordingly, here we go – deeper. Literally! Into a cave here! For example – the one ringed red, here:

From afar – nothing special -> 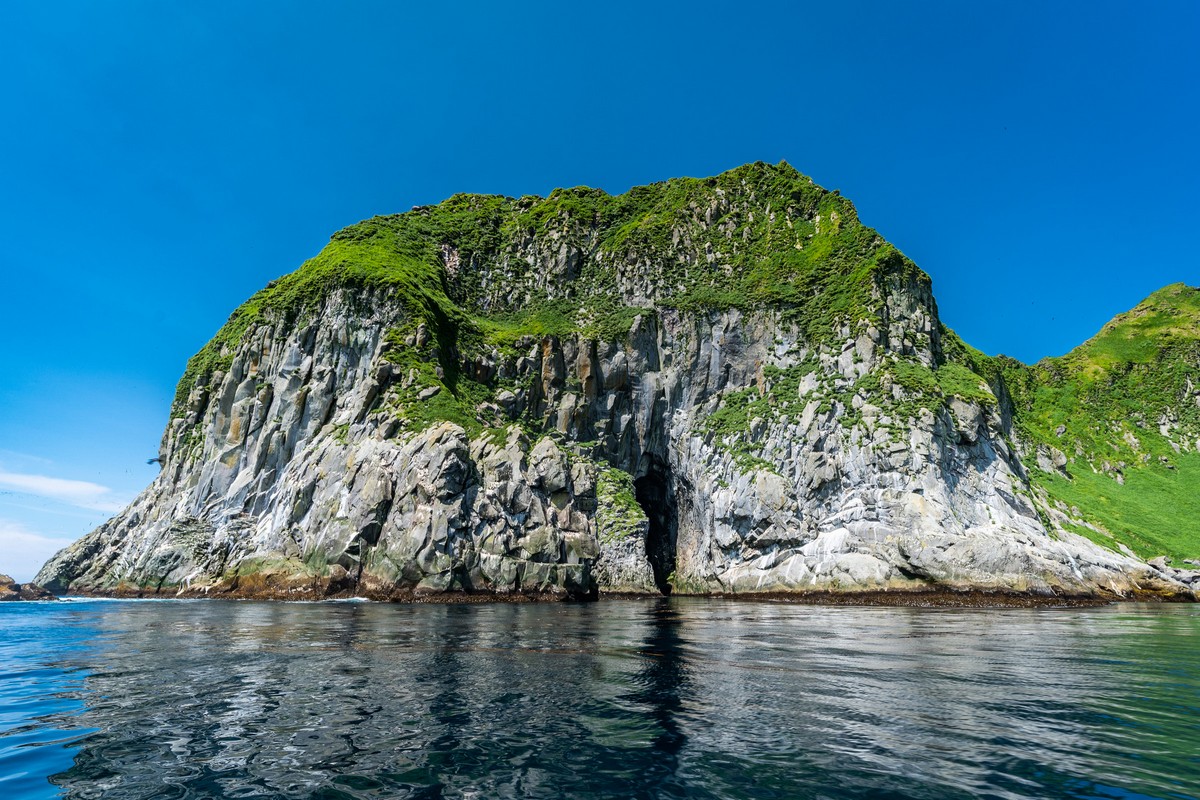 But then you get nearer… 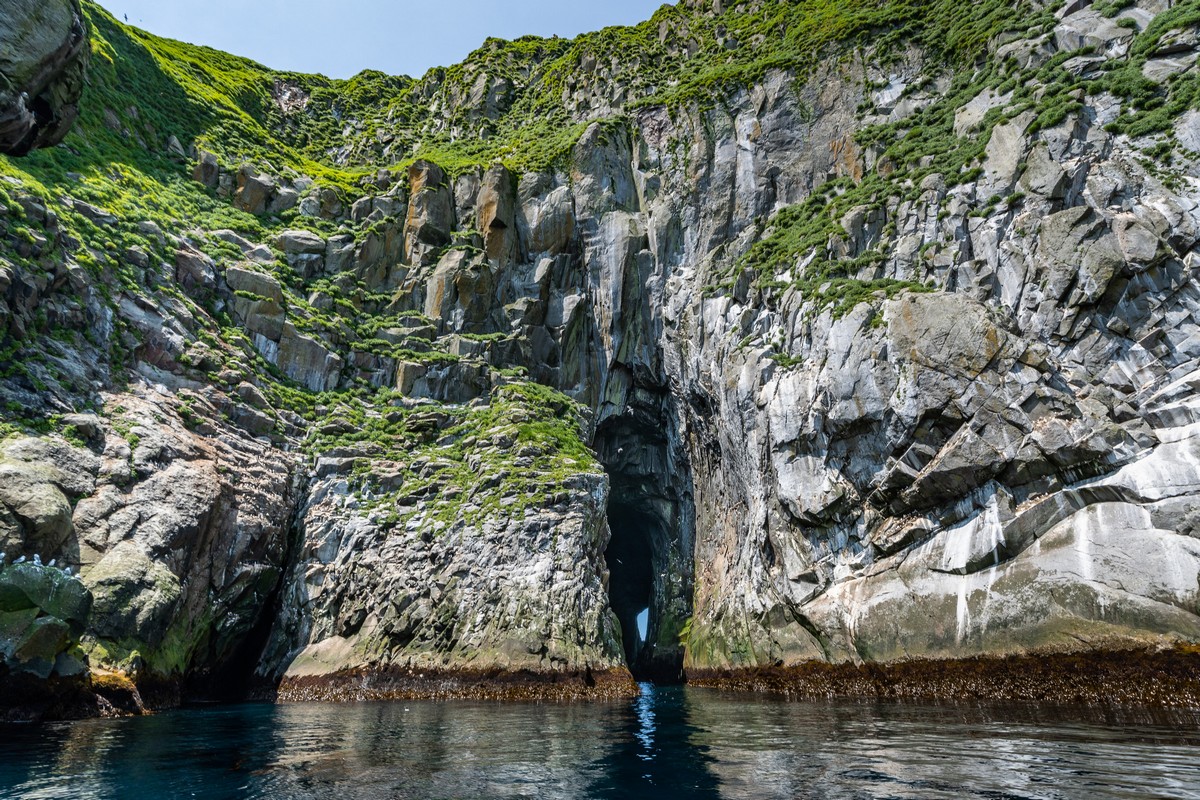 Woah – hole! No – two holes: like eyes peering out. The devil’s eyes!

Birds everywhere – even inside this cave: 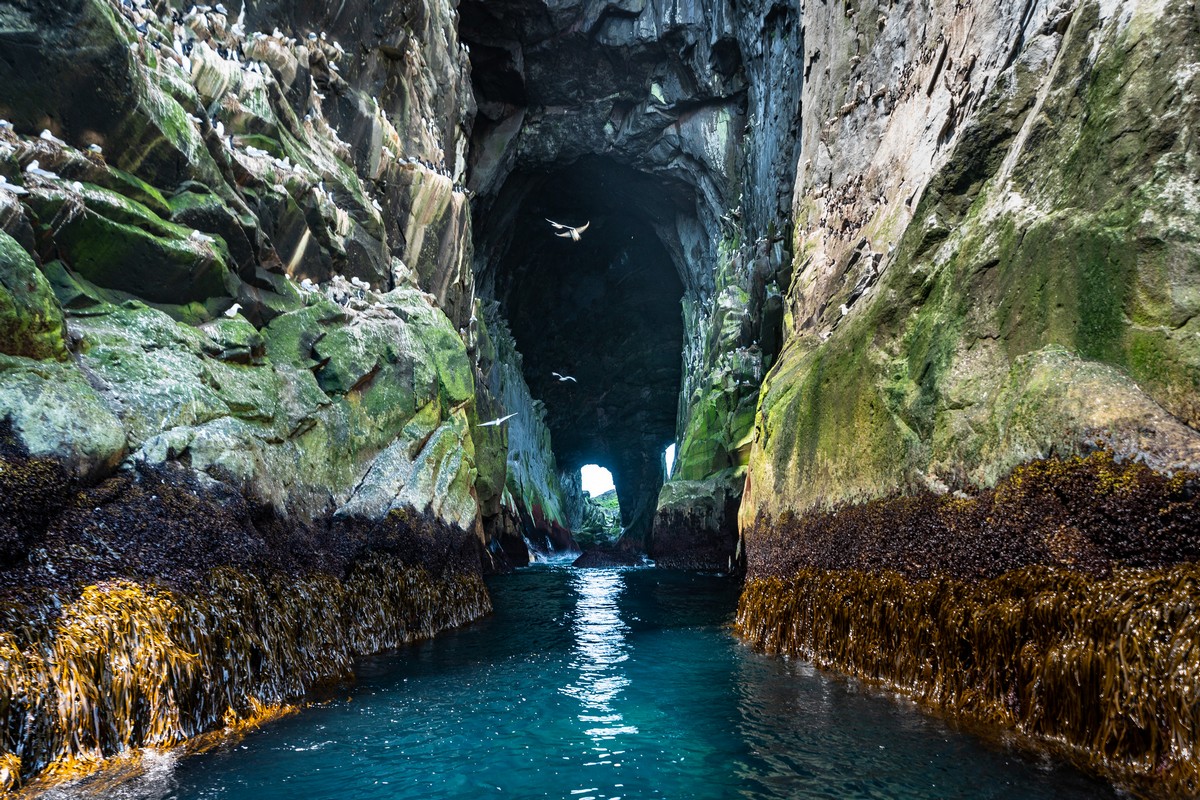 The seaweed stuck to the cliffs shows how high the morning full-tide gets.

We enter the cave. Looking back… “oh: nice!” – Petrovich.

And here are the two devil-eyes – ouch – from inside the ‘skull’!

But wait – it gets better! Come the evening – perhaps the only clear evening of the year! – we saw the sun set: through those eyes. Oh my. Awesome and creepy at the same time ). 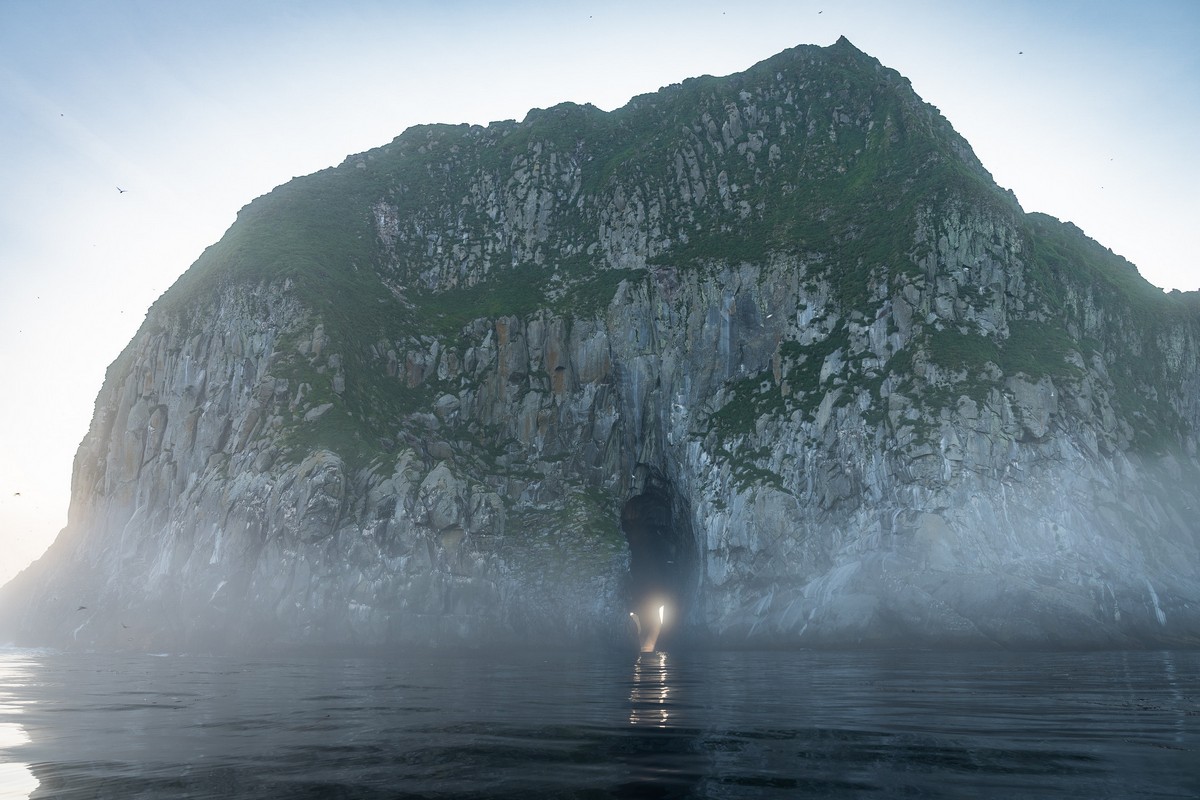 Oh my genuine! No, they really do shine like that!

And the lower the sun – the brighter the eyes shimmer and shine! 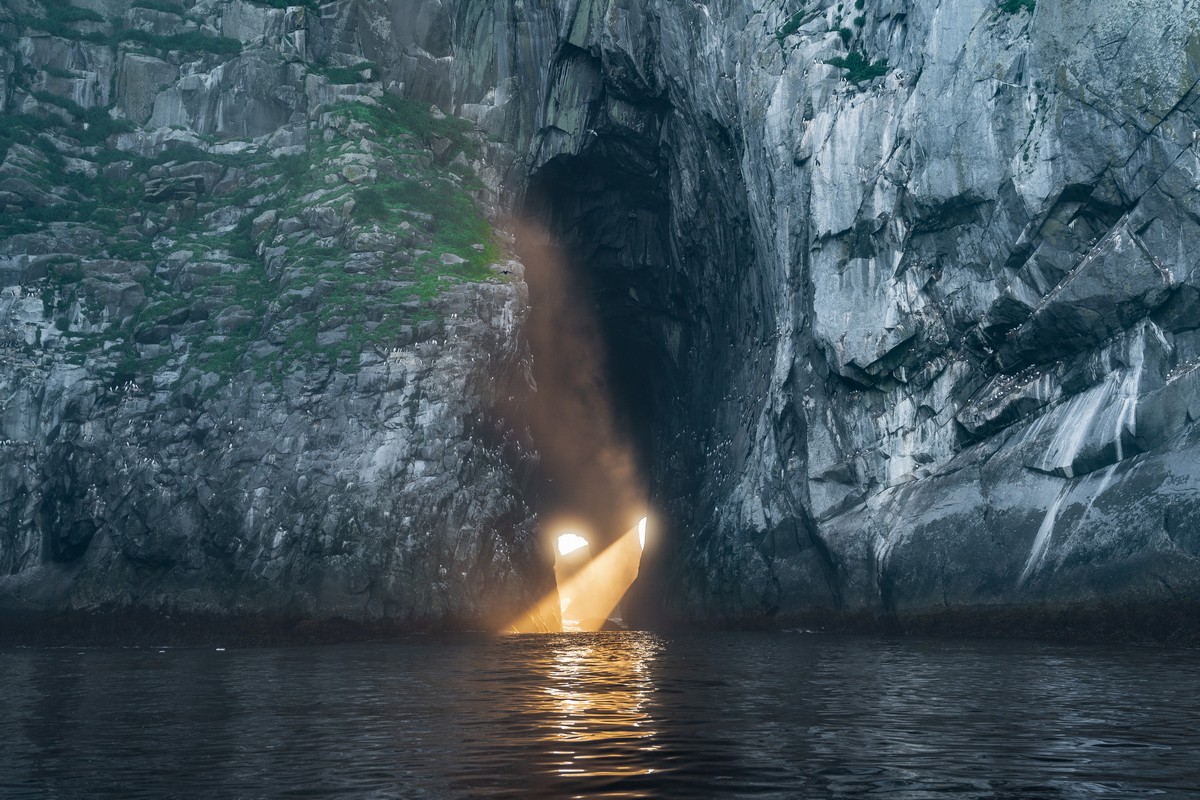 Now, I know photos of the same thing are all fairly similar – but I found it real hard deleting any of the dozens I took of these fiery eyes. Actually, there are a few key differences. Check these out!

Birds flying out of the devil’s eyes. This was getting spooky… 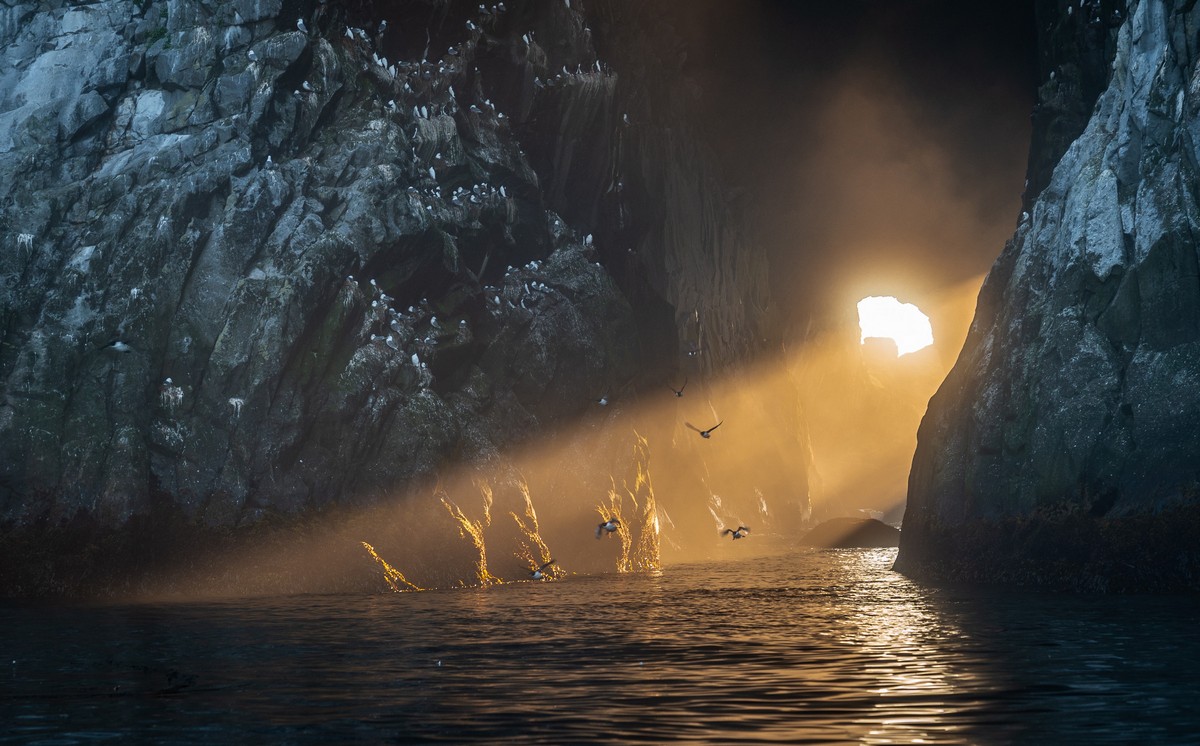 Next up – Skala Kolpak – Cap Rock. And the zillion birds flying around it, of course ). 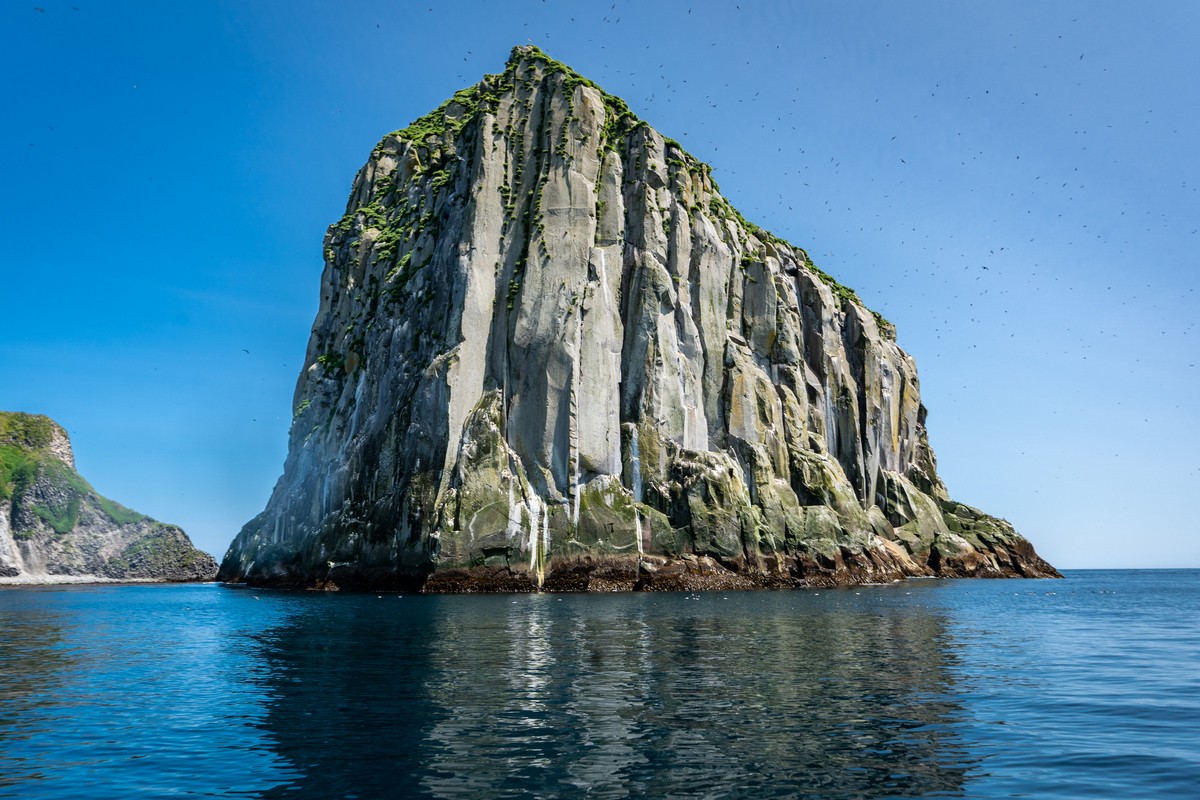 Some of our American guests fancied climbing the rock. After all, they did have their climbing kit with them. However, after getting close to it they realized it was a no-go. The whole rock is covered with seagull nests, so any climb would damage some of them. Also, pardon my French, but there’s also the not unimportant matter of merde. Beaucoup de merde. Indeed, it’s how the seagulls protect their home: they crap all over it, then also crap directly onto any invaders – dive-bomber style! Ugh. 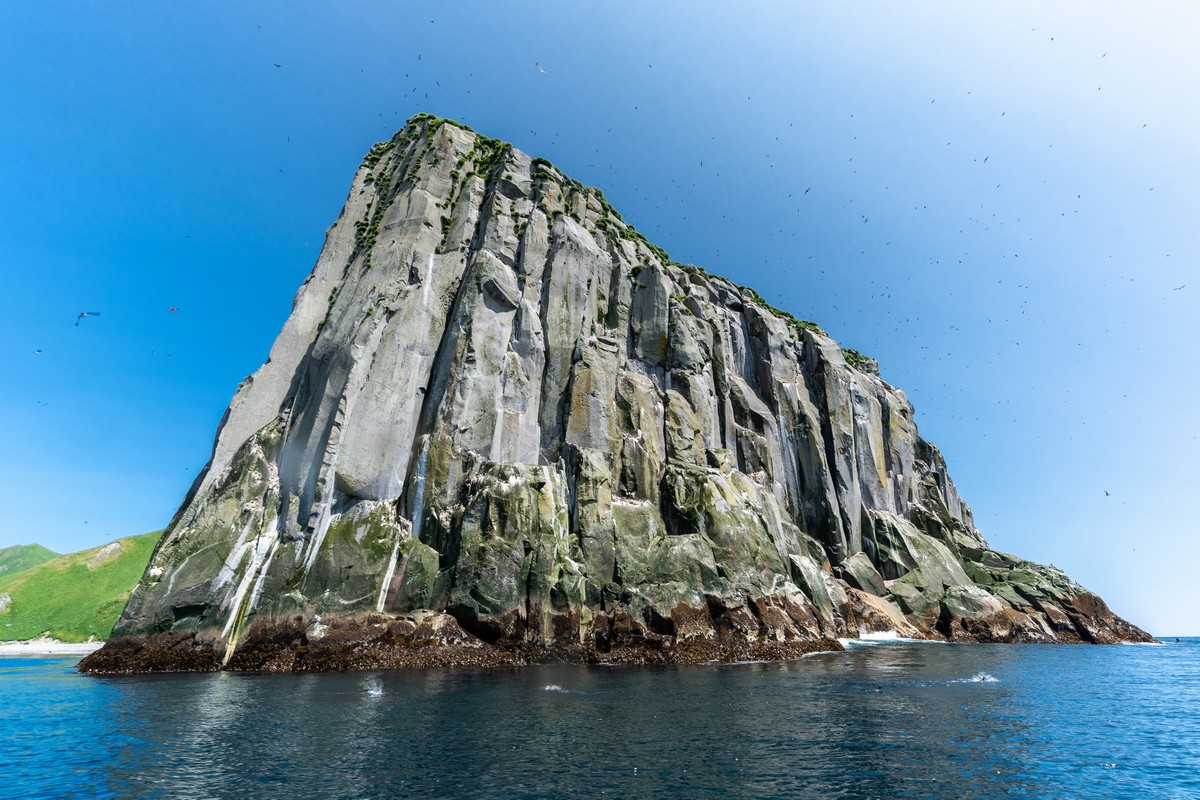 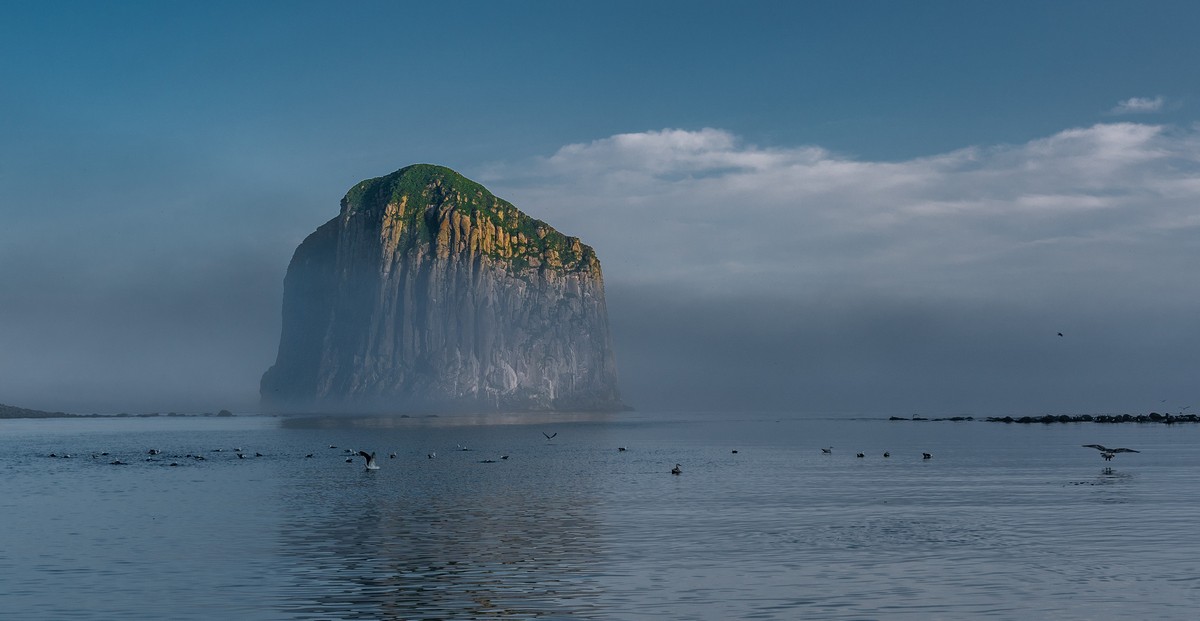 Check out the moon above it! 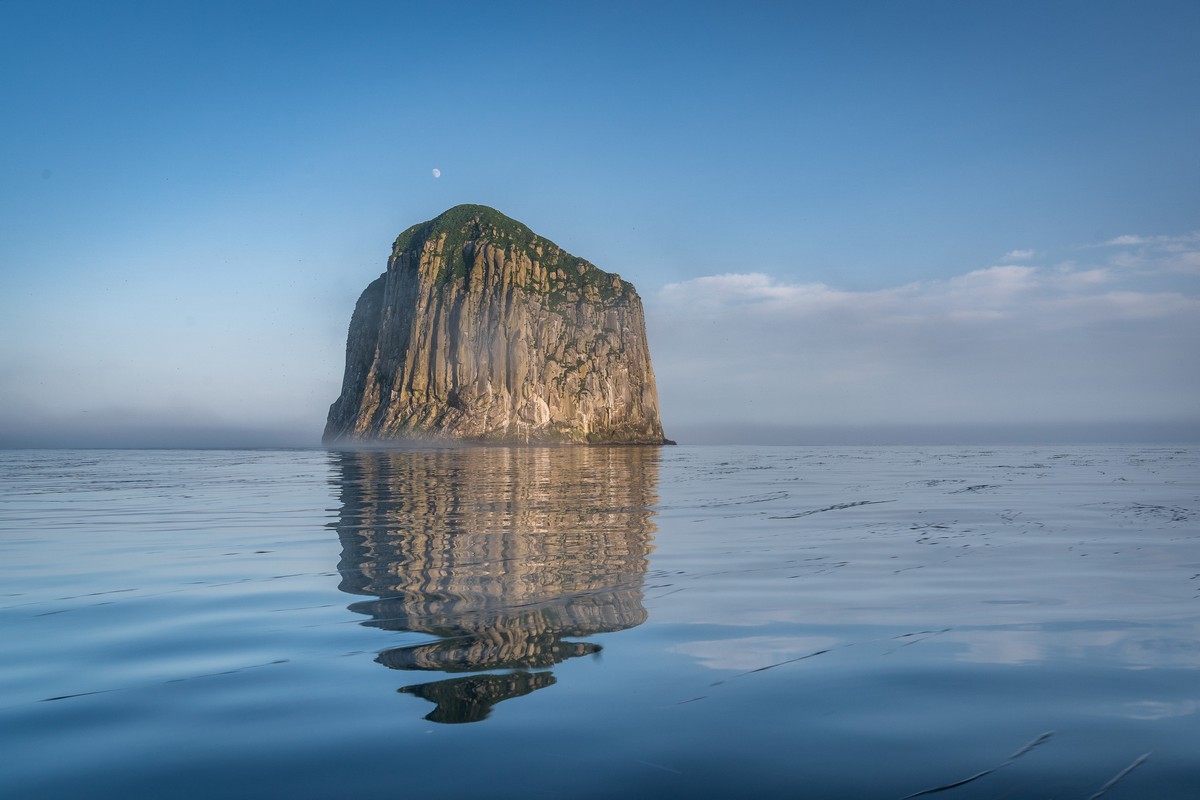 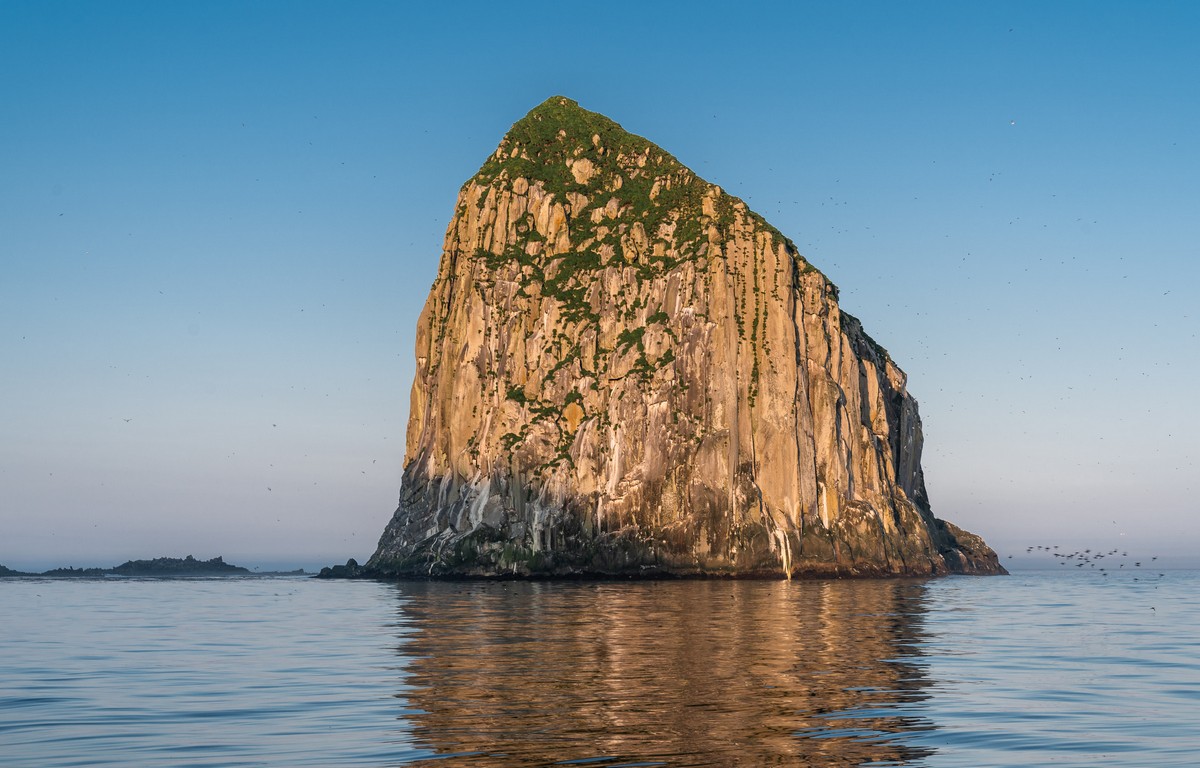 But back to the birds theme…

Those aren’t black clouds in the sky; they’re flocks of different birds! 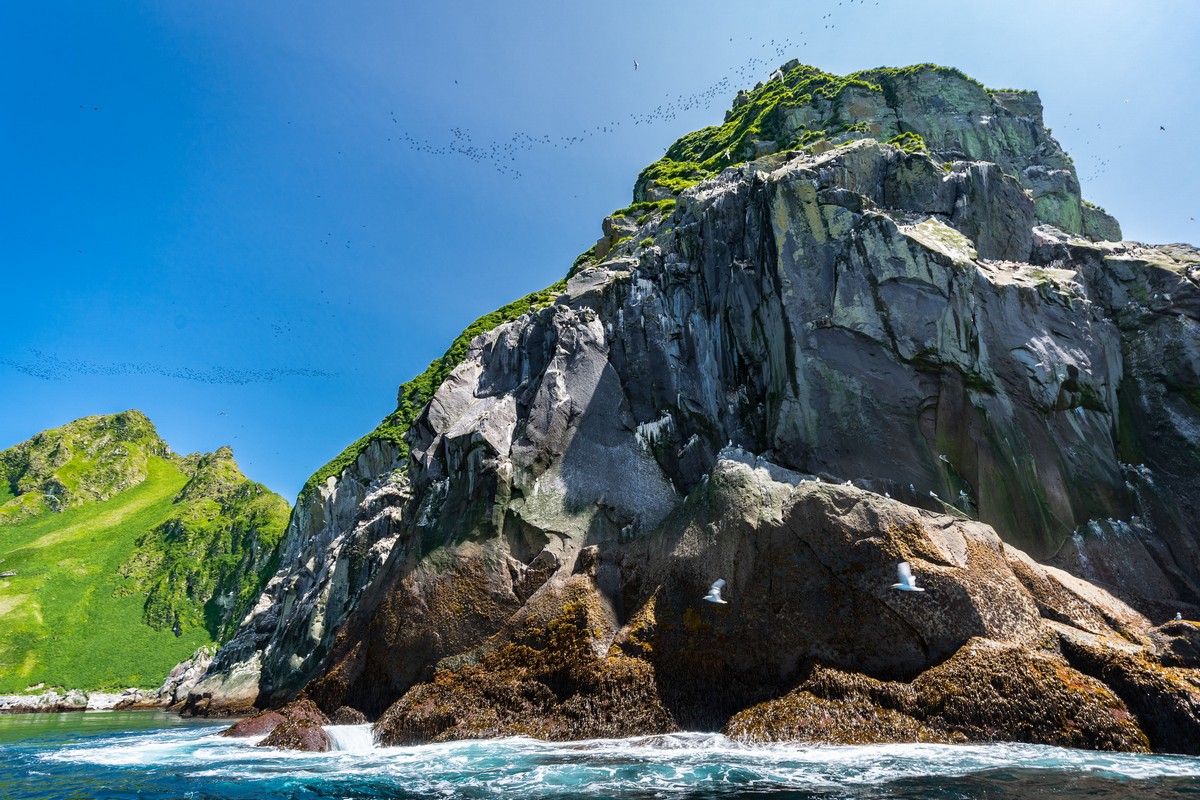 So what kind of birds are these? Well, I’m no ornithologist, but I do recall being told by an amateur birdwatcher that they’re different kinds of seagull, like fulmars, ‘flying penguins’ (Uria), red-nosed puffins, and aethia.

In the evening the birds appear to do a spot of exercise – darting about all over the place as if getting in shape before their fall migration.

Ushishir also has Arctic foxes among its wildlife. Not that they’re native: the Japanese brought them to the island (for their fur) – from the Commander Islands in 1915-16; 15 pairs of blue Arctic foxes were imported and left to ‘do their thing’. Which they obligingly did. Thus they multiplied, with some of the new generation being resettled on Sumishir and two islands of the Lesser Kuril Chain – Yuri and Lisi. By 1924 their number had grown to 2200! Fur farms were installed too – including on Ushishir.

And we saw some Arctic foxes – up close: real close! Now, I’m no expert, but here’s my theory as to why they’re so fearless: demand for their fur declined, so they thrived, living on the plentiful supply of local birds and fish, and they were hardly troubled by Homo sapiens – and that’s how they came to be so friendly: they simply don’t know anything about the murderous tendencies of man!

They look so sweet and all – but you have to watch it: they can be off with some of your clothing left around, or – worse:… guess?!

On one of the beaches we found… 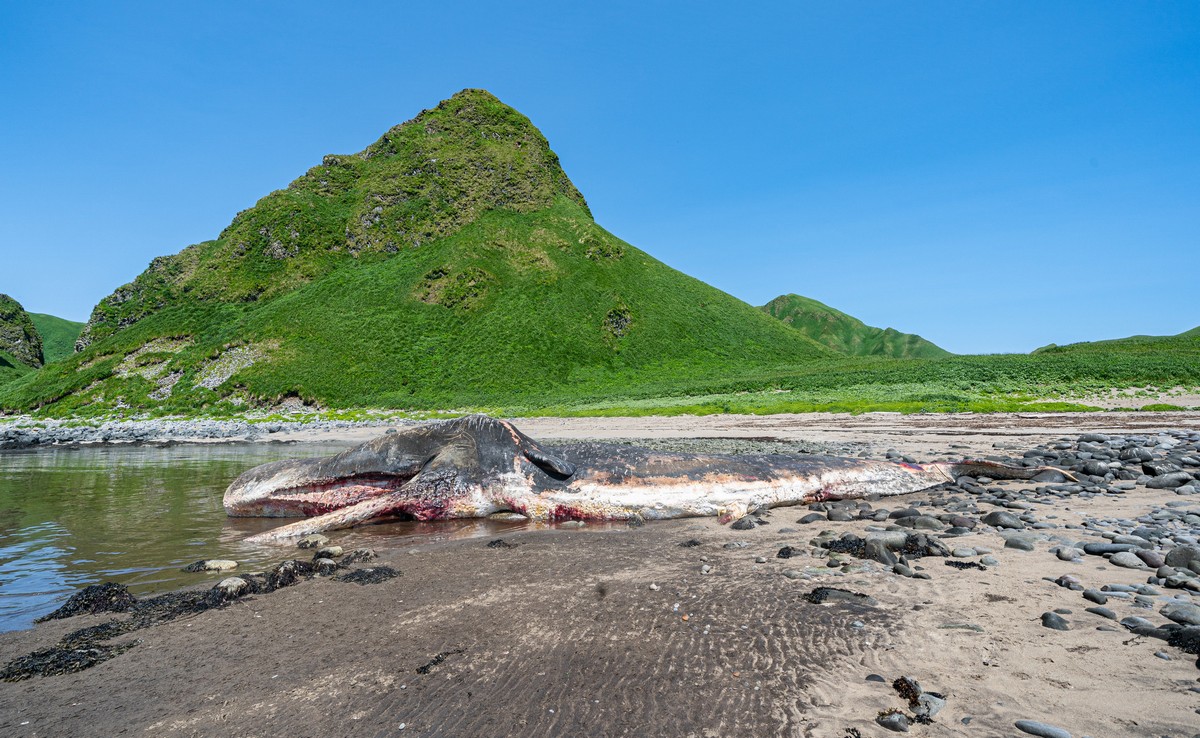 Massive it was too – 20 meters long, making it, according to the zoologists among us – 24 years old: an old-age pensioner! His teeth were also quite worn down – and badly decaying. Clearly he hadn’t been to the dentists as often as he should have.

We pass by the macabre artifact – and get back to more of the OMG views of the island:

But we had to be quick: the curtains were being drawn for the night:

That cloud/mist/fog – whatever it is – was beginning to get me down. But then I remembered – cloud/mist/fog/whatever doesn’t cancel out… fumarole fun!…

Since it was hardly a tropical paradise – no palm trees, no white sandy beach, no sun, no cocktails, no spa treatments – we decided… to make our own!

We even added hot bar snacks – healthful ones too! Freshly caught seafood perfectly warmed and nicely mineralized! You place them in the makeshift mesh, into the hot spring-water they go, and minutes later – yum! 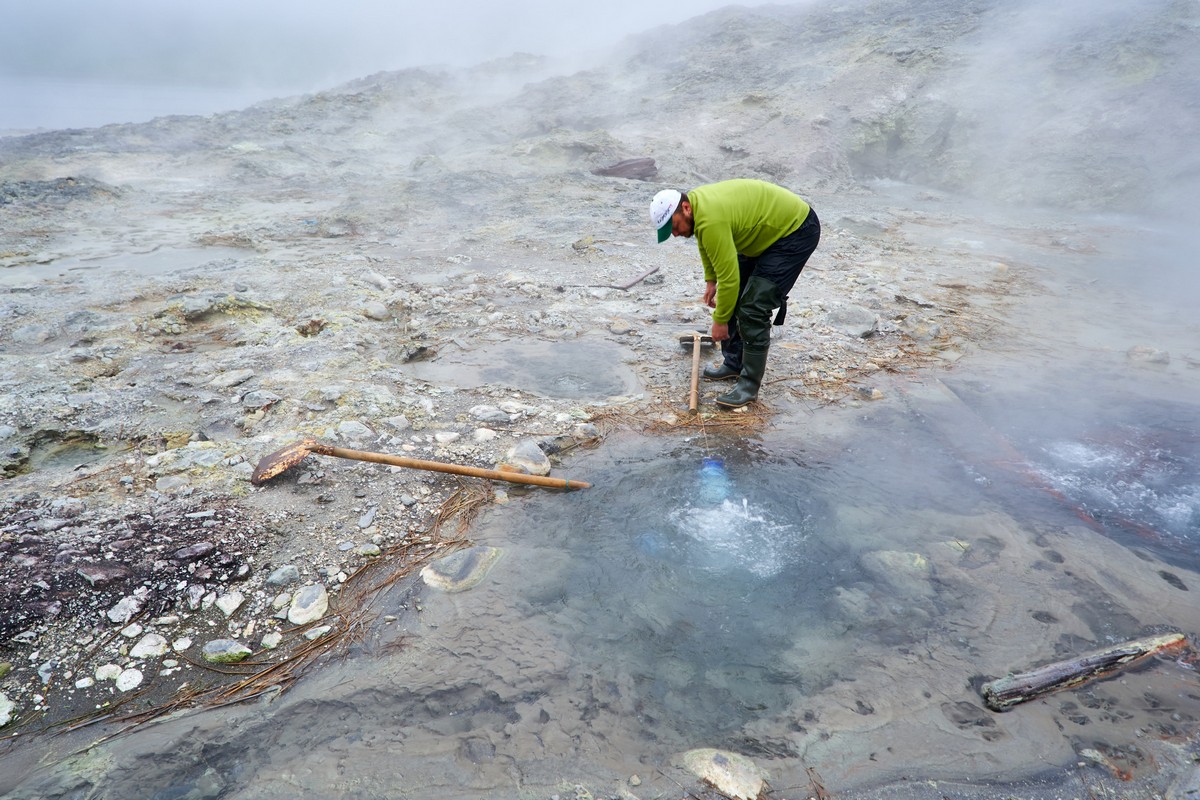 Meanwhile, the weather kept on worsening – stubbornly, Kuril style. Oh well. It’s not as if we hadn’t had a full day on Ushishir: sun, cave (some of us even swam right through), Hell’s eyes, decomposing sperm whale (from which we extracted teeth!), birds, spa, ‘cocktails’, barbecue, beer, caviar sandwiches, and walking upon the lush green ‘lawn’ that covers most of the island! 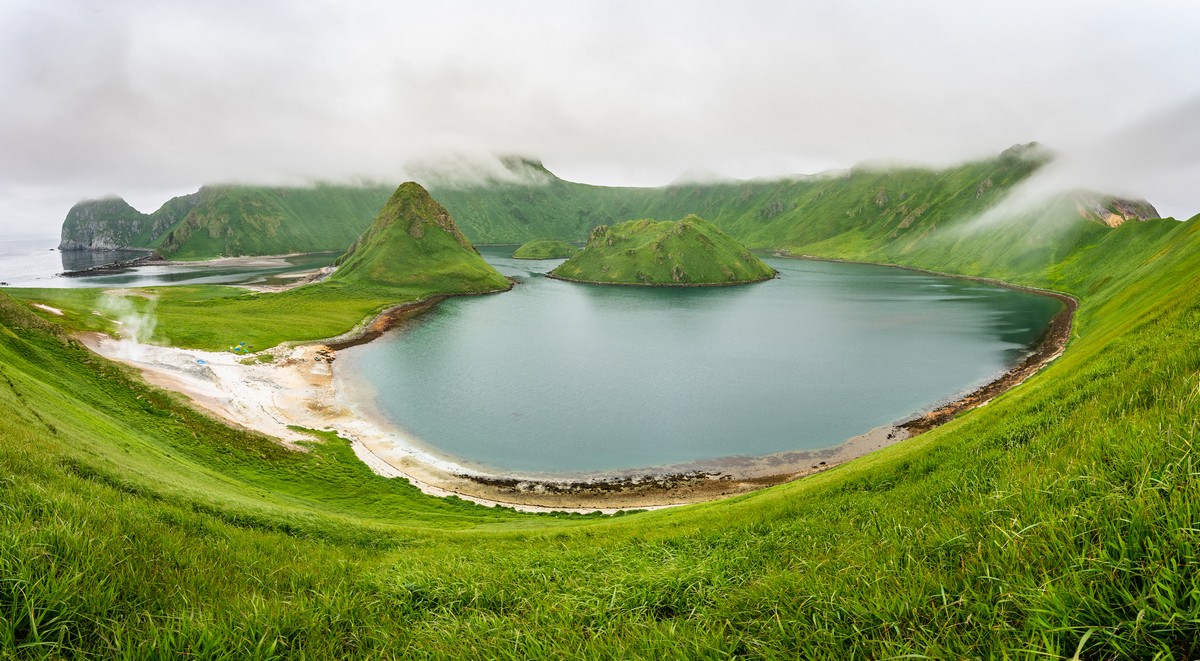 But it was time for us to head back to the Athens:

Farewell Ushishir! Hope to be seeing you again some time…

The next island for us was Ketoy. Looked great from Ushishir. The island is practically round – like Atlasov – but instead of a single, rather perfect cone up top there are volcanic ruins and interesting rock formations. There are also two lakes – as seen from a satellite (one turquoise; the other – not sure… possibly freshwater? We’ll have to find out)… 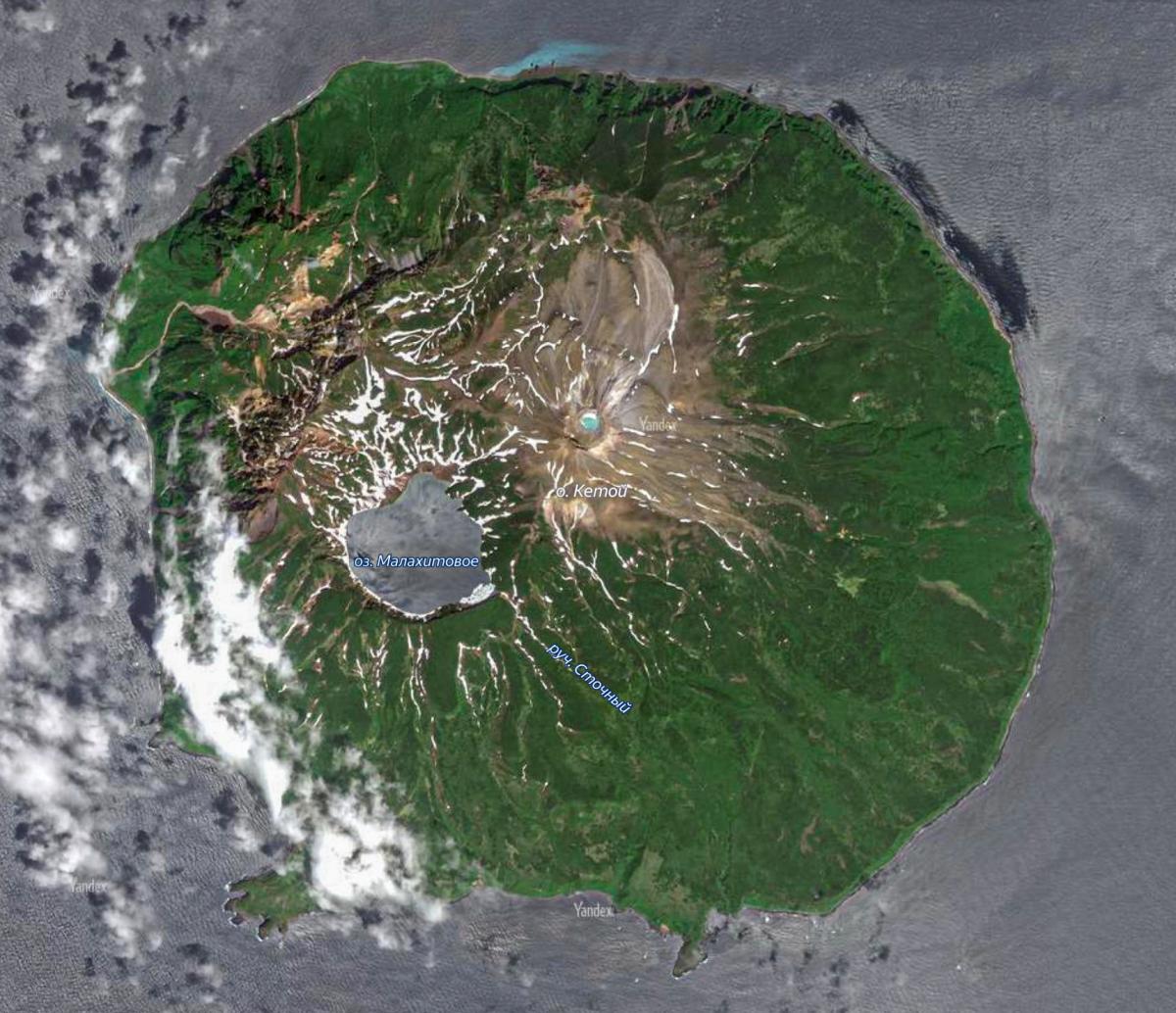 That’s all for today folks, but I’ll be back tomorrow with a post not from the Kurils (I’ll continue later on), but from… Lebanon!

All the pics from our Kuril-2019 adventure are here.