If the internet is to be believed, there are a total of 56 Kuril Islands, not including the many separately standing and/or grouped rock formations. In all I’ve walked upon 14 Kurils, which doesn’t sound much; however, I chose well – they’re among the most interesting.

As I mentioned earlier, we were going from the northernmost to the southernmost Kurils. The first, northernmost Kuril is Atlasov Island, which is basically a volcano-island, the volcano itself being called the Alaid (pronounced A-la-eed).

The Alaid is 2285 meters high, making the island not only the tallest of all the Kurils – but also of all Russian islands (didn’t know that; isn’t the internet just great?:). And since the depth of the Sea of Okhotsk around these parts is around 800 meters, the total height of the volcano from the bedrock under it is a full three kilometers. An impressively colossal construction!

But enough of statistics. The main thing about this volcano-island is how it looks. It’s just so smoothly spherical. So much so, our guides told us how many Japanese who visit say it’s even more beautiful than their sacred Mount Fuji!

I could write at length describing the stunning symmetry of Atlasov-Alaid, but, as I often say, why bother when I’ve lots of photos – plus a video (of the time-lapse variety, no less)?! Here you go ->

Having landed on the island, looking up, it was hard to believe this here ‘little hill’ is a full 2000 meters high! 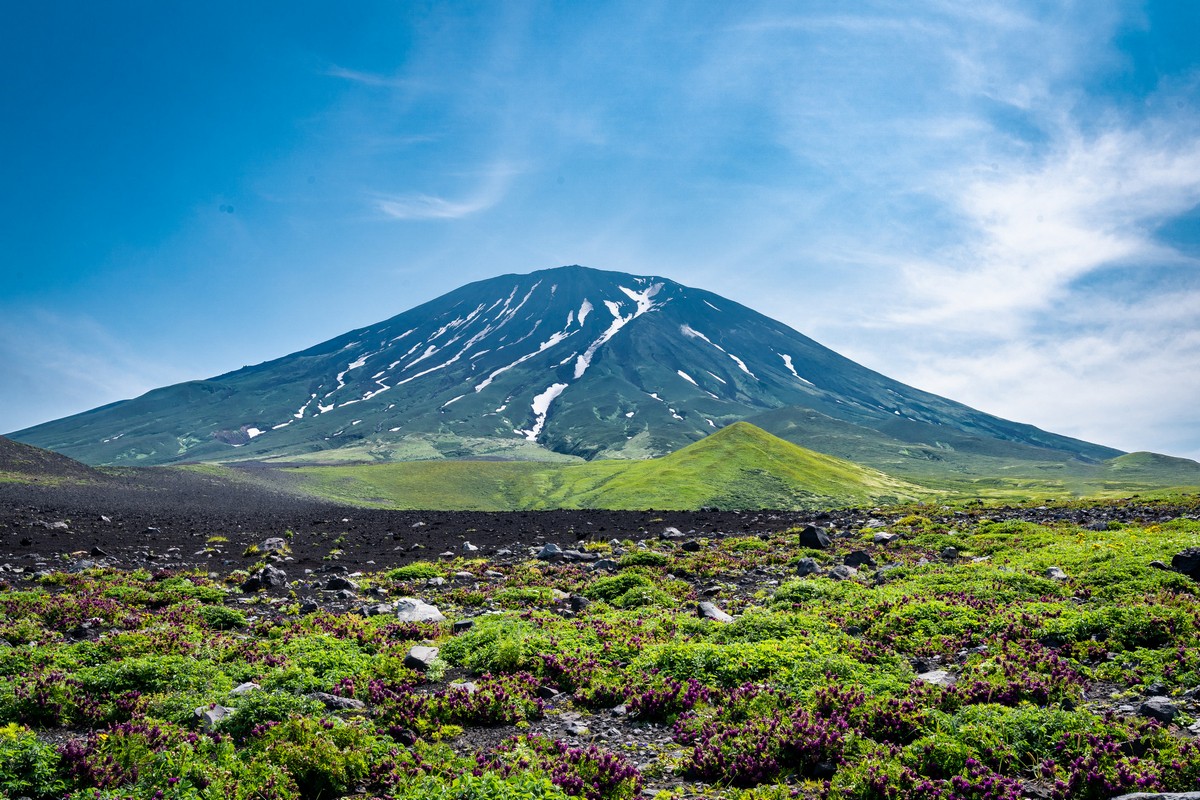 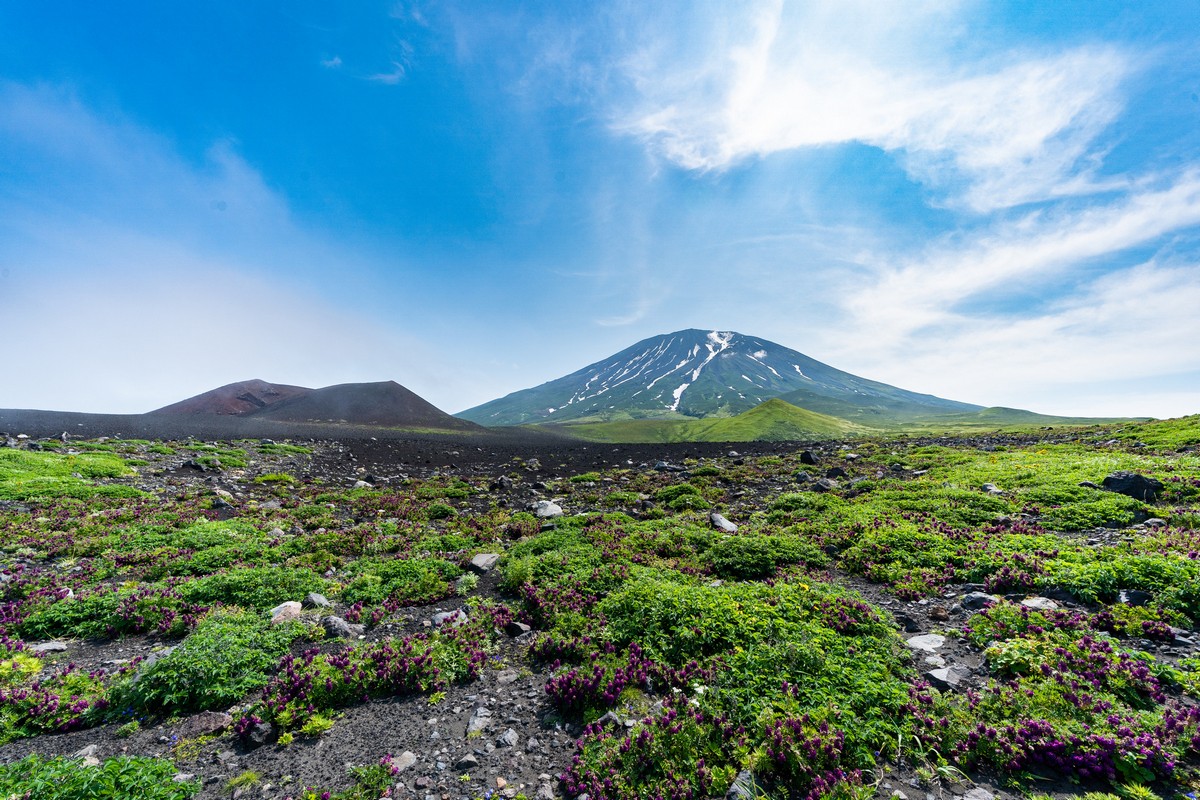 Two kilometers along the vertical – that’s a little too tough for a group like ours with just one day to spare, especially given that much of the way, apparently, necessitates ‘four-wheel drive’ up the steeper slopes near the top. No, we decided not to push ourselves. We weren’t here for punishing tests of stamina. So we settled for some volcanism that occurs a little lower than the main crater at the top of the volcano – two relatively fresh side-craters. These were formed when lesser streams of the main ‘fountain’ of lava rushing to the top of the volcano (still inside it) branch off to come to the surface lower down and to the side (any volcanists among you? Maybe you could correct me if I’m not the most precise?). There are several such mini-craters around Alaid, but just two are recommended for closer inspection. The first is called Taketomi, formed during the eruption in 1933-1934; the second is called the ‘Olympic Rupture’, named so as it was formed during the eruption in 1972 around the time of the Munich Olympics. 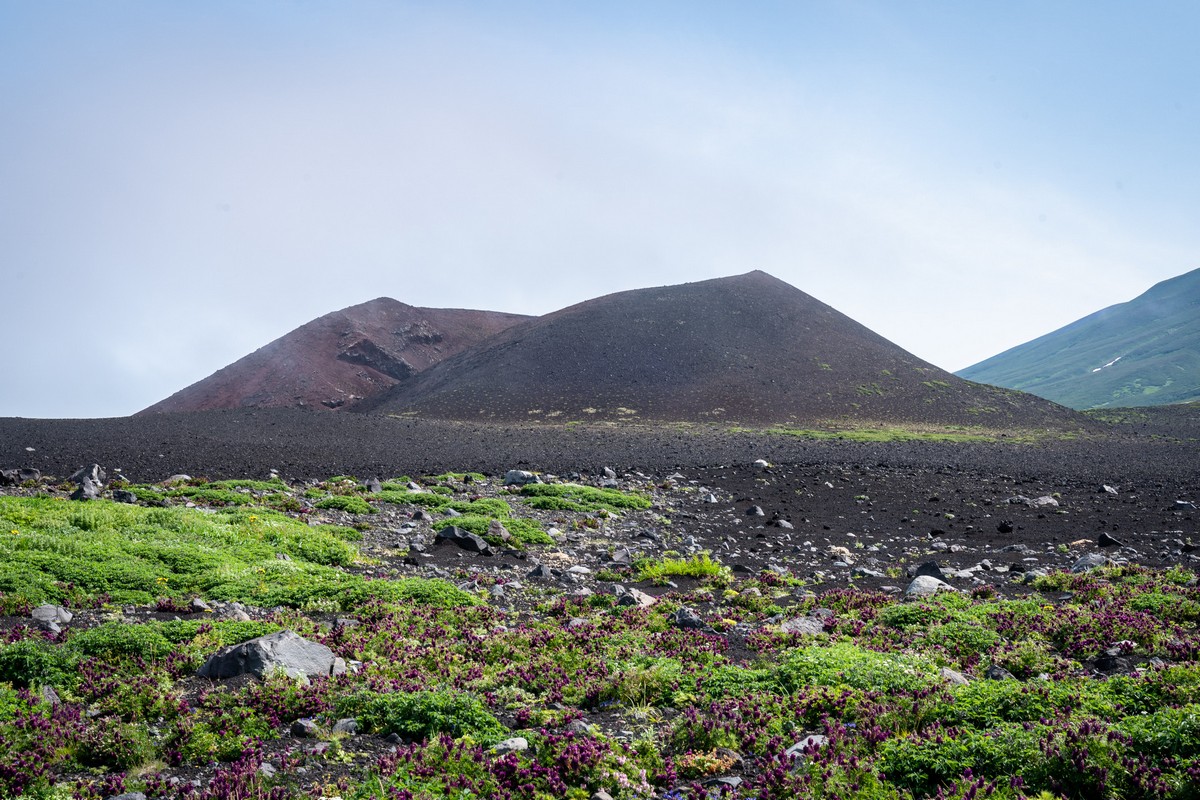 All righty. Up we trek…

The crater isn’t the world’s biggest but it’s still impressively substantial. In getting to it we sometimes had to get on all fours, but not for long: before we knew it we were up at the top. And the views there – our first proper Kuril-volcanic views of the expedition – were inevitably oh-my-grandiose!

I was reminded at this point just why I find volcanoes to be so much cooler than mere mountains: with mountains – the views therefrom can be impressive; but when it comes to volcanoes – you have the views therefrom plus the views inward – into the crater or caldera. Ah – but I’m repeating myself: check this out for a full 12 (!) reasons why volcanoes are better than mountains!

You can actually walk down it!

Or stroll along its banks ->

Btw – you can see how the lava stream flowed down a long dip that ran down the vertical of the slope of the volcano. All around it – smooth layers of volcanic dust, ash and rock; while the lava rushes down a ‘valley’. How? Why? Could it have been the lava made the stream – and valley – itself somehow? Any of you, dear readers, know – or can guess, at least? )

And at the bottom of the stream, where the lava met the sea, it quickly hardened, giving us these beautifully brutal gothic monuments ->

And the icing on the cake – drono-video!

Meanwhile back on the Athens…

So that was that evening’s dinner sorted ).

Ok, that’s it about Atlasov and Alaid. Time to head over to our next island…

All the photos from the Kuril-2019 expedition are here.