Herewith, a continuation of my narrative about the most beautiful volcano in the word, the king of all volcanisms on the planet (and in the Solar System, surely:) – his royal highness Krenitsyna Volcano! Here he is:

To get the best idea of the overall grandeur, splendor and superiority of this exceptional volcanism, one should check out Google Maps’ satellite pic thereof: 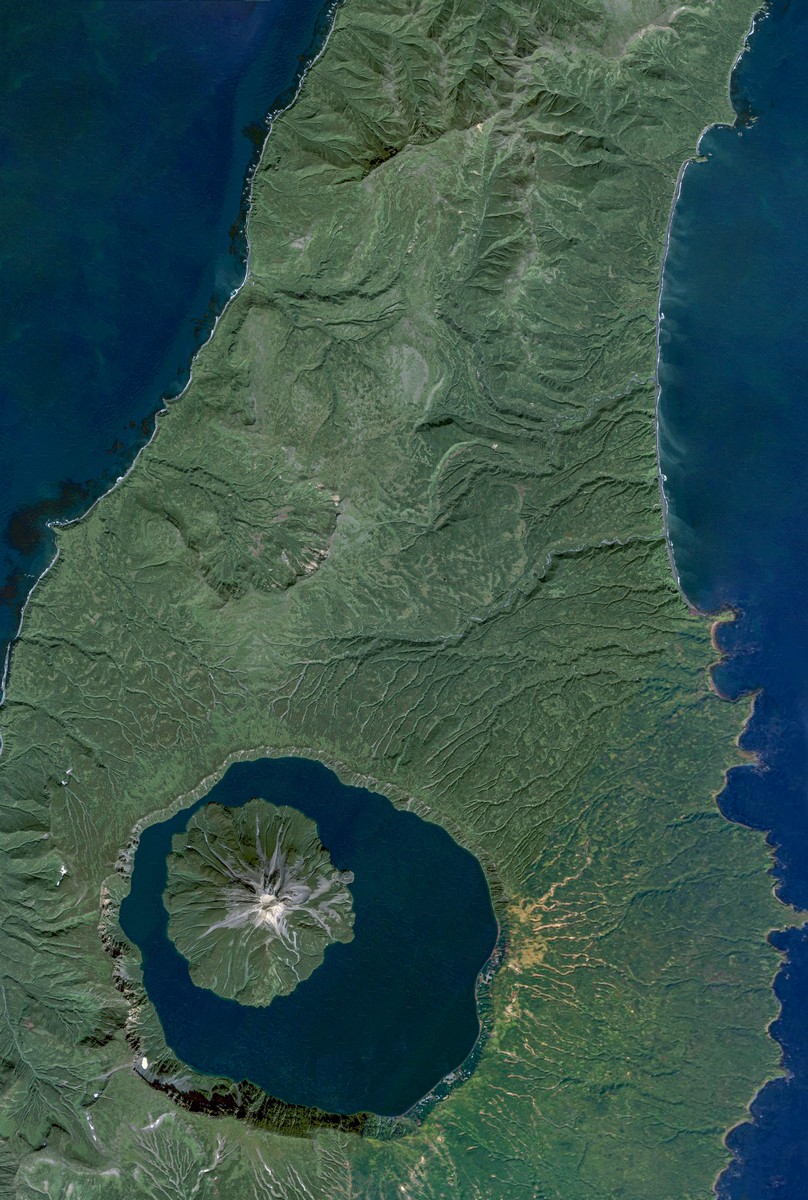 Now for a few more facts and figures about this volcano: 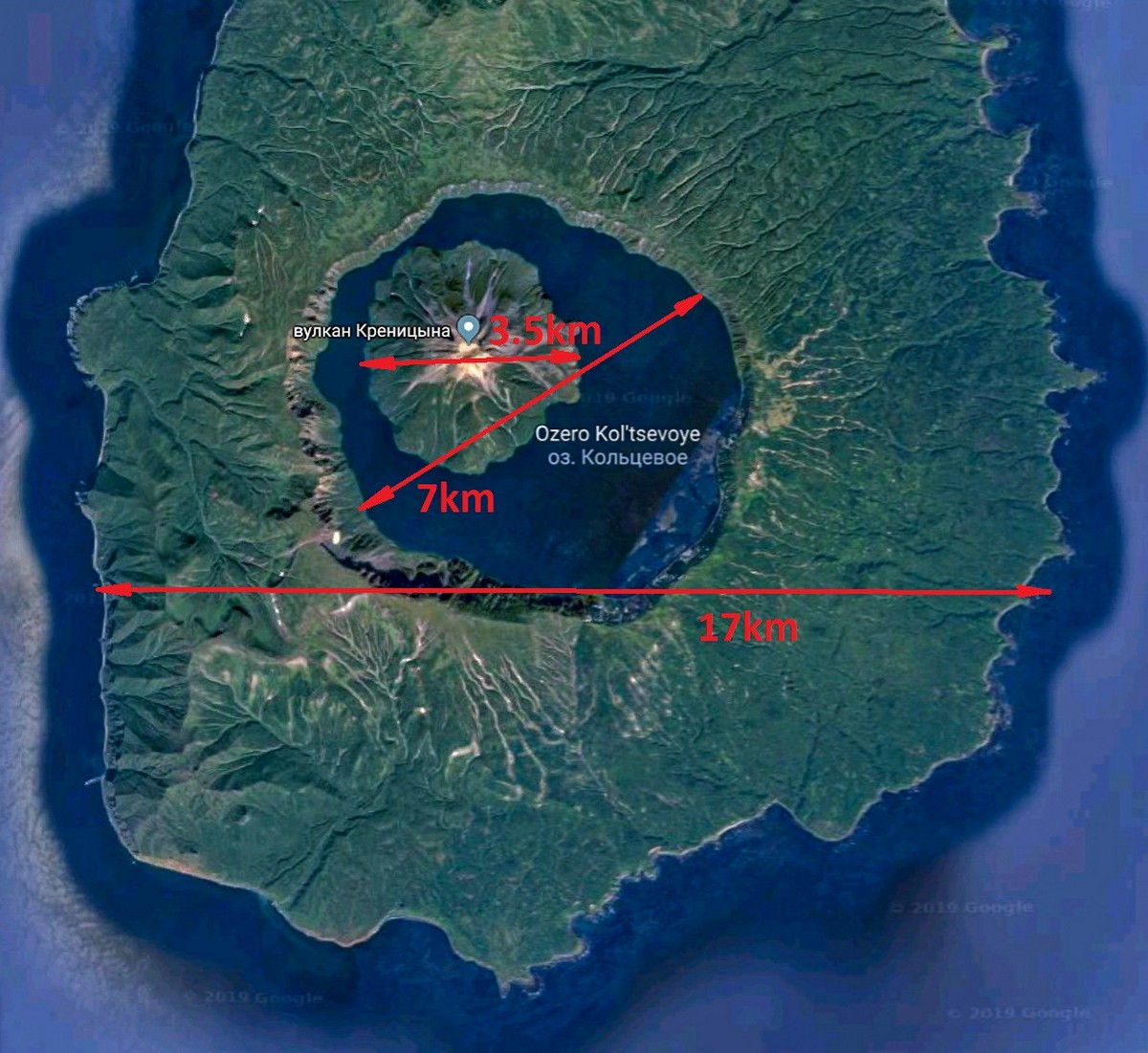 Now you’ve seen the stats, you also now know I wasn’t hyperboling when I was ‘bigging up’ this majestic and massive mammoth of a volcano ).

See for yourself: to the other bank of the lake here in the pic – 7km! And the height of the cone: nearly a kilometer! 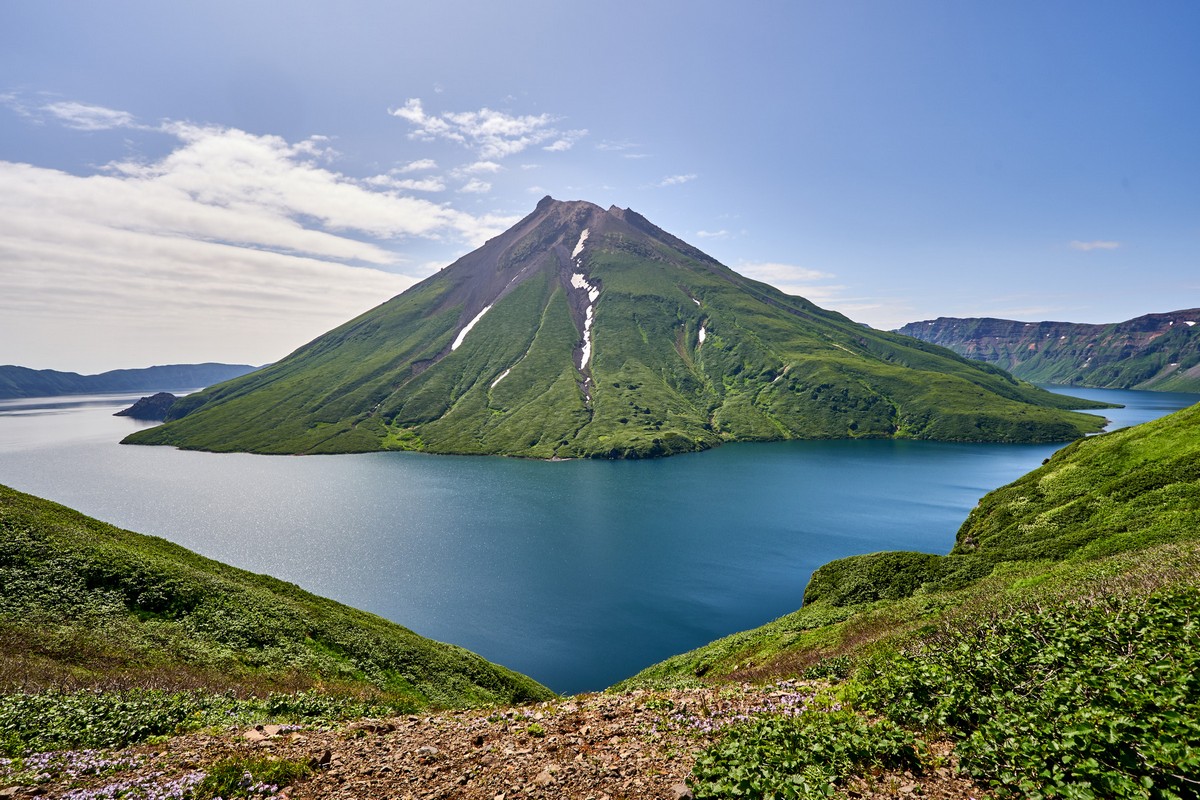 And from where this pic was taken to the base of the volcano it’s a full two kilometers, to the lake there’s a drop of 150 meters, and the depth of the lake here: 300+ meters! 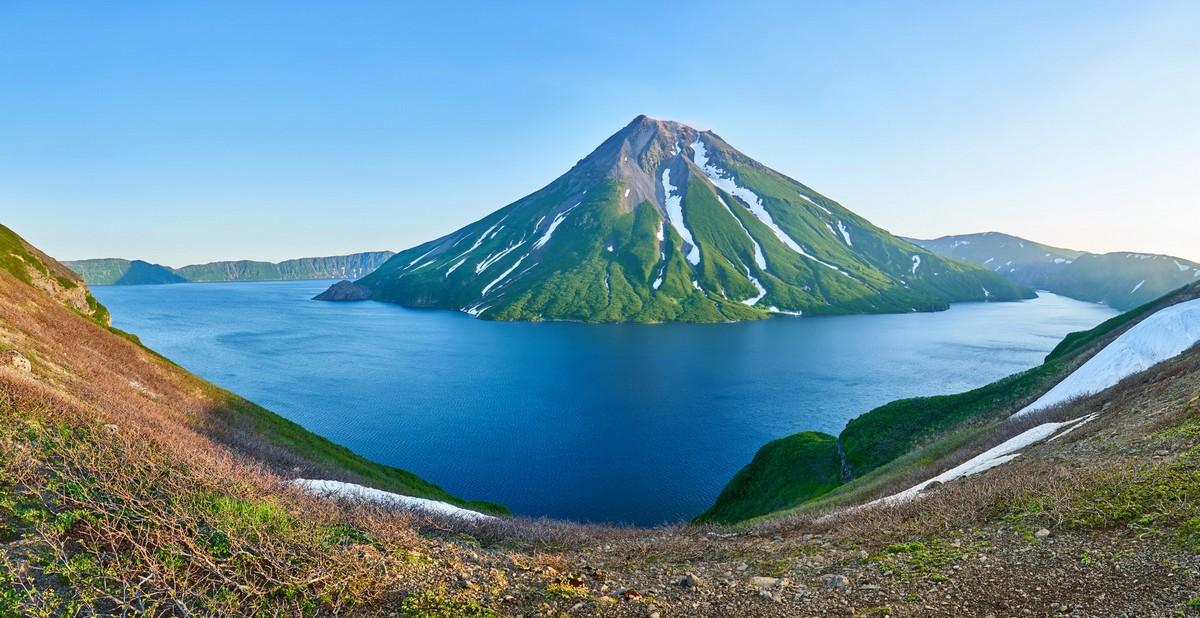 An awesome hydrotechnical installation; the designers truly nailed it this time ).

But now – rewind. It’s not far to get from Paramushir to Onekotan. We arrived early morning and there was thick fog everywhere: not good. However, modern technology came to our rescue! We launched a drone up over the island – equipped with GoPro – and it supplied us with the information we were hoping for: up above the cloud it was nice and sunny, and the world’s most awesome volcano is fully visible. Hurray! As if that news wasn’t good enough, we were also treated to the rare natural phenomenon known as a fog bow! 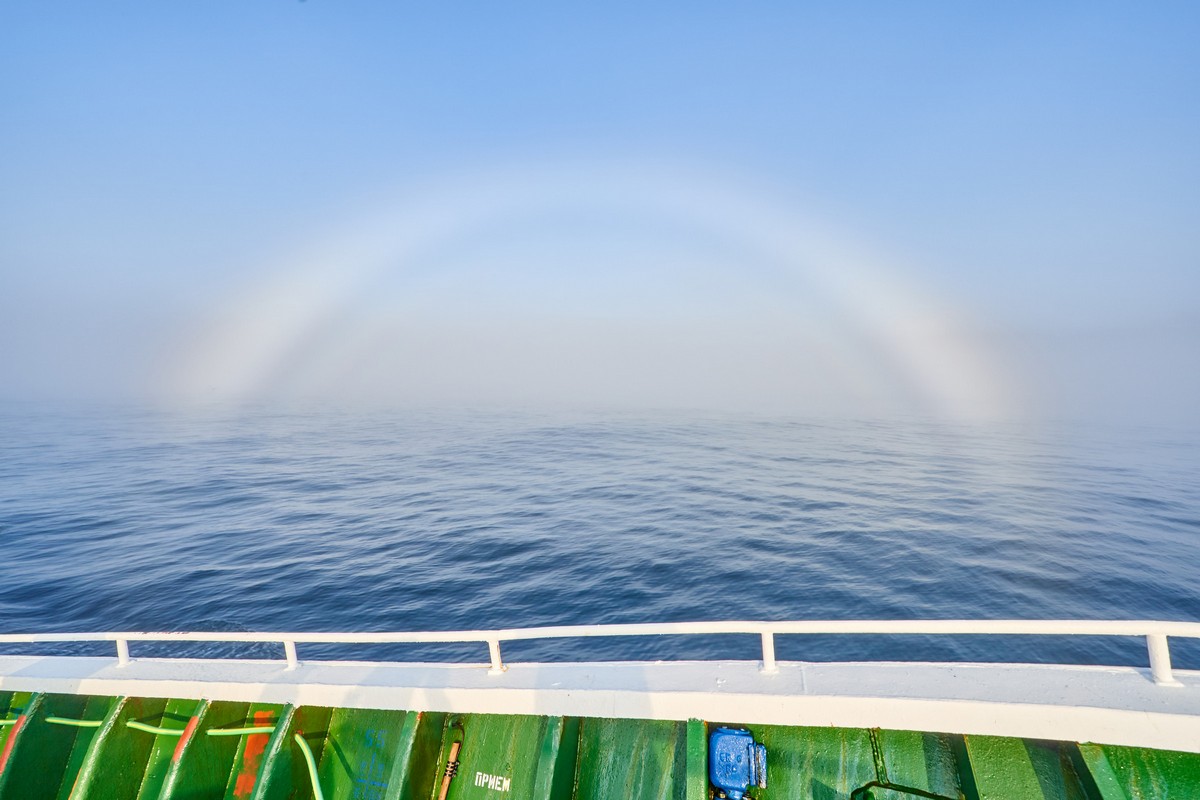 To be honest it was the first time I’ve seen such a thing. I’d seen halos in the sky plenty times, but never an all white rainbow! Woah! 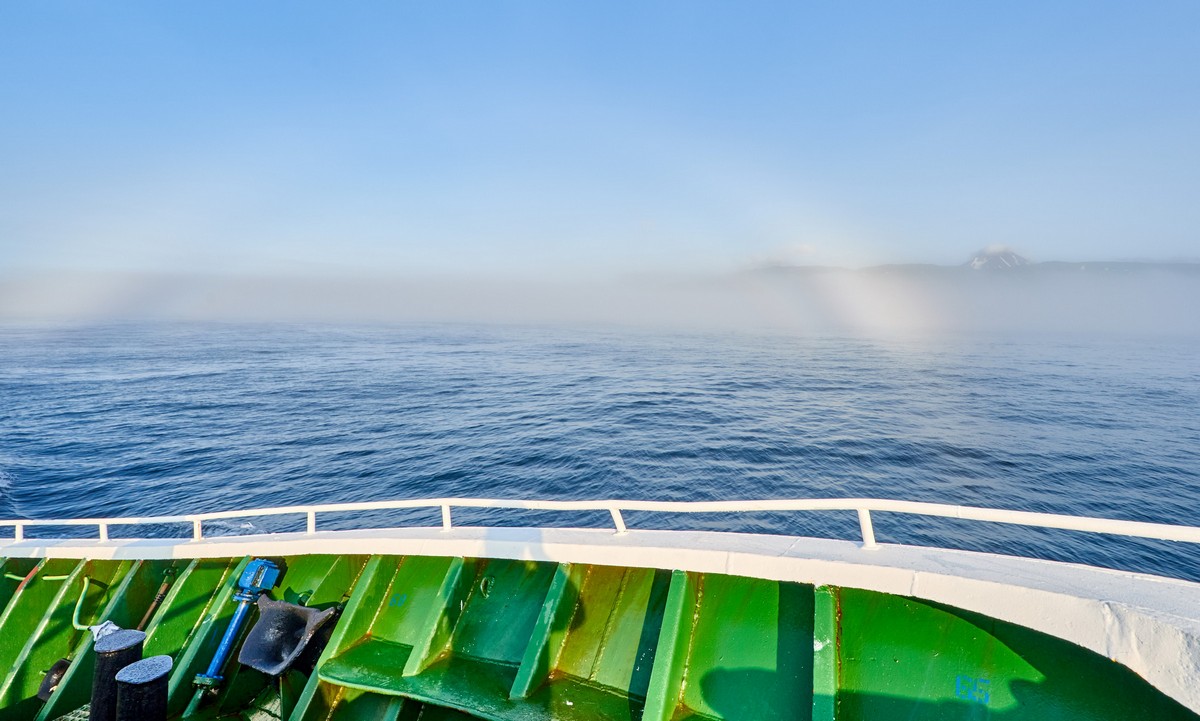 Another very experienced traveler to far-flung corners of the world (olly_ru) also saw one for the first time: 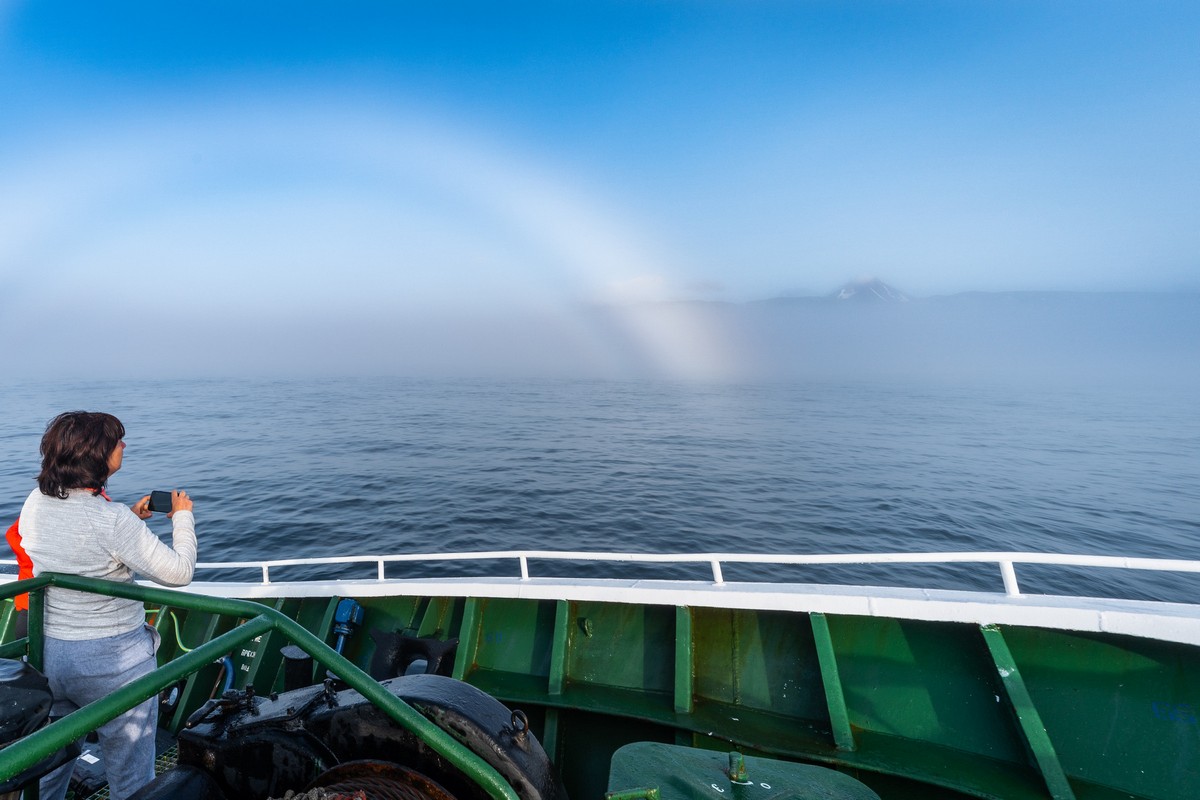 A short while later we finally get our first peek of the King of the Volcanoes poking its nose up through the low cloud:

‘Full speed ahead for that there tsar!’ 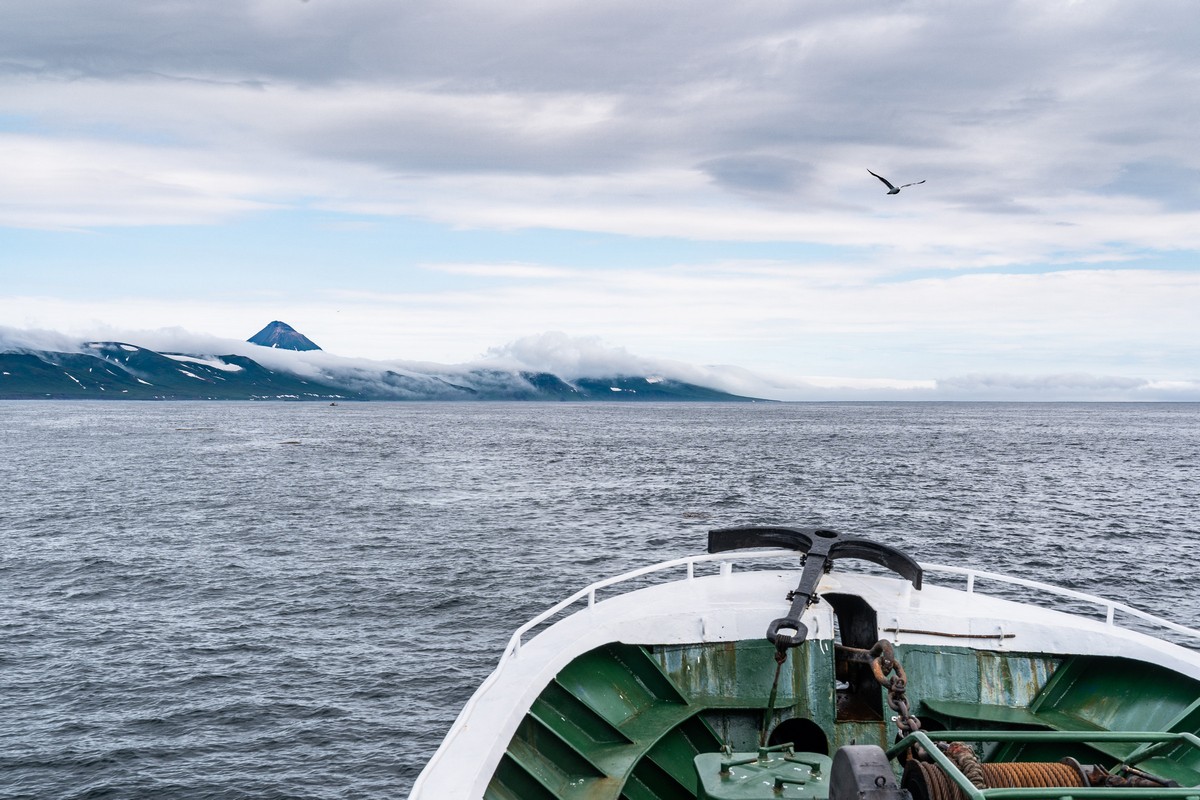 We park up and get ready to land on the island… 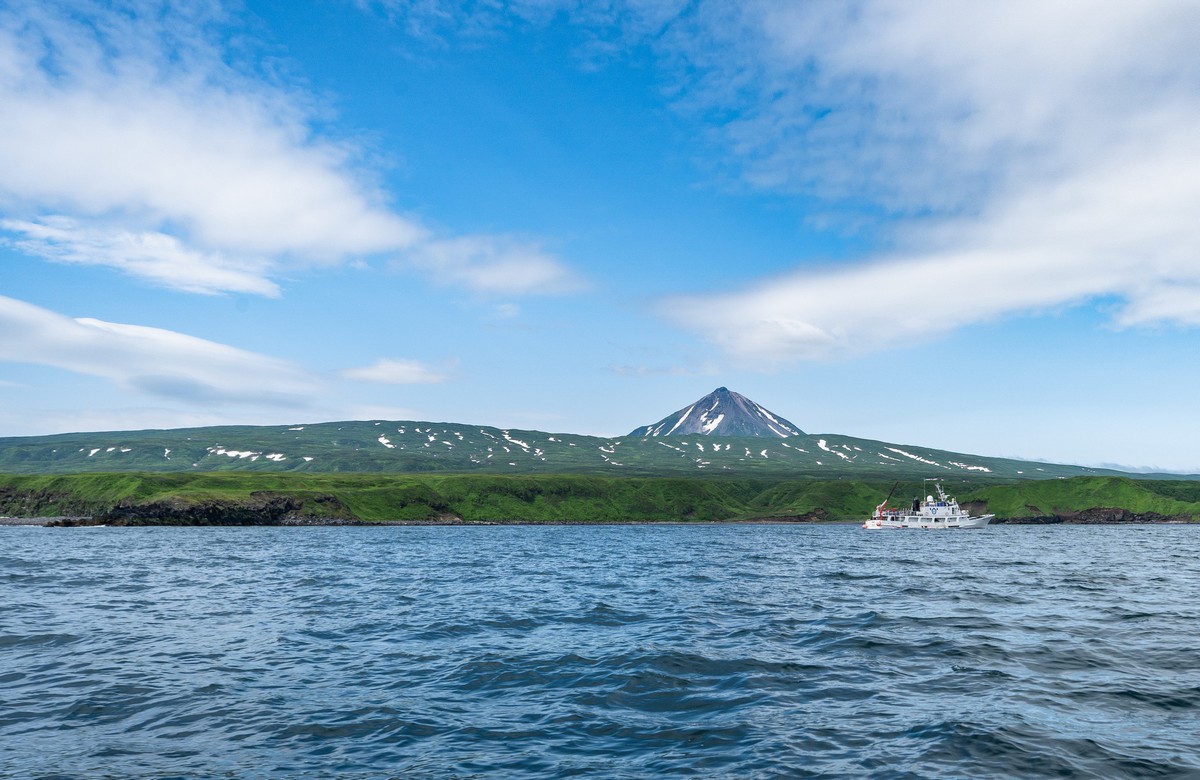 The clouds were simply magical. Straight away it was clear: one battery for the camera would be insufficient!… 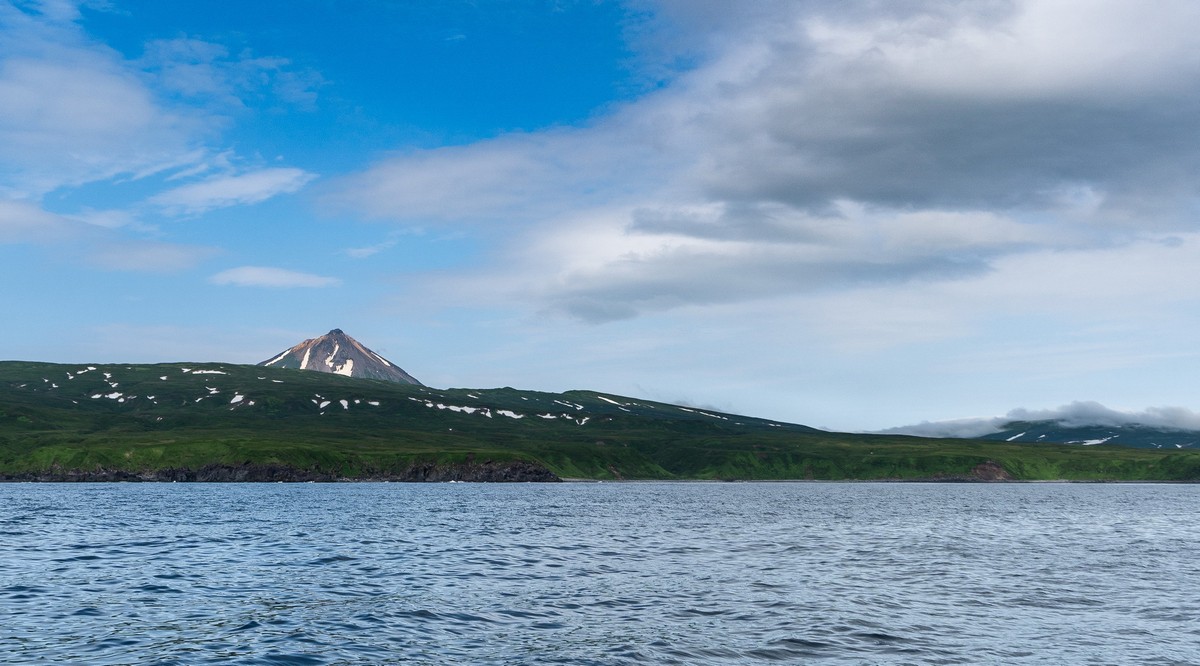 Woah. I mentioned there ‘clouds’, but there was one type in particular that stole the show: clouds known as ‘lenticular‘!

Upon landing on the island – somewhat contrasting the natural beauty of the lenticular clouds… this:

‘At least they’re metal’, I thought. They’ll disintegrate to nothing soon – I hope, unlike today’s plastics…

As we strolled along the beach we were tempted to jump in the sea – ocean, in fact (Pacific Ocean at that!) – but we decided to save that for later. Time to get up close to the main attraction on the island…

No clambering and stumbling and fumbling here. Nice path…

We were to take an old, disused path across the island, which follows the edge of the caldera itself. Here the path is visible. However, the eastern part of the path had become overgrown with dense shrubbery – so much so it was impassable: 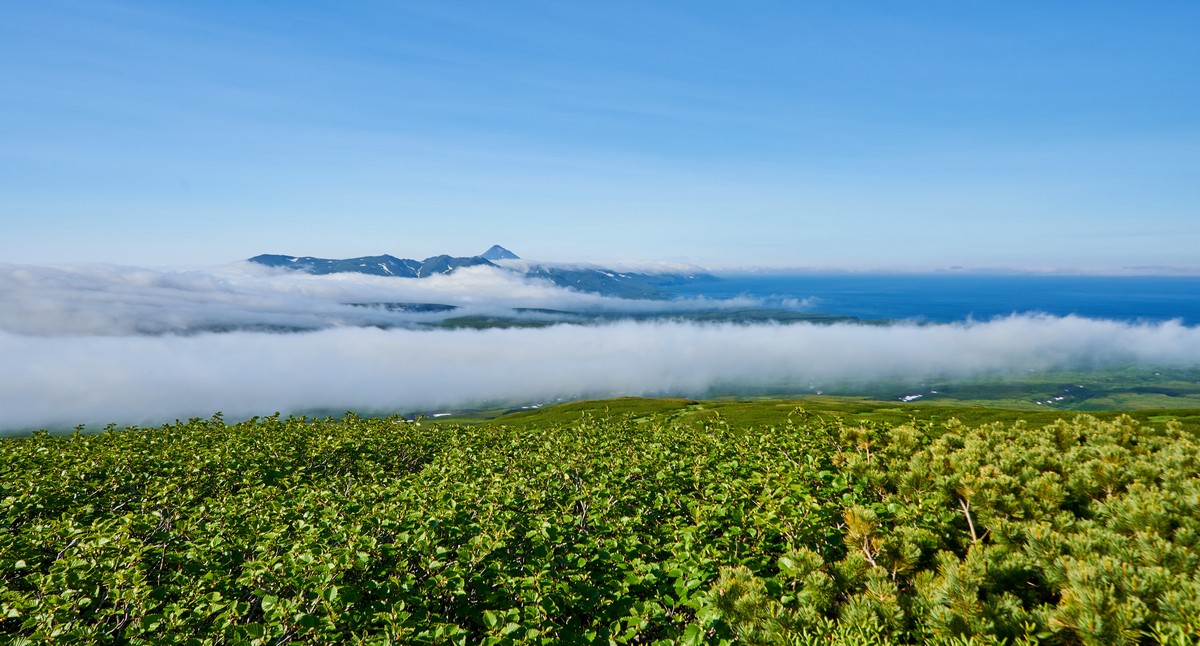 Solution: to take the western path, which wasn’t overgrown. But that would mean 15km in one direction, then the same 15km back (just like five years back), and we’d hardly have any time for enjoying the scenery – if any of it would be visible, that is (bad weather is the norm here).

But then we found out that the old path had been cleared and become easily passable! Hurray! And that path is only 7.5 km long! Hurray! So off we popped along it. Now walking up Krenitsyna is a walk in the park along a path! 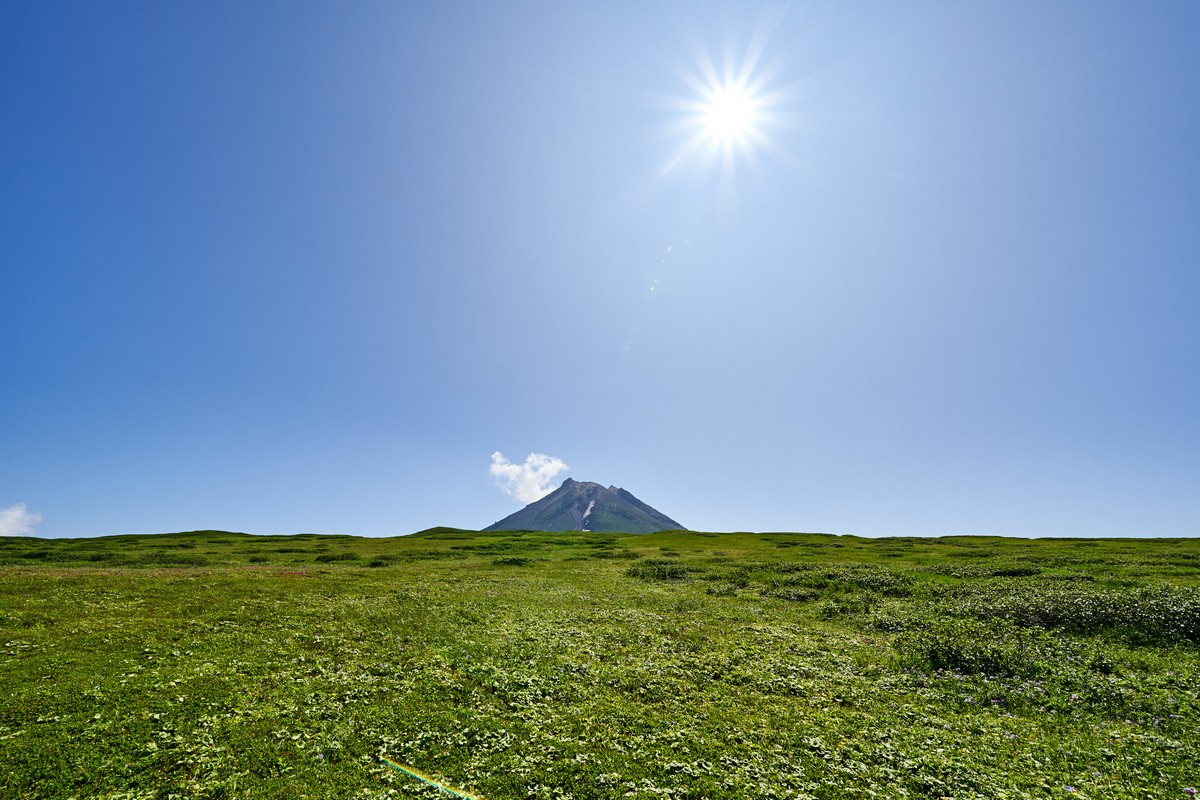 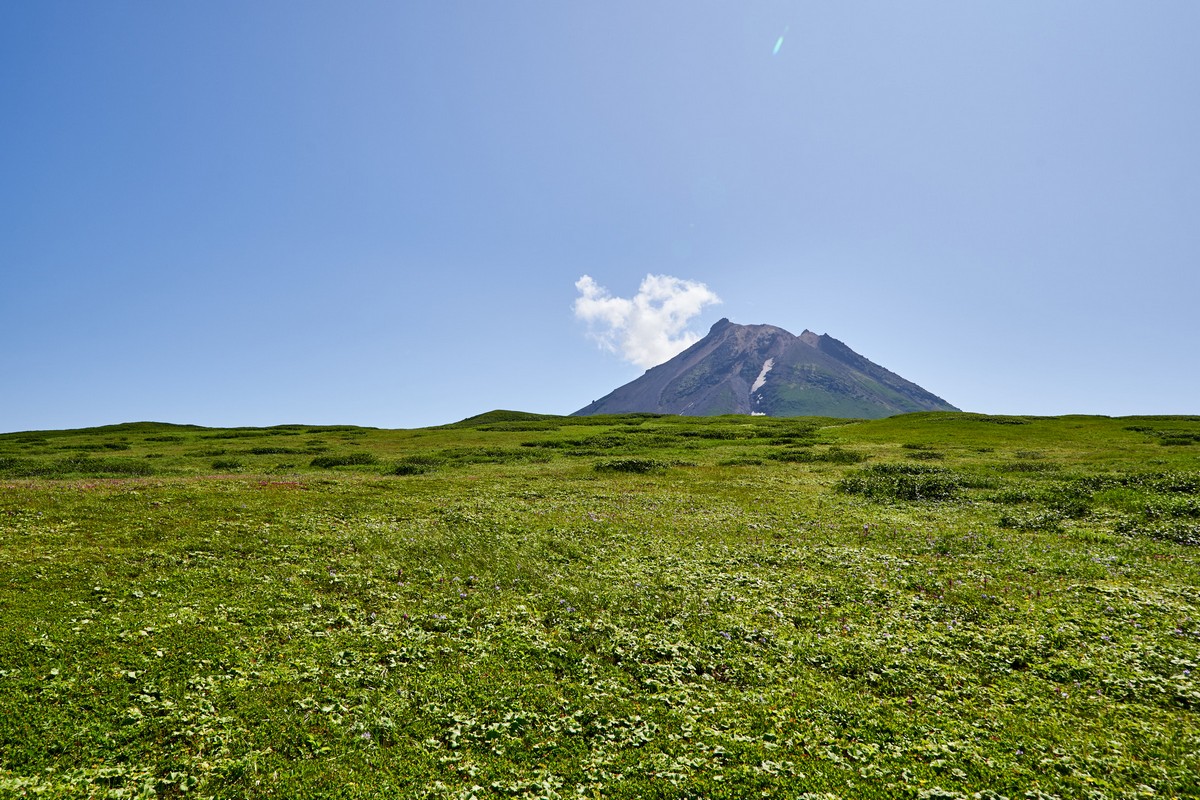 We arrive. Oh my gorgeous! Actually – that gorgeous view came a little later… 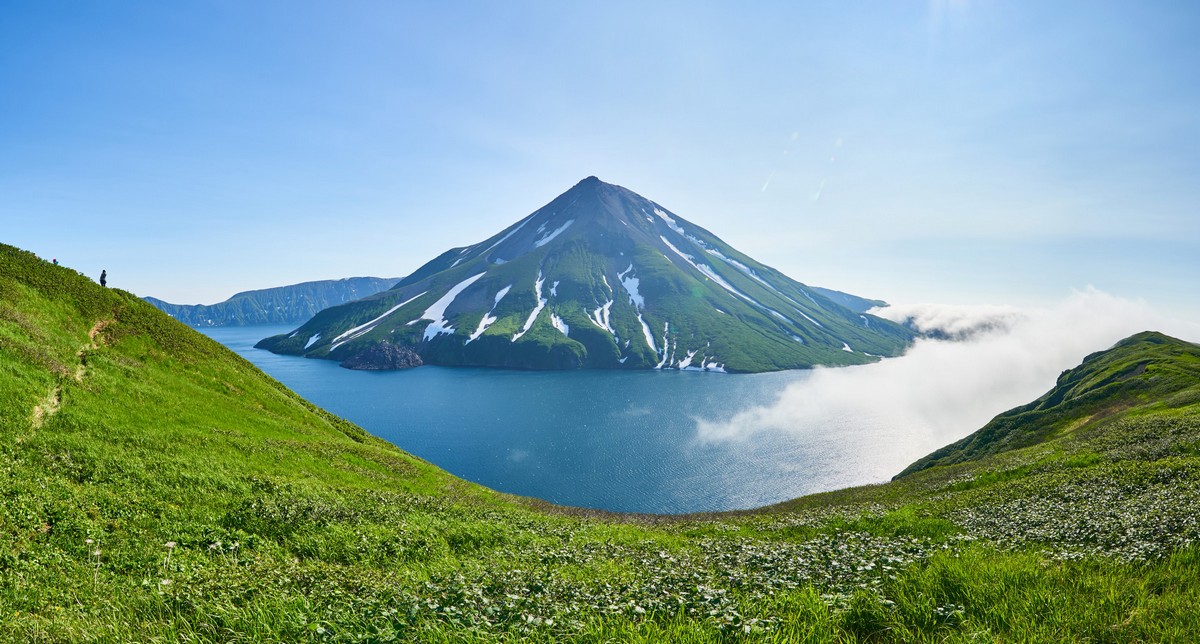 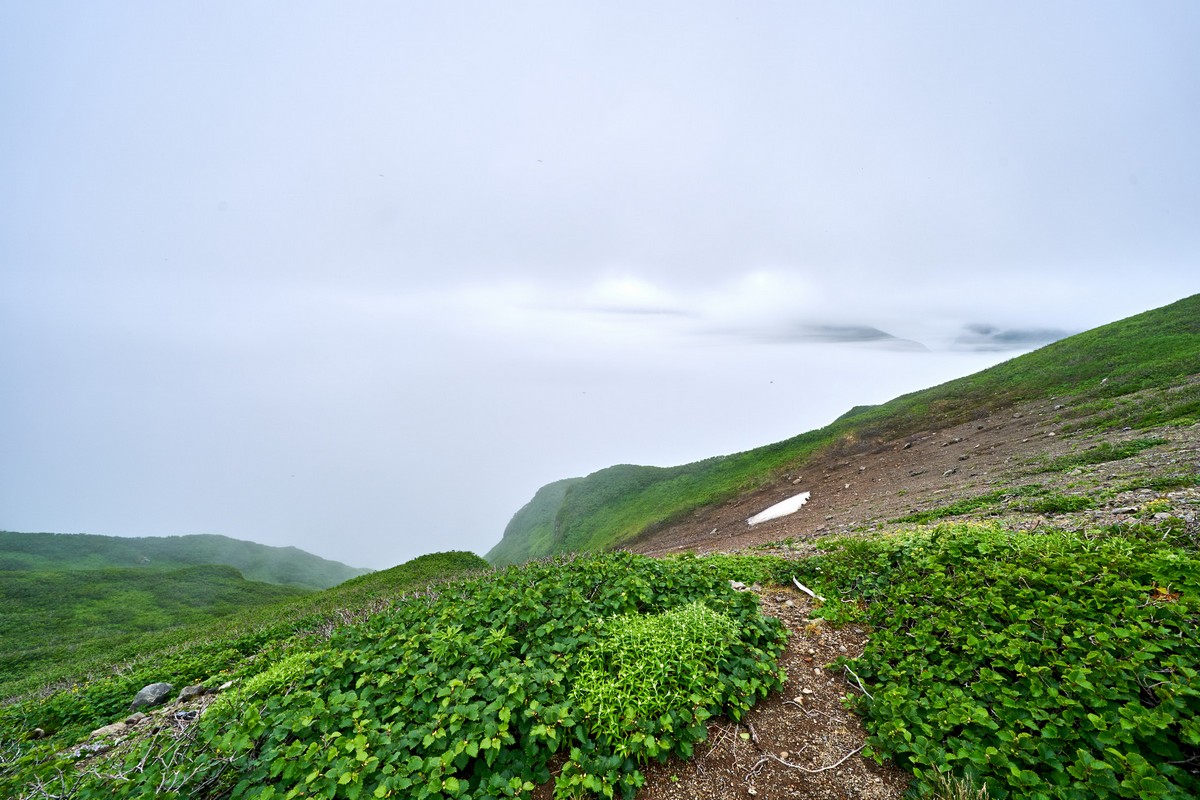 Nice, huh? How about from a different angle – is that better?… 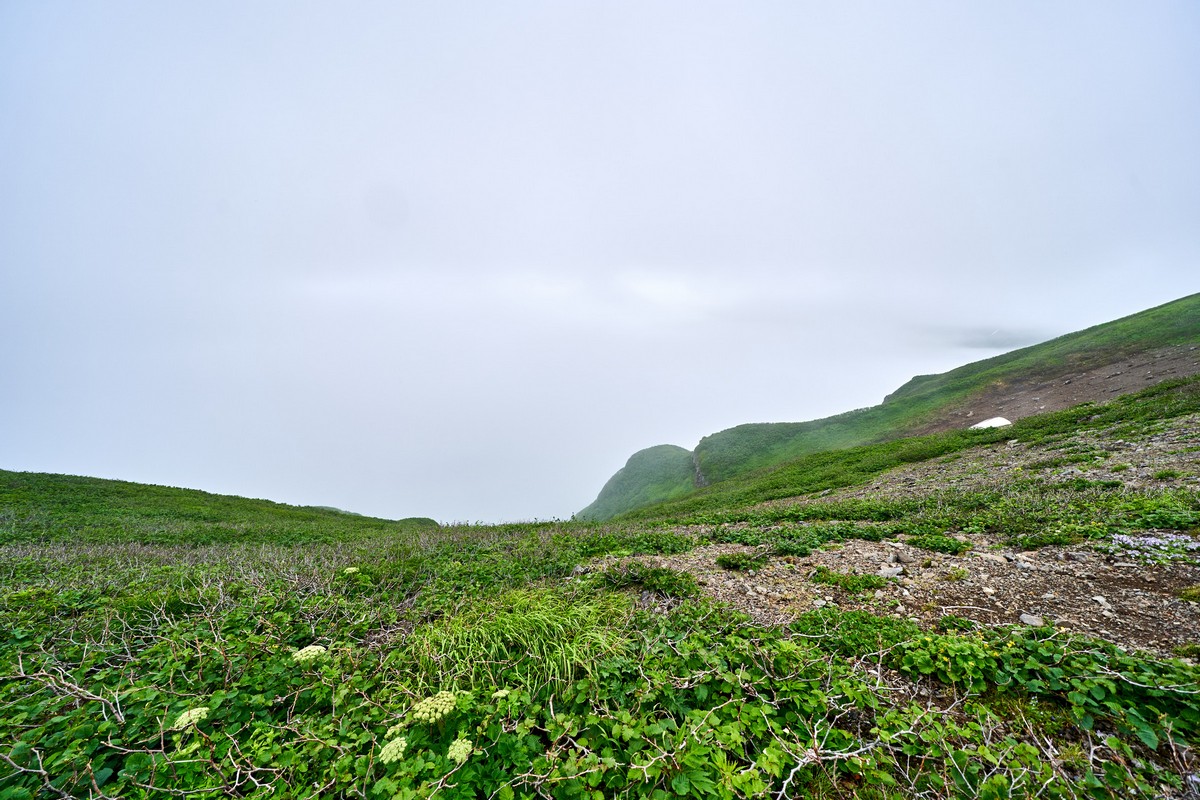 That was our Krenitsyna experience last time, in 2014. Well, we did see the lower half of the volcano as the mist was lifting, but we had to turn back by that time to make it back down to the shore by nightfall.

So. Always ready to learn from mistakes, this time we took tents with us in case the full picture wasn’t on view when we arrived. A move I christened the ‘Strategic Stratovolcano Strategem’!

Now, up there at the top of the caldera there’s no water at all. And to get down to the lake is 150-200 meters along the vertical and it’s very rough going – only for experienced trekker-climbers. But there is one place where there is water: this cute little pond! Next to it is where we set up camp. 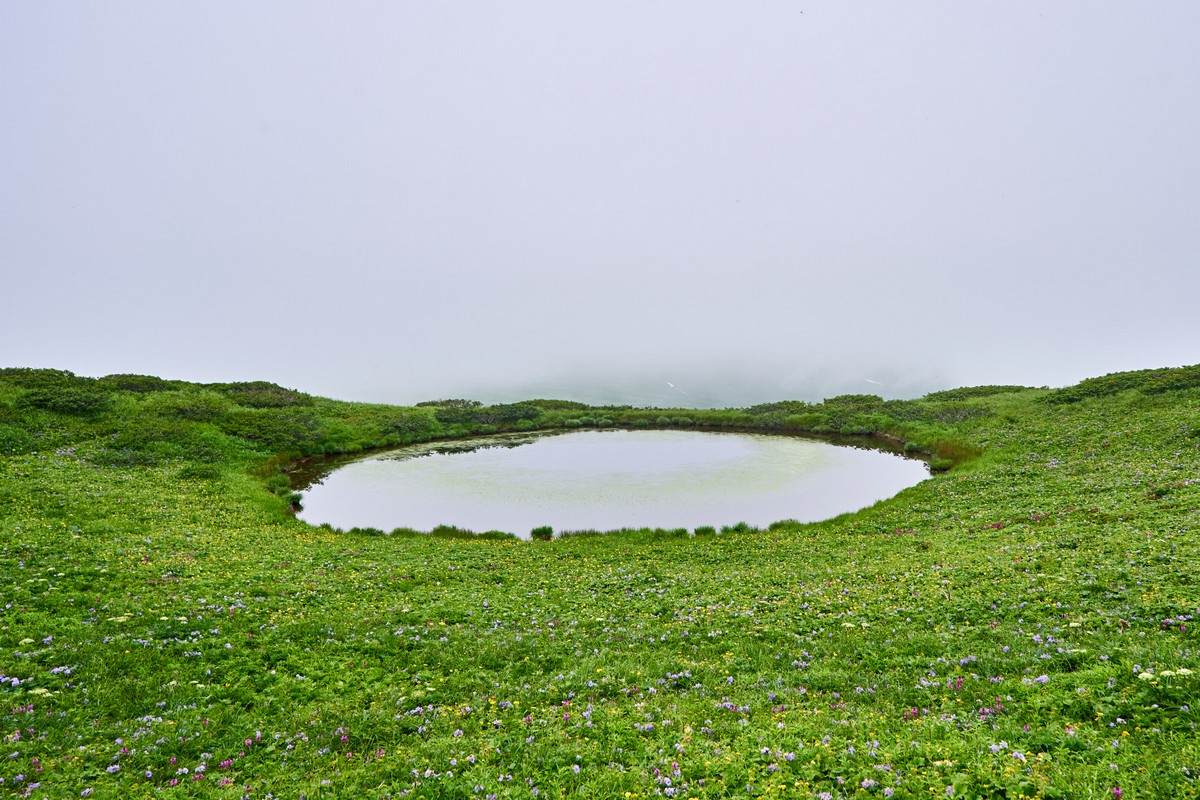 Meanwhile, the cloud starts to rise! We catch our first glimpse of the lake: 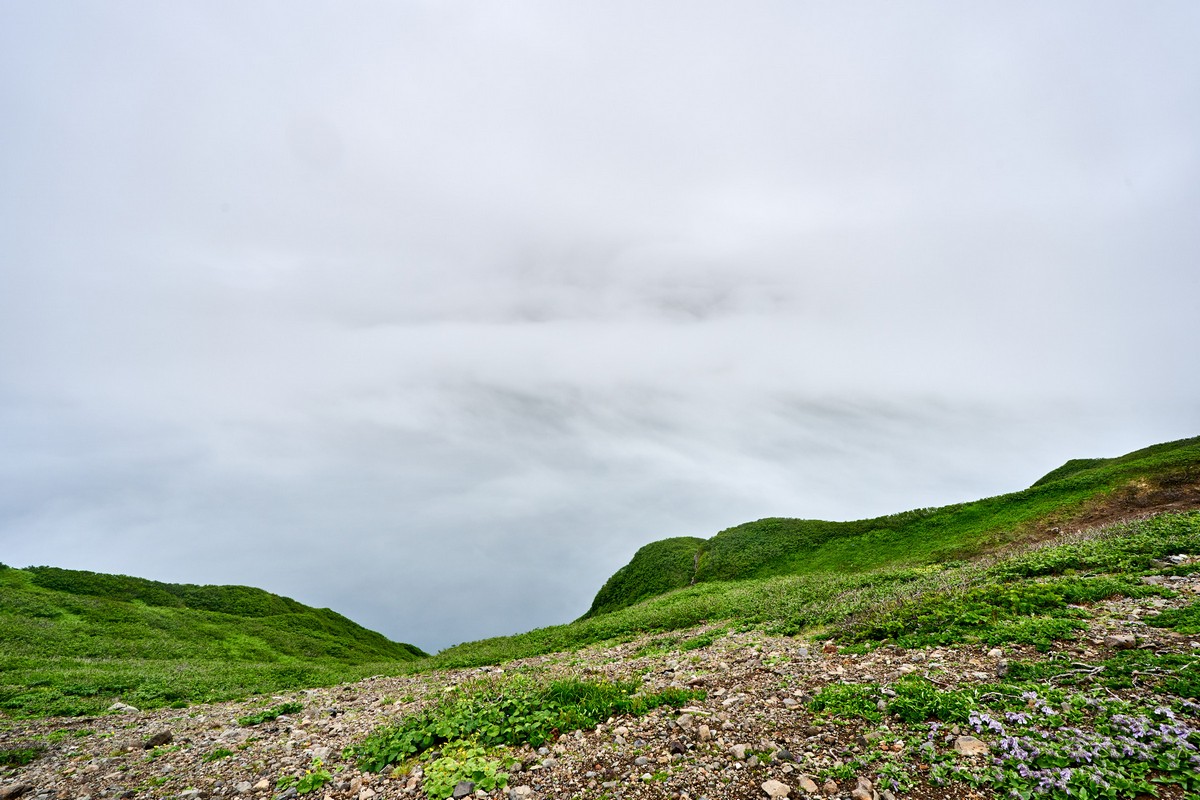 Next to appear – the base of the volcano! 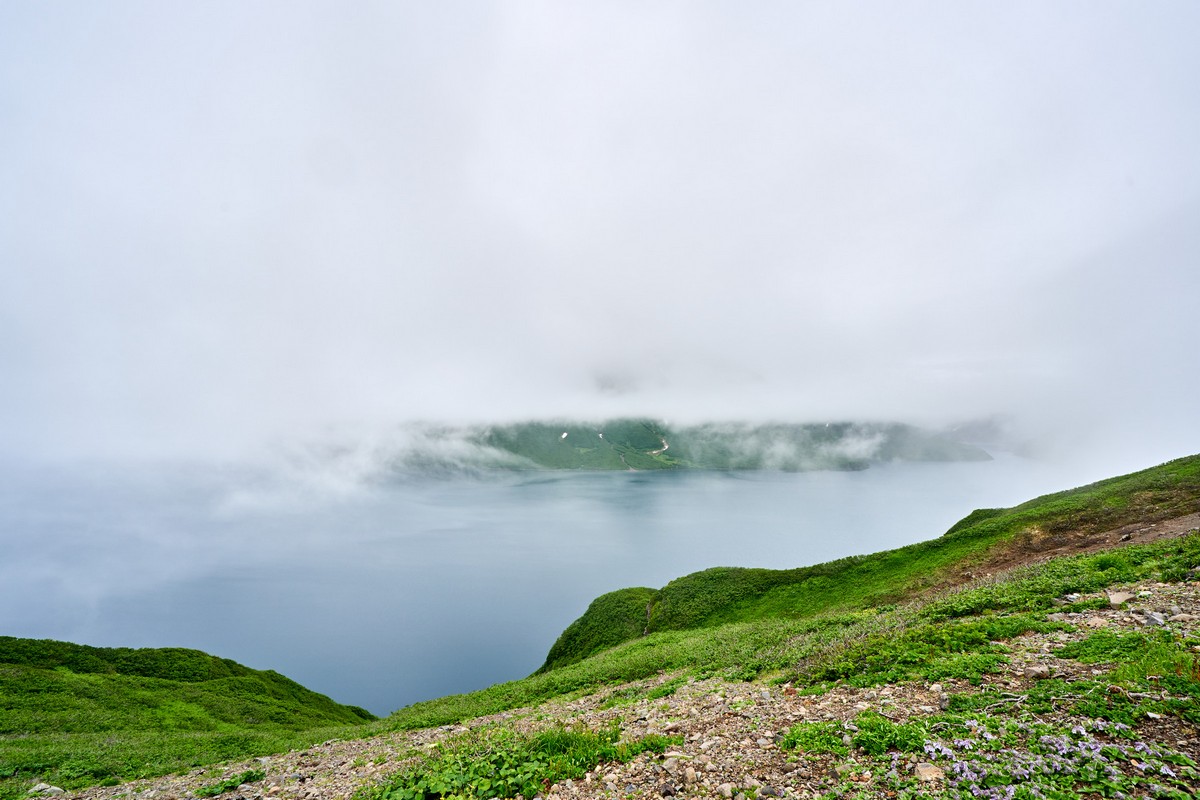 Next – the other side of the caldera:

And here he is! All hail the King! 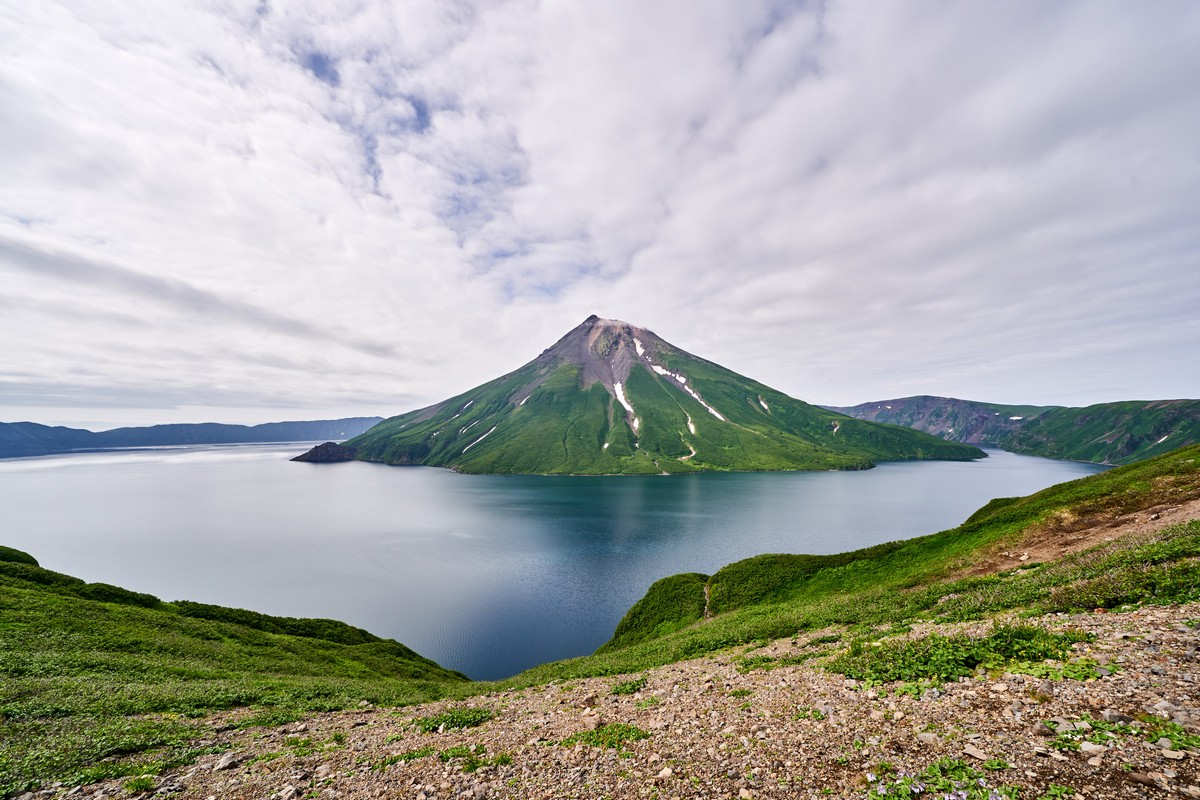 SSS working is all well and good, but I was pushed into dreaming the stratagem up by… our first climb up Krenitsyn this year! What? Twice in a year? Yes – twice this trip, to be precise. This SSS was applied to the second, because we were told how the fluke of Krenitsyn being fully visible as soon as we arrived is, like, a million to one or something. And those scary odds led to cognition that led to the three S’s ).

That’s all for today folks, but I’ll be back with more tales from the Kurilian side shortly…

All the pics from the Kuils-2019 expedition are here.