Herewith, a brief interlude from my NZ tales, since an equally interesting topic has come up…

Question: What was your longest ever flight? I mean – without a connection.

Why do I ask? Because I’ve just flown an uninterrupted long-haul silly-haul that went like this: 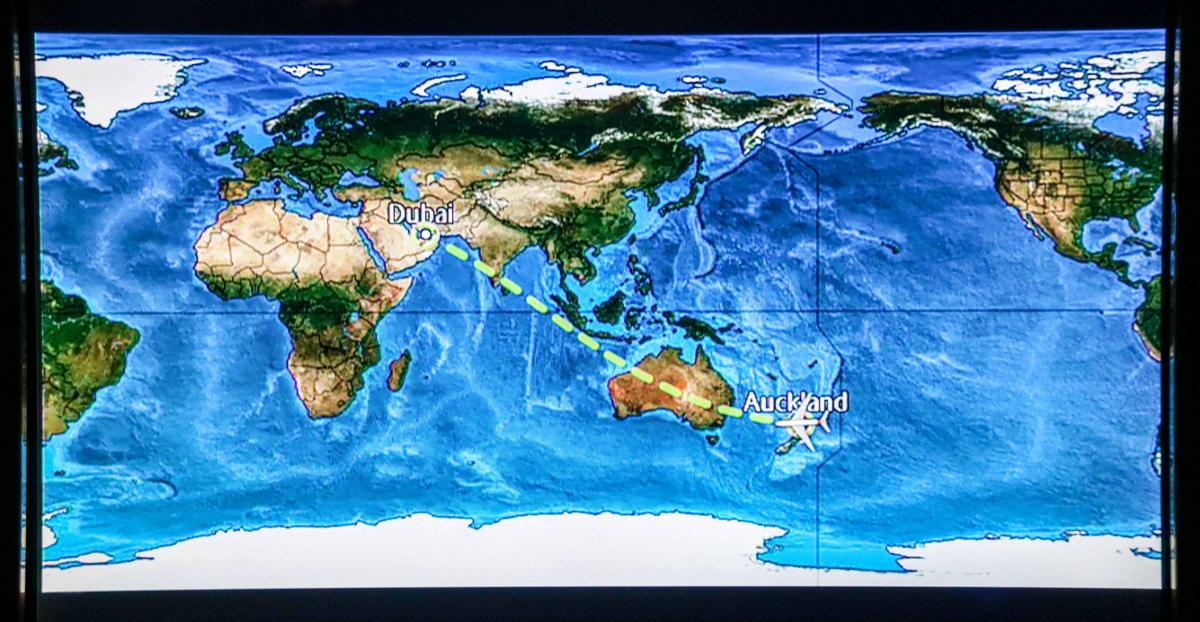 It was a reeeaaalllly long night. Though folks who live north of the Arctic Circle will scoff when I talk of ‘long nights’ (their ‘long night’ lasts half-a-year!), for me this was perhaps my longest ever night – at least down here in the lower-mid latitudes. The plane took off at 9pm NZ time – when it was already dark, and 16 hours later landed at 5am Dubai time; that is, almost at dawn. It gets dark in Auckland around 6pm at this time of year, so that night for me lasted 19 hours. A personal record, I do believe.

Turns out this flight is currently the 2nd longest non-stop scheduled flight in the world (here’s the list). However, there have been longer ones. The longest ever in history was that of SQ21/22 – Singapore Airlines from Singapore to New York, which took 18-19 hours (depending on the wind). And guess who flew it? Yessiree – me, just a week before the route closed! I was a bit miffed when I heard it was shutting down. But it seems the airlines are competing once again for the title of ‘world’s longest flight’, so things should get interesting again!…

So why didn’t we take the world’s longest flight – also from Auckland but to nearby Doha on Qatar Airways? Because the wait in Doha is seven hours; in Dubai it’s four. No matter how nice the airport is, seven hours after a 16-hour flight…– no thank you.

Btw, my third-longest flight, back in 2012, was from Dallas to Brisbane, which saw me miss out a whole day from my life! That flight’s still going strong, only it now flies to Sydney instead of Brisbane. Btw-2: my most unusual flight: 14 hours skirting Antarctica.

But now for a bit on avia-everyday life…

So, just what do you do on a 16-hour flight? Simple. If you’re able to – get six-eight hours’ sleep. Then give another hour to eating and having a bit of a wash/refresh. Half-an-hour ascending, half-an-hour descending. An hour in total of short episodes looking out the window normally – but not on this flight: pitch black out there. So that leaves us with around eight hours to fill. Like a working day. And that, incidentally, is how I recommend considering those eight hours: to get working…

So, laptop fully charged, good book in bag; I think I’m all set. Time for take-off…

Here’s my habitual routine on a long-haul:

Back to those movies… I say that the selection wasn’t up to much. However, there was a classic in there that I just had to watch again: The Matrix. It’s often interesting to see how a film has aged with time – is it like a fine wine, or is it like… vinegar? Well, this movie is firmly in the former category. So ahead of its time; so… still current today, the ideas and concepts and in there. Example: a speech by Morpheus:

“What is real” How do you define real? If you’re talking about what you can feel, what you can smell, what you can taste and see, then real is simply electrical signals interpreted by your brain. This is the world that you know. The world as it was at the end of the twentieth century. It exists now only as part of a neural-interactive simulation that we call the Matrix. You’ve been living in a dream world, Neo. This is the world as it exists today. … Welcome to the Desert of the Real. We have only bits and pieces of information but what we know for certain is that at some point in the early twenty-first century all of mankind was united in celebration. We marveled at our own magnificence as we gave birth to AI. … A singular consciousness that spawned an entire race of machines. We don’t know who struck first, us or them. But we know that it was us that scorched the sky. At the time they were dependent on solar power and it was believed that they would be unable to survive without an energy source as abundant as the sun. Throughout human history, we have been dependent on machines to survive. Fate it seems is not without a sense of irony. The human body generates more bio-electricity than a 120-volt battery and over 25,000 BTU’s of body heat. Combined with a form of fusion the machines have found all the energy they would ever need. There are fields, endless fields, where human beings are no longer born, we are grown. For the longest time I wouldn’t believe it, and then I saw the fields with my own eyes. Watch them liquefy the dead so they could be fed intravenously to the living. And standing there, facing the pure horrifying precision, I came to realize the obviousness of the truth. What is the Matrix? Control. The Matrix is a computer-generated dream world built to keep us under control in order to change a human being into this. … I didn’t say it would be easy, Neo. I just said it would be the truth.”

“At some point in the early twenty-first century all of mankind was united in celebration. We marveled at our own magnificence as we gave birth to AI”? Ha, ha. I’m not marveling at what is termed AI in the IT security industry in the early 21st century. But, as they say, ‘it’s only a film’ :).

Can’t see Australia down below out the window as it’s dark, but I can dive into my archives for some Oz nostalgia… :).

Oh my globe-hop, we’re descending already! But need to stay quick-witted and quick-footed: need to get to the showers before the rush come 6-8am…

Showered, I check the Wi-Fi, and to my amazement it was as fast as a Ferrari. It was as slow as a snail last time. Well done Dubai!

We get our connection and off we fly – above Teheran and then Baku; next stop: Moscow.

Interlude over folks; back soon with more tales from down-under…