There are just two ways to get to the white waterfalls I told you about in a recent post post. You can either walk from the village Pauzhetka (en route to the peaks of Koshelev volcano), or – just the opposite – walk from the same volcano en route to Pauzhetka. So you see: all roads lead to and from Pauzhetka. Accordingly, this post is dedicated to the small yet significant – and most curious – village of Pauzhetka…

Pauzhetka is a village of extremes:

First: It’s probably one of the remotest settlements on the whole of the peninsula. To get there in a regular road car is probably impossible. To get there in a 4×4 or off-road vehicle from nearest town of Ust-Bolsheretsk takes up to two days (including a long stretch along the shore of the Sea of Okhotsk, and probably entailing a few ferry crossings). On the other hand, getting to the village by air isn’t too much trouble: there are scheduled flights once a week (from Petropavlovsk) to Ozernaya airport, which isn’t far from the nearest village on the coast – a mere 30 kilometers from the Pauzhetka. The only other means of transport that can be used to get there is chartered helicopter.

Fourth: Though the village is tiny and very inaccessible, it nevertheless has its own… geothermal power plant – Pauzhetskaya (the first power plant of its kind in Russia (or maybe even the USSR – I’m not sure)! As a result, the local area is supplied with free electricity and hot water! Free, as in – zero rubles! And it comes in seemingly unlimited supply: no electricity meters… nothing: as much as you want to use, whenever. Leave the TV on – fine! Never turn the iron off (if that’s what really floats your boat) ok! And it’s not as if the local authorities discourage such wanton waste of energy supplies: they don’t bother turning off every home’s central heating… ever! See – told you the place is one of extremes ).

(Btw: I’ve written about Pauzhetka before.)

AAAnnnyway, that’s all beside the point (yes, I do like to digress).

What makes Pauzhetka so significant to me is that you need to go through it to get to the nearby OMG-stratovolcanoes – Koshelev and Kambalny. Now, since Pauzhetka is located in such a touristic paradise, you might think that it’d be all… Davos-like: nothing but hotels and guesthouses and restaurants to cater for the tourists. Alas – nope. Pauzhetka doesn’t do tourism – for a few reasons.

First, this place is inaccessible, literally middle-of-nowhere, and literally unheard of (almost). Just try Google photos of Koshelev Volcano: my photos are the first to be shown!

Second, getting here ain’t cheap (in part because it’s so hard to get to), which reduces its average-tourist magnetism to around zero. And for the serious explorer-expeditioner-climber, the volcanoes are just too easy to conquer:

– What were you climbing this summer?
– I did a couple volcanoes in Kamchatka.
– Cool. I hear Kamchatka’s the bomb when it comes to serious volcanism. What altitudes did you get up to then?
– Ah. Er… 1800 and 2200 meters.
– Oh…

Accordingly, every tourist passing through Pauzhetka fits easily in this here ‘tourist base’ made up of two buildings with sleeping quarters, the inevitable pool filled with hot thermal water, and lots of vegetable patches and greenhouses: 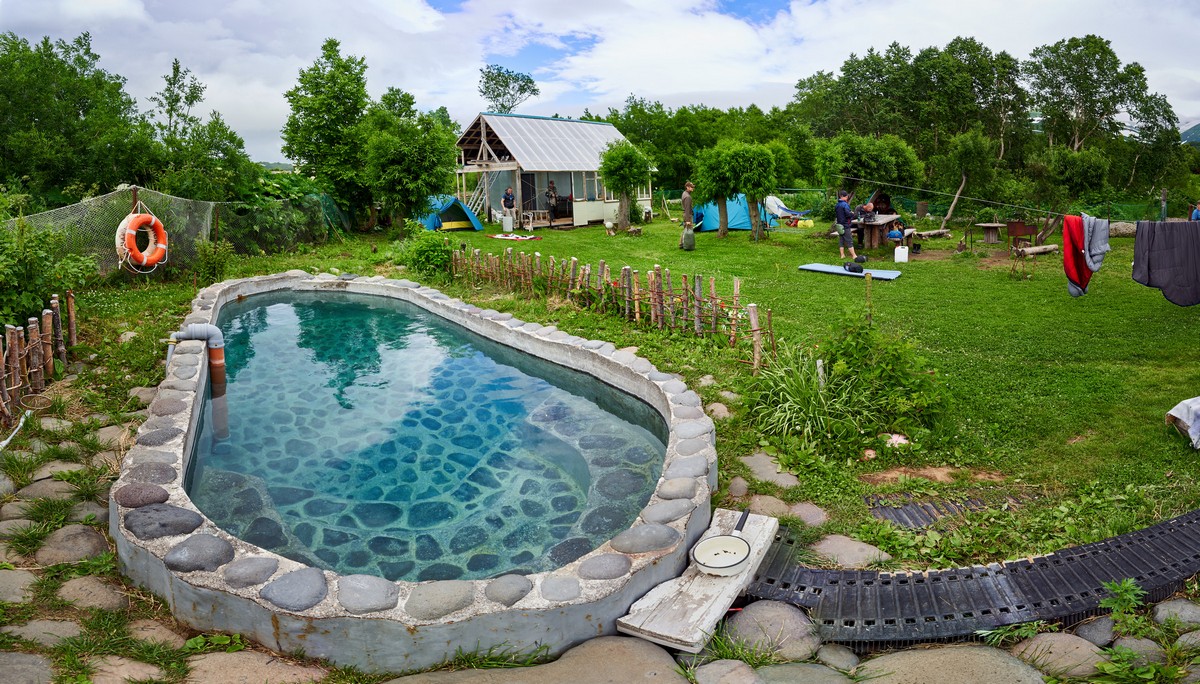 First, these are greenhouses supplied with as much free hot water as needed all year round. Second, the soil here is super fertile volcanic soil packed with mega-doses of the minerals fruit and veg love. Third, there’s the industriousness of the locals who tend the greenhouses… 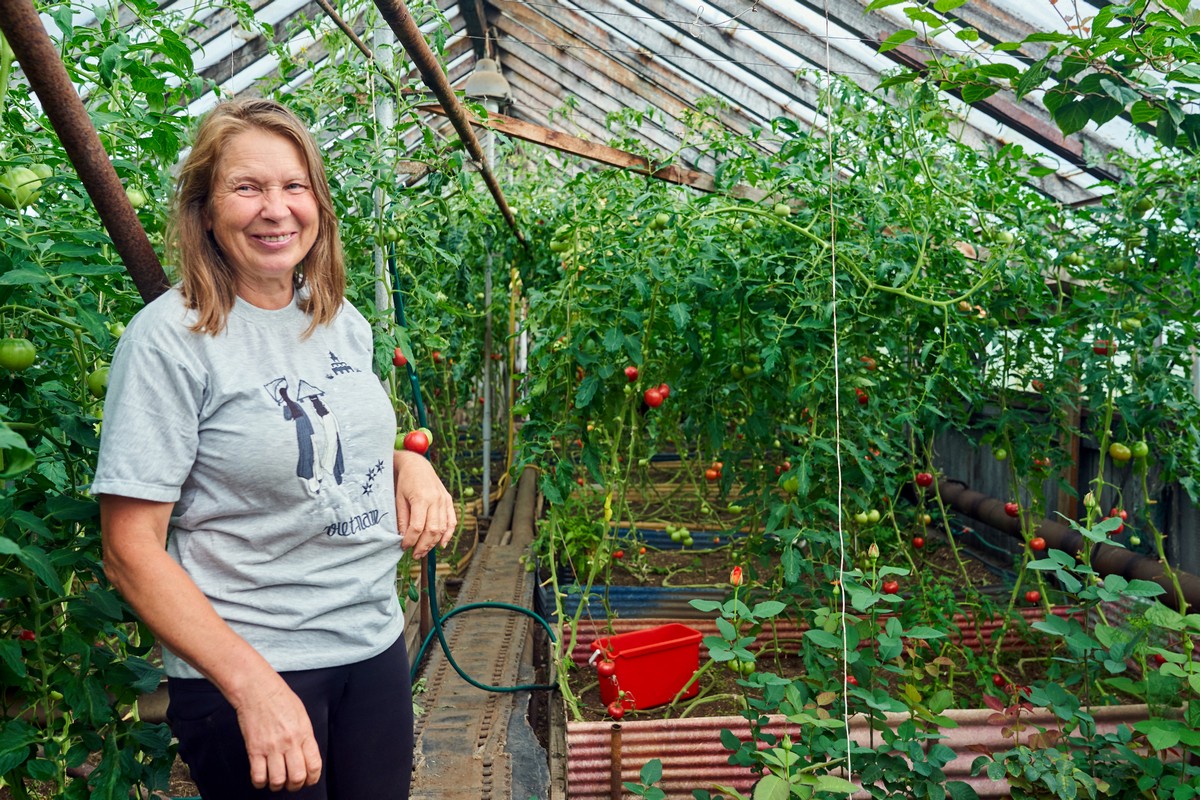 Let’s have a look inside…

First to catch the eye are the many tomatoes – both small and massive!

Not only do the tomatoes look amazing – they taste it too! And you don’t need to add salt to taste – all the minerals and salts are already ‘included’ in just the right proportions! 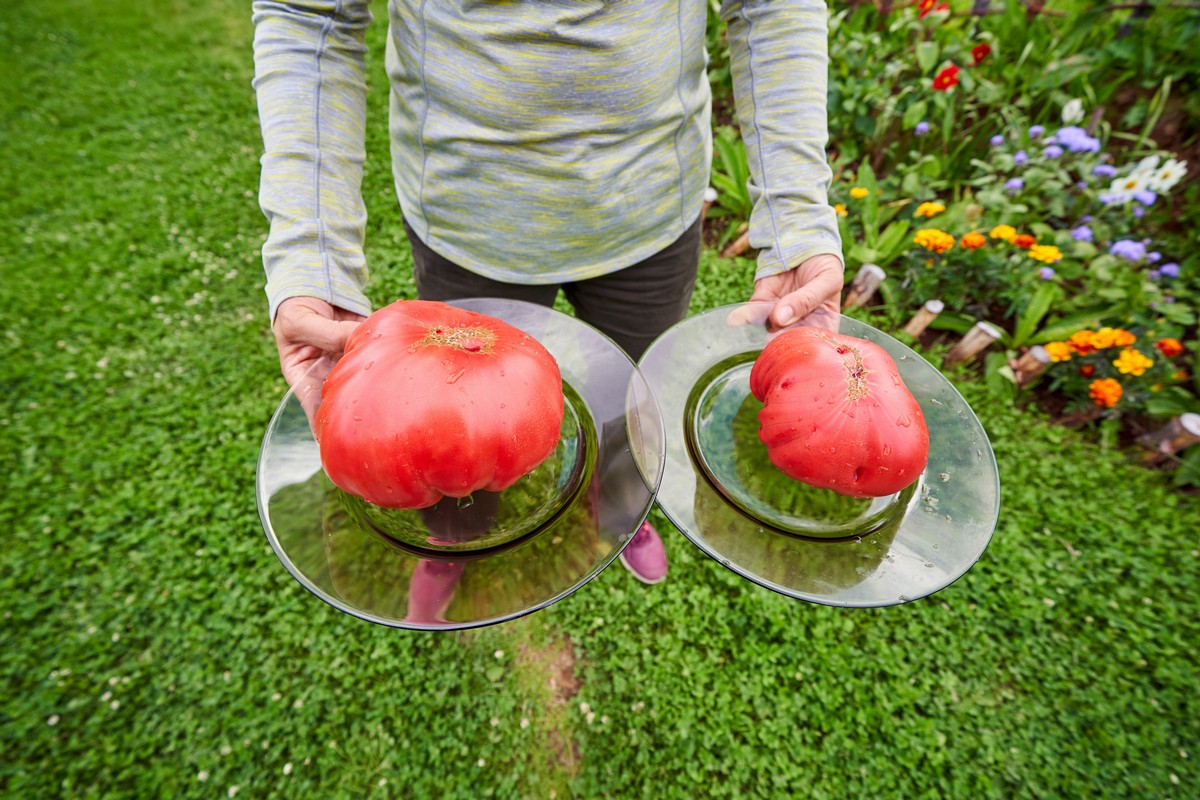 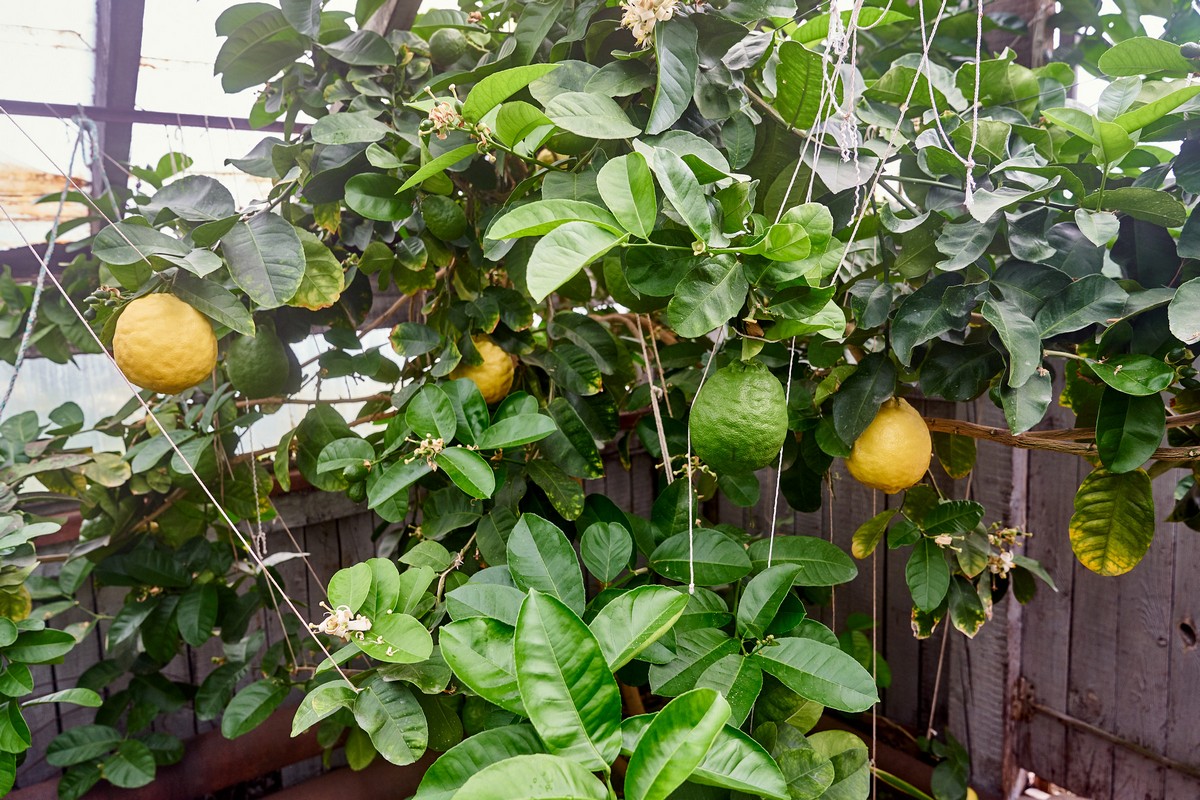 It all reminds me of the greenhouses in Iceland where they grow bananas – also using thermal waters:

Even the golf balls here are massive! This volcanic soil really is something:

What makes this abundance of the juiciest, tastiest, biggest fruits and vegetables all the more remarkable is that it’s all grown in a predominantly harsh climate. Example: the snow over there – in August, at just 300-500 meters above sea level. 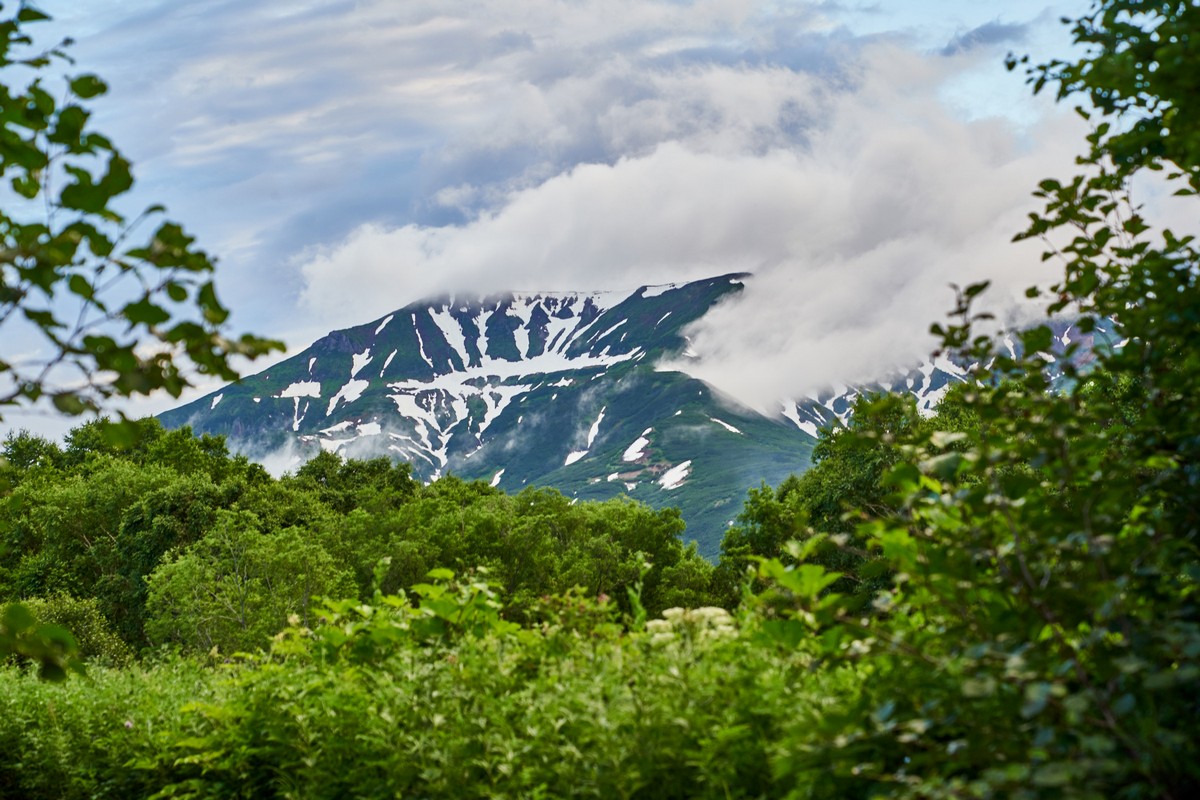 And 30 kilometers away on the coast it’s all arctic-like tundra, moss and stone, cold and wind. But over here, in the hollow between volcanoes and with thermal water on tap – a veritable paradisiacal vegetable patch! 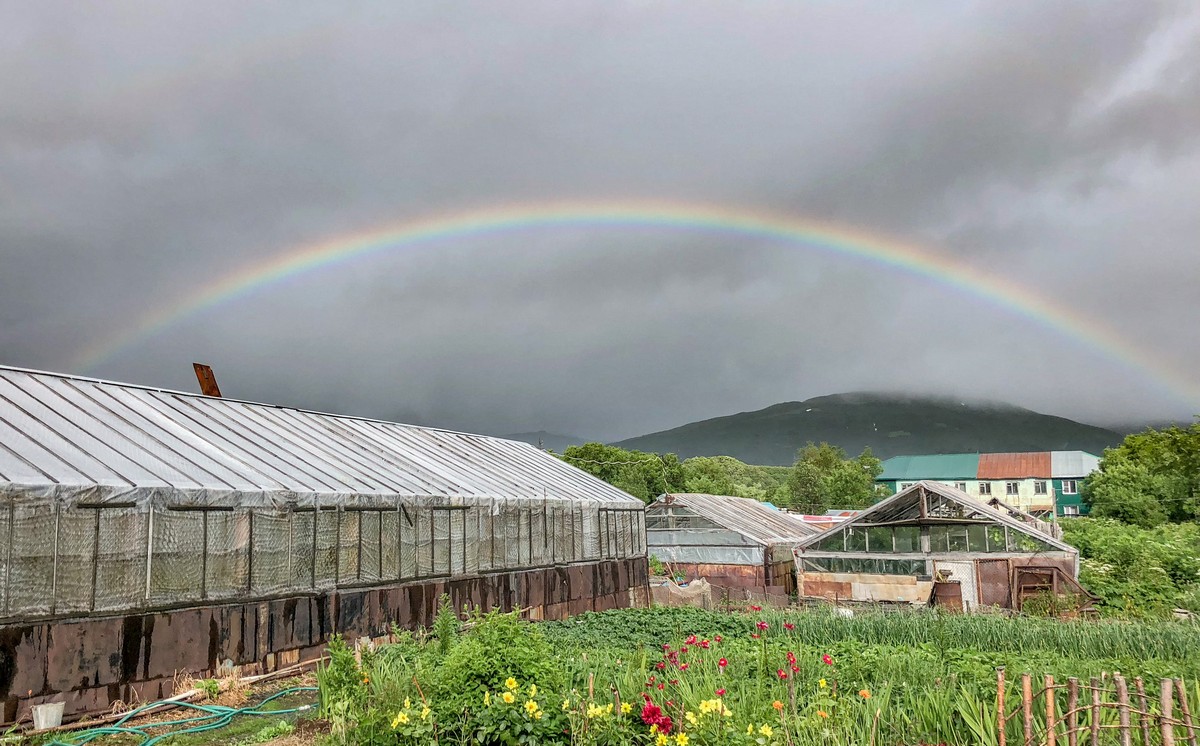 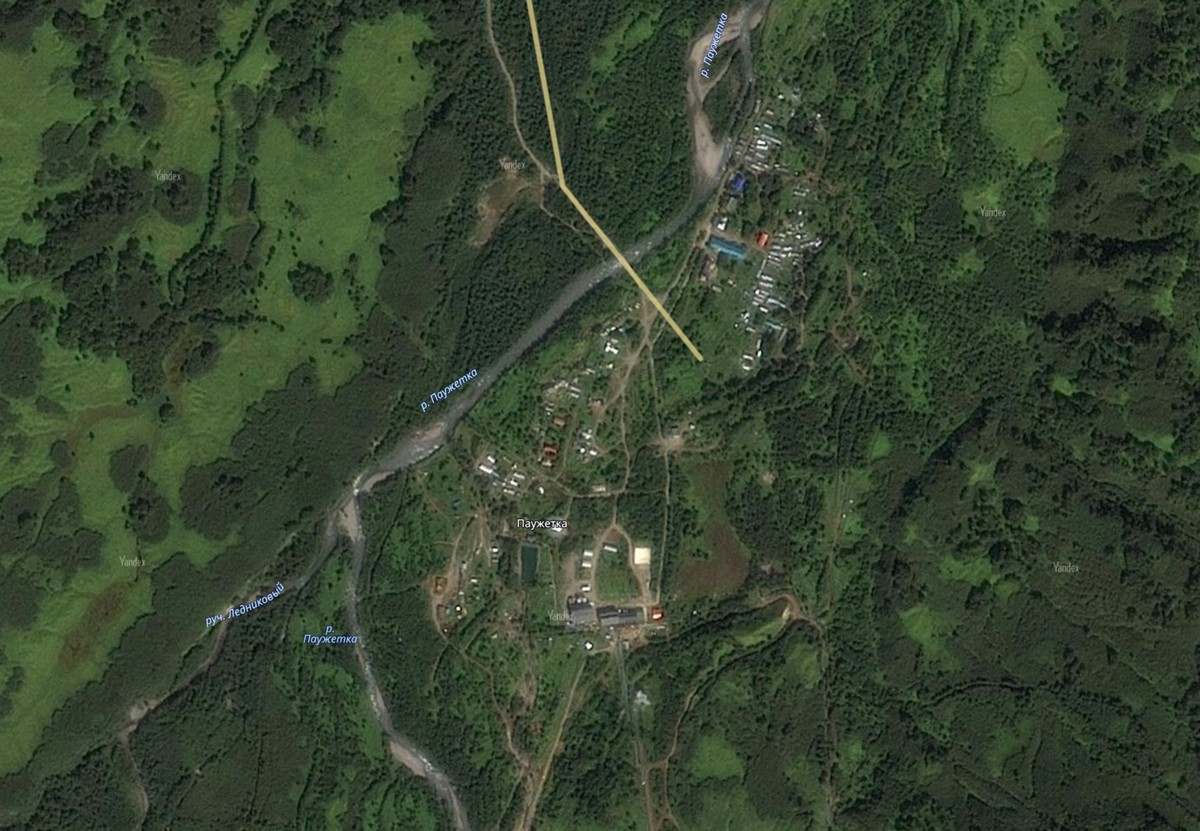 After tasting some of the fresh produce it was time for us to move out and up – toward the volcanism, of course…

All the photos from Kamchatka-2018 are here.