It’s been a while hasn’t it? Perhaps one of the longest ever stints away from my cherished blog. But with this post I am clearly back and raring to go, so, without further ado, let’s get this re-fired up…

And what better way to fire things up than a first installment of tales from the volcanic side, which also happen to be from the far-eastern seaboard-of-Russia side – that is, from Kamchatka!

Now, I have to admit that this was not – by far – the most outstanding of my many trips to the peninsula. One key factor was the weather this year; while Europe was having possibly one of its finest summers ever weather-wise, over in Kamchatka the weather was truly terrible. All the same, as ever, there’s still plenty to tell and show (photographically) you.

Tourism comes in all shapes and sizes. There are lazy beach holidays (or not so lazy if you’ve got the kids with you:); there are the more (grown-up) cultural holidays featuring museums, ruins, monasteries and other such historical attractions; there are shopping holidays… all of which are very popular with the masses. There are oceangoing holidays – be they exclusive affairs on expensive yachts with a helicopter on the deck or the more democratic huge ocean-liner-based ones. Then there are road trips on which you simply look around at the passing surrounding geography – that’s also tourism.

But here I’ll be telling you about a different kind of tourism: the kind during which you need to use your legs a lot with all the walking and climbing, and have a backpack on your shoulders carrying warm clothes, cameras and batteries, some snacks to keep you going for the next few hours or days, and sometimes even a tent. This is tourism of the hiking-trekking vibe, involving mountains, sometimes sports, sometimes volcanoes… normally requiring of the participating tourist both experience and training (sometimes you can do without both experience and training if the difficulty/distance level isn’t so tough).

Sporty walking, skiing, climbing, river/lake/sea/ocean-based tourism – there’s plenty to go at. But there’s one more you may not have heard of: beach-walking tourism! No, I don’t mean walking across a beach to your preferred spot for a spot of sunbathing-cocktailing-reading, and I don’t mean walking to the beach-volleyball court either. I’m talking when you trek for miles upon miles with a heavy backpack along a very long beach. Kinda like this:

And so it goes – as we did: along a hot beach warmed by the sizzling sun, mile after mile, chatting with fellow beach-walkers, normally on eternal philosophical matters, or meditating on the surrounding landscapes, or thinking about nothing special at all, just happily plodding – in the moment and all that – or humming along to the tune that’s trapped inside your head since someone whistled it earlier in the week (grrr)!… And then, all of a sudden, you grind to a halt: it’s time to traverse a river (not many bridges in Kamchatka:)! 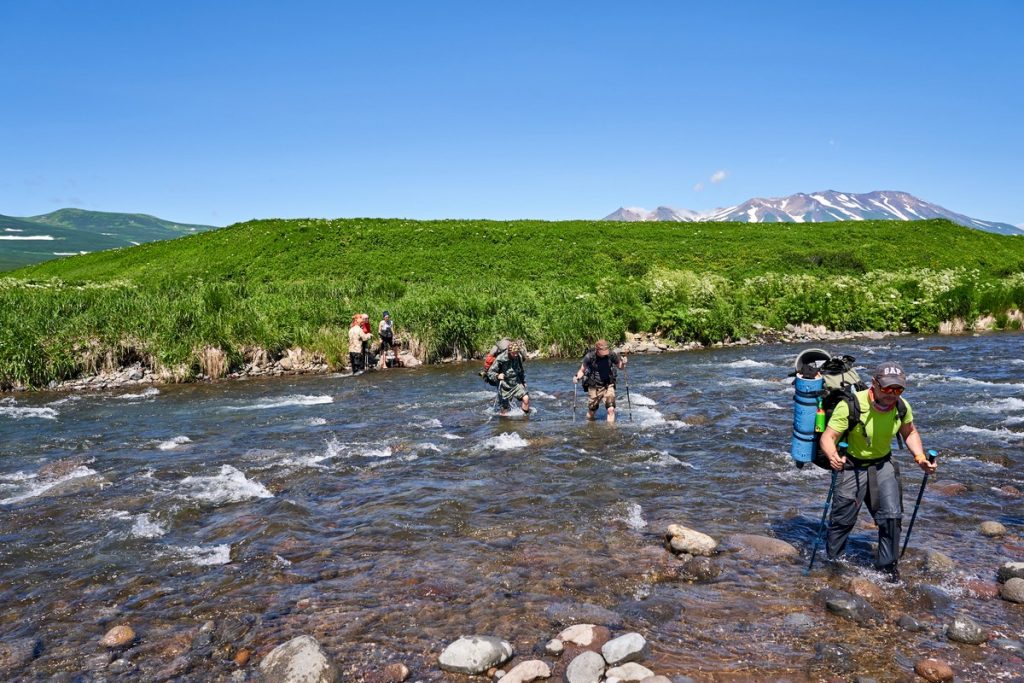 Most rivers here fortunately are quite shallow – below knee-deep. The only thing you really have to be careful about is the occasional strong currents, which nearly knock you off your submerged feet. Oh, and slippers poorly secured to one’s back-pack can easily end up sailing off down the river and into the sea…

…But that wasn’t as bad as was first thought: the polite sea duly returned said errant slippers back to the shore a short while after their escape! And you still don’t believe in miracles?

In all there were around 10 such small rivers to cross. Each time we had to grin and bear the seemingly nearly freezing (though very clean) water, and then a quick dry-off and we were on our way further along the beach, forever taking in the hypnotically beautiful surroundings – and snapping them too:

Suddenly, on the horizon – a massive plume of smoke. To be expected of course: barbecue season ).

We all ground to a halt: “A bit big for a barbecue, that…” 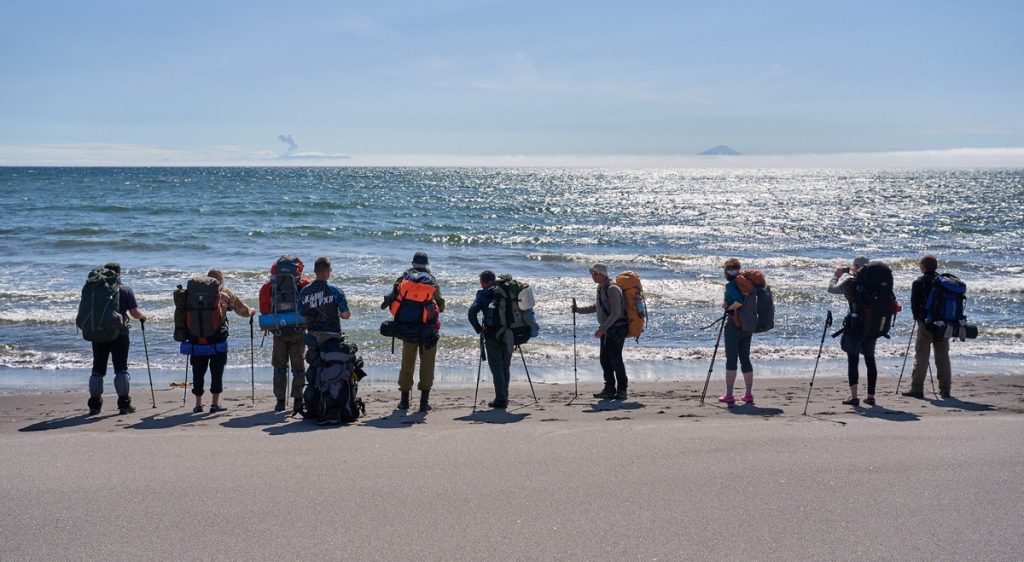 Aha! That’s no barbecue: it’s Ebeko volcano on the Kuril island of Paramushir. It had clearly decided to remind its surroundings of the significance of its existence. In the pics here it’s around 70 kilometers away. 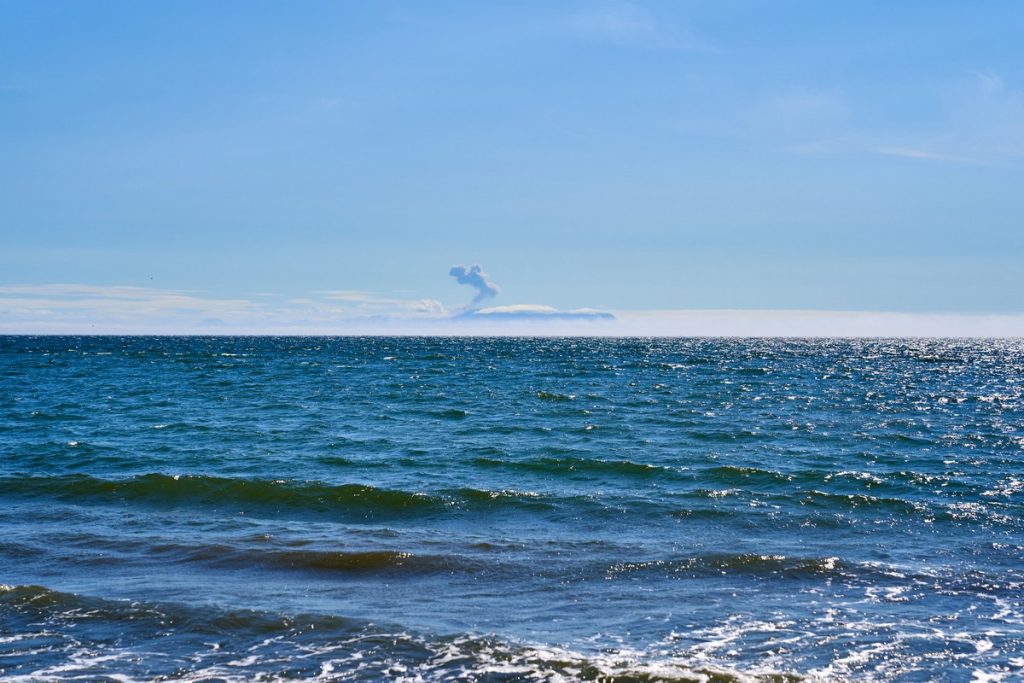 Next to it is the pyramidal volcano named Alaid on (the Kuril) Atlasov Island, which is much less active than its neighbor – very rarely known to belch out mere smoke, never mind lava: 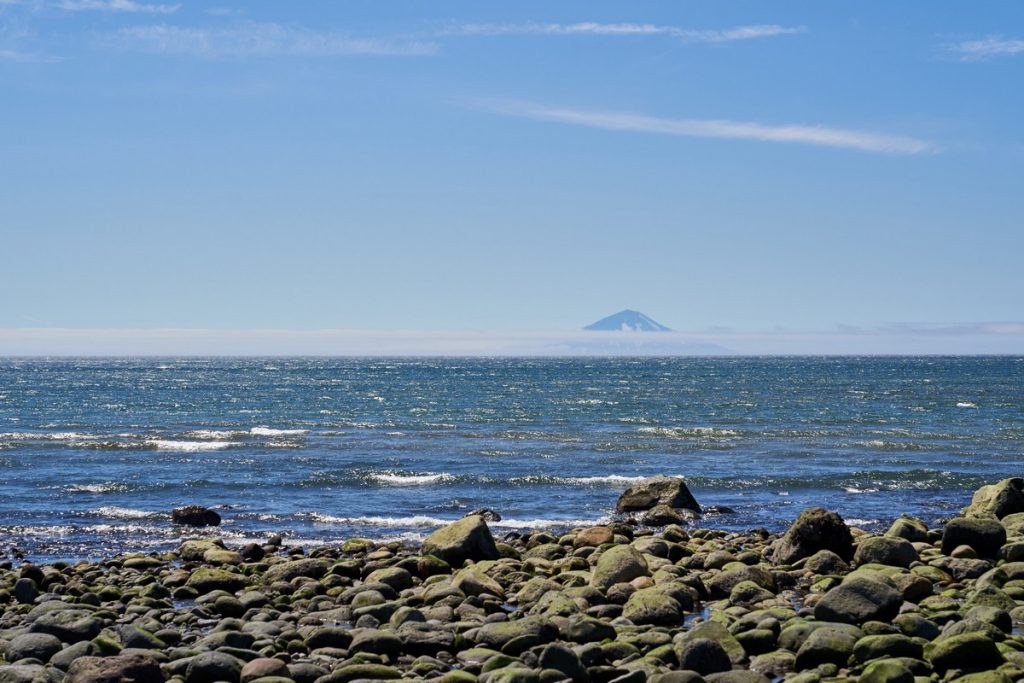 After our brief volcano-gawp respite, we headed on – for more contemplation, meditation and philosophizing.

Suddenly – Oh my ghoulish! Large bones on the beach: 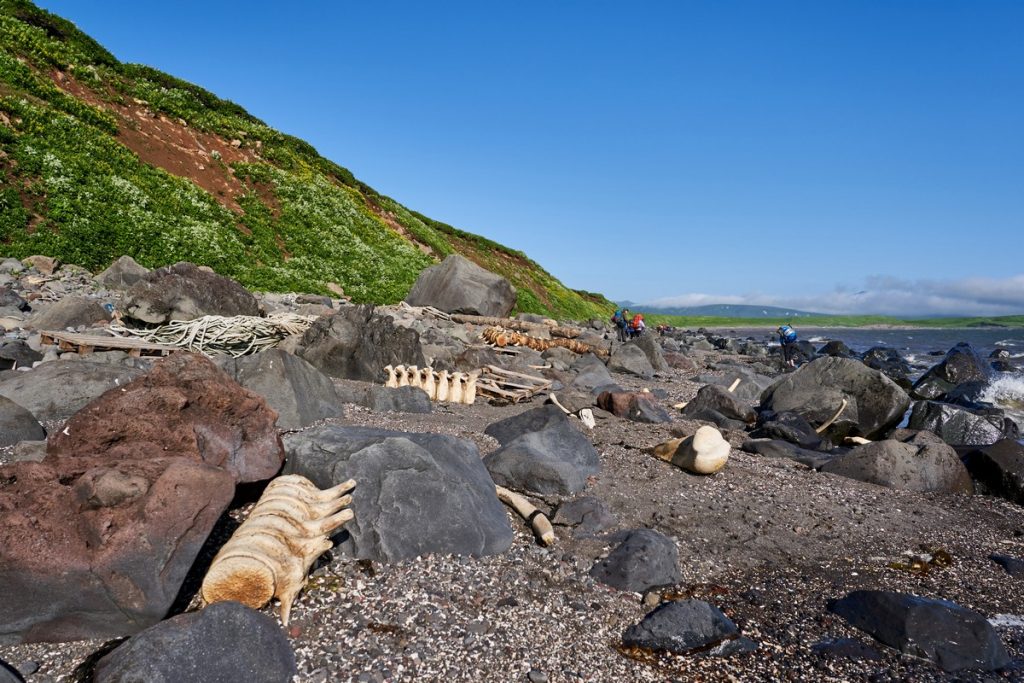 These are the remains of whales’ carcasses – a full three of them, if I calculated correctly (some were clearly quite ‘fresh’ (recently devoured by bears); others – almost ancient and falling to bits).

Beside the whale skeletons there was a whole load of man-made garbage washed ashore here too. As if all the ocean’s trash had been washed up in this particular spot. I wonder why? Is it a combination of typical winds and tides here?… 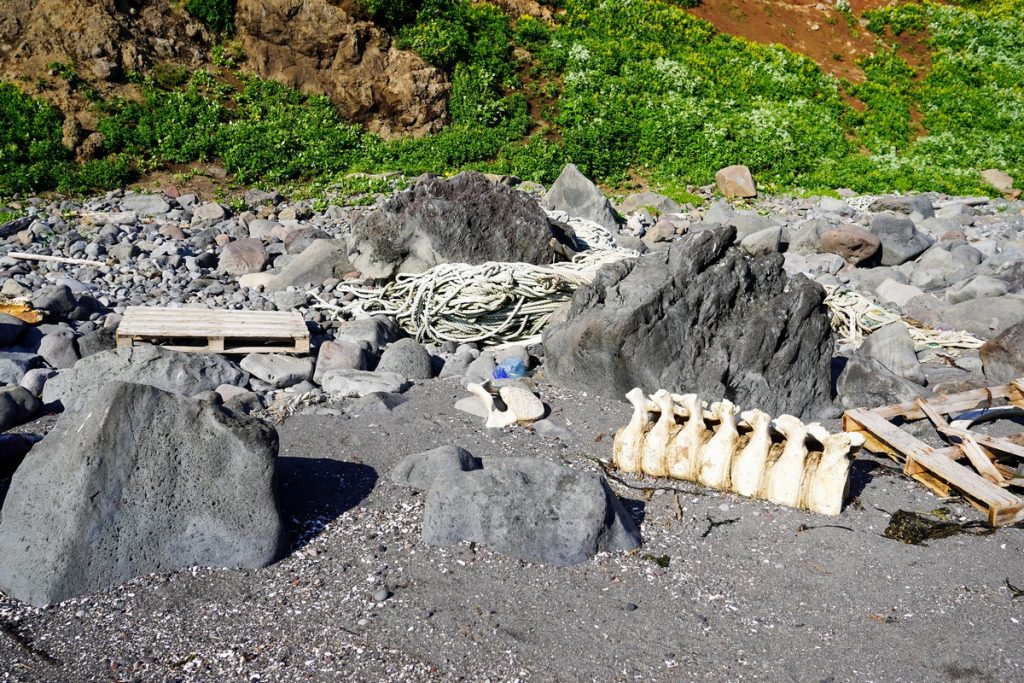 Clearly – judging by the massive footprints – there are plenty of bears here. Bizarre thing is – we saw just a handful throughout our whole beach-trek! Where were the others? Hibernating?! 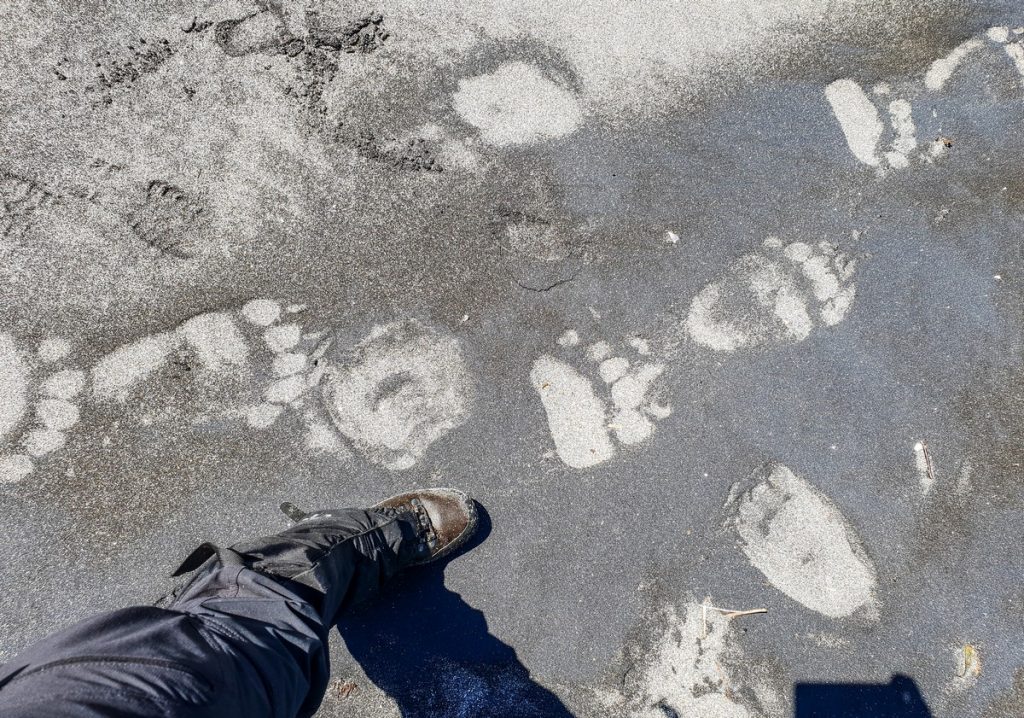 Here are four of that handful: Daddy Bear, Mummy Bear, Peppa bear and George Bear – chomping at the grass for their dessert after some main-course salmon from the rivers ).

Rivers flow, waves crash, the sun burns, bears graze… meanwhile we stomp along, with quite a way still to go…

Finally, we make it to our destination for the day – a lodge in an endless field just a little inland:

Next to the lodge, as if welcoming us: a (mercifully dozing) bear! 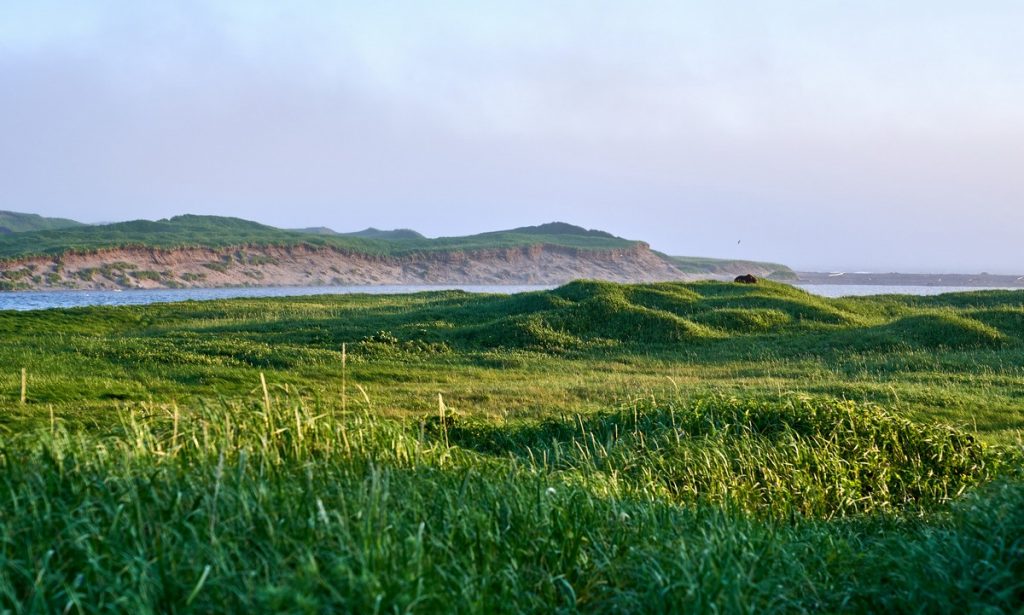 We covered many a mile for just one day of trekking with heavy backpacks. We’d set off that morning over there where the mist is coming in over the distant shore: 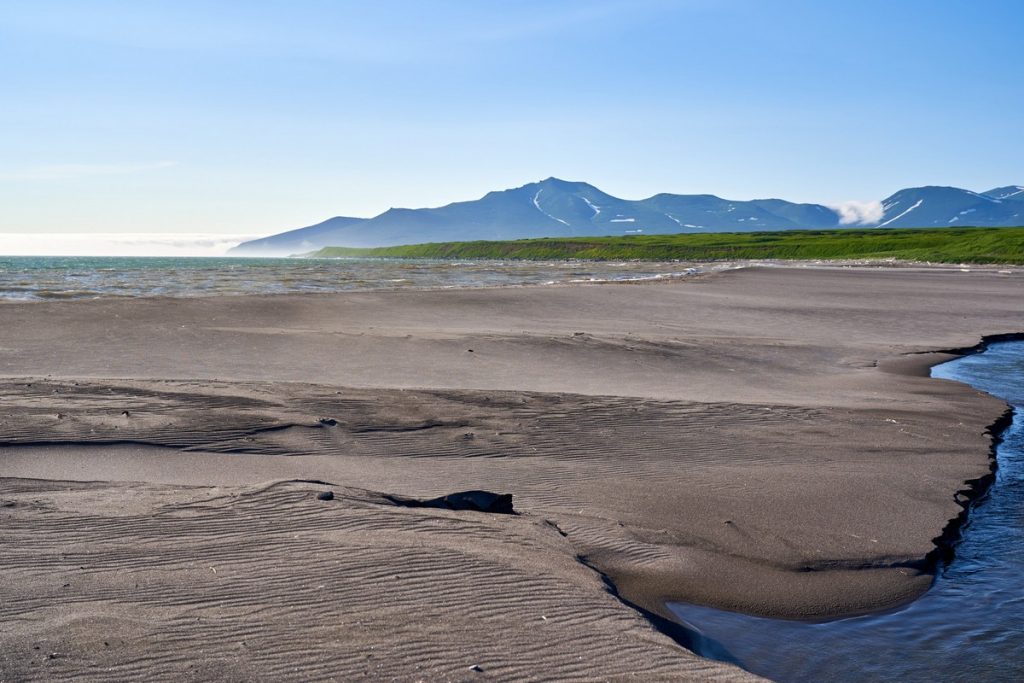 In all we covered some 15 kilometers – all in a southwestern direction along a crazy-beautiful Kamchatkan beach bordering the Sea of Okhostk with crazy beautiful surroundings all along it (from the Bondareva River to the Kambalnaya River):

What else can I say about this day?

Astonishingly, this day was the ONLY day of our expedition (the correct term, I believe; this was no mere trip or holiday:) when the sun shone from dawn till dusk! EVERY other day was overcast, gray and gloomy with just a little sun peeking through the clouds. In a word: grim (.

On this day we got to see two fine specimens of southern-Kamchatkan stratovolcanoes – Kambalny to the right, Koshelev to the left (which we’d descended down the previous day – more on that in a later post). 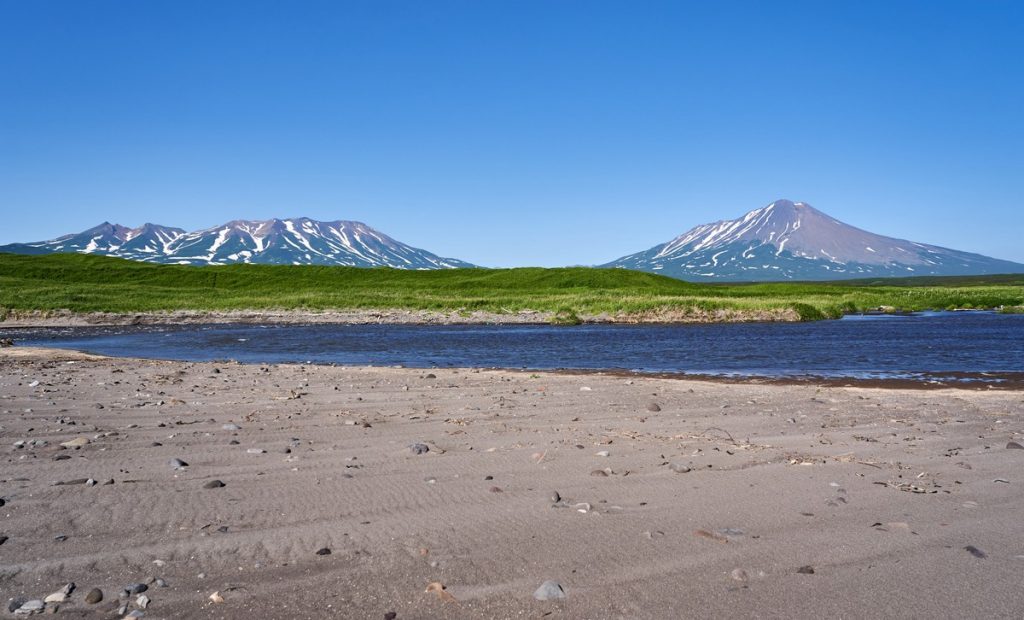 The following day we were headed in the direction of Kambalny Volcano and its lake. This here peak is the one we were planning on conquering. But more on that another day… 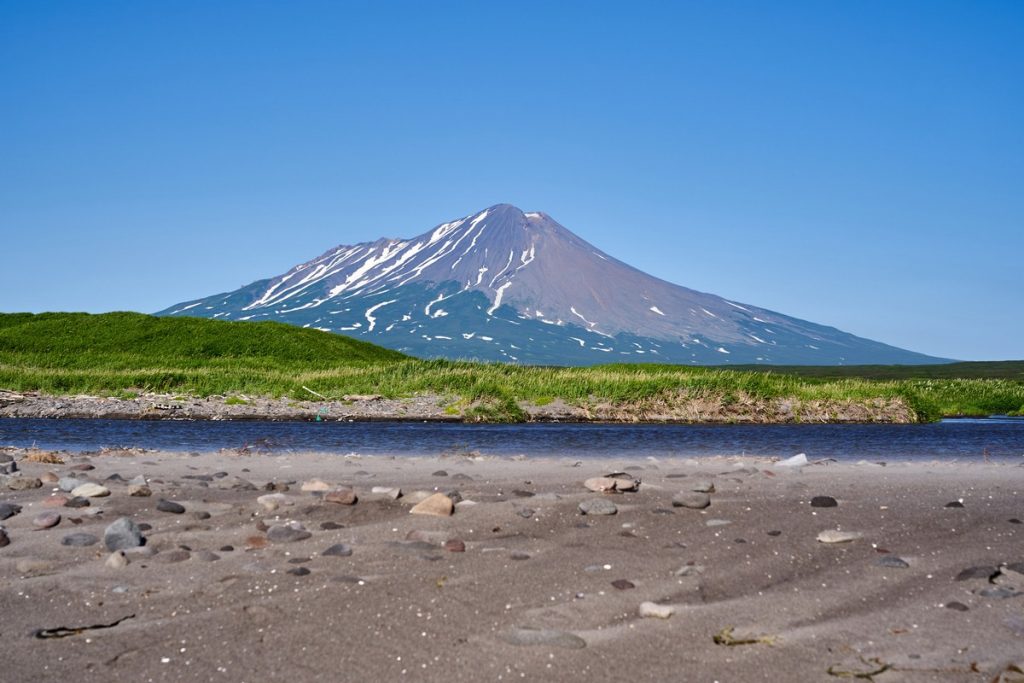 And that was it for beach-walking for us for this trip. Regrettable, yes; to be expected: yes. Did it put us off Kamchatka, even if just a bit? NO!…