There are many colored rock formations – especially red ones – around the world. The most famous are the red rocks of Utah and Arizona, and Uluru in Australia. Less famous are ones for example in different parts of China, like in Zhangye. But most of them become brightly colored only when there’s a low sun either at dawn or dusk – or when Photoshop is used for digital color boosting. On Kamchatka on the other hand there’s a place where red rocks glow brightly all day – not just in the mornings and evenings. That place is the volcano named Koshelev:

Wow. Orange, white, green… – scenes serene you could gawp at for hours…

So, why are these volcanic rocks all so orange? Actually, we never did find out. If there’s one thing Kamchatka isn’t it’s well-signposted with information boards for tourists. And anyway, we’re trekker-adventurers – not geologists ). But if there are some geologists among you, dear readers – do let the rest of us know down in the comments…

Meanwhile, my guess is that the reddiness-oranginess comes from the large quantities of iron in the biosphere here. The iron is emitted from the earth through volcanic activity, which by a natural process of ferrous oxidation and/or some other mysterious alchemy turns everything it touches copper colored! Put another way, there’s so much iron kicking about here even the rocks have rusted! Well, I’ve never known a rusted landscape look so ravishingly beautiful.

I can tell you from experience that practically all rock on more or less fresh volcanoes is of a reddish hue. It’s just that here the intensity of that color is off the chart…

Btw, even the water in the streams here is colored bright orange!

All righty: that was the portion of positivity. Next up – a few paragraphs of negativity and displeasure.

Such are some words of wisdom of the locals here. However, I have to protest regarding their accuracy, for this phrase doesn’t hold true of every season – for example the summer of 2018. For this period the phrase should have been:

“The climate is harsh in Kamchatka; the weather’s terrible too!”

On the day of our visit to Koshelev there were only very short periods of sunshine while the clouds parted about six times in total – each time we were clicking away on our cameras like paparazzi before the cloud closed up again. The rest of the time was murky and misty – sometimes to the extent that practically nothing could be seen at all.

But I shouldn’t grumble really. It could have been a lot worse; we could have been completely lost in a dense fog with visibility constantly around zero. Still, such a shame the sun wasn’t out on this day of all days.

Then there was all the snow this year that got in the way of all the oranginess of the Martian landscapes: another irritant!

Still, at least the panoramas up here were out-of-this-world amazing. At times they made up for the cloud, drizzle and cold ).

At least it was only the second and third days of our expedition: our legs were still fresh and we were full of energy. I think this helped us not get too upset by the poor climatic conditions doing their best to spoil things.

For dessert this day were the Upper Koshelev fumaroles and thermal glade in the Valentin crater. Hissing, steaming, bubbling, gurgling, burping – all a bit bizarre for the folks who were seeing this kind of thing for the first time. “It’s like the upper valve of mysterious underground volcanism”, one commented. I had to concur ).

Btw, this place is very rarely visited – by anyone. We saw it from afar back in 2015 from a distant peak. I wonder, have any tourists been here since then? Or has it been just us and the local bears that have roamed these slopes? Just curious…

Here’s the route of our Koshelev trek:

And as a bonus track for you patient readers who’ve read this far – a few pics of Koshelev in August 2015. See how different things are with the sun out – so much brighter and tastier?!…

The western peak of Koshelev, from the west: 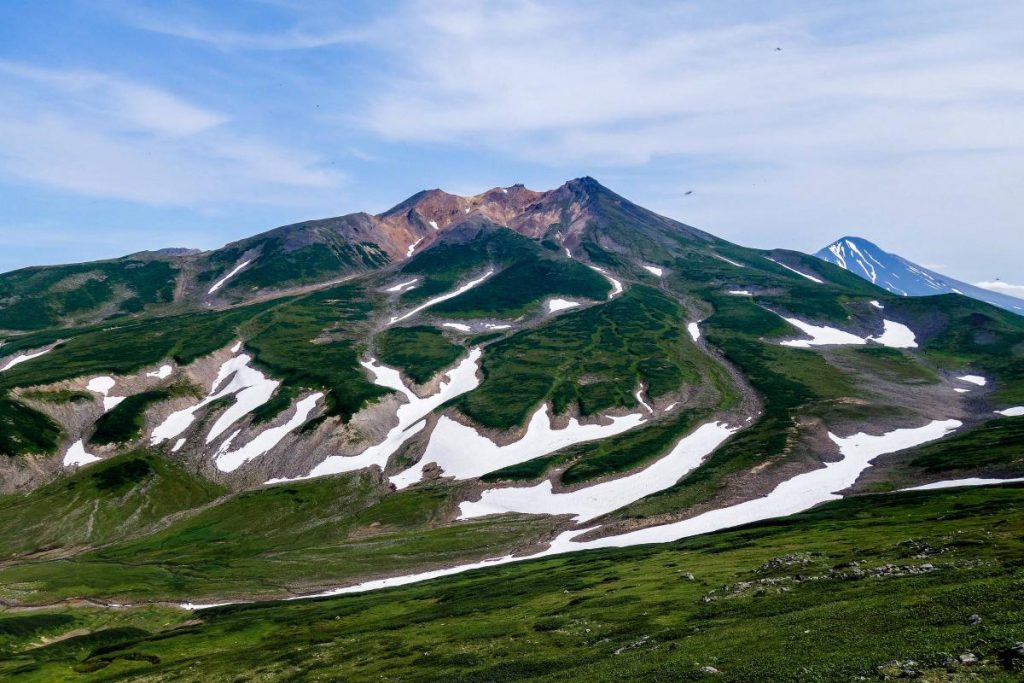 Sometimes we had to clamber across loose rocks like these; not the easiest of terrain: 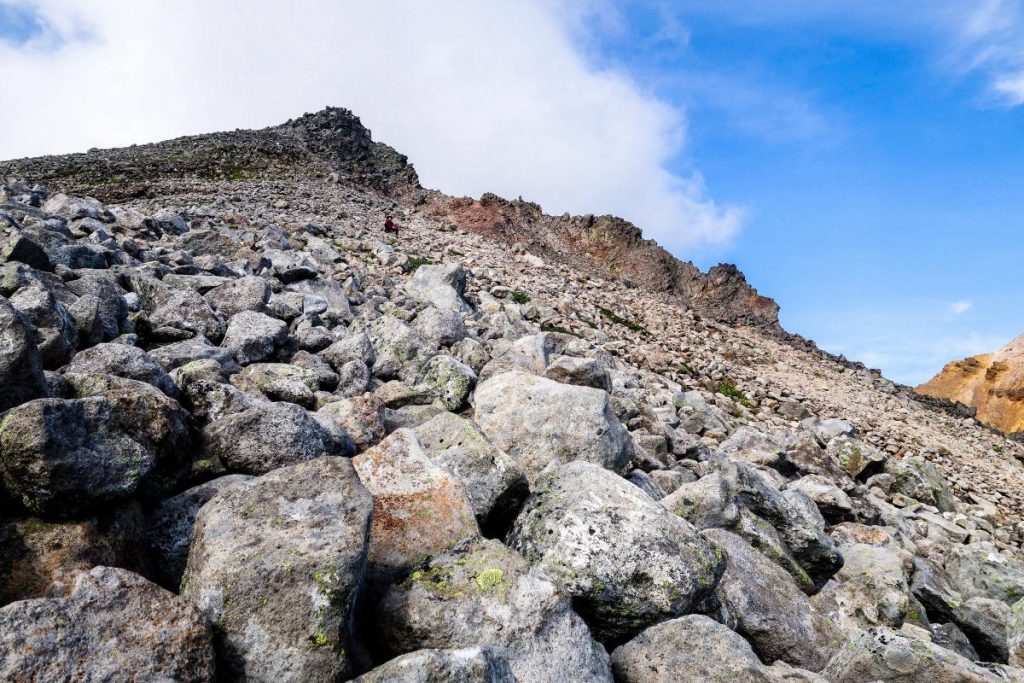 But clambering across them was worth it – for these here views at the top. But remember, these pics are from 2015. Alas, this year – no chance of such vistas.

All the photos from this year’s Kamchatka expedition are here.

That’s all for today folks; back with more Kamchatkan adventures tomorrow…