The below pics haven’t been doctored with Photoshop. Well, the colors were brightened just a little, but that’s not full-on Photoshopping really – more like putting Polaroid sunglasses on. Incidentally, such sunglasses are advised to be worn when looking at these here views in the flesh. Everything’s a little brighter, fuller, sharper and more contrasting. Like so: 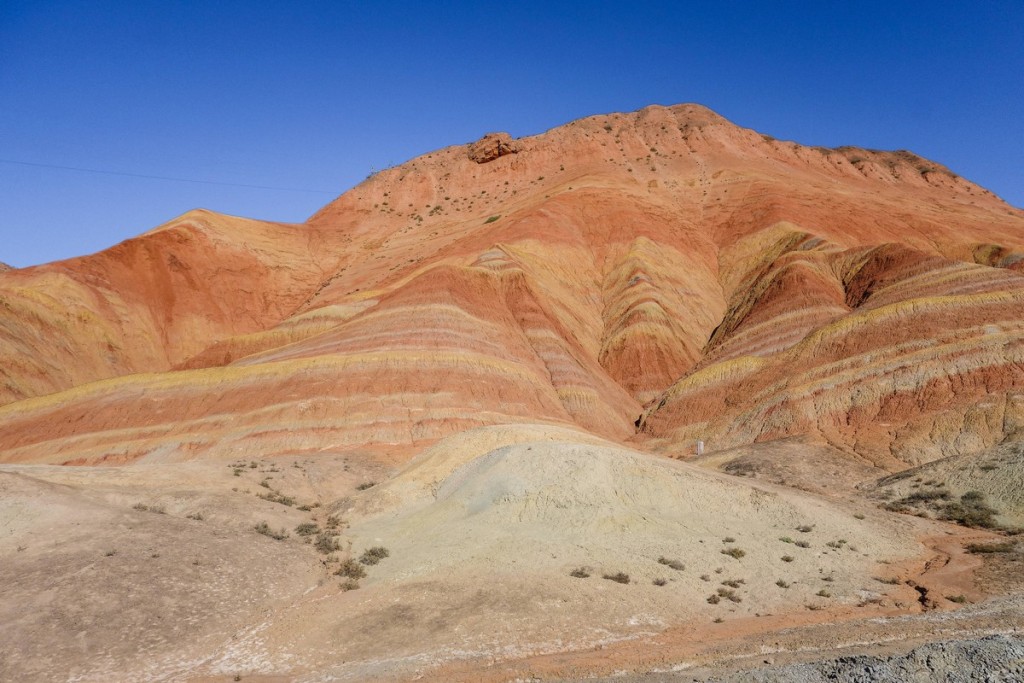 Amazing colored hills in Zhangye. This national park is not so popular, so not so many tourists. But hurry up, in a few years it will be flooded with people. And don't forget polarized sunglasses when you travel here! // Здесь взрывается мозг. Геологический парк Чжанье Данься в Китае. Для правильного просмотра ландшафта обязательны поляризационные очки #ekinchina #China 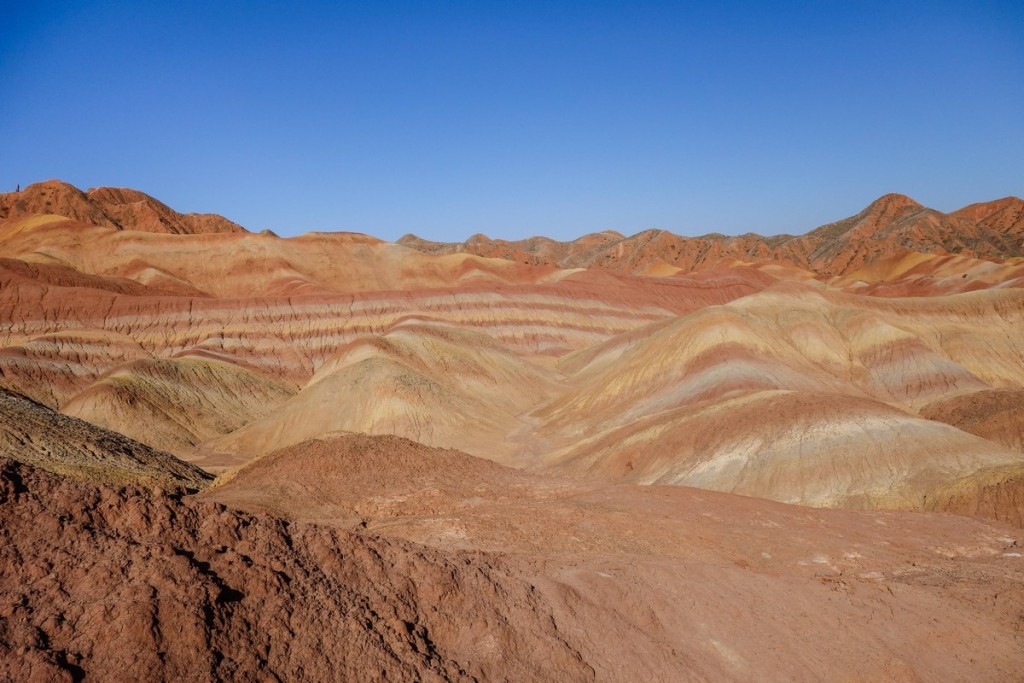 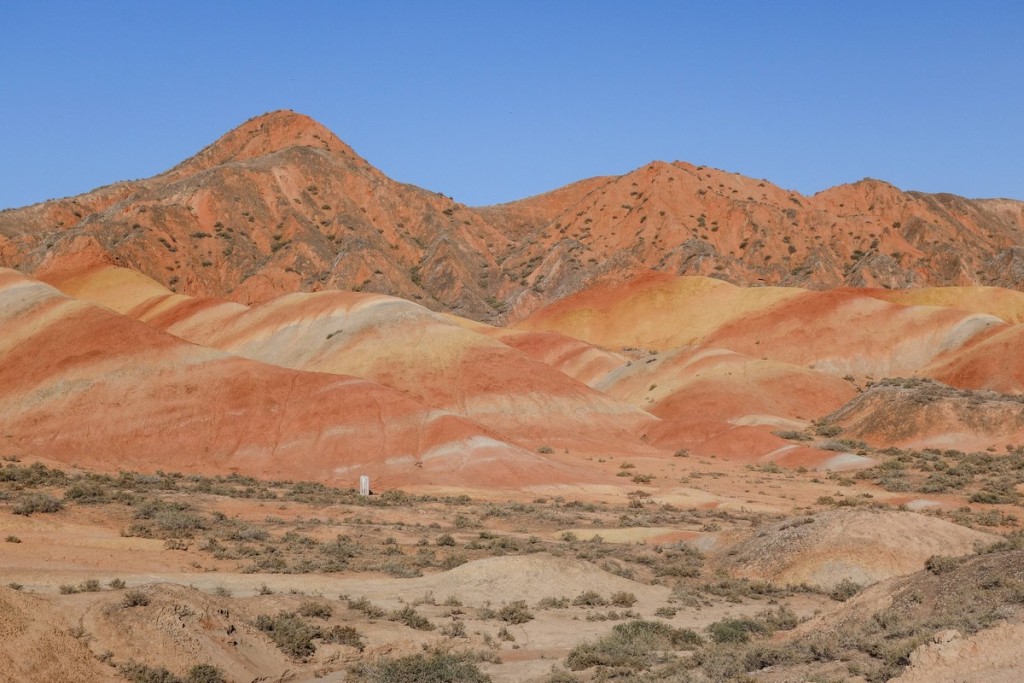 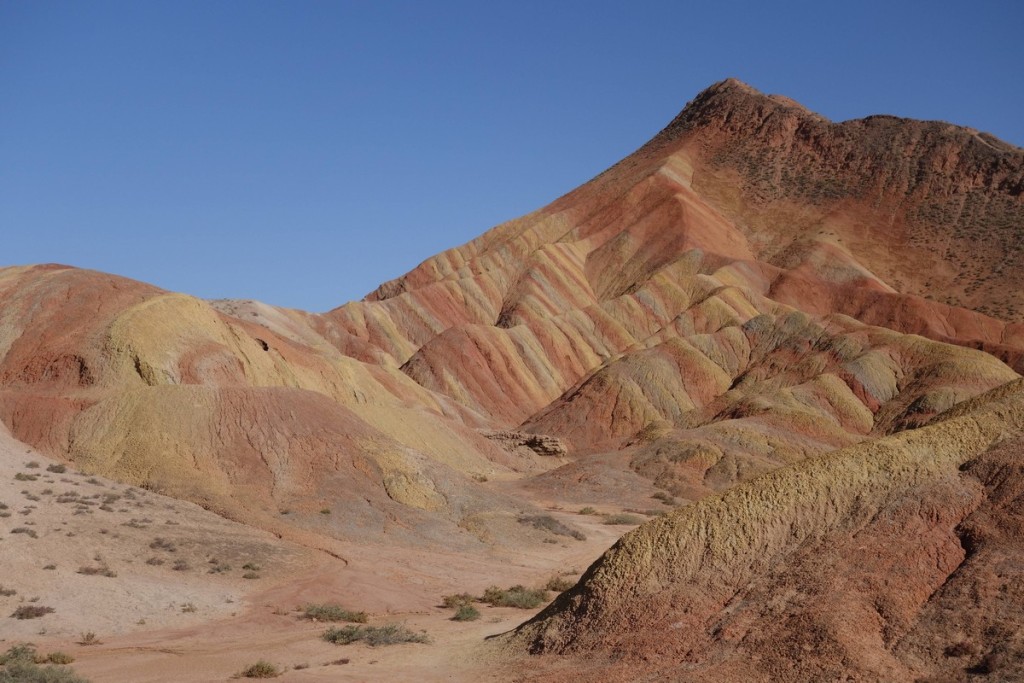 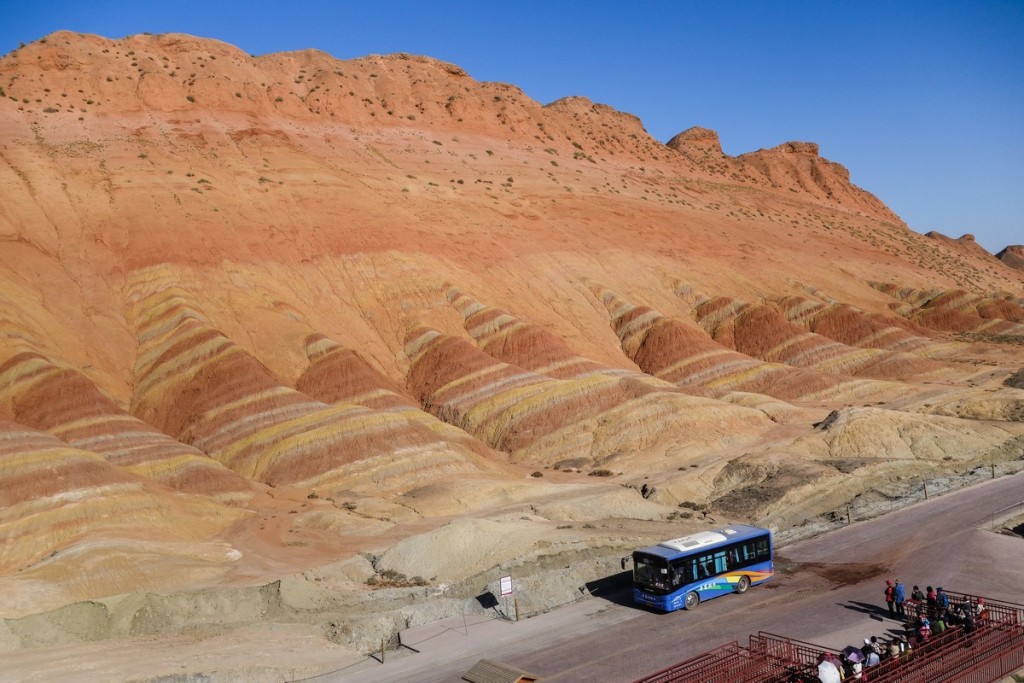 These pics are from the Zhangye Danxia National Geological Park. Much like Wulingyuan, this ‘park’ is gigantic. Just 18 months ago they started fitting it out with all the kit needed to withstand mass tourism – and the process is still ongoing: there’s construction taking place everywhere, meaning only four of the many zones are open. However, this is more than enough for a day of active photo-tourism…

The sights from viewing deck #1:

The sights from viewing deck #4:

From the parking lots to each of the viewing decks of each zone (and between them) it’s walking distance, but there’s also a bus that does a circuit round them all: not much good if you want to, say, get from zone 2 to 1 in a hurry – quicker on foot!

By day the landscapes are somewhat lackluster and hazy, as the bright sunlight kind of smudges everything (yes, I meant it when I said above that sunglasses are advised). But come the evening and the sunset… OMG: the mountains bloom into an array of sharply defined colors…

Though it doesn’t quite compare to dusk here, dawn is pretty awesome too:

As mentioned, there’s a lot of construction going on here. Looks like it’s going to be another Chinese tourist mecca when finished. Wikipedia says: “In 2014, 100 million yuan was invested to improve the facilities in the Binggou area.” From that I draw two conclusions: (i) volumes of tourists look set to rise; and (ii) much more of the park is going to be accessible in the future (many zones are now closed). In a year, I hope, this here hill should be open too: 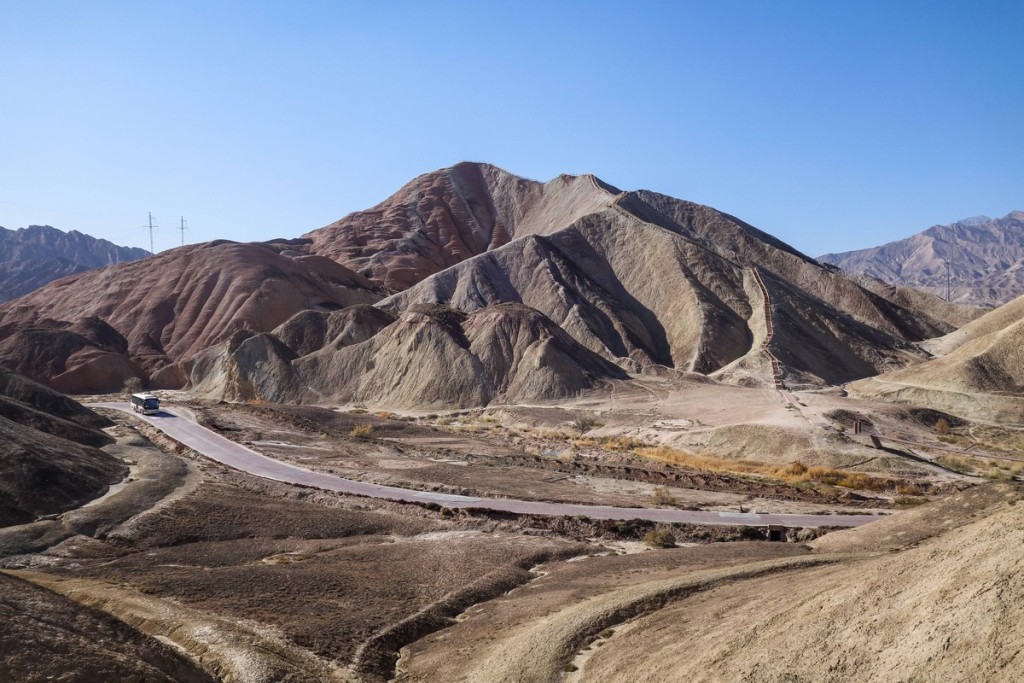 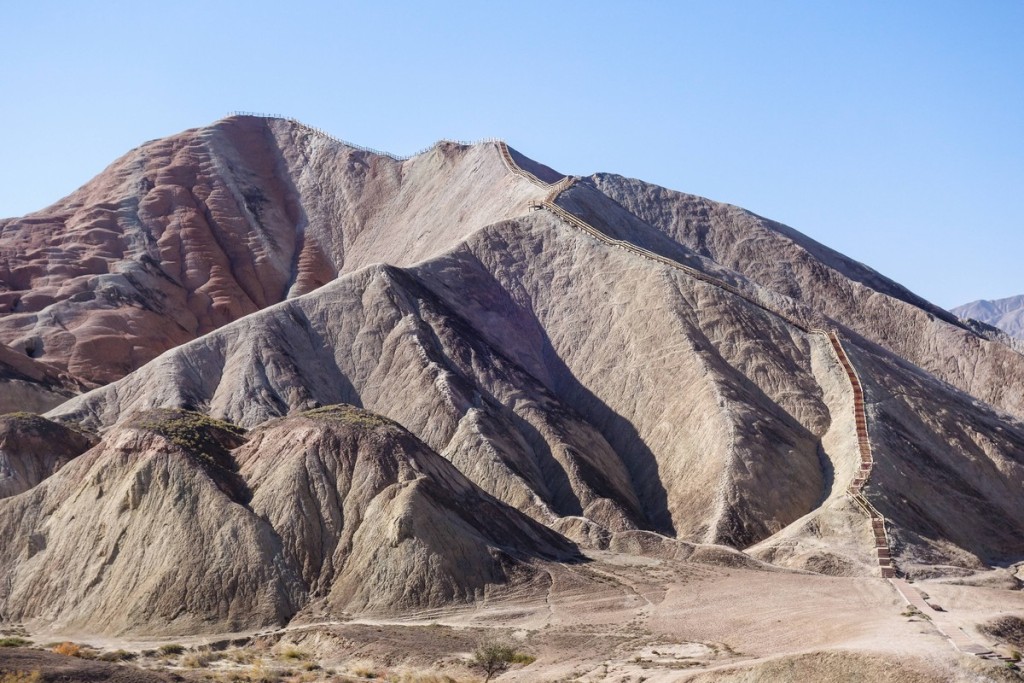 And now some nota bene for the more eager/impatient tourists.

If you are planning on making a visit to Zhangye, be sure to take plenty of warm clothes; especially if you intend to check out the daybreak vista – in the mornings it gets very cold. Places 1500m and higher have continental climate, and this is most notable at night and early in the morning.

Zhangye is situated on the 38th parallel north (about the same as San Francisco, the Azores, Sicily, Athens and Seoul). In October during the day it gets to around +20°С. But at 7-8am it can get down to zero. So wrap up! And that means woolly hat and gloves!

One word of warning: getting here ain’t easy.

There’s just one (!) plane a day to Zhangye from the province’s capital, Lanzhou, which also of course needs getting to. Or you could get there by rail or bus, or even get a Chinese driving license (international ones aren’t recognized!) and rent a car. In short – where there’s a will to get there, there’s a way to get there.

Zhangye Danxia National Park is very much a provincial backwater in a poor part of the country. Even the very best hotel in town was a bit of a dive. The only cars you see are very cheap ones, and they compete with another mode of wheeled transport on the roads: tractors! Along the roads there are rows of poplars. At the street markets you can find… dried tiger paws for sale – genuine ones with claws! (I was so taken aback by these that I forgot to take a snap of one.) Yes. This sure is provincial China. On the other hand, the airport – though modest – is new, the roads are smooth, and on the endless dry steppe stand hectares of solar panels… 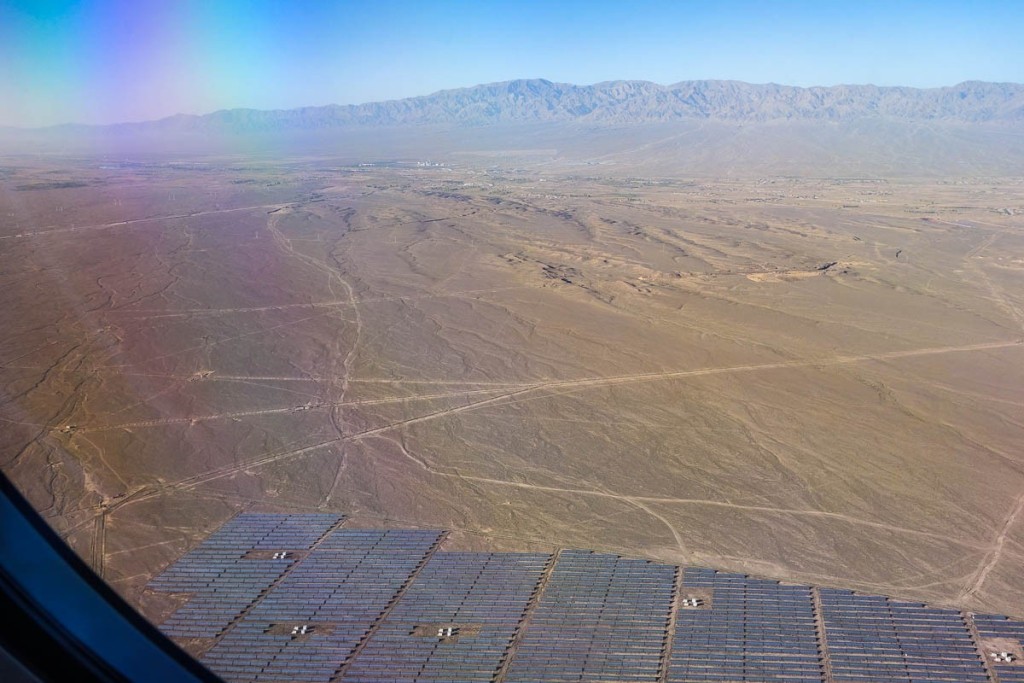 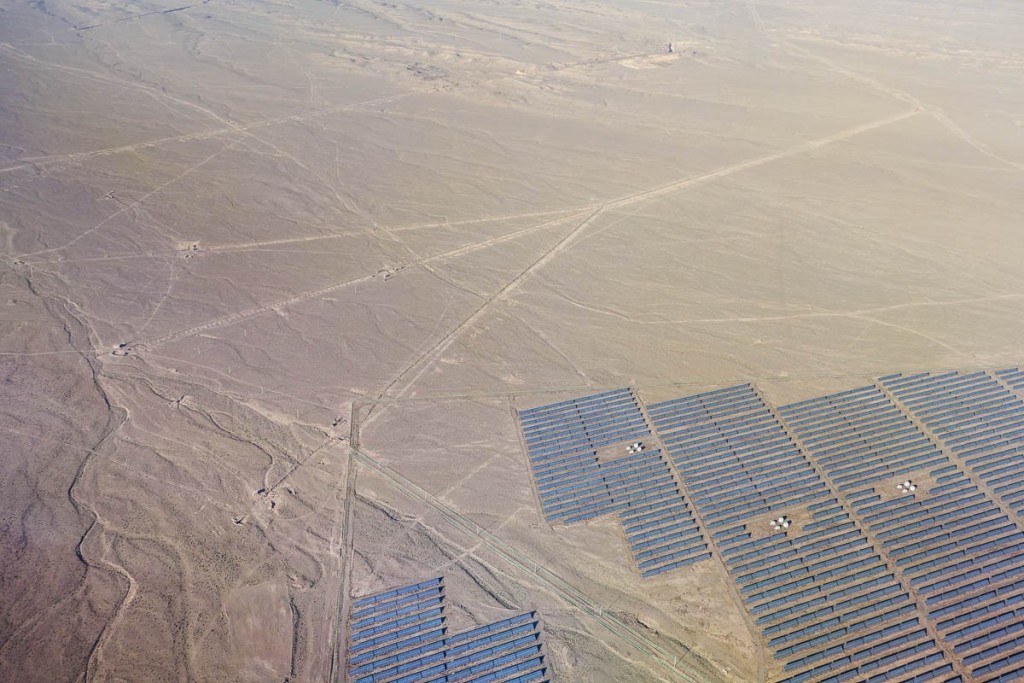 In a parking lot by the park, in among myriad fast food vans we came across a solar-powered… thing: some sort of device for cooking (exactly what it was cooks we couldn’t work out). First time I’ve seen one of these… 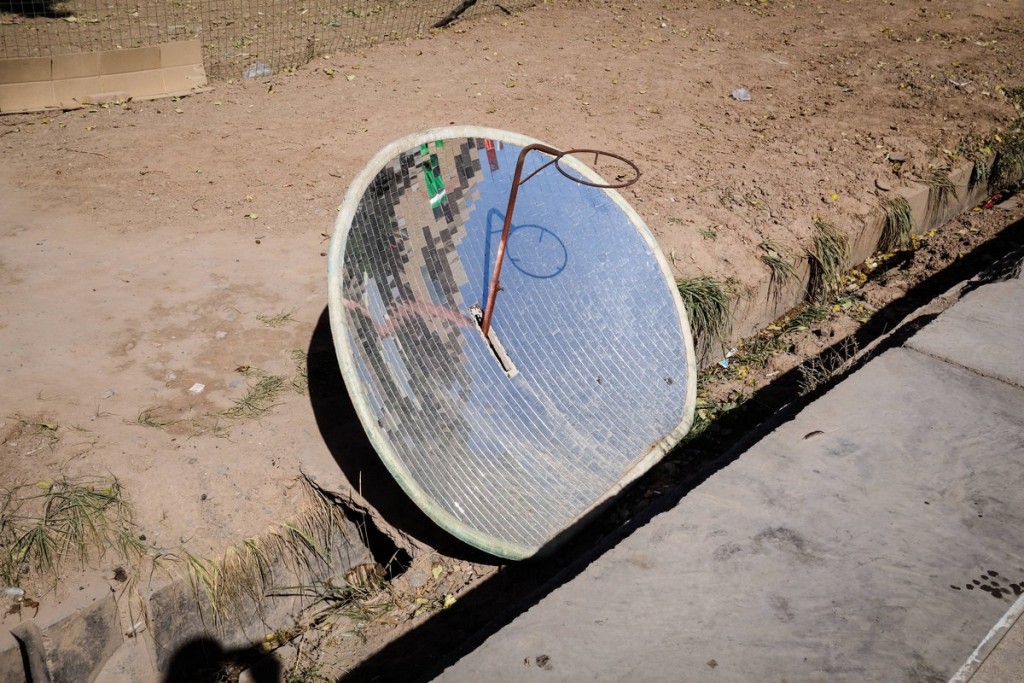 In summary, a very interesting place. If ever you’re in this neck of the Chinese woods, get on over here. Staying for more than a few days looks recommended: turns out the place has more touristic delights up its sleeve – mainly up in the mountains… 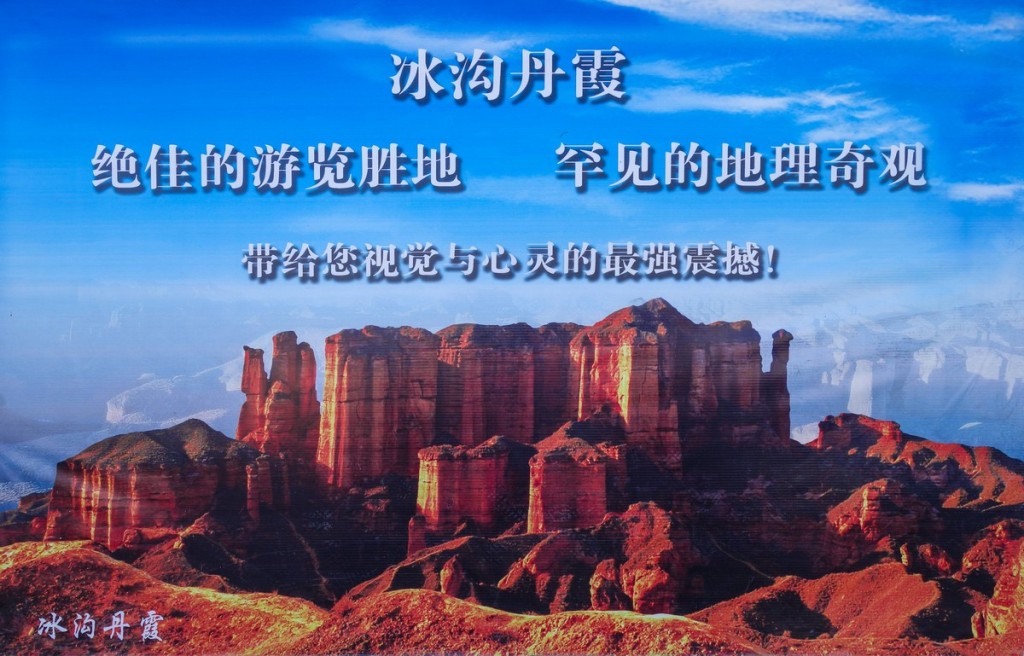 That’s all for today folks. Back tomorrow with more tales from the Chinese side…

All the photos from Zhangye Danxia are here.