Believe me – in China there’s plenty to look at. I gave myself  a present for my for 50th B-Day and spent a few days there recently. Get ready to say ‘wow!’ when you see some of the upcoming must-see spots!

As I’ve said before on these here cyberpages, the funny thing is – most of that ‘plenty‘ is practically unknown to non-Chinese folks. The conspicuous historical monuments that were lucky enough to have survived the Cultural Revolution are known about, like those in Beijing and around, like the Great Wall of China, Lhasa and plenty more. But there’s a lot more besides, most of it unheard of outside the country. Just ask around – you’ll be met with blank stares. Maybe a few folks know about, say, Mount Kailash but that will be about it!

Oops. Yes, I’m certain I’m repeating myself somewhat here. I’ve already bemoaned this state of affairs not long ago. Accordingly, without more of ado, let me get on with another bit of Unknown China!…

Today’s bit of Unknown China shouldn’t be referred to as a mere bit. For it could well be one of the Top-20 most beautiful places in the world. It’s Wulingyuan – a ‘scenic are that comprises several national parks, one of which is the Zhangjiajie National Forest Park‘.

From somewhere out of sight waaaaay down below rise up huge rock columns. Jagged, naked sheer sides, with green vegetation on top. Utterly mind-blowing and jaw-dropping, moreover – in any weather: can’t say that for many similar natural installations, especially those in Kamchatka.

In overcast murkiness these stone columns get wrapped in a white fog. The actual scale and distances involved get totally lost, with the brain just giving up attempting to gauge them. They can’t be viewed with the rational mind; only with emotions. Then all of a sudden the sun will come out and the scene is transformed: all the detail and colors come to the fore, but still the brain isn’t able to cognize! Check out these contrasts in some of the pics below…

The heights of these columns are just silly: hundreds of meters tall they are. This one in the next pic is a whopping 1080 meters tall – more than a kilometer! Incidentally, it’s called Avatar Hallelujah Mountain, but more about that later. And the stone arch in the pics – that’s also daft-high: around 1000 meters up. You can walk across it too, if you’re brave enough. 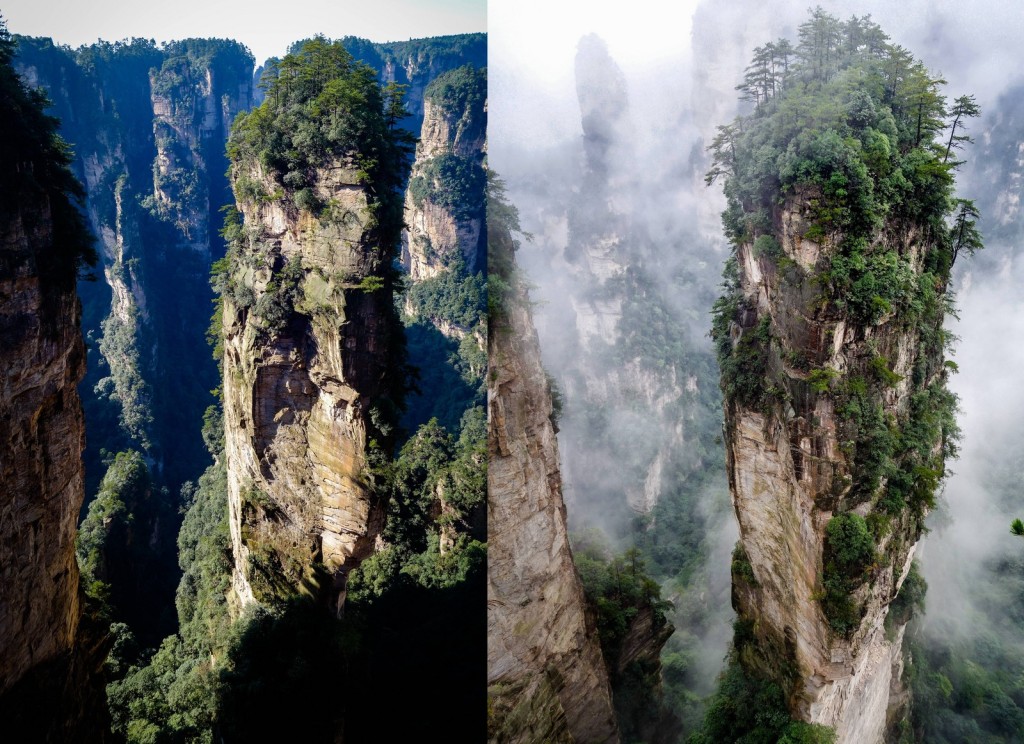 Mind-blowing, I’m sure you’ll agree. And it doesn’t matter if you look at them from the top or bottom – the effect’s the same: staggering.

I hear there is a third ‘mode’ for seeing these dizzying rock columns: when cloud lies deep in the valleys, while up above them – you guessed it: silly sunny! The effect from up above is the rock stacks looking as if they’re floating on the clouds! Alas, I didn’t see such a spectacle this time; saved for next time…

Now, back to ‘Avatar’. Turns out these towering columns so impressed James Cameron that not long after he returned from a trip to see them… yep… out came the blockbuster <a href=”https://en.wikipedia.org/wiki/Avatar_(2009_film)” target=”_blank” rel=”nofollow”Avatar. Coincidence? ;) 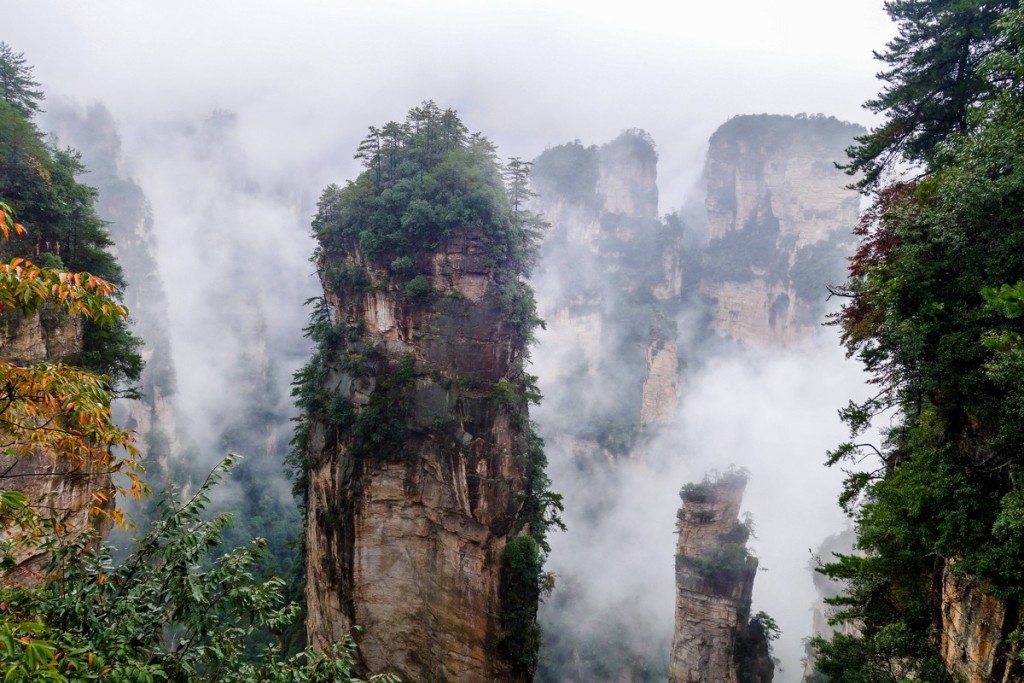 Avatar wasn’t shot here, but Cameron’s pics of the place sure did inspire the film’s set. Don’t believe me? Not to worry: the Chinese point out which particular columns inspired the particular parts of the movie set! 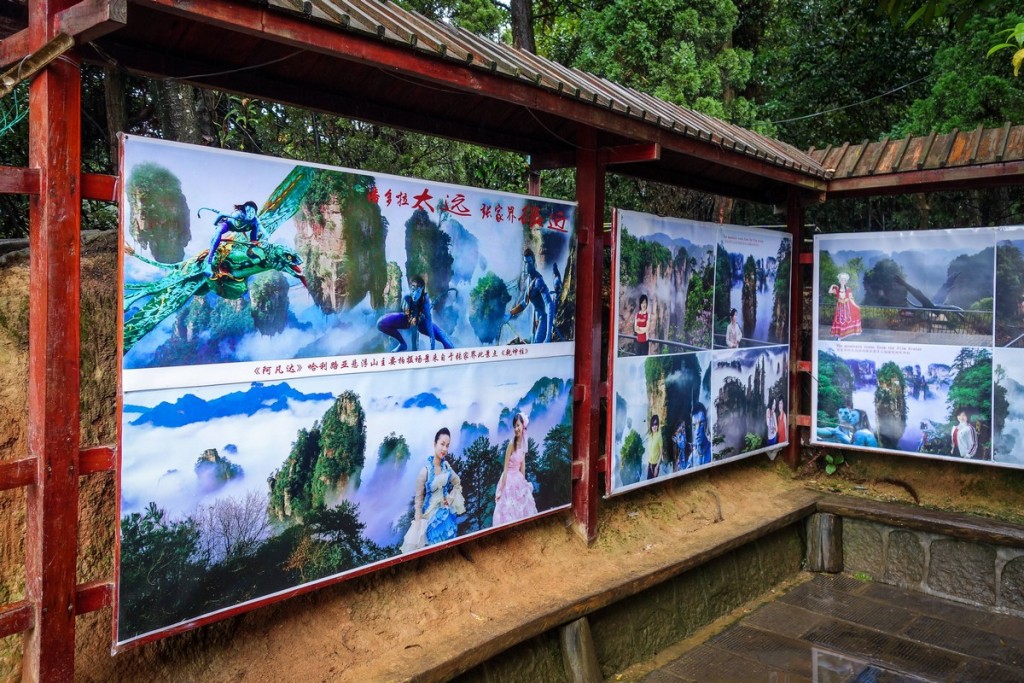 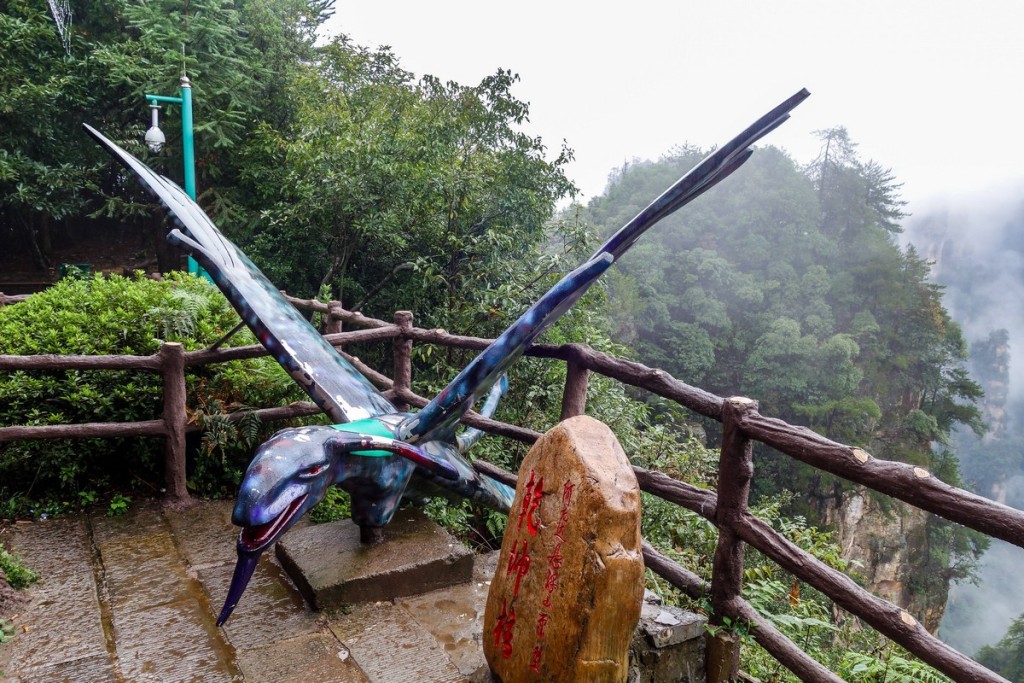 The ‘park’ is truly MASSIVE (369km² according to Wikipedia and local sources). In all there are something like 3000 stone columns of different shapes and sizes, but things only get mega interesting when they’re more than a few hundred meters high. You could walk for hours days weeks forever here. In fact, you might just end up doing so – if you don’t know Chinese (the signs aren’t all fully/well translated into English). But to see all the main awesomeness here, a good three days should be enough. While if you want to check out all three of the above-mentioned climatic flavors of the columns, then you’d need probably a whole week.

On the following map, the green boxes are the areas we checked out (in one and a half days); the red boxes – what we didn’t have time for: 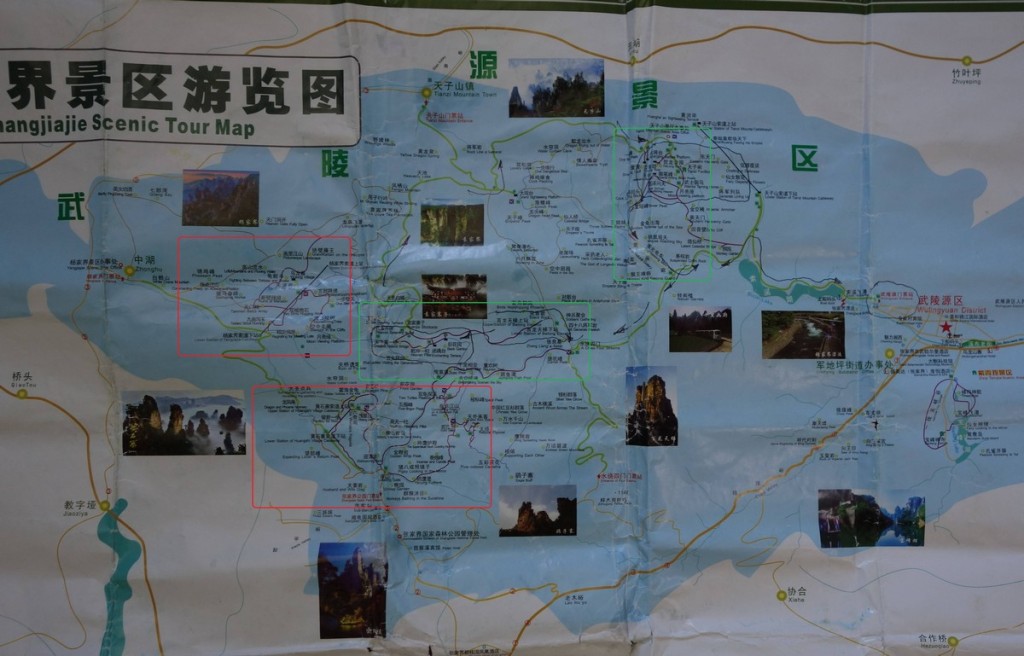 As mentioned, the in-English detail of the maps and signs is very sketchy:

One thing to be prepared for here: hordes of Chinese tourists in the very best spots – even in low season (shudder to think what it’s like here in summer and/or on Chinese public holidays). Indeed, this is a feature of practically all popular domestic tourist attractions in the country. But I guess it’s only natural with China having the largest population in the world.

Still, at least measures have been taken to cope with such ‘industrial tourism’ (I mean properly signposted, pathed, stepped, bathroomed, caféd and memorabilia-shopped:), and this park is no exception. Incidentally, the only downside: all sorts of garbage dropped down the crevices between the columns. Shame.

Buses travel all over the park to help you cover the vast distances, and to get to the very highest points there are funiculars, and even a lift.

And should walking up steps all day not be your thing, there are man-powered carriages available. For a small fee you can be ferried all over. I say small fee, but I did overhear some heated haggling going on at one point. 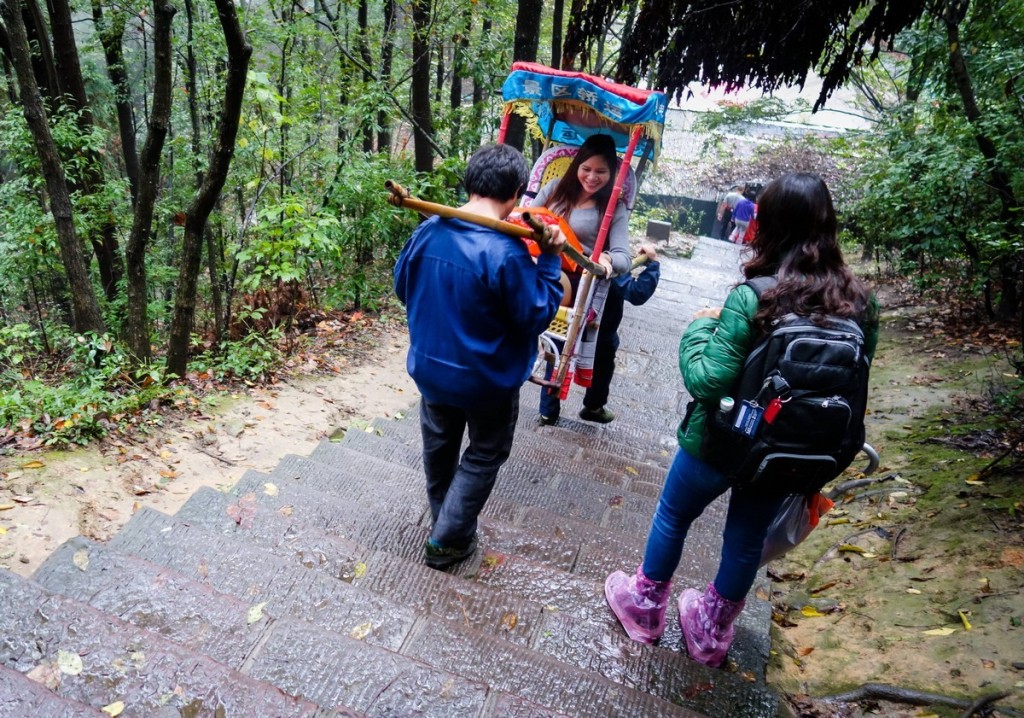 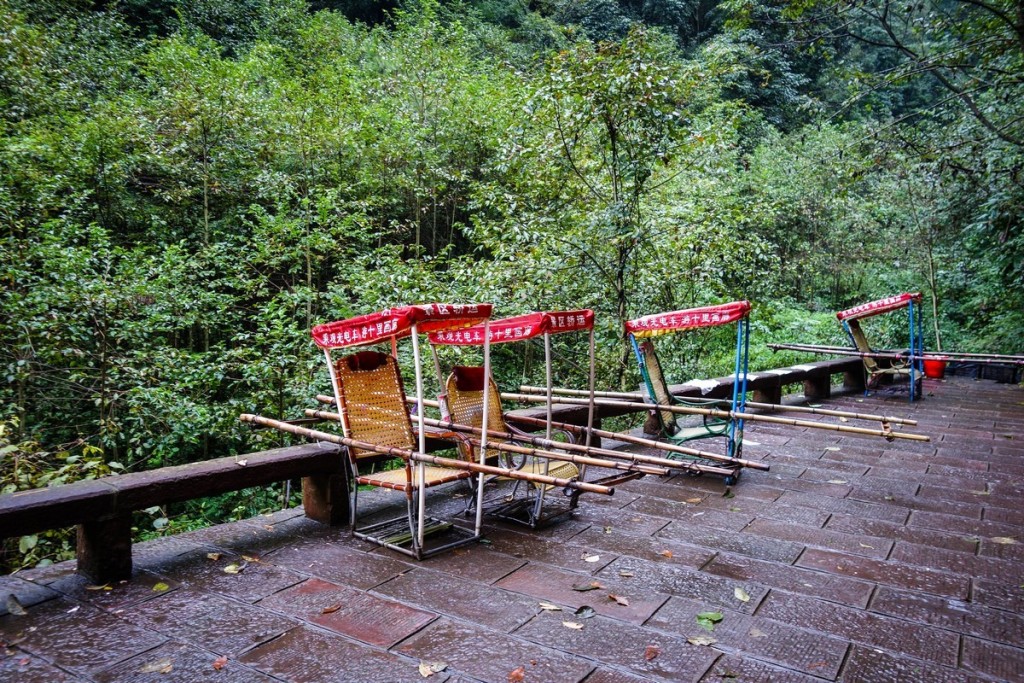 This place – I heartily recommend it for a visit when you’re next in southeastern China. A photographic shock is guaranteed. Every click of a camera or smartphone here guarantees a masterpiece.

Just be prepared for some aching legs: not everywhere is smooth-paved, so a good bit of stamina is needed if you want to see the best bits from different angles.

What else? Ah yes. The weather. A roasting sun and a constant fine drizzle. I could tell it could get wet on the first day when I saw this specially adapted contraption: 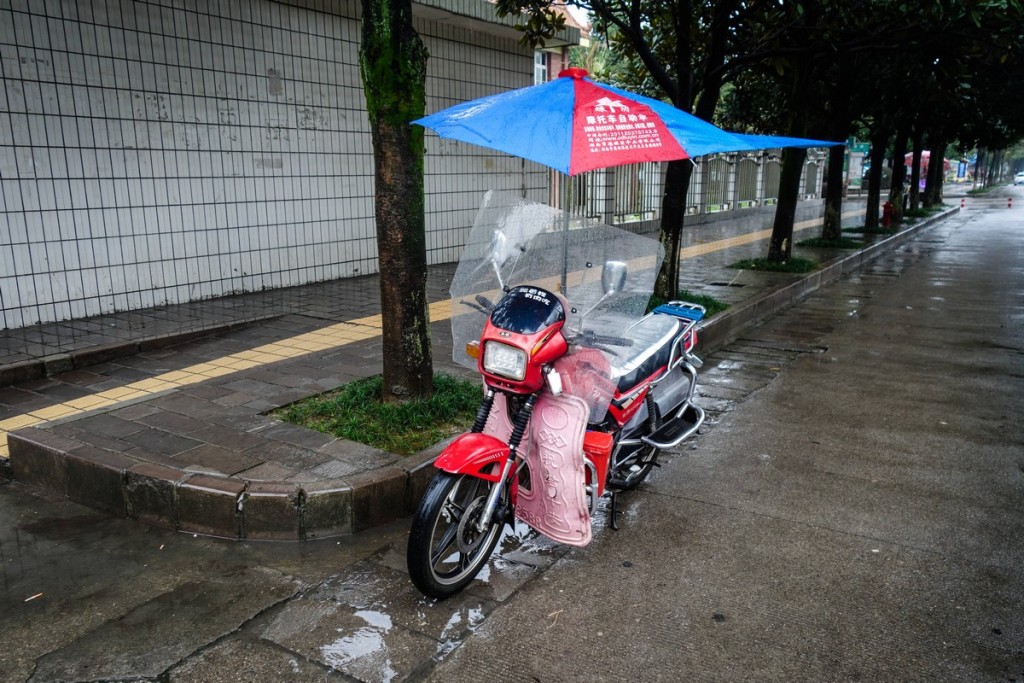 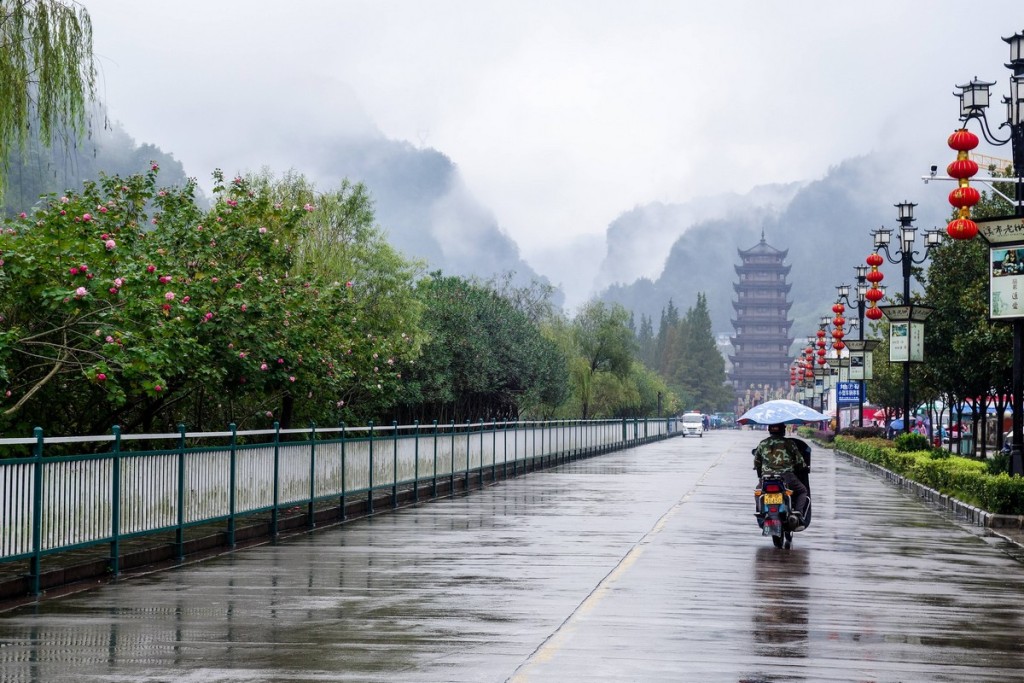 PS: how to get there and where to stay?

Basically, you won’t have a problem. There are loads of places to stay at and they’re all spanking new. 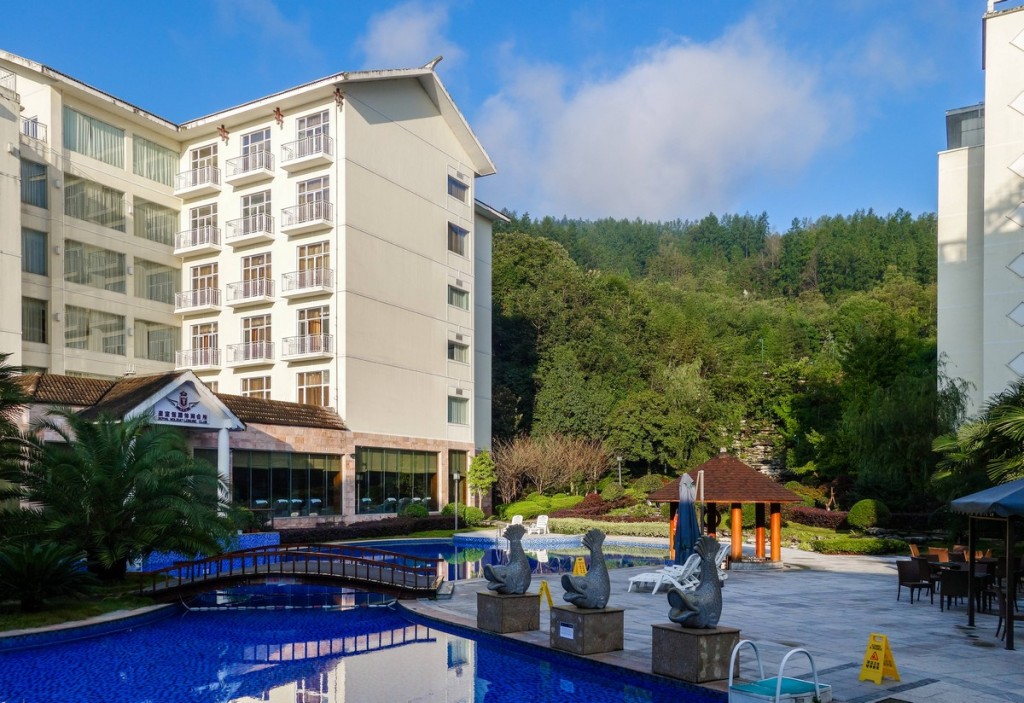 Getting to the park is also easy. It’s approximately 30-40 minutes from the airport to the town of Zhangjiajie (capital of the local district), and to the airport each day fly 20+ flights from all over China (and for some reason also South Korea). I counted two flights from Beijing, 4-6 (depending on the day of the week) from Shanghai, one a day from Guangzhou… and so on. Btw, the local airport – totally new, of a decent size, and clearly designed for plenty of passengers passing through it: 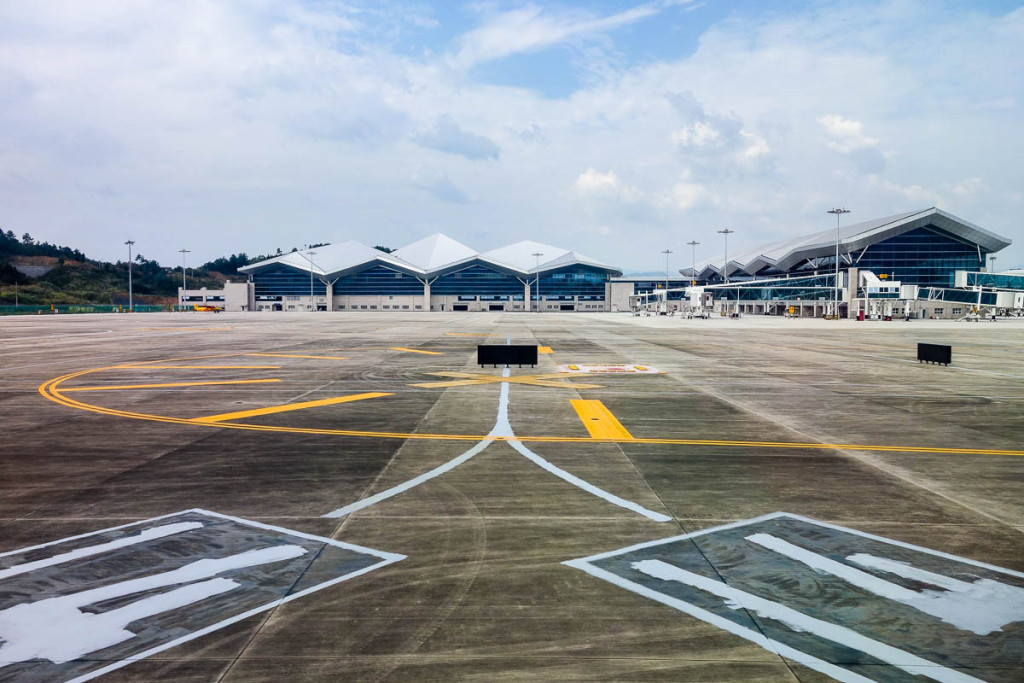 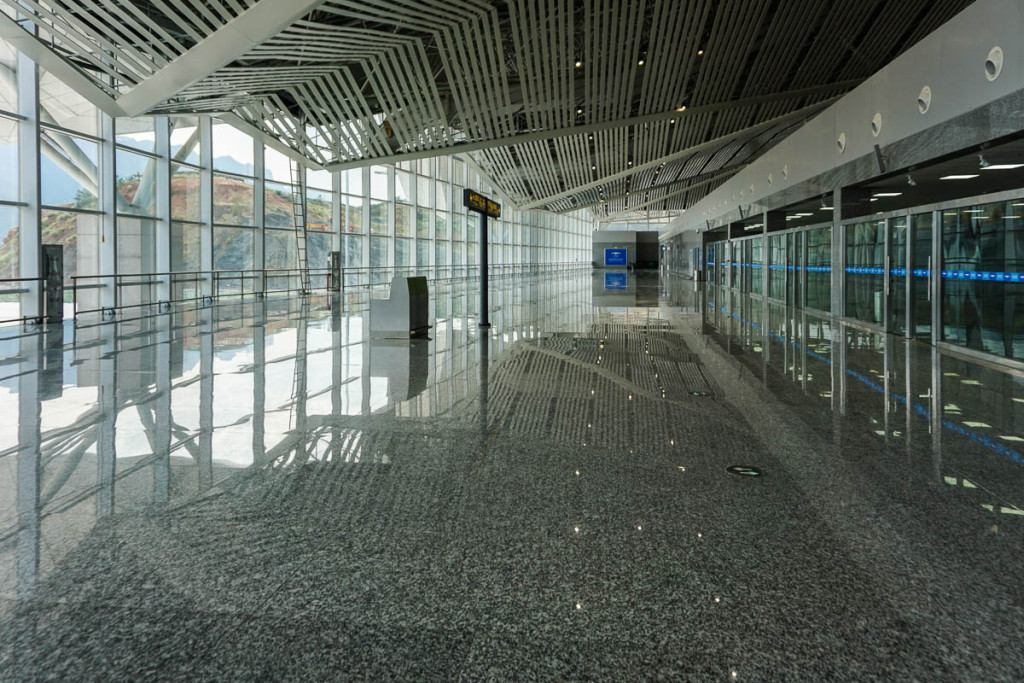 Woah! What’s that hole in the mountain? 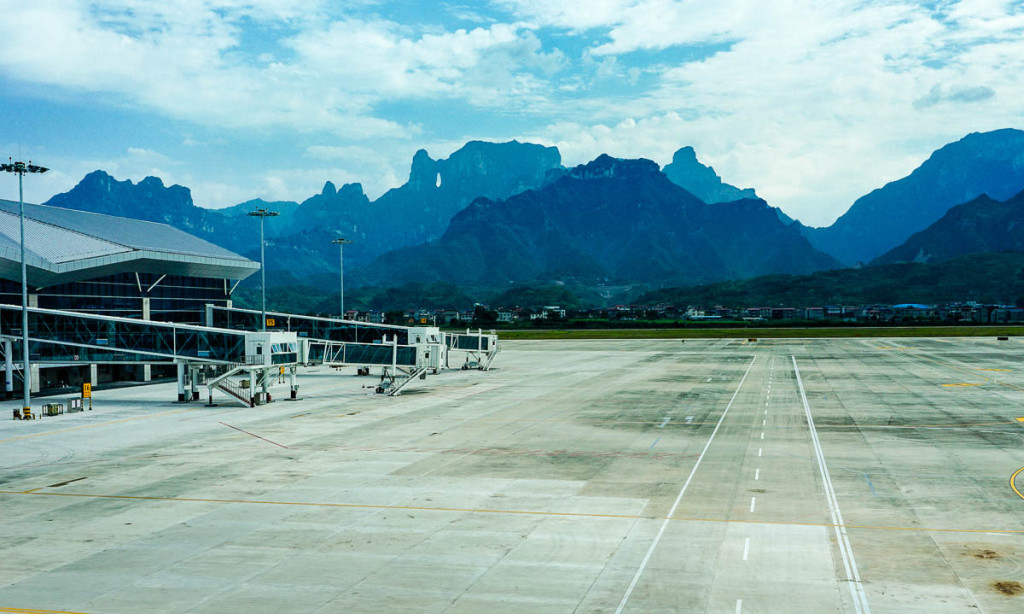 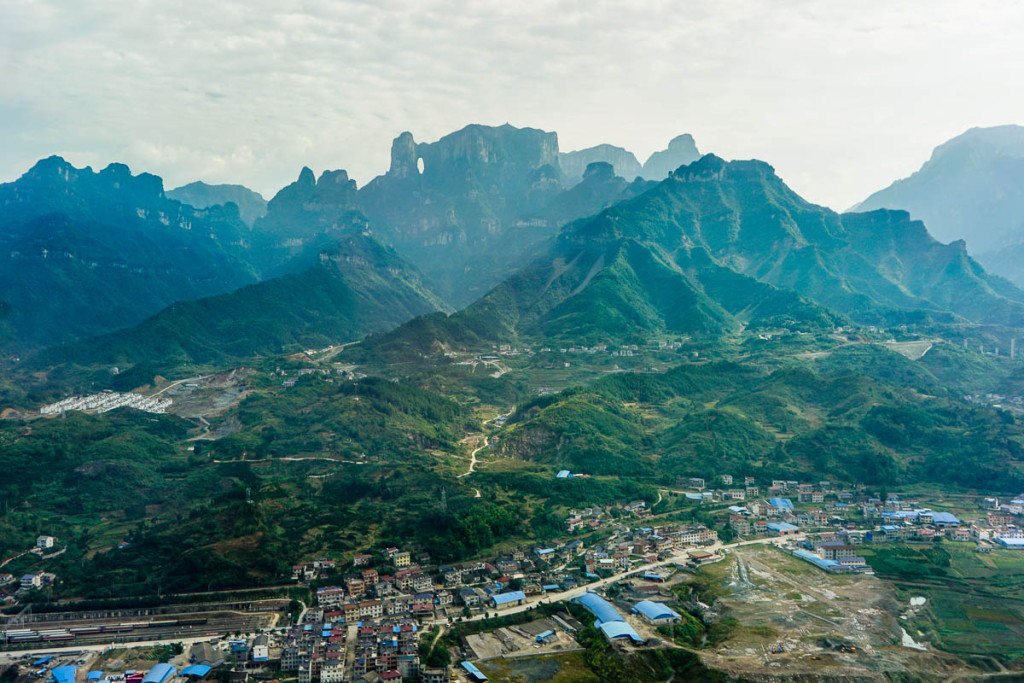 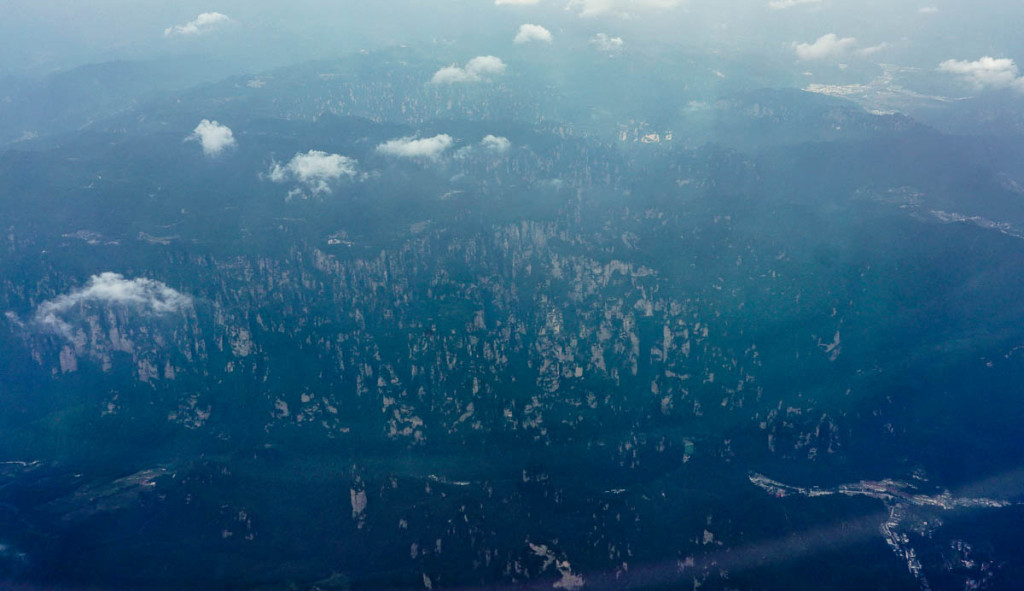 All the photos from Wulingyuan are here.