China is a fascinating country, and I’d say also a mostly untapped country in terms of tourism for the average non-Chinese: it’s full of world-class tourist attractions, but most outside the country have never heard of them, let alone visited them. Oh, of course, it’s also a huge country, so it can be visited time and time again, and there’ll always be something still left for you to see and marvel at. Nice.

I’m sure I’ve mentioned before on these here cyber-pages that the Chinese tend to ‘stew in their own juices’. By that I mean their domestic tourism industry doesn’t orientate itself to foreigners much at all. Of course there are the obvious tourist traps here which are widely promoted abroad – like the Great Wall of China and the larger cities – but, ironically, those places don’t really need any promo – the whole world knows full well about them already; it’s the not-so obvious spots that could do with promoting. However, in the meantime, there’s a good upshot to this lopsided tourism situation: for a foreigner, the less obvious spots are all the more exciting to discover – as you’re normally the first person among your friends and colleagues, or maybe the whole city you live in (whole country?:), to have ever visited them. Well, with the exception of Austrian bikers.

I say that tourism isn’t geared towards foreigners. That doesn’t mean to say it isn’t well developed in other ways. I was pleasantly surprised to find out that all of the smaller, lesser-known-to-foreigners places in the country are classified into five categories and described in minute detail, here. The top category (four As, or five As, I didn’t quite work out) is full of must-see places, and I was pleasantly surprised once more to find out that there are more than 50 spots in the top category (AAAAA). That’s a lot of must-sees. Means only one thing: must get back here again and again.

On my recent trip to the Yunnan province I made a start in crossing off some of the places on the AAAAA list as visited. Well, got to start some time, and some where.

One of these was Shilin, aka, the Stone Forest, near Kunming (Shilin means literally ‘stone forest’). And thank you I Heart China. The place was simply awesome… 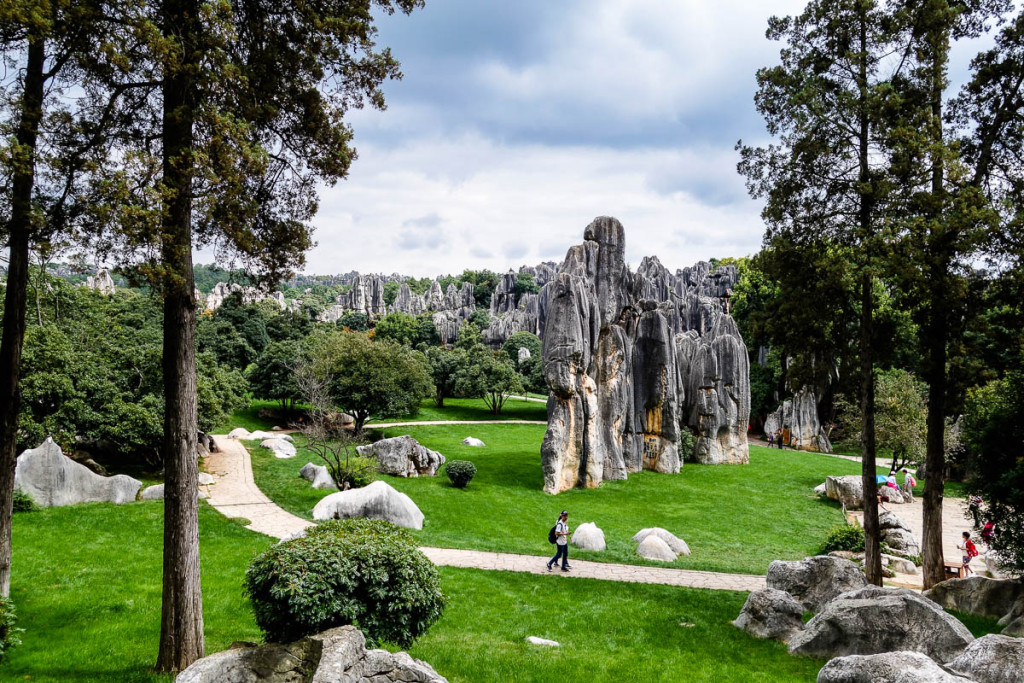 After falling in love Ashima was forbidden to marry her chosen suitor and instead turned into a stone in the forest. This is the legend behind #Shilin Stone Forest limestone formations, AAAAA class tourist site in #China #ekinchina

Ancient aqueous rocks pushed to the earth’s surface eons ago by tectonics, then more eons of rain, wind and earthquakes give us this superlative stony ‘forest’ today.

Labyrinths, crevices, chasms, caves, tunnels, arches – all by the hand of god!

The place reminded me a lot of Utah and the Lena Pillars, but things here were a little different. The colors are different, and it’s much smaller than the other two, but there’s an unmistakable eastern elegance and serenity to this site. You could stroll around it the whole day.

As you can see, the whole place has been kitted out with very neat stone paths and steps plus benches and tables. Much better than Utah or Lena…

Three hours are sufficient for a good overall look. But if you want to see every nook and cranny of the place I fear a whole day would be needed, maybe two.

We were there on a weekday and it was still quite crowded. Dread to think what it’s like on weekends or holidays!

There’s some unique cave here, but sadly we didn’t have time to check it out. As always: that’ll have to wait until the next visit.

All the Shilin, China photos are here.