When you climb up or descend down the very orange Koshelev volcano, it’s practically impossible to miss the white waterfalls. Which is just as well as missing these fine cascades of H2O would be most regrettable; for these are truly unique phenomena.

I mean, the water in these falls isn’t just seemingly white, much like waves coming in off the ocean (all the bubbles/froth). This water is actually really white – like milk! How so? Well, due to the local volcanism there’s an unusually high concentration of aluminum (and other similar natural elements) in the water here, not only making the water milky, but also leaving deposits of whiteness on the bedrock underneath and along the waterways. The milky water also seals up the walls of underground natural streams, forming tubes – along which water flows invisibly to the eye. And since here there are sharp changes in altitude, at the exits of the underground well springs it’s no mere bubble-fest, it’s a full-on whitewater splashing frenzy as it spurts out of the ground! Not quite geysers, but equally fascinating – and more unusual and unique.

I’ve never seen anything like this anywhere else in the world. I’d seen the phenomenon back in 2015, and wrote quite a bit about it then. Well here’s my update with pictures from this summer.

Here the bedrock is visibly coated with a white crust made up of a good few elements of the Mendeleev table:

This year the views of these natural wonders differed to those of 2015: this year there was a lot more snow; it was the end of July, but look at these huge blocks of the stuff:

Up above – a grim and gloomy sky: 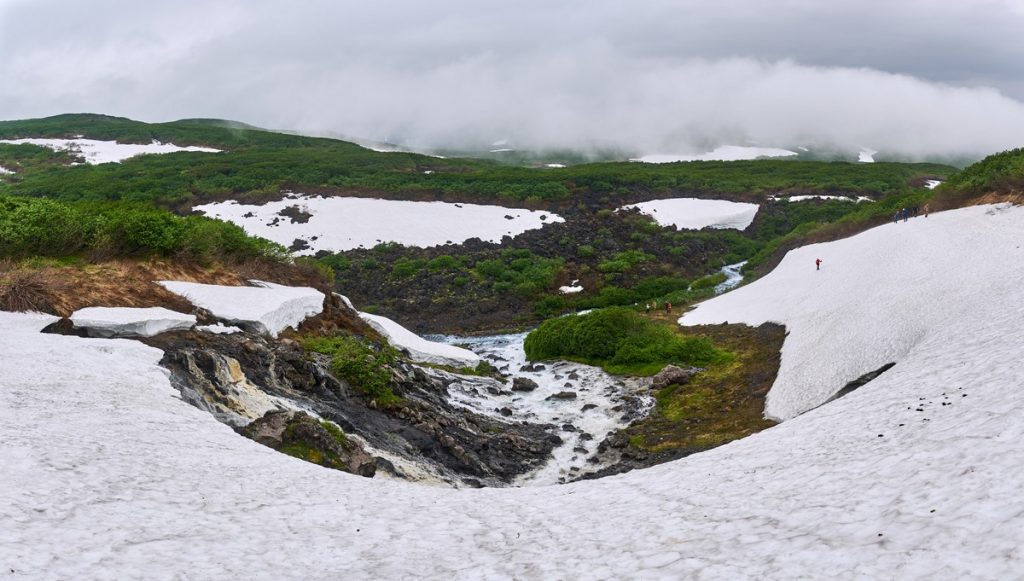 Back in 2015 we were told how the winter had been very snowy and the spring – drawn out, with the snow melting only in June. It was then when I first heard the wonderful phrase: ‘If it snows in June, there’ll be a late spring’!

Anyway, back in 2015 the snowfall was much heavier than usual. Where normally you would travel in 4x4s or all-terrain vehicles, that year snowmobiles or tracked (tank-like) vehicles were used. But… what does that then say about this year? Just have a look at the then-and-now pics to see what I mean (the 2015 pics were taken in the middle of August; the 2018 ones – the end of July):

Btw, the white waterfalls are situated around the 51st parallel north – as are Warsaw, Brussels, and Vancouver. Altitude about sea level: ~500 meters. You read that right: Warsaw, Brussels, Vancouver – but still masses of snow on the ground! Oddly, when the sun does shine – for a few minutes each day – it feels as hot as it is now, say, in southern Spain. The snow rapidly starts to melt at these times, but not long enough to melt the snow fully. 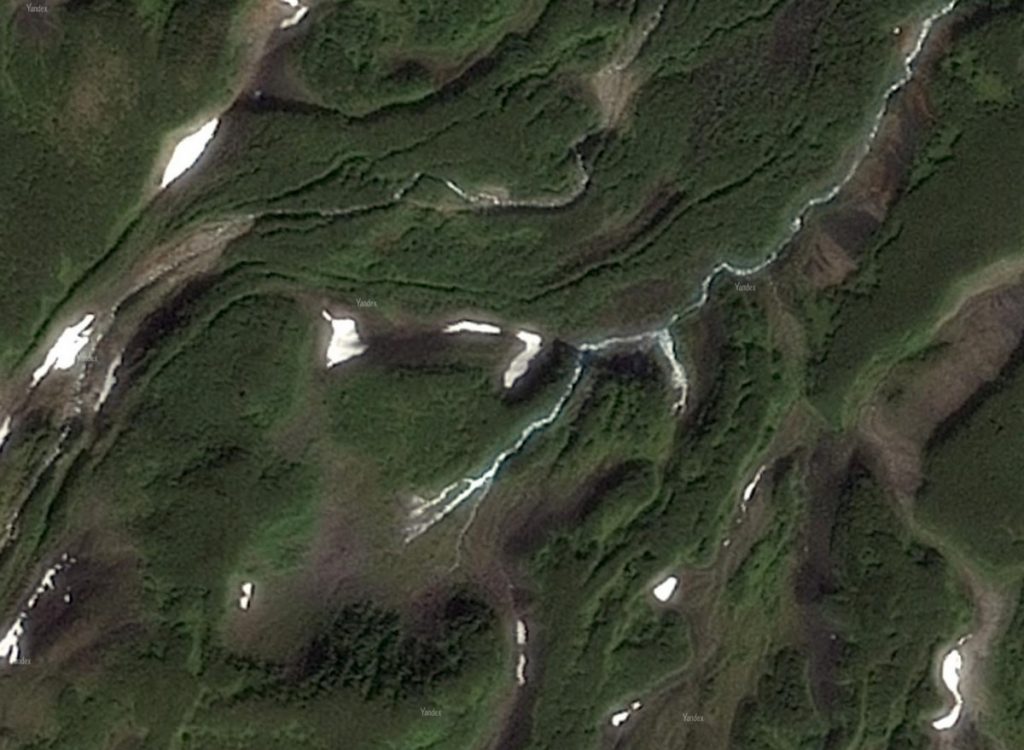 Here’s the route we took for our Koshelev/white waterfalls/fountains/streams trek:

All the Kamchatka-2018 pics are here.

That’s all for today folks. But I’ll see you back here tomorrow for more tales from the Kamchatkan side!…