An old nugget of wisdom states that ‘one can look forever at three things: fire, water, and other people working’. We had ~fire yesterday, with volcanoes that occasionally breathe fire. So logically, today, it’s water’s turn…

No. 2: Victoria Falls, on the Zambia–Zimbabwe border.

Aka Mosi-oa-Tunya, these are the most wonderful waterfalls in the world; also the largest by area of falling water. Length – 1.8km; height – over 100m. A spectacle you can stare at forever, just like in the wise old saying ). 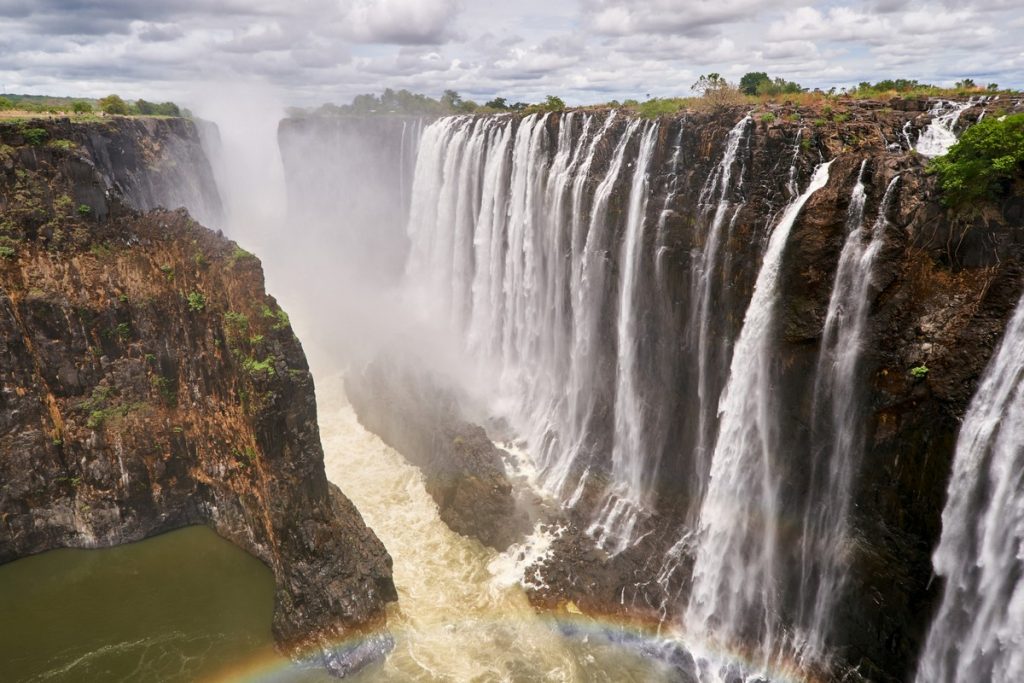 The falls are even better when there are rainbows: 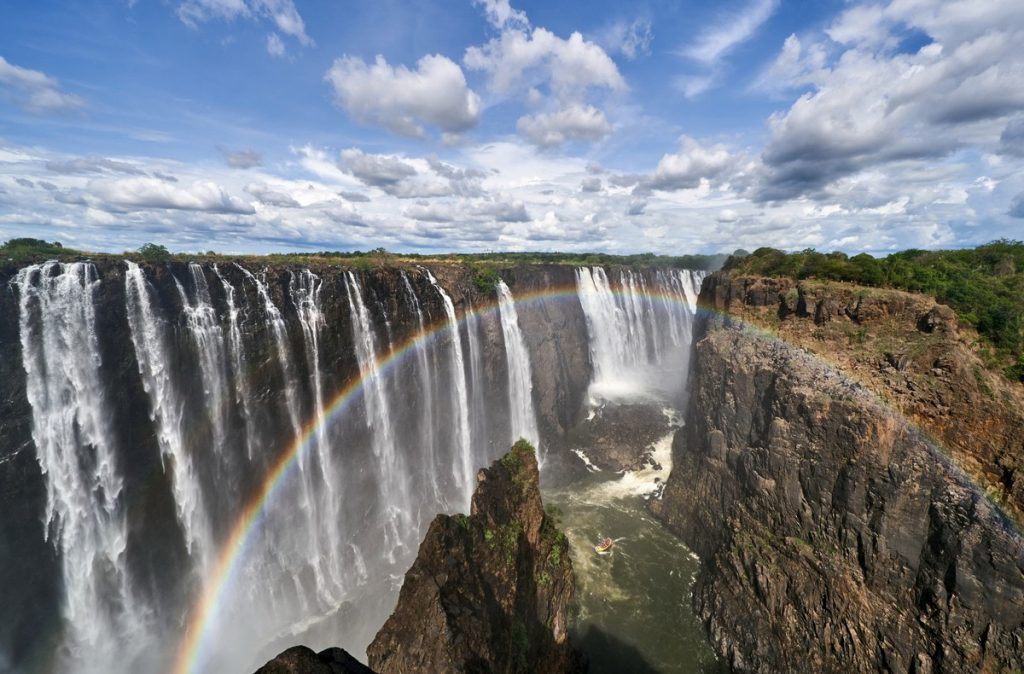 You can stroll up and down the full length of the falls; in some places you can walk up right to the edge of the cliffs. 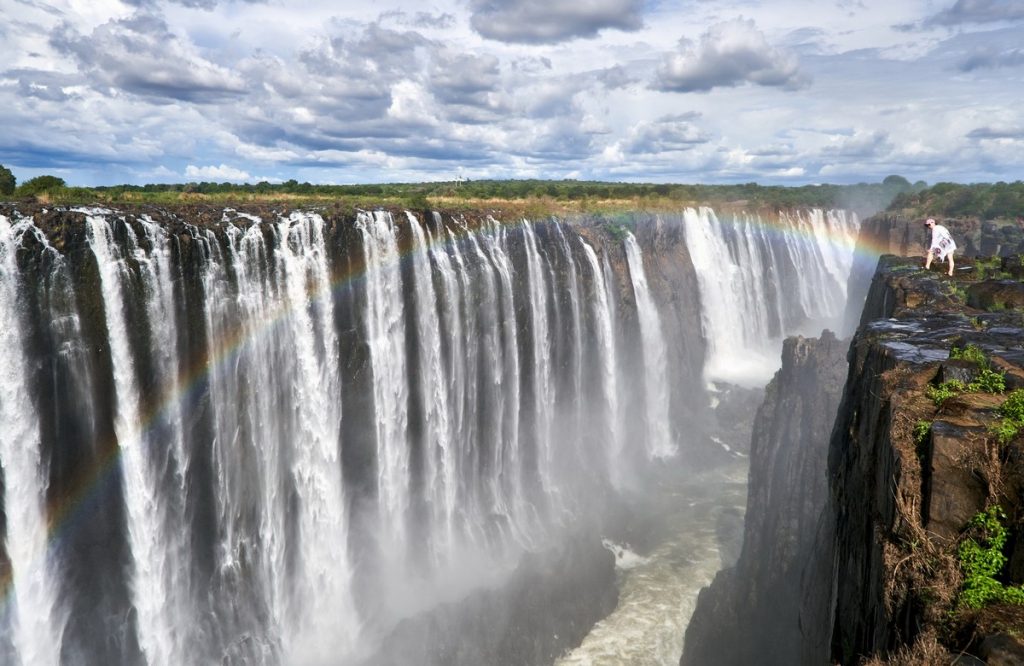 Viewing the falls from both sides of the border is highly recommended, which takes up a full day as crossing the Zambia–Zimbabwe border takes some time. The day after, if one’s purse permits it – getting an aerial view from up in a helicopter can’t be beat: 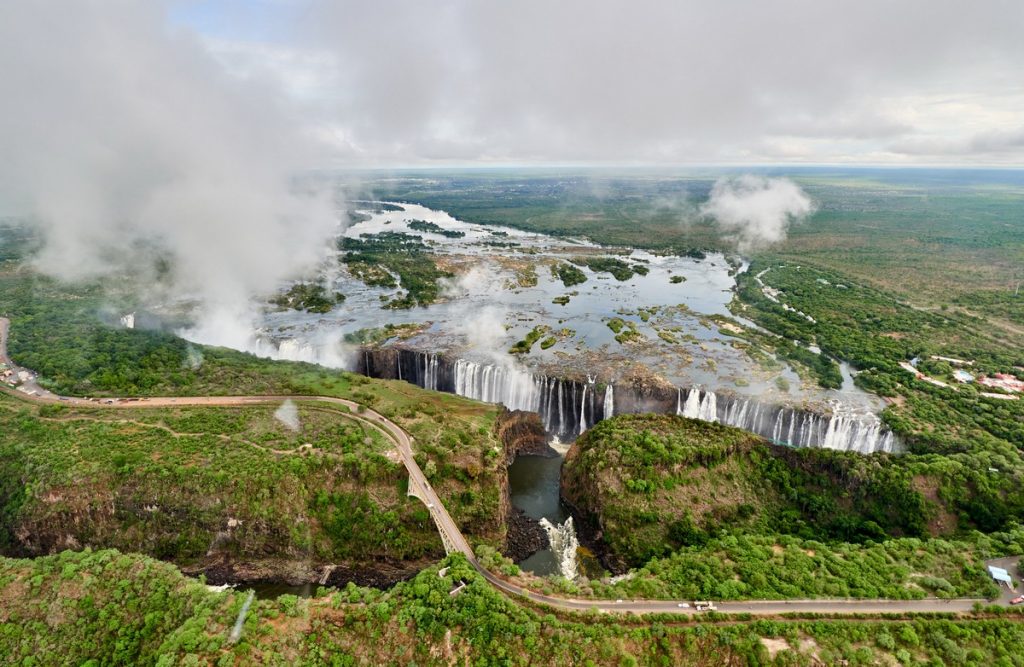 Insider tip! If you do go for a helicopter flight, make sure to arrange it in Zambia. In Zimbabwe the choppers fly real high, with no acrobatics. In Zambia – just the opposite: super low and in Star Wars mode!

Apparently you can swim in the river up top real close to the edge of the cliff the water falls from! You’re attached to a safety rope, just in case, but still. Or if that doesn’t float your boat you can… float in a boat on same river up top near the edge. Alas, though I’ve visited the falls twice already, we never got round to this clearly mandatory undertaking. As I often say: next time.

Another important thing: choosing the right season to visit. The best time of all is in the dry season, when the water level isn’t so high – this is around fall and winter. In spring and summer – rain season – the Zambezi is too high and fast-moving, meaning you might not be able to see much at all of the waterfalls for all the spray/mist in the air: 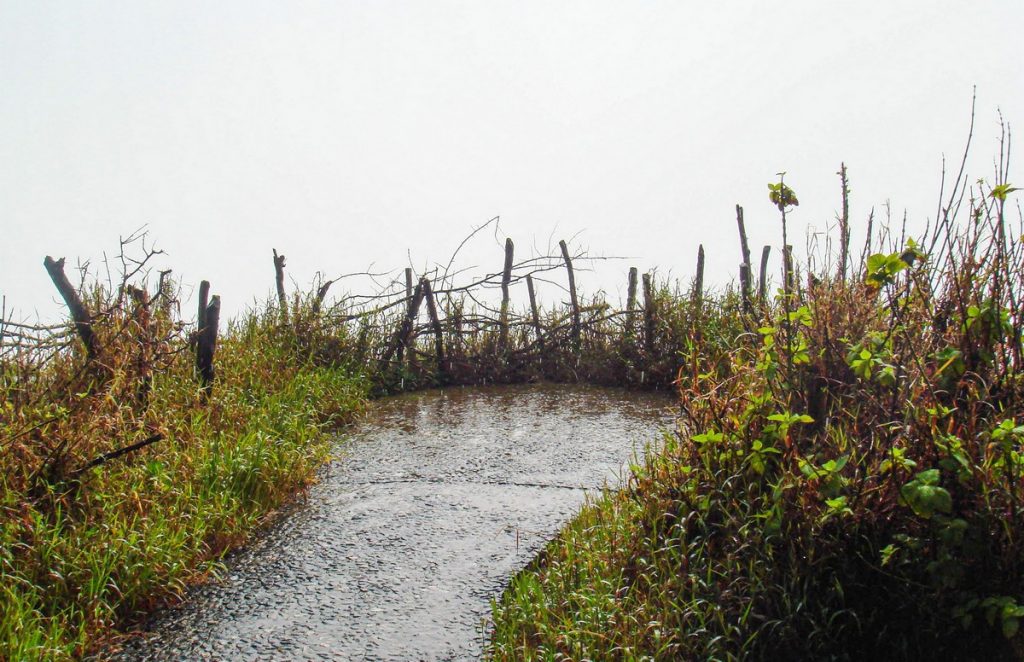 In wet season you need to walk off to the sides to catch a proper glimpse:

So what about runner-up waterfalls? There are two worthy of mention – the Niagara Falls and the Iguazu Falls: both similarly fabulous falls, but not quite as large and magnificent as Victoria. Remarkably, I’ve never been up close to the former. As to the latter – I’ve been a full three times, and viewed them from probably every single angle possible, and at different times of the year: 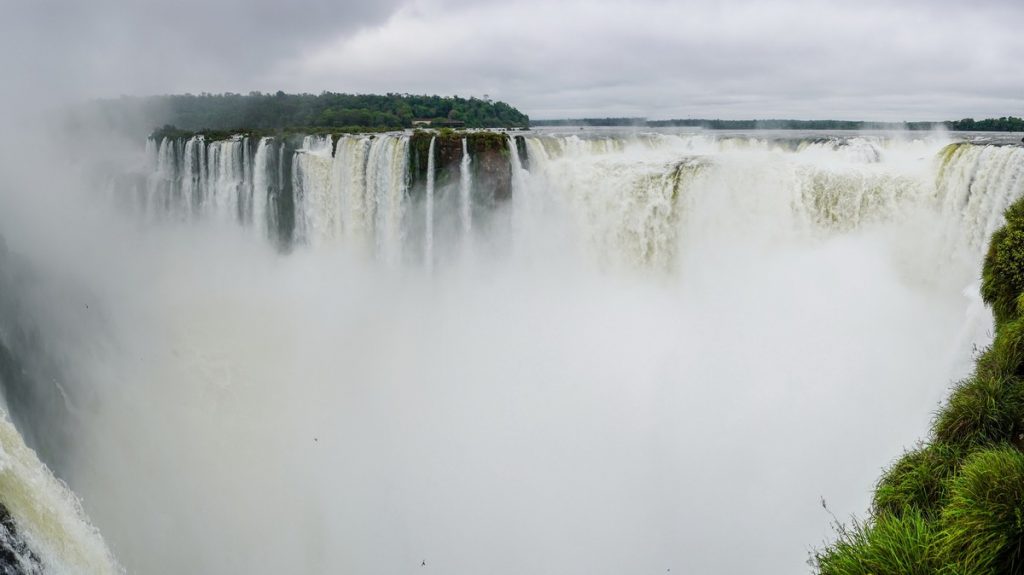 I have seen the Niagara Falls from a plane. I’ve even been near them (on the ground) before, but for some completely unacceptable reason we didn’t drive over to this completely must-see natural phenomenon. The photos I’ve found on the internet though do testify to their being significantly smaller in scale and grandiosity than Victoria Falls.

If you do ever make it to Iguazu, don’t miss its unique attraction: going on a motor boat behind the waterfalls. No, really! The world’s most invigorating shower you could ever wish to take :) -> 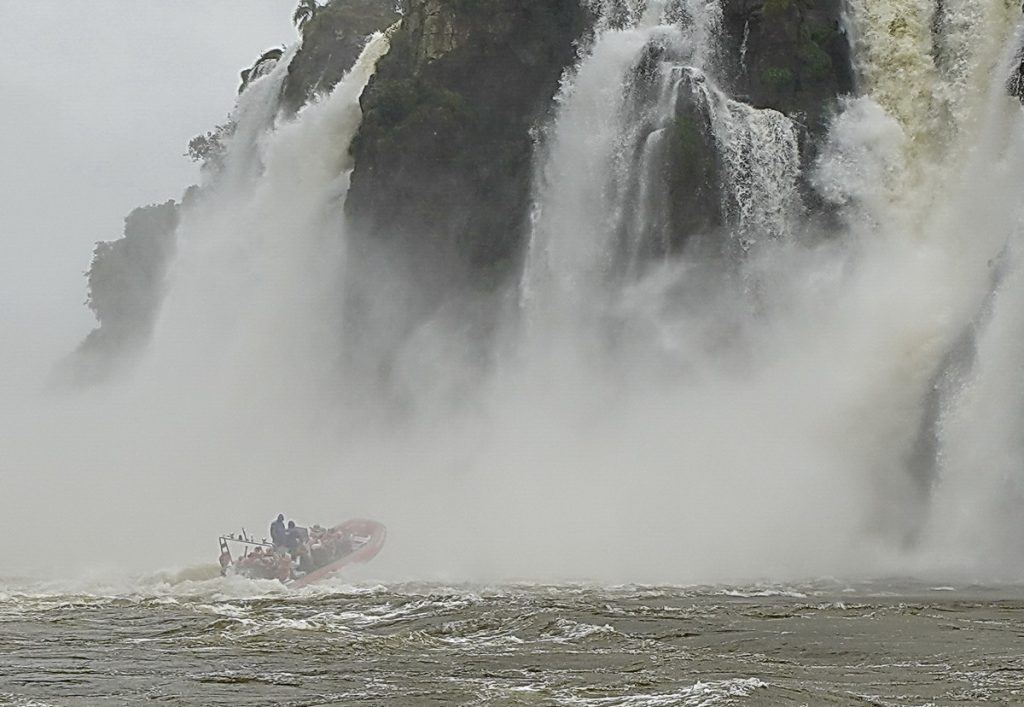 Continuing the water theme, here’s water of an altogether different kind: not wild and white, but calm and… turquoise…

If ever there were an instruction manual on ‘How to Create Paradise’ for the gods or whatever else creates life in the universe, photos of this place would run the whole way through it. Anomalously beautiful atolls with volcanic cliffs in the center, surrounded by ’50 Shades of Blue’: 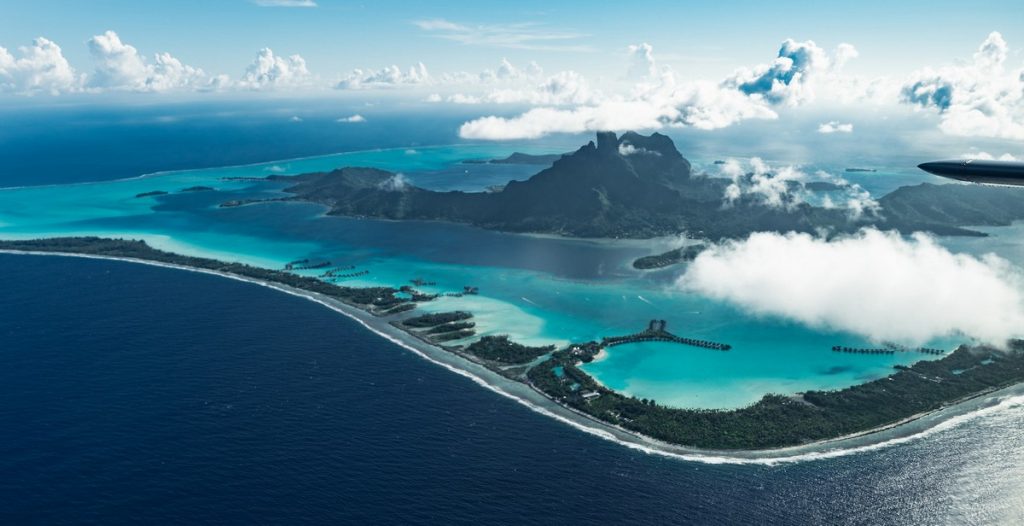 Come on, corona, hurry up, darn it, and be off with you – for good. Then we can have the world open up again and get back to places such as Bora Bora. Ooh. Can’t wait…

Turquoise water runner-up? Exuma in the Bahamas. I’ll let the photos do the talking. But be careful – you might be blinded by their brightness! Another 50 Shades of Blue, but not of a volcanic kind – it’s a long archipelago surrounded by sandbanks:

Another runner-up: the limestone terraces of Huanglong in China. A bit like Turkey’s Pamukkale, but painted bright turquoise, and much larger in scale:

And not far from Huanglong is the Jiuzhaigou nature reserve and national park. Cascades of lakes and waterfalls, crystal clear – yet somehow turquoise! – water in lakes, and a freakish forest of horizontally growing trees under that same crazy-colored water, and all that set in the most picturesque of mountainous landscapes:

And that completes this H2O-themed portion of my Top-12 Ultimate Natural Beauties of the World. Next theme – also H2O, but of a very different kind: ice!…