Half an hour away on a plane from the not-so small (14-million-peopled!) Sichuan capital, Chengdu, in Southwest China, there’s yet another masterpiece of Chinese natural beauty: Huanglong. Basically it’s a cascade of brightly colored lakes and waterfalls made up of highly mineralized (calcareous) water. But that’s enough words. Better just check out the pics… 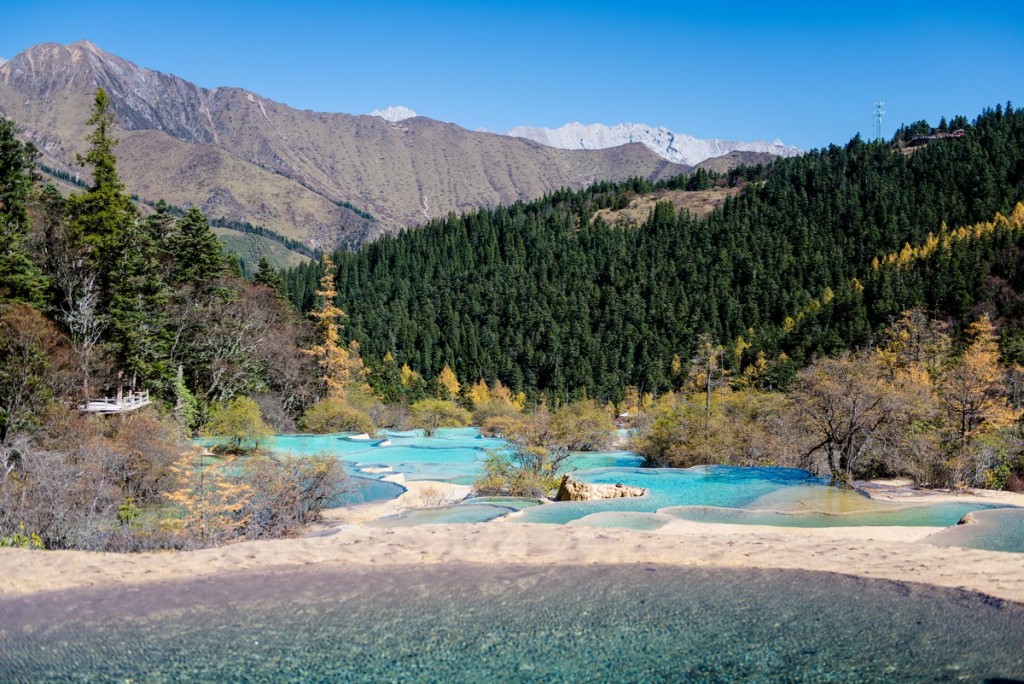 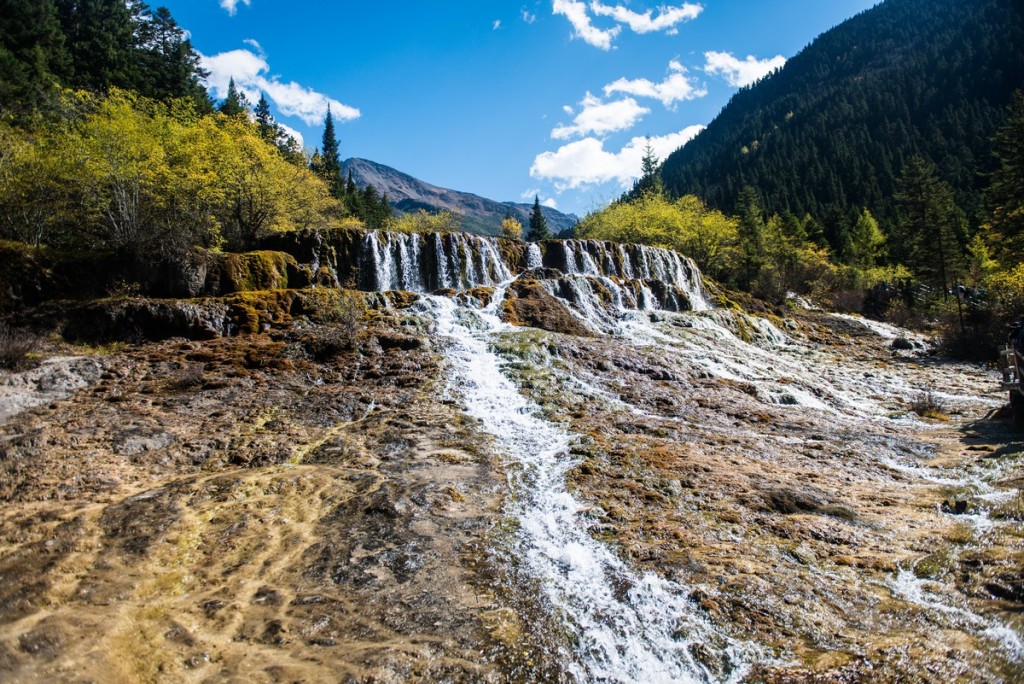 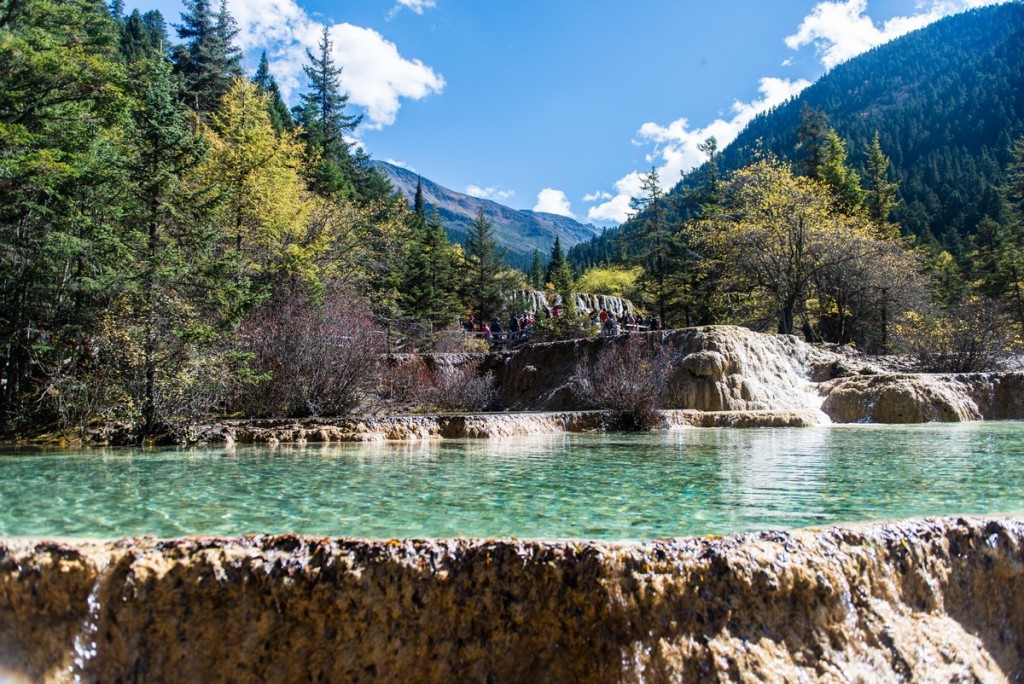 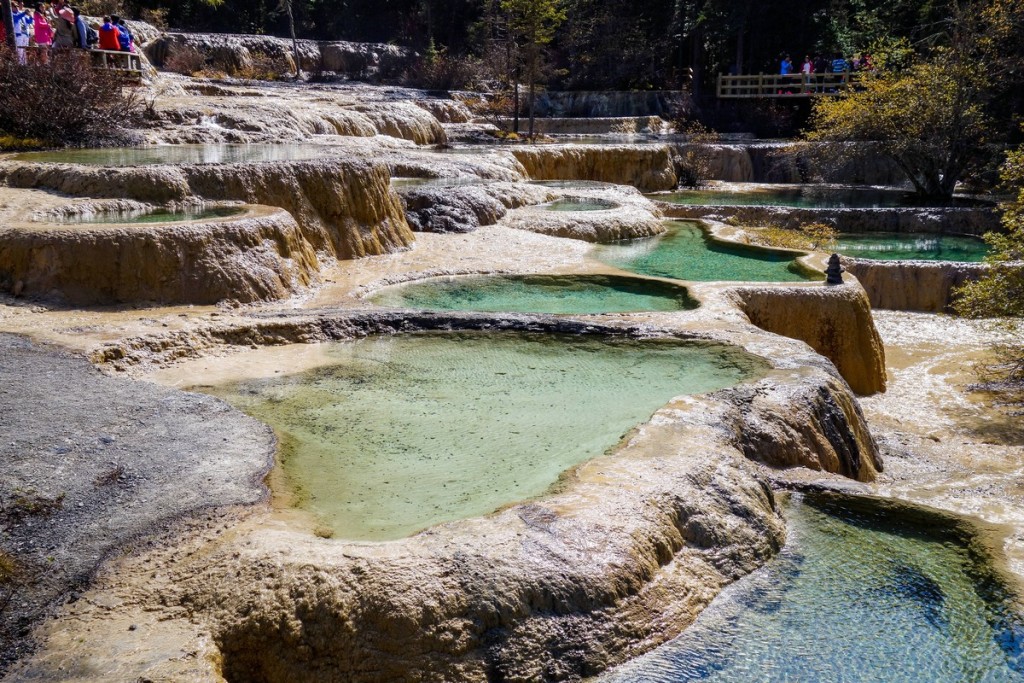 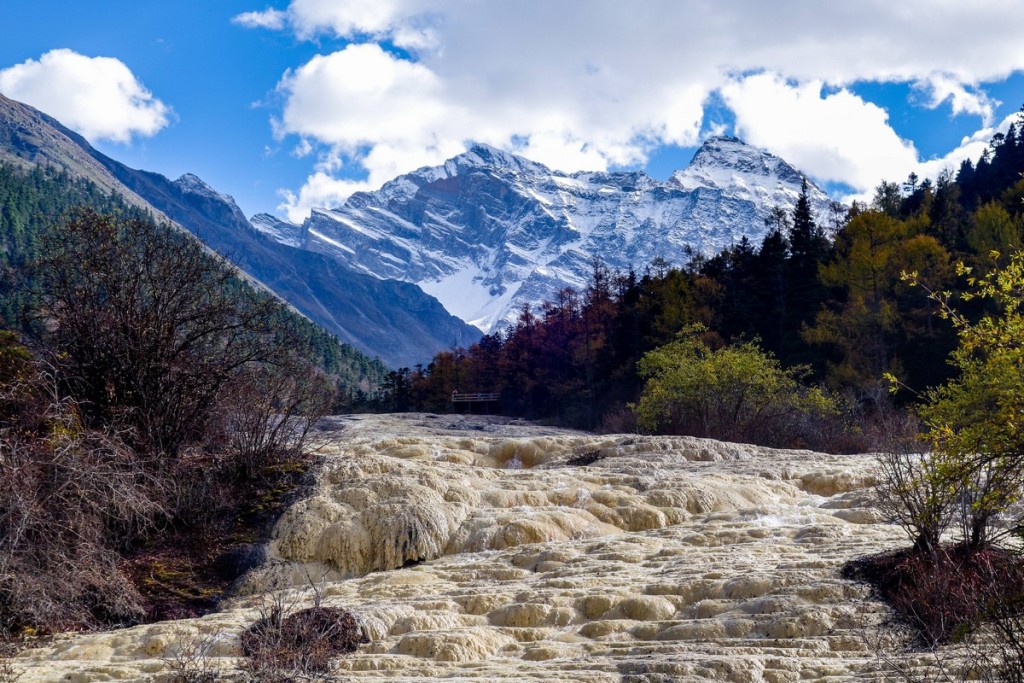 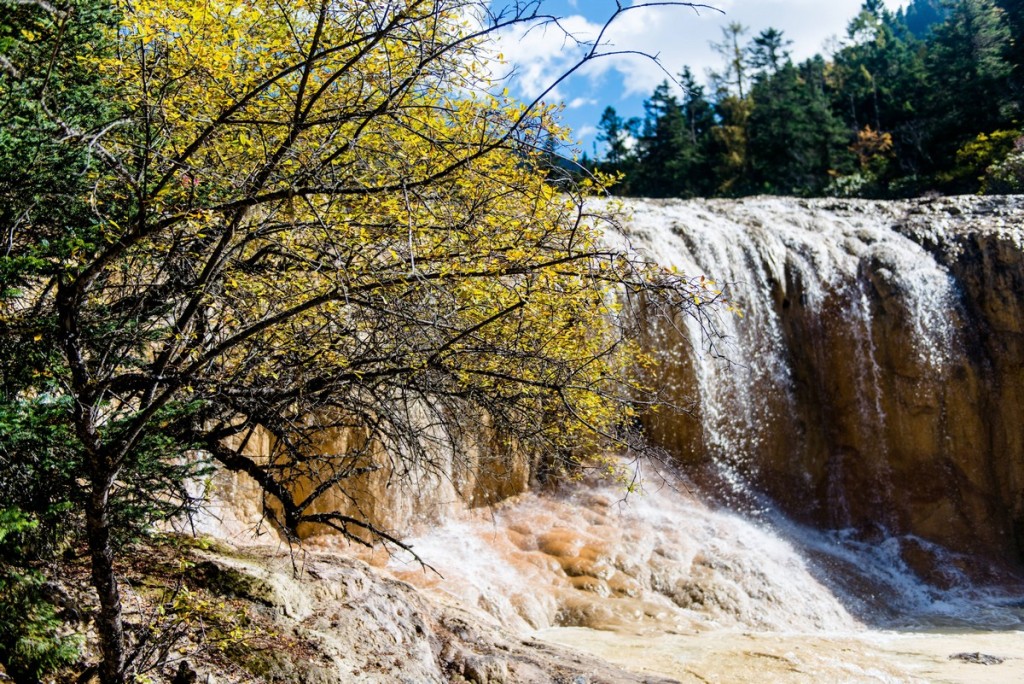 The views, I’m sure you’ll agree, are staggeringly stunning. Too stunning to be consumed in one go. So I’ve split the pics up a bit: below – batches of several OMG-pics, then some relatively dull explanatory text, then more OMG-pics, and so on until the end of this rather lengthy, though very juicy post.

As you stroll along the tourist paths here you find yourself forever stopping to take photos of the awesome scenery all around – all the more so at daybreak and sundown. For at these times of day the sun magically ‘colors in’ the scene as if it’s a painting-by-numbers book. And not just any old colors. I mean different bright, striking, vivid colors. Like I say, you often find yourself stopping – more like freezing, rabbit in the headlights style – in awe at it all, the only thing moving being your finger on the camera button.

Here’s the twilight we witnessed:

The below photos show the sun doing its gradual coloring-in thing:

Ok. That was some of the dull text I warned you about. Now back to the pics…

Water runs down practically the whole valley. A forest seems to reside in the water. Or is it the other way round? Whatever, it’s a most stunning sight to behold.

In these parts of the world in mid-October (when we were there) day breaks at 7am, while up above in the ravine the sun appears at 9.40am. So it’s between seven and ten when you need to be here. But it’s worth getting up so early; just have a look!

It’s important here to wear warm clothes: Huanglong is high up in the mountains – around 3500 meters above the level your normal life gets lived at. In October it gets hard to breathe (more about that below), and there’s a hoarfrost coating every surface daily since temperatures can get below zero degrees centigrade. So obviously wrapping up warm is a good idea.

(Just a little more boring text coming – then photos again. Bear with me!…)

We walked along the signposted footpaths here very steadily. Very steadily because the footpaths take you up, up, up gradually and breathing gets a bit difficult. So up, up, up we steadily strolled, and then – boom! Desktop wallpaper heaven! Oh my giddy aunt!… 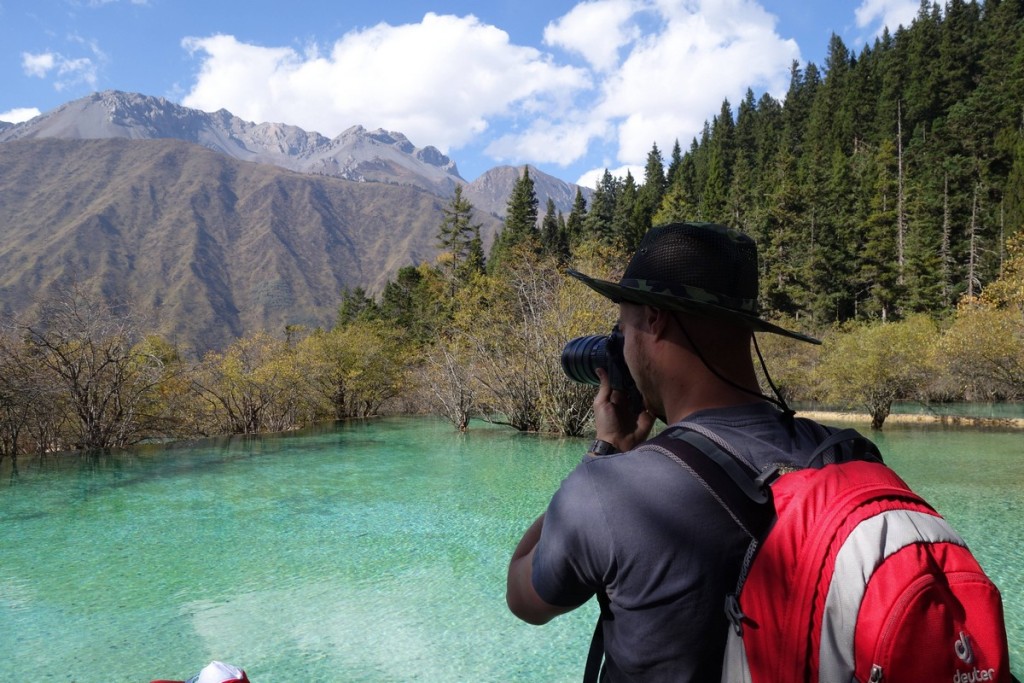 When something you’ve taken for granted since birth – oxygen – is suddenly in short supply it can be a little unnerving for the uninitiated. Thankfully, I’d done this before, so was relatively relaxed.

And there was you thinking China was all vast lowlands (with factories and smokestacks producing everything form cigarette lighters to iPhones), eh? Turns out China does vast mountainous expanses too – even with views of distant Tibet. I wasn’t expecting that either. But it’s the colors of the vast mountainous expanses that are more astonishing: out-of-this-world astounding!

When you’re planning on getting so high up (up to 3600 meters above sea level), acclimatization is highly recommended. If you’ve no time for that, mercifully there are oxygen bars dotted along the routes here.

Huanglong is a real interesting place. But being so high up, you need to be careful with planning the logistics. After my recent experience here, there are the two optimal ways of proceeding:

The first approach is best if you check into your hotel the previous evening, and you’ve a full day free the following day for Huanglong (including acclimatization). Take the mountain lift (to which there are no lines early morning), check out the dawn at the top, go down to the waterfall, have a bite to eat, chill a bit, and then back up, and then go back down on the left path (if looking from above).

The second approach, of two half-days, is best if you have two whole days free. Our first installment was afternoon-evening on the first day, and morning-afternoon on the second. On the first day it’s best to avoid the line for the mountain lift – as it gets silly long – and to go on foot up to Huanglong (it’s not so far). Then on the second day use the lift if you’re early enough – by around 8am. Any later and it starts getting silly, as mentioned.

That line. It’s absurdly long by day. Thousands upon thousands of Chinese tourists flock here daily, and every one of them, it seems, likes to take the relaxed option for getting up to the main attraction. You’ve been warned! 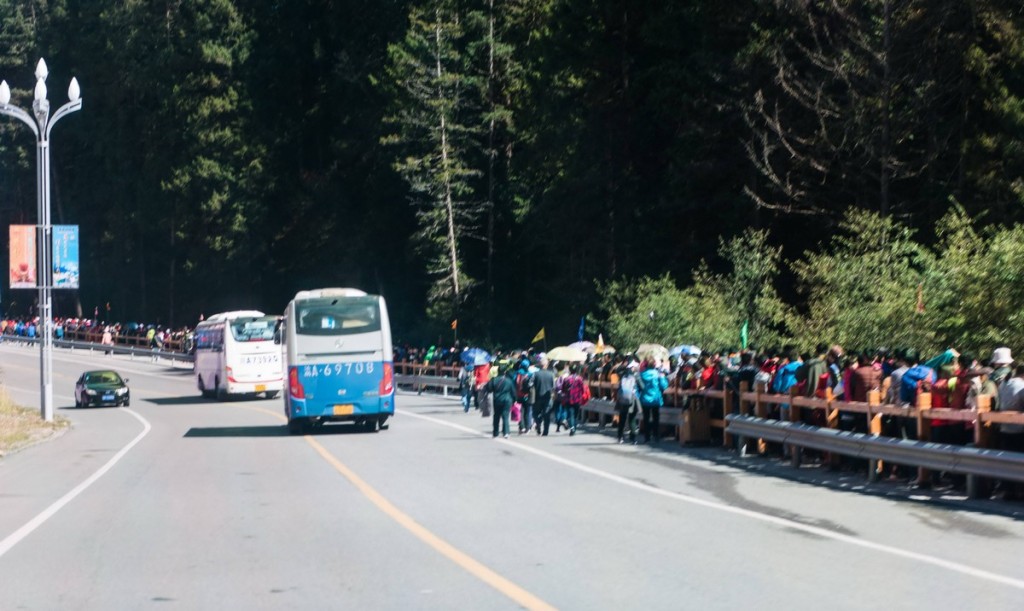 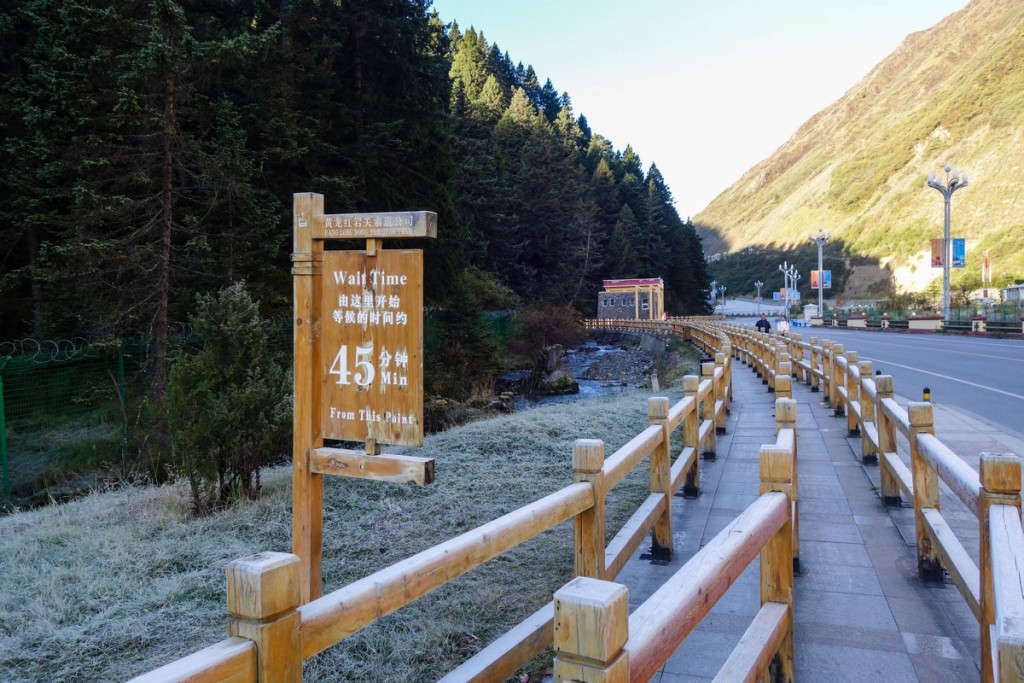 This is what the line looks like at 8am. Most hospitable and tourist-friendly. The take-away? If you really must use the lift – book into the hotel opposite it (there is one)! 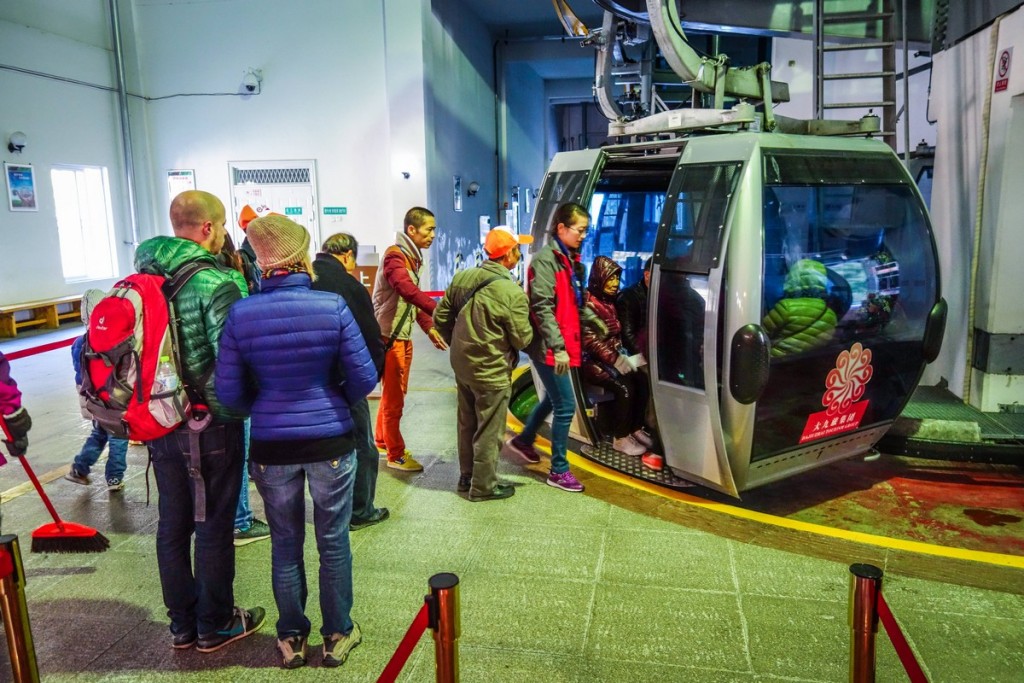 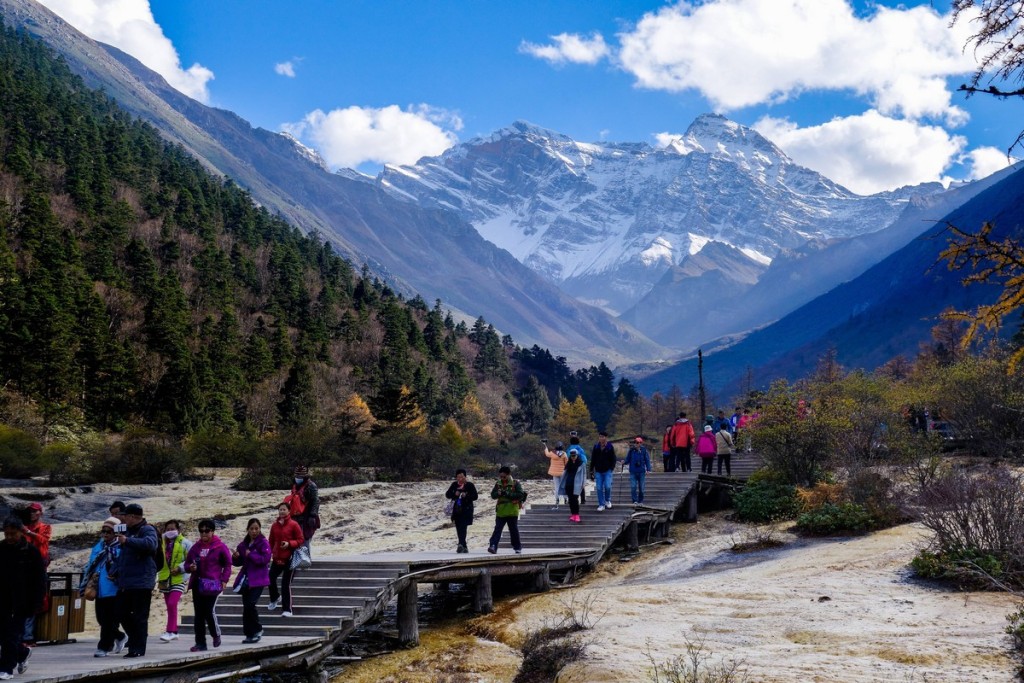 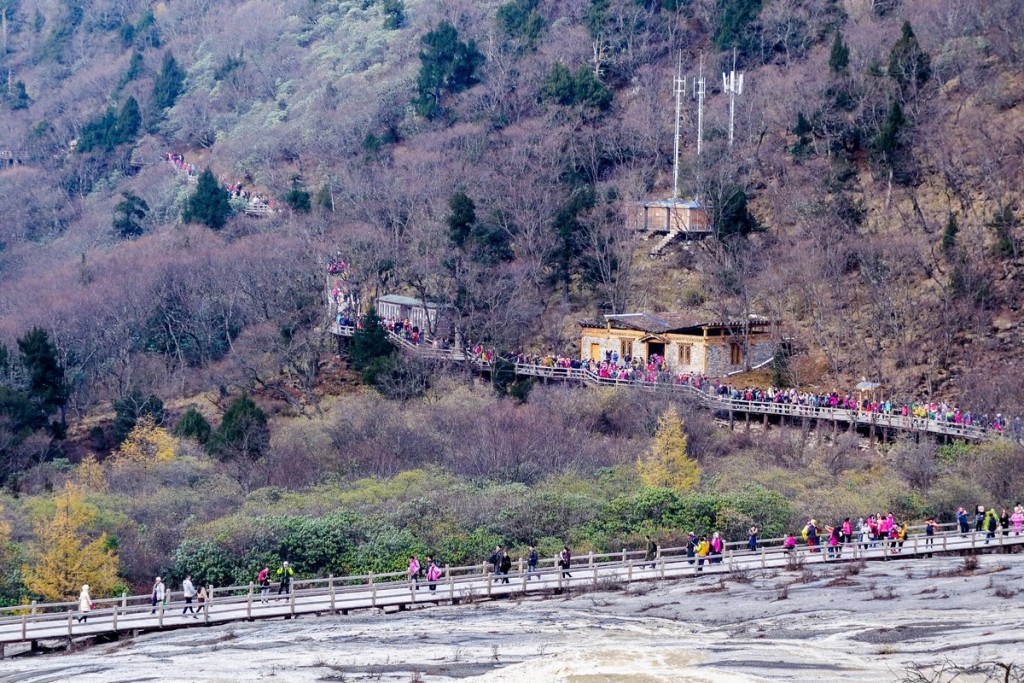 What to see in particular, where, and how get there – that gets a little difficult, so I’ll let photos of the maps here do the explaining: 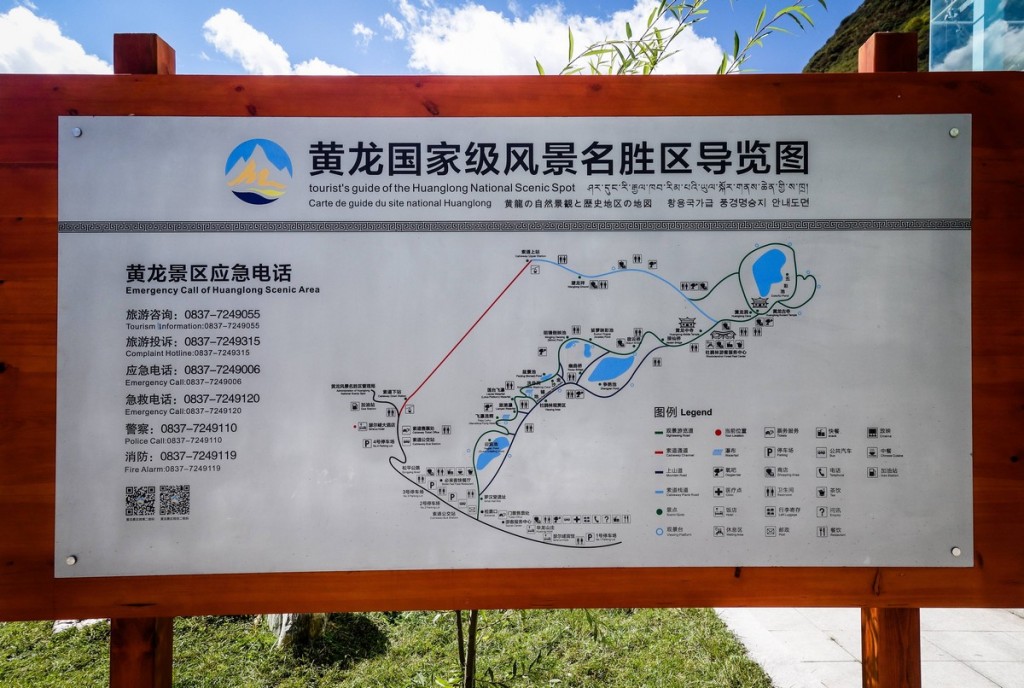 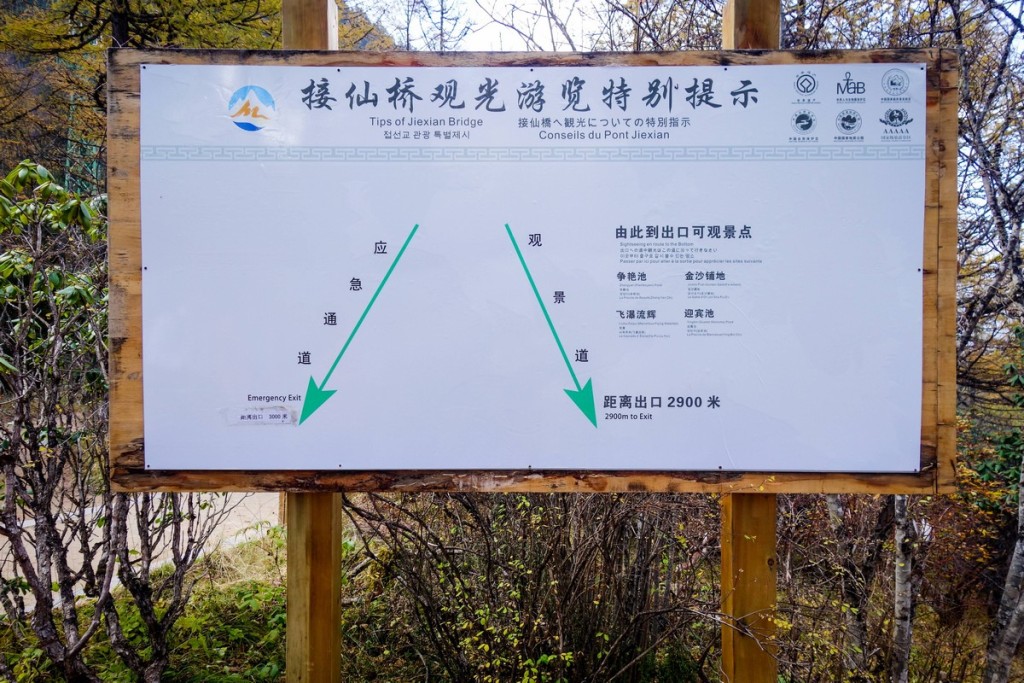 The right arrow on the above sign is the one to go for – a lot more to see going that way. The other – practically always in forest, with minimal visibility of the surrounding landscapes.

By the way, to get there you first need to land at the local airport! And the local airport is 3448 meters about sea level! To fly from Chengdu takes just 40 minutes. Just make sure to sit on the left side by the window (seats ‘A’), and out of the window you’ll catch Tibet! 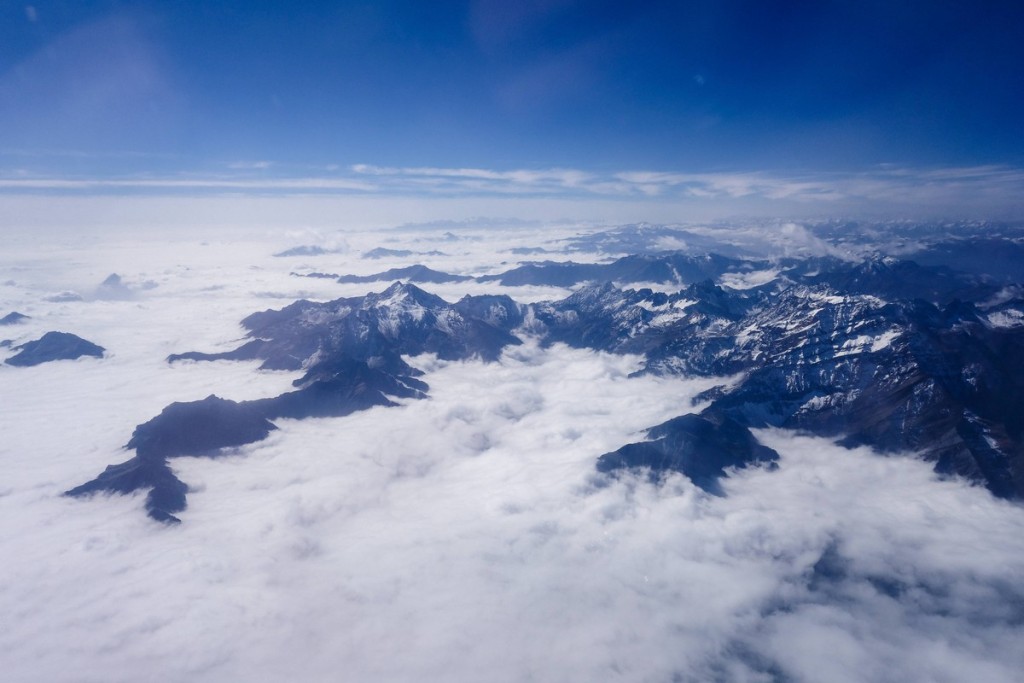 The airport being at such a high altitude means landing here isn’t easy for everyone. Some, flying in from +25C Chengdu to the +8C Huanglong even faint! The medical room in the airport is probably the world’s busiest – as are the shops selling winter coats near the baggage carousel :). 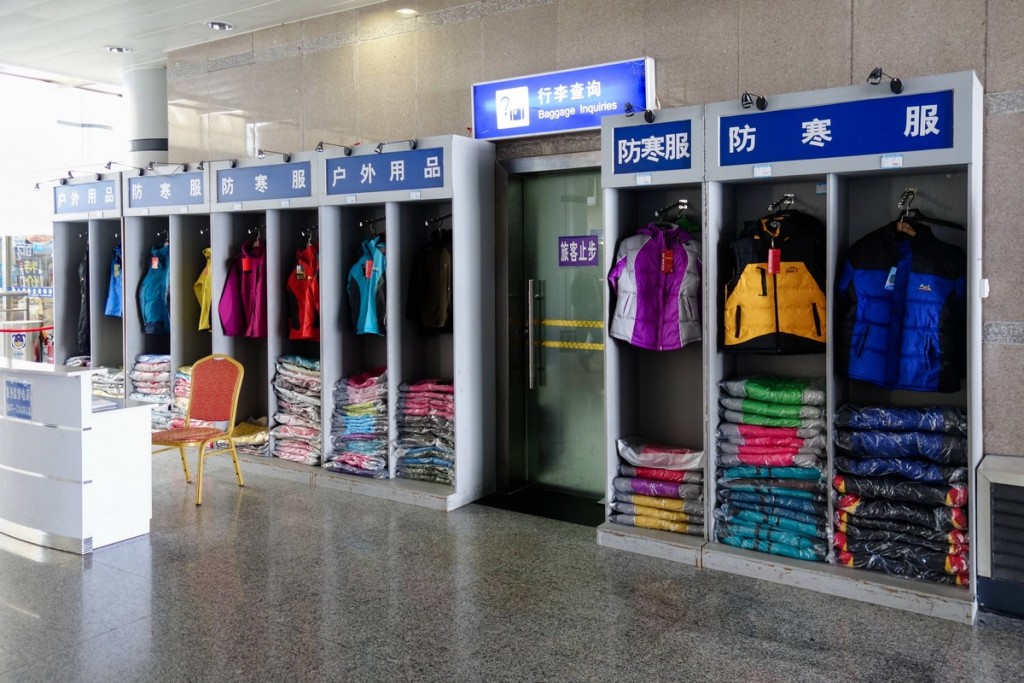 Plenty of planes fly here from 10 Chinese cities: Beijing, Shanghai, Chengdu, Guangzhou and so on.

From Chengdu it’s most convenient – 15 flights per day!

From the airport to Huanglong national park it’s ~50km – about an hour on an exceedingly scenic road.

Btw, why’s this place called Huanglong? It means yellow dragon in Chinese. And here’s why: 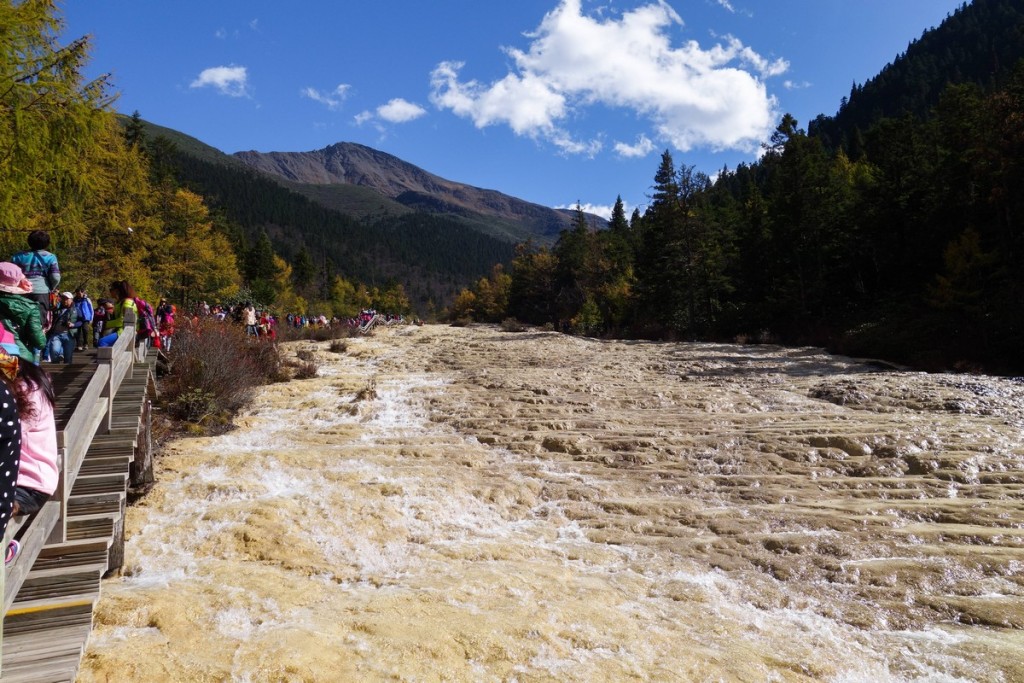 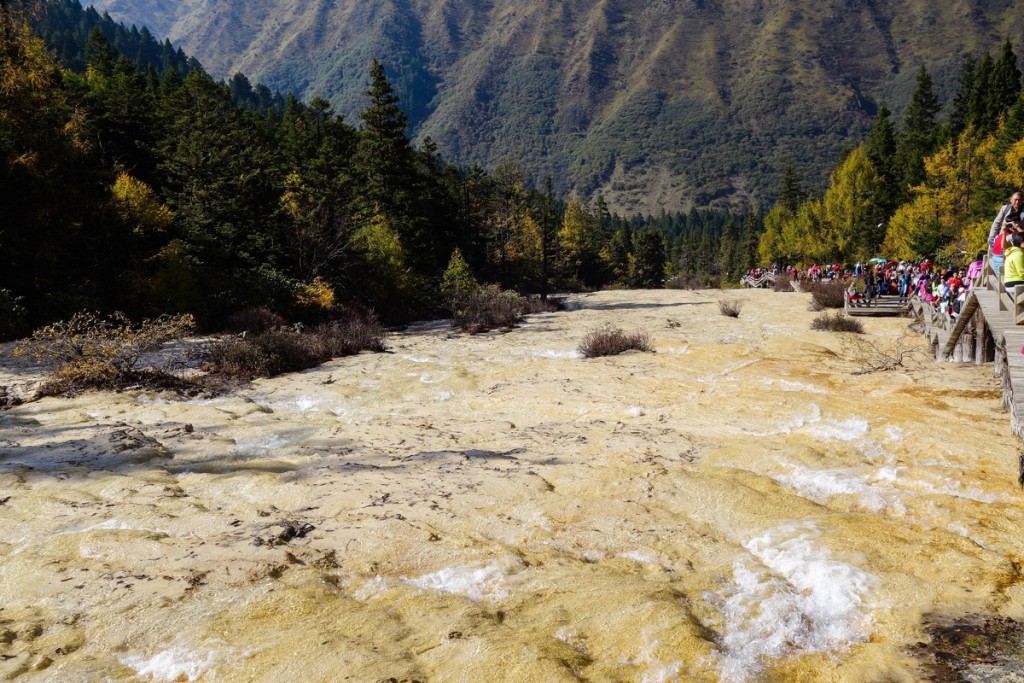 As we were taking our stroll real easy, you can imagine our surprise when we saw marching past us a local man – well past his twenties or thirties – with a steel I-beam on his shoulder! At an altitude of 3.5 thousand meters! Now, there’s men, and there’s men. Then there are Supermen! 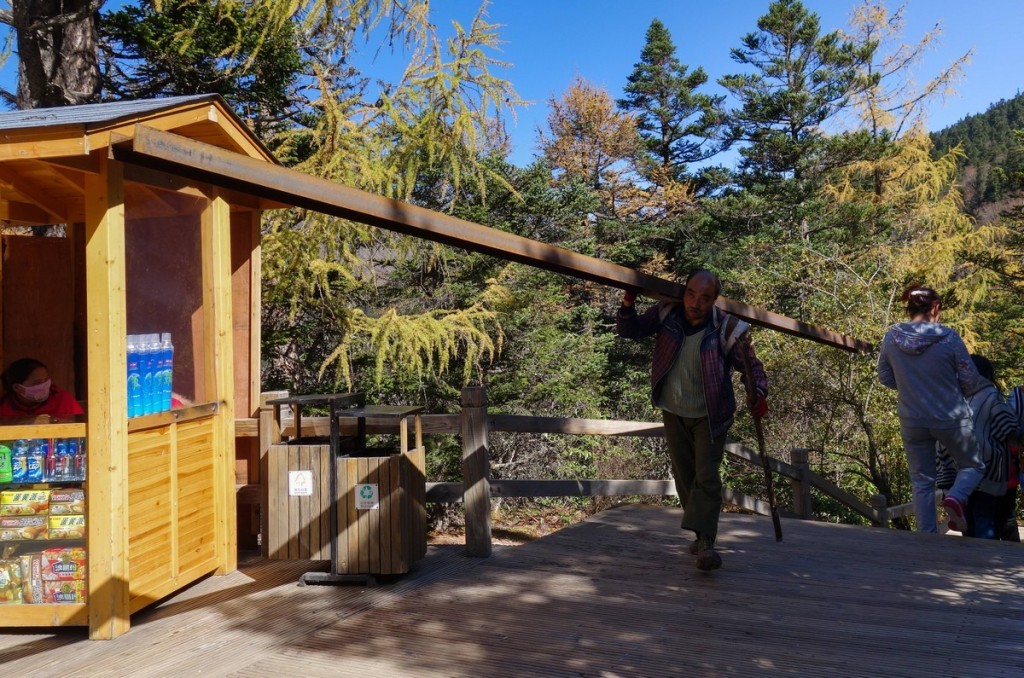 All the photos from Huanglong are here.