Next stop on the route of my hidden China vacation – the Valley of Nine Villages, aka, the Jiuzhaigou (九寨沟) nature reserve and national park: Yet ANOTHER absurdly astounding Chinese natural beauty!

Cascades of lakes and waterfalls, crystal clear – albeit fluorescent turquoise! – water in lakes, and a freakish forest of horizontally growing trees under that same crazy colored water, and all that set in the most picturesque of mountainous landscapes. And in the fall there’s a bonus: the blends of reds and yellows and oranges of autumn leaves. Oh my gigabytes. 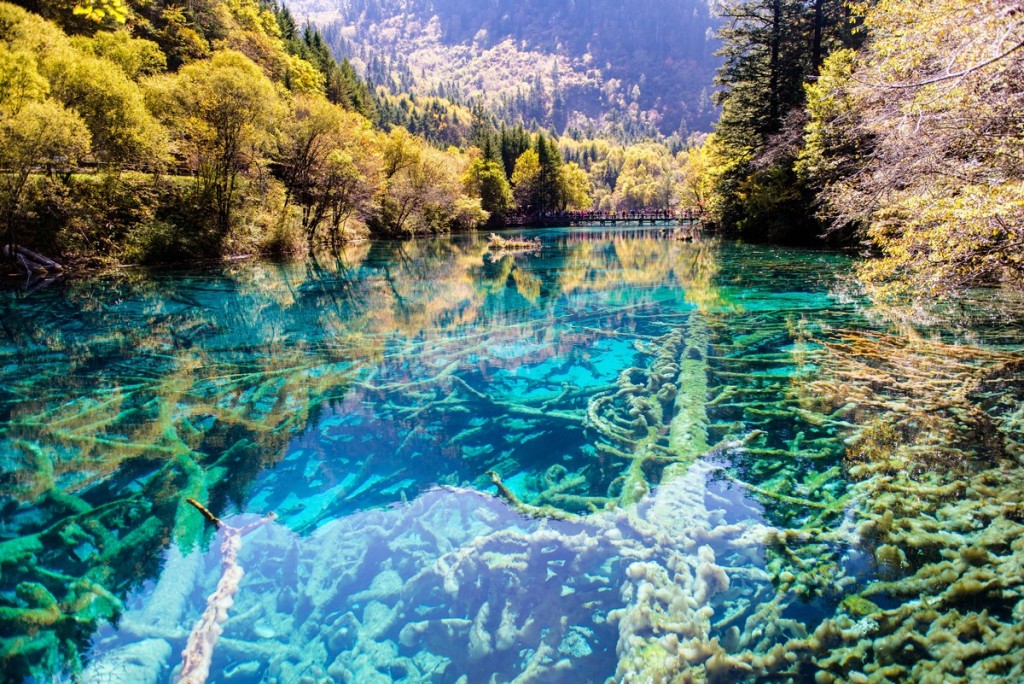 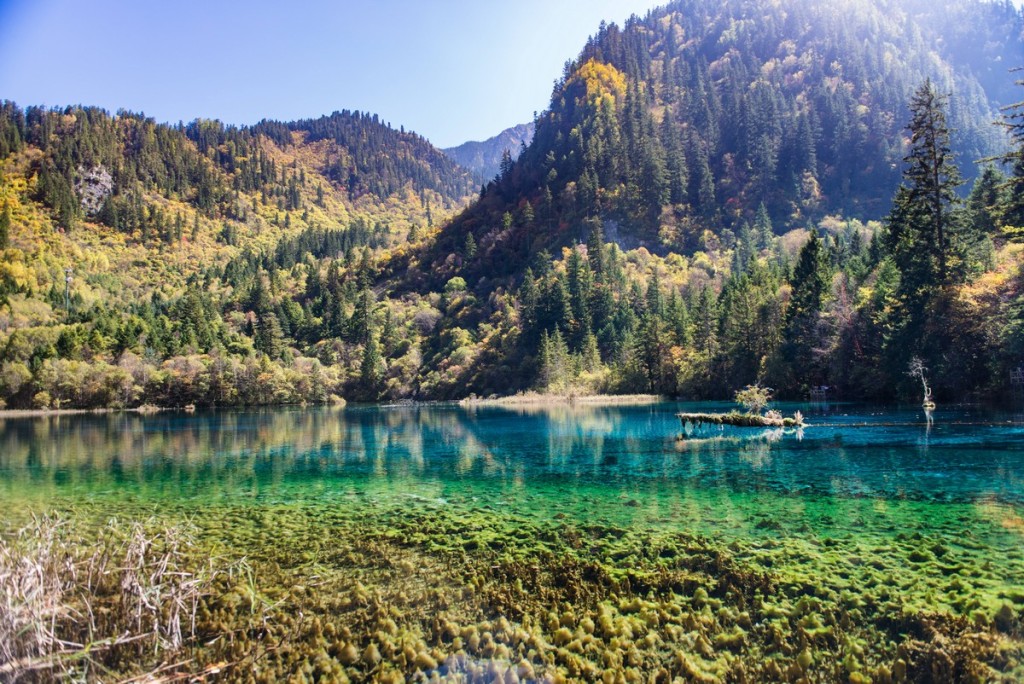 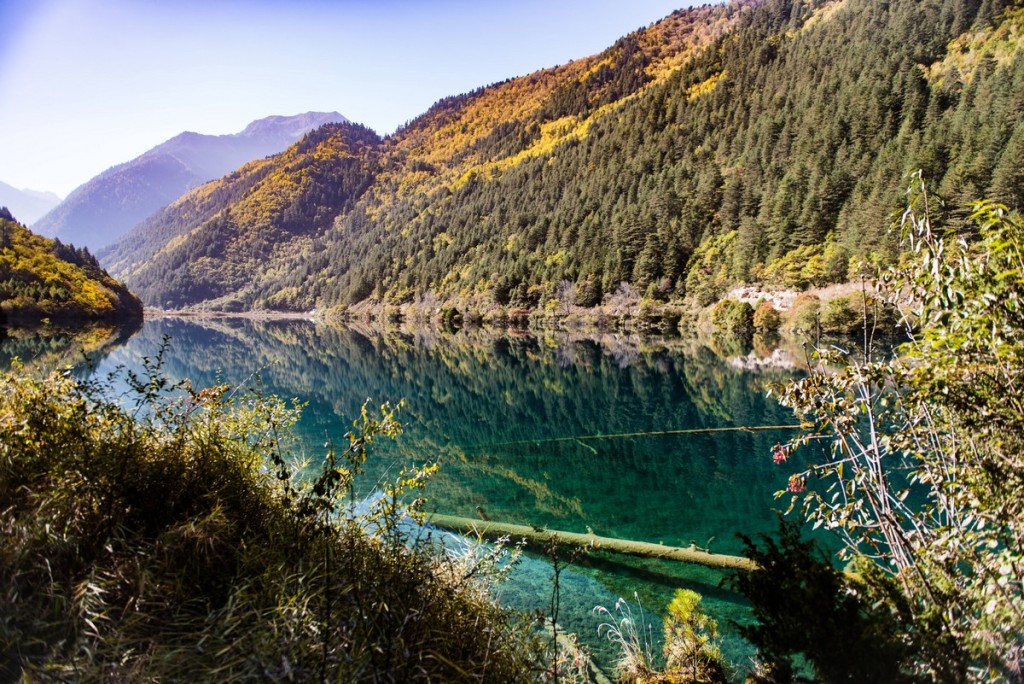 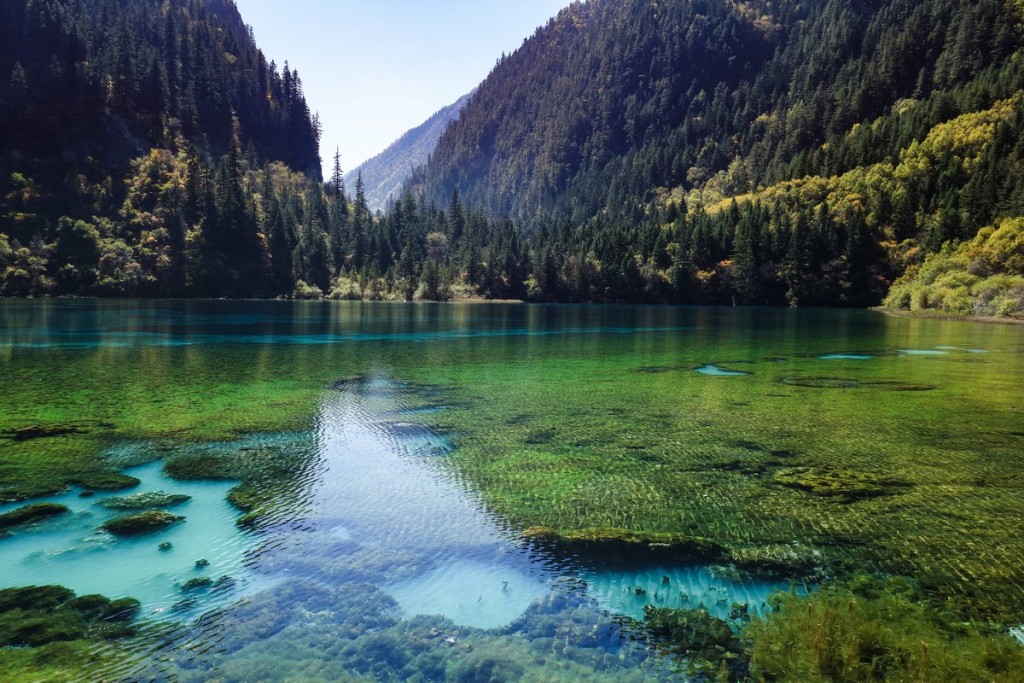 Jiuzhaigou isn’t far from the place I told you all about in my previous post, Huanglong. It’s about 2-3 hours in a car from Huanglong, or 90 minutes from the local airport. 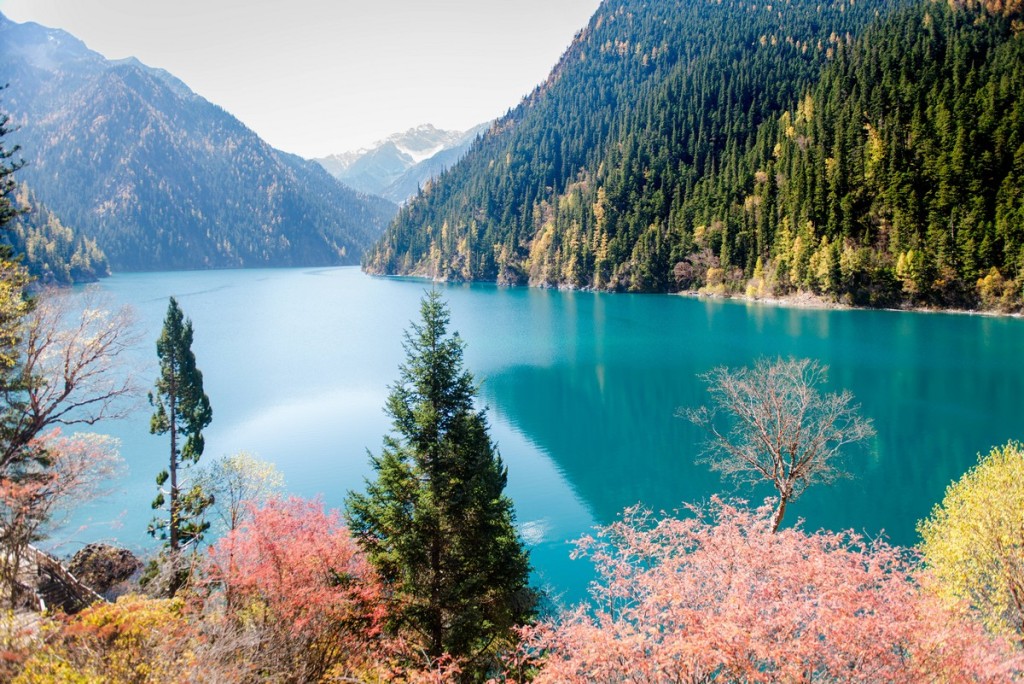 As you can see, the water here is H2-Oh-so clear you can see all the detail of what’s going on under it. Turns out the turquoise color comes from some unique mineral content infused in the water.

If there’s no wind the surrounding autumn trees (at least, in October) add to the color-fest going on in the water with their reflections. Oh my Guangzhou. One lake is even called Mirror Lake.

The water here seems to flow all around the valley – not in just a one-direction stream as you might typically expect. It just covers all available space, flowing from lake to lake.

Between the lakes there are probably five of six waterfalls.

Now for some detail: the what to check out in particular here…

The national park is made up of three sections of mountain valley stretching from north to south. This is how they look on Google Maps: 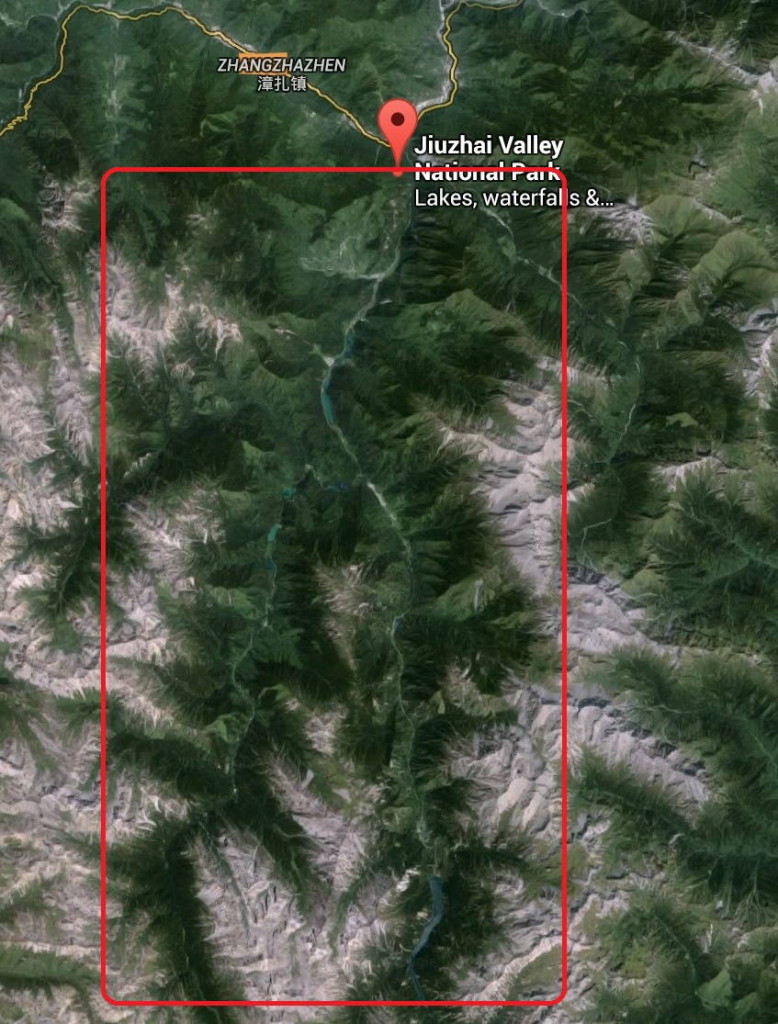 The valleys join up to make a big upside-down ‘Y’ shape if viewed on satellite pics. Here it is shown on the map, logically showing north pointing downwards and south – upwards :).

The ‘leg’ of the Y is highly recommend for strolling along from the ‘crossroads’ in the middle (where there’s a tourist center, btw). How far? As far as your legs will carry you! Cascading lakes, waterfalls, underwater trees, a Buddhist temple, mountain views – and in all around a 10km hike. You can walk to the very end (which we didn’t have time for), or to the bus stop near the end.

The (upper) left ‘arm’ of the Y is optional. Very pretty ‘alpine’ lakes, but they’re quite a way away, you need to take the bus, and there are only two lakes in total.

The right arm of the Y – mandatory! Full mind-blow and photographic ecstasy. However, you really don’t need to go all the way to the very end, as all there is there is a rather plain pine forest. Not that there’s anything wrong with pine forests, of course, but, well, it’s not as if they’re unique to China – they grow all over the world. What’s more, the locals LOVE pine forests, so there are always masses of Chinese tourists up there at the end. But more about that later on below…

So, I’d recommend this here route:

1) Get into the park itself (the earlier the better so as not to get caught up in long lines);

2) To head towards the right arm of the Y (Primeval Forest) by bus, but to get out at Grass Lake (so as not to get as far as the pine forest);

3) Now walk back down the paths in the direction of the entrance to the park. This is probably 25km, but it’s all downhill, and on smooth wooden paths, and with breathtaking views all around.

Optionally before the mandatory bit, you could also take a look at the lakes at the end of the left arm of the Y. But this needs doing at silly o’clock in the morning to ensure you have time for the afternoon’s mandatory installment. Take the bus, check out Long Lake and Colorful Pond, then it’s back to the crossroads (it’s hard to get lost), then onto another bus to get to the end of the right arm to start the above-described main bit.

And it’s totally worth returning in time to catch Multicolored Lake and Mirror Lake at sundown (which are in the valley, where long shadows form earlier – so make it there by 4-5pm in October).

Distances here are substantial – from the entrance to the very furthest points of the park (the ‘hands’ of the arms of the Y) it’s probably 30km at least. But buses run very frequently, and the paths everywhere are most civilized. Everywhere is signposted (sometimes with the odd error or inconsistency, but no big deal), and there are plenty of snack bars and bathrooms. Oxygen isn’t on offer, since the heights here aren’t so great – from 2000 to 3000 meters.

We were strolling along when all of a sudden the surroundings turn form Chinese exoticness to… birches and conifers. As if I was back home! 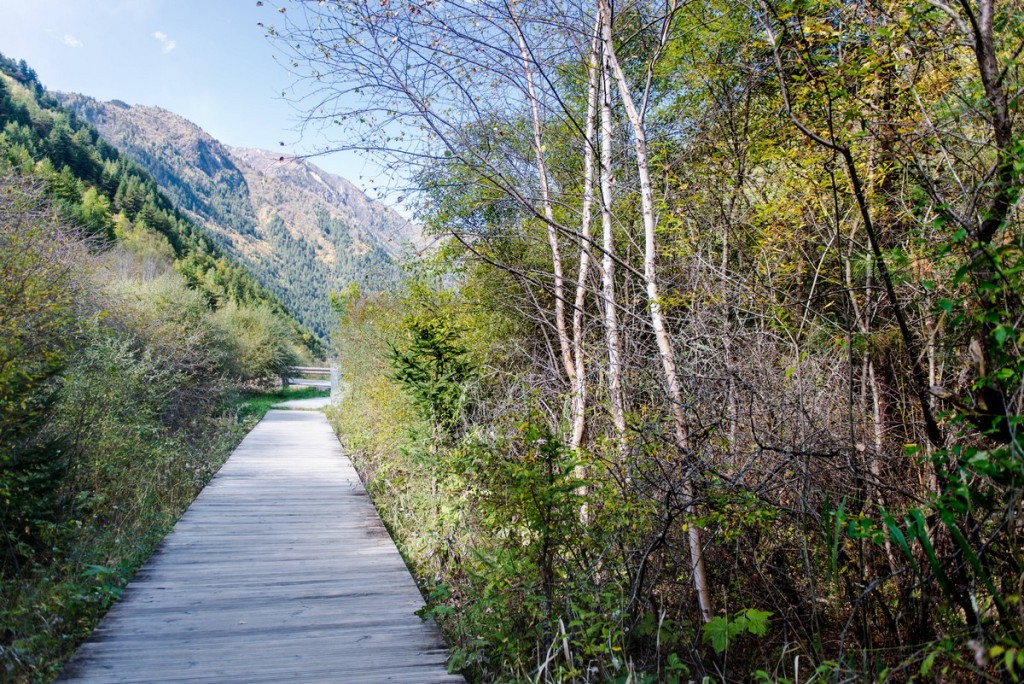 And there were also suddenly masses of Chinese tourists flocking to see this coniferous forest. ‘What’s the big deal?’ I thought. Then I realized: in most parts of China they have lots and lots of bamboo, but no pines whatsoever. Pines are a rarity in China, to be seen only here out of the whole country. That’s why they’re so popular. Whereas for me, of course, nothing new at all – I’ve been picking mushrooms in such forests since childhood!

The water in the mountain streams and lakes is also the cleanest of the cleanest – and for Chinese this also has a shock and awe effect. And not just because of industrial pollution. Water in lakes and rivers in China tends to have soil and other such natural substances making it cloudy and opaque. For example, the Yellow River is just that – yellow with all the admixtures in it.

So, where both crystal clear water + pine forests reside together – that’s where thousands and thousands of Chinese head every day. It’s a bit like a green lawn to a Bedouin. Or a sandy dune to a Russian! There is the odd non-Chinese tourist to be seen, but very rarely. The actual volumes of Chinese tourists got me curious, so I did some calculations…

The park opens at 7am. We got there somewhere around 9. After half an hour in line we went through the turnstile. On the turnstile I saw a digital display that gave 3100 as the number of tourists that had already gone through. And that was just one of eight turnstiles. So, in 2.5 hours approx. 20-25 thousand tourists had been admitted. So if folks go through the turnstiles at such a rate up to noon or even 1pm, then that’d make 50,000 folks a day. That is, around 18 million a year (+/- a million or two)!! And that’s taking no account of the crazy public holidays which boost Chinese domestic tourism even more; nor does it take account of it now being off-season; what I mean is – the 18 million is a very conservative guestimate!

Btw, Wikipedia’s data on the national park seems prehistoric – from before 2004! While it’s clear to the eye that a significant proportion of the infrastructure was installed long since then, i.e., to cope with much higher numbers of tourists.

The lines here – pretty savage. Elbow work is a must or you’ll be left behind. It’s survival of the fittest rudest. 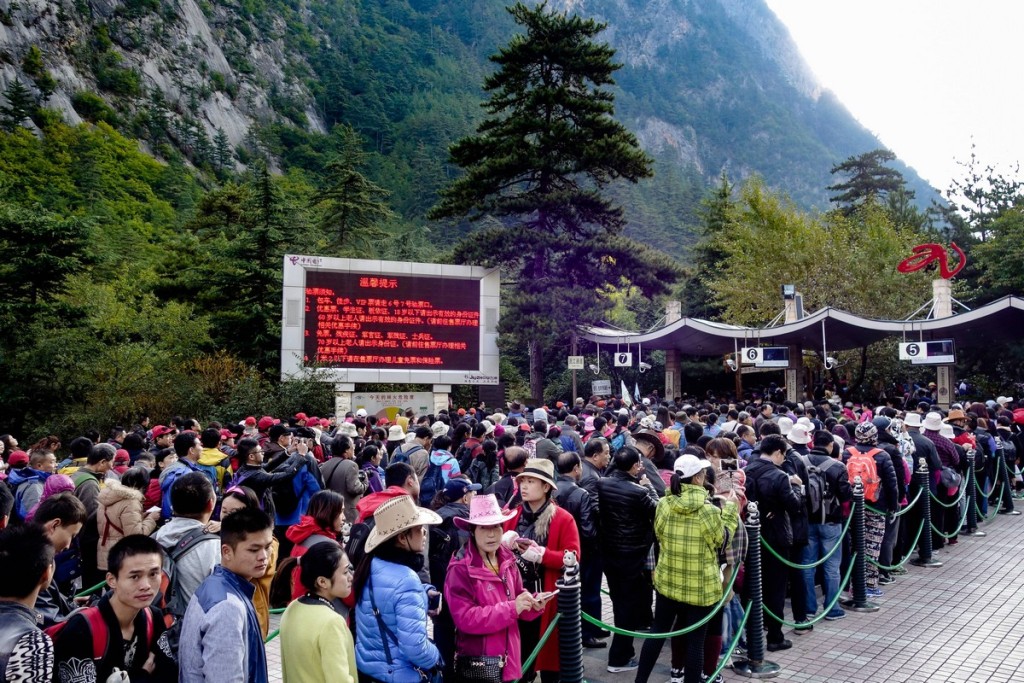 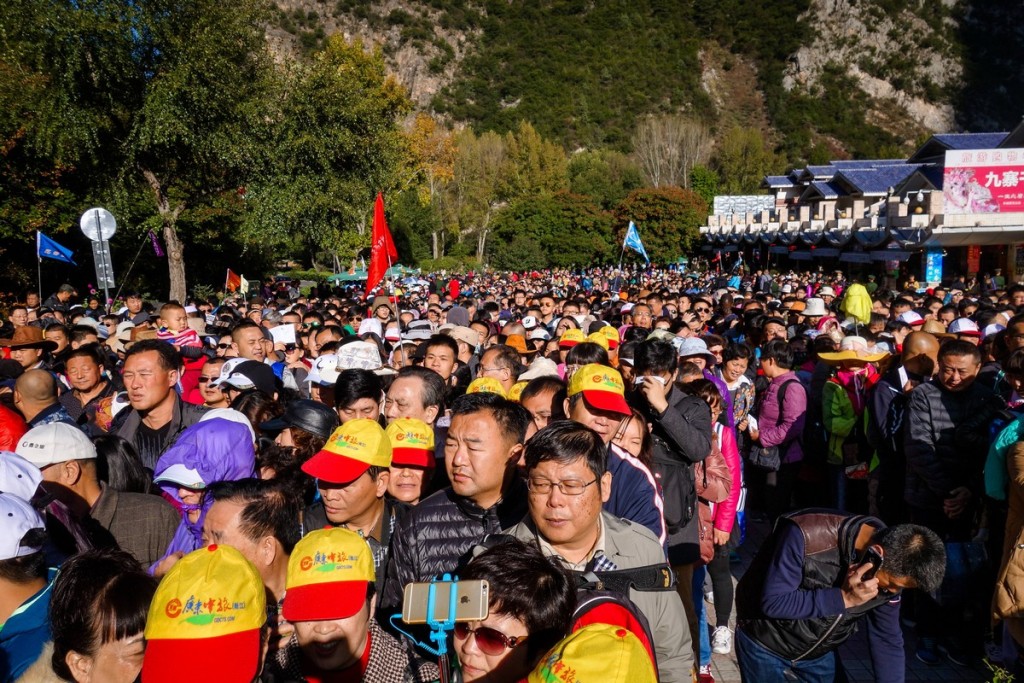 Around some of the natural beauties too (but not all) there’s also much crowd-pandemonium. But the Chinese don’t like to get about on foot – they prefer buses. This means that if there’s a crowd around a main attraction, you can bet that the paths by the road on the routes thereto and therefrom will be practically empty (as in some of the pics above)!

Once you’ve made it through the turnstile there’s the next problem to deal with – choosing which bus. For there are plenty of buses, and all running like Swiss trains, but… even the Chinese have trouble working out which one to go for. Imagine what it was like for us!

What else? Ah yes. Where to stay…

There are plenty of hotels, even a fancy Intercontinental, with huge covered glass lobby with mini-park, ducks, and restaurants, plus an amazing spa with pools of varying hotness and coldness. But! The air conditioner in the room rumbles like a coffee machine! I’d have turned it off, but the window and balcony door don’t open – protective measures against mosquitos. And the lock on the balcony door was broken anyway.

So that’s another amazing place discovered in hidden China. Some say this park is the main natural attraction of China. Having been and seen, I think I might just agree with them…

All the photos from Jiuzhaigou are here.