My pals and I love a spot of trekking in remote places around the globe. Just two or three days normally does the trick: enough to get in plenty of gawping at luscious landscapes, plenty of exercise, plenty of curiosity satisfaction, and of course plenty of pretty photography.

And our New Year trip to Ecuador proved no exception. With small rucksacks on our backs (and accompanied by horses carrying the larger items like tents and so on) we walked along a lengthy stretch of the Condor Trek.

The main attraction along the Condor – the Antisana volcano, just over 5700 meters high. 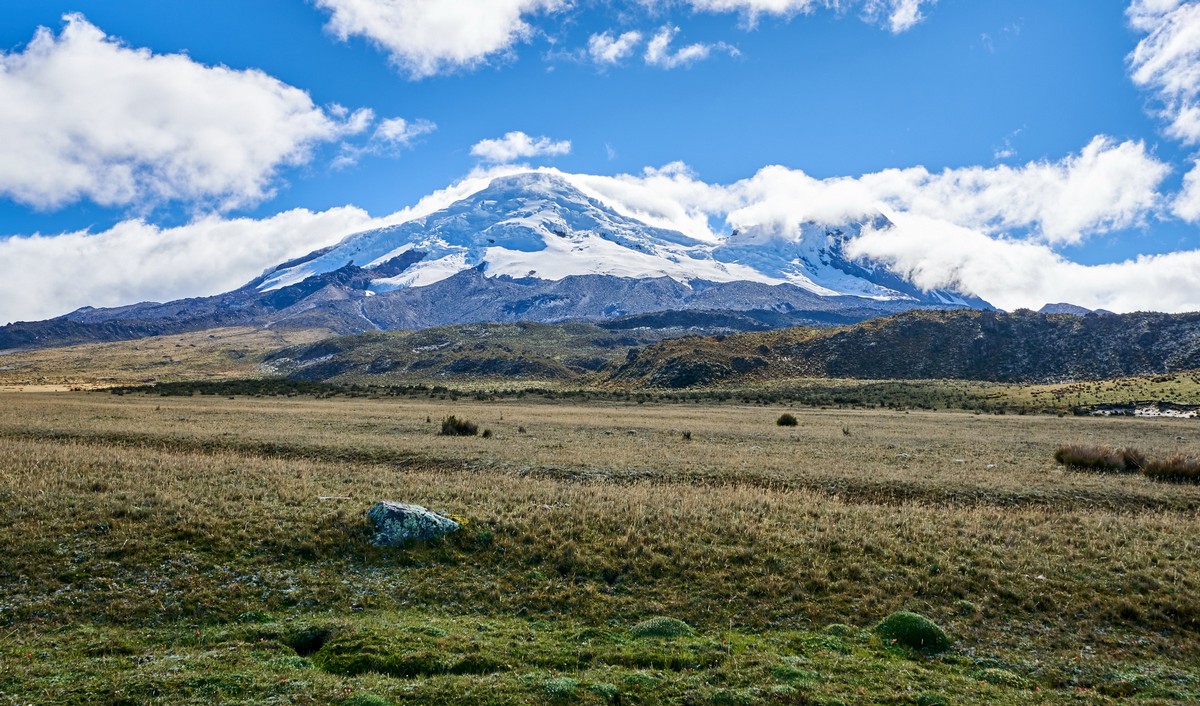 Wow, it gets cold – and steep up there toward the top. And to think… some folks climb up to that peak!

Perhaps noticing our shock upon viewing the extreme conditions up there, our guides told us how folks can get to the top via a rather easy-going path that goes right up to the crater (obviously from the other side). Alas, we didn’t have the time for that – at around 6000 meters we’d have needed several days to acclimatize. We’ll have to leave that adventure for another day.

This time, we were walking exclusively along the west side of the volcano.

Woah – a flight of a condor on the condor trek! At least, I think it was a condor. Might it have been some kind of eagle? 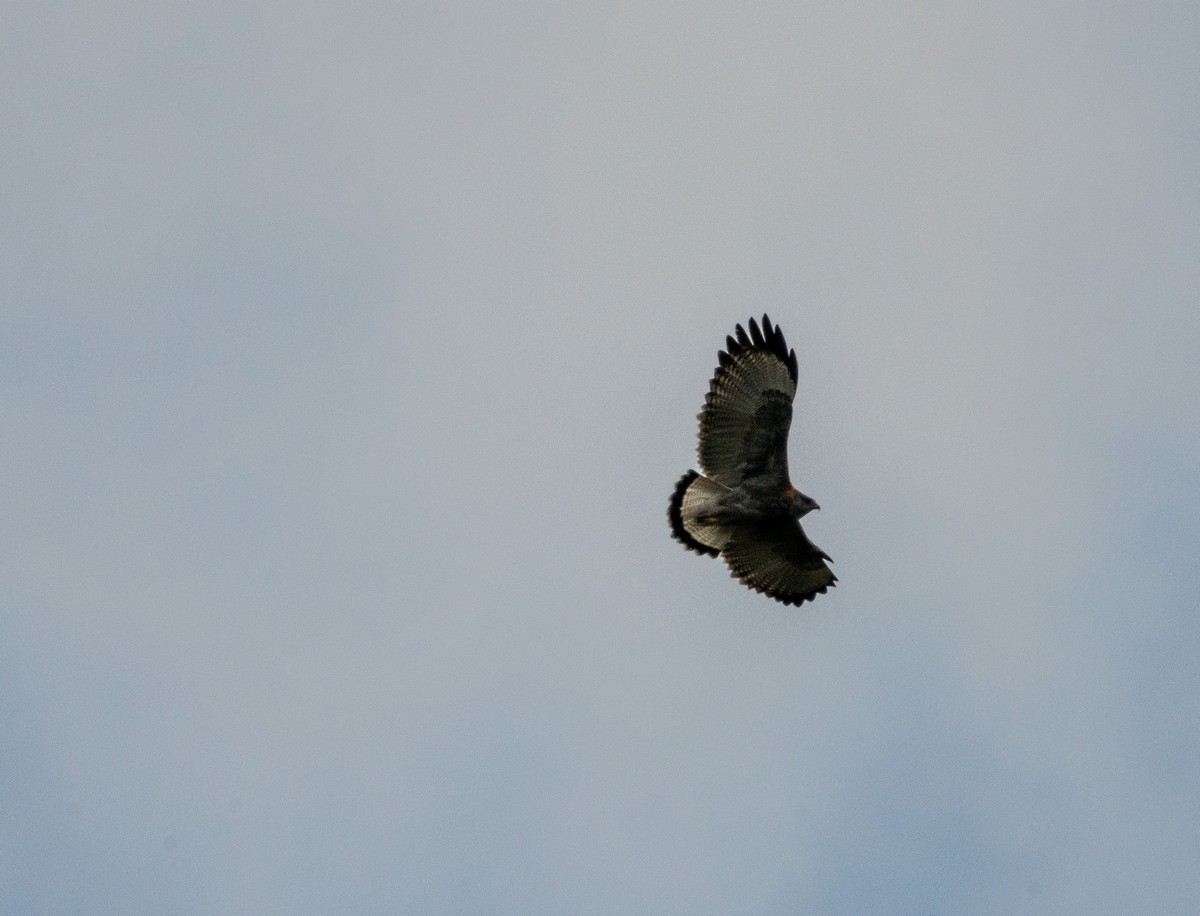 It turns out the Andean condor is a New World griffin – a vulture. But its size, wingspan, stamina, and distance-and-altitude capabilities are very impressive: it flies up to 7000 meters above sea level (a kilometer higher than the Andes’ volcanoes, or as high as a plane), and can fly a full 200km in distance!

Well, it was time to get off the bus, stretch the legs, and set off along the Condor… 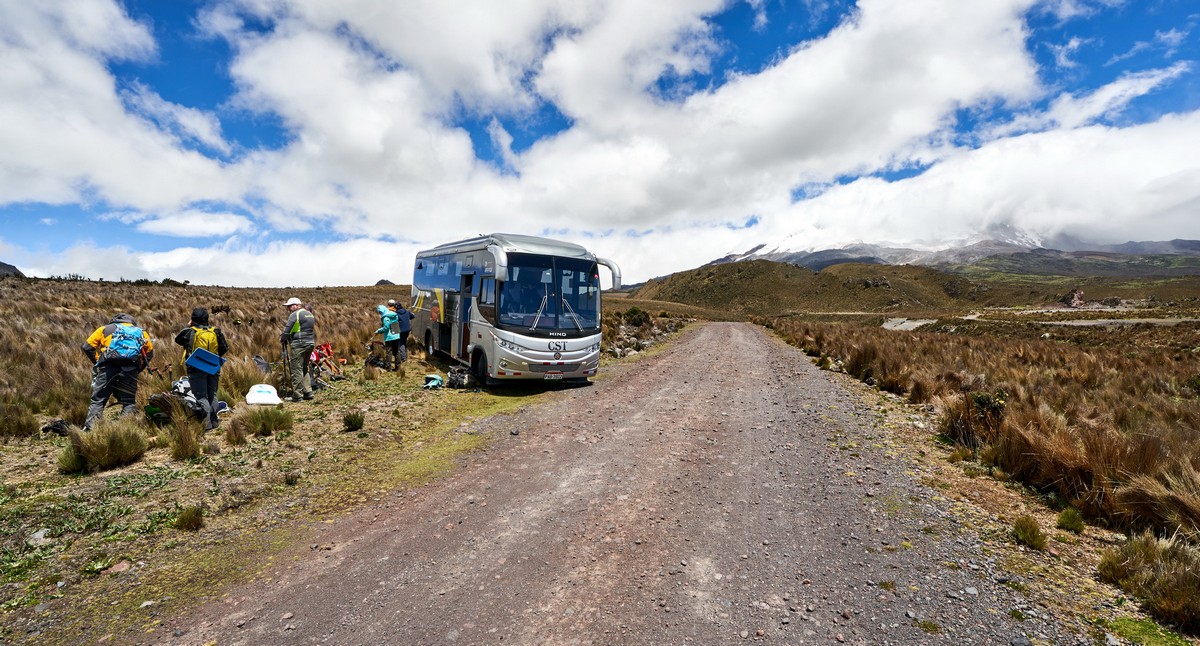 At first the we were walking slowly. The bus had stopped at around 4100 meters above the warm equatorial sea level below, so quick marching was hardly advisable. Some of the group felt a bit poorly on that first day of walking. I was ok then, but the following day it caught up with me – mild altitude sickness. Btw – our altitude was that where the Páramo ecosystem thrives: 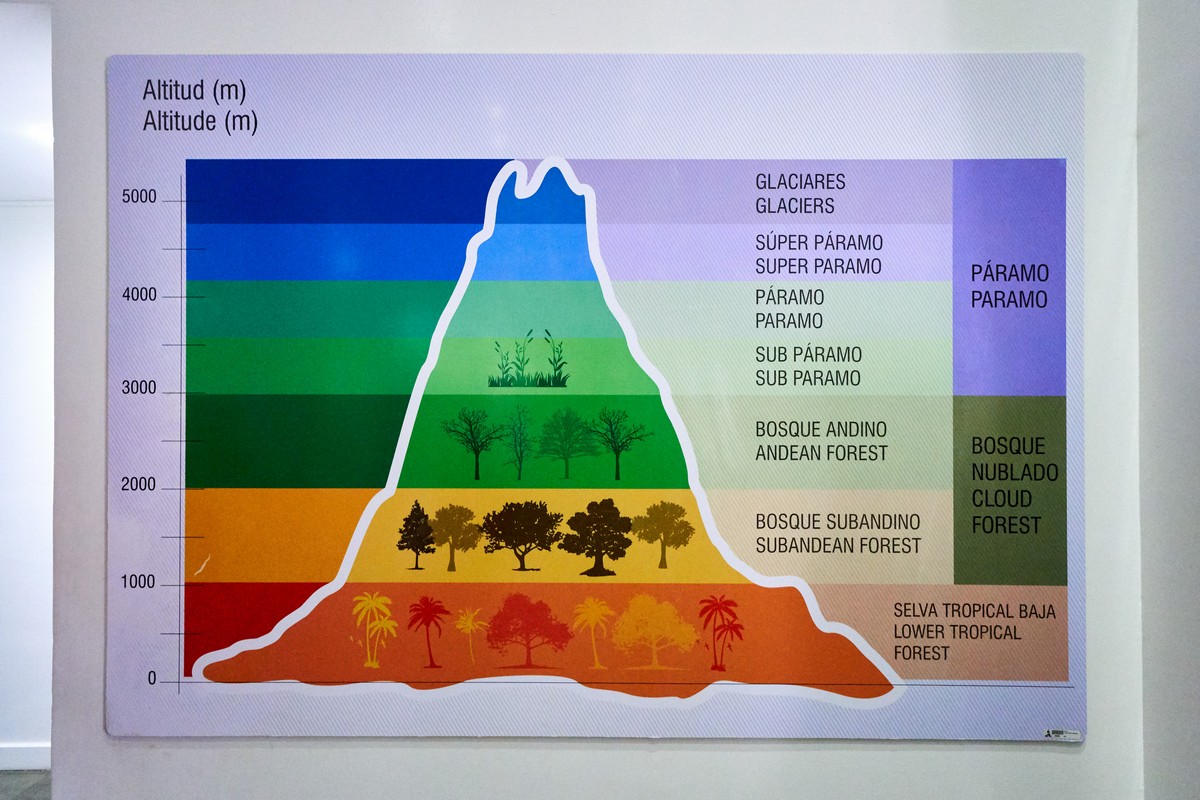 Our first day’s trek stroll was just a few kilometers in long – from the bus to the camp where we stayed the night. Up went the tents, we had dinner, a few photos of the sunset, and early to bed.

Good job our sleeping bags were polar-ready ones – overnight it was freezing, as our eyes confirmed in the morning:

Wasn’t expecting Ecuadorian equatorial camping to look like this, that’s for sure:

DZ was up first. “Get the kettle on!” 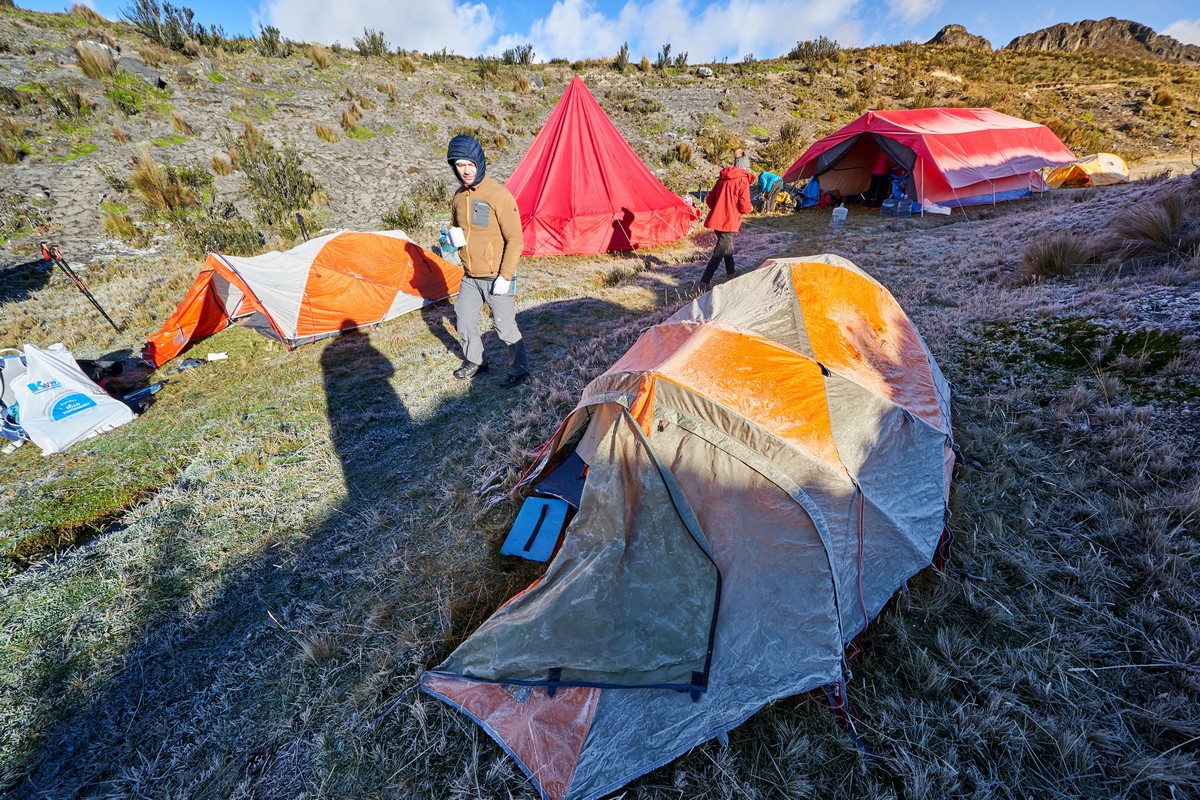 The sun rose not long after DZ did, mercifully warming both us and the mountainside up – brightening our mood too…

Backpacks on; off we go!… 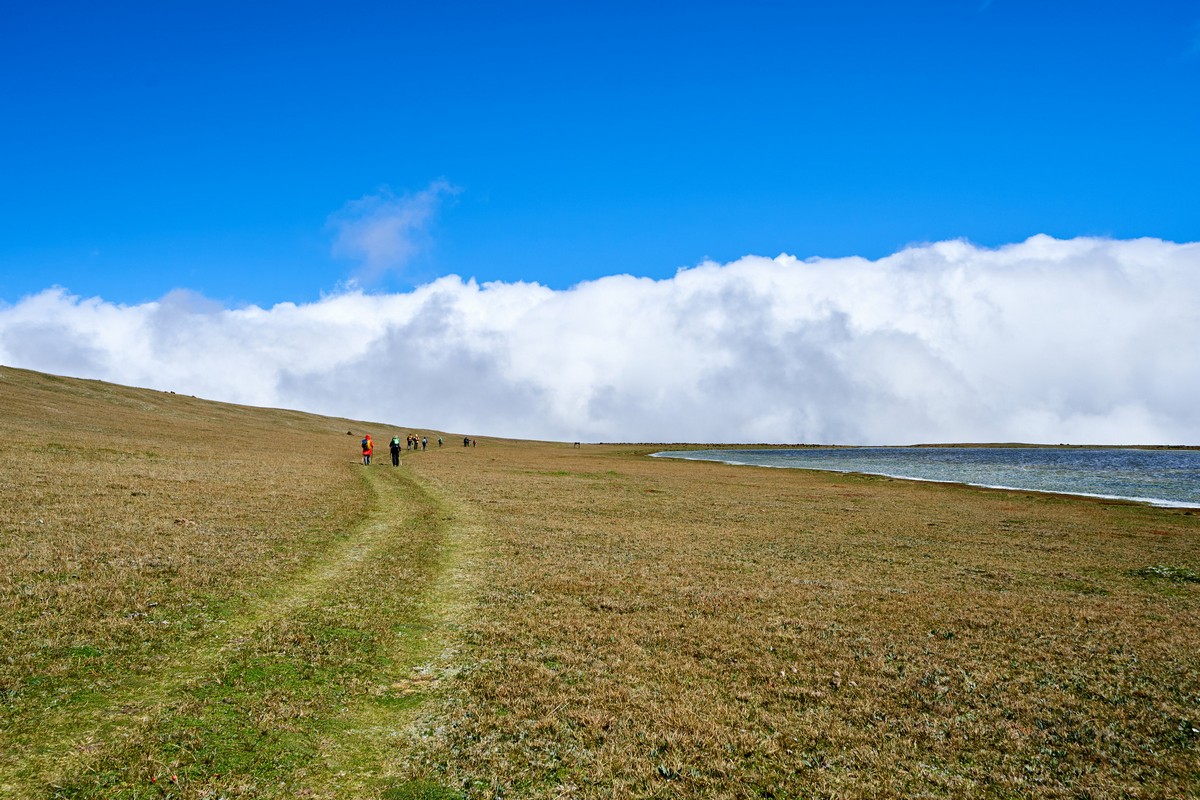 Our walk took us up a little in altitude, heading for a mountain pass at around 4300 meters, and that’s when I started to feel a bit queasy with altitude sickness. Thankfully, after the pass, we descended somewhat, easing the sickness the further we went – incidentally in the direction of that there lake that came into view: where we’d be spending the second night. 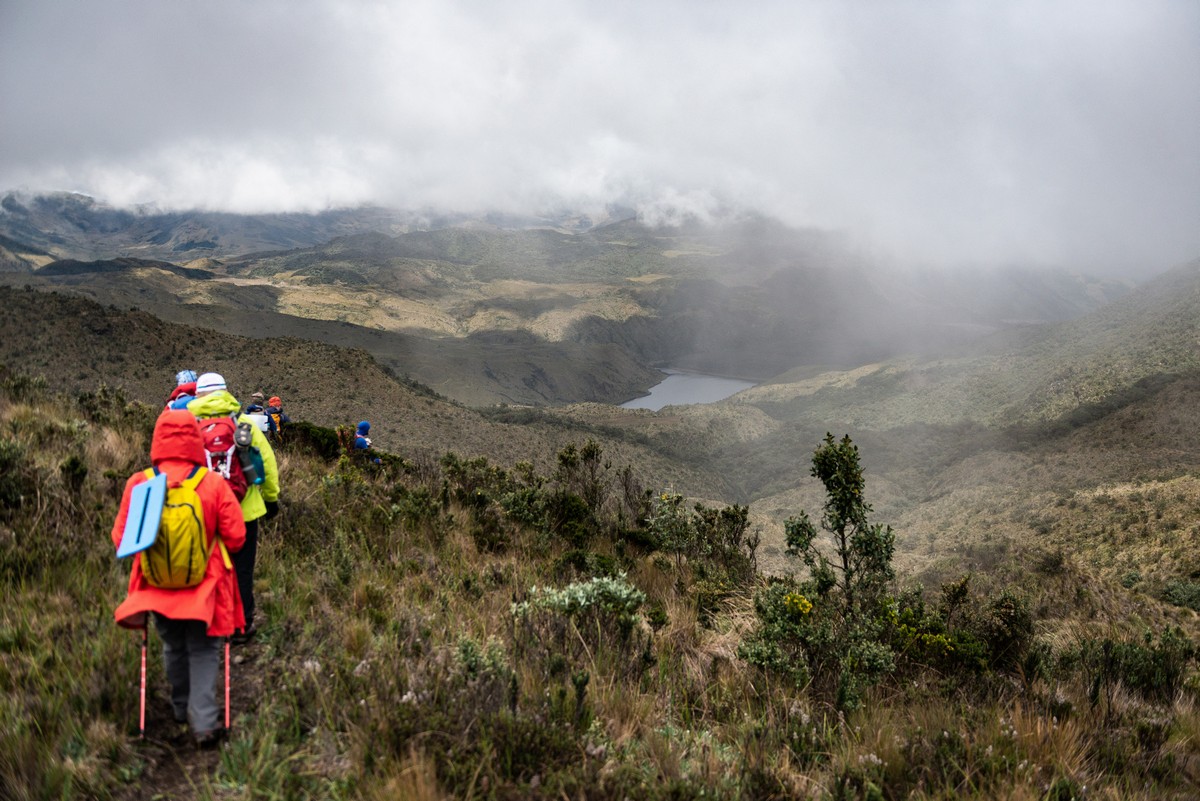 Btw, the lake also has a volcanic origin. If you look at the pic below, it’s the result of a lava-dam: 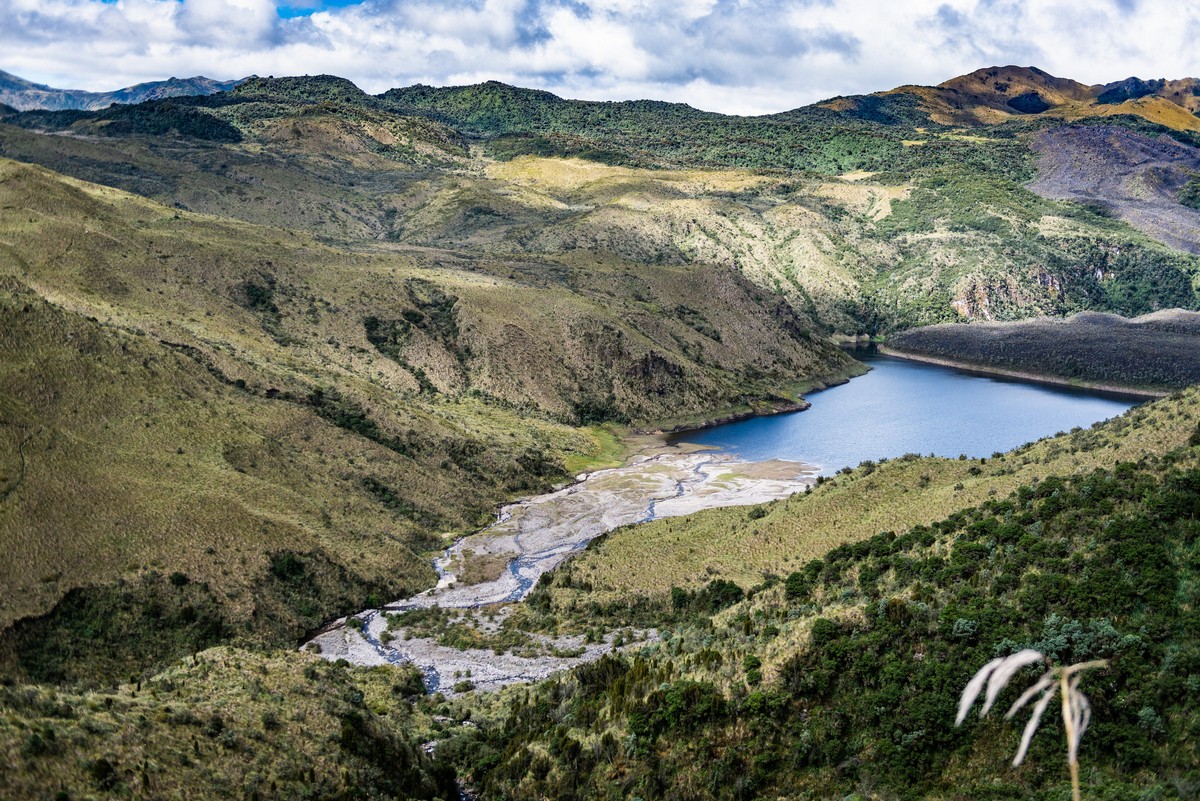 Perhaps one or two hundred years ago there was a mini-eruption here. You can tell it wasn’t longer than that by the fact there’s still nothing growing upon the lava. Anyway, the lava dammed up all the streams, thereby creating the lake.

We finally made it down to said lake, which, incidentally is situated around 3600 meters above sea level. Aha – that makes this… [splashing into the lake in my trunks] my new record-highest swim!… 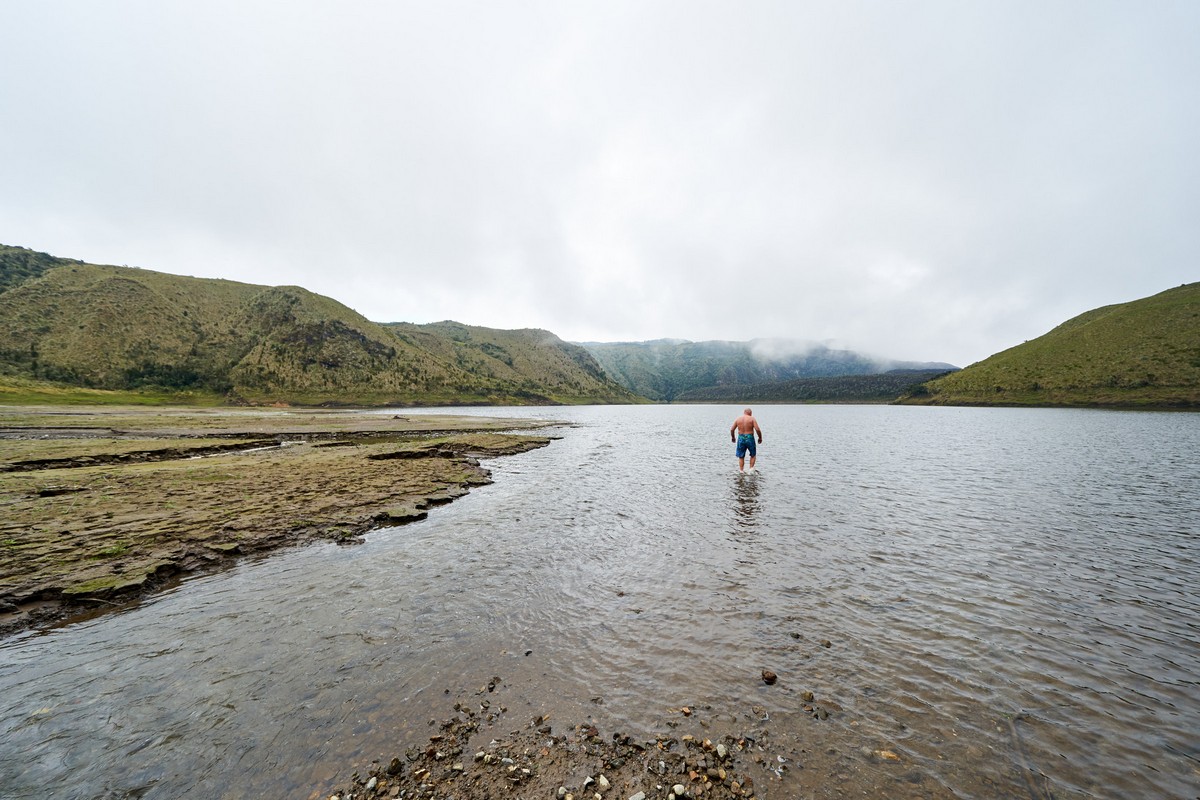 But wait! I spoke rejoiced too soon! Out I forayed into the lake… further… more… still further – and still the water only came up to my shins. Nooooo! The whole lake is like that – real shallow! Aaaaarrrrgghhh. In short, no high-altitude bathing, no record; mood blackened!

Well, well. That’s another ‘wasn’t expecting that’. Brown bears? And I thought they mostly roamed in Russia’s Siberia and far east? Turns out they have relatives over here too, which no doubt look just the same, like these: 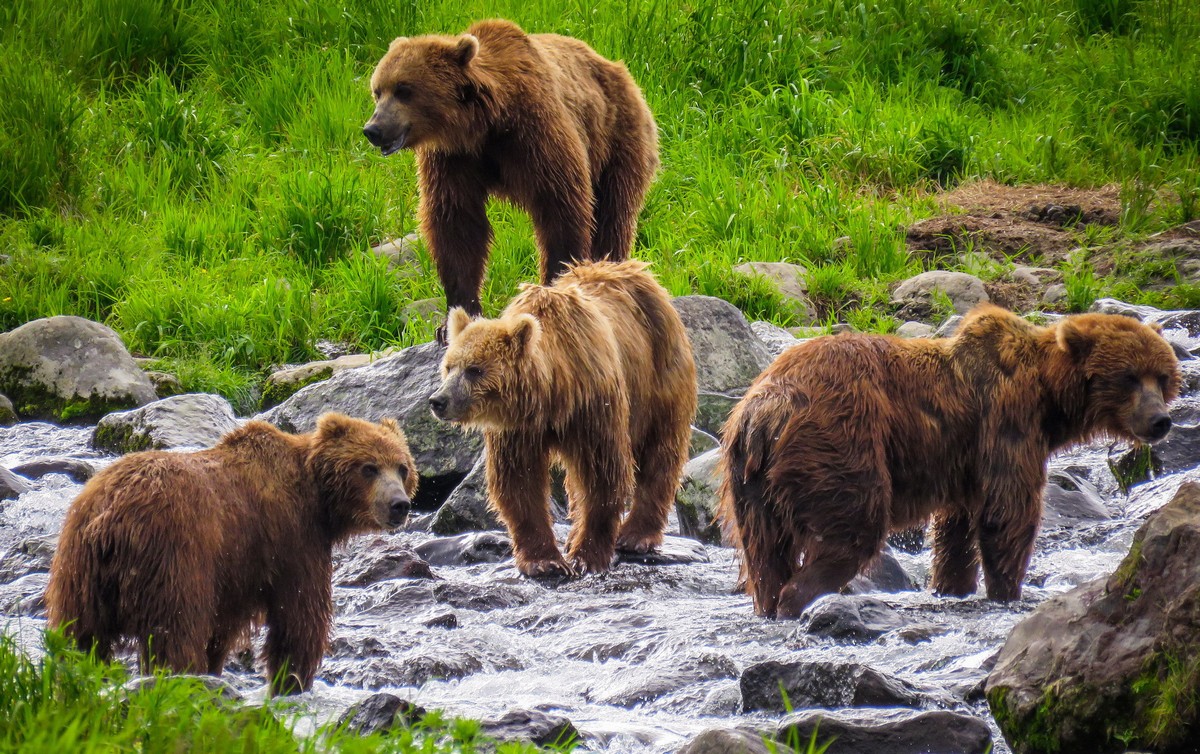 (photo taken in August 2018 in Kamchatka)

In fact there are different kinds of grizzlies. There are Himalayan brown bears; there are polar bears. All of them are hard cases, hunters, hooligans. Example: 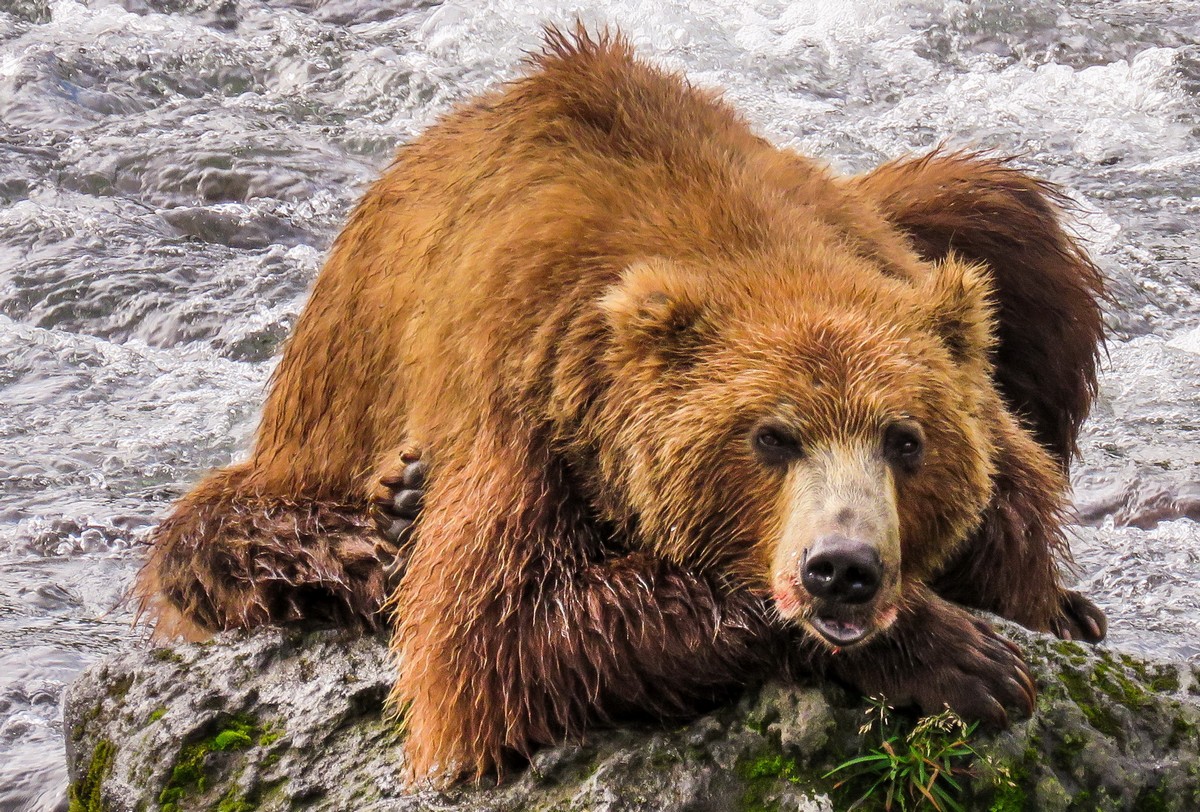 They eat anything. Running away from them is futile – and dangerous. A runner is like a red rag to a bull; instinct tells the bear – ‘victim: kill!’ And they run fast too. Have a look on the internet: scary!

However, there are other bears that wouldn’t say boo to a goose. Chinese giant pandas for example: 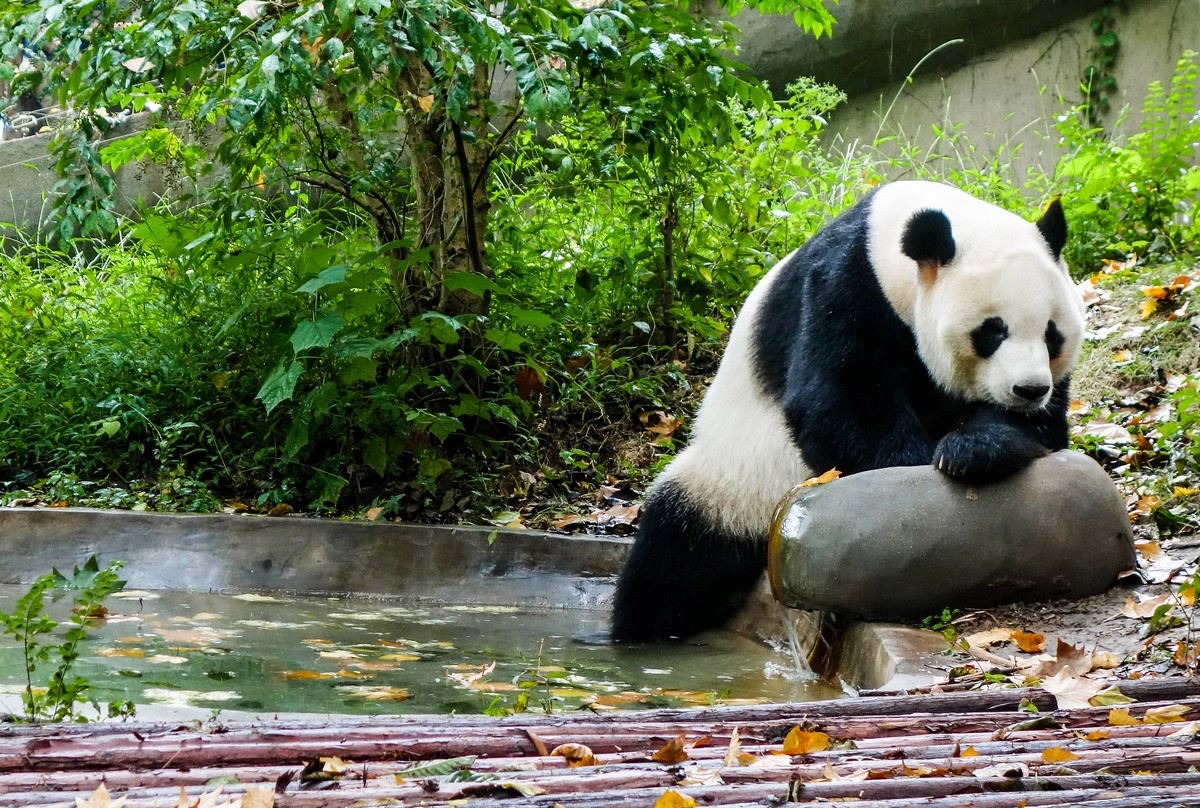 (Photo from Chengdu Panda Base)

Vegetarian. Eats and sleeps. That’s about it! More first-hand accounts of these cute sleepy-heads – check out the link just above.

Hard to imagine the fierce carnivore predators and the cute slothful pandas come from the same primal ancestors – who lived some 20-30 million years ago.

Hmmm. That got me thinking…

I wonder how Pandas ended up vegetarian – a trait that seems so un-bearlike it’s untrue. It’s hardly that their consciences got the better of them and they all suddenly decided: ‘no more animal cruelty due to our eating animals for their meat’. How does a species get turned off the diet they were ‘given’ by nature? What happened?

Anyway, turns out the panda isn’t alone when it comes to vegetarianism within their species. The Andean bear, aka the Andean short-faced bear, aka, the spectacled bear, isn’t a meat-eater either. At least – that’s according to our guides; the internet begs to differ – attributing omnivory to them. And what they eat (according to the locals) – is high-altitude cactus! (Woah. A whole Castaneda-meets Jack London novel waiting to be written there!). But, like, why cactus – those normally prickly things that prick paws and tongues, and which surely don’t taste much good?

I reckon one ‘why’ is the abundance of ‘cactus’ here (as our guides called them) or agave-looking plants (which is what they looked more like to us). Some of the plants had been bitten and gnawed at. ‘Bear!’ our guides intoned. Some time later the same utterance: ‘Bear’ – but this time with a pointing gesture too: over there – BEARS!

Not that we needed to feel alarmed: they’re very timid creatures, and ran a mile upon seeing us. Again – how did that happen? What made them so shy, gentle and veggie – just the opposite of their distant cousins in Russia’s far-east? 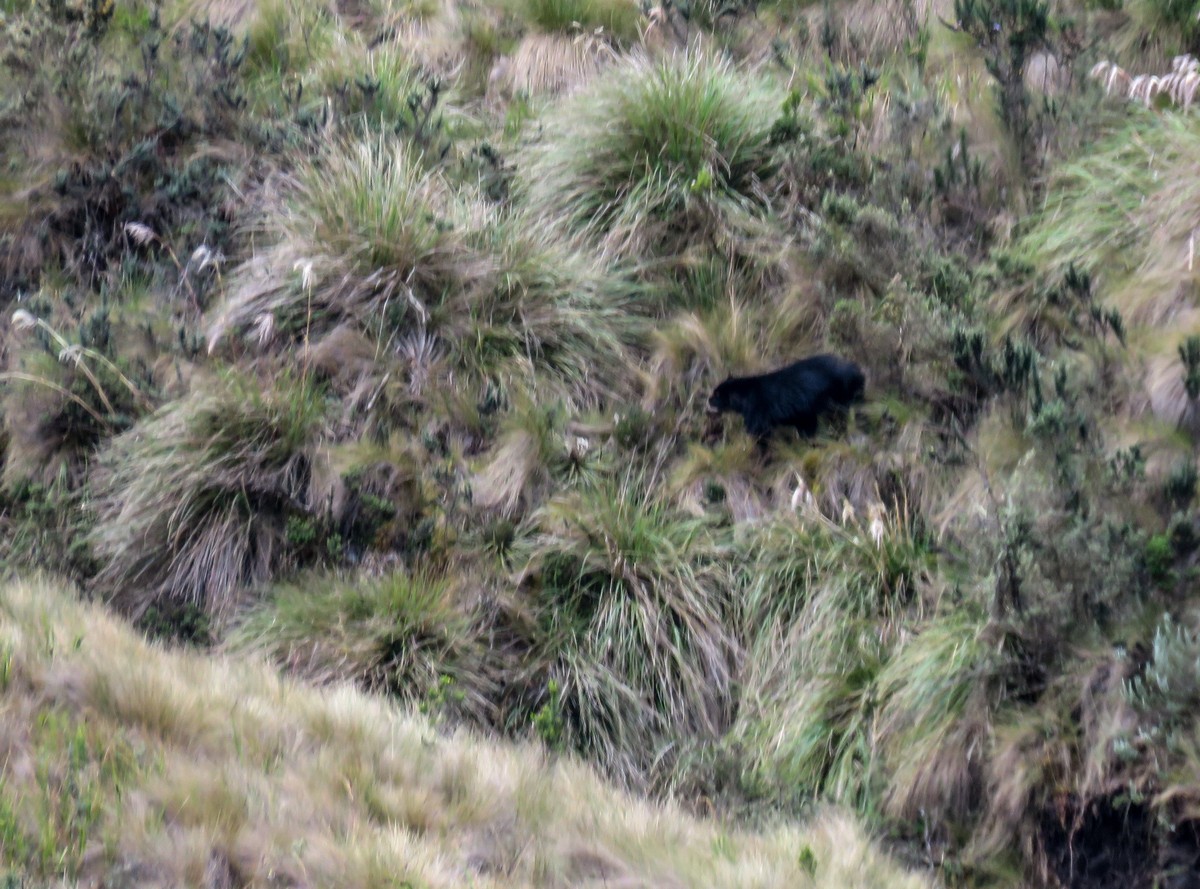 But I digress. Back to our three days of the condor…

Though it’s claimed it’s the best walk there is here, we were rather underwhelmed. Ok, us lot – we have been spoiled – visiting places like Kamchatka, the Kurils, Patagonia, Indonesia… some of us New Zealand, etc. I guess we just wanted the natural beauty to be off-the-scale and all in one spot. Antisana is impressive, but that’s about all that is. 4000m up – tricky for an office dweller; in places – mud and sludge; in others – barbed wire. Grrrr.

In short – interesting place to visit, but not remarkable . But that’s just my opinion, I guess.

My mood brightened somewhat as we returned to the bus. I was reminded it was New Year’s Eve – and we had our lovely lodgings to get back to for our New Year celebrations!…

That’s all for today folks. But I’ll be back here tomorrow for a quick French intermission before I continue my equatorial Ecuadorial tales…

All the pics from our Ecuador trip are here.