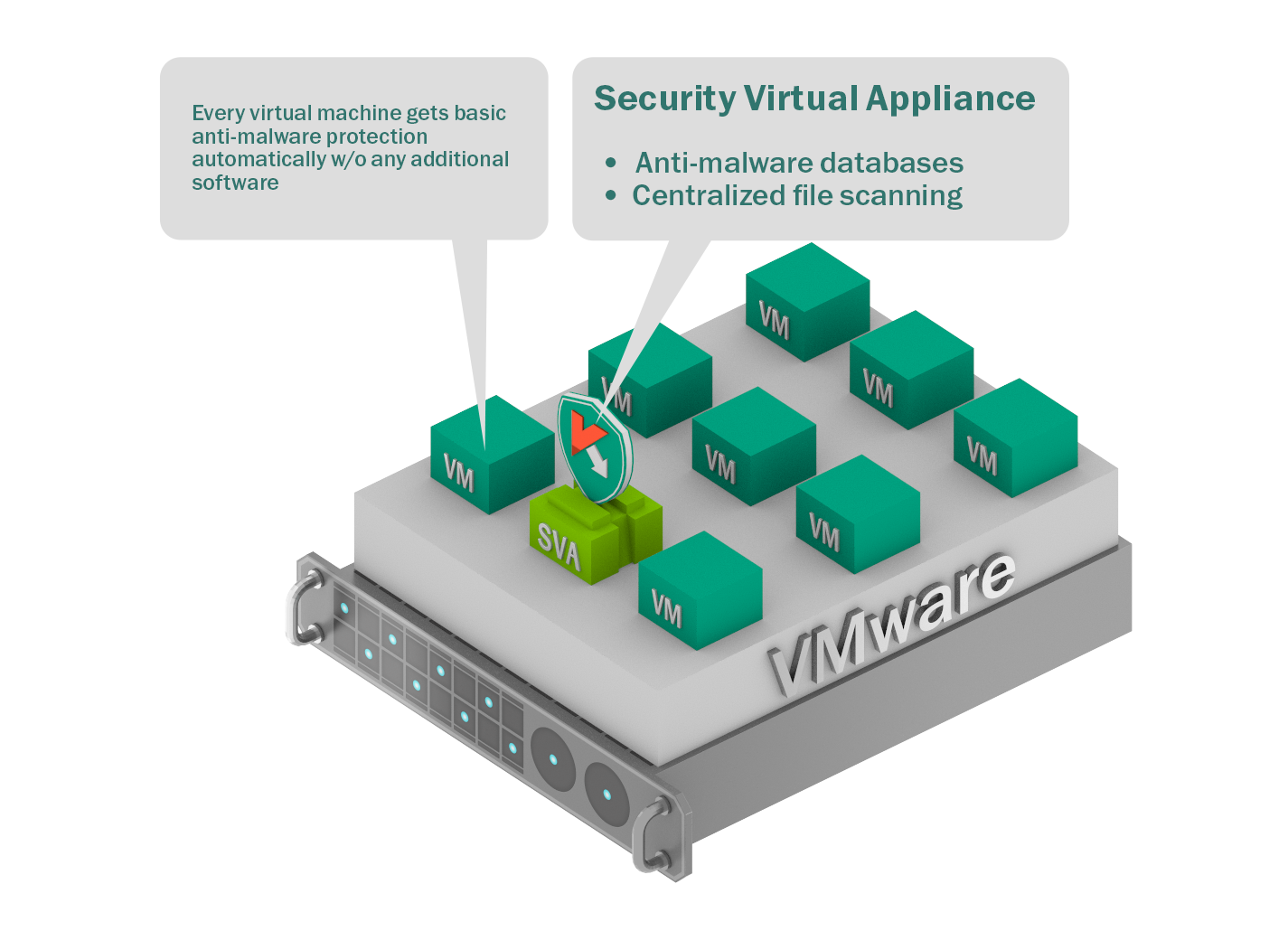 It sounds like a panacea, but the agentless concept has one principle deficiency nuance – limited antivirus functionality, i.e., the vShield interface permits only basic file scanning. That is, it foregoes all the following progressive protection technologies: Application Control, System Watcher, whitelisting, heuristics, device control and web control. In fact, it turns out the file scanning is also restricted: no quarantine for suspicious files, and access neither to memory nor computing processes.

VMware vShield was not designed to deliver full anti-malware protection. Instead businesses can use light agent implementation

With this approach, a light (i.e., light on resources, small) agent (aptly called Light Agent:) is installed on every protected virtual machine. This agent replaces vShield and connects the virtual machine to the antivirus engine that resides on the Security Virtual Appliance.

We thereby remove the limitations of the VMware interface by adding the full arsenal of our defensive technologies. At the same time we keep the advantages of the agentless approach: a moderate appetite for resources, manageability, and stability against ‘storms’ (bottlenecks caused by simultaneous antivirus database updates or malware scanning across many machines). 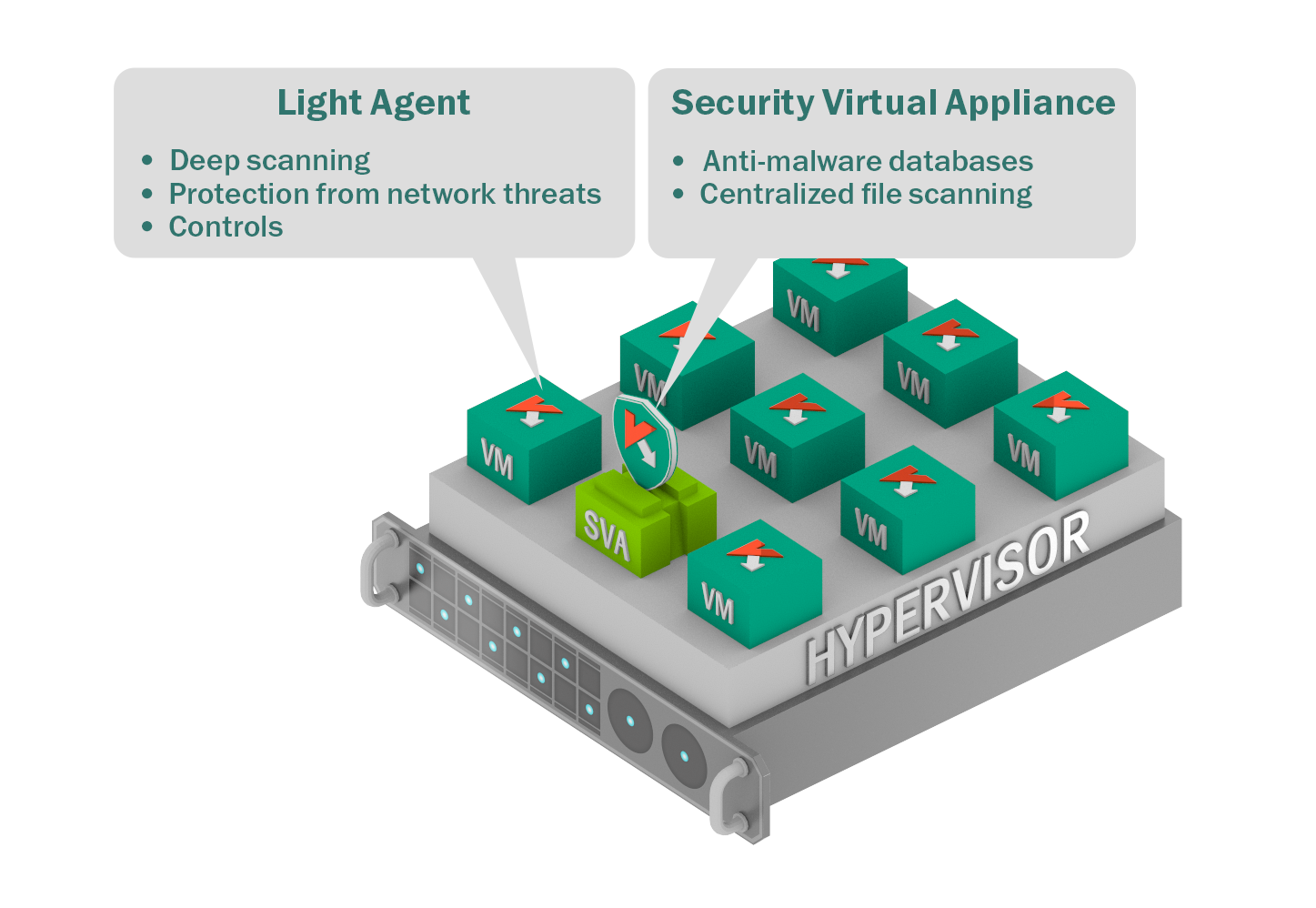 Security Virtual Appliance protects all the other virtual machines (like above, with Agentless)
+
A small – ‘light’ – application on every virtual machine giving full access to all security technologies

Despite the name, Light Agent will still always be ‘heavier’ than an agentless solution, for it requires some memory on every virtual machine, processor power, and other resources. Nevertheless, with today’s computers’ mega-horsepower, Light Agent’s appetite is relatively meager. There’s also a bonus: some standard AV tasks using this approach can be performed quicker than Agentless. But the main thing is that, given the increase in the quality of protection when it has all bells and whistles on – Light Agent clearly becomes quite the contender.

But what happens if you want to protect data on non-Windows virtual machines and take advantage of the full range of protection technologies, including cryptography? That’s when…

Sure, it will be problematic on the whole to fine tune such a setup given a sprawling virtual infrastructure, and maintenance and upkeep of such a solution will sure take up more human resources, but sometimes there are situations when such an approach is appropriate. 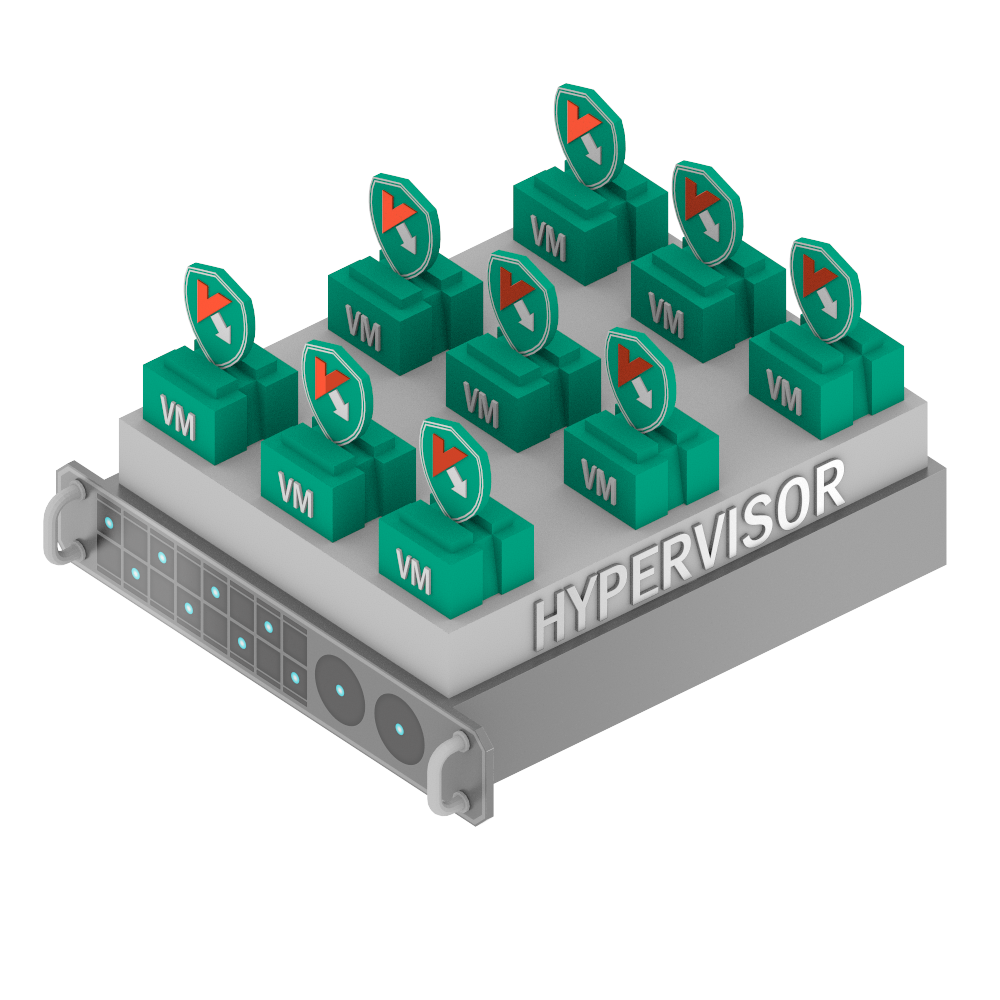 Each VM has its own dedicated endpoint protection installed

Ok, theory over; now for this tech in practice…

// At the same time I’ll modestly promote the new version of our product for virtual environments ).

Recently we released KSV 3.0. And we really do have something to be pleased overjoyed about.

First, in addition to VMware we now support Citrix XenServer and Microsoft Hyper-V.

Second, in addition to the agentless solution for VMware, now there’s also a solution with Light Agent for all three platforms!

Moreover, all products are managed and controlled from a single console, which is especially important for multi-hypervisor environments – so as not to create a messy hodge-podge of consoles.

Kaspersky Security for Virtualization now supports VMware, Citrix Xen and MS Hyper-V, and can be agentless or light agent

So, what are the above three approaches each best suited to?

Well, generally speaking the reasoning that goes into the choice of protection goes like this:

For maximum, high-performance protection of a Windows guest OS a light agent is needed. On other operating systems (Linux, OS X) – a product for endpoints is better; however, alas, application is limited by considerations of productivity and the antivirus’s interaction with features of the virtual environment itself.

We are currently working on support of light agent approaches for other OS . In the meantime, if productivity is critical, data value and service value are not high, and access to data from outside the organization is limited – then an agentless solution is suitable.

We analyzed typical application tasks using virtualization and came up with this curious table:

* – Data Value – Dependent on the amount of personal, financial, commercial or other critically important data
** – Service Value – Assessed as per the importance of uninterrupted service for the business

The above table is neither an exhaustive nor unambiguous presentation of how the three different approaches to virtualization security are suited to different environments. Organizations change, priorities change, IT configurations change, budgets change… The aim of the table is to convey the pattern of threats and the methodology for assessing tasks and priorities. More details are available here and here (PDF).