Yes, yes, it has been a while. But of course there can only be one reason for that: I’ve been busier than ever, despite the pandemic! Ok, unnecessary humble excuse over with – let’s get on with this post )…

All righty. You’ve probably seen an Instagram or two of me out in the crazy-cold climes of the Russian Far East earlier this year – or maybe not. Whatever, the time has finally come to get past the canapés, and onto the hors d’oeuvres: the intro-post on my recent race across Russia – my winter wonder-Far-Eastern cross-Russia road trip, which started out along the R504 Kolyma Highway from Magadan (further east than Japan!) and ended in Moscow weeks later. The journey turned out to be action-packed, a whole lotta fun, and of course rather extreme given the intense cold. But I don’t think any of us was quite expecting a magical world of endless, mostly straight roads cutting across vast white expanses of severe steppe or forested undulating hills stretching as far as the eye can see. It goes without saying that all fellow travelers were suitably spellbound and hypnotized by the experience.

Being so far north, and the time of year being the middle of winter, the sun hardly ever rose at all from its slumber; but this imbued the icy landscapes with a paradoxically warm golden glow for much of the day like nowhere I’ve seen before: 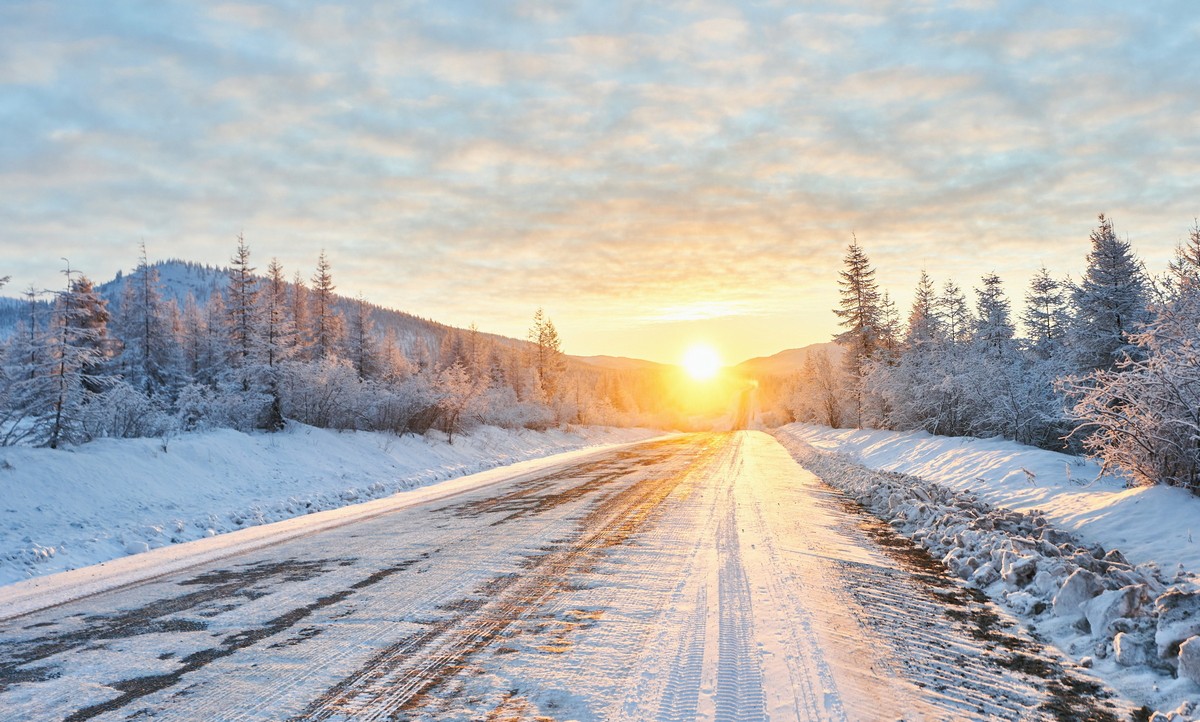 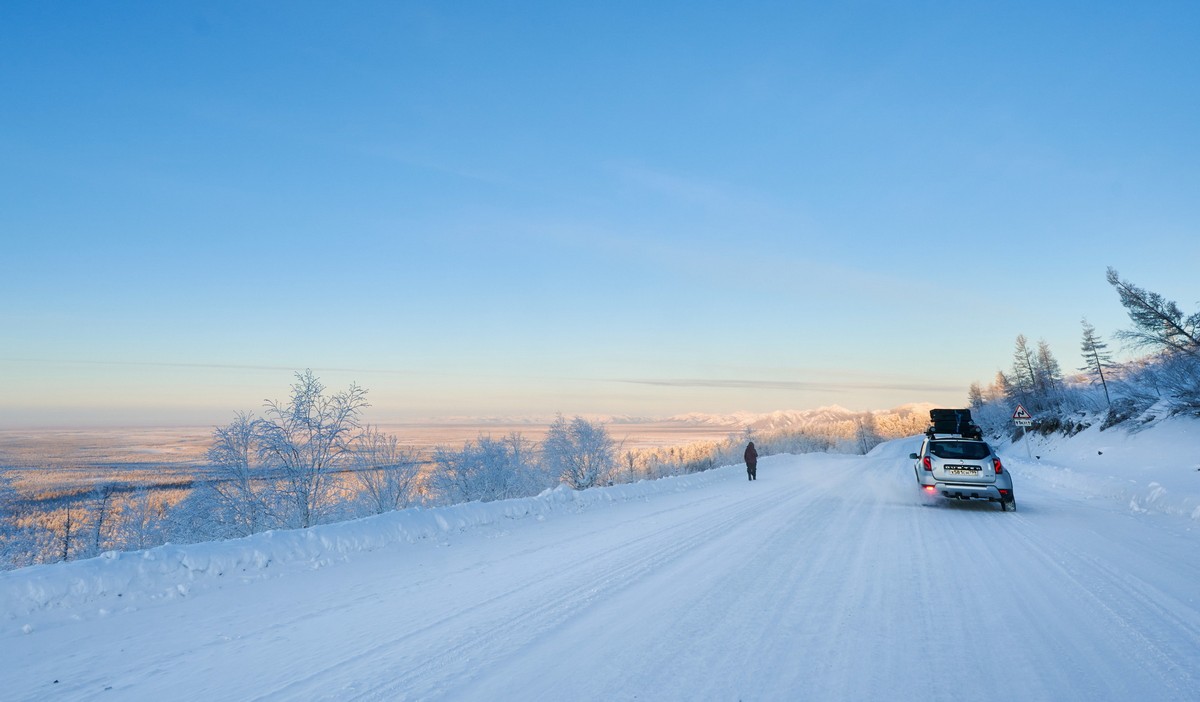 Everything covered in either snow or hoarfrost – or both: 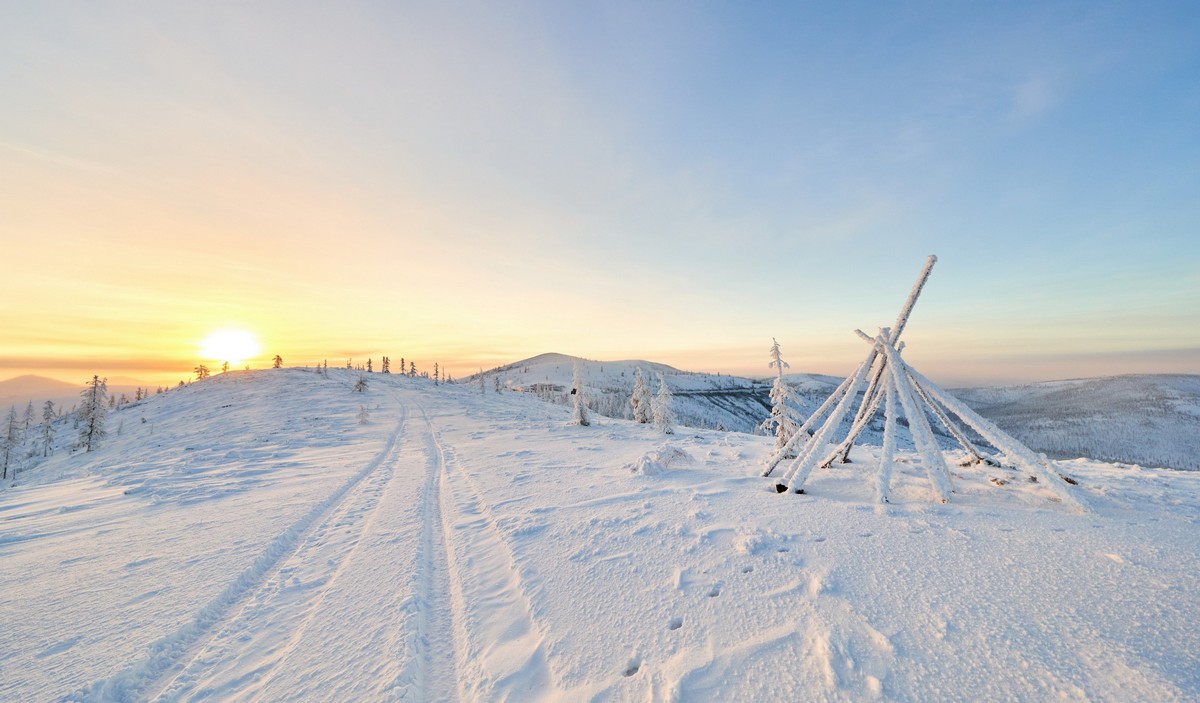 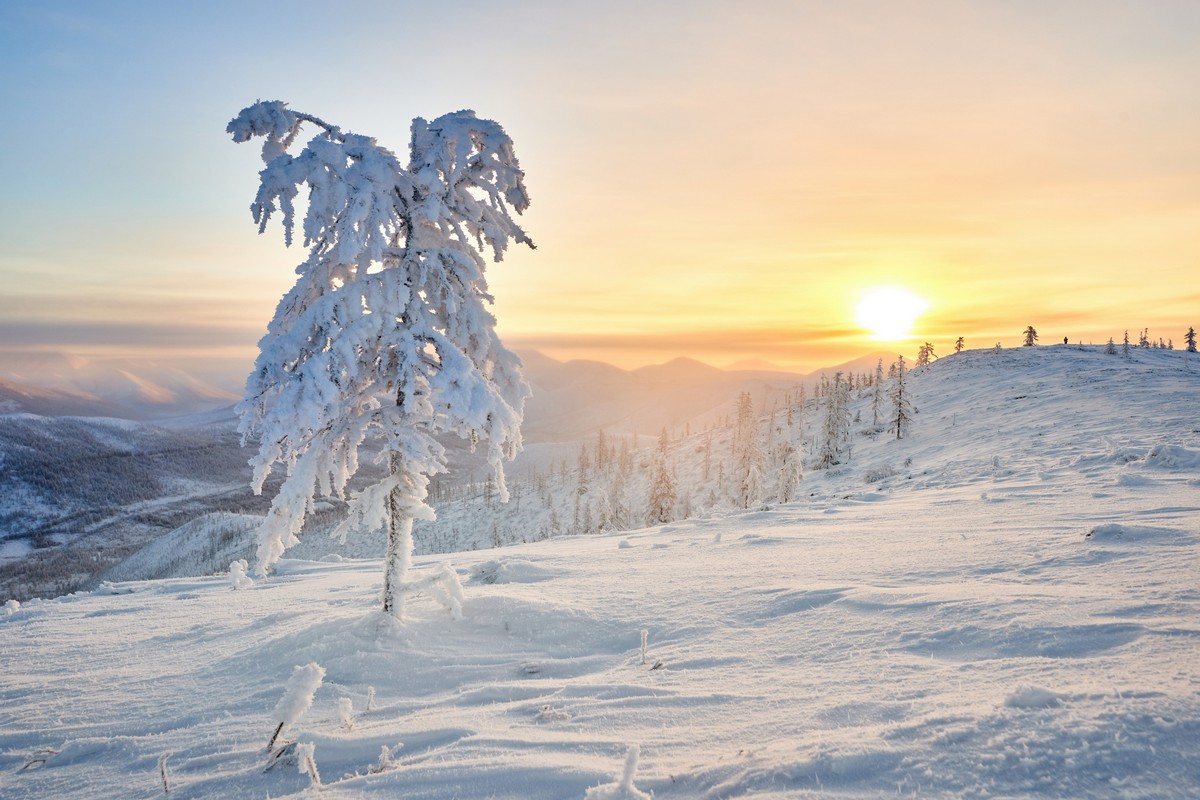 It’s frosty inside mountains as well – just a touch! -> 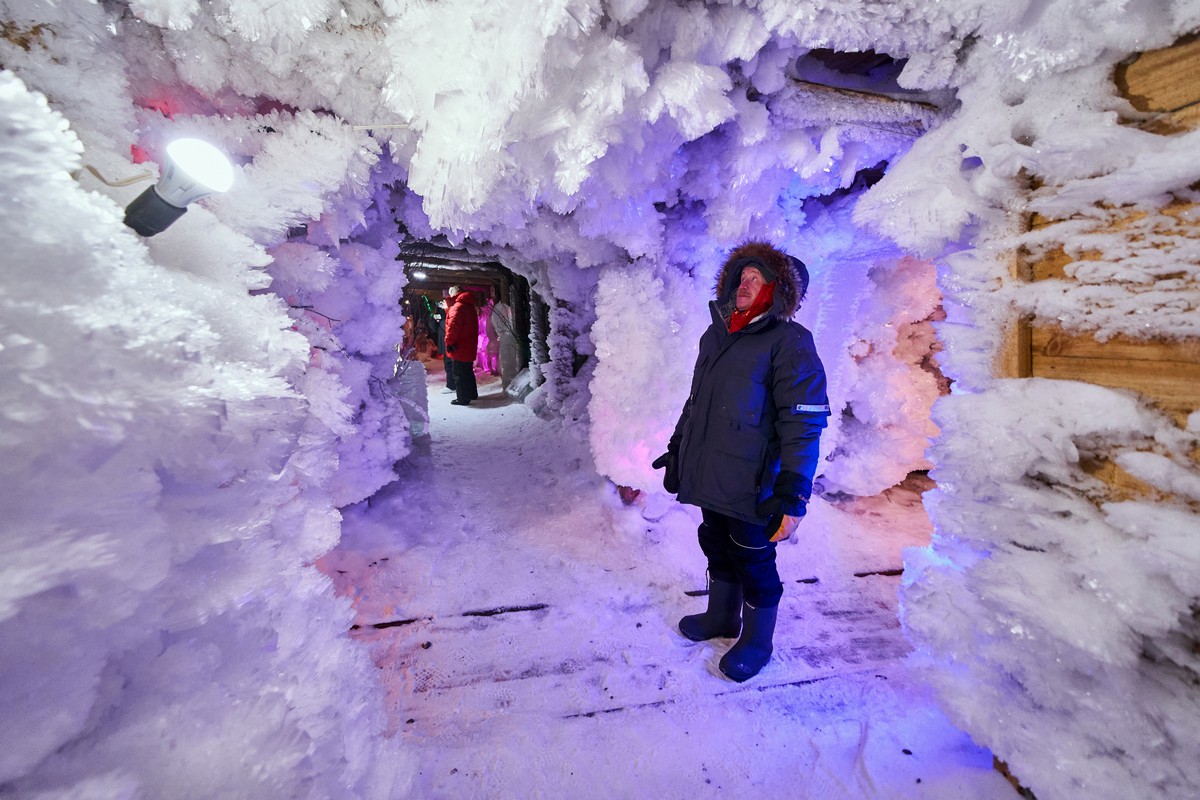 Amazement after amazement; not only for us… 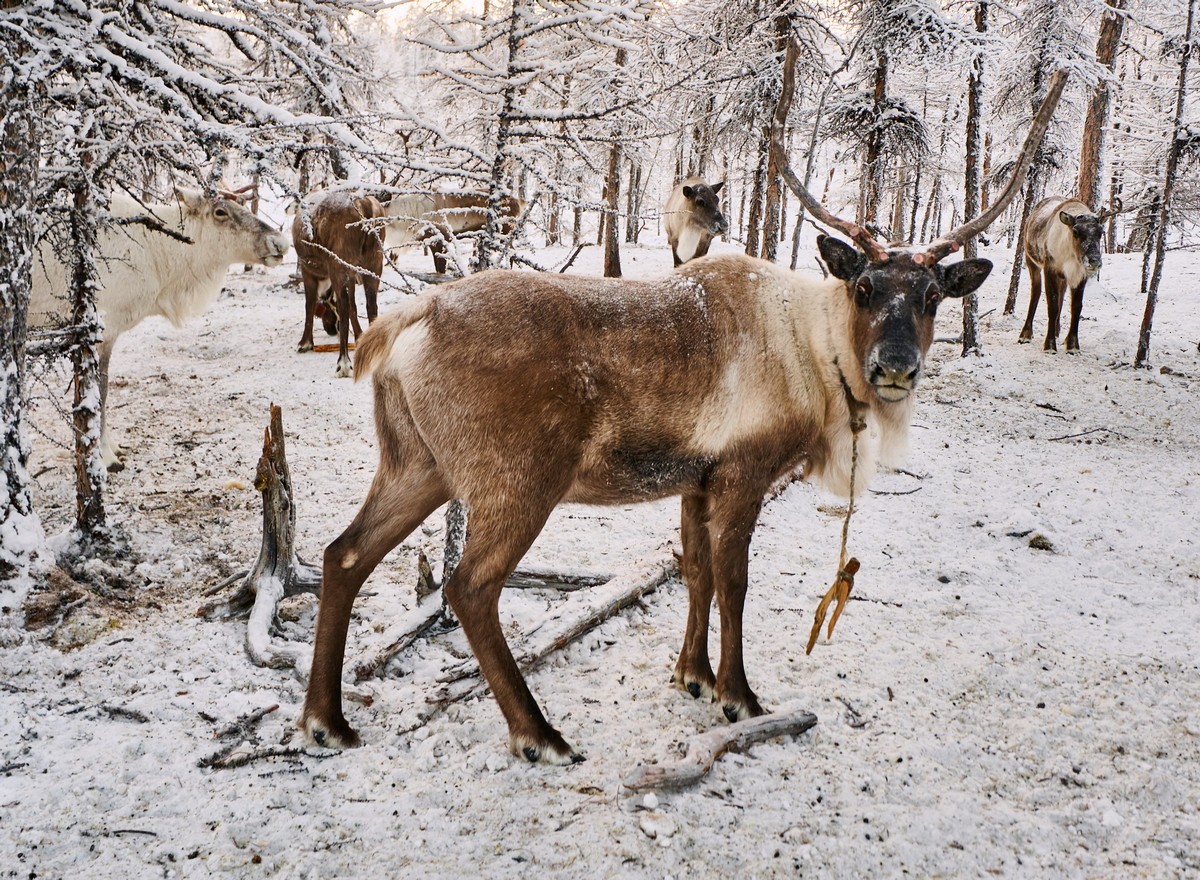 So, like, what, in the devil’s name, gave me the idea of a road trip in such a far-away, forbidding and freezing corner of the earth in the first place? Elementary, indeed, dear Watson: because of the horrid bio-virus still running rampant all over the world and, due to it, every darn thing being closed. As a result there’s very little of my usual globetrotting and continent-hopping going on. Originally for January of this year we’d been expecting to be expeditioning around Patagonia (been; want more) and the Atacama Desert (in my Top-100, but still not visited yet) – at least, that was the pre-corona plan. Of course, that plan – torpedoed. So we had to come up with an alternative closer to home. So I looked through my archives and asked around among my traveler friends about where we could get ourselves to in Russia this winter. And several options were suggested, among which was Oymyakon – said to be the coldest permanently inhabited settlement on earth.

Now, this village, though tiny (and literally in the middle of nowhere), is quite famous, at least in Russia, due to its ‘world’s coldest’ status, and as such I’d both long known about the place and long wanted to get myself there (for example, I mentioned wishing to get there in the write-up of my Yakutia trip back in 2013). And of course I wanted to be there when it’s at its very coldest – in the middle of winter (the post-New-Year holidays would be ideal). Then we might get to experience -50°C or lower, obviously a must-do for anyone ). 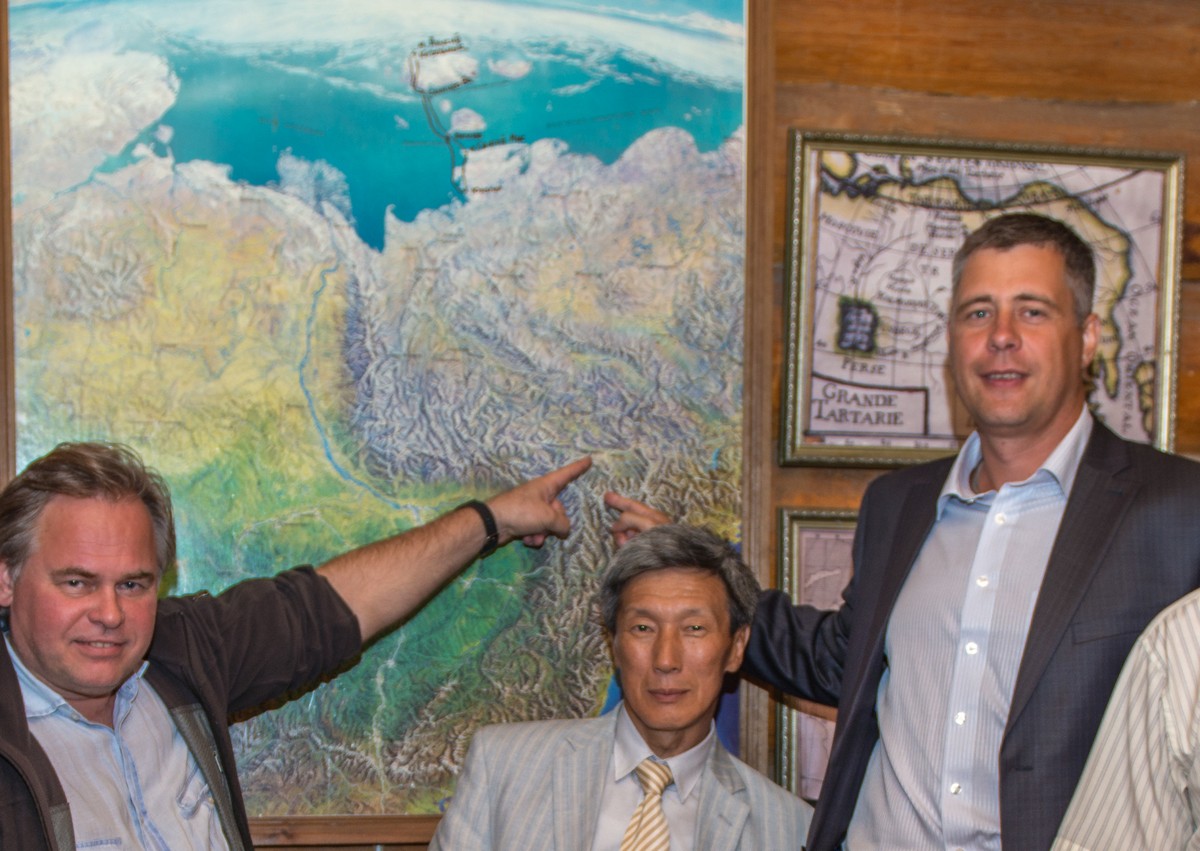 (Yes – this photo is from 2013 (August), and my covetous finger there is pointing at Oymyakon:)

Some of you may be wondering why Oymyakon is the world’s coldest place, when there are plenty of settlements around the world further north, some – much further north.

Well, I won’t go into the meteorological reasons why, but I will tell you that it is (arguably) the Pole of Cold (the world’s coldest spot) for the northern hemisphere. Never heard of the Poles of Cold? You have now. Oh, and the Pole of Cold for the southern hemisphere? A bit less surprising: it’s on Antarctica, at the Russian Vostok Research Station, where the lowest temperature recorded was -89°C. But that’s some 3500 meters above sea level and it’s not permanently inhabited; Oymyakon is a mere 740 metes above sea level, and is an actual functioning settlement with roads, schools, shops… So when Oymyakon can boast around -70°C, well, isn’t that cooler (!) than Vostok (no roads, no shops, no schools, no nothing but a few huts!)? I mean, it’s colder in winter in Oymyakon than even at the North Pole! Up there, the ocean warms the air up somewhat. The South Pole gets brutally cold too (who knew?) , but that doesn’t count – it’s 2800 meters above sea level.

I think that generally it is Yakutia, the far-eastern Russian region where Oymyakon is situated, that is the coldest inhabited (nearly a million folks live there!) place on the planet that isn’t half-way up, or at the top of, a tall mountain. And that’s where we were headed…

So where is Oymyakon? Here: 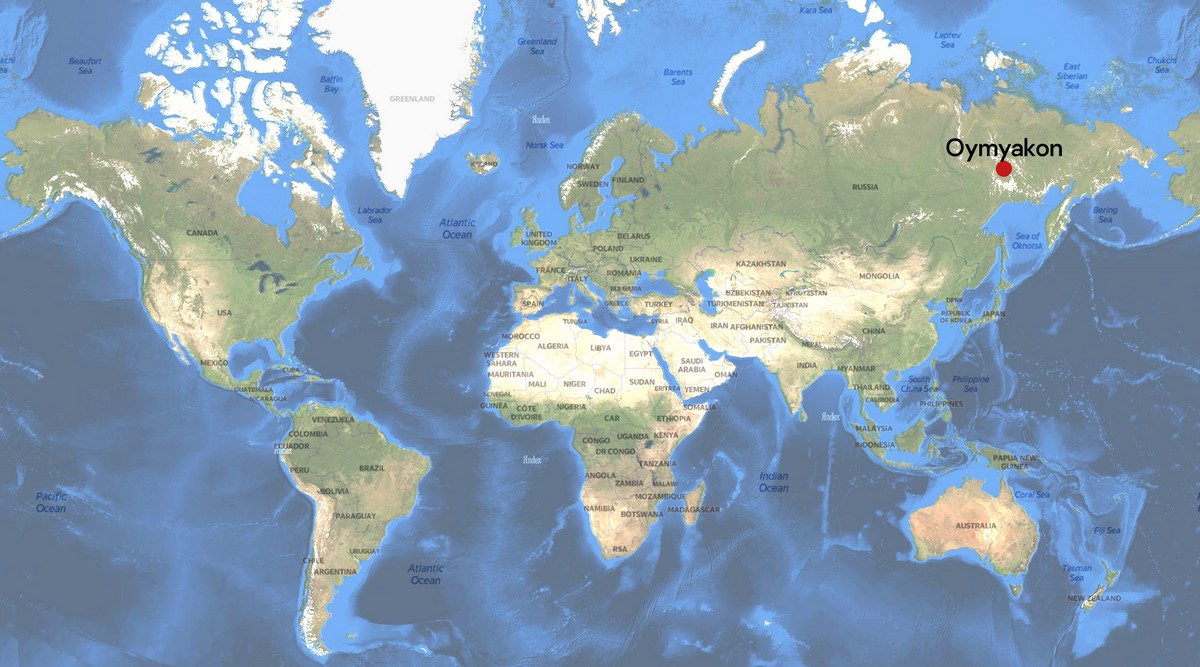 All righty. So we’d settled on the ‘where’. Next came the ‘how’…

It turned out to be not so difficult, only not quite as quick as you might expect. Curious tourists are flown in to Yakutsk, the capital of Yakutia, through travel agencies based in the city. You land, you transfer to mini-vans, and off you pop to Oymyakon – which takes two days (!). You spend a day or two there walking around in the extraordinary cold, then it’s back into the mini-vans for the two-day journey back. Oof. 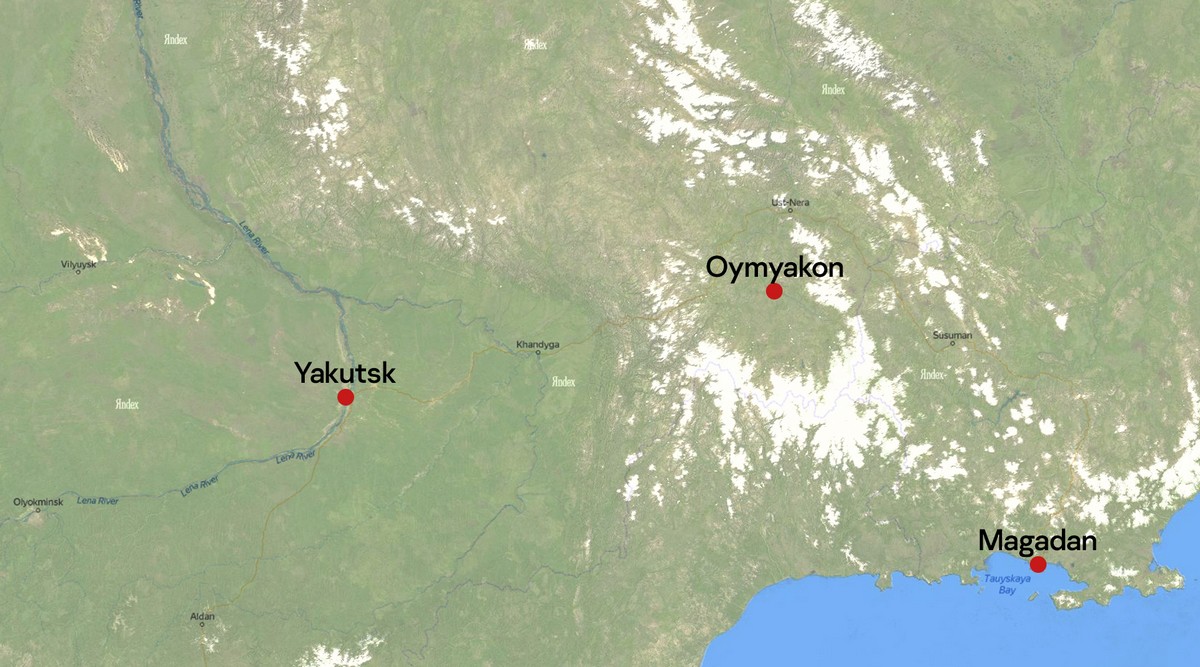 Hmm. Four days on the road. If I could get behind the wheel myself that would certainly take the edges off the tedium. So I asked if it’s possible. ‘Yes’, came back the reply. But some of the more experienced world travelers in our group commented about something else: if we look on the map we see that Oymyakon in almost precisely between Yakutsk and Magadan. Thus, the Yakutsk–Oymyakon–Magadan route was proffered. This route was deemed trickier, but possible if we agreed it with the tourist agency.

But, ever the demanding-picky-finicky group of adventure tourists that we are, we then decided the route back-to-front would be better: Magadan–Oymyakon–Yakutsk. This proved an adjustment too far for the local tour firms. They simply weren’t having it. But our group isn’t used to giving in! So we looked elsewhere for tourist agencies that might have a solution to our whimsicalism…

The organization of the road trip was taken over by our old friend and extreme travel companion, Olga Rumyantseva. She got in touch with the Moscow company Avtorazum and the Russian representative office of Renault. We knew of the former since we drove across a frozen Lake Baikal in their Land Rovers in 2019. Logistics back then were very smooth; this time they were equally slick. What they did was drive our cars to Chita on a truck, then from there they drove the cars over to Magadan. That’s where we met up with them after having flown in earlier from Maldives. Then it was into the rides and off we set: 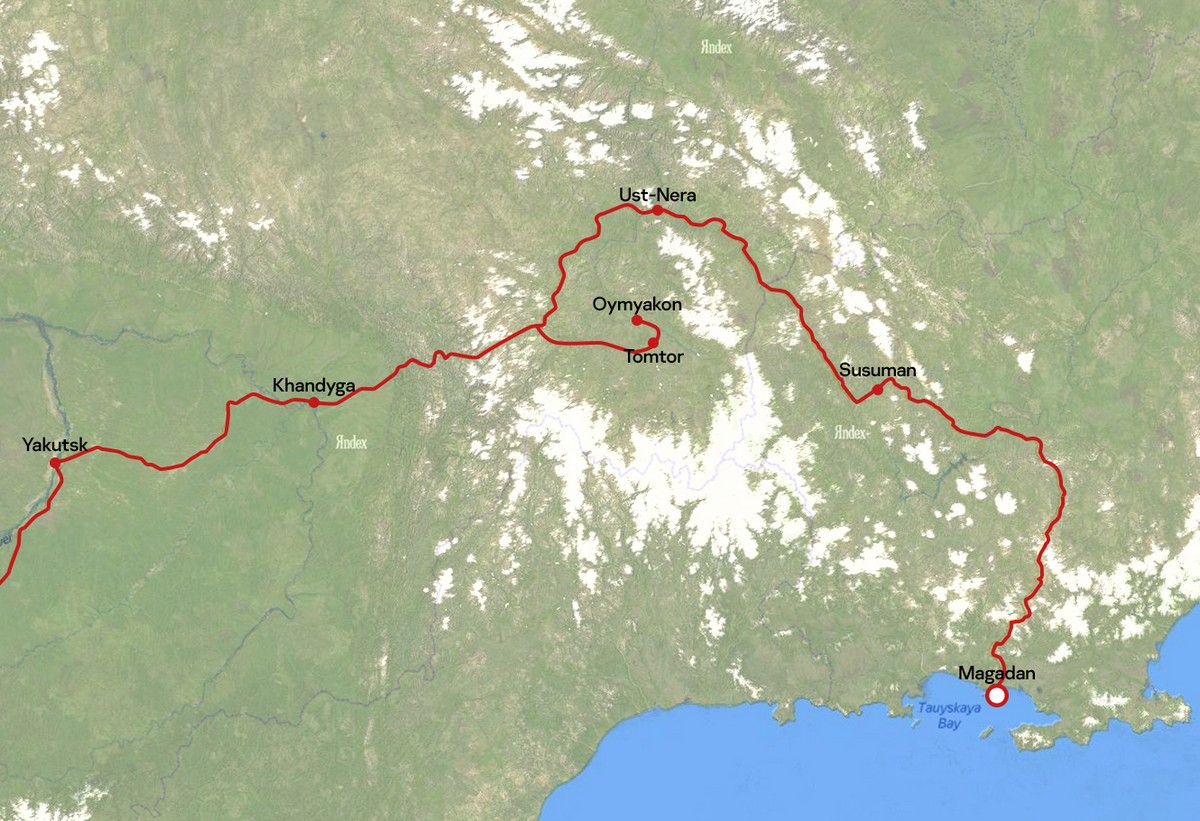 Here’s a small scale map showing the route in the context of ‘this corner of the world’: 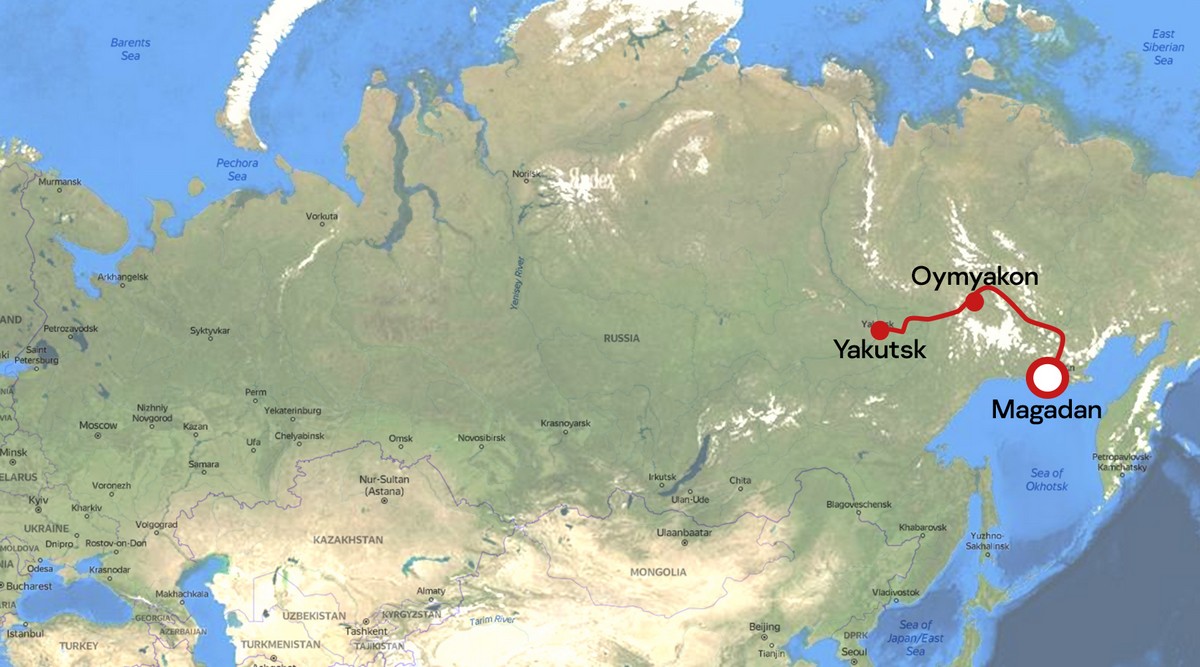 Here’s the smallest scale map I could find. And there’s our route. Looks short? It’s actually 2000+ kilometers long – like New York to Miami! 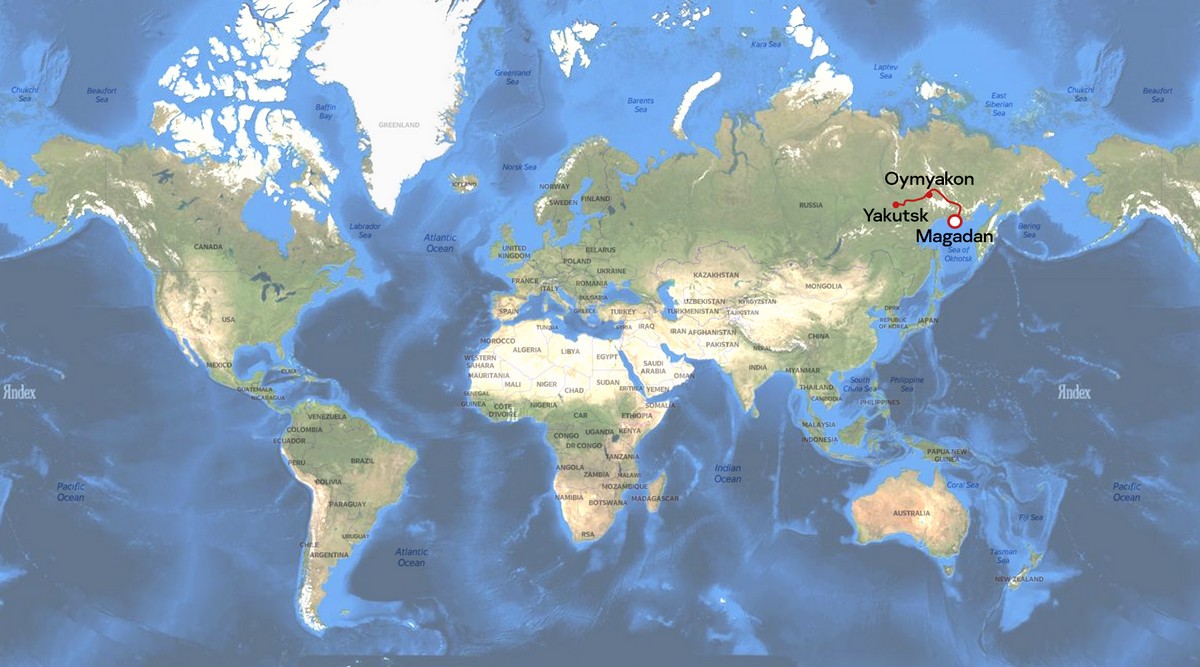 Stilll, it did seem a bit underwhelming a distance to me when I looked at it on the map. So (and this is still back when making the preparations beforehand), in typical moi fashion, I had a think; rather – a rethink: ‘Hold on. Why are we planning on stopping at Yakutsk?’, I thought. ‘Surely further = better, to make it a ‘proper’ auto-expedition, much like those I had in Tasmania, Namibia, New Zealand and Australia?’, I continued to muse. ‘We should drive all the way to Moscow!’, I enthused. And to my astonishment the response from the gallery was mostly one of agreement. Woh!

And that was that. Magadan to Moscow was going to happen!…

And it wasn’t just a veeerrry looooong drive west in the end. After Chita, when we were heading south/southwest from Yakutia, working days had begun, so in the large cities along our route we stopped off for a day at a time for meetings with our customers and business partners. Thus, the second leg of our expedition turned out to be less recreational and more business-trippy. Well why not? When in Siberia, do as the Siberians do – and also go visit them to catch up! We dropped in on: Irkut Corporation‘s plant (and had a look inside an Irkut MC-21 airliner); the management of UMMC (and touched fresh copper (and not just copper); and the KAMAZ factory. And at each meet we agreed on prospects of further cooperation and the continued cybersecurity of manufacturing. Yeh!

We drove practically across the whole of Russia! The roads east stop at Magadan (no roads to Kamchatka!), so we couldn’t have set off more eastward (Vladivostok is well westward, btw). There is a road being built – the Anadyr Highway – from Magadan to Anadyr, but it’s not ready yet. Aha! Yes – that does mean we’ll have to come back when it’s completed for another, longer, cross-Russia drive!

For now though, it was to be Magadan–Oymyakon–Yakutsk…–Moscow! In Magadan, setting off, our sat-navs showed ten thousand kilometers were ahead of us. In the end, given our zigzagging and detours to go see old friends, we covered more than 12,000km! That’s more than New York to Los Angeles – and back! 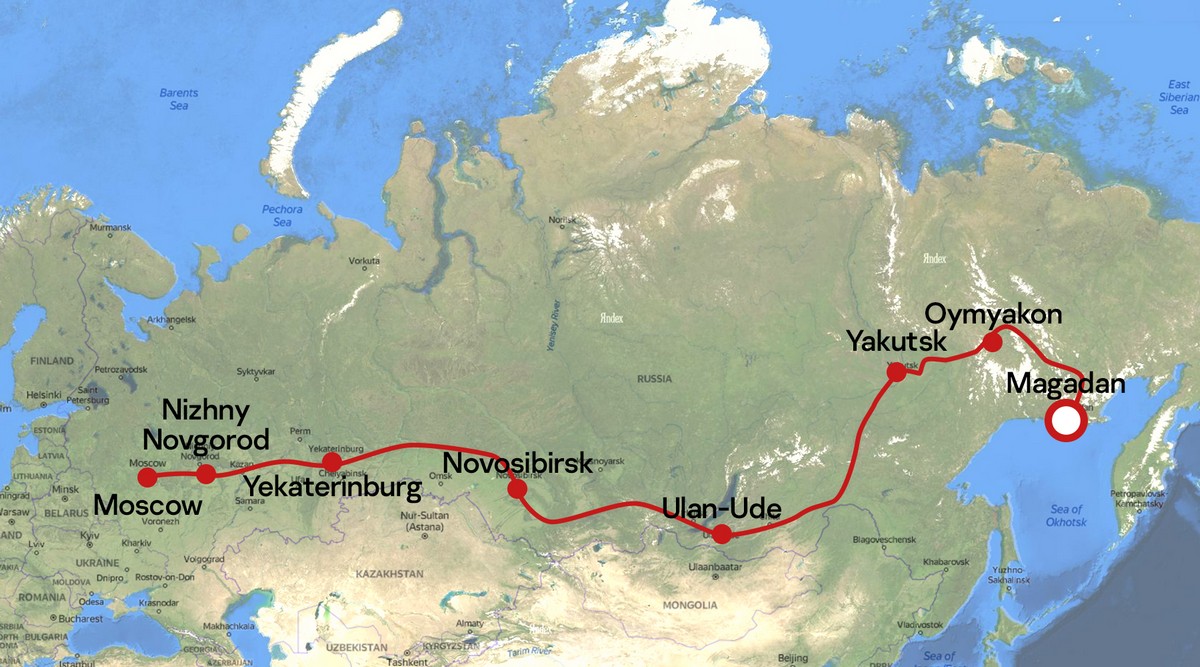 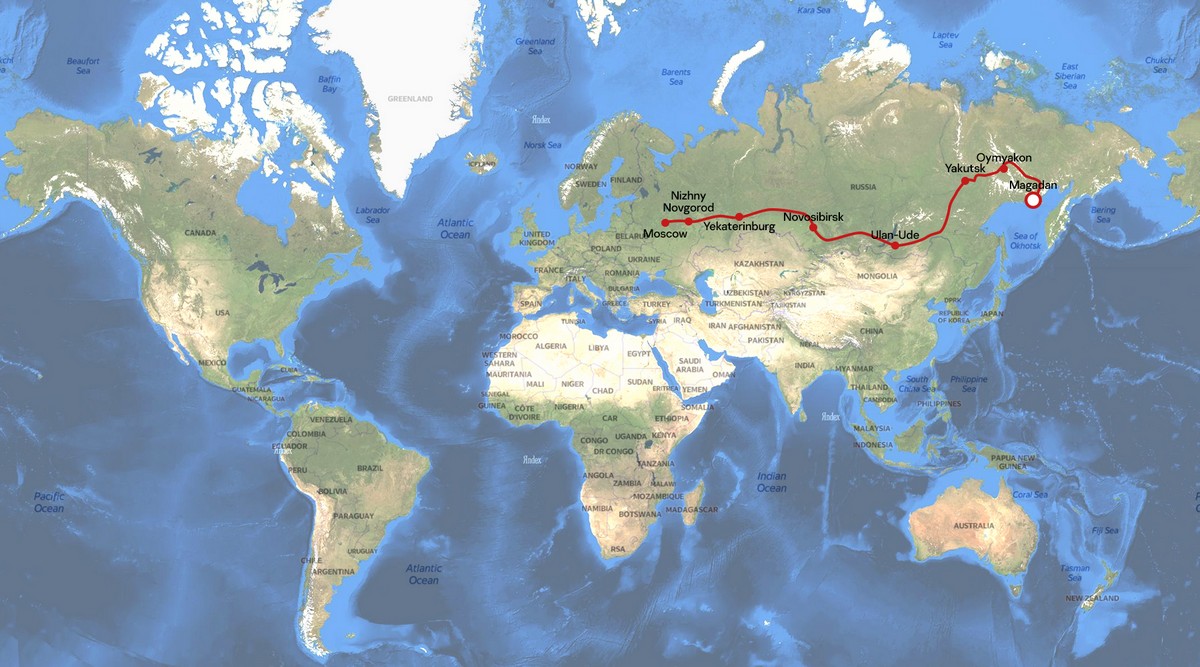 So off we set. First up – Magadan to Susuman:

Got eight hours to kill? Then check out the dash-cam recording of this leg of our journey! ->

Don’t have eight hours to kill? Here are some highlights: 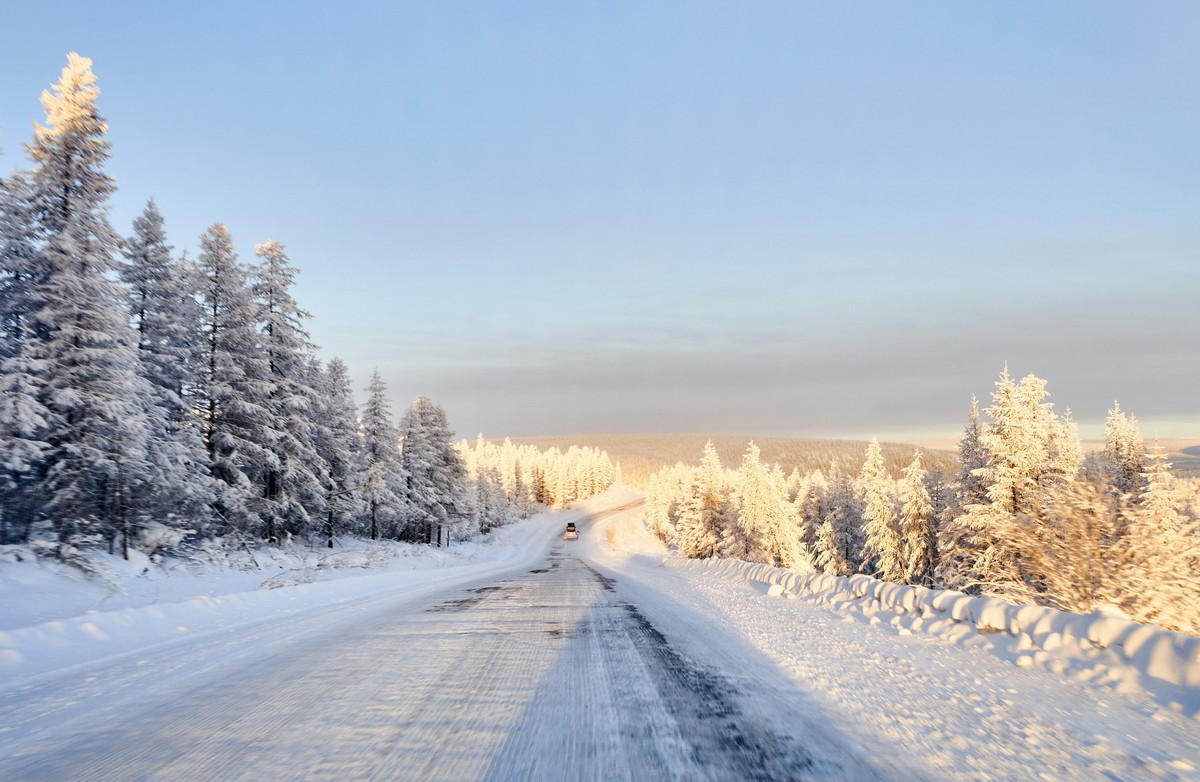 PS: Have you ever wondered what the longest uninterrupted stretch of road is on the planet? I’ve heard it said it’s Magadan to Lisbon, at least between two large cities. A route where you could (but probably wouldn’t want to!) stay in the car all the way (no ferries, but driving over ice poss). Is there anything longer? Anyone hazard a guess? Or – anyone actually know?!

That’s all for today folks; back tomorrow!…