I. Lots of new frescoes were restored, some reaching 2.15 meters tall! (I’ve already written here about how intensely detailed this restoration work is.) The pictures below show frescoes and sketches from Xeste 3 and Xeste 4.

II. Building conservation fieldwork. In other words, excavated structures need to be restored, reinforced (what if there’s another earthquake?), and protected against other factors. The work that needs to be done is staggering. This season, around 900 large fragments of building materials from around the site were documented and transported to a specially constructed facility. 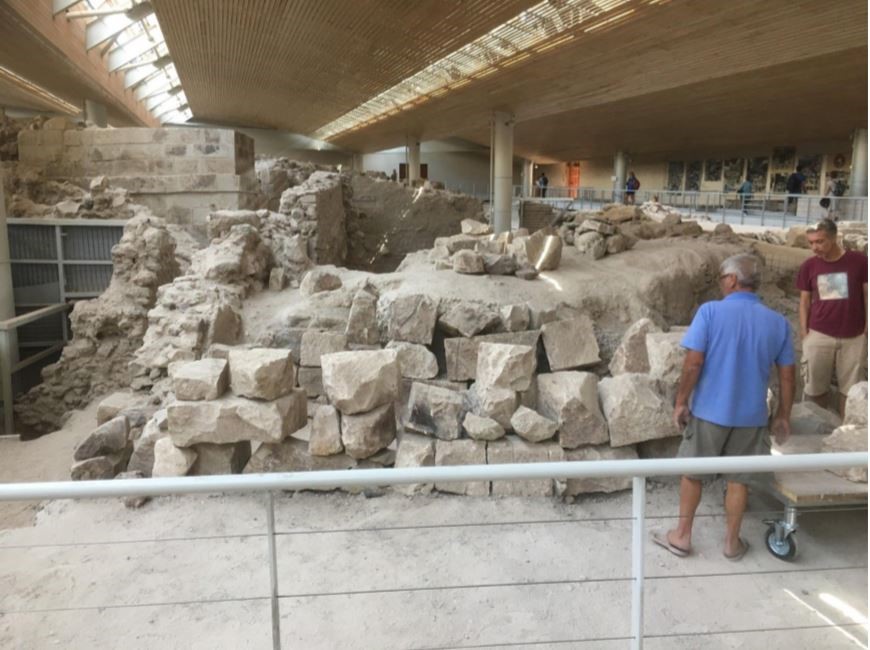 III. Akrotiri is more than just a research site, it’s a popular tourist attraction that hosts tens of thousands of wide-eyed tourists and their shuttering cameras every year. A new guide book was published in the most common tourist languages.

QUESTION: can you guess what the languages are?

To make the site even more interesting and accessible, there are also plans to install new info panels, signs, and other useful screens. The first of them should be ready to go by the start of the upcoming tourist season. Some of the other big projects include 3D movies about Akrotiri buildings and a smartphone app. May the history of Akrotiri live on in the digital world! 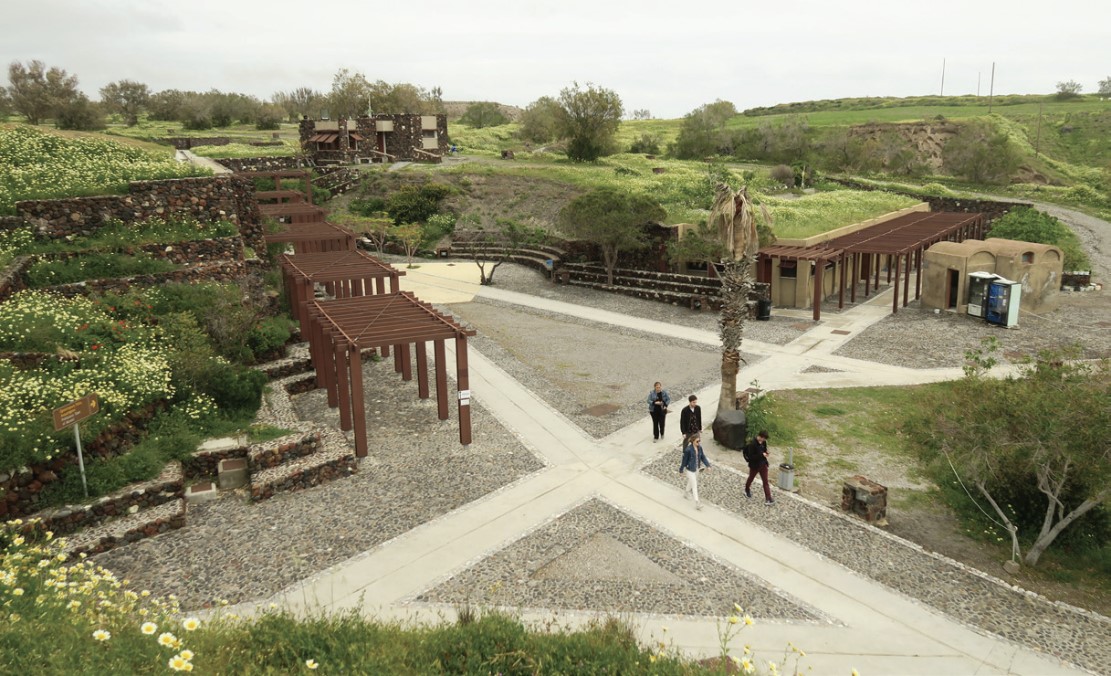 IV. Excavations continue at the ‘House of the Benches’. Talk about a mystery building! At first there weren’t any signs that people lived or worked here — no household items, frescoes, nothing! Or rather, nothing except benches on either side of an 80 cm narrow middle passage. But now things are starting to take shape! Last year, archaeologists unearthed a stash of various artifacts in an adjoining room, including bronze weapons, faience beads, faience imitation wash-basins, and a quartz pendant. They even came across a faience Triton’s trumpet with an inscription in Linear A! But what it says is still a mystery, as no texts in Linear A have ever been deciphered.

V. In another adjoining room they also found an… ancient cafeteria? Or maybe the remains of some long-forgotten ritual? Whatever it is, a total of 147 ceramic cups were discovered. What they were doing there is a mystery. One theory suggests that they probably weren’t for everyday use because they were too fragile. Based on their number and location among other artifacts, it might be supposed that the vessels were intended to be used just once as part of a religious ritual.

Other nearby items help clear up the confusion, such as a big pile of antlers, stone tools, vases and fabric scraps. The current hypothesis is that this area was used as an altar for offerings, sacrifices, etc. Ceramic boxes were also discovered where ancient inhabitants hid a Cycladic statuette (a ‘sister’ to my discovery) and an ornate jar.

VI. Beyond excavations and frescos, there’s also a lot of other useful and essential work being done. For example, the restoration of unearthed ceramic vessels, vases and other pottery. More than 64 separate items were restored last year.

VII. There are big plans for the upcoming years as well, most notably the excavation of another building, Complex Beta, where two unique frescoes have already been discovered: ‘Boxing Boys’ and ‘Antelopes’ (currently on display at the National Archaeological Museum, Athens).

All in all, I’m itching to get back to Santorini to check out everything in person. And what better time than the five-year anniversary of our partnership! I still can’t get over the excitement of discovering that Cycladic statuette. I want more! Maybe I’ll get lucky again? :)

P.S. This is not a paid post. The Ministry of Tourism of Greece had nothing to do with it. But if you happen to be looking for an unforgettable summer vacation, you can’t go wrong with the beauty of Crete and Santorini. Or the Mediterranean’s fascinating ancient history!