Once upon a time, there was an ancient civilization that lived on and around the Mediterranean island that is today called Santorini, part of Greece. But then that civilization just disappeared, and no one really knows for sure just where to. And that was before a catastrophic volcanic eruption wiped out all that remained of the civilization. I’ve already written on these here blog pages about this fascinating place (a few times a couple years back, and a bit earlier). Ancient legends, astonishing archeological discoveries, and unbelievable hypotheses and assumptions – that’s what this place is about.

More than 3600 years ago the Minoans lived here in a city made up of houses of three or four stories, with fully working plumbing systems. But ‘Minoans’ is the name given to them thousands of years after their disappearance; who they really were, what they called themselves and their island, what language they spoke and wrote, and so on – all that is still a mystery.

All that’s left of the ‘Minoan’ civilization is the ruins of their ancient city: houses and streets, most of which are still all under a thick layers of volcanic ash. 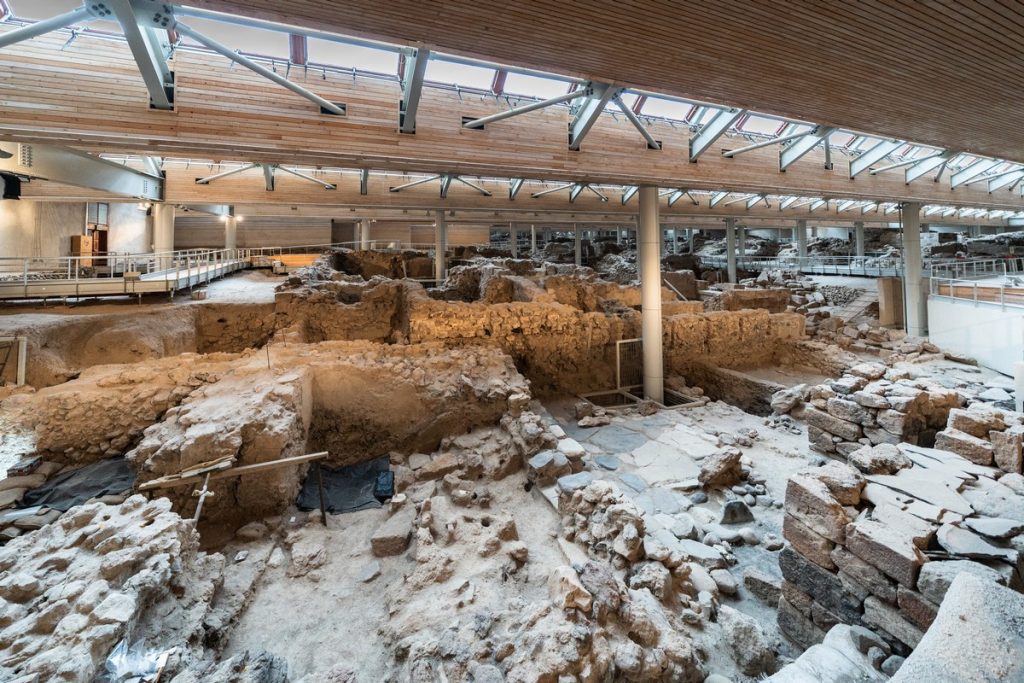 Well I think the above-mentioned is more than enough reason to carry out archeological digs here. And not just dig, but also restore and preserve all that’s already been excavated. And after nearly a year-and-a-half (not including the winter break) of work, something reeeaaal interesting’s turned up! Namely: earthenware boxes containing… hmmm – probably something very interesting… Here are these boxes: 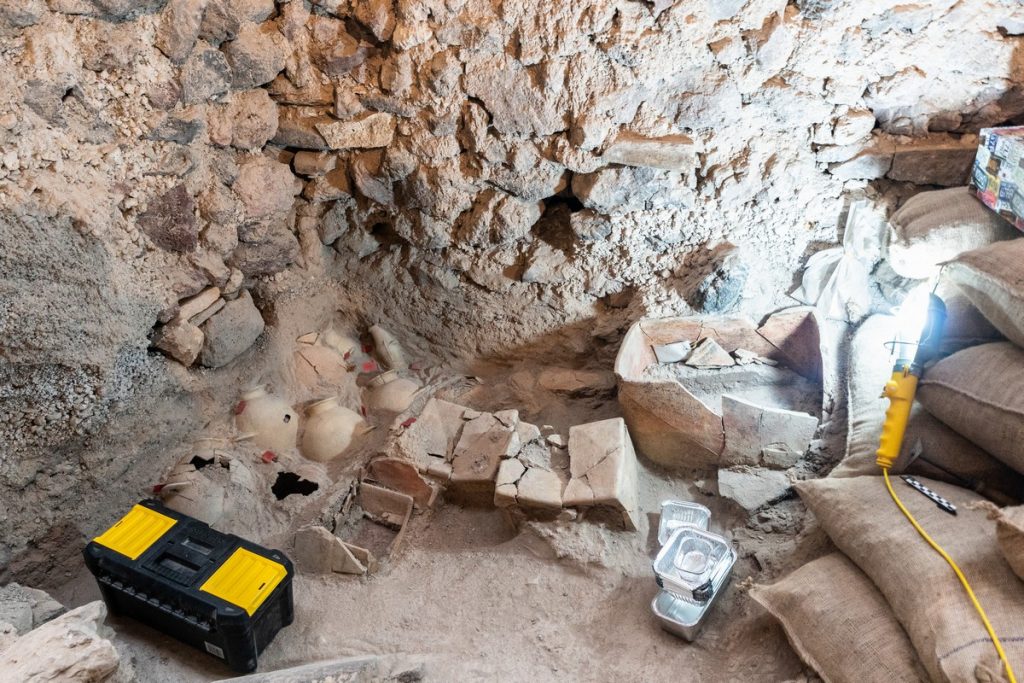 So, what was inside them?

Turns out… – another earthenware box! But inside that… – no, I’ll save that for a bit later in this post…

But first, some background…

Archeological digs – they’re long-winded, punishing, weary undertakings – and with no predictable result. The excavations at Akrotiri have been going on already for more than 50 years, and in that time hardly any really significant finds have been made – besides a gold figurine (now in the local museum), many a fresco, and lots of other bits and pieces. Why? It looks like the city was evacuated; all valuables were hauled off somewhere. The only things that remain (mostly) are walls (and now – boxes!). 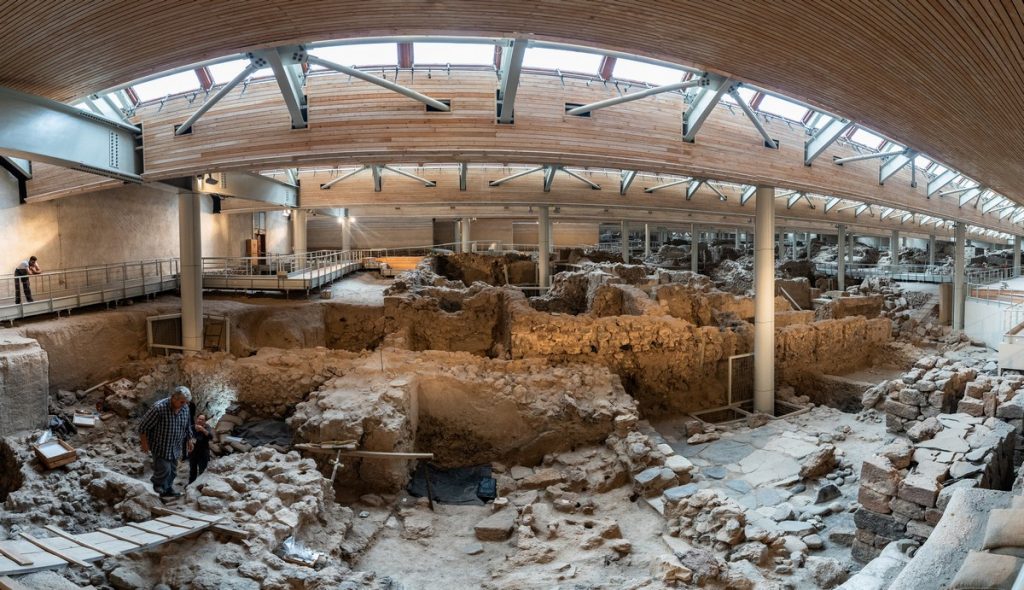 The frescoes here really deserve a whole blogpost dedicated just to them as they’re so fascinating. But I’ll leave them out here and just suggest you do your own research thereon (if that kind of thing floats your boat). Or you can check out some of my older posts that mention them.

Frescoes are sometimes found in large pieces, but normally they need piecing together out of tiny fragments like a jigsaw puzzle; like this:

It’s already known where all the frescoes mostly reside – in the largest and most luxurious buildings. But where else should be excavated promising interesting finds? Turns out the local archeologists, to whom I take off my proverbial hat, worked out that there’d be interesting stuff in a far corner of the excavation site – in some kind of sanctuary/shrine. And so that’s where they dug – and that’s where they eventually found – enveloped in volcanic slag and dust, earthenware jugs and boxes. In the jugs was probably kept cooking oil or some other organic liquid, which most certainly has turned to dust over thousands of years. But in the boxes there may just be something curiously interesting fascinating…

Look at these two boxes – still with their lids on. Lids no one’s had a look under in thousands of years! Time and volcanic soil has clearly broken up the boxes’ lids and sides, but could there be something whole and untouched inside?… 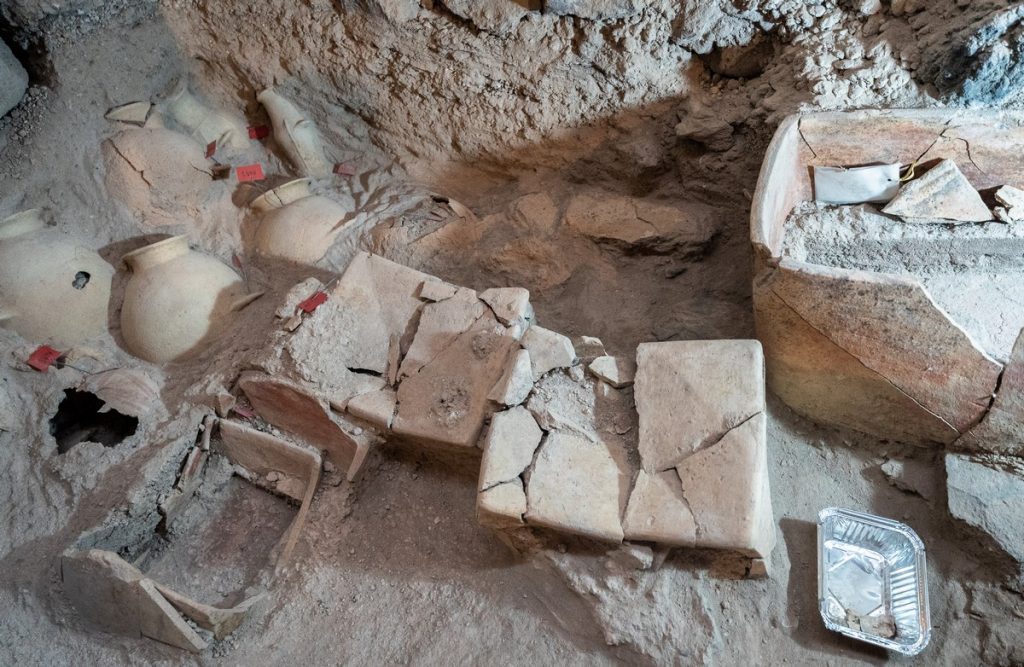 I observed the ongoing work for a short time, and I can say for sure it is very painstaking. They use tiny brushes (not sure if they’re ‘special’ archeological ones, or just regular painting brushes; any archeologists out there? You know?), and also little air blasters which blow away the dust: 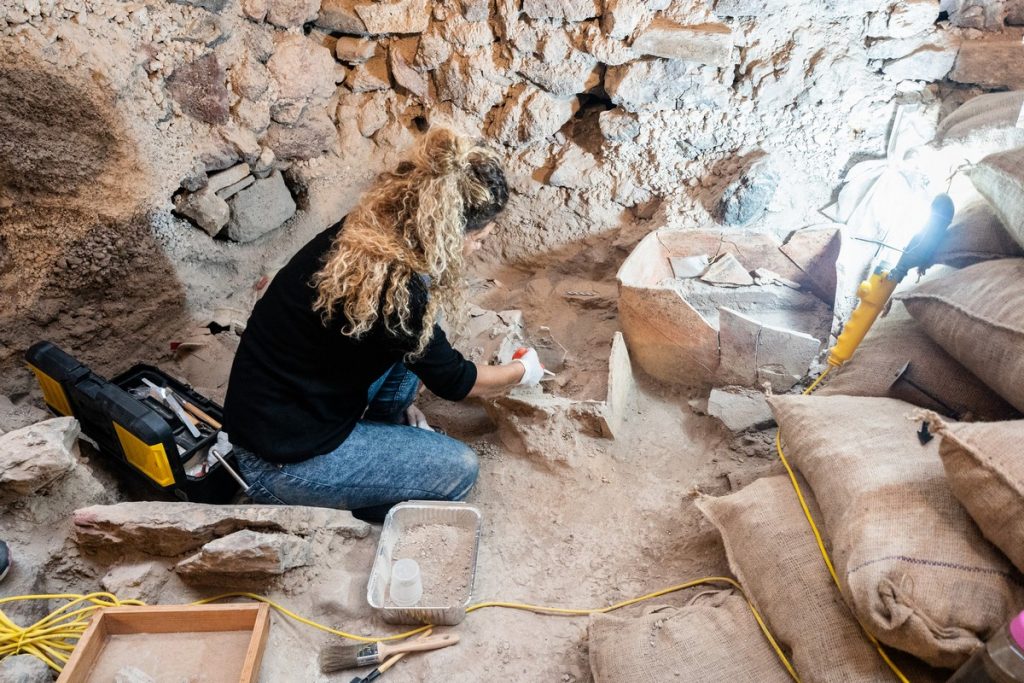 The lid of the box was taken off bit by tiny bit and put into a tray. The tray was sent off to the lab for examination and checking. A decision will be made as to whether to glue it all together to give us what it once looked like, or to leave it as it is now. Archeologists don’t rush to restore everything; many prefer to leave things as they are. 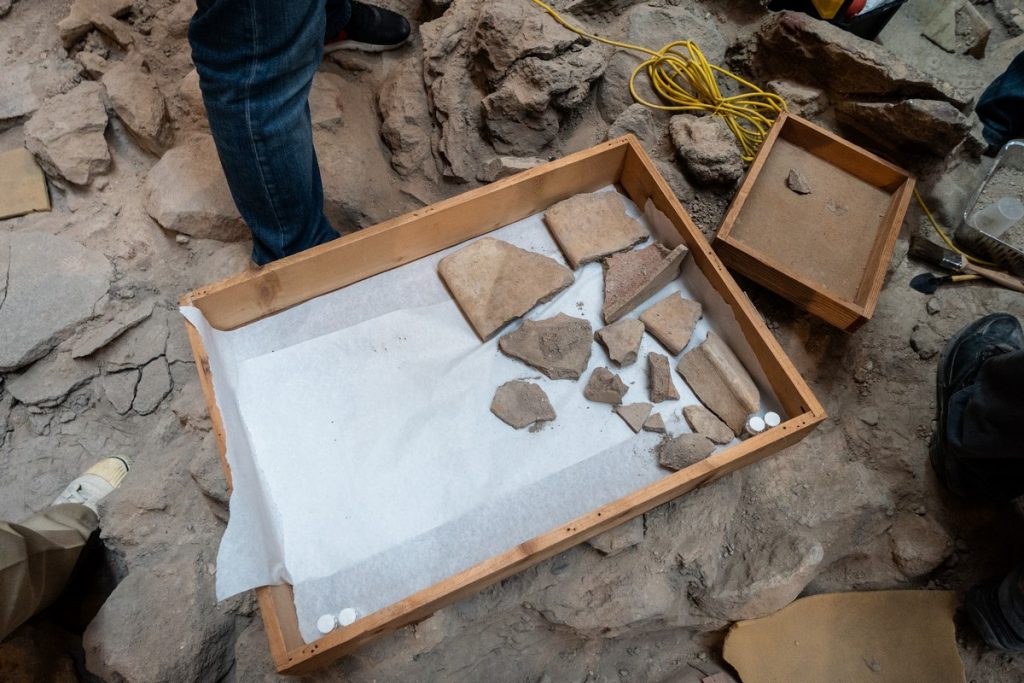 From time to time something of particular interest is found and all the workers rush to take a look, pics and notes.

Having taken the lid off the box, it was time to finally peep inside. And what did we find? Another box! A veritable Russian doll! Quite why – no one can be sure.

Hours later, suddenly, in the box was slowly uncovered… 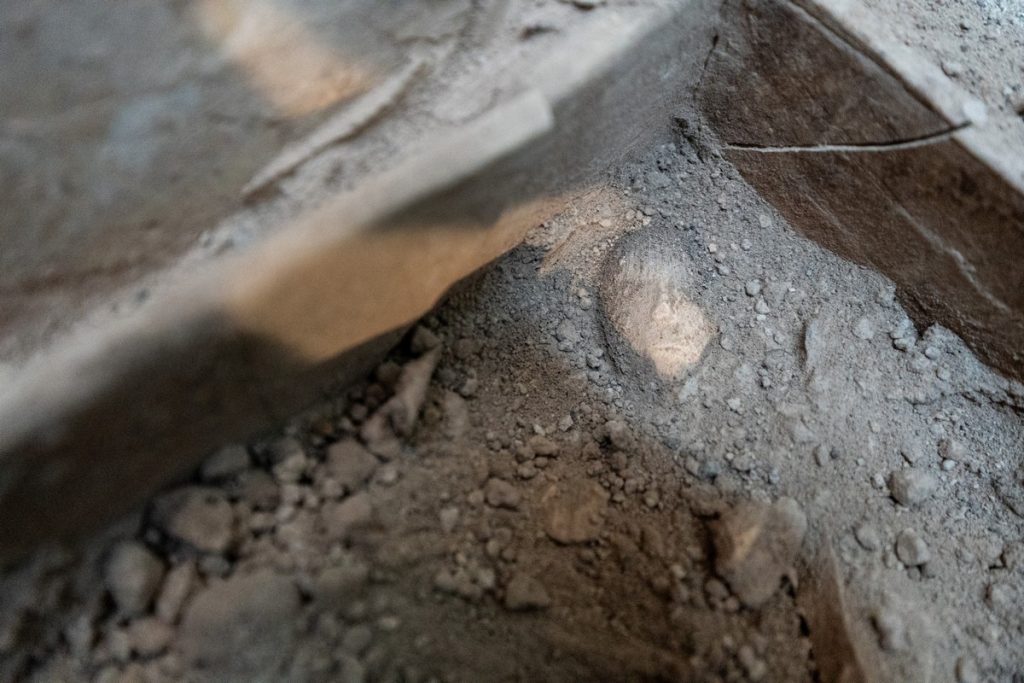 Oh my… a little face was peering at us out of the volcanic dust!

Now, that little face may not seem such a big deal to you as you read this. But when you’re there, observing the slow, diligent work for hours (imagine when they find nothing for months or years?!), and then finally they find something OMG, let me tell you that the feeling is simply awesome and unforgettable. Remember, that there figurine’s face has been buried for thousands of years – and we’d just ‘woken her up’ from her long slumber in the dark!

Yes, we were soooooo lucky to have witnessed such a significant find after just a few hours of our stay ).

Adrenaline/serotonin/whatever-rush over, it was back to digging further, millimeter by millimeter. But of course it was: there may be more than just a pretty face down there…

After each layer is removed – more inspections and pics: 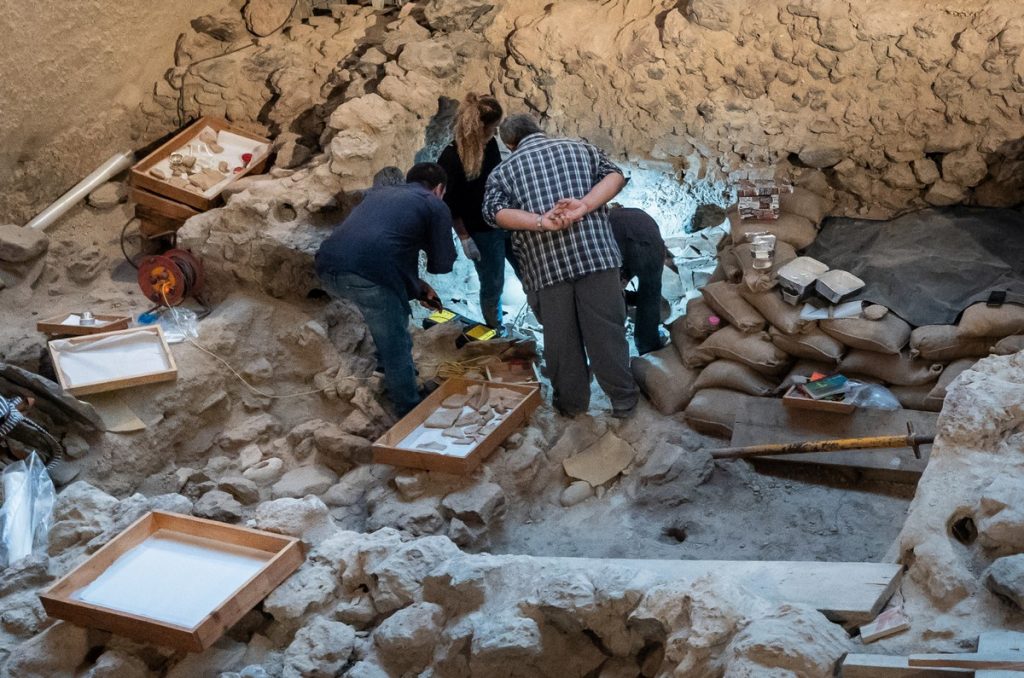 And just three hours later and we were in luck yet again! Check this out:

The first ideas were thus: this is a female figurine – perhaps a goddess – made of marble; age: approximately 4700–5000 (five THOUSAND!!) years old! She was lying in the box when the volcanic eruption engulfed her.

Two weeks have passed already since this extraordinary find, during which time the Greek archeologists have been carefully studying the figure itself, plus reference works on different epochs for figurines such as her: 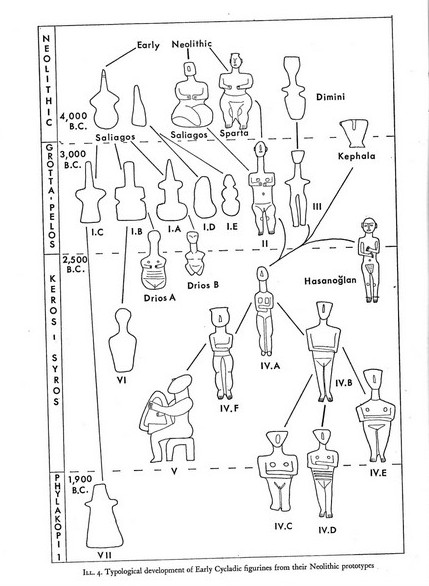 Here’s another statuette found a year earlier, also inside a box:

Here’s the one just found: 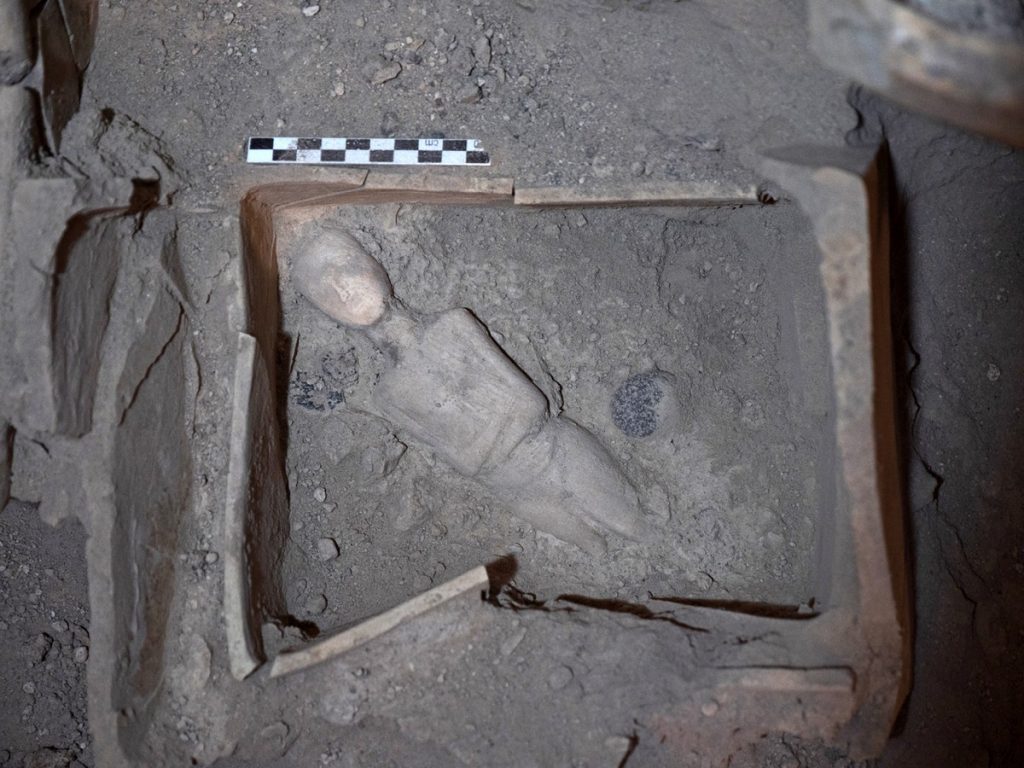 And the text of the archeologists’ conclusion on the find goes something like this:

(Mostly) female figurines of the early Cycladic period relate to the third to fourth centuries of the third millennium BC.

The first human-like marble figures – the most naturalistic – relate to the early ‘I’ Cycladic period (EC I) (around 3000–2700BC). The given title of figures of this period is the Plastiras type, named after the cemetery on Paros where they were first found. The arms are crossed across the stomach, the fingers touching. Another figure of this type is the one found during the dig of the ‘house with benches’ in Akrotiri last year.

Different versions of figures with crossed arms are typical of the early ‘II’ Cycladic period (EC II) (around 2700–2500 BC), and relate to the ‘canonical’ type because of their particular features – oval or triangular head tilted back, arms bent at the elbows and resting on the belly – the left one above the right, legs together but marked with a deep furrow between them and slightly bent at knees, toes pointing out.

Recently a figure was found, again, inside a box, and relates to the hybrid (crossover) type, combining characteristics of the Plastiras type (physiognomic characteristics: eyes, mouth, ears) and the canonical type – of EC II. But one peculiarity needs pointing out: the left arm is placed under the right. All these characteristics together permit one to classify the find as a figure of the crossover period. In the scientific literature it’s referred to as the pre-canonical type.

All rather fascinating. Need more of this kinda stuff.

So what was found inside the other box the next day? Go on – have a guess!…

Onward they dug, into that inner box, millimeter by millimeter…

Until they came to…

Yet another box. Even more Russian doll-like ).

This one was probably made of wood, so after ~5000 years there was nothing at all left of it – only a ‘shadow’: outside the volcanic slag was denser; inside – less dense and more crumbly. Oh my! Also, in the crumbly slag they found a small bone, but that’s it – nothing else. Probably, beside the bone (or attached to it) there was organic material, long since rotted/turned to dust. But we’ll probably never know for sure…

The figurine I saw being uncovered will no doubt soon be on her way to join her sisters in the local prehistoric museum. I think she’ll stand out among her siblings there too: she appears to be better preserved. 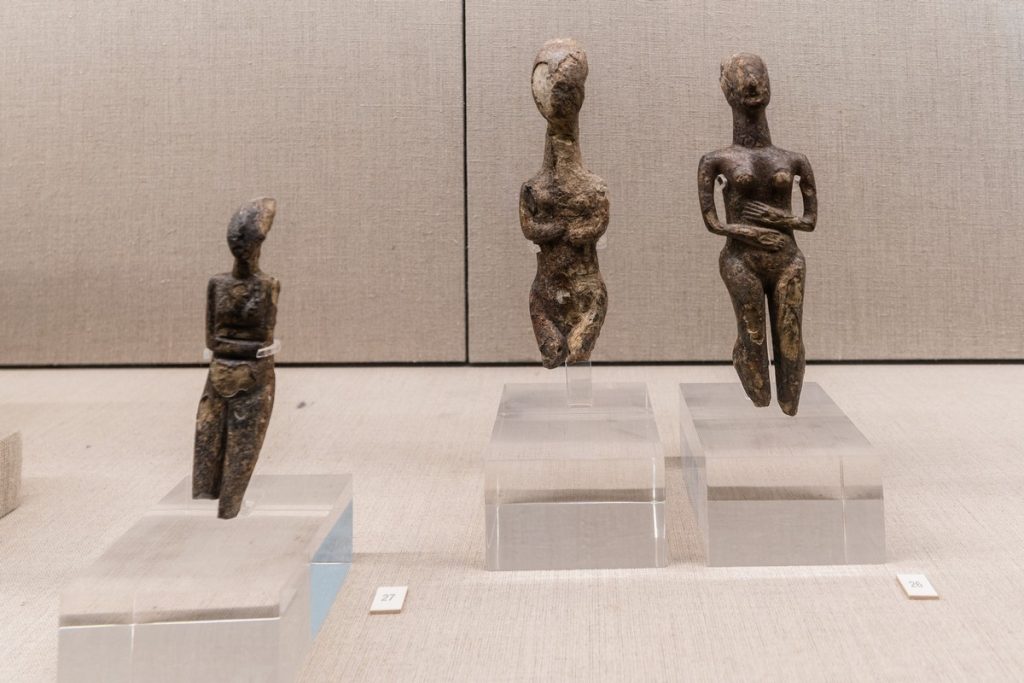 I’ve said this before, but here I go again: Santorini is 100% mandatorily must-see, if for just one time. And while there, a must-visit: the museum. Small, but totally incredible. Especially the frescoes:

This gold goat, btw: one of the first finds of the reinstated digs at Akrotiri:

And for those interested in the history of the Akrotiri excavations, here’s your intro/primer: 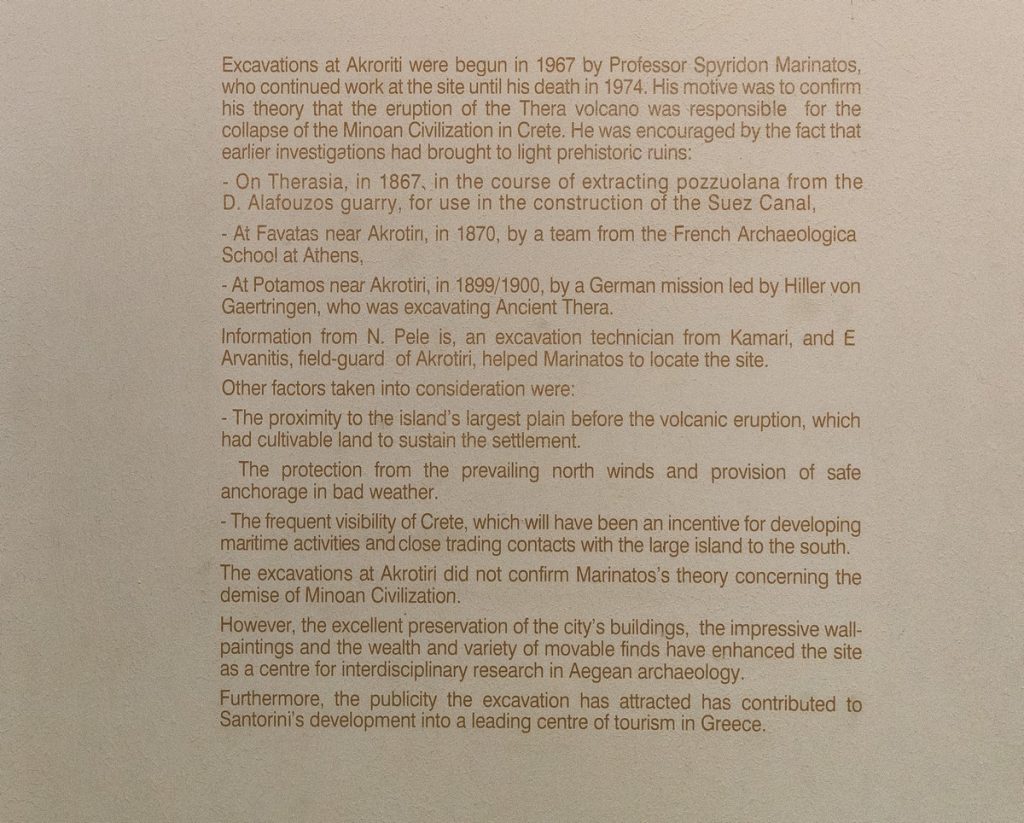 The figure we found – she’s probably still in her box. They’re still deciding what to do with her – leave her there or take her out. Not that we’ve anything to do with that; we’ll leave it to the competent professionals.

Well, that’s all for today folks, and that’s all I have for you from the Greek islands. Back soon!