I’ve got some great news! The archaeological digs in Akrotiri have been resumed – thanks to, ah, um… us! (Not that I want to blow the KL trumpet or anything but, well, what am I going to write? The money grew on trees?) And not just the digs, also the reconstruction of the frescoes and reinforcing of the settlement’s walls! Yes, we’ve become the main sponsor of the excavations at Akrotiri! Hurray! That’s why I was on Santorini last week.

So how did the KL-Akrotiri connection come about? Why Greece? Why Santorini? Why Akrotiri? I’ll be telling you all about that in this post. It’s quite a long tale – but not as long as the time it’s been in the making: 13 years!

It all started in 2003, when I was vacationing on Crete. No. Scratch that. 3000km in a rented car isn’t vacationing. Vacationing is where you relax. It was more an expedition to see as much of the island as poss. Zero relaxation. Anyway, at one point someone was telling me all about the neighboring small isle of Santorini. This was back before the days of full-on Google and the likes, so I wasn’t able to call up instant encyclopedic data on the place or 360°-views. So I just logged the name the island in my memory but mostly let its existence pass me by: no follow-up, no realizing I just had to get over there asap.

A couple of years later, in 2005, I was back on Crete, and decided to get on the dawn-ferry up to Santorini to spend five hours on the island. It was then when I found out how special Santorini is, and then when I decided I just had to get back there soon.

The following year I was back, spending three days traversing the whole island. We checked out its famous red beach and then wanted to check out Akrotiri. But sadly it was closed to the public. Downer! But that didn’t stop me: by 2006 Google was fully up and running, so I searched for Akrotiri… and was bowled over.

Now, I’m no specialist, no scholar of ancient history, archaeology and excavations, but I was just curious. I am an… advanced tourist, who just wants to dig and dig… to uncover the real deal. Especially if that real deal is interesting – more so if it’s mysterious… especially so if it’s anciently mysterious!

Like I say, I’m curious, and a pro-tourist. So when I read about the Akrotiri digs my mind was blown. The stuff they’d found and the historical notes that went with it all. I was drawn to it like a paper clip to a magnet…

But what I was most curious about was what hadn’t been dug up yet – the rest of the preserved settlements of this ancient civilization still under hardened volcanic ash. And why wasn’t it being dug up further? As I’ve already mentioned, the reason was a simple lack of money. So it was there and then when I set myself a dream – to one day provide funds for the digs to continue.

Fast forward some 7 years to 2013 and I was back, and finally my dream started coming true: my business colleagues agreed to my idea of sponsoring the digs and we were ready to kick things off. But it turned out sponsoring archaeological digs in Greece are no cakewalk…

First we had to find the right contacts. Then we had long discussions with the Greek archaeological community, which lasted some 18 months. It took them quite a while to understand we simply wanted to be sponsors – to help out – and not to want to lay any claim to any of the stuff they found, let alone ship it out of the country. Let it all stay in Santorini, we told them. And we won’t get in your way at all; in fact we’ll just leave you to it! In total all that convincing took two and a half years! Two and a half years to be allowed to gift a lot of money!

Anyway, we eventually persuaded the Greeks to take our Euros, and now all the formalities have been formalized and everyone’s happy! Last week we officially announced our sponsorship of the Akrotiri digs.

I’m so excited about the project. Under that volcanic ash are a lot of unknowns. Finding out fully how things were then and how folks lived – that was my dream. And there was a bonus: we were the first private company in the world to sponsor the Santorini archaeological digs. And I hope not the last. 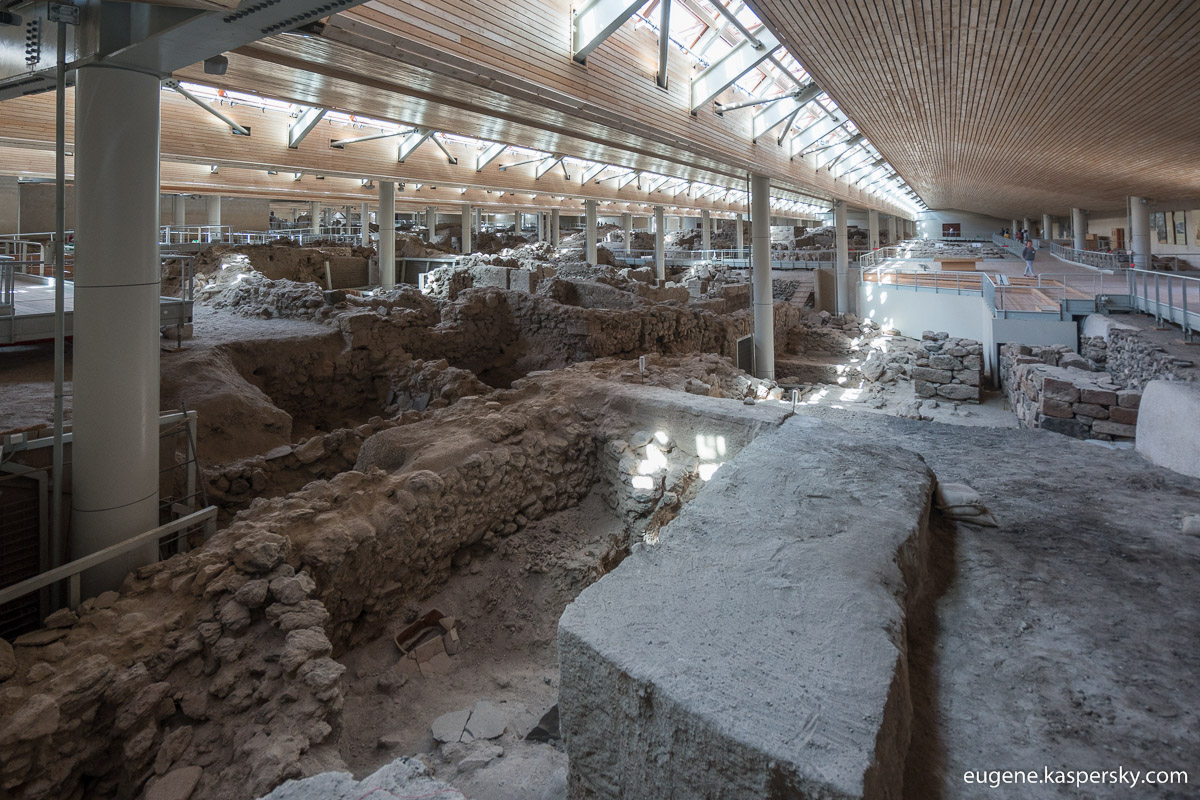 … The most important aspect is preserving what gets dug up. Another surprise: it turns out Enemy No.1 of ancientness isn’t man, as you might think him to be. It happens to be… bumble bees! For they’re fond of chewing out holes in the excavated buildings to make bee-homes of!

I’ve mentioned how the ancient inhabitants of Akrotiri were waaaay ahead of their time generally… Well, here’s just one way in particular: they built the whole settlement anti-seismically! They knew all about earthquakes, so built their three-story buildings accordingly. Walls were strengthened with wooden beams, and also constructed in layers: a layer of clay, a layer of tuff, and then a layer of rocks, repeated over and over, up and up, to build the walls. Shame they’d never heard of reinforced concrete. Still, didn’t stop them constructing a whole settlement!

Only one area of the settlement has been found and partly studied to date. But there’s still a great deal of work to do on this one area. Anyone want to volunteer to help?

I had a stroll along these ancient streets. The feeling was… esoteric. Greek archaeologists say they’re the second oldest excavated roads in Europe, maybe in the world.

Progress with the digs is slow, as they need to be done very carefully. There’s still plenty to be uncovered, but the main thing is not to wreck what’s already been revealed, and not to harm what’s still in the ground.

Among the most interesting ‘fossils’ are of course the frescoes uncovered.

How do we keep record of memories these days? By taking photos and videos.

Back then they painted frescoes: selfies of the age. These are extracted in little pieces out of the layers of stone and volcanism (slag and ash).

This is what they look like after having been dug up:

And this is how they put them together:

And this is how the pieces of the puzzle get glued together:

They’ve sure got their work cut out for them. It’s a bit like how we reverse-engineer really sophisticated malware: painstaking work putting all the pieces together. Some frescoes have been worked on for 20 years (!) to reinstate them to almost their former glory from tiny pieces.

The result is more or less legible pictures. Some pieces are missing but the overall scenes can be made out, allowing you to fantasize about what the whole thing looked like. 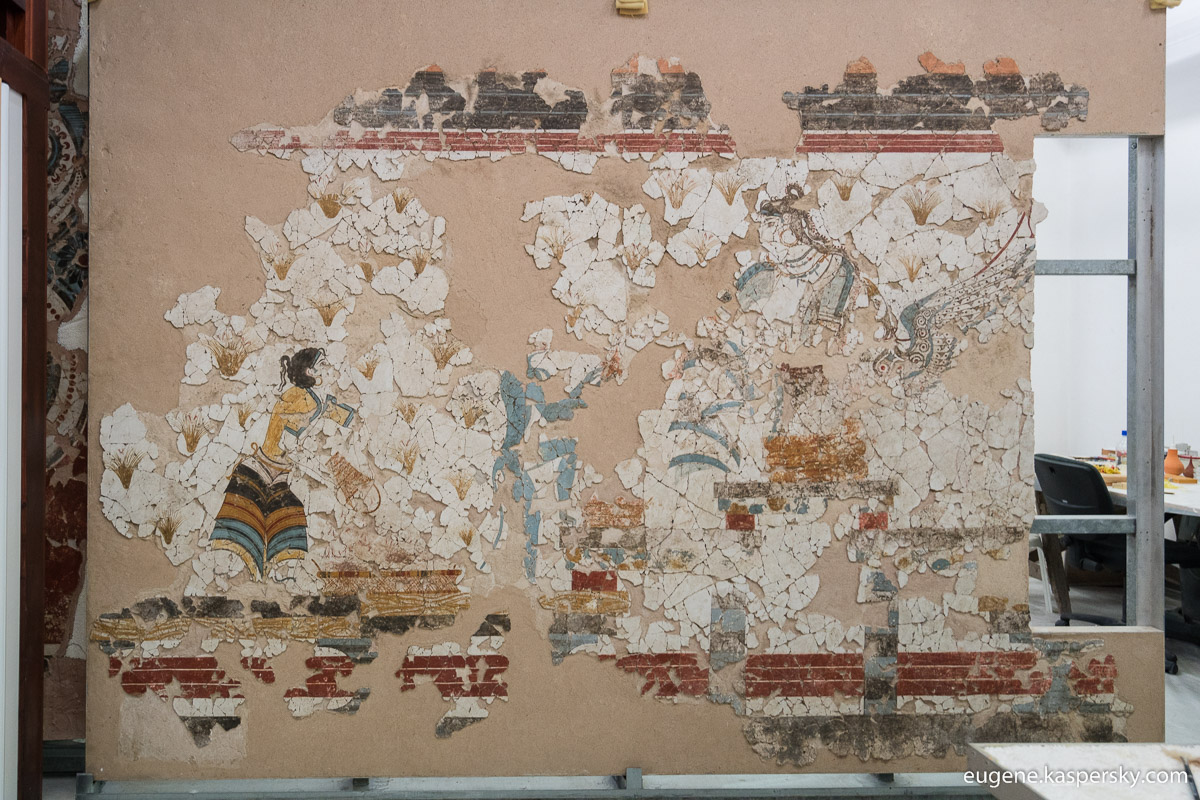 A work in progress:

While these are almost complete: 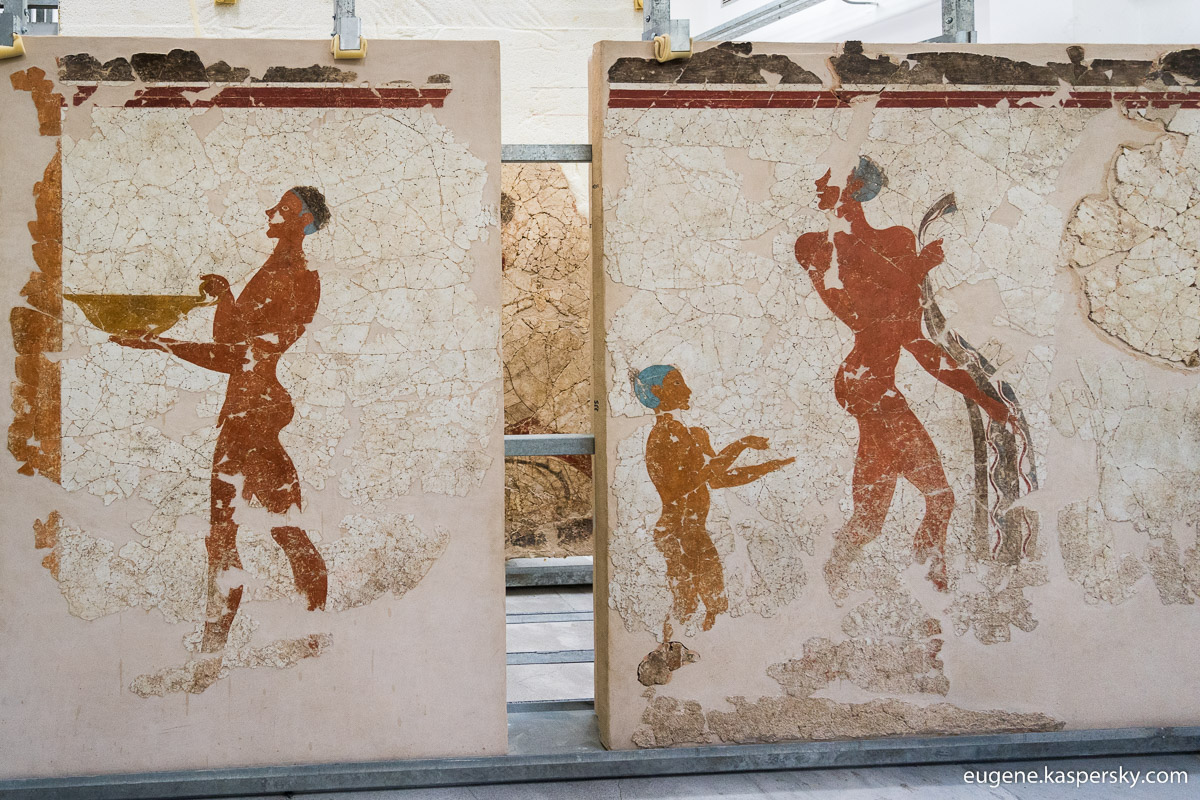 World exclusive premiere! We were the first visitors to see these frescoes restored. The honor was all ours. 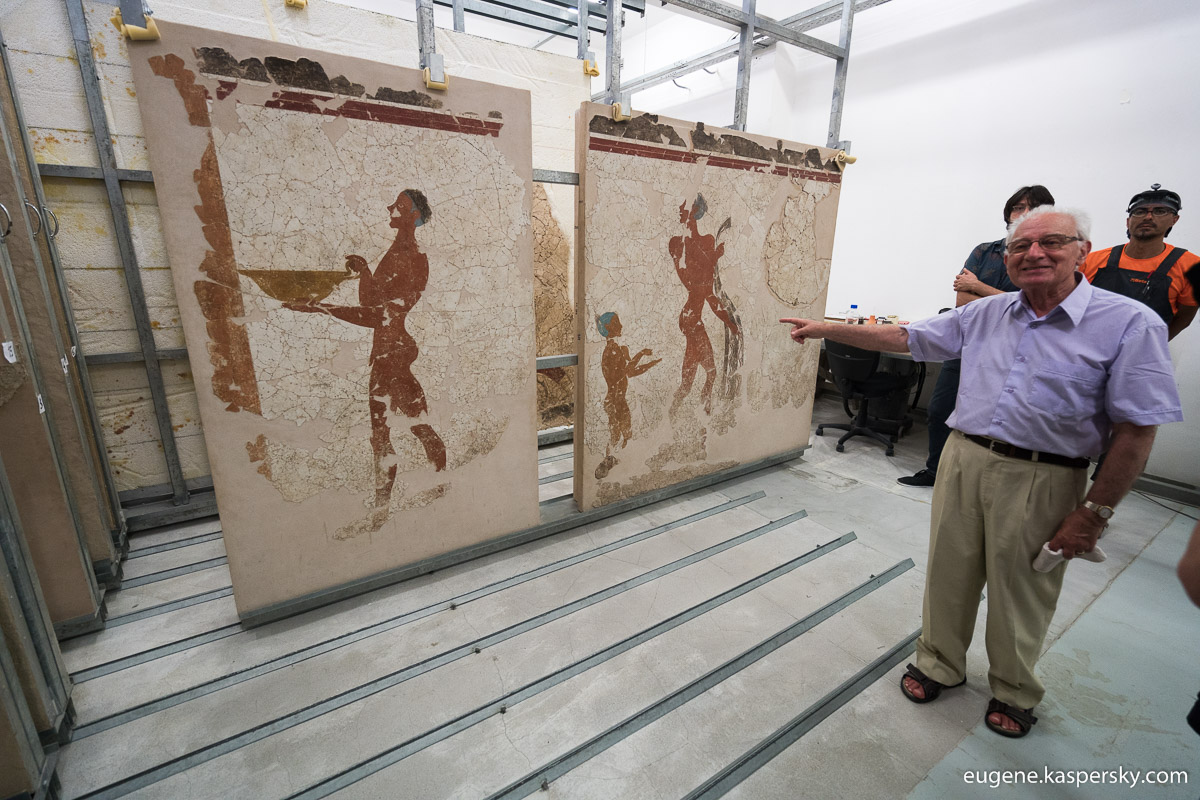 Some of them are better than others. Some are pretty hard to make out. But there’s a special artist who tries to paint in the missing bits:

What can I say? My dream came true. And so we dig. But not only dig. Also important is preserving what’s already been dug up and re-assembled (especially the frescoes), strengthening the walls (so they don’t fall in on recovered items due to the digs themselves or earthquakes, and digging ever more!

All the photos from Santorini are here.