The island of Santorini is famous not only for its sensational panoramic views, its stunning sunsets and its multicolored beaches (white, red and black). It’s also – to some primarily – famous for its ancient history. To the south of the island parts of an ancient settlement were dug up that were well preserved under volcanic ash. Three-story homes, drains and sewers (!), and a unique cultural aspect. Oh my Greek gods!

The settlement went the way of Pompeii around 1500 years… not ago, but BC!! Meaning all these walls, streets, windows, pots and pans are more than 3500 years old!

The archaeological excavations here have been going on for nearly 50 years already. Here’s what they’ve dug up so far:

The excavated kitchenware, the remains of furniture, the frescoes, Linear A writing (still undeciphered after almost five millennia!) and other artifacts of the Minoan civilization – it all suggests this was once a centralized (or federative) trading state. 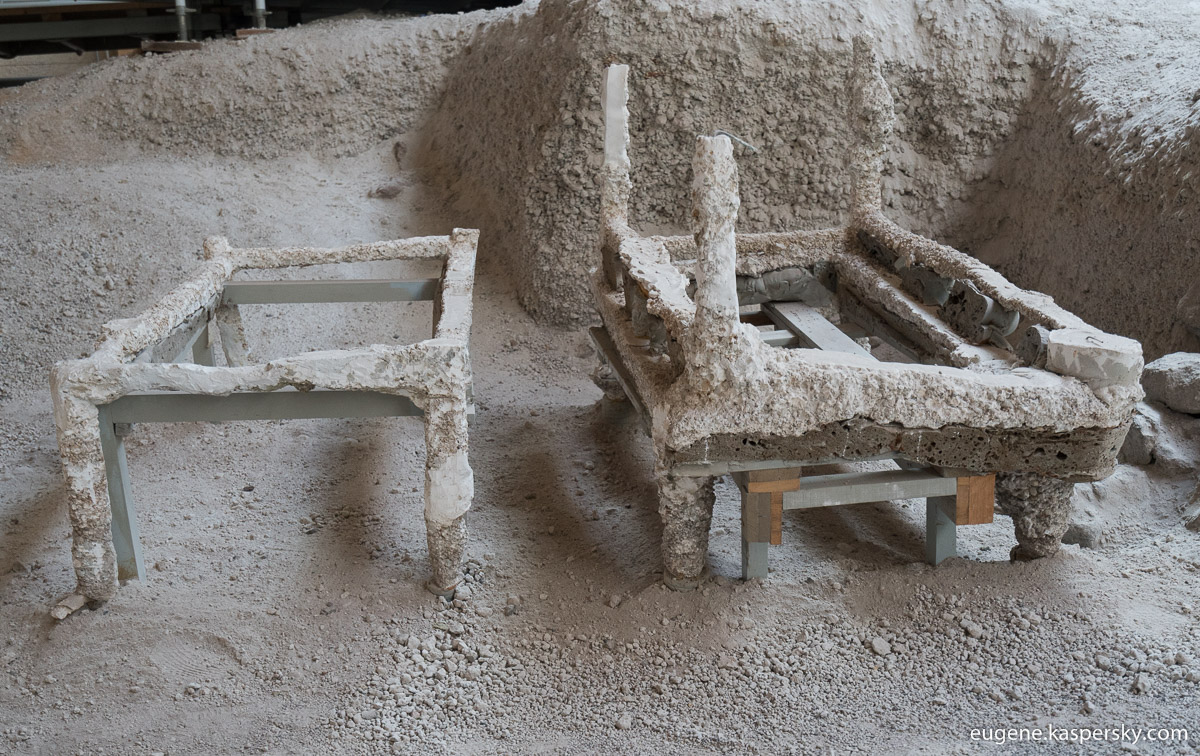 But the number of mysteries that remain far outweigh the things we know about the place.

So who were the Minoans? What language did they speak? Where did they disappear to after the eruption that wiped everything out?

There are no clear cut answers. Even the term ‘Minoan civilization’ is notional: its root – Minos – is taken from ancient legend. What they called themselves or their settlement no one knows. They should have called it the Mysterian civilization :). Or Mi-No-Not civilization!

For example, it is clear that it was an island-based seafaring civilization. And ‘civilization’ is the right word – as the world around it was markedly backward compared to it back then. There was the three-story settlement (three floors 3500 years ago was Manhattan today), there were the writing systems (two alphabets: Linear A followed by Linear B), there was the Phaistos Disc (discovered on what’s now Crete). And judging by the frescoes it looks like their shipping fleet was very advanced for the times. Another thing: windows! Window frames in the walls of houses have been dug up – probably the earliest discovered in the world. In other words, it could be that windows are a Minoan invention! Rather – Santorinian.

By the way, the archaeologists here say that ‘door’ in Ancient Greek can be translated as ‘pair’-something (can’t recall the something), which means ‘next to a window’. And here in the dug-up settlement next to all the doors there’s always a window – probably so that the hallways were always light with sunshine. 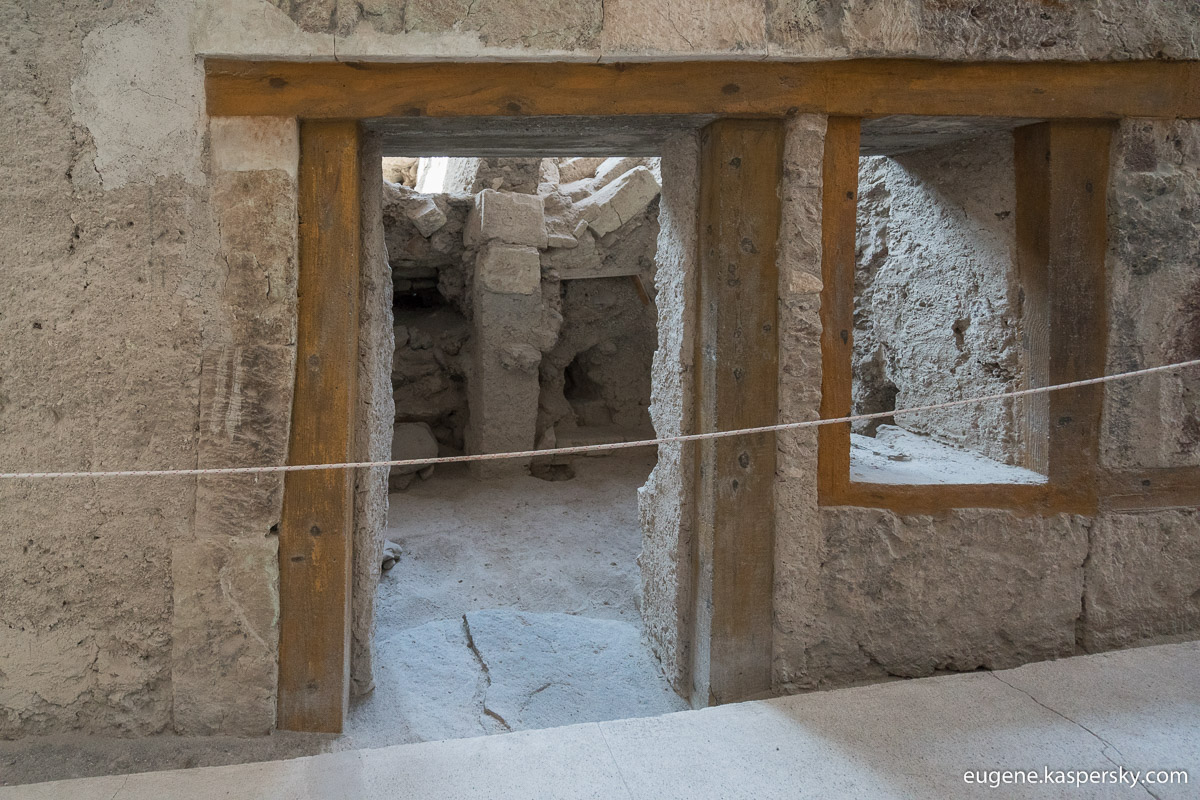 What else is interesting?

It turns out that all the Minoan towns and cities dug up never had any defensive walls around them. This must have meant one of two things: either the times were completely peaceful (which I doubt somehow), or the Minoans’ sea power was so vast that no outsiders would dare go near them, let alone try invade or other some such barbarity.

But, alas, around 3500 years ago the island’s volcano erupted massively. At first there was an earthquake (or earthquakes) which partially destroyed the settlement (or settlements) (of which there is archaeological and volcanic evidence), and then everything was blanketed in meters of volcanic ash. (One good thing to come out of the latter catastrophe was that the ash preserved the settlement, crockery, furniture and frescoes.) Next came a pyroclastic flow, which caused a crazy-high tsunami (traces of which were found 200 to 300 meters above sea level on neighboring islands).

Don’t believe it? Then have a read of the Old Testament. In there it says Egypt was shrouded in darkness for three days. The timing seems to coincide…

And that was that. A great civilization literally wiped out and away: destroyed by an earthquake, buried in ash, then washed away by a tsunami. Gone. Vanished. As if it had never been there in the first place. Extreme. Odd. Sad.

I think that the meaning of existence for the whole of humanity (i.e., all Homo Sapiens) is… to pass an exam. Yes, an exam. Quite which exam, I don’t know. But the dinosaurs didn’t pass theirs. The Minoans didn’t pass theirs. And that’s why we, Homo Sapiens, need physics, mathematics, astrophysics, quantum physics and all the rest: to predict, to get ready, to adapt, to reflect and to survive. Anyone against?

For those of you really curiously interested in the historical aspect, a few more Wiki-links for you:

But to quench my thirsty curiosity, I headed over to Santorini’s museum. If ever you’re here, just remember it closes at 15:00… 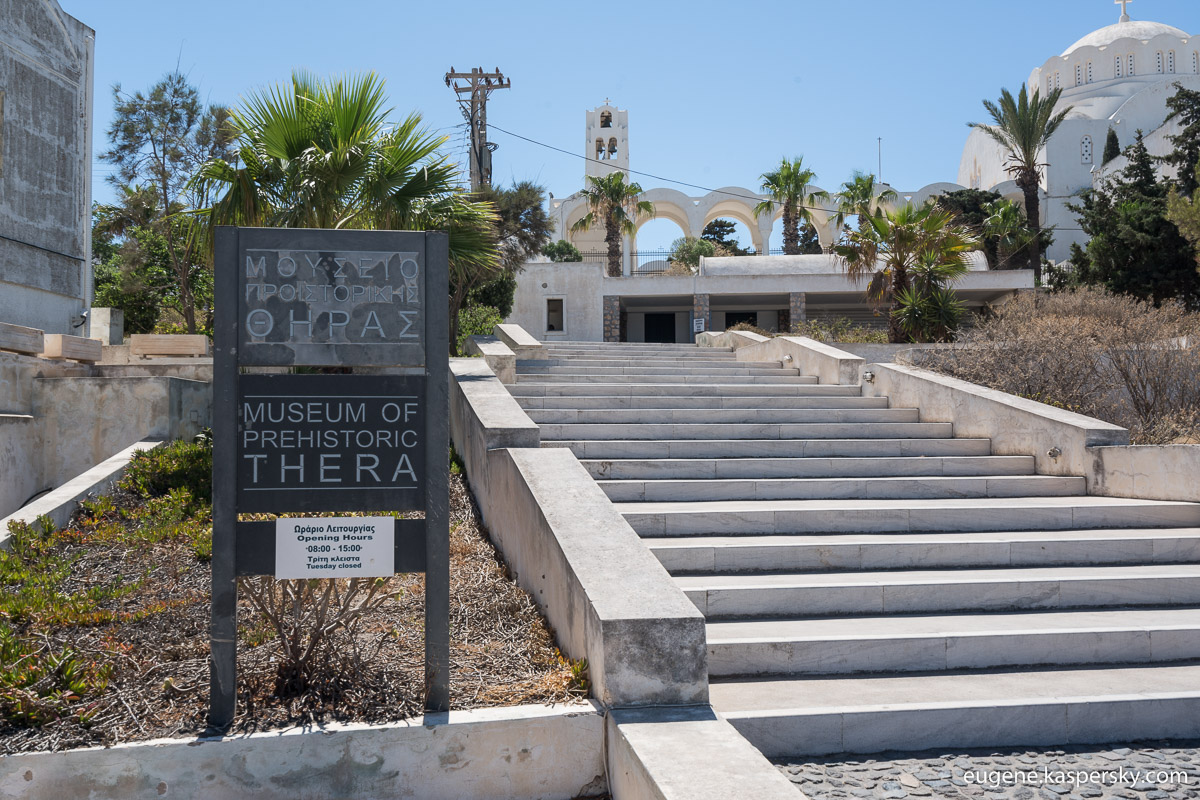 Crikey. This is something. The Museum of Prehistoric Thera is crammed full of stuff dug up on Santorini from era of Akrotiri and later (and eras there were many). This is must-visit, plain and simple. 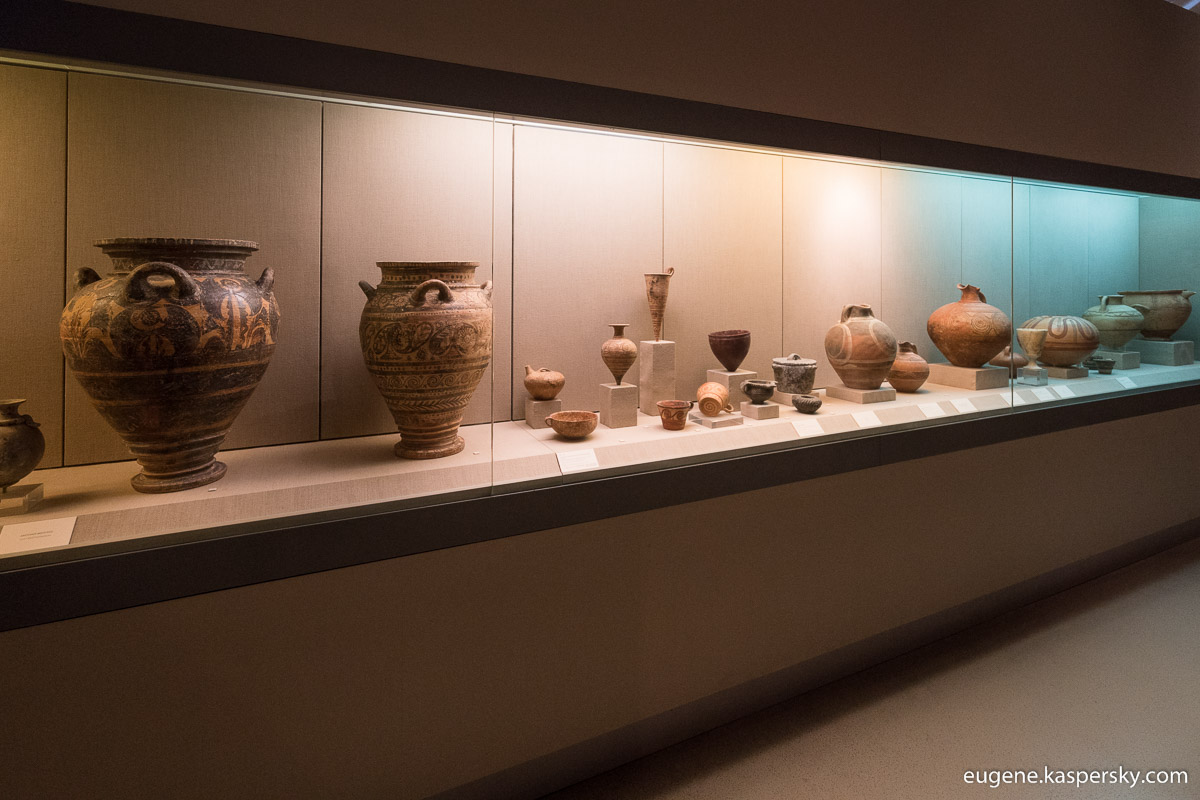 The Akrotiri digs only appear grandiose in the photos. But in actual fact they’ve only dug up around a quarter of the territory (that covered with a roof). The other three-quarters is still buried under meters of ash. All the same, what they have dug up is mind-blowing, for it’s from 3500 years ago – the Bronze age. Check out some of the exhibits: 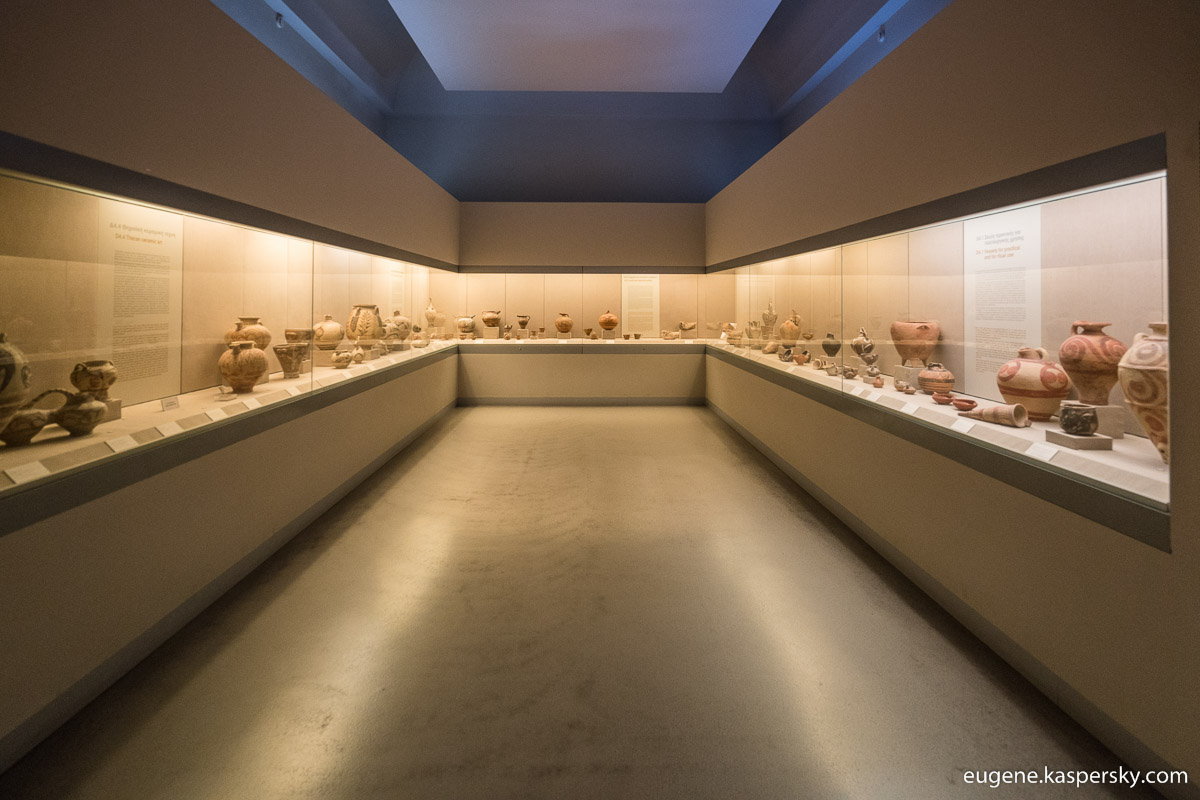 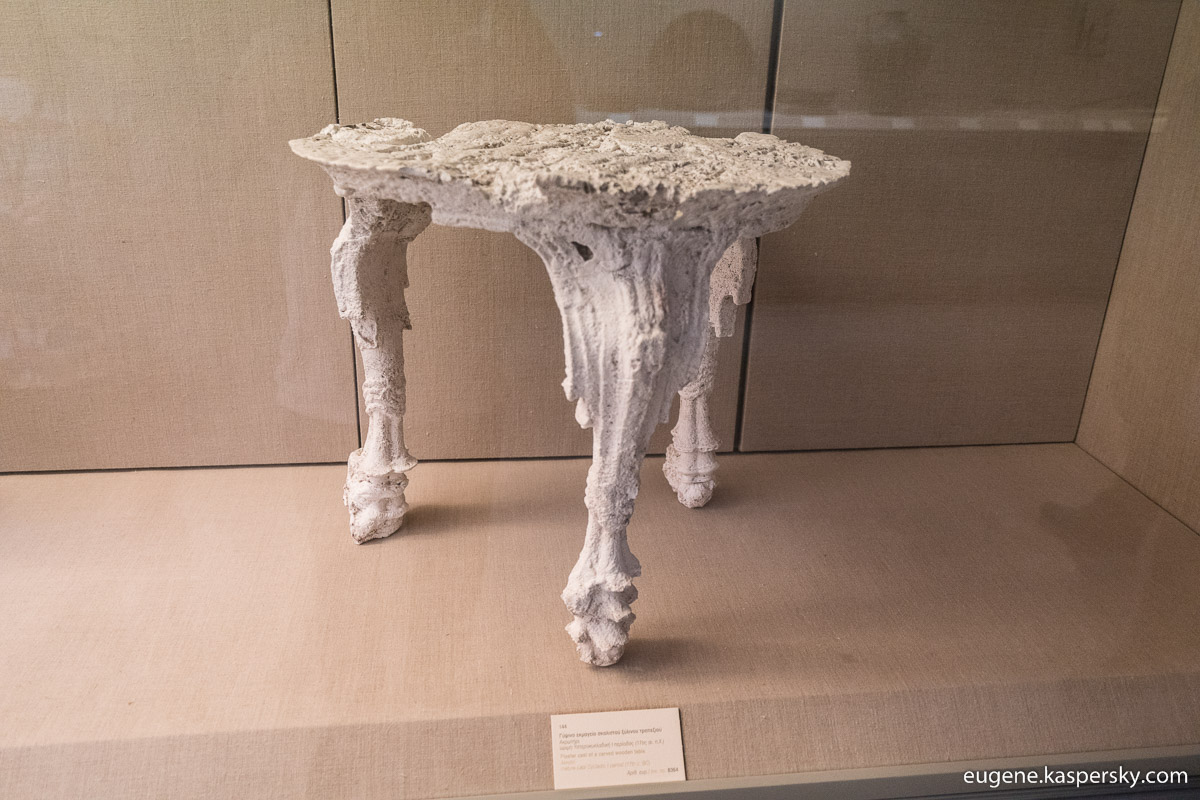 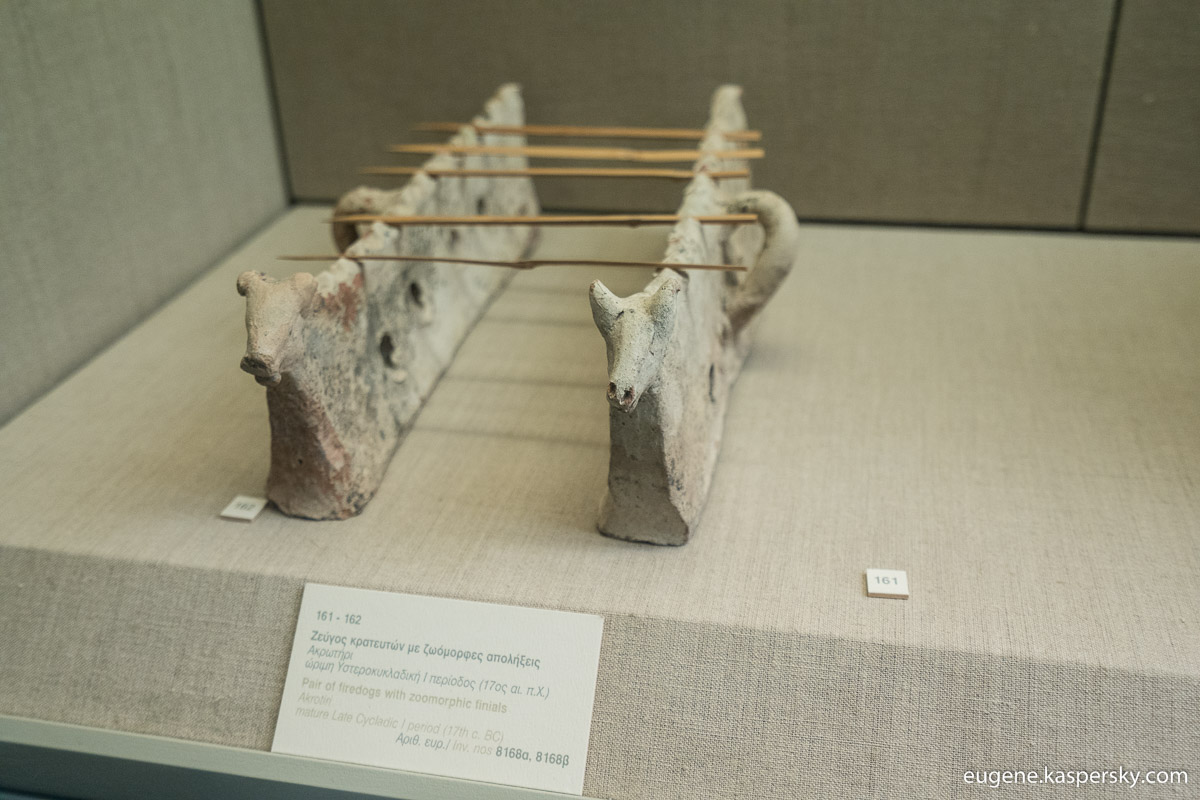 But for main course: the frescoes. They depict people, faces, clothing, and the surrounding world. You can get a good idea of what life must have been like for the Minoans…

What were the climate, flora and fauna like in Santorini? These days it’s an arid sun-scorched resort, but back there were rivers, animals and even palm trees – all portrayed in the frescoes. Also horned mammals, the surrounding landscapes, and more folks. From 3500 years ago!

Now for a bit of negativity…

The archaeological digs at Akrotiri and the study of the ancient era here were largely halted in the early 2000s, simply because the money ran out; at least that was the main reason. Digs and studies did carry on but at negligible levels. It’s not as if massive sums are required even, but at least some money was needed, but there was none.

A sad tale. But it gets happier. Find out how in the upcoming posts…

All the photos from Santorini are here.