What’s that whooshing sound? Ah, it’s me rushing from Cancún to Venice, to attend a business event the next day :) 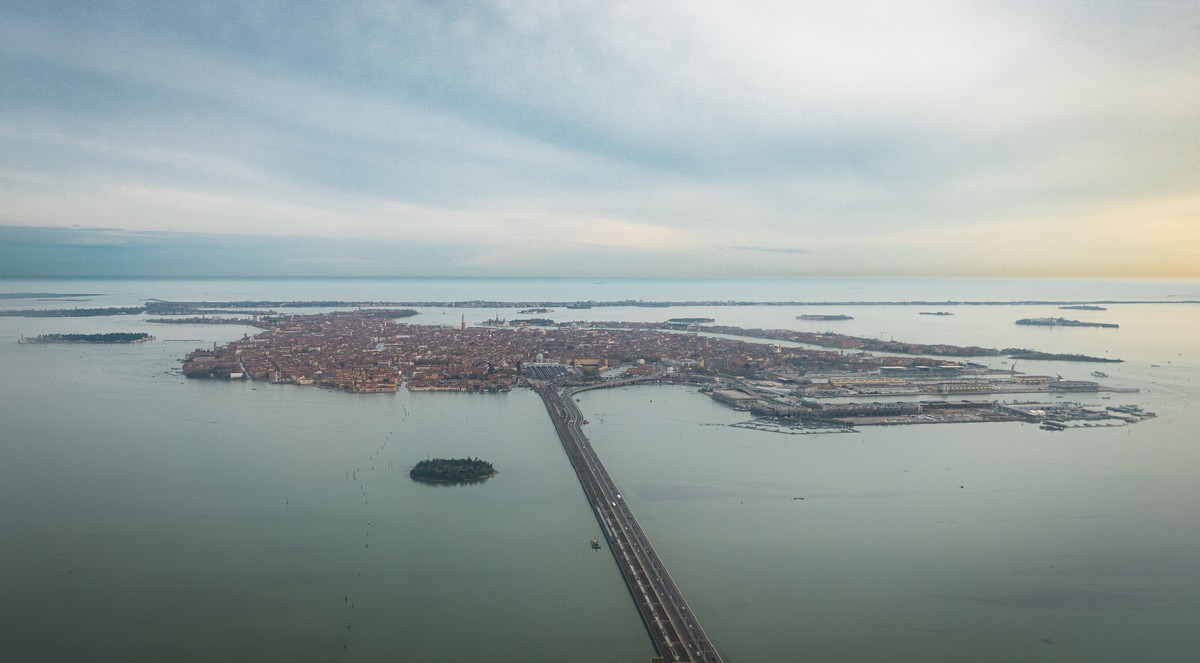 I got to thinking about my previous visits to Venice and how I usually arrived by car. In fact, I hadn’t flown into Venice airport for about 15 years! This time, they told me I shouldn’t be too surprised about their unusual new arrivals terminal. And it really was unusual – or, at least the parking lot: 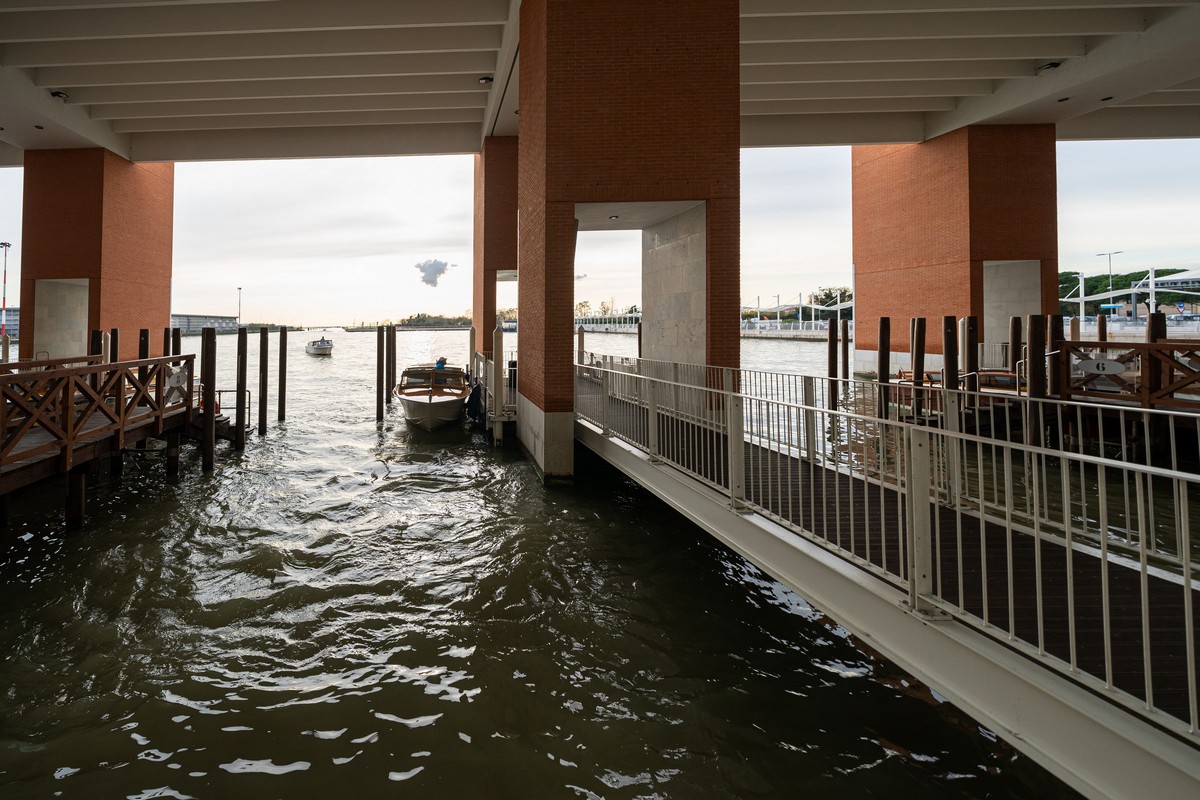 That’s right! You can take a boat from Venice airport (which is on the mainland) straight to the islands on which Venice lies.

Here’s my suitcase next to the taxi: 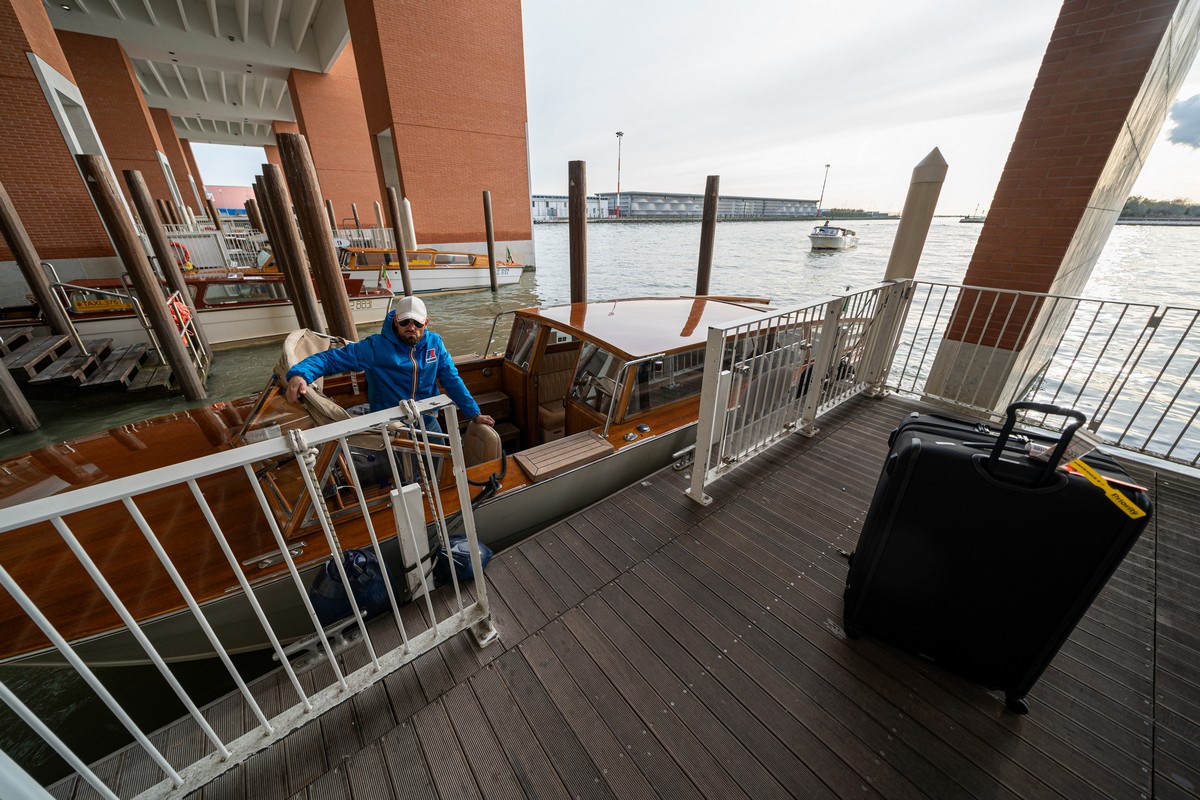 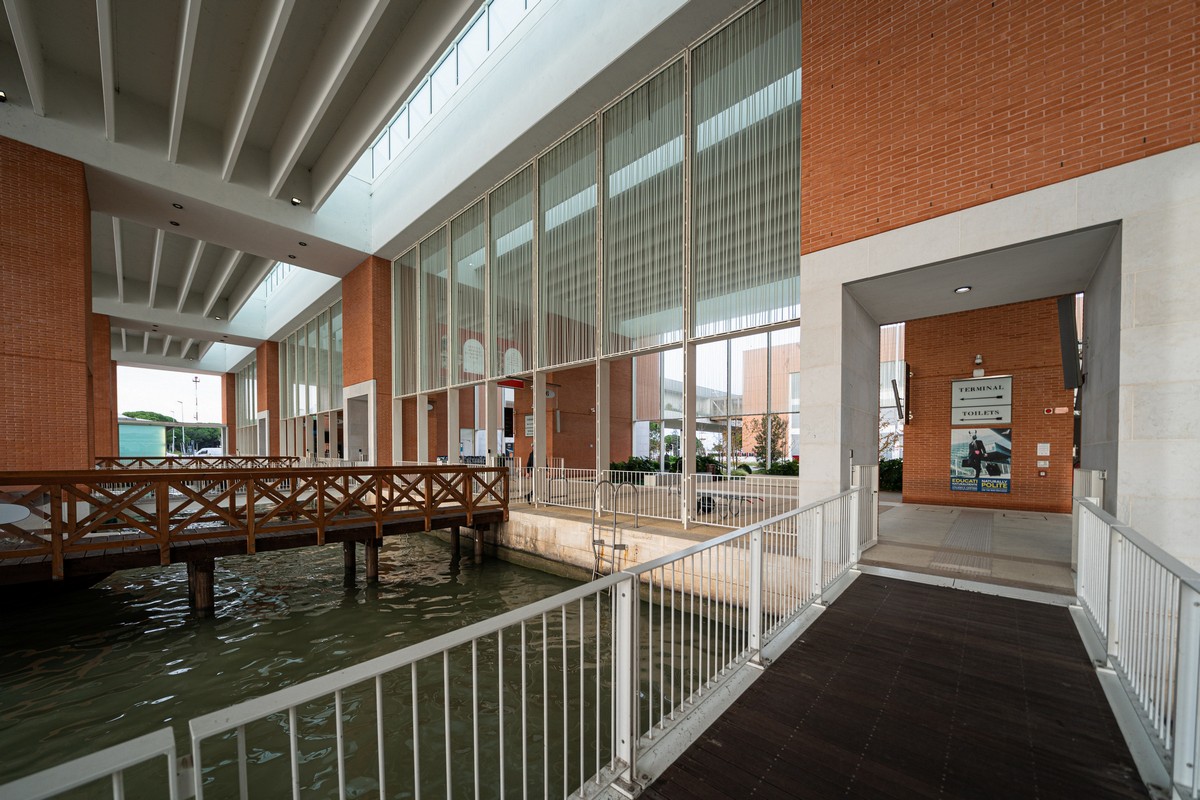 I’ve only ever experienced this – getting off a plane and straight onto a boat – once before. That was at the airport on the Bora-Bora atoll. Can’t think of any other place where you can do this.

Wish I could take a ride on a fast boat across Venice’s expanses. And I wish it was a more pleasant season rather than a cold November. But I suppose we should be happy whatever the season :) 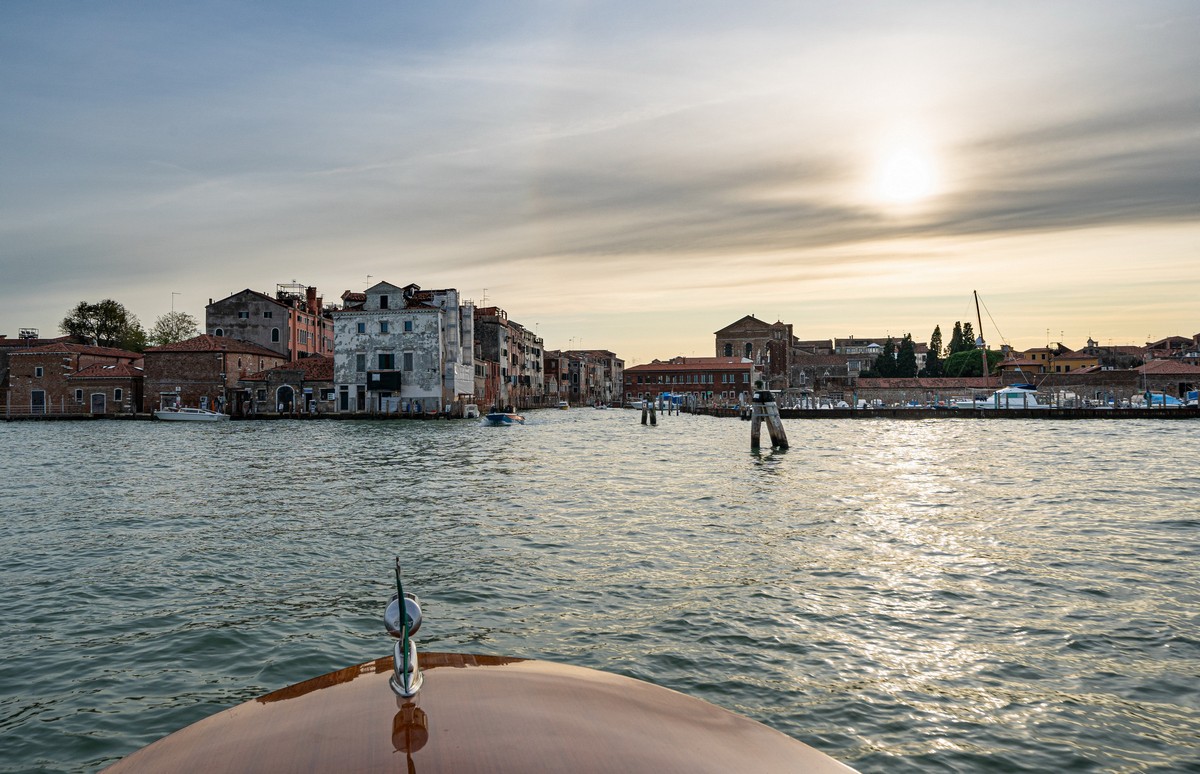 Venice from the “other side” doesn’t look as festive as the Grand Canal or the main waterfront area… what’s its name? Ah, yes, Riva degli Schiavoni (I somehow missed that). So, well, Venice doesn’t look quite as picturesque from the rear:

An ambulance station. Interesting. Never seen them out on a call. 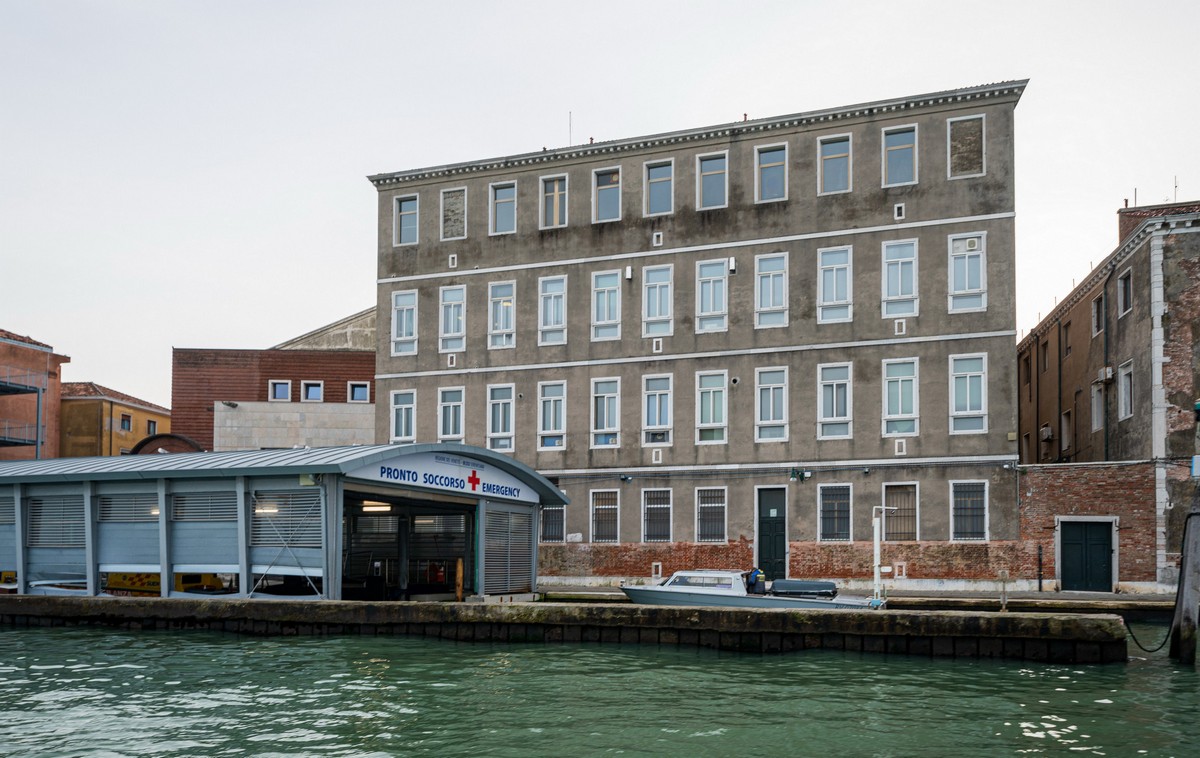 Naturally, all the municipal services here work on boats. The water supply and sewage services travel around the city in motorboats equipped with diving gear (I’ve seen them with my own eyes). Police boats, complete with flashing lights, have priority on the waterways (seen that too). Obviously, the ambulance service works in the same way (still to see them, but perfectly plausible). 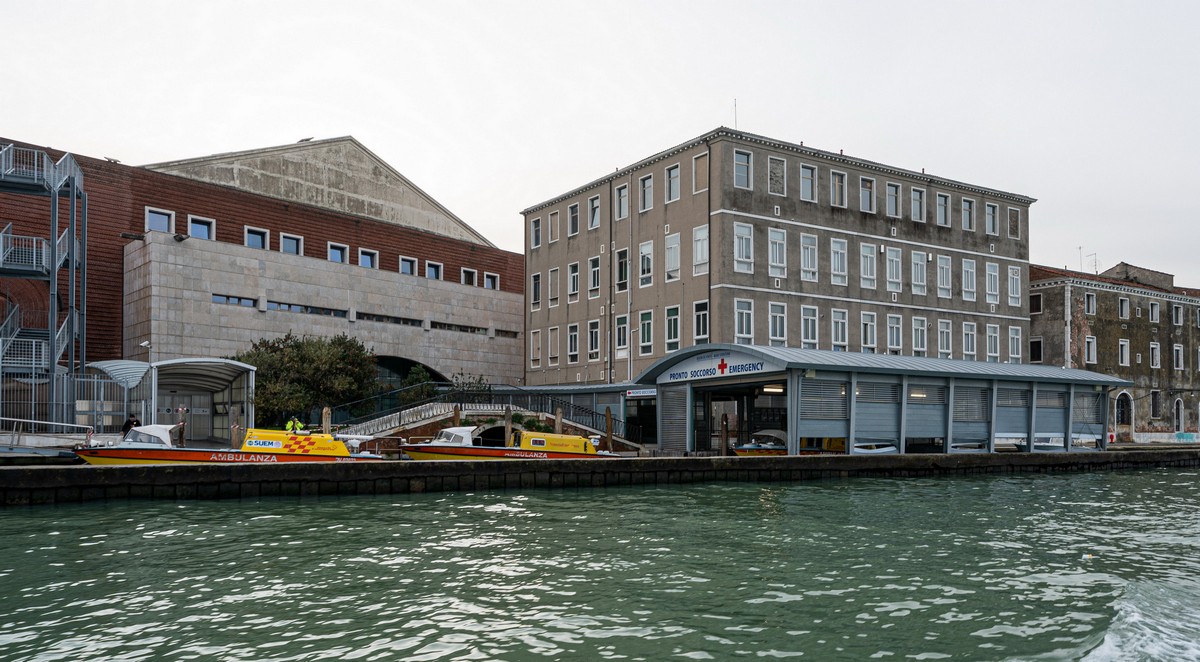 A perfectly decent-looking hospital is located nearby. It even looks like a new building. Importantly, old buildings are protected here – they are of historical significance and must not be renovated. New buildings can be built on the sides, but nothing can be done to the inside – never ever. Apparently, the modern-looking structures are built around the older walls.

And now my boat makes its way onto Venice’s driveways … waterways, is probably the right term. 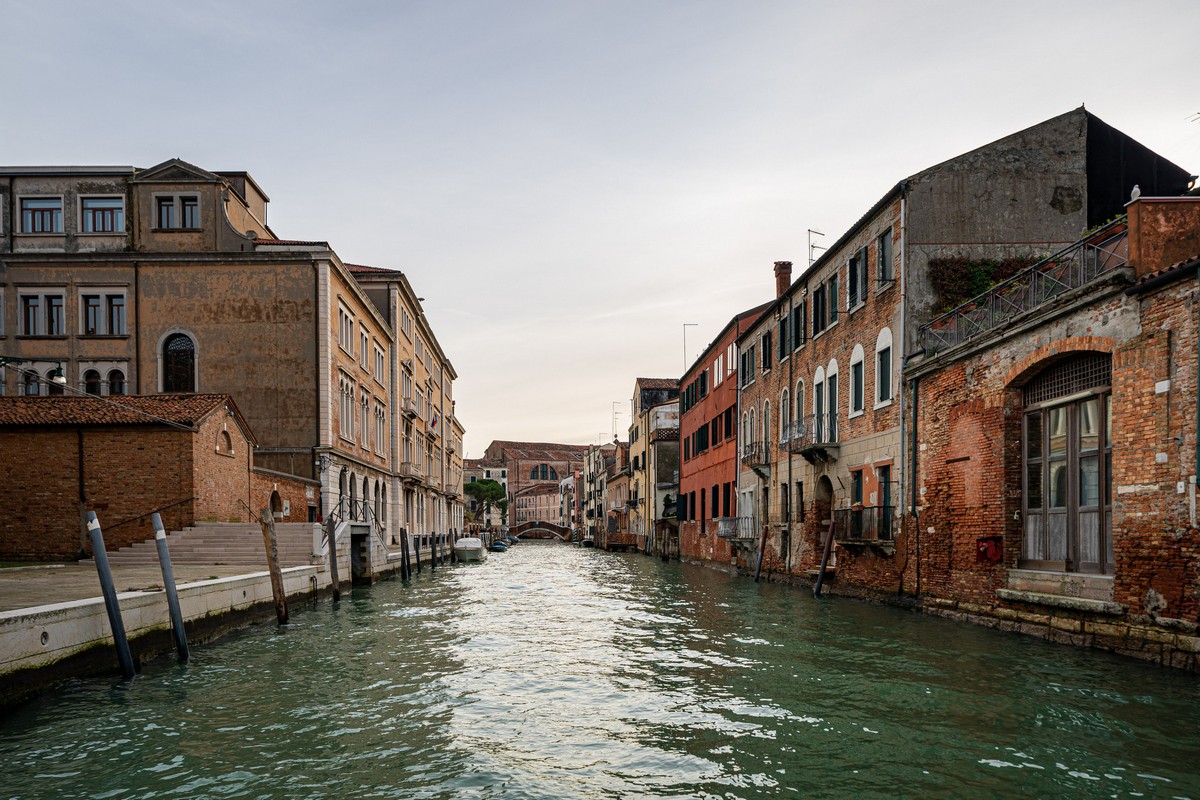 We were so lucky that our regular partner event was planned in Venice for these particular days. The event took place just two days after that Venice flood! The water rose two meters above its normal level. According to those ever-truthful interwebs, it’s been more than 50 years since a disaster of that scale hit Venice. 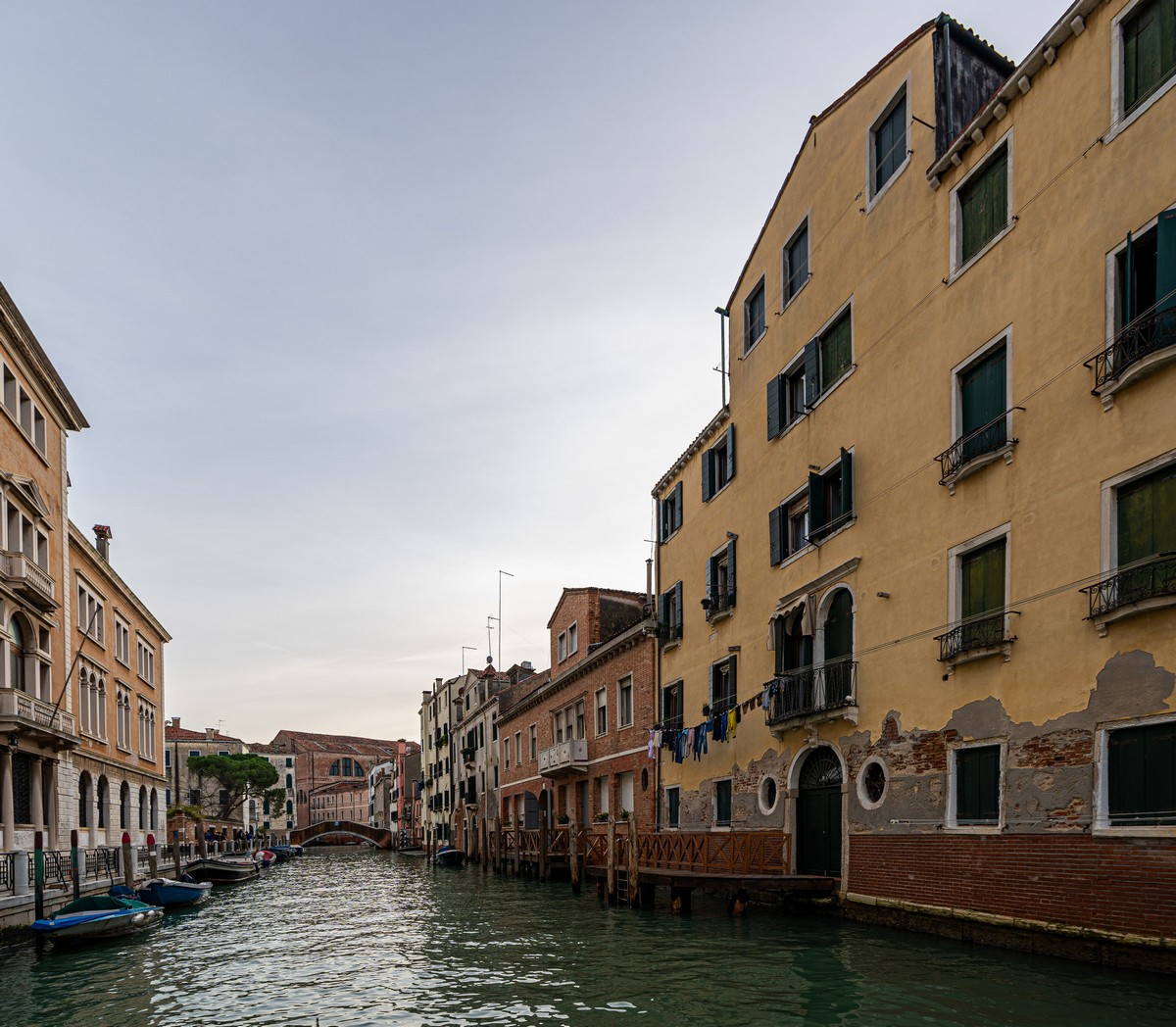 The internet also swears hints that the floods caused billions of Euros in damage. Some spiteful individuals I know say that Italy received 20 million euros in aid, while freezing Russia with its /* с temperatures and “an economy in tatters” (с) */ sent 1 million euros’ worth of aid, which caused a major scandal in local Italian circles because of Italian greed and stinginess.

While the gossips gossip, let’s have a look at a Venice devastated by the recent catastrophic flooding. 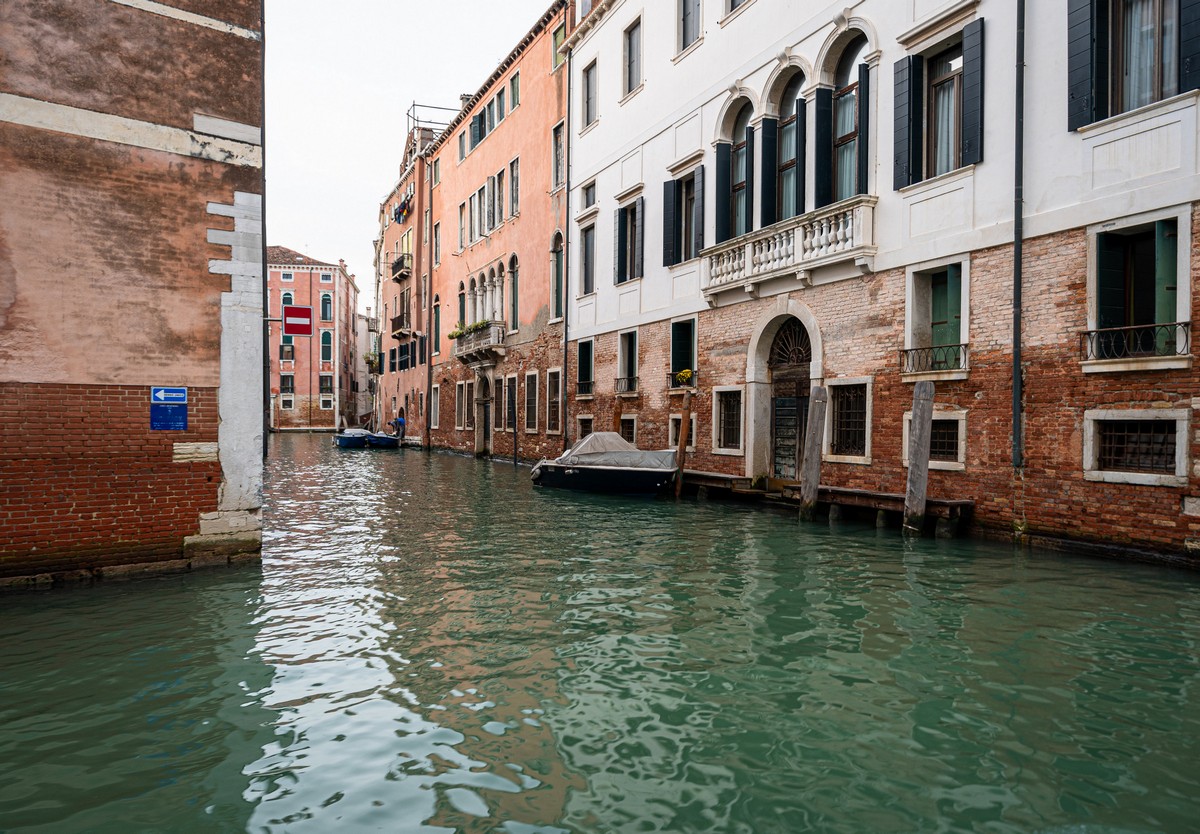 Just look at that: 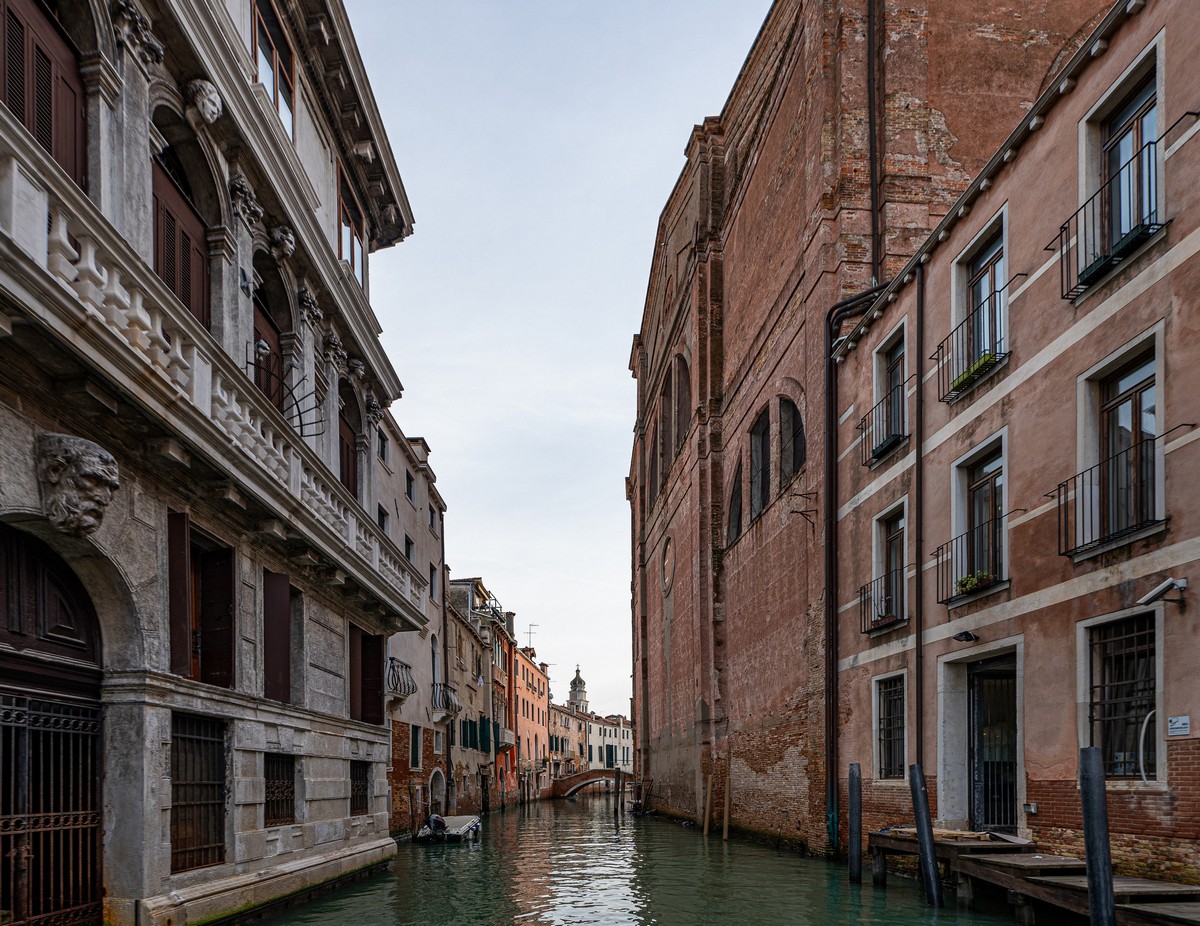 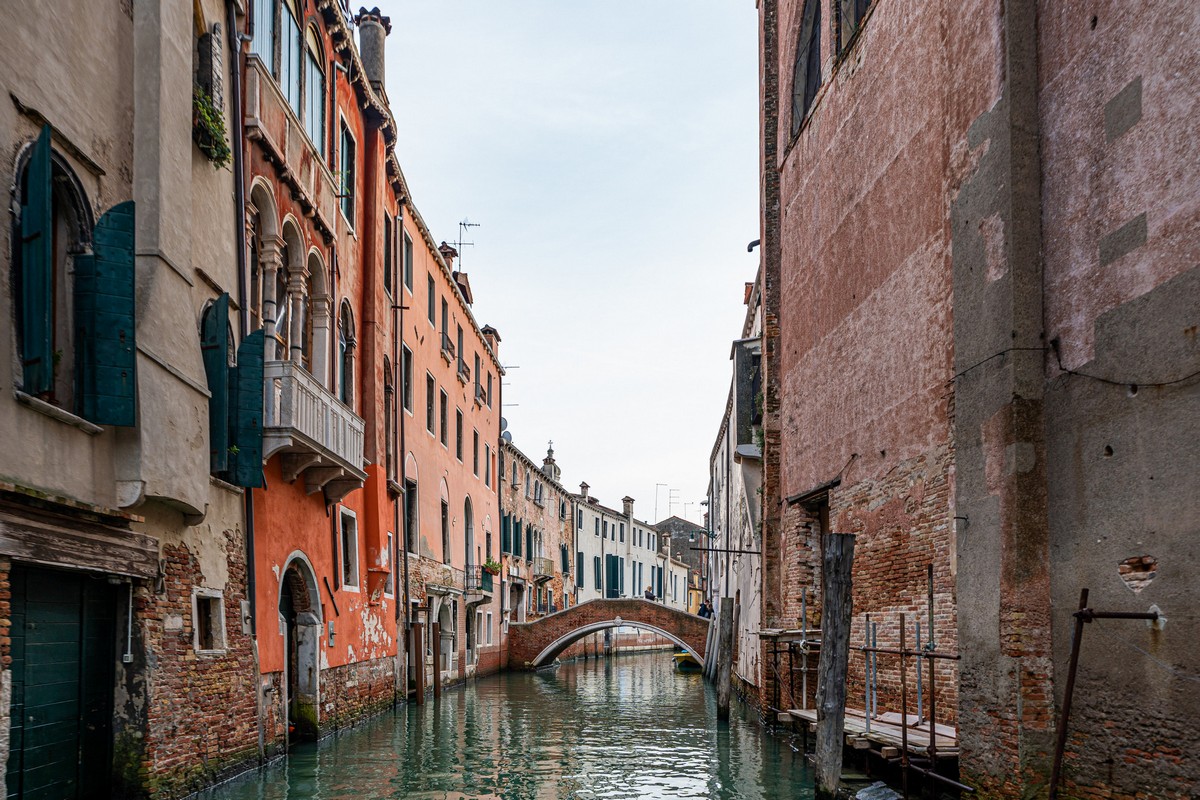 It looks to me like the bricks haven’t dried yet, the stucco has come off here and there (though that could have been due to earlier floods). 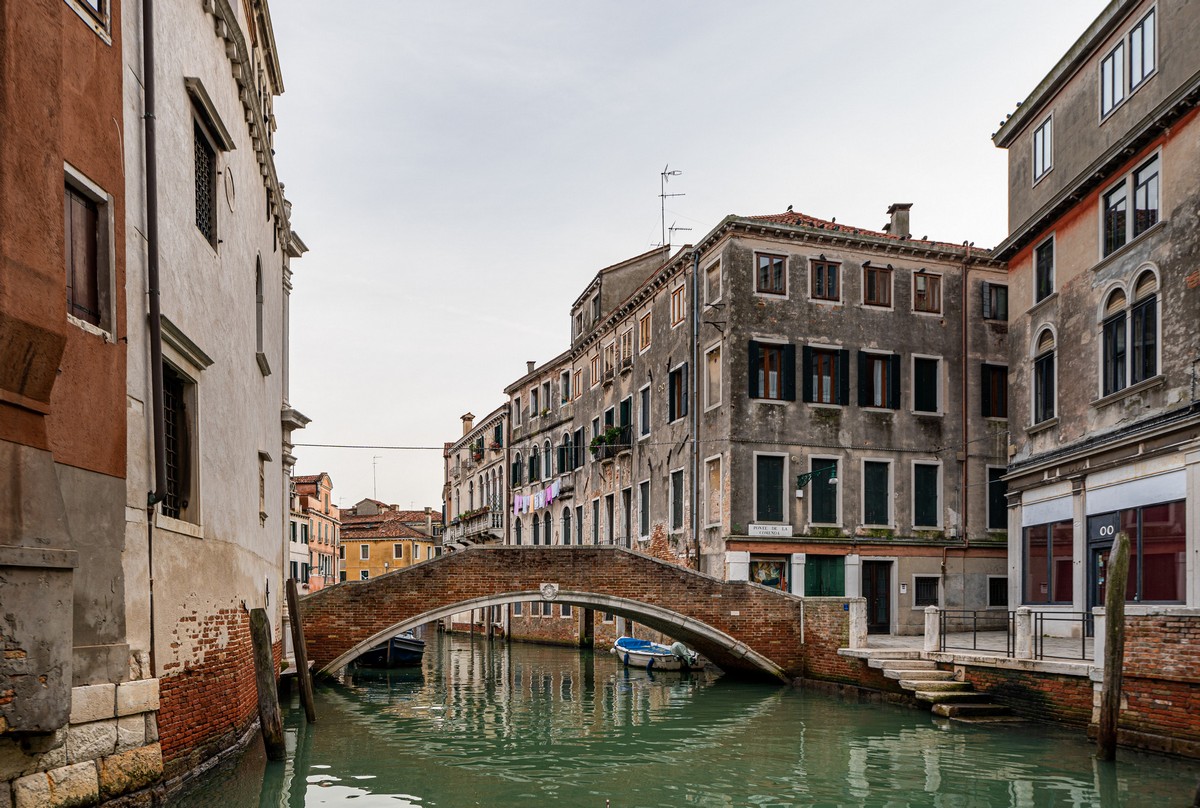 Maybe the inner courtyards were damaged? Let’s take a look… 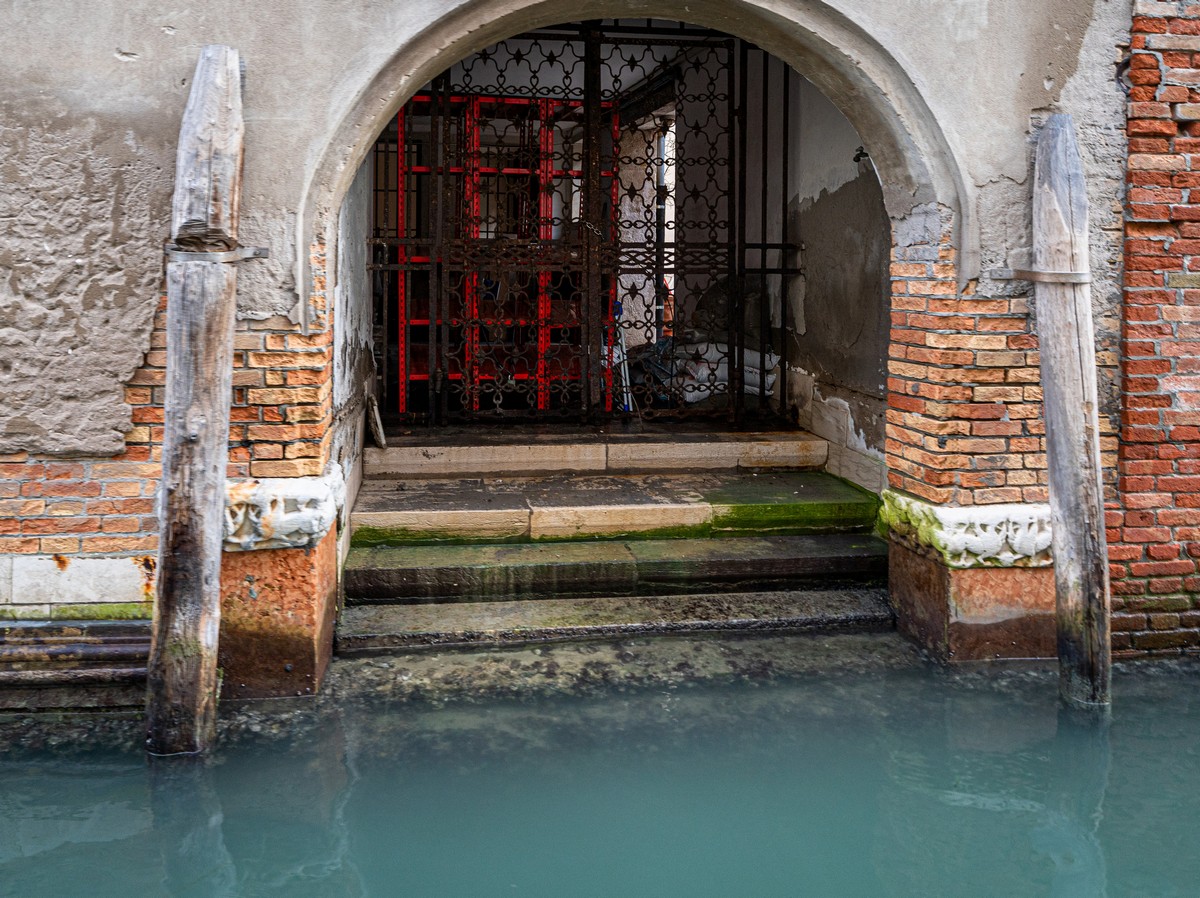 This one’s locked. But there are other backstreet areas:

There’s a little garbage, dampness, some sludge and algae. But for the most part, it doesn’t really look like anything terrible has happened. How do they do it? The water level was nearly 2 meters above normal, but two days later it looks as though nothing happened. Well done, Venetians!

Meanwhile, we are approaching the main thoroughfares. 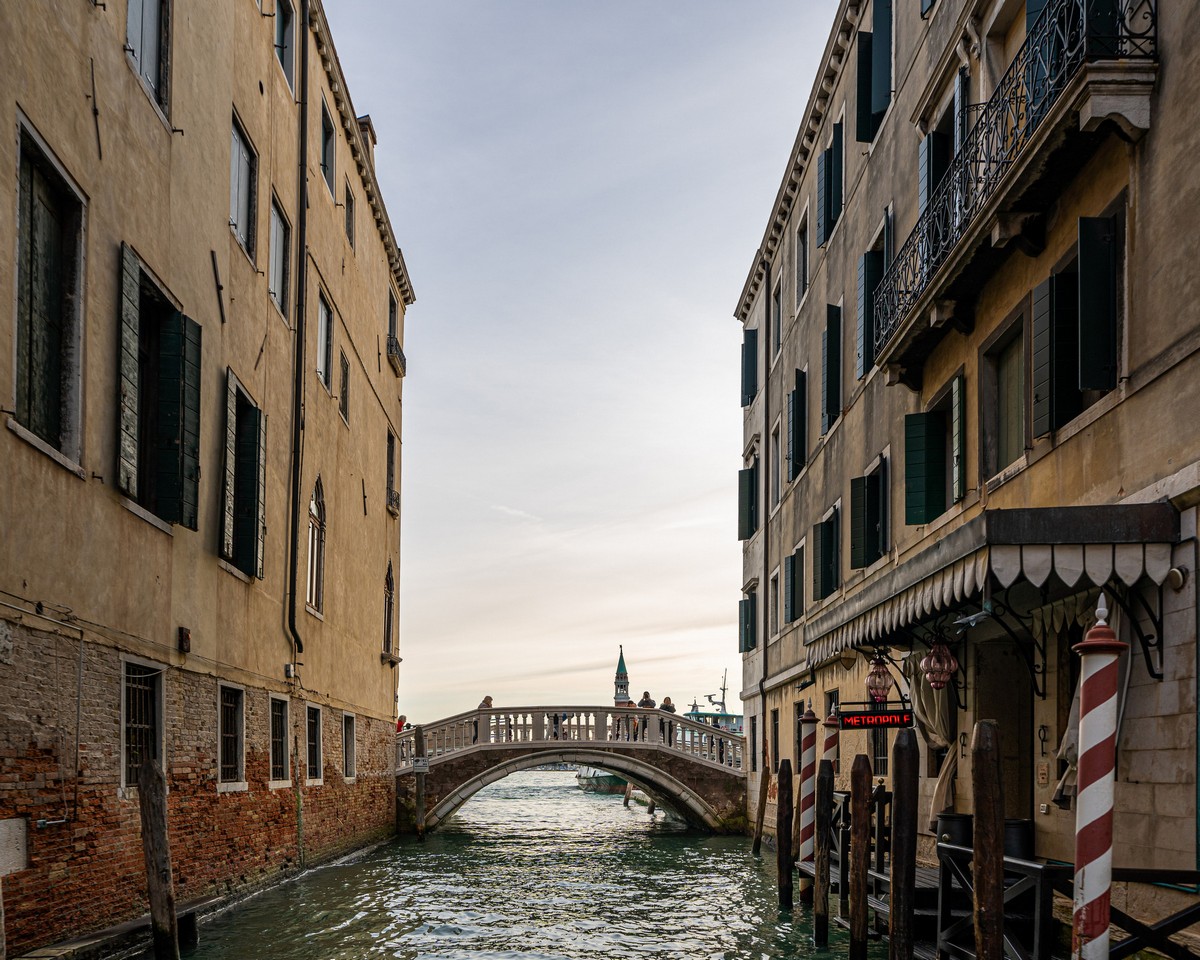 Now we’re at the main embankment. 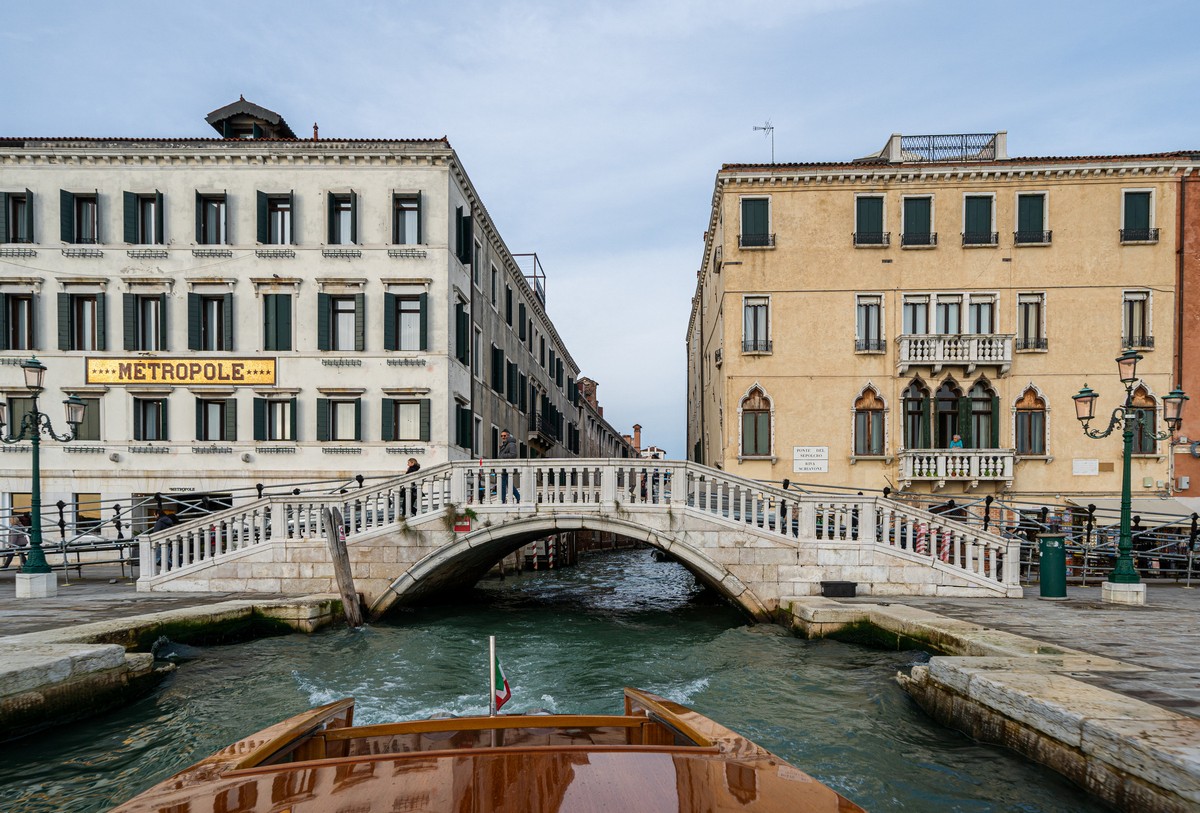 This photo turned out well: 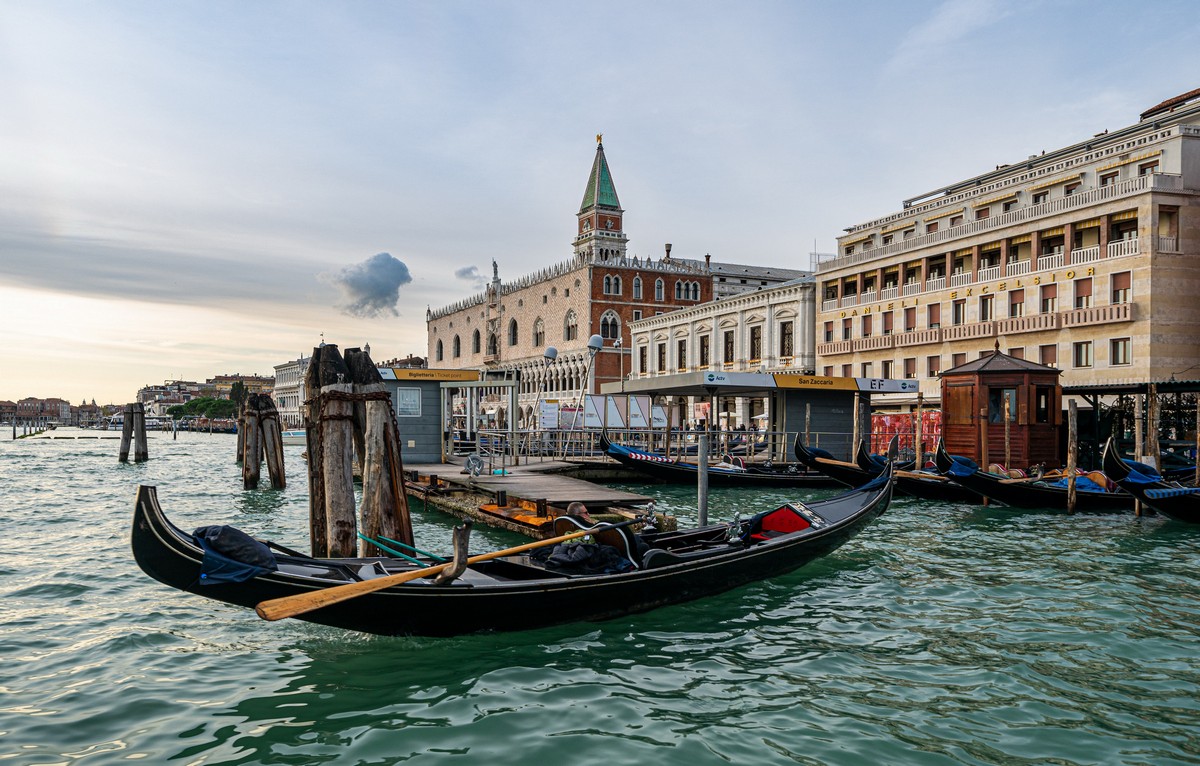 Turning towards the hotel -> 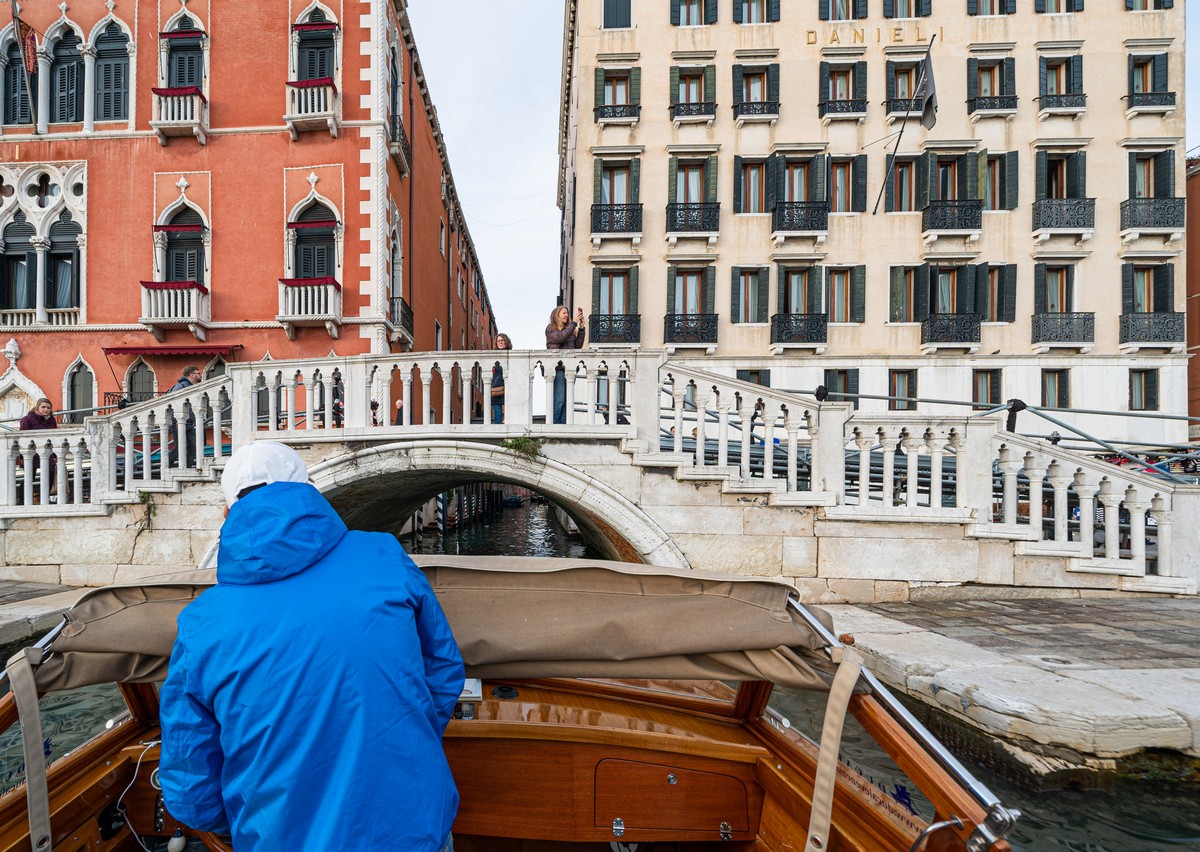 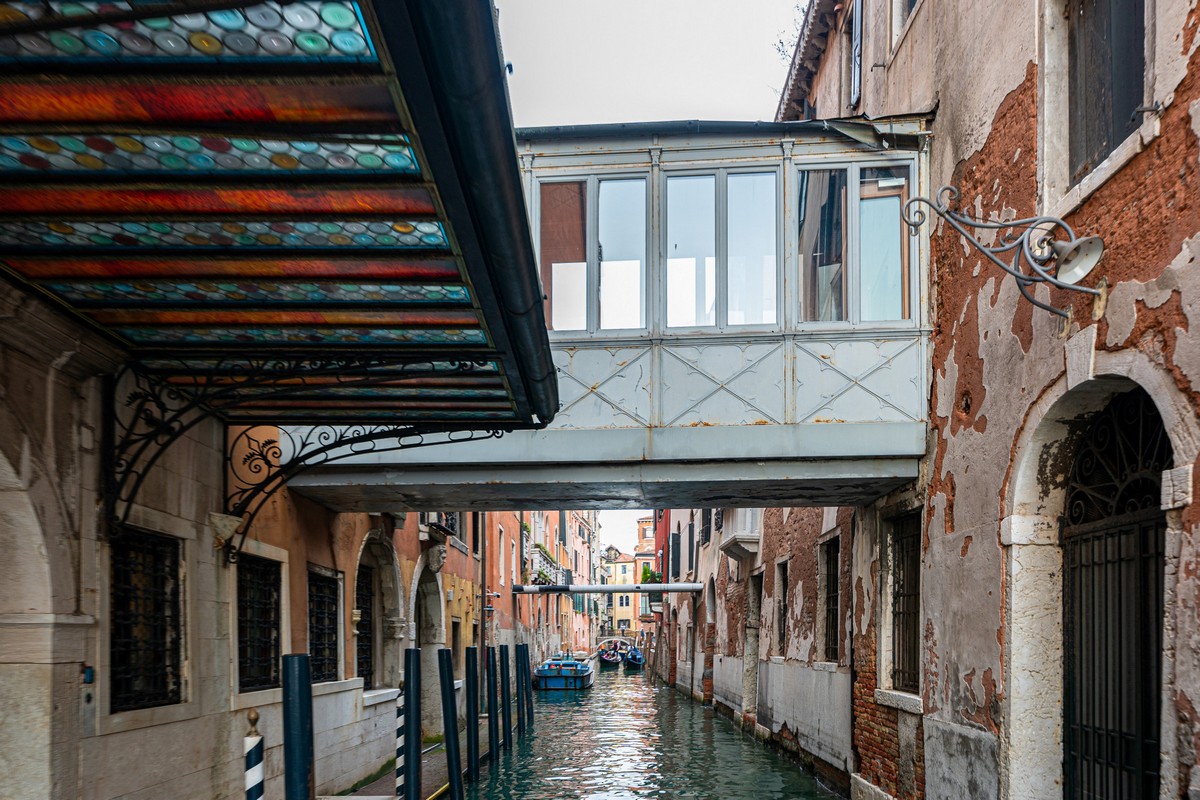 I have to agree with my dear readers: Venice is one of the most wonderful cities in the world, in any season. Even in November.

Here are some raised walkways that the locals and hapless tourists used during the flood: 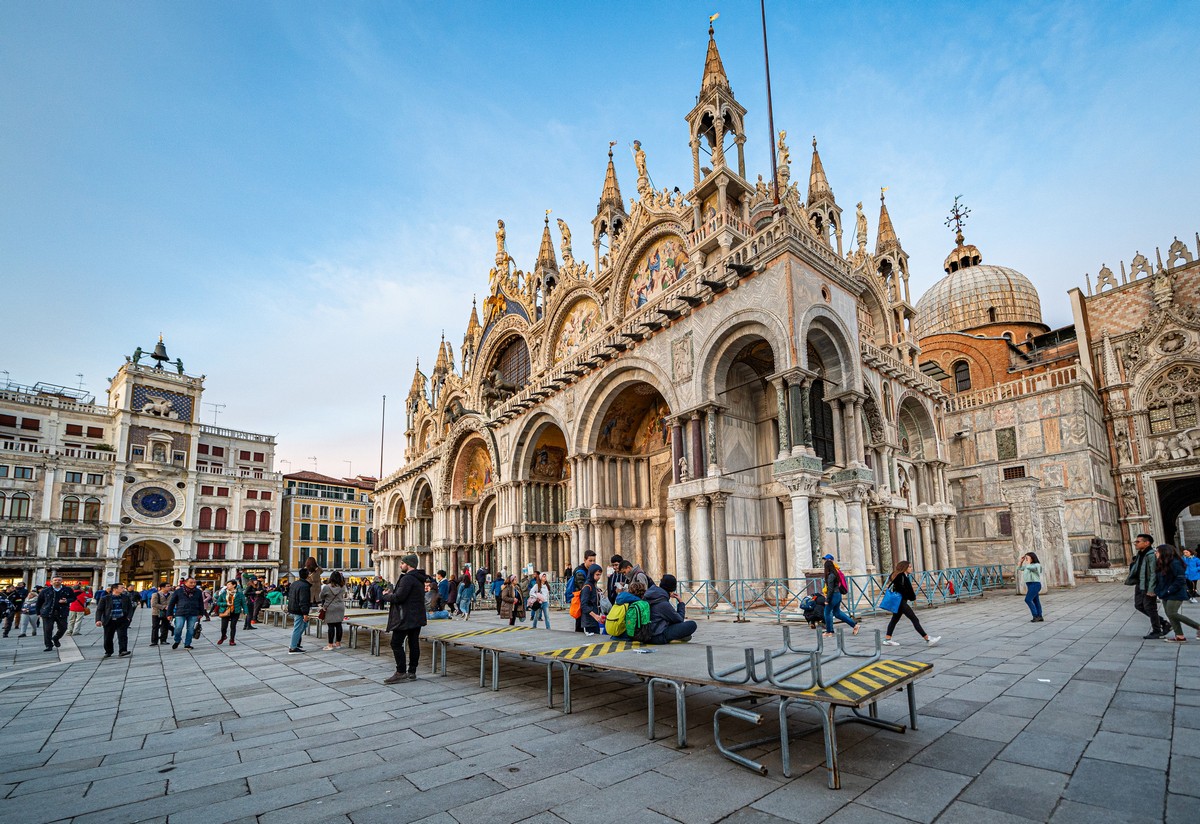 By the way, some tourists were unable to change their travel plans, so they arrived here in rubber boots! Don’t laugh, I’m being perfectly serious. You could bump into people who looked like they’d just arrived from a farm. Quite a sight :) 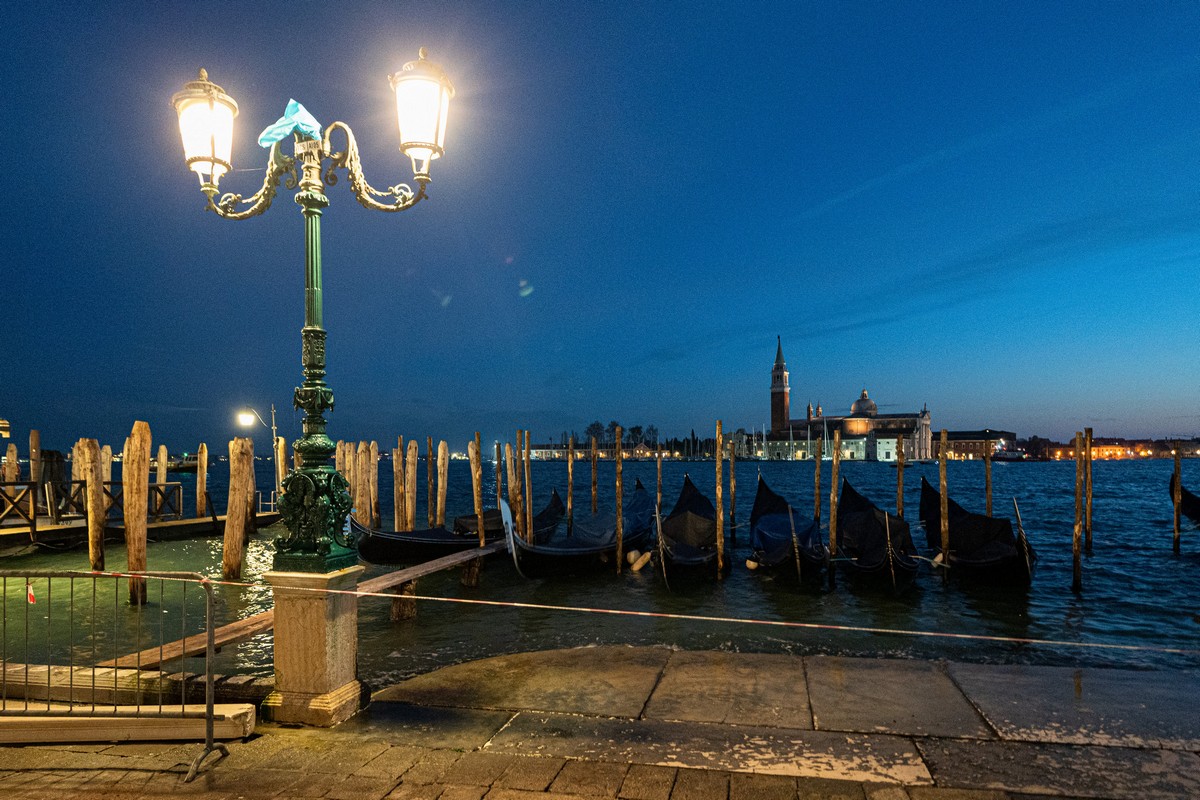 It just so happened that our stay here coincided with a Modern arts biennale. Of course, we couldn’t possibly pass up the opportunity to pay a visit. 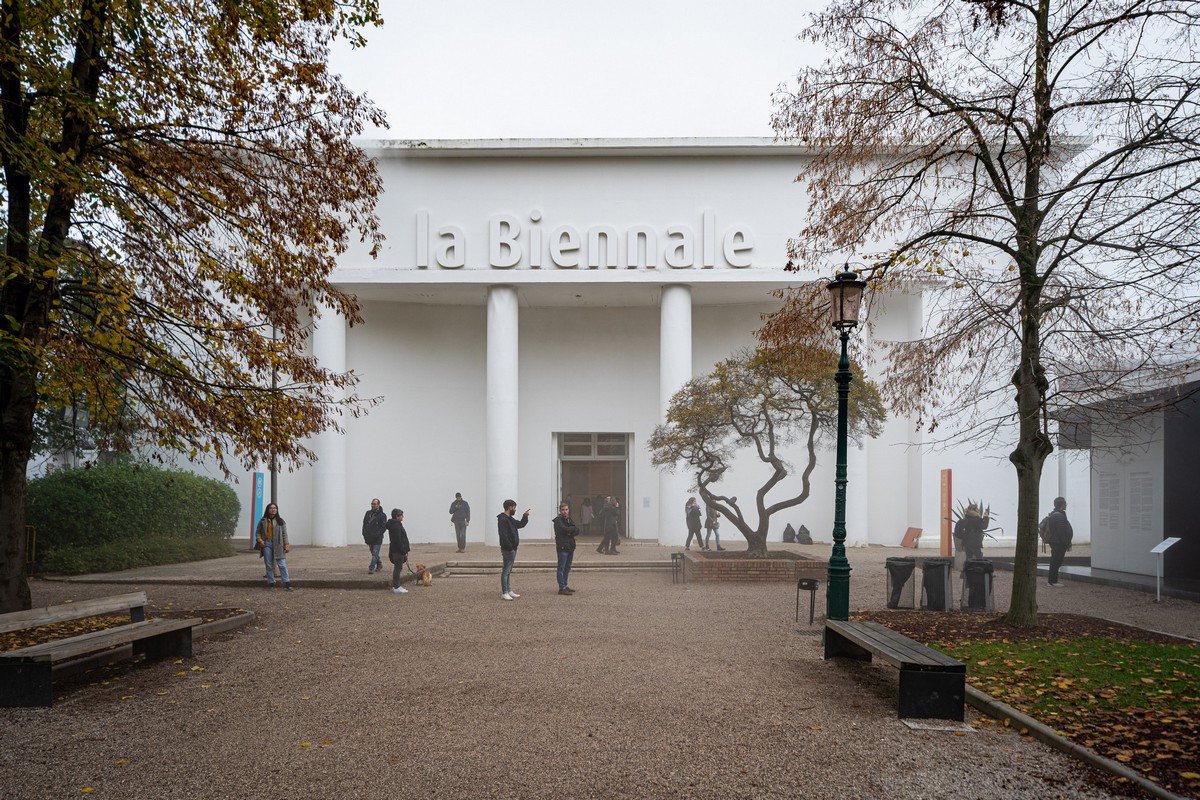 So we went along… 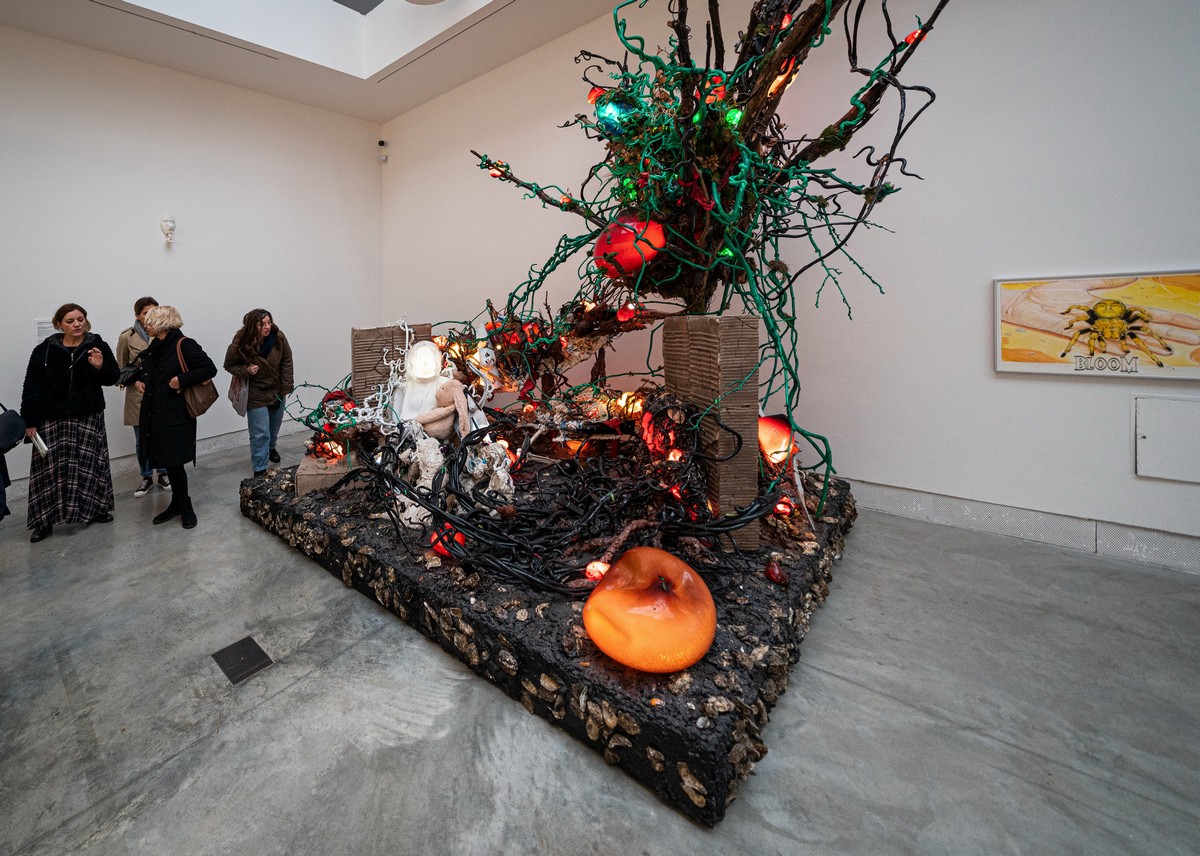 And here’s what I don’t understand. I’m probably ageing too fast and fail to get excited about these new progressive trends. I’m starting to see in them not the delight of the finished creation, but ashes and decay. Art installations like this leave me feeling depressed. Perhaps, I really am getting too old to appreciate it.

What am I supposed to see in this tumult of feelings? The passions and turbulent impulses of the artist? In my humble opinion, it’s just some junk from the scrap heap. 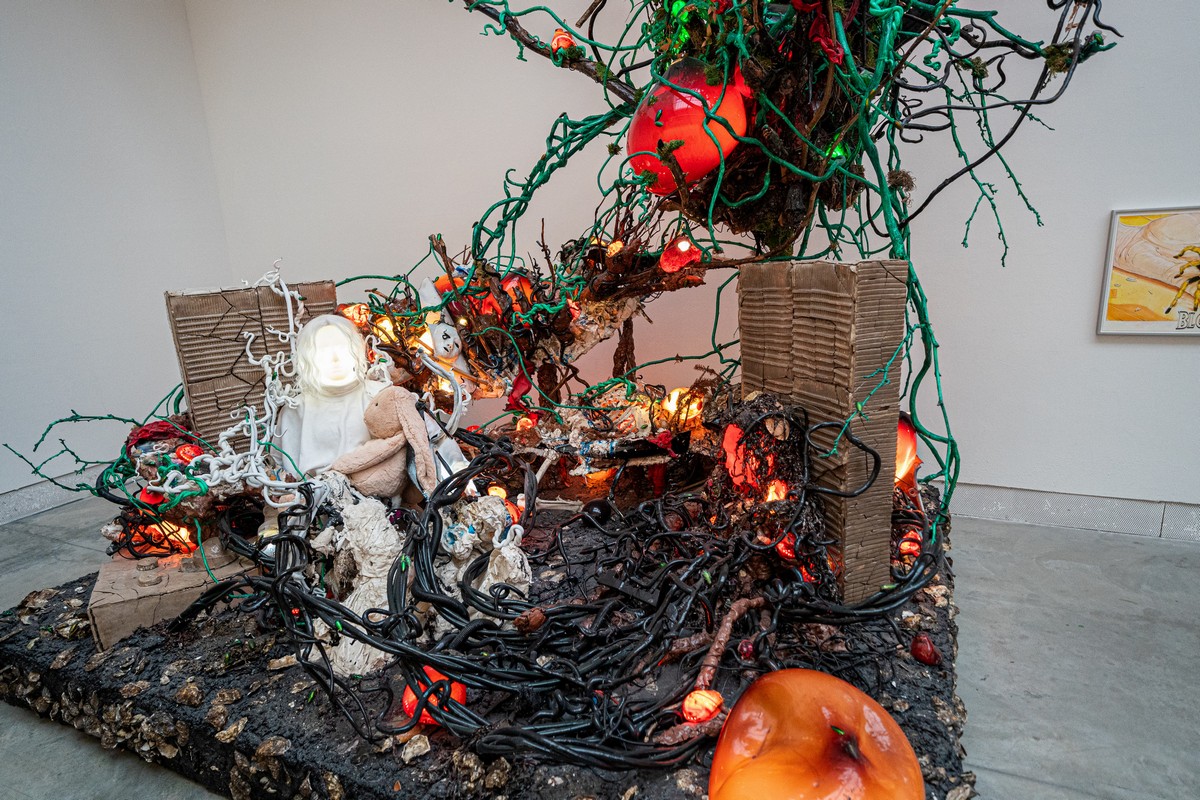 But there are some pictures at the exhibition that catch my eye. For example, this one, titled ‘Rafting down the river’. I was quite taken by it for some reason. Not sure why. Perhaps the faces, the motion, or just the fact of rafting down a river? I don’t know. 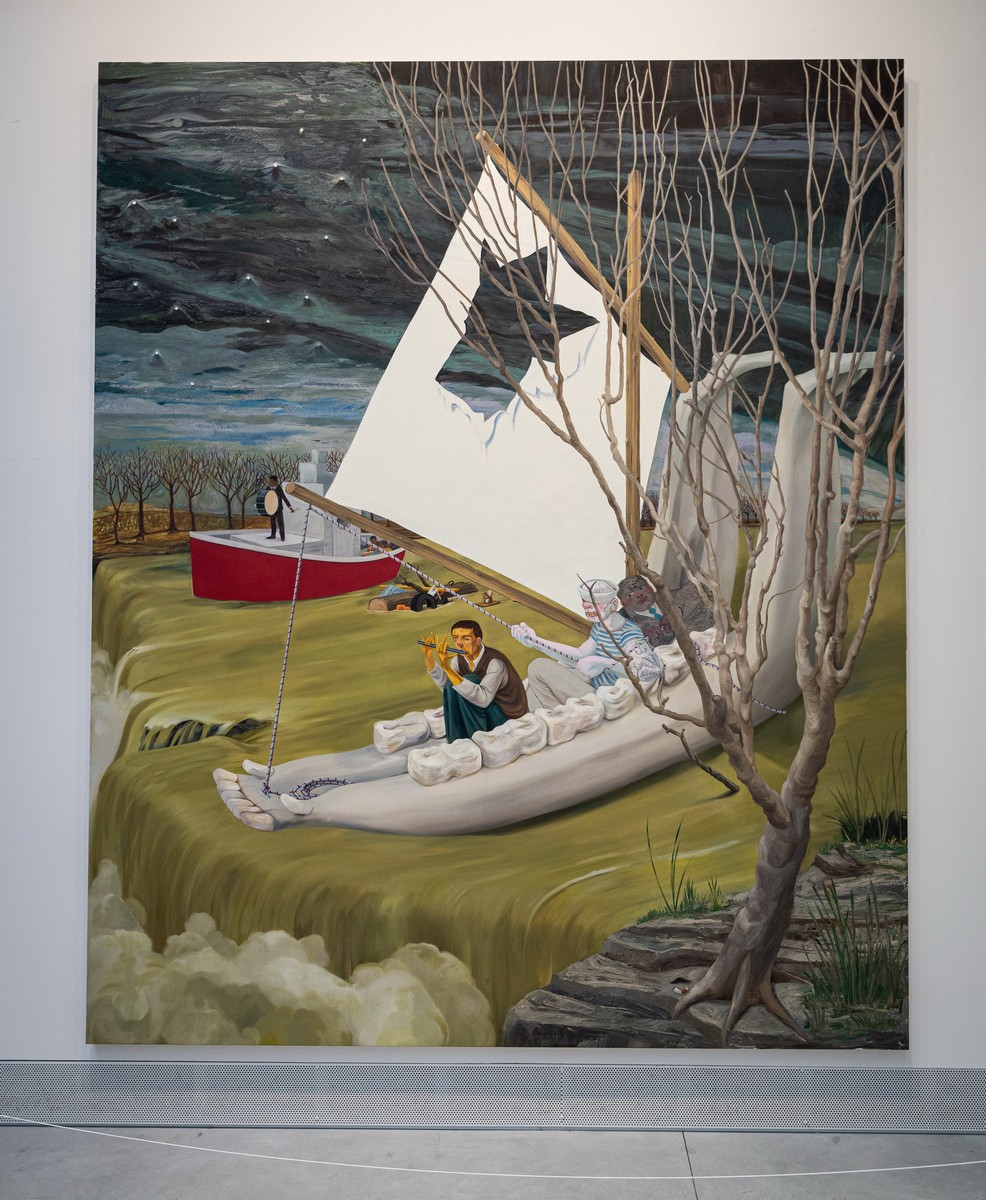 But everything else is just rubbish. Some oil on canvas, at best. And at worst, it looks like a KUKA hand (that’s the mechanical KUKA robot, in case you don’t know) has sprayed some colored fluid in an enclosed space. Is this art? Any lazy techie could produce this type of rubbish. Namely a lazy techie, because a normal techie wouldn’t have time for this kuka-bull, I beg your pardon.

Needless to say, I didn’t bother taking photos of that garbage. You’ll just have to take my word for it. Or google it if you really want to make sure.

So, when I went out onto the open-air patio, I fancied it was just a patio, not part of the exposition. The patio was very nice. 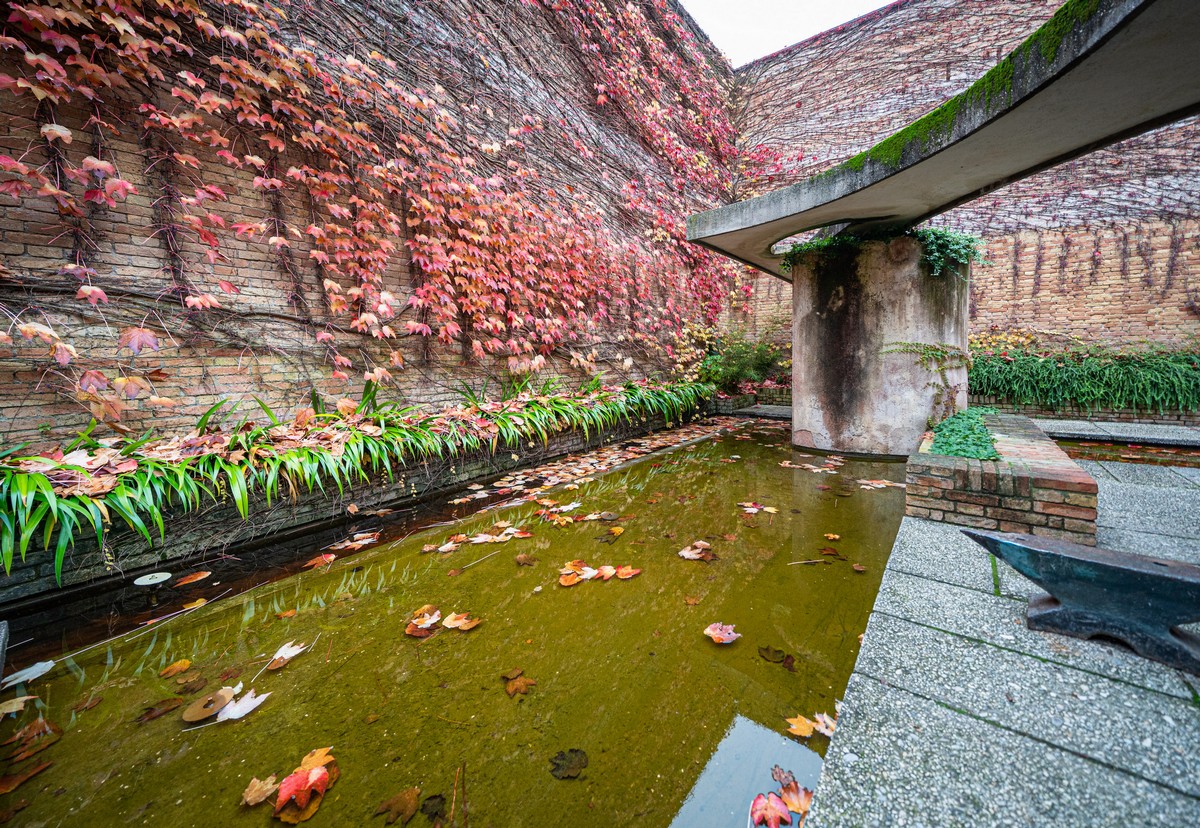 These two guys are pretending to be impressed by their master’s paintings: 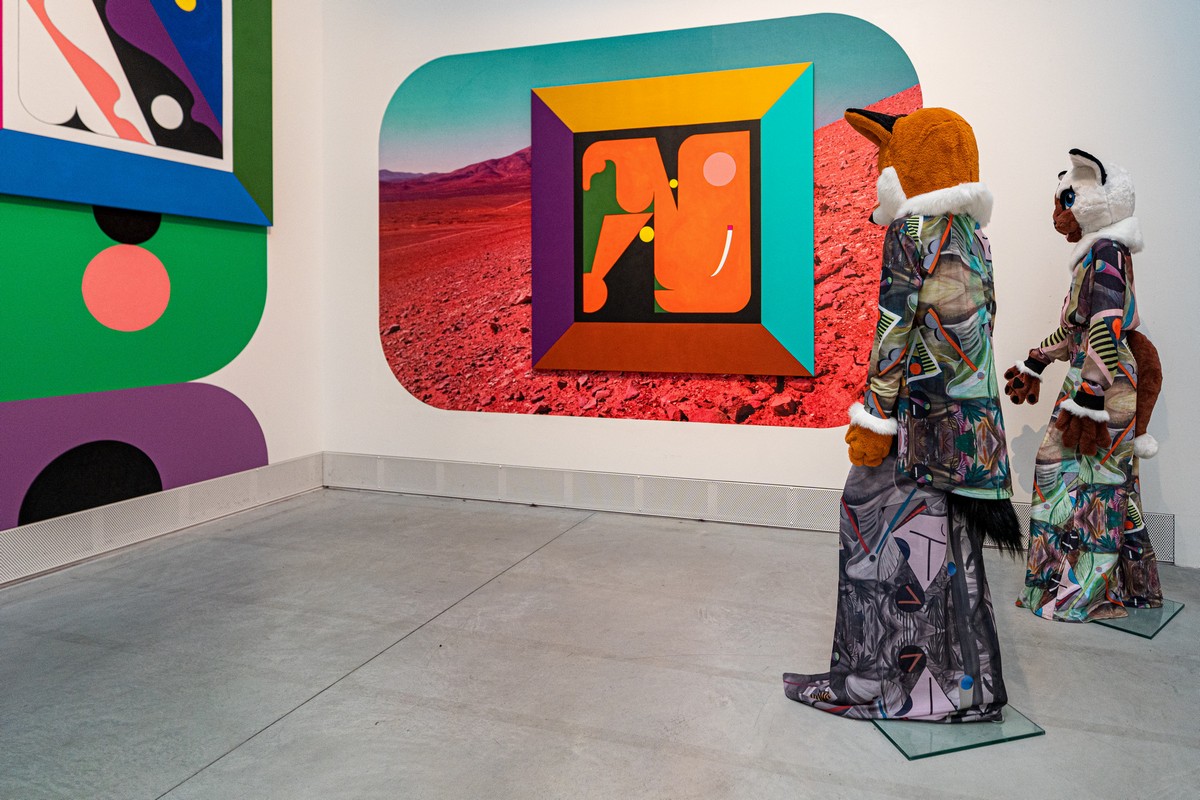 I’m telling you, it’s true. The author of these wall-mounted images assembled, sewed and installed these two cute creatures to make a “composition”. To make it look as though even animals appreciate “high art”. But I came to a slightly different conclusion: the talented artist is much better at sewing together life-size animals. 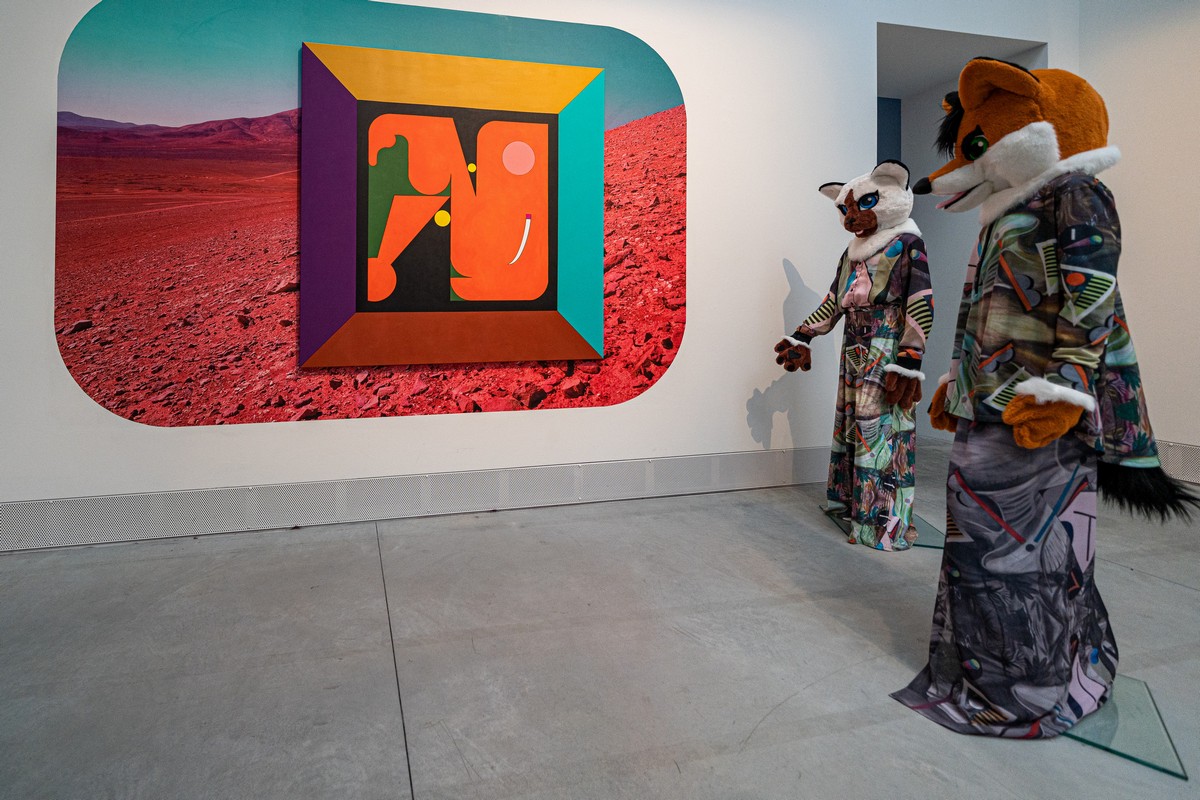 It appears I’ve grown coarse and uncouth in my old age, and can no longer appreciate such high-profile exhibitions and biennales. Even the exhibitions in the Pompidou Centre upset me now rather than just disappoint me. Or are the cunning art folks now producing unconcealed hackwork that only “true connoisseurs” can appreciate?

But irrespective of this “modern art”, the modern and the ancient Venice does not get any worse or any better. It simply is Venice.

Check here for the rest of the Venice photos.