Not that I’m a mega-fan of modern kunst; it’s not as if I plan visits to progressive museums specially. But when I do happen by one in this or that metropolis of the continent I’m currently visiting, and it looks sufficiently mad-hatter – I’m in there like a shot. 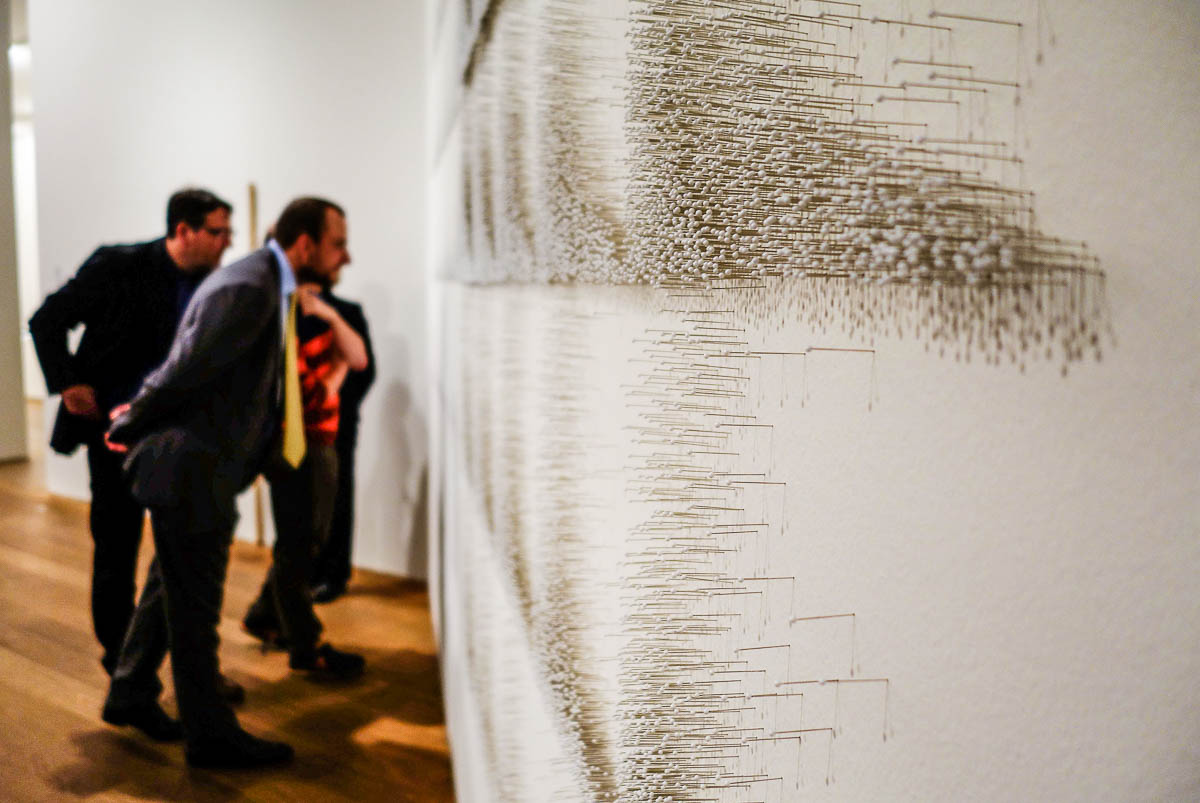 Some exhibits in Museum of modern art in #Luxembourg are truly mesmerzing. They make you stop and go back in time // Очень "мементо мори" экспонат в Музее современного искусства в #Люксембург #MUDAM

I’ve been to quite a few avant-garde exhibitions in my time, to some repeatedly, and I’m always equal parts impressed… and flummoxed! For I’m no discerning connoisseur. In fact, I sometimes wonder – is anyone? Maybe it’s all pretend – like I sometimes think it might be with, say, expensive wines and whiskies. I mean how on earth can anyone genuinely, truly appreciate a black smudge applied to a canvas with a human thigh covered in charcoal? Come on, you modern-kunsters – let me in on the secret!

So yeah, IMHO, 90% of modern art is pure potty – no doubt in more ways than one – and verging on the schizophrenic. However, the other 10% – I just love it! Some of it is genuinely pleasing to the eye and soothing to the soul. It just resonates with something deep inside – the subconscious maybe. 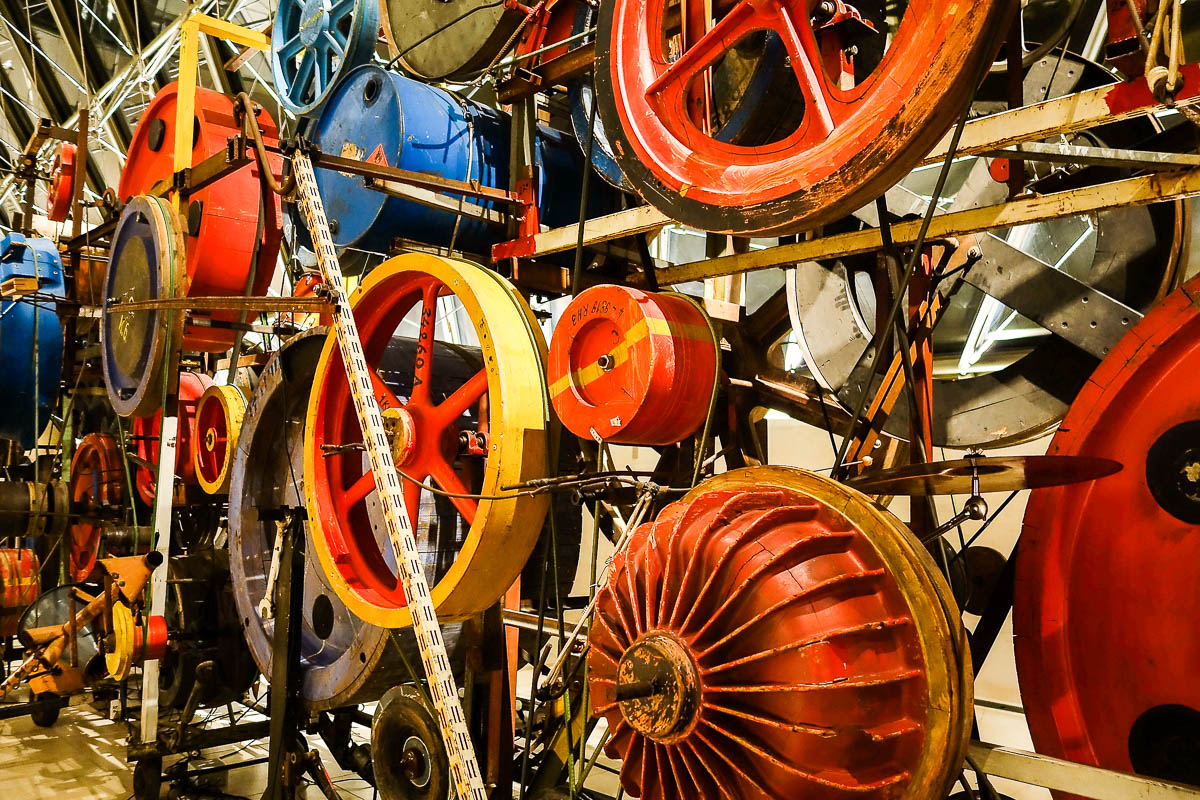 To me, a trip to a modern art museum is like… a fishing expedition! Let me explain…

When fishing for a few days, sometimes you catch plenty of big fish. Other times – you get just a few minnows. It’s just how it is. But sometimes you catch a massive whopper. Just like with modern art galleries. Sometimes those whoppers have almost magnetic force. You look, you photo, you look again from a different angle, you step back, and then you get drawn back in closer – magnetically! 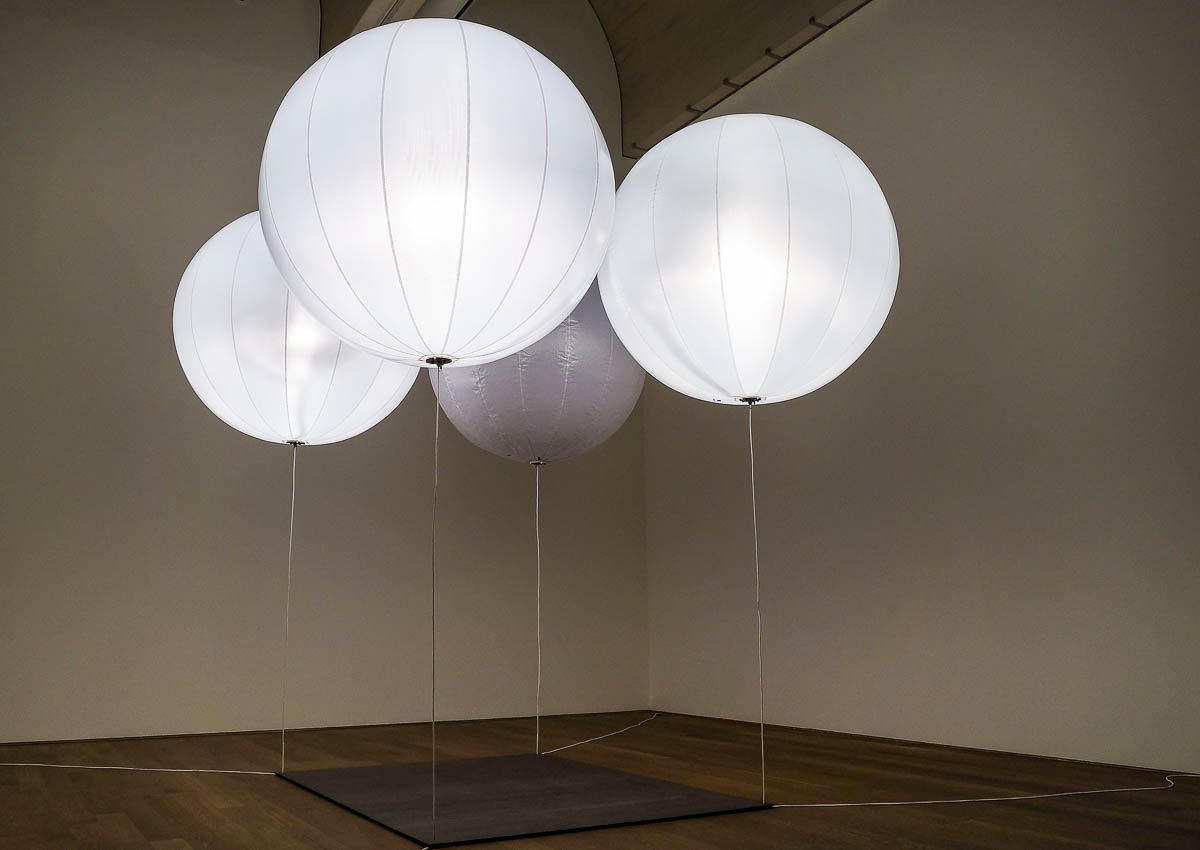 Anyway, I think you get the message; sorry for being so long-winded (killing time here stuck in Frankfurt airport waiting for my connection :).

Mother Earth is the outcome of biological evolution, as theorized by Darwin. What lives today had to be the very fittest to survive down the ages. The weaker majority wasn’t so lucky. It’s the same with art. The great majority of artistic works are just abominations, with perhaps only the ‘artist’ him/herself seeing beauty in his/her creations, while everyone else just doesn’t get it. Shame. Kinda. For as we say in Russia, ‘you can’t argue about taste’. So it’s only natural that the craziest ‘art’ gets left by the wayside, while only the pieces that are popular survive. Sure, some great art (and music and literature…) gets forgotten scandalously unfairly, and all because fate wasn’t on its side to get it promoted well! Oh, the inhumanity. But that’s life – and art. 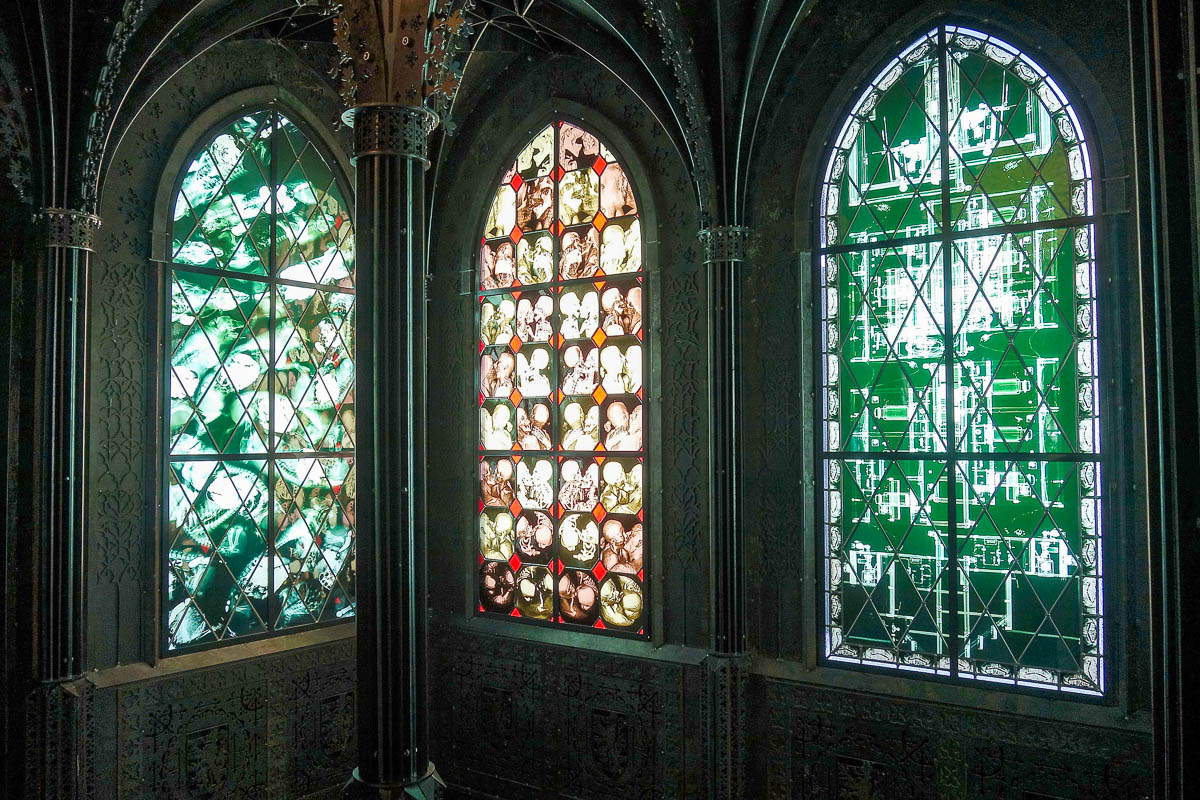 There I go again. Long winded as ever. So what am I getting to?

Well, last week I was in the Grand Duchy of Luxembourg and, instead of chancing past a museum of modern art as usual, we had a planned visit to one. It was the Grand Duke Jean Museum of Modern Art, aka MUDAM (Musée d’art moderne Grand-Duc Jean), where we not only had an excursion, but also had our Christmas dinner with key European clients and partners! In the museum.

The museum is relatively small, but packed full of awesome kunst. Highly recommended. Unusually for me, we were assigned guides for our excursion – i.e., the human kind, not the booklet kind. I normally prefer to stroll about a museum unrestrained, but this time I don’t regret having our guide. It was most informative, notwithstanding a minor dispute!…

At first our guides tried to convince us that the world is round. Indeed, this is a rather widespread misconception today, for actually the world is flat. Our guide, let’s call her Marlene, was most demonstrative in trying to convince us otherwise – showing us a lot, talking a lot, parading to us a Foucault pendulum, and more.

But no matter how much she talked and explained and demonstrated, let’s face it, there’s no getting away from the fact that she was talking nonsense.

However, I’ve been near the equator many times, for example, in Singapore, and I can assure you that nothing there – like, the whole city-state – is spinning anywhere at the speed of sound. So, please. Enough of these zany theories already!

You had to feel sorry for Marlene really. Still, I do hope we have set her on the path of scientific enlightenment and she will one day thank us – or maybe get to Singapore herself to see how still everything is there.

Marlene seemed quite disturbed by all this new information challenging her firm beliefs. To soothe her a bit I told her not to worry, as erroneous theories are two a penny – and gave her an example: the Hollow Earth theory.

According to it, all the laws of physics we know (the speed of light, gravitation, magnetic fields, tides…) are inverted. Even the earth itself is inverted – a ball turned inside out – and we’re living on the internal surface of that ball. The weather, the stars – all that: it’s all going on inside a ball. Our forays out into ‘outer’ space are actually journeys into ‘inner’ space. And the speed of light (and all the rest) falls proportionally as you move toward the ‘center of the world’. Oh yes.

Despite all I said, Marlene still refused to give up her belief in the round-world theory. So I tried to catch her out with a spot of Socratic method. My first question: if the Earth is round, there should be no difference between (i) nighttime during the season when nighttime is as light as daytime, and (ii) daytime proper. Right? Logical? But it ain’t so! What’s the difference? Marlene couldn’t answer. But there is a difference. More about that below.

No. About that next time. For now just think: When the sun’s constantly up in the sky above a pole at night – how does that ‘light night’ differ from day? (There is a difference – I’ve seen it.) Try to guess!

Meanwhile, back in MUDAM, we walked over to another hall…

One of the main principles of industrial safety goes like this: ‘Never, ever press the Big Red Button’. But here was one such red button, on the floor by this here bizarre contraption. Naturally, we pressed it!…

… and the mechanism sprang into action. All those cogs squeaking and scraping and rattling, levers moving to and fro, all of it producing a gut-wrenching cacophony. Oh my ghastly. ‘Complicated and useless – like a human life’, I thought for some reason.

Other, more useful, exhibits included this here miniature canon, which kicks into action when sunlight goes through that there lens – at noon precisely. Useless? No! You can set your watch by it every day at noon. Most handy.

And even more helpful…:

Here’s Marlene, btw, together with a robot that in the not too distant future will become an excursion guide. 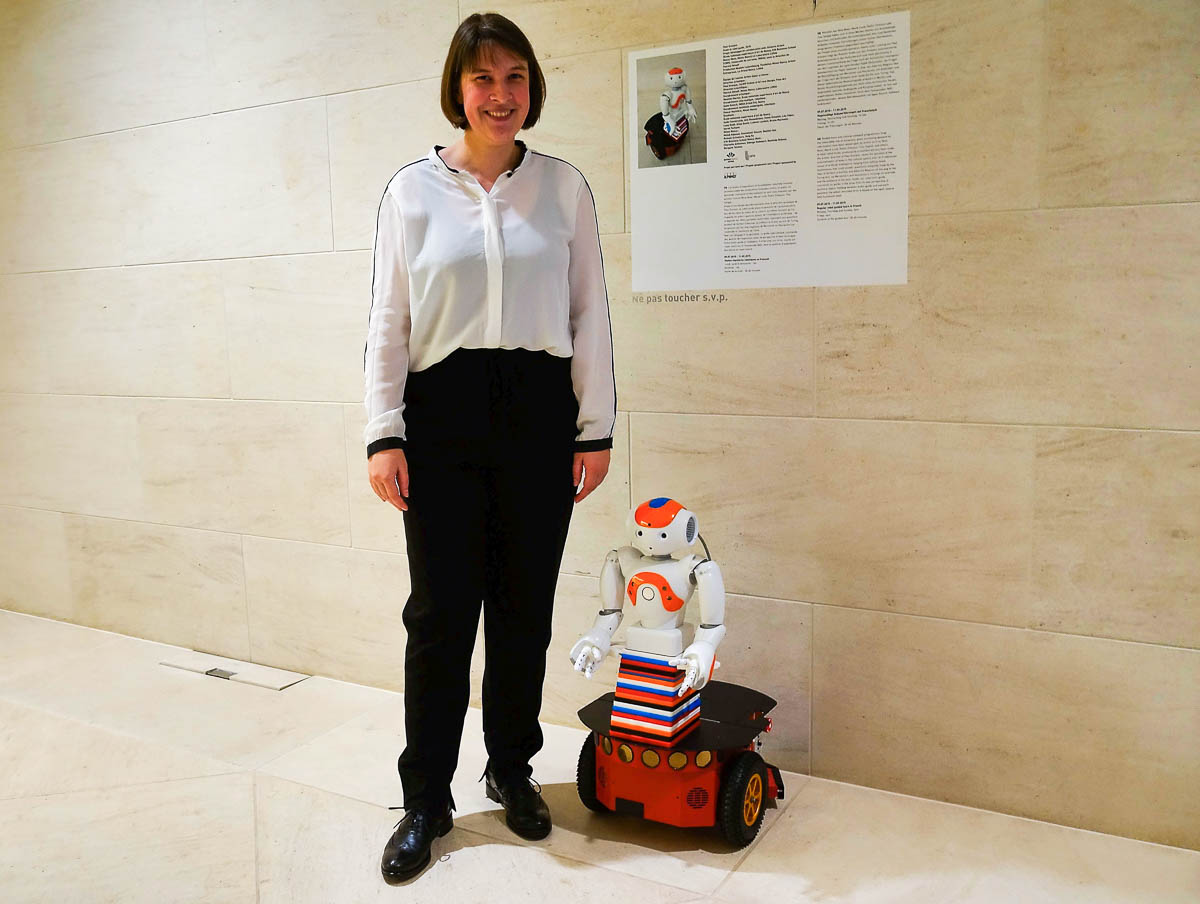 It will get cleverer and cleverer, will start to memorize questions and combine answers from a database applying complex logic (all of which the personnel here will proudly and incorrectly call ‘artificial intelligence’). And then the tourists will be replaced by robots. And the great great great grandchildren of these white robots will entertain and impress the tourist-robots who like modern art – robot art.

Incidentally, we’re sponsors of this museum! Maybe that’s why they laid on Marlene :)? 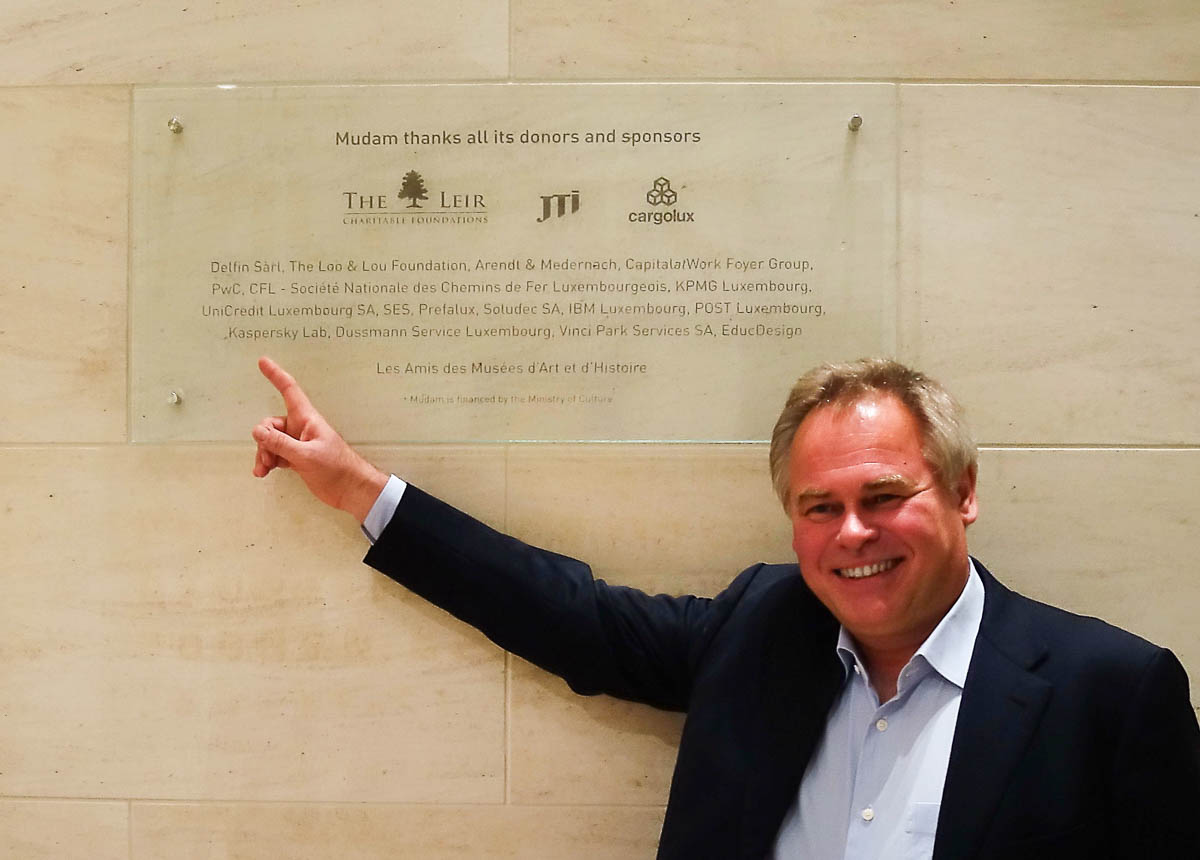 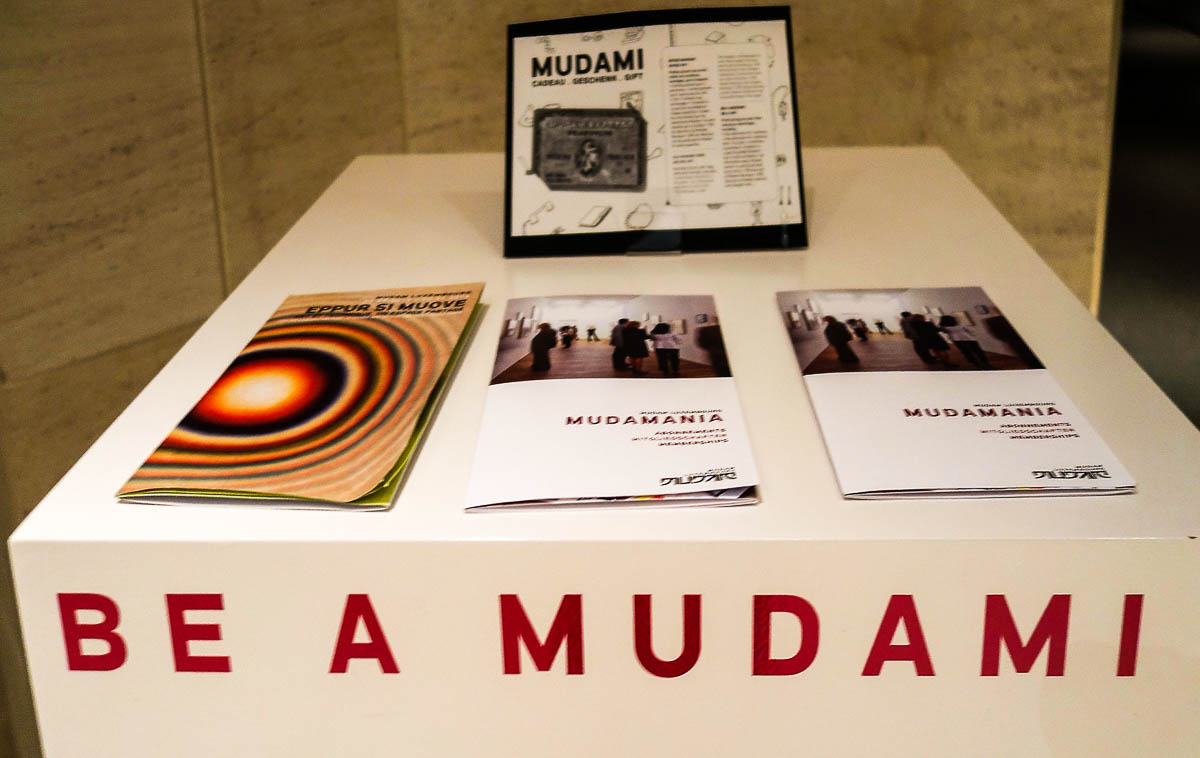 After our excursion it was time for our festive feast. Turned out the table and chairs were also museum artifacts, so we were politely asked to be very careful with them, and, given our track record, most certainly not to paint them! 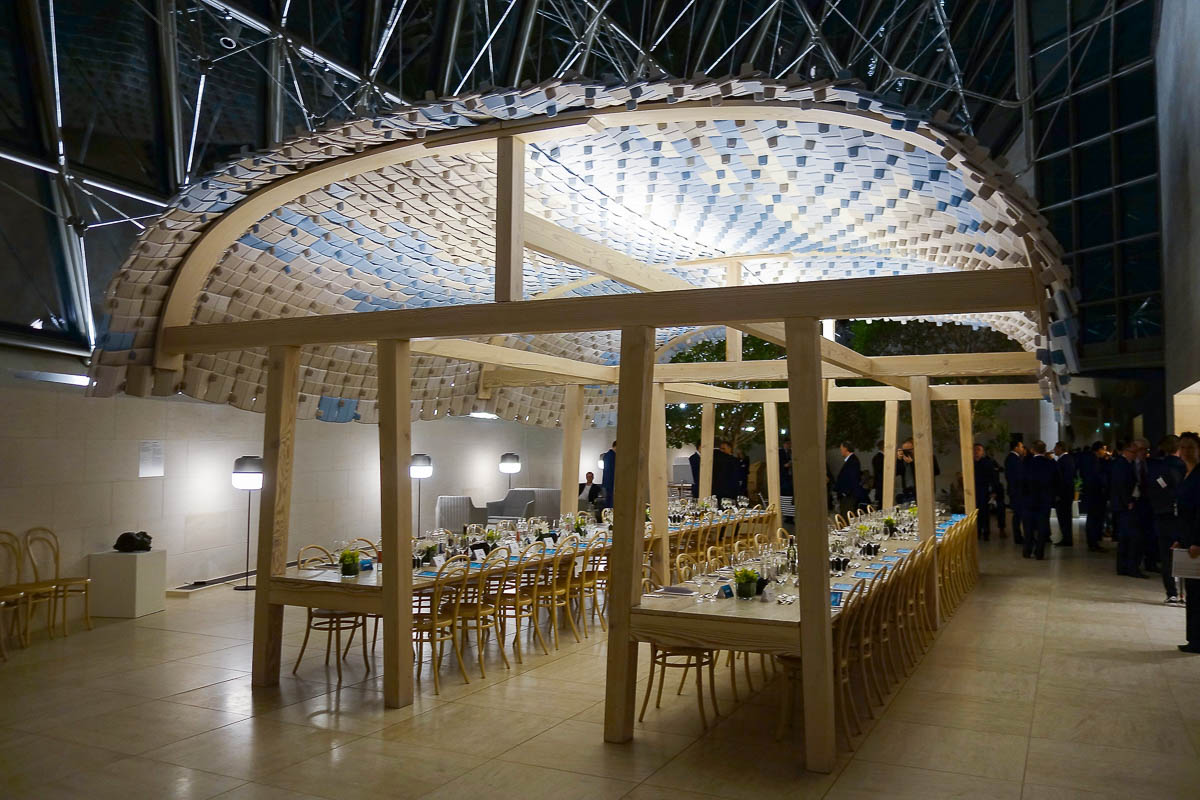 Christmas dinner with our clients and friends in the museum of modern art in Luxembourg. The table itself is a piece of art – this installation is a part of the exhibition! // рождественский ужин для друзей и клиентов в музее современного искусства в Люксембурге. Стол – часть инсталляции из текущей музейной экспозиции!

The rest of the photos from MUDAM are here.

PS My question once again: how does day differ from night at the poles (or near them) when it’s the time of year when it’s light all night as well as day? It’s actually quite simple. But can you solve it?