Next up on our Kamchatkan adventure – rather: next down – we chopper out of the city and fly south!…

After half-an-hour, or around 100km, we make it to our next must-stop-and-investigate. We could have stopped off along the way for some hors d’oeuvres, but the weather was just a bit too cloudy for comfort, so we settled for hors d’oeuvres-tasting from the comfort of our helicopter instead: 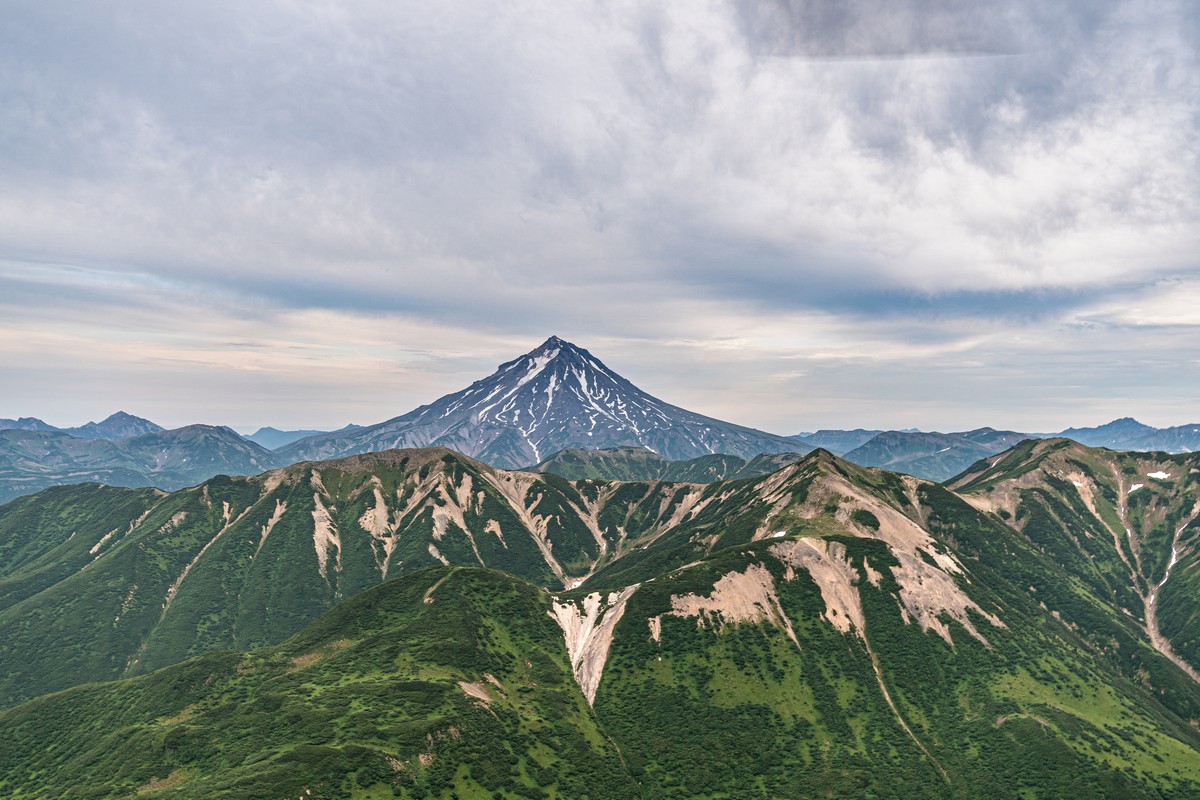 That symmetrical beauty is Vilyuchik, which you can see from the city (as long as it’s not hiding as a mirage). Oh Vilyuchik – why are you so photogenic?! 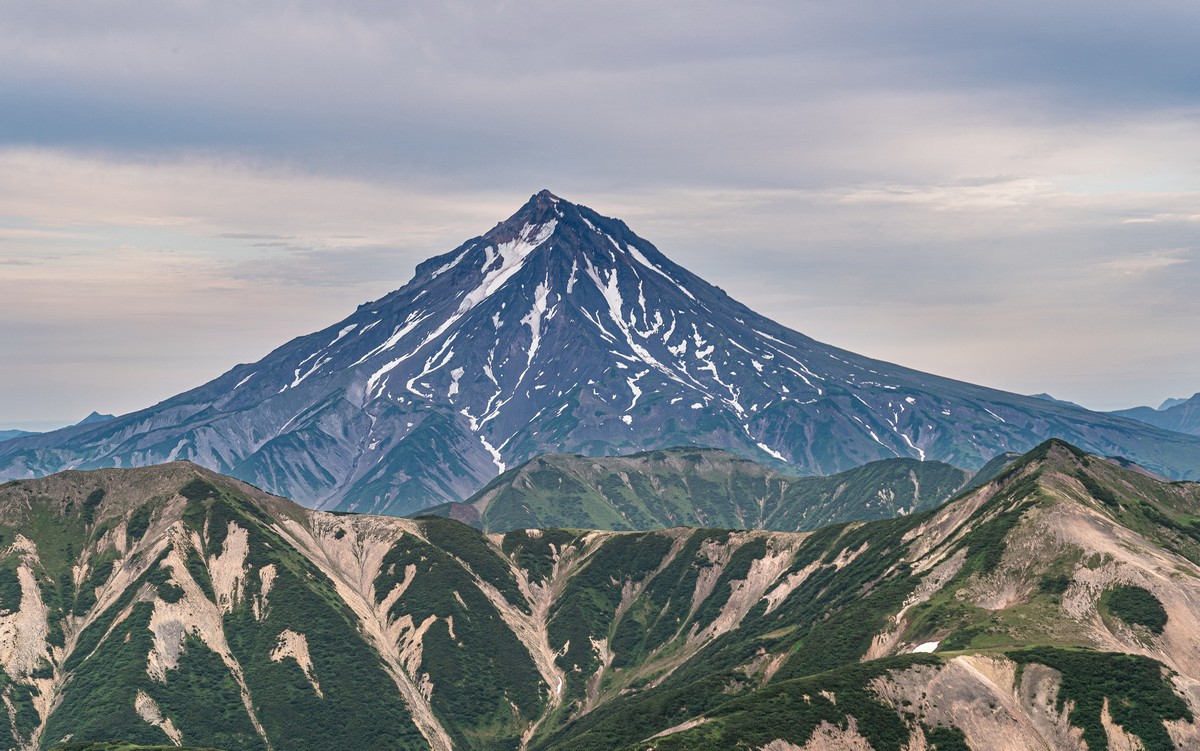 The volcanic landscapes here look like this… and this is around 1000 meters above sea-level, near the 52nd parallel – on the same latitude as Berlin – and this is July 2021. Don’t remember seeing snow in Berlin in summer, do you? ) 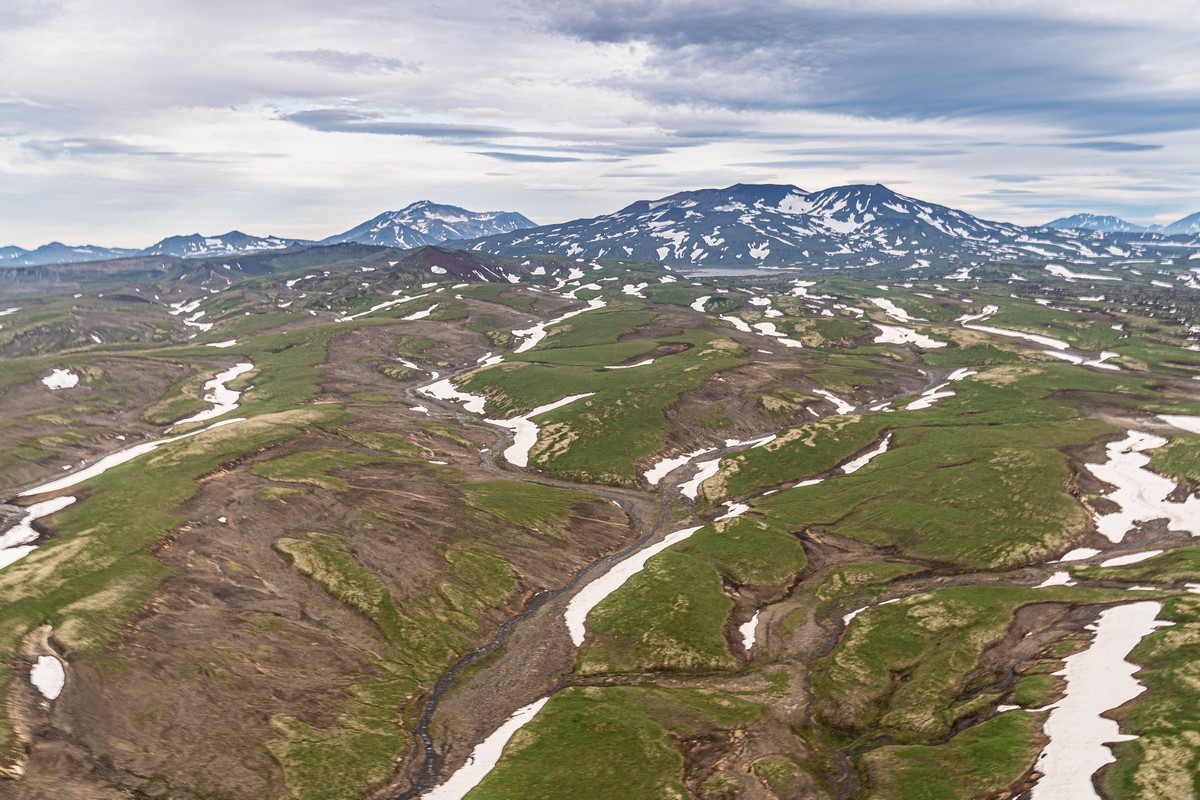 Chilly, severe scenes, but beautiful ones ).

Gorely volcano (the one that featured multicolored lakes in its upper craters, but now just one remains) -> 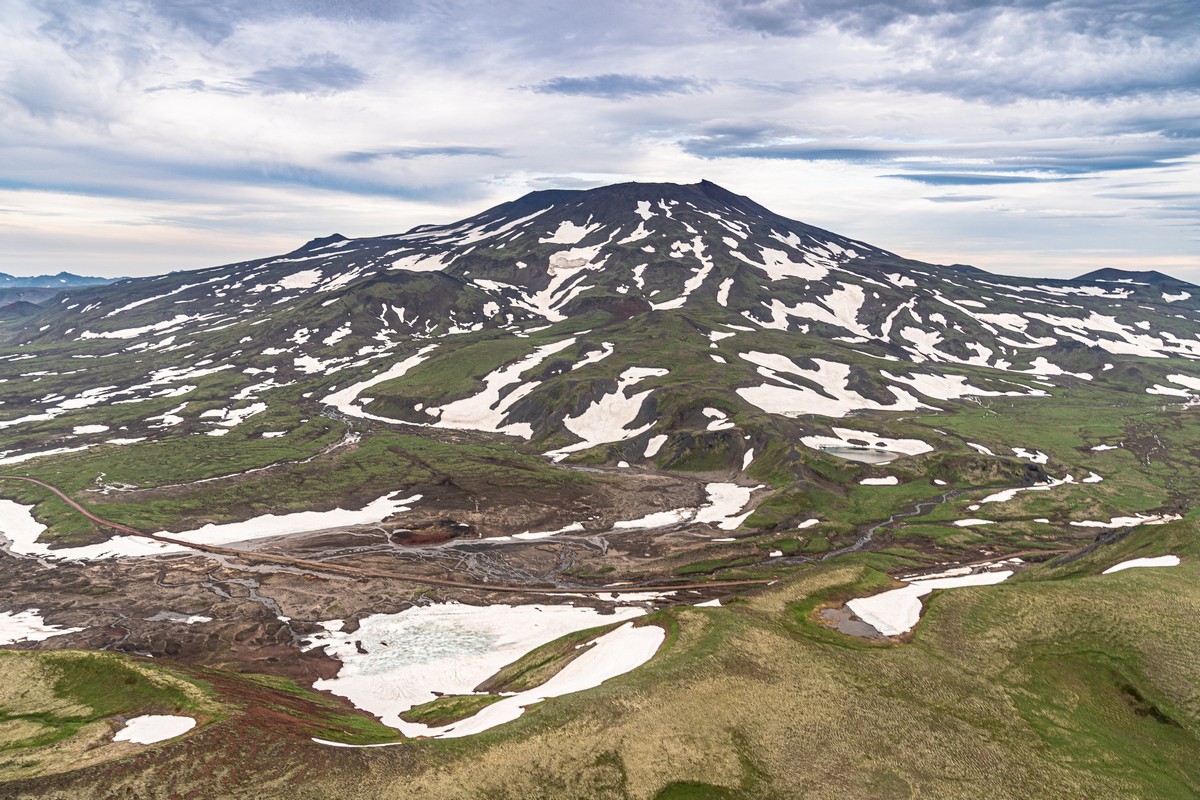 Mutnovsky with its smoking fumaroles: 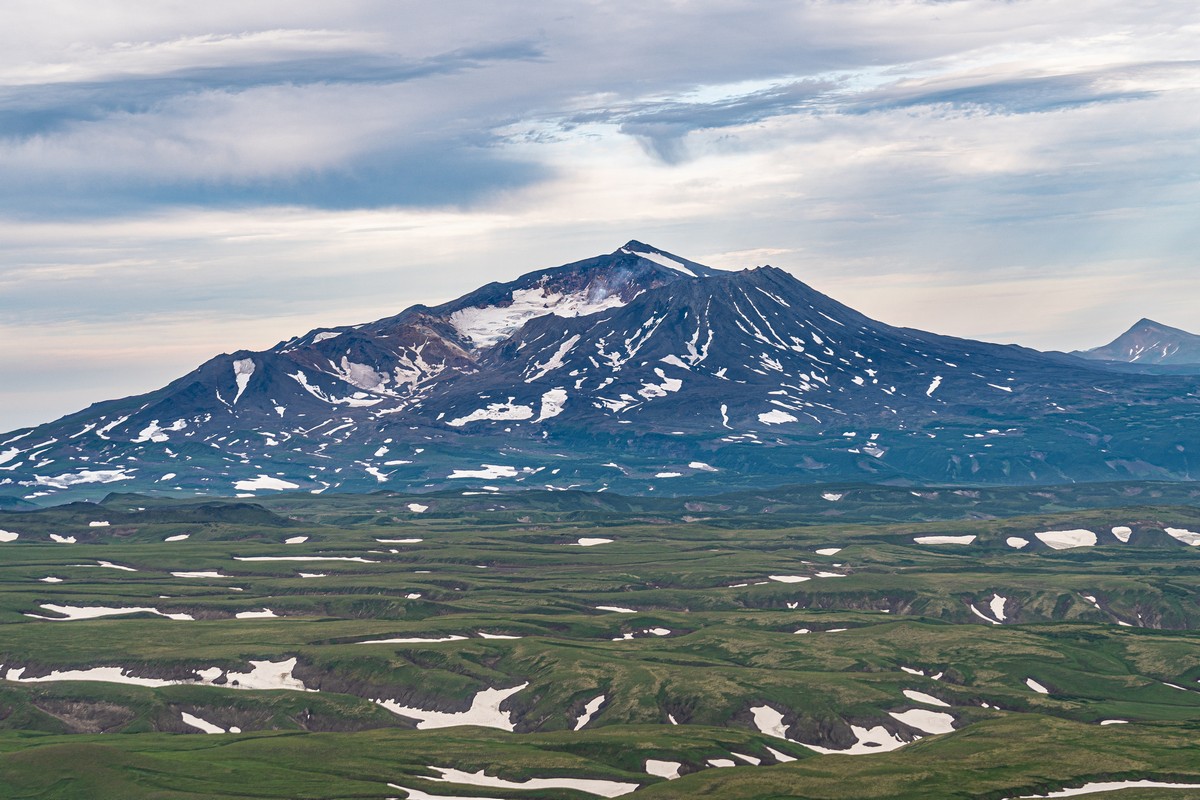 If you’re feeling especially adventurous, you can take an all-terrain vehicle along that road down there (or you could walk it in two days) and get to the Verkhne-Opalsky hot springs: 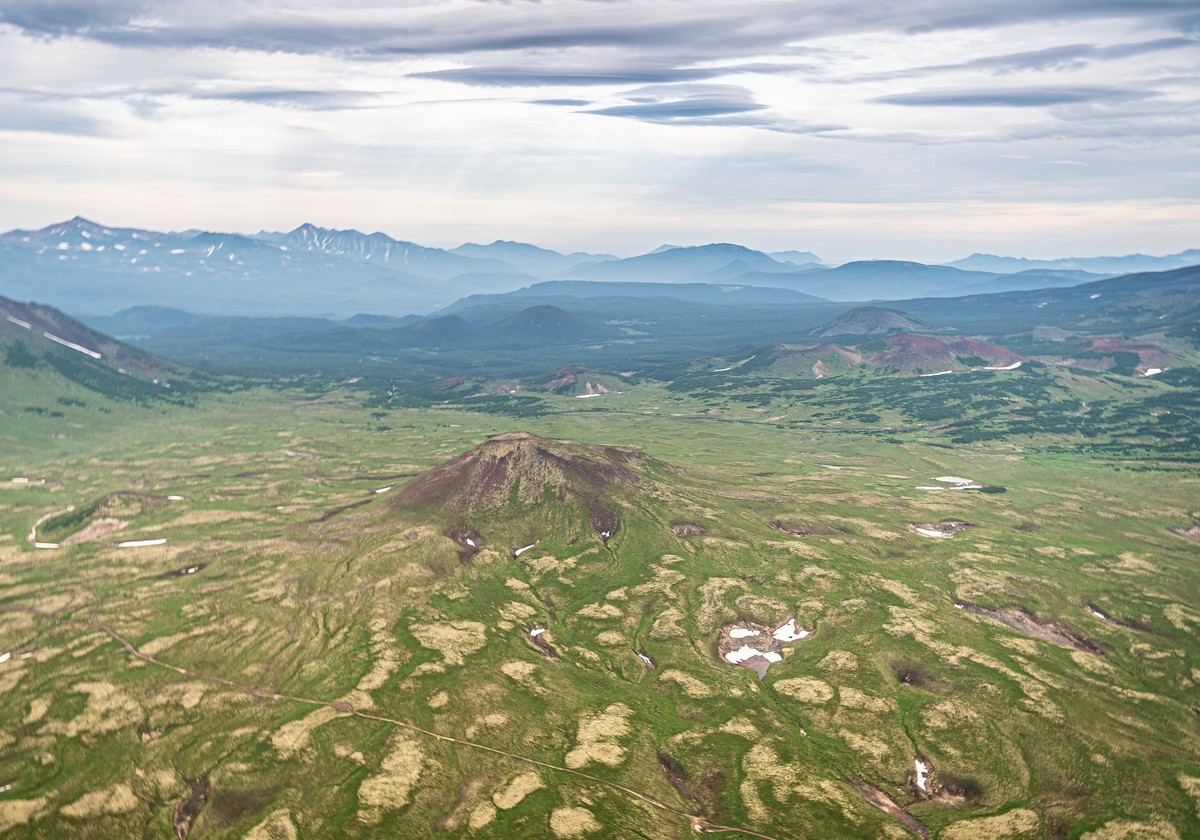 And if you’re feeling mega-adventurous/curious, from Verkhne-Opalsky hot springs you can walk to Khodutka volcano in two days (quick marching) or in three (easy pace). The distances aren’t too great, but the brushwood cover is real dense and hard-going; accordingly, you need to follow the well-worn… bear paths! When in the Kamchatkan wilds, get used to Kamchatkan wild realities ).

En route (in good weather) you get wonderful views of Asacha volcano, but we have viewed Asacha a grand total of… zero times: the weather has always been too bad! This is what, one day, we dream of seeing! -> 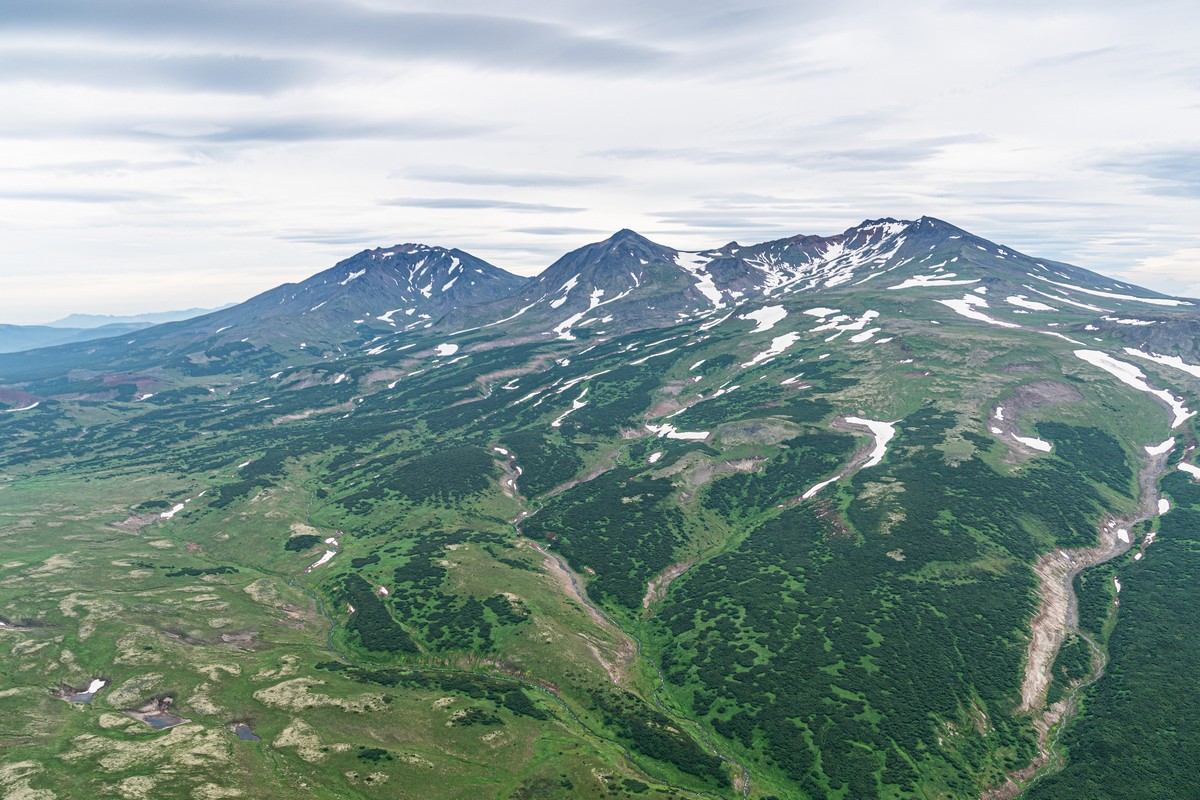 And here are Khodutka with Priemysh (pronounced pree-yom-ish). Priemysh is the older, inactive volcano Khodutka formed out of a zillion years ago, which today is slowly crumbling up; whereas Khodutka is in the prime of strato-volcanic life – with terrific thermal springs to prove it! 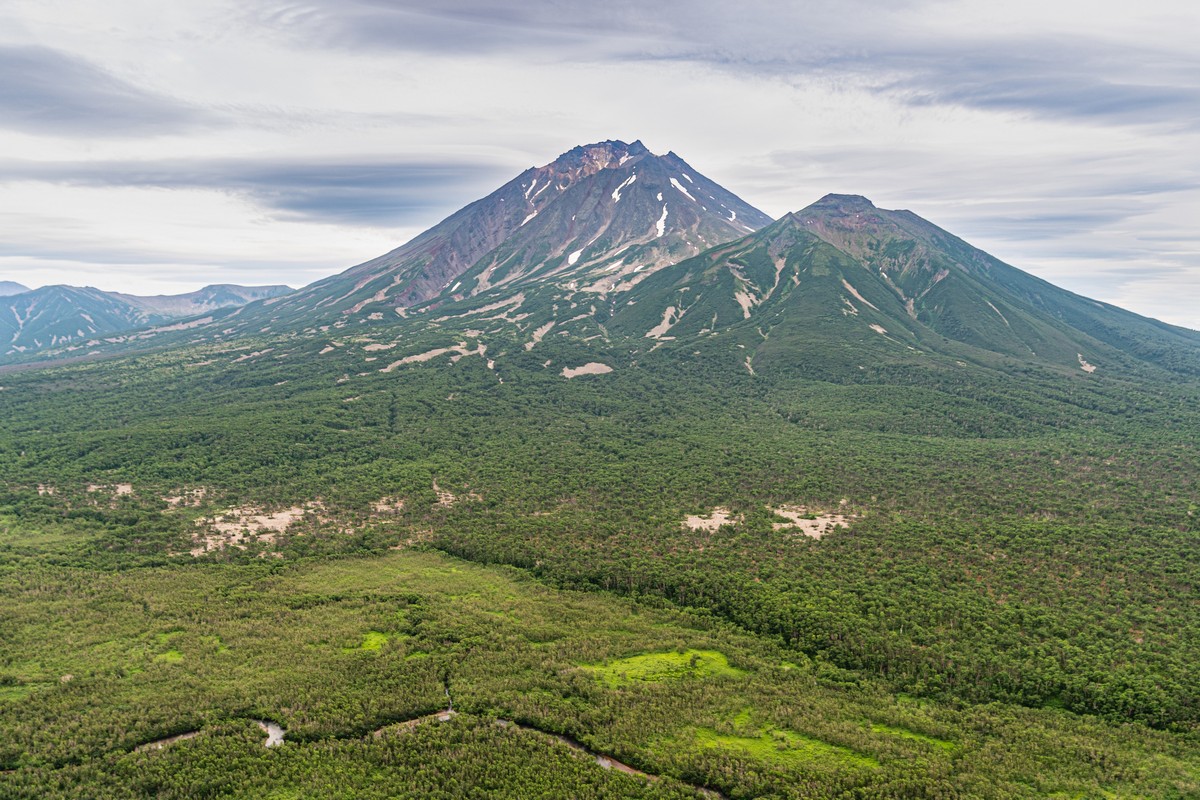 I’ve been meaning to climb Khodutka for more than 10 years already, but the weather has always been too poor. I’d settle for being dropped near the top from the helicopter (cheating?!) even, or just an aerial flight in the chopper without the drop, but, so far – so bad has been the darn weather even such volcanism-lite undertakings have been impossible (. 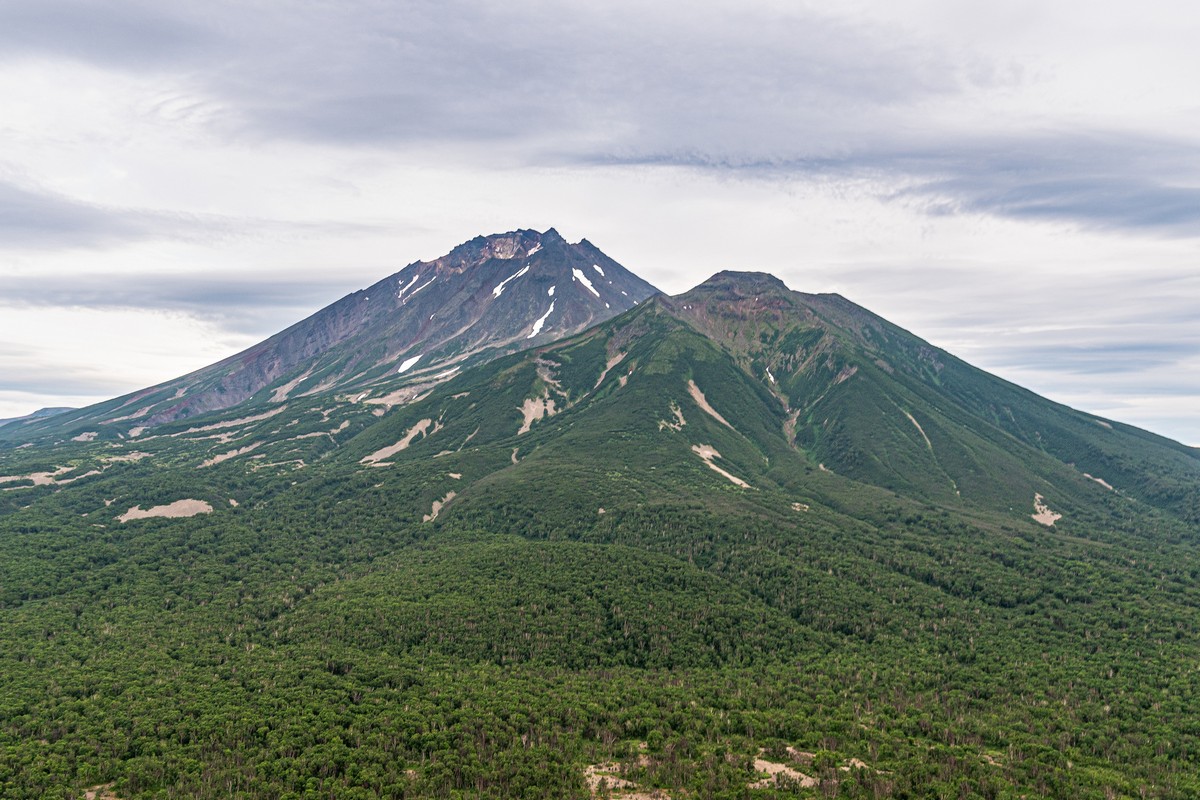 I’ve written plenty about the awesomeness of Khodutka before, so I won’t repeat it all. Here I’ll simply restate how, generally, Khodutka is among the very few, very best, of Kamchatka’s volcanisms. While specifically, its natural hot springs – these are… the very best in the world! And I can prove it; actually – I did. Example: check out this hot lake! -> 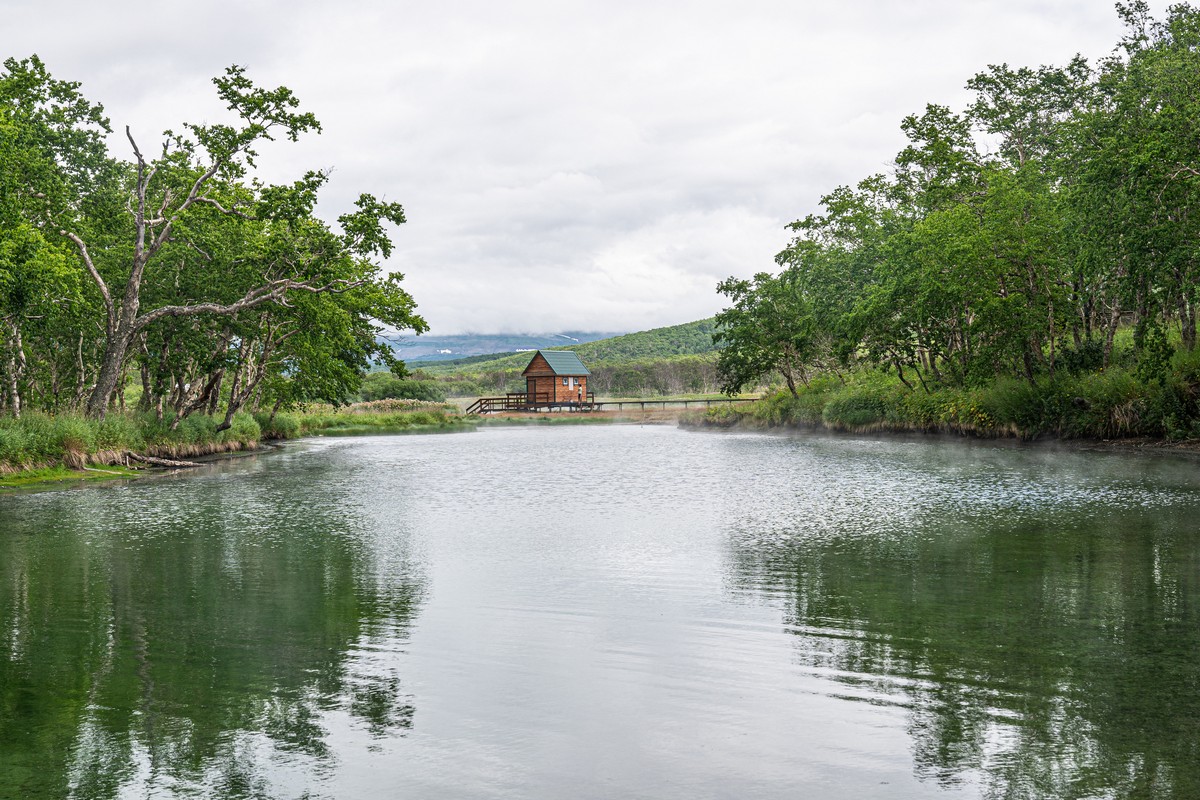 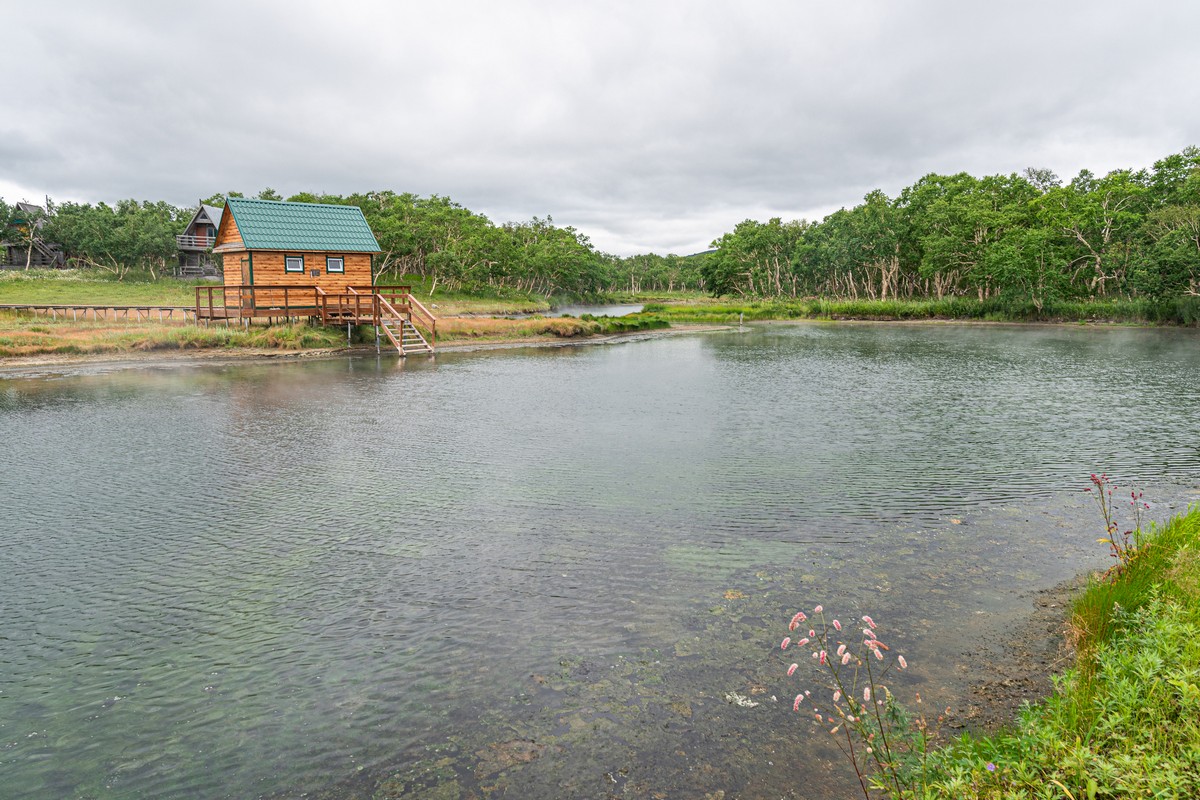 How Mother Nature quite managed this feat, I really don’t know. A natural swimming pool with the perfect water temperature? Wait – there’s more to this perfection: the warm water is… drinkable! It hasn’t been ‘infected’ by volcanic emissions into it as often happens on the peninsula. Hurray! Even Homo sapiens come nowhere near such perfection: imagine wanting to drink the water… in a swimming pool? )

Over in this section of the lake – the springs steam: of course they do, as their temperature is around 80°C! -> 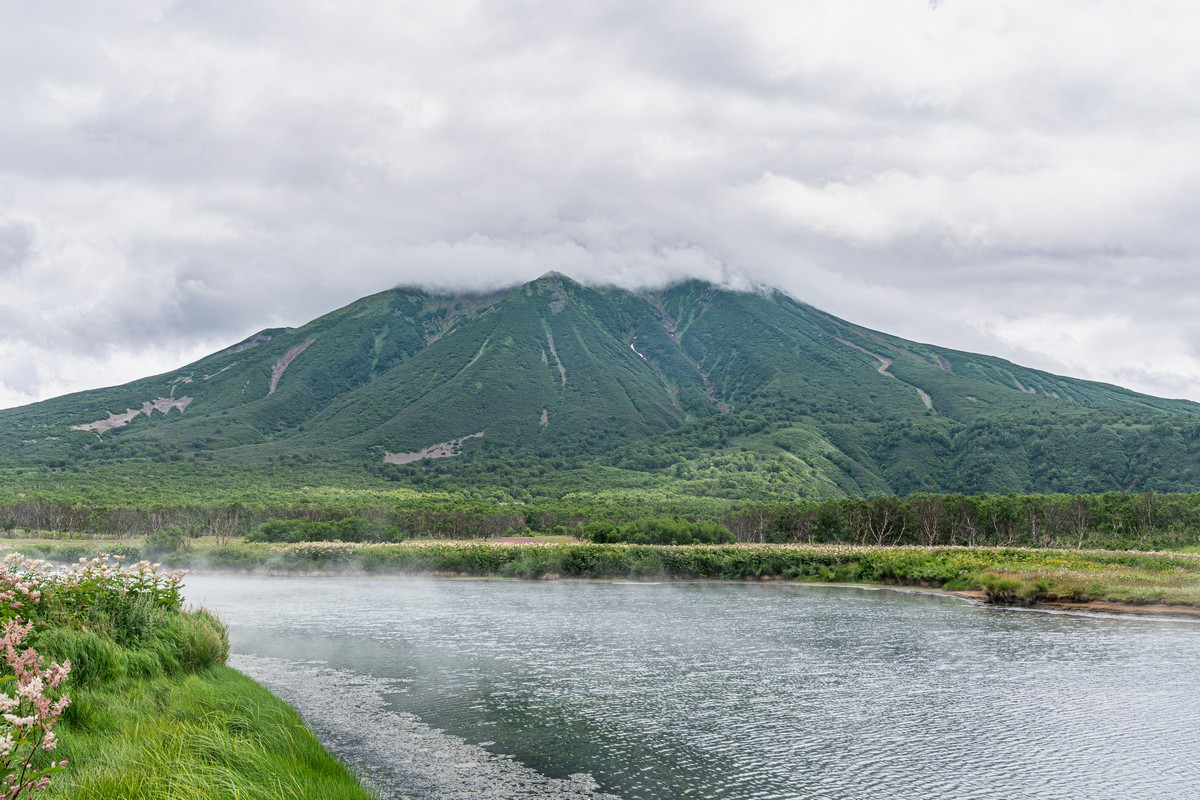 …But as it flows toward the stream that comes off the lake, it gradually cools to become comfortable…

I’ve been here before: in 2010, 2012, and in 2015 (this latter link is where I compare the world’s best hot springs, and ultimately award Khodutka with the title ‘best hot springs in the world’:). 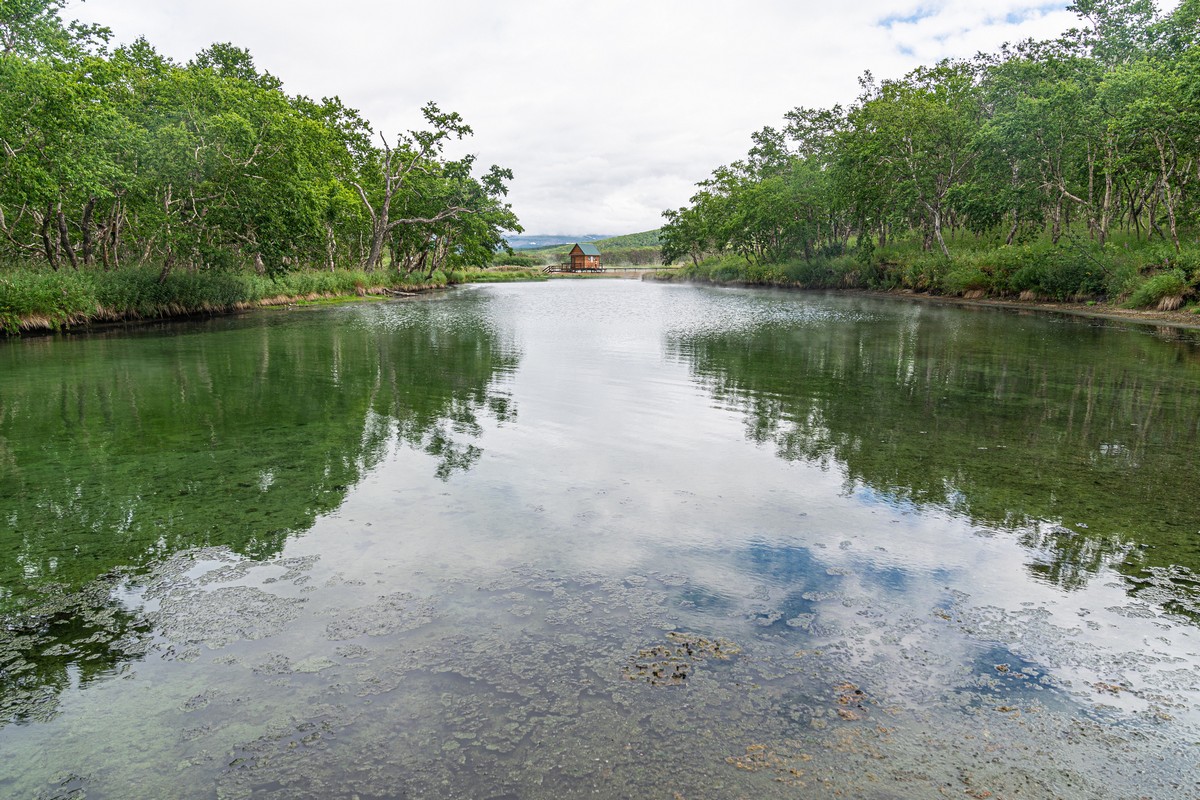 Briefly, any springs with water below 40 degrees centigrade cannot be contenders – they’re merely ‘warm’ springs. Higher than +47°C, that’s too hot to bathe in, so also ruled out. The most ideal temperature is +42°C, as we found out once in the Kuril Islands. But when you deduct all the inapplicable, and add up some numbers regarding amazing scenery + amazing safe bathing at the perfect temperature, the winner = Kamchatka! 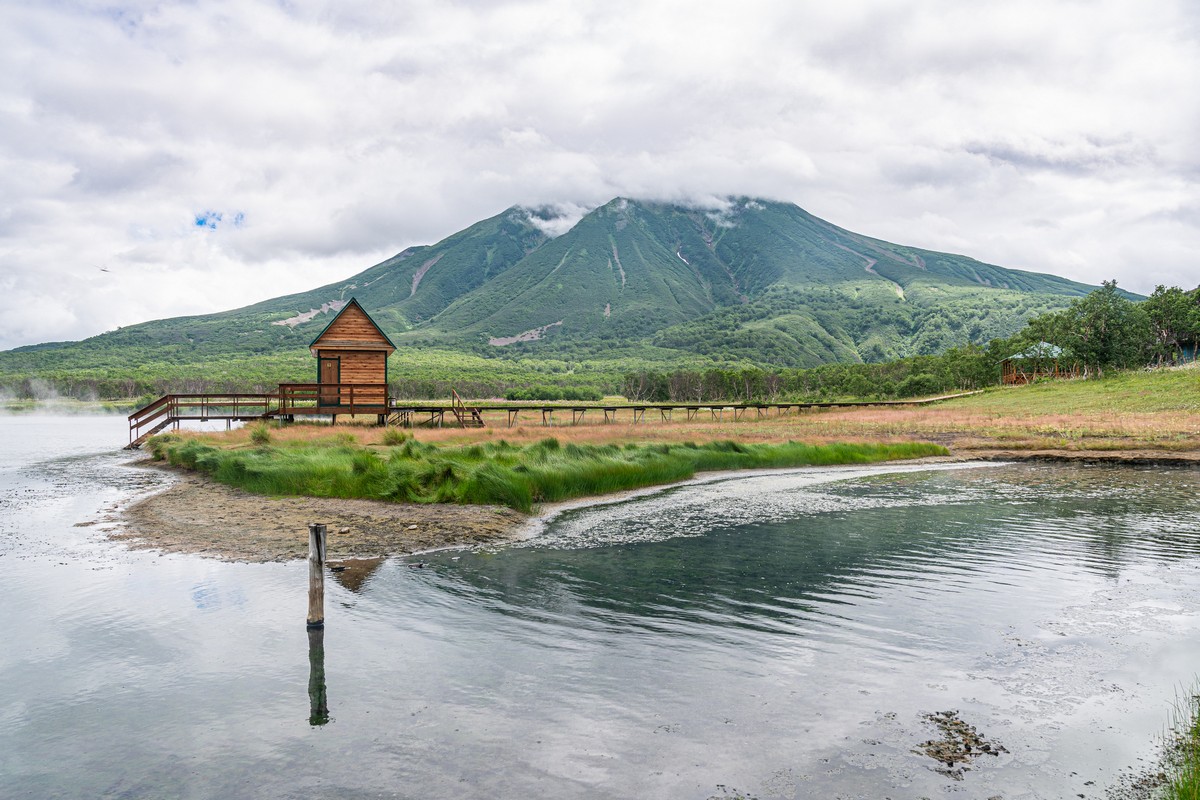 You can set up camp here and use it as a base to go for walks from. That is… if the weather’s ok. For it seems that whenever I show up, a ghastly, godless cyclone takes hold along with a biting wind and intermittent rain. The only thing left to do is sleep! ->

There’s someone sleeping in that cabin too: 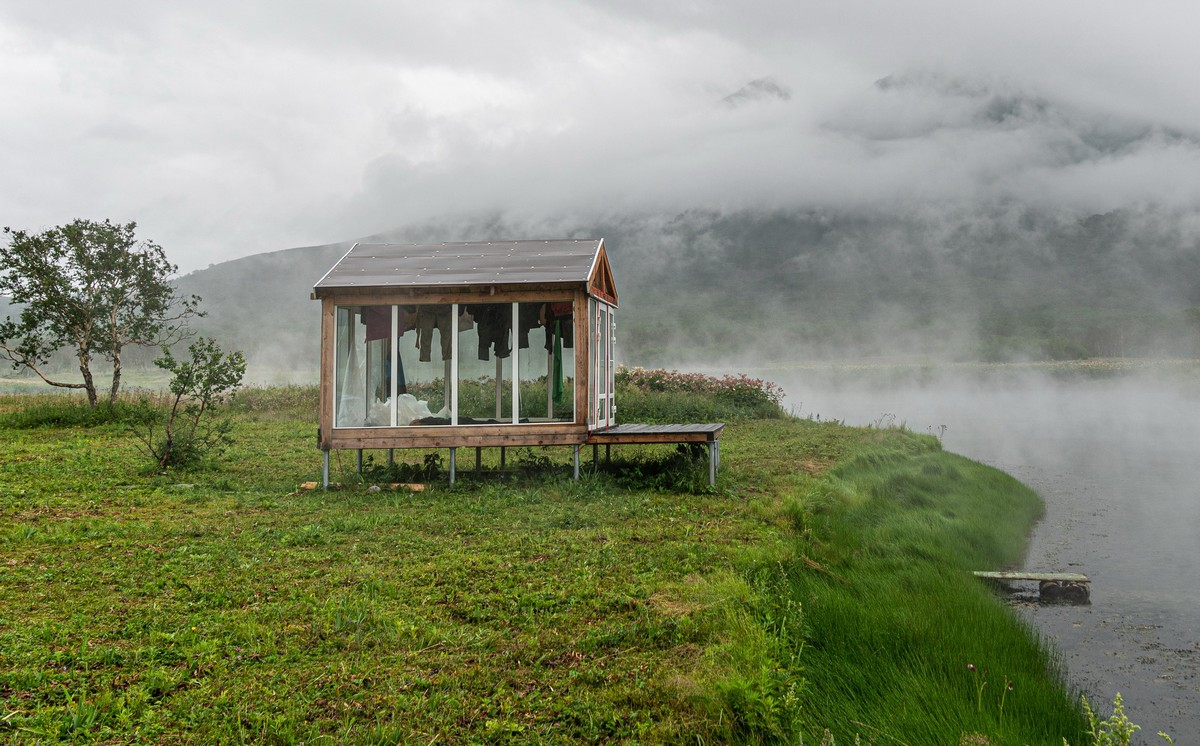 Occasionally – out comes the sun, the fog lifts, the mood lifts, and for a moment you think a pina colada at the beach bar might be in order, before remembering you’re in Kamchatka, where there are no pina coladas, there’s no bar, and the ocean’s a good 40km away! I never liked beach holidays anyway ).

Not sure why everyone’s walking around and taking photos, and no one’s bathing in the perfect-temperature water… 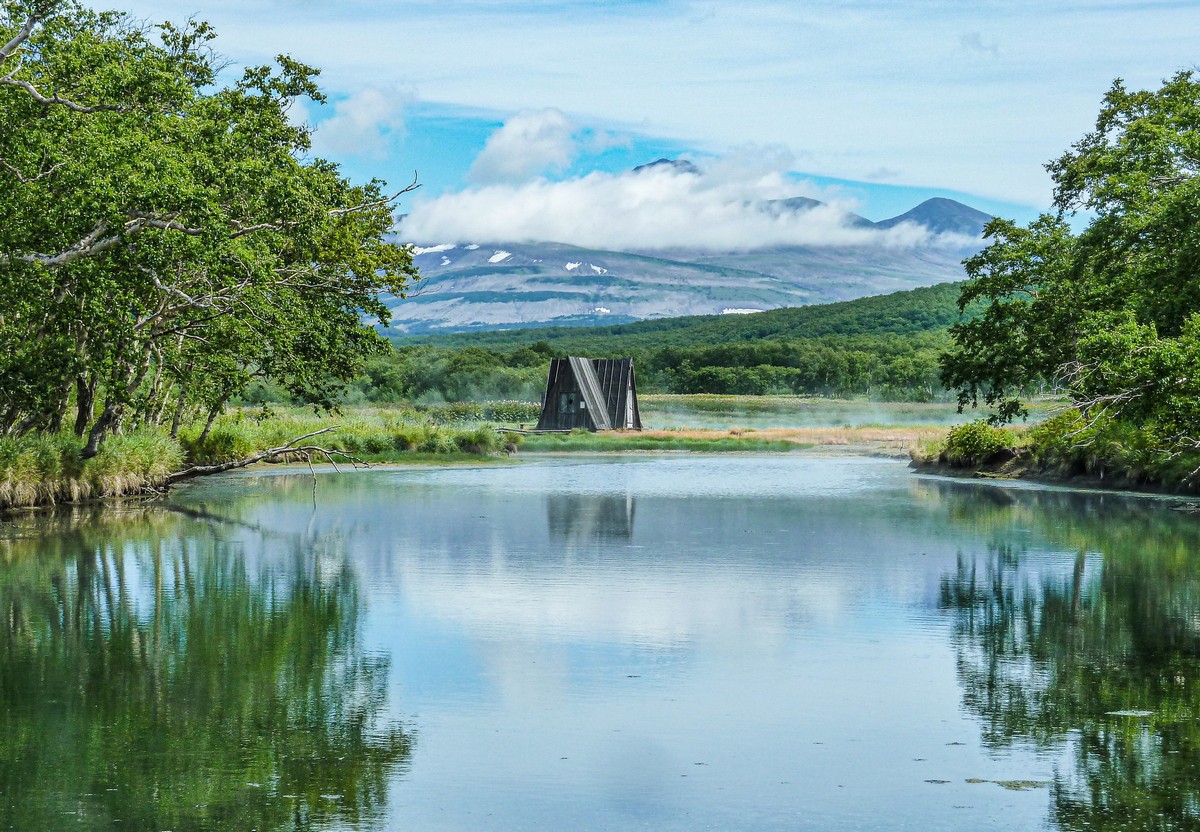 Actually, I do know: everyone’s had their fill of bathing. It’s like chocolate: at first – yum, but after a kilo of it?…)

Have you noticed the cabin (for getting changed into your bathing costume) is changing from photo to photo? 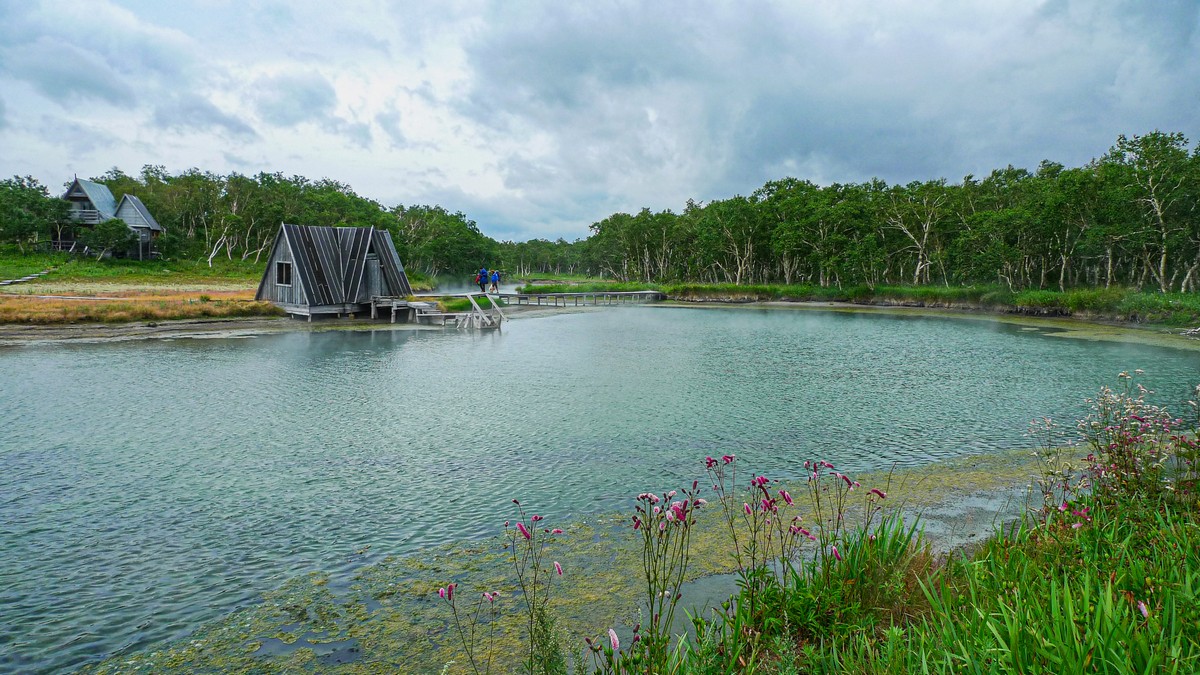 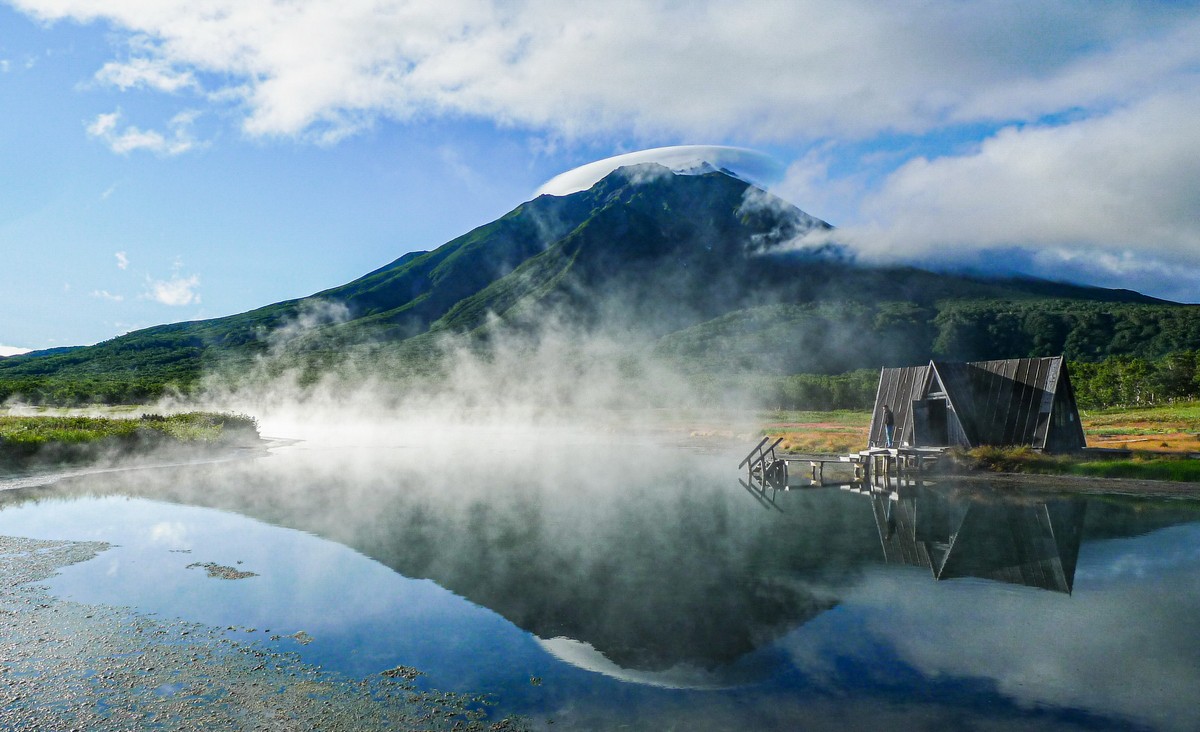 In the year 2015, though we didn’t have rum, coconut milk or pineapple juice, we made up for that with our own… home-made palm trees! -> 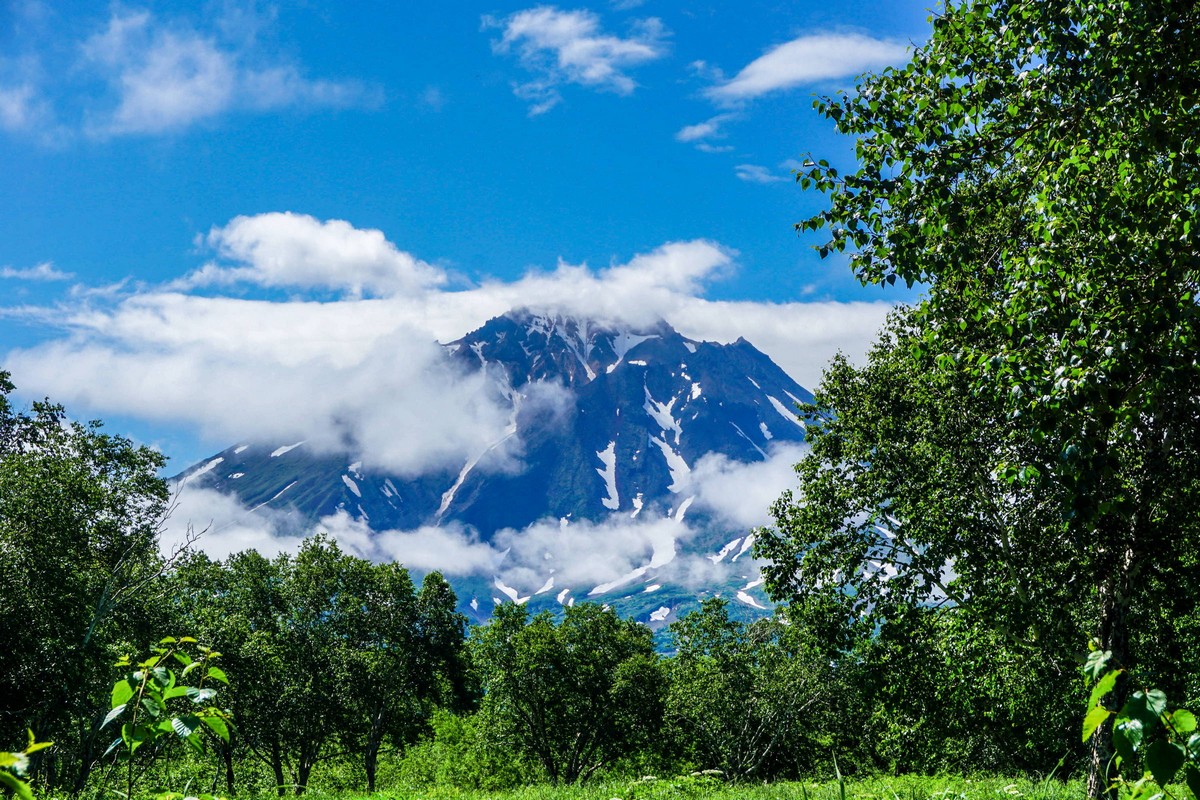 No filters here; this is the actual color of the grass: almost luminous! -> 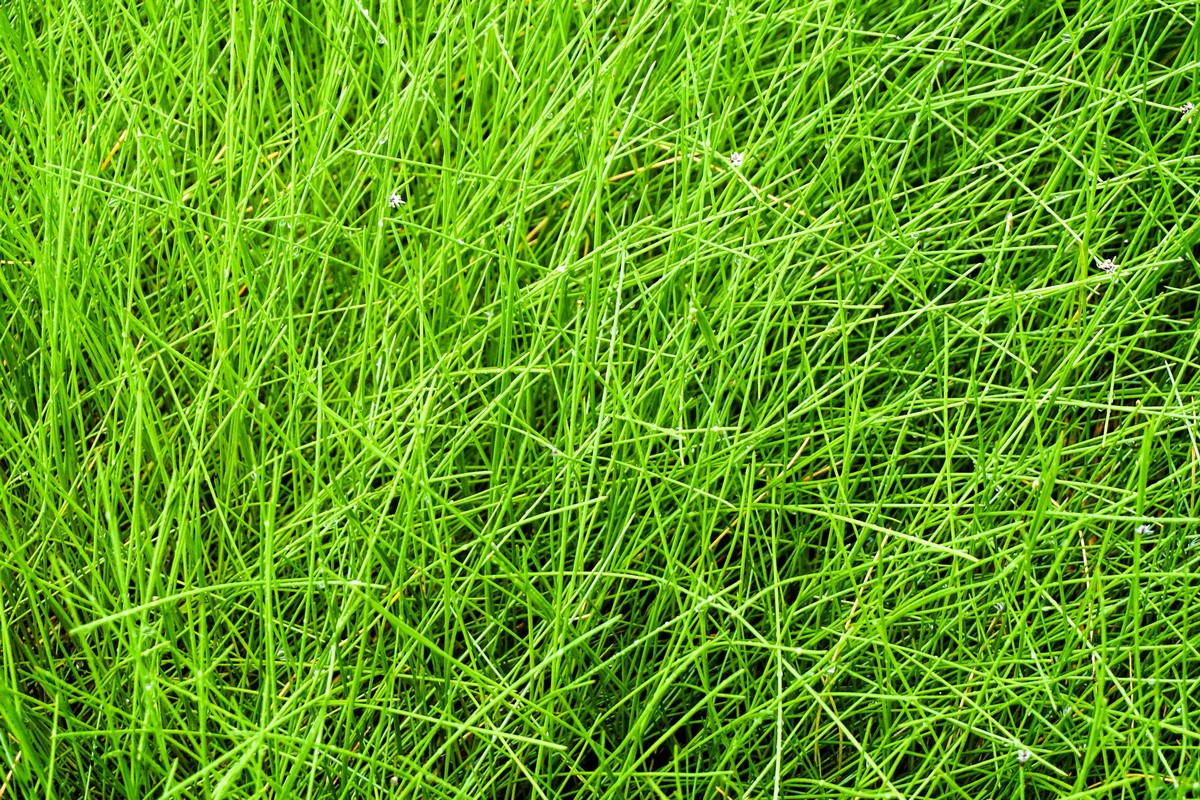 Things were getting rather shabby, but by the summer of 2021 almost everything had been repaired, (apart from the bridge over the lake). 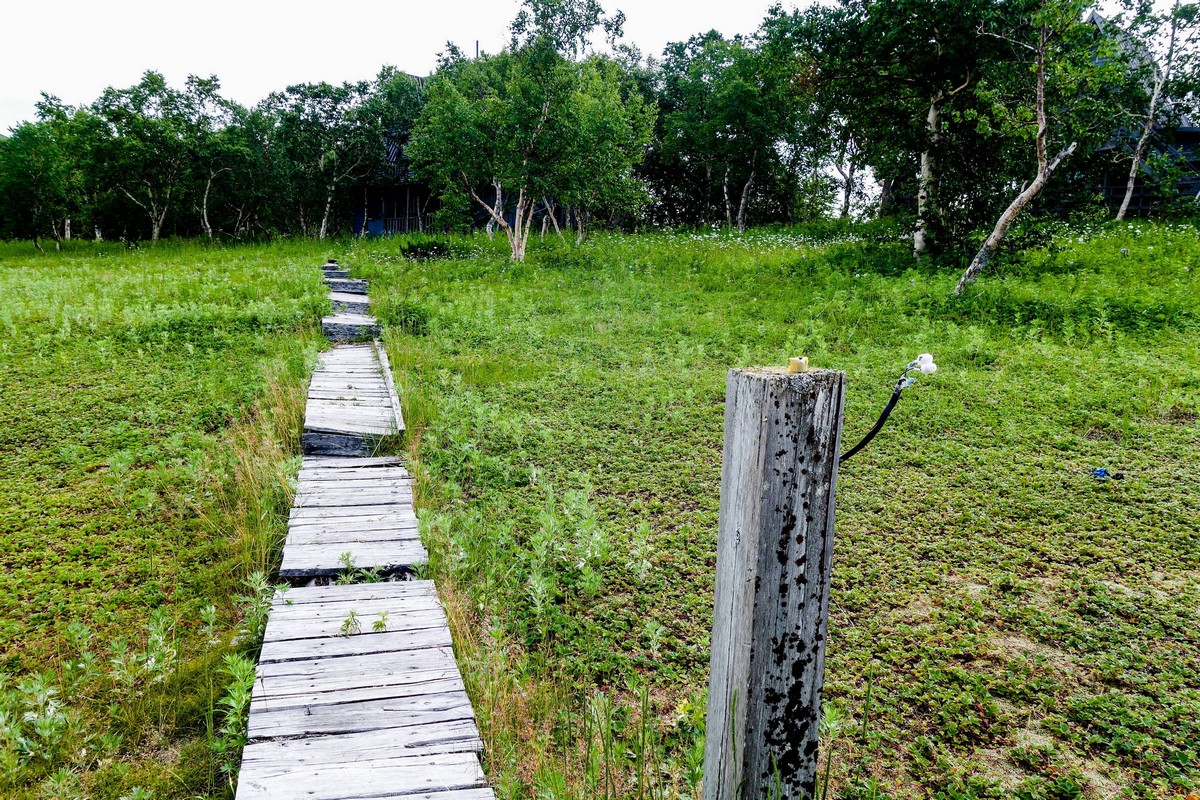 Here’s the old bridge – not there anymore: 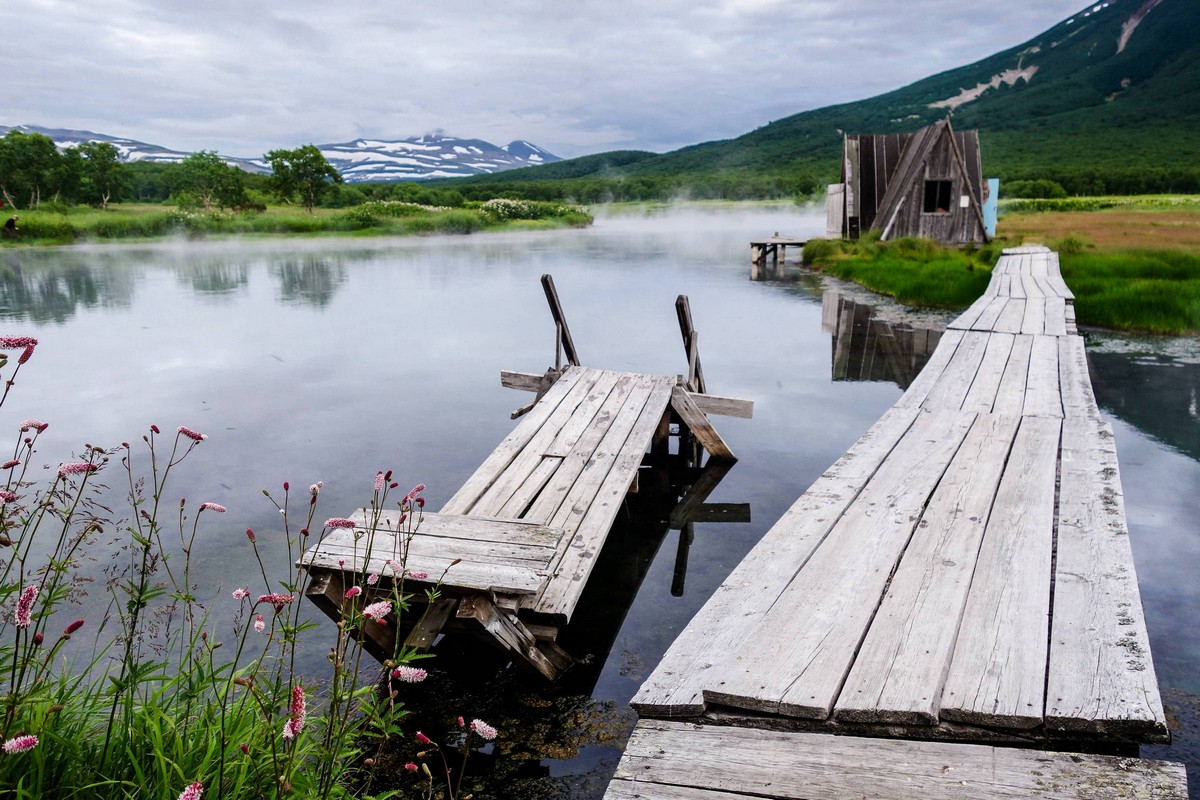 The helicopter acts as a good insect repellent :) ->

The above pics: how great things can be here. The following pics: how things normally are here – not so great; that is – if you’re not a fan of Kamchatkan mirages! -> 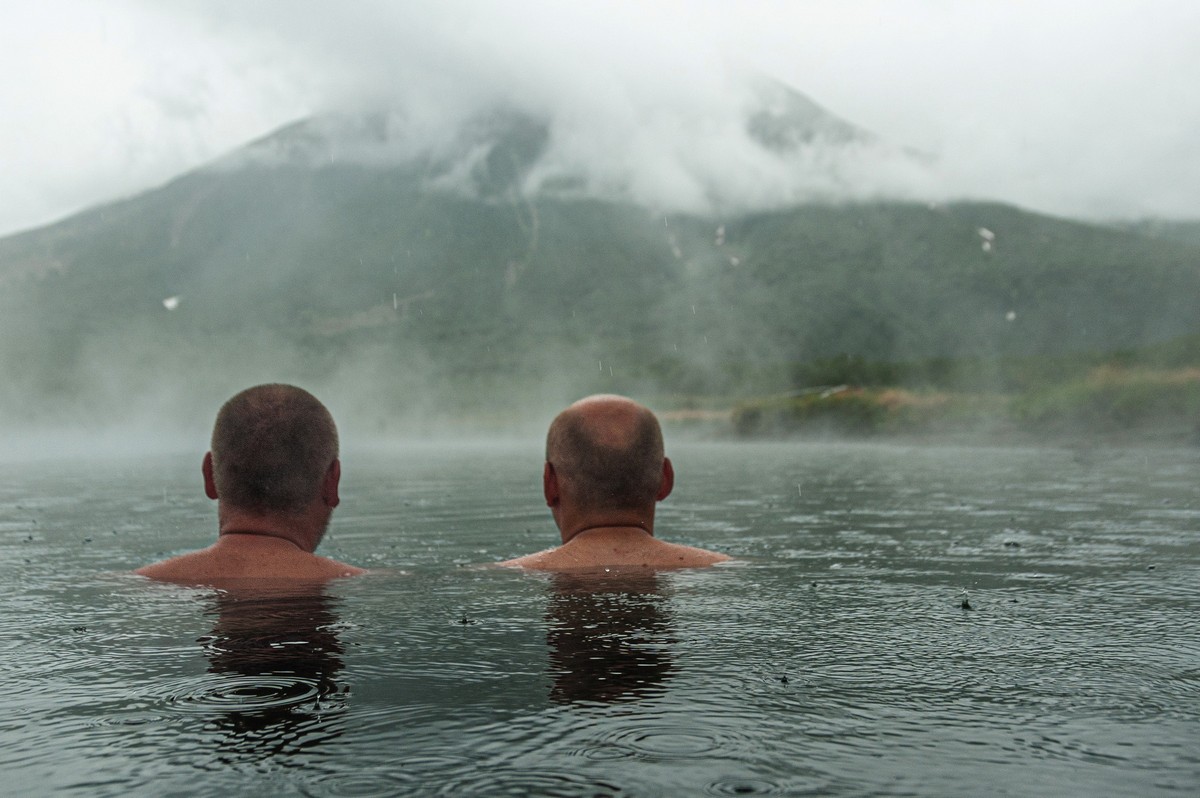 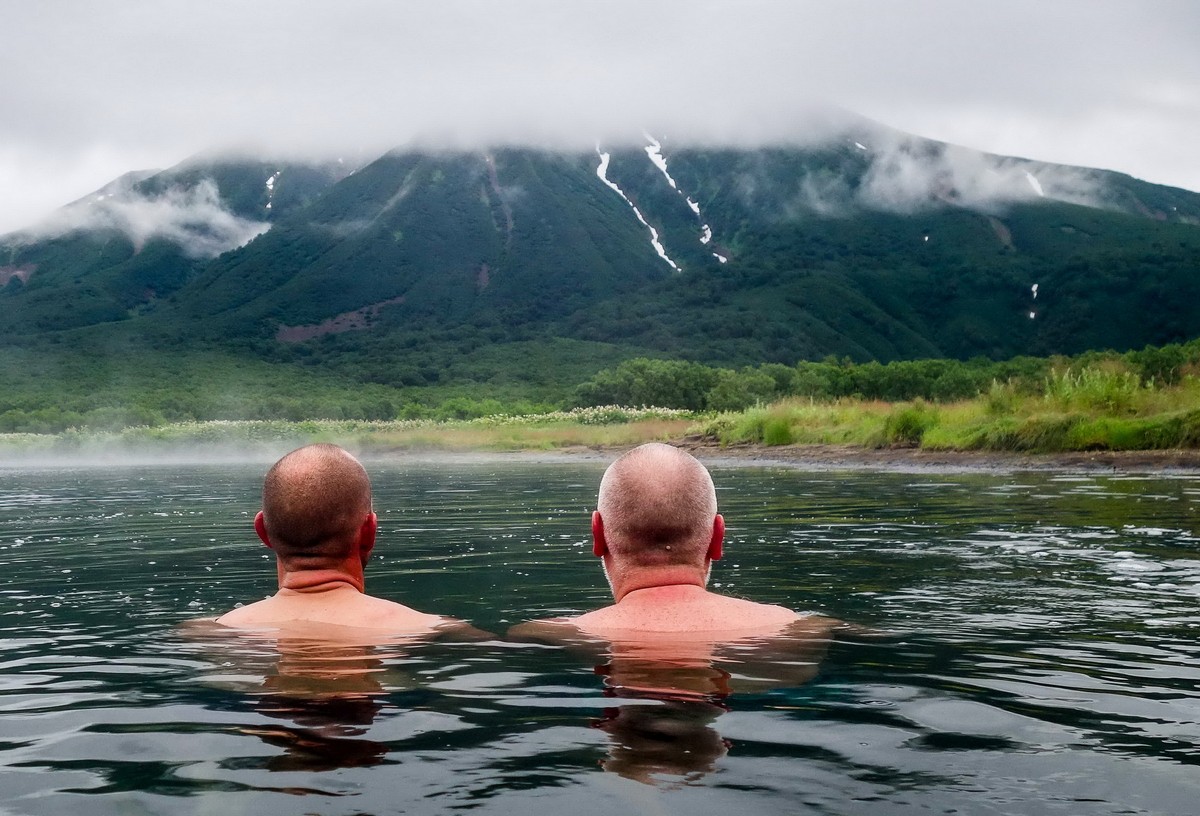 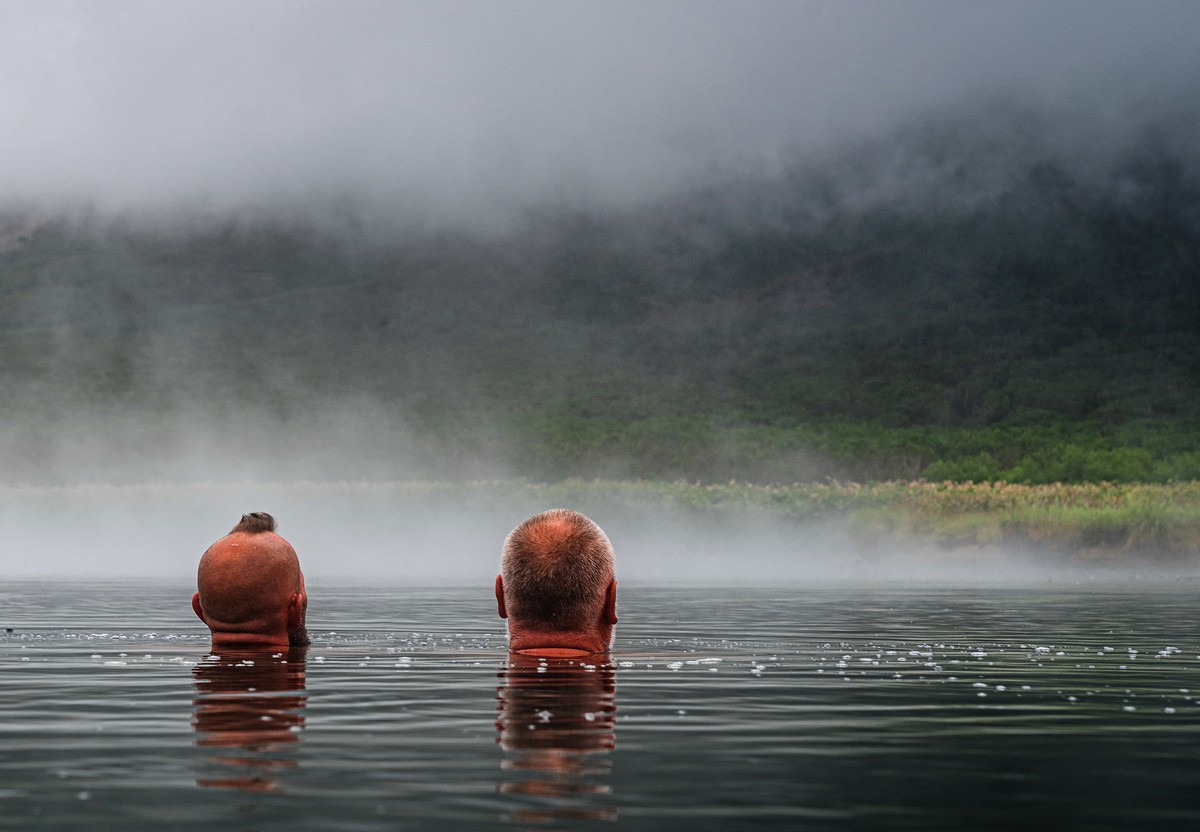 The rest of the snaps from Kamchatka-2021 are here.