But… it’s the only mountain on this list. Some of you will say ‘fair enough’ to that, too. But I’m certain many others won’t. For I know there a mountain fans who will insist there MUST be more, since there are so many OMG mountains with OMG walks thereon and OMG views therefrom. So, before I get to this entry, first, a bit of an explanation as to why there’s just one mountain!…

First, there are a great many volcanoes in the world, yet in this unashamedly elitist list, there’s just one volcano. Sure, it happens to be the ‘king’ of the list (it’s the king of the volcanoes too), but still: just one. And that’s it: I’ve mentioned before the clearly objective fact (!) that volcanoes are superior to mere mountains in terms of aesthetics; so why would there be more mountains in this list than volcanoes?

Second: when it comes to mountains, to reach the mind-blowing views that they can offer (incidentally, enhanced by the euphoria you get when the effects of altitude sickness start to take hold), you need to climb, and climb, and climb, and climb significant distances – normally up steep slopes. Now, my list is populated exclusively with objects that can be visited by practically any adult with a bare minimum of physical fitness. For example, a 10-15km trek across easy (not too steep) terrain, like walks to and around Krenitsyn volcano or Englichek Glacier.

Yes, besides physical preparedness, there’s also the fact that some objects require a not insignificant budget to get to, which might push them off-limits to some. However, the financial side of things is beyond the scope of discussion re my top-12.

Third, the other contenders for the only mountain to be featured on my list also happen to be in China. There are simply that many oh-my-grandiose mountains in this huge country. So I decided the single mountain simply had to be a Chinese one and not a mountain in any other country. Ok, I think I’m exhausting this caveat-proviso build-up, if not losing the thread completely. Enough! And the single mountain is…

A humungous hulk of granite with practically vertical walls more than two kilometers high. The views of the mountain itself and from the mountainside are out-of-this-world. There’s no other way to describe it:

And when it’s cloudy, as the mountaintops are so high, it fairly ‘swims’ on the clouds, since they hide anything lower than the peaks:

In the following pic, you can see a ridge. Along the top of it there’s a path up which curious tourists can get almost to the top:

As I mentioned above, there’s a great many mountains in China. All different kinds and shapes and sizes and designs – including Everest itself (whose peak sits directly on the China–Nepal border). But out of all of them (at least the ones I’ve seen), after Mount Hua, the silver medal has to go to Huangshan, meaning Yellow Mountain. 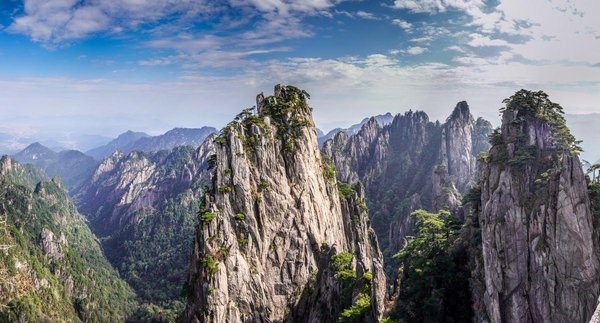 And for bronze – the sacred Mount Kailash in Tibet -> 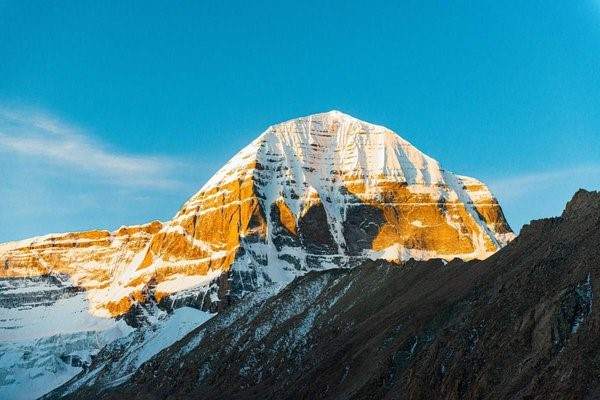 China really is the country for mountain lovers. I’m a mountain lover, and I’ve seen quite a few already there, but there are that many on my list of still-to-do significant must-see Chinese mountains that I need several more trips to China to do some serious checking-off. Curiously, outside the country, there’s precious little info on Chinese-mountain tourist attractions, since there are that many nationals in the country who are mountain lovers too that there’s little need to let the rest of the world know about them. If they did they’d be even more overcrowded – especially during the big national holidays (which should be avoided, btw, like the plague; especially Golden Week). So if you, too, are into your mega-mountain walks and fancy heading to China one day for a substantial portion thereof, make sure to check out my blogposts on China’s various mountain delights first. To my knowledge they’re the only sources of information on them not in the Chinese language that exist!