I’ve said this many times before, but I’ll just have to say it again: China has just so many unique natural places of off-the-scale beauty. Mountains, multicolored rocks, brightly-colored lakes. So much beauty that a trip to China is fast becoming a yearly tradition for me.

Ok, so here I was – back in China for this year’s portion of picturesqueness. First up this time: Huangshan, aka and literally meaning Yellow Mountain. We were here last year, but that didn’t count as we saw hardly anything of the place due to a thick fog. That’s why we made a beeline for it this year given the clement weather upon arrival. We wanted to finally see what all the fuss is about re this place – so many folks on the internet say how out-of-this-world stunning it is…

Well what can I say? I can say the internet doesn’t (always:) lie. This place is just oh-my-gobsmackingly gorgeous! A jagged-ragged mountain range, granite rock (the stone has a slightly yellow hue to it, therefore the name (黄山)), jutting rock columns with sheer cliff faces and pine trees on the thin peaks. But why am I trying to describe it in words? They will always be lacking no matter how descriptive. Just check out the pics instead: 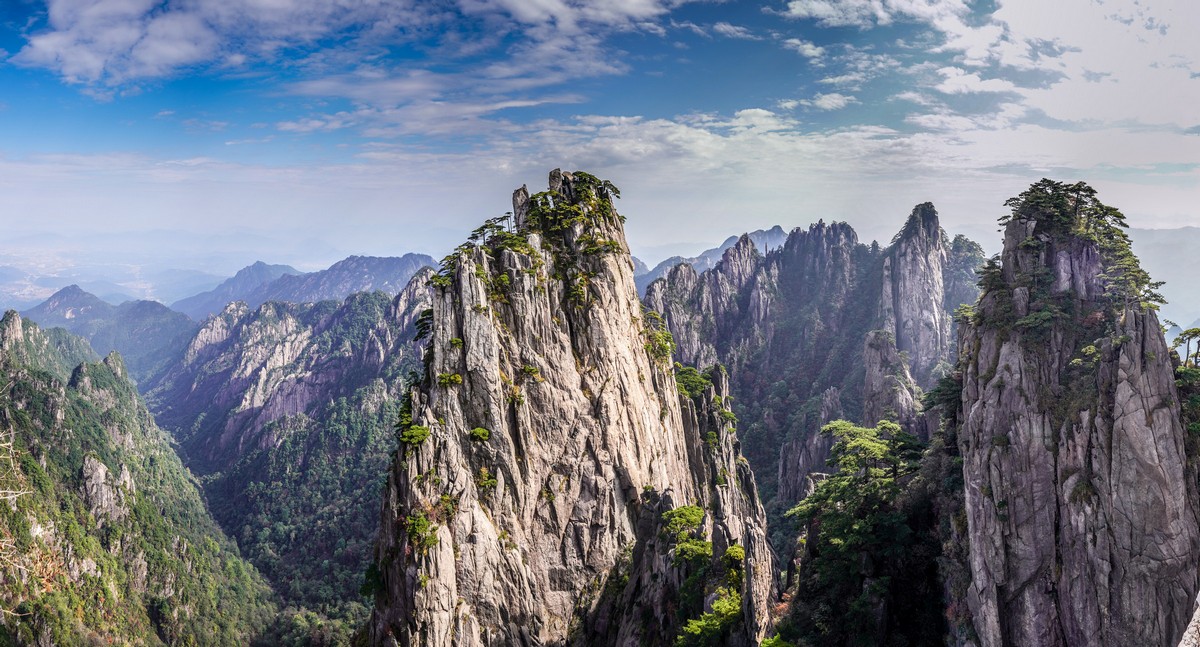 The internet tells me that these mountains were formed around 100 million years ago (that is, in the era of the dinosaurs). Later, glaciers and erosion created these fanciful design configurations, while today the place is a protected national park. The internet also tells me that the place is one of the most popular tourist destinations in China. In 2007 apparently 1.5 million tourists visited the mountains! Well, looking at pics of the lines for the cable cars here – I can believe it. But that was 11 years ago. Today those numbers might have increased several-fold. Let’s say they only increased two-fold, that’d mean there’d be 10,000 visitors per day! And all of them wanting to take one of the three cable cars. That translates into the line therefor lasting three or four hours – about the same length of time it takes you to get to the top (steadily) on foot!

UPD: I was about right with my projection of the number of tourists today based on the number back in 2007. I found a Chinese site that puts the figure for 2017 at 3.36 million!

Here’s a randomly chosen pic of the line for the cable car: 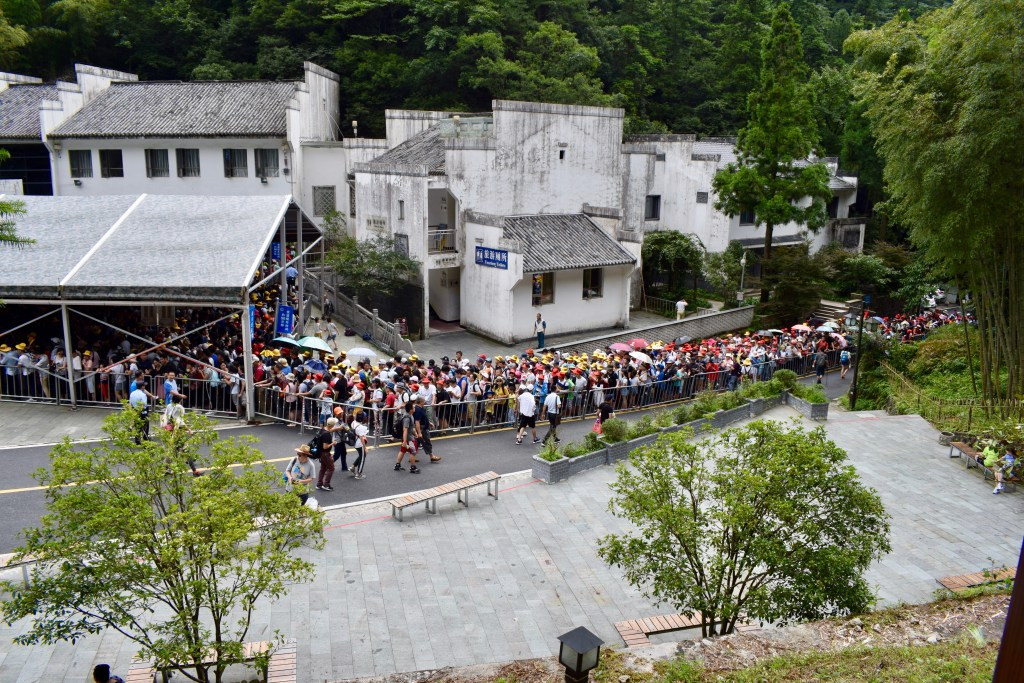 Remember what I told you last week? That the perfect time for a spot of China-tourism is in the lull after Golden Week? Well, just in case you still need convincing, check out the line (for the same cable car) during the lull – when we were there:

On we hop, and up the mountain we whizz!

Fifteen minutes later and we were at the top. There, we came to a junction of many divergent paths, all with directions neatly signposted… – all in Chinese: no English! But we managed – it helps knowing some basic Chinese symbols ). And the paths and steps themselves were all really neat and tidy and sturdy underfoot. And the views all around?…

For those who tire of all the climbing up steps – porters can be hired (just as in many Chinese mountain parks) for a small fee: 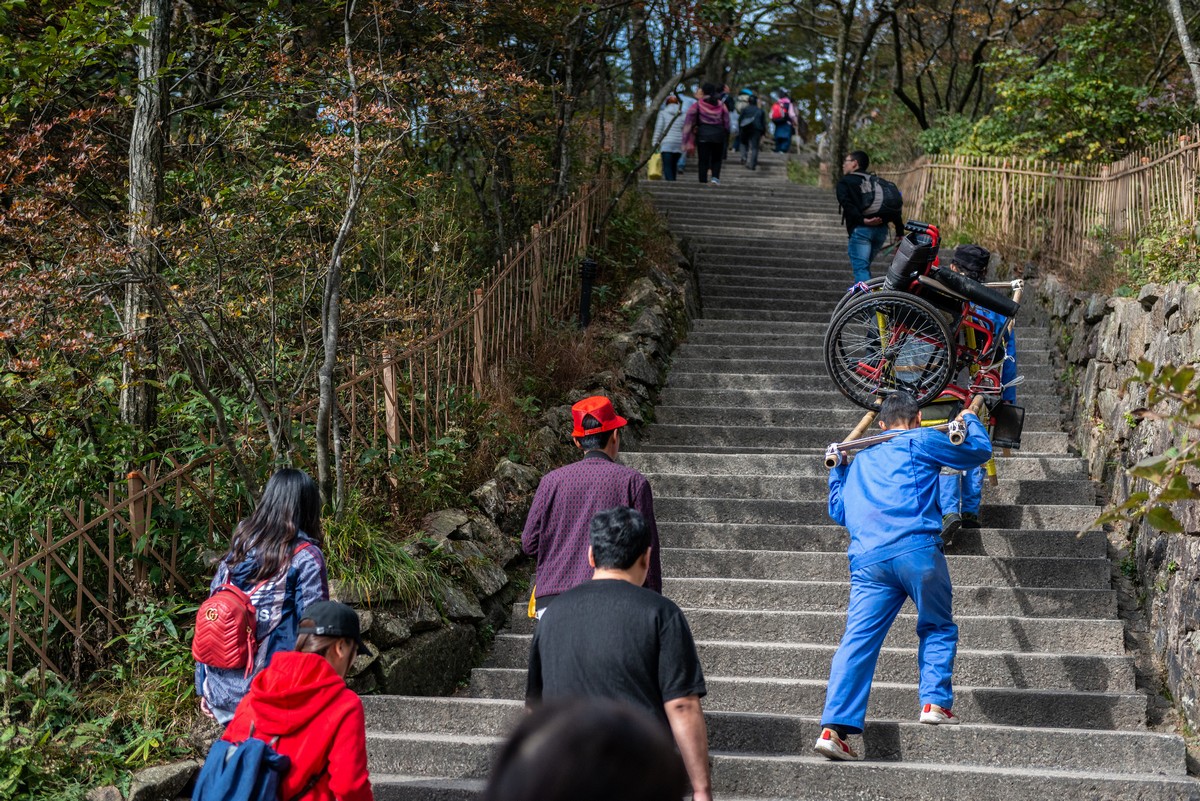 A quick separate note on how impressive the… touristic infrastructure is here. The paths and steps: top notch. Strong fencing and/or hand rails where needed: check. Neat looking trash cans, some cut into the rock – everywhere. Staff picking up litter: very common. Public conveniences: plentiful and pristine (less so, perhaps, during Golden Week). Every half an hour along a path: cafes and other Chinese fast-food outlets (yum!).

So yes: the set-up here is real nice for the visiting tourist. But you need more than just a day to take it all in – and just one sunset wouldn’t be enough. The whole route takes two full days. You can stay the night at the top too in one of the decent hotels. The food isn’t haute cuisine, but the beds are comfy and the rooms clean. 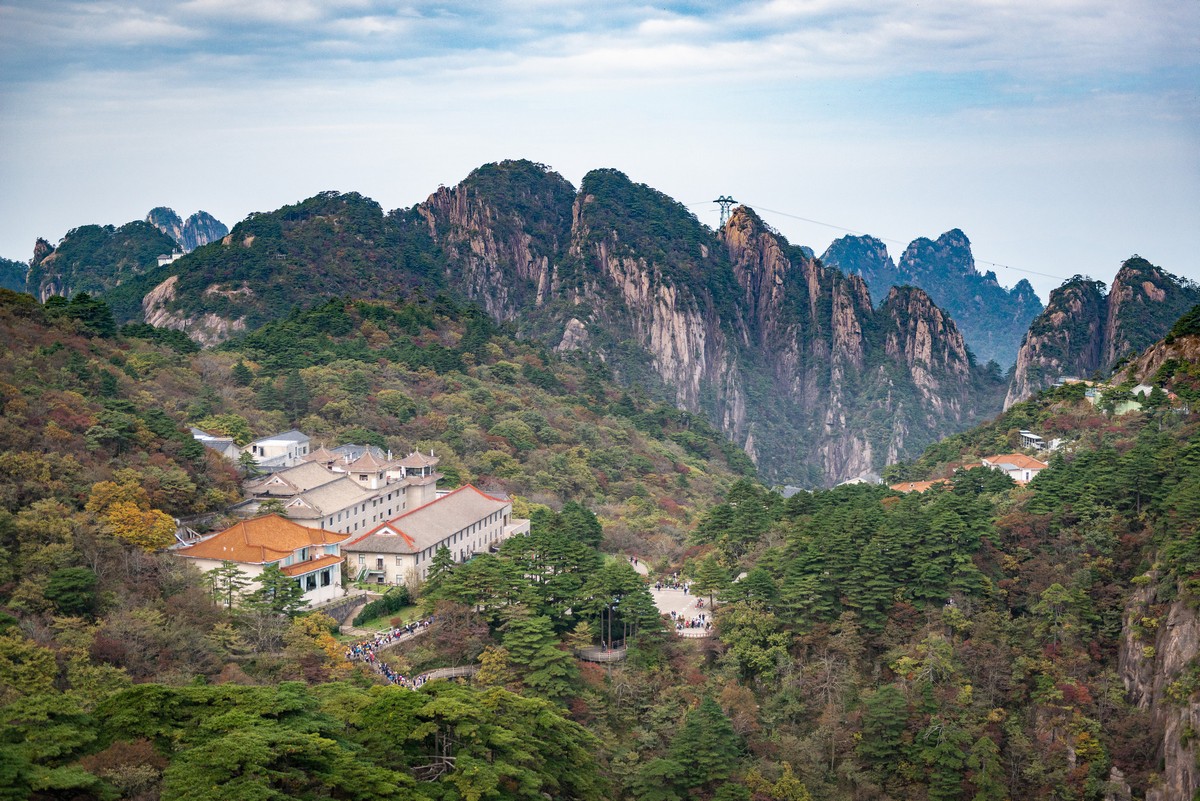 Here’s another hotel, which doubles up as a weather station: 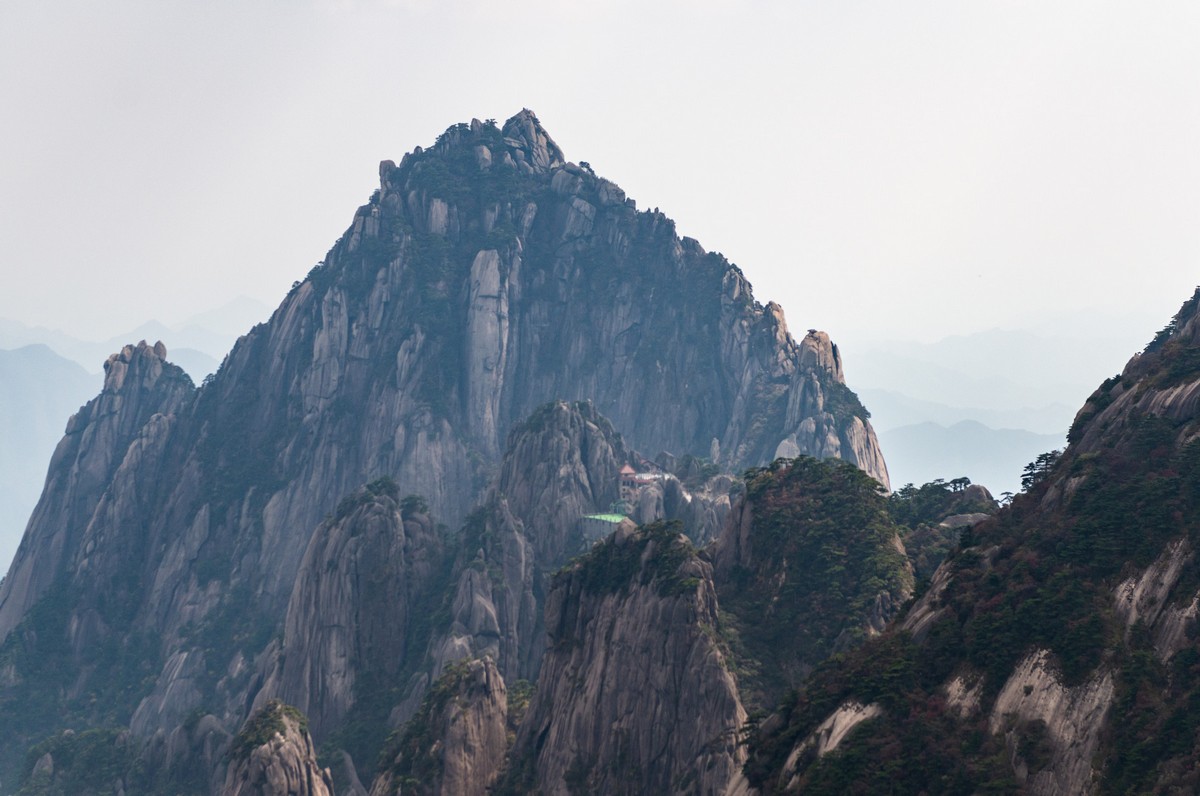 But for next time… – yep: gotta stay over in that one:

Btw, you can stay overnight cheaply here in a tent which you can rent from a hotel for a night for not much at all.

Meanwhile, onward we march (and snap)…

Our day of trekking around Huangshan was my first fully active jaunt since I broke my leg in Summer in Kamchatka. Accordingly, since the leg in question is still not entirely rehabilitated, I had to take it easy – meaning a few of the mountain range’s touristic delights I had to forego. For example, I didn’t want to risk descending into the Xihai Canyon (西海, ‘West Sea’). Which is a real shame of course since, as pics verify, it’s one of the most impressive of all Huangshan’s awesomenesses (also steepest!). However, my travel companion, D.Z. – handily, as budding a photographer as they come – did take the plunge. Here he is up top: 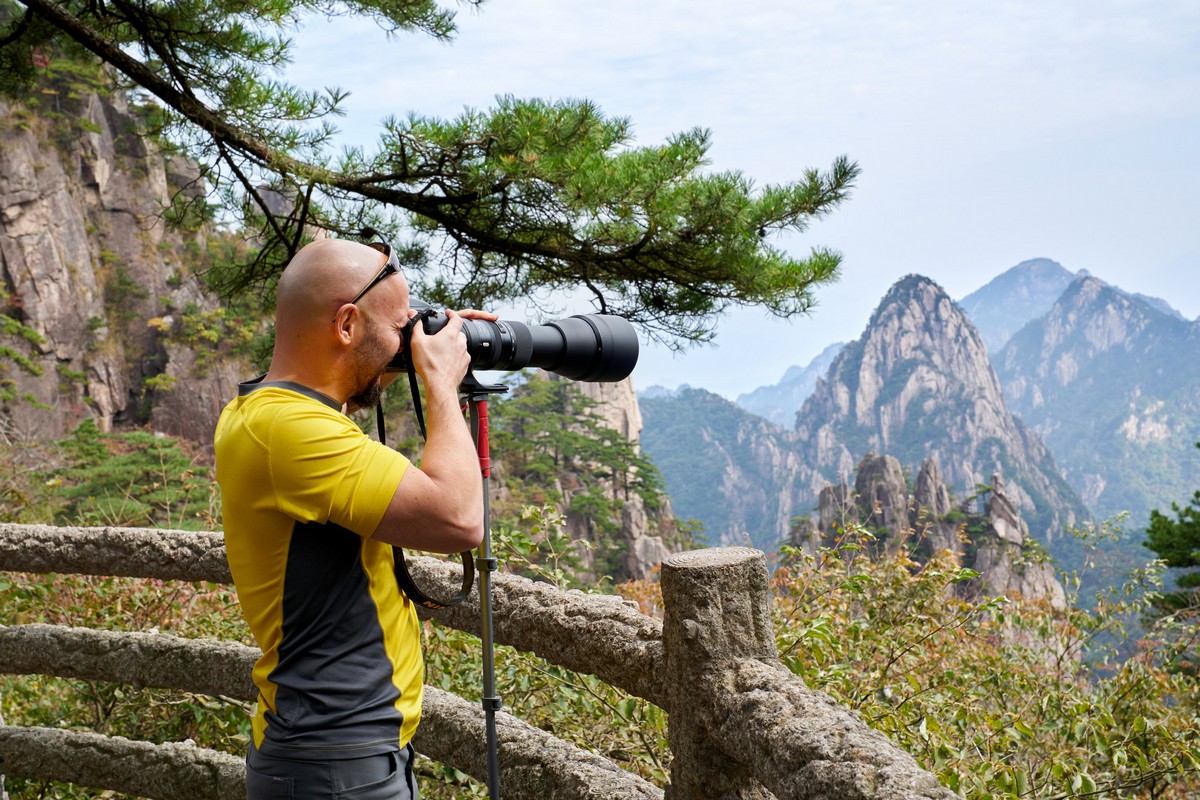 And here are his masterpieces:

He descended on foot – down the steps. He came back up, mercifully by funicular: 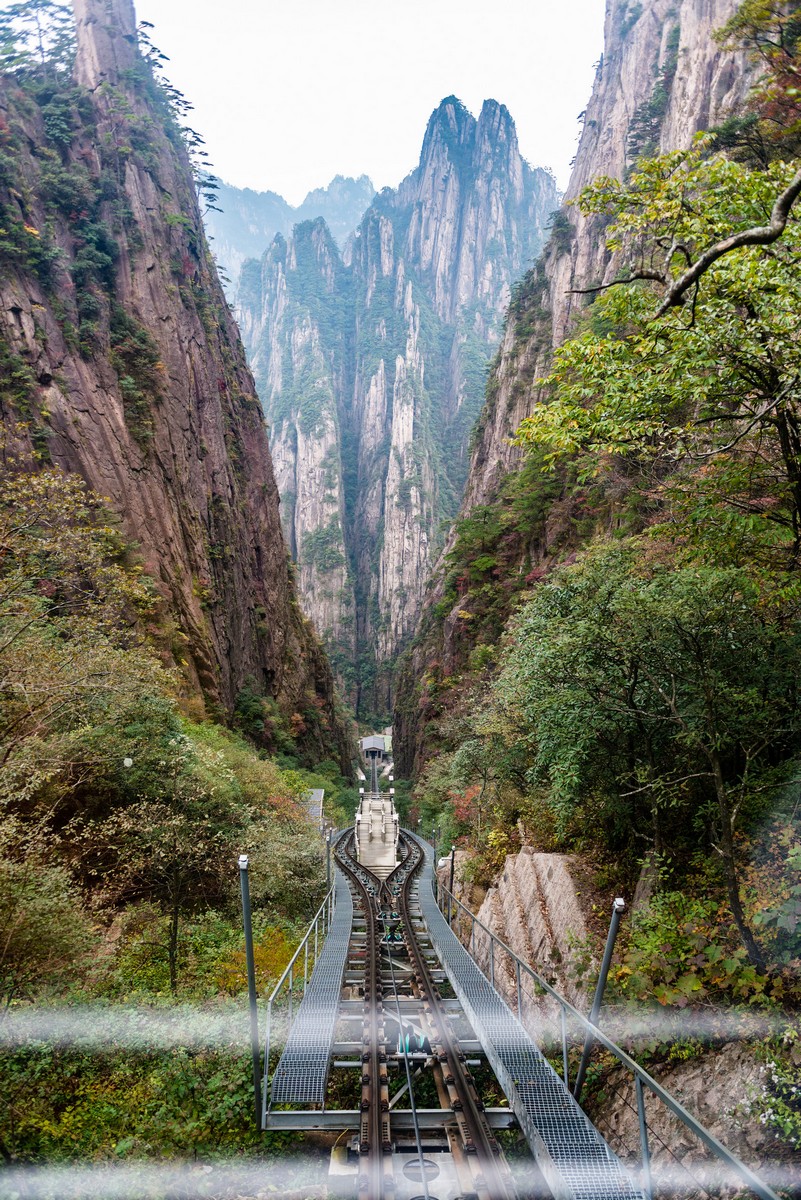 Just to remind: that was Xihai Canyon – on the map (further below) it’s in the top left corner.

Meanwhile: sunset time! And we were in the perfect spot for it: Turtle Peak: 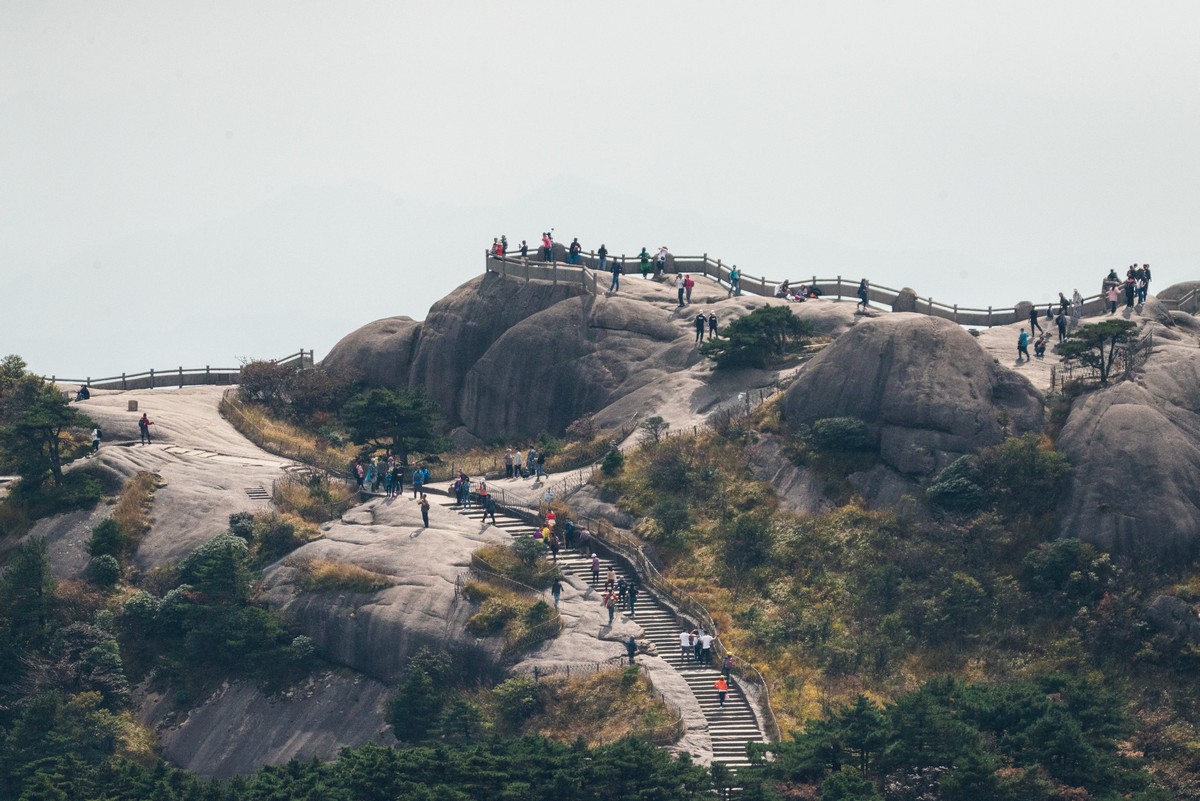 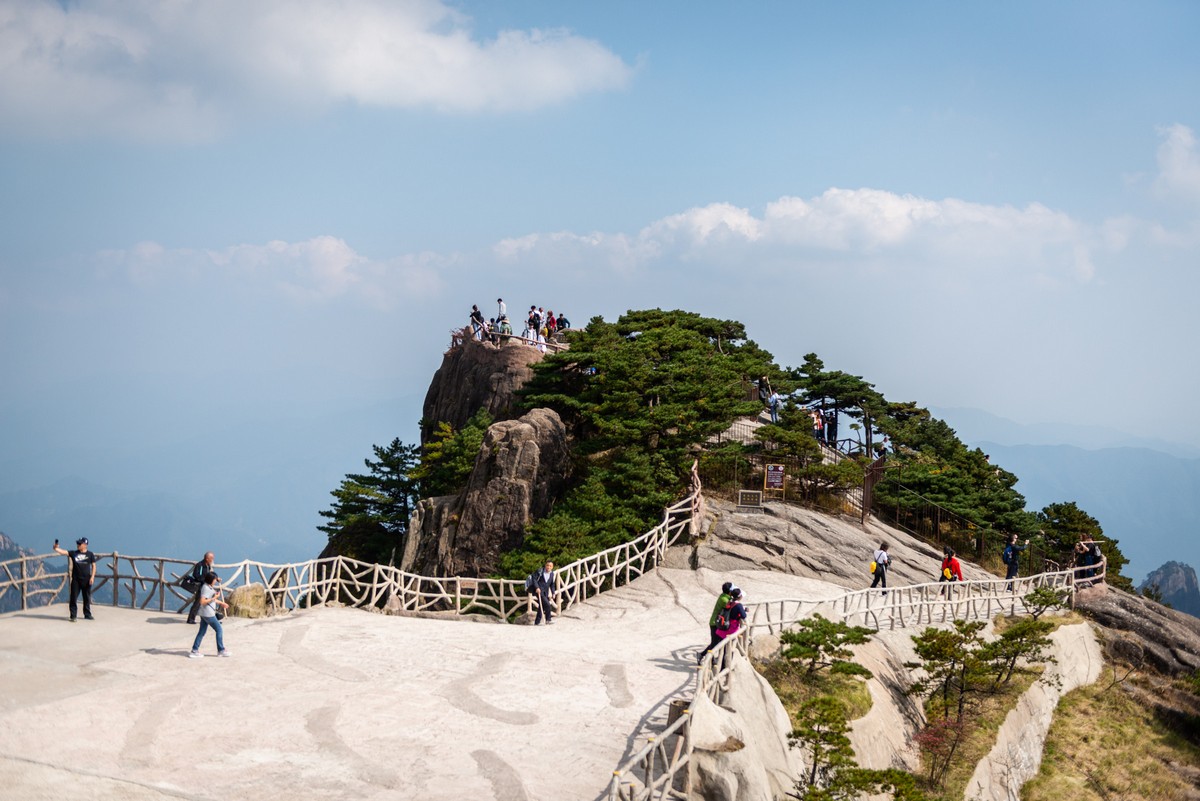 But – despite this being (very) low season, it got crowded there (can’t imagine what it’s like in (very) high season!): 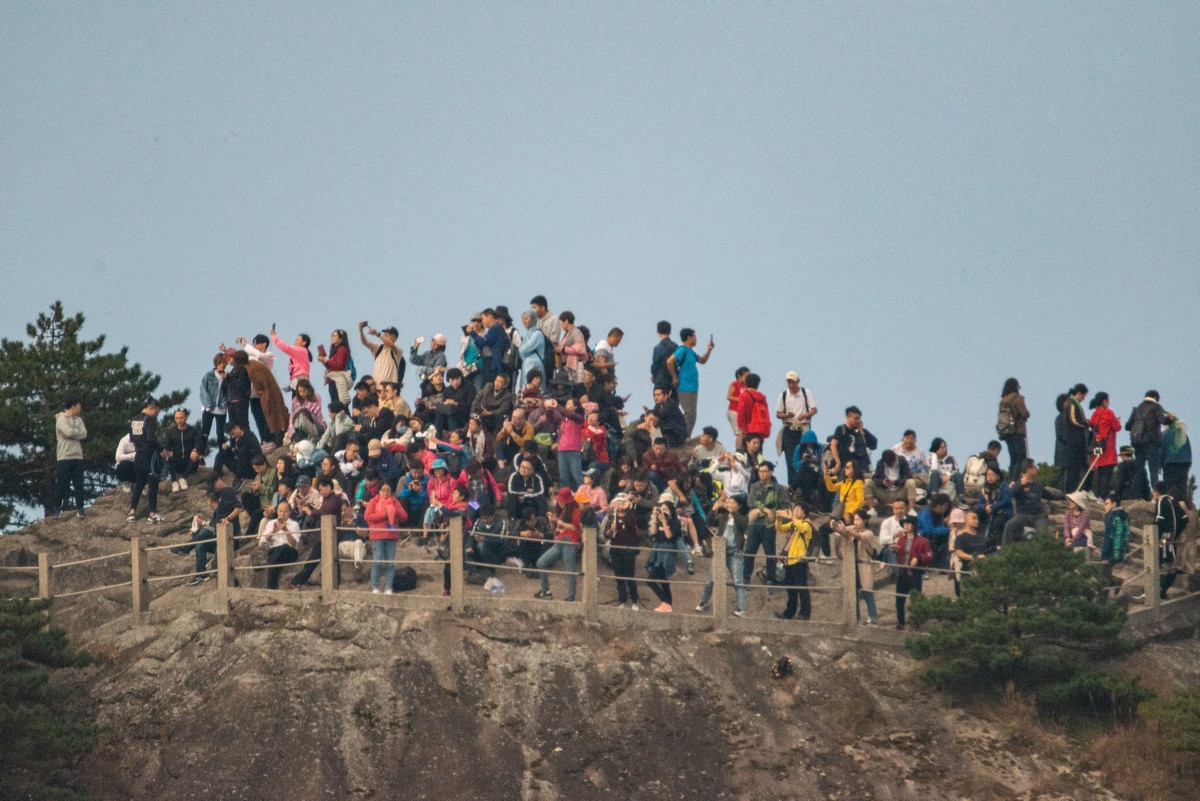 Despite its being partly shrouded in cloud, the setting sun was rather fantastic:

The following morning, the sunrise was a bit of a let-down. We couldn’t even see the sun behind all the cloud. What we could see was a huge granite hill: 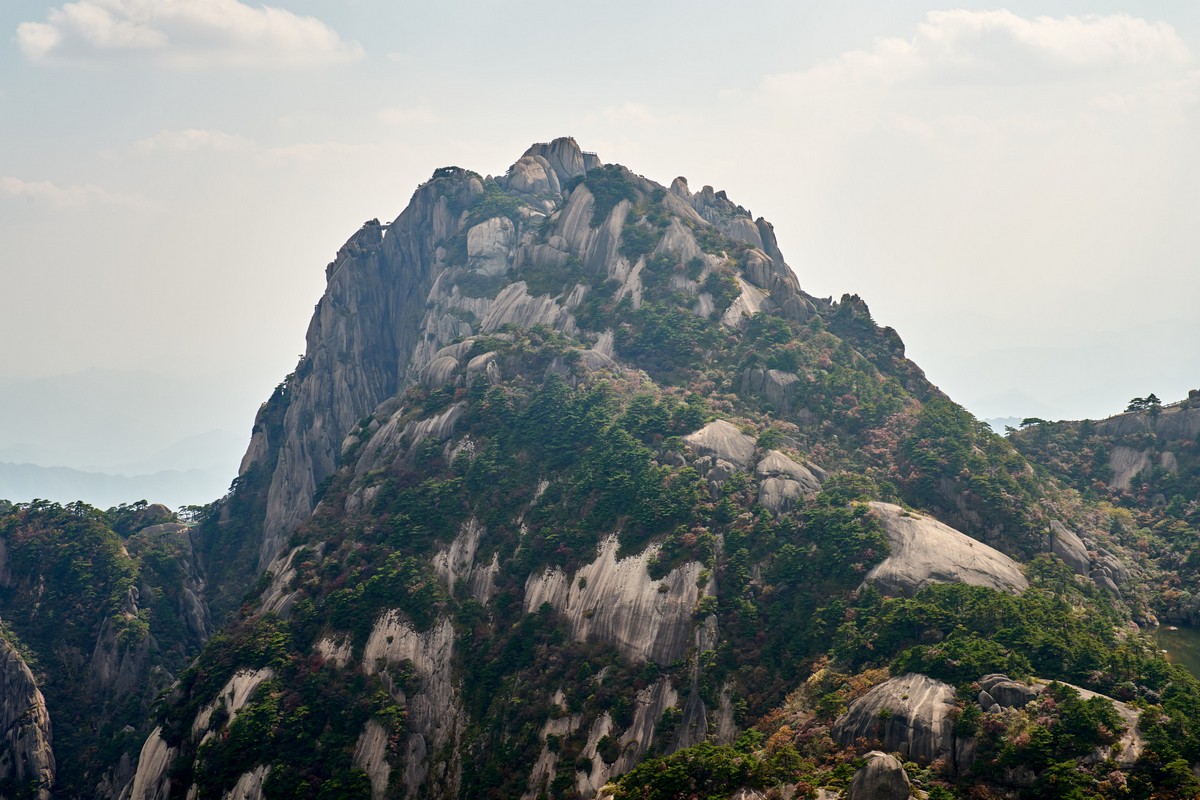 …But what’s that there up on top?

…A viewing platform! We just had to get up those steps to it:

But before we came to the steps we had to navigate this here scary path-on-stilts. Yikes!

This is Lotus Peak, btw. Alas, it was closed for repairs. 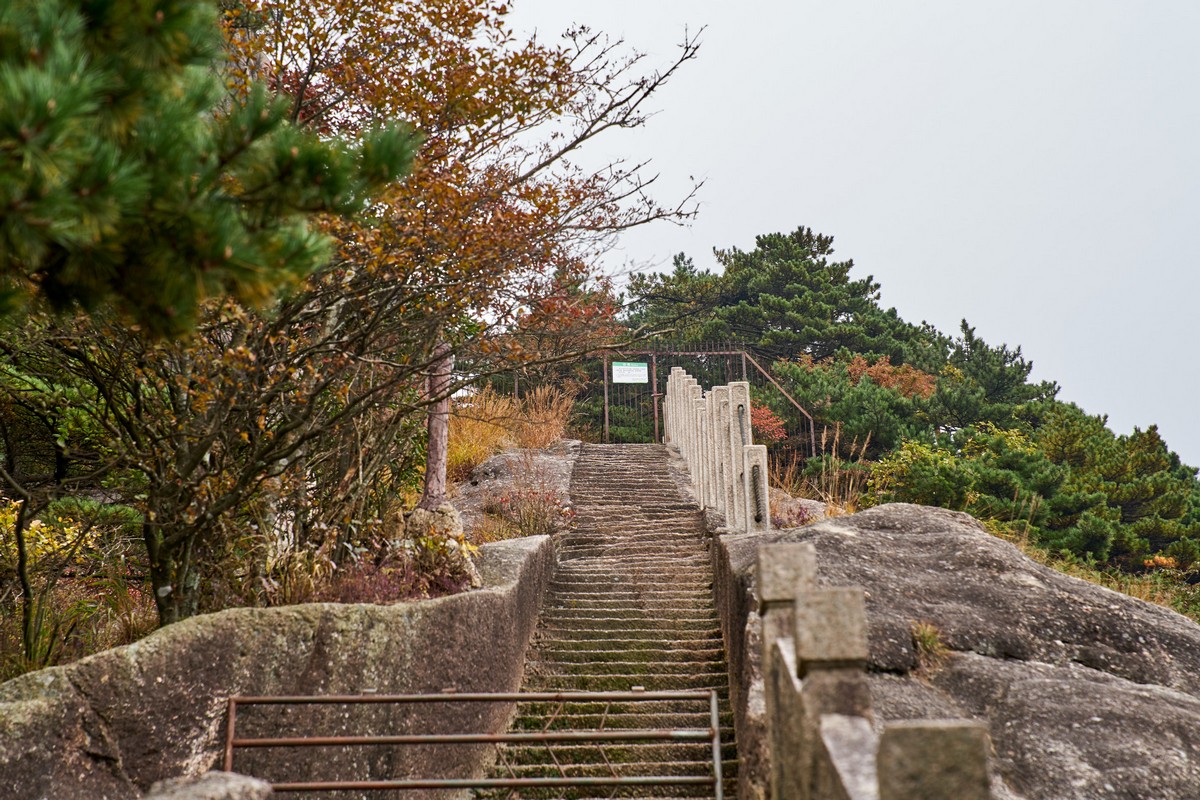 It turned out that the two best peaks of Huangshan, Lotus Peak and Tiandu Peak (天都峰, ‘Heavenly Capital’), take five-year turns to open: one half-decade – Lotus, the next – Tiandu, and so on. Next year Tiandu will be closed and Lotus will be opened. What does this mean for us? Yep – we’ll just have to get back here next year to check out Lotus! Actually, we’ll have to get back in six years time too, since – due to the recovering leg again – I wasn’t able to scale its heights. D.Z. was able this time – and here are his pics: 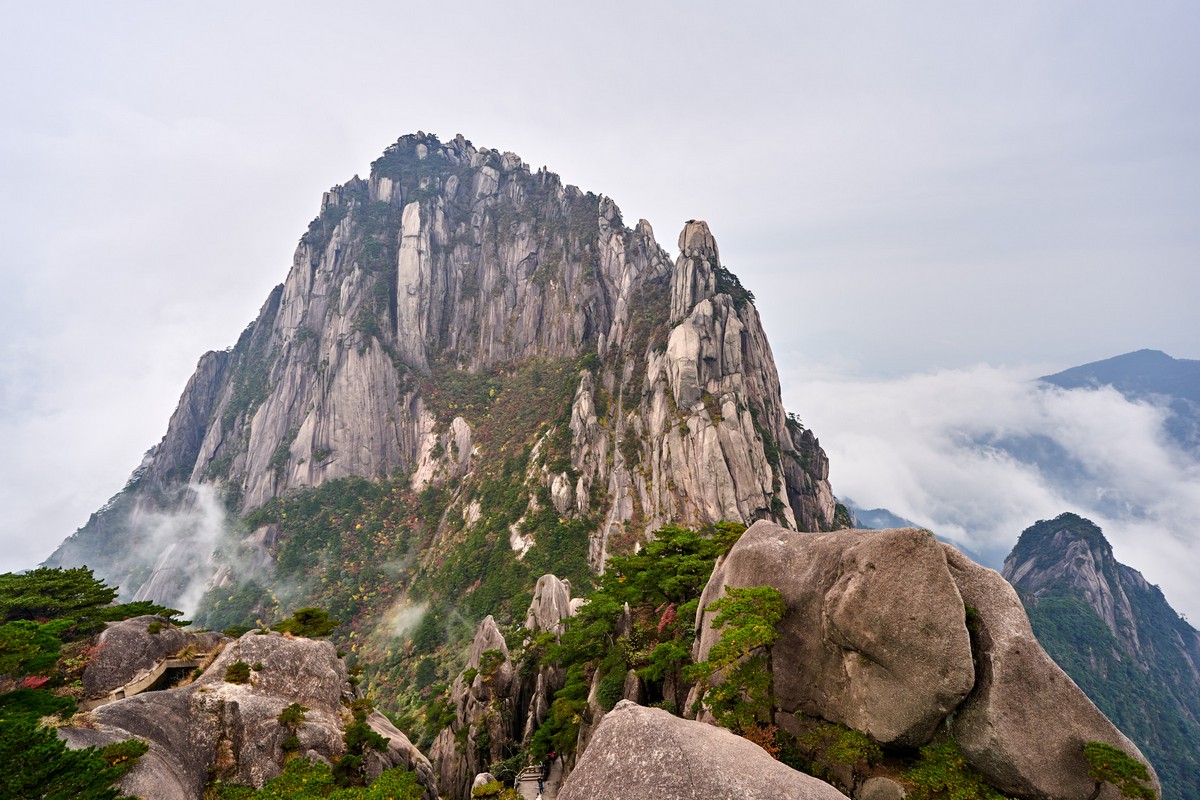 If you look closely, you might just make out a stairway that runs vertical up the rock:

At the top those steps get reeeaaal thin, but – oh my – the views therefrom:

Oh yes: I just gotta get back here!…

The steps back down:

Getting back down to the very bottom – to the bus park takes an hour or two. Who’d have thought going down steps could be so tough?!

My travel companions finally made it back down, but their legs were almost dropping off with over-exertion; after all, this was our first spot of mountain scaling, and they’d hardly had a chance to warm up their muscles. Take-away: before a mega-climb in Huangshan, have a quick session in the gym in the hotel or go for a run ).

All righty. That’s about it. Just a few PS notes on logistics.

You can get to Huangshan in various ways. The main one – via the local airport, through which there are many flights. There’s also the train, apparently, or coach – which takes five or six hours from Shanghai. Ok; that’s it for logistics.

What’s the best route for your walk? I’d say – anticlockwise, as shown on the map (clockwise is doable too, I guess). So, for example: spend the night in the ‘Hot Springs’ hotel (next to, you guessed it – hot springs; ringed in red, below), and at the crack of dawn walk to the cable car (a little over a kilometer) (avoiding the need for the bus). Up the cable car, out and clamber up Lotus, then descend into Xihai Canyon. Spend the night in Bai Yun Hotel (also circled in red), catch the sunrise in the morning, and then on to finish the circle. Done. Nice. Phew. Highly recommended! Good luck!…

Btw, it snows here in the winter – which adds a whole other aspect to the natural beauty. Check these pics out. However, they don’t clear the paths, so walking them – especially the steep ones: bad idea. So bad, they close off many of the locations (including Lotus, Tiandu and Xihai) for December – March. Thus, alas, no chance of spending Christmas or seeing in the New Year here. Shame!

All the photos from Huangshan are, at least for now, here.