Onwards we travel around China. Next up: grottos…

Nothing grotty about these underground wonders:

There’s practically zero info about these here caverns. They were discovered accidentally only in the year 2000 by a farmer who for some reason was digging there with a shovel. (He was lucky – what if he’d have fallen in?) Anyway, a while later the authorities cleaned them all up, signposted them up, and added multicolored lights to make them nice and touristy. 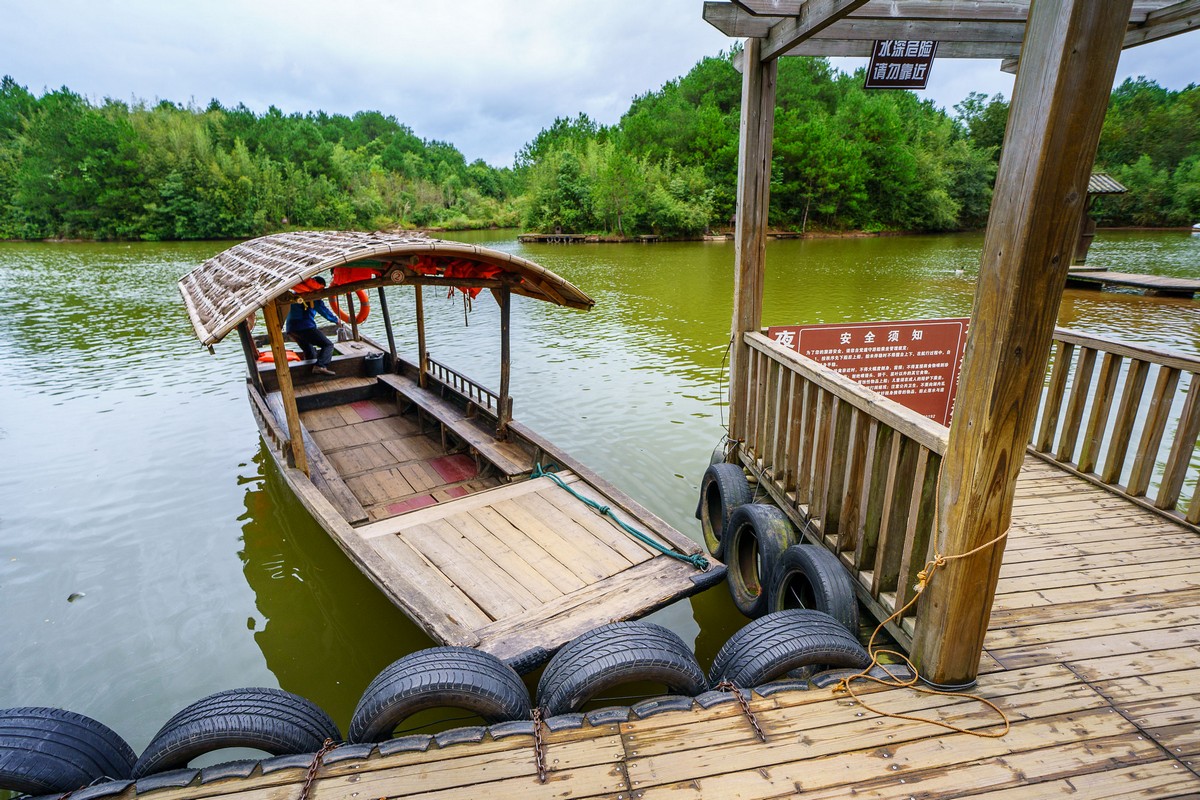 So what do we know about these caves? Well, I did do a search on the internet – but in English there’s almost nothing on them. There is info on Chinese sites, but still only a little; example (translated from the Chinese): ‘The grottos lie 30 degrees north latitude, as do the Egyptian pyramids, the Bermuda Triangle and Noah’s ark’. Hmmm. Not sure Noah’s ark’s still knocking about these days, 30 degrees latitude or no :).

Here’s practically all I did find: archeologists/historians reckon they were dug out during the Jin dynasty (265–420). Ah yes – which reminds me: these aren’t natural caves. These are manmade! Subtle difference, I know, but there you go….

Now, 1700 years ago in China there’d already long existed writing, historical records and archives. Thing is – there’s no mention in any such archives of these here grottos or their builders. No mention either of where they moved all the rock that had been chiseled out – and we’d have been talking megatons!

One thing we do know for sure then is that they’re aptly titled: mysterious :).

Just who were these busy bees who went to all the trouble to dig out colossal caverns in the ground? And why? What were they for? And where did the busy bees disappear to – and why? All a mystery.

The only data you can find on the caverns is statistical: in all there are 36 grottos, three of which are equipped, lit up and open to tourists (Nos. 2, 25 and 35). Let’s go check that trio out then…

Just like most everywhere in the country, practically all the maps around here are in Chinese only. So you need at least a basic understanding of a few key symbols (entrance, exit; right, left; north, south, east, west; numbers) otherwise you’ll have real trouble navigating around the place. In the second map below – brief English translations: a real find :).

The lighting in the caves really does add to the experience. Sometimes the colors of the lights change. Spookily awesome!

Cave 25. You get to it by boat: first you get close on a larger boat; then, as you get near, you transfer to a tiny boat – one which can fit under the cave’s arches.

They say there are three more ‘floors’ like this under the water:

Now I see why they need the tiny (low) boats!

Next up: Cave No. 2 – mostly all dry, but with the odd pools. Whether these were intended to be pools or if the water flooded certain areas – I’m not sure.

This is a rocky element the mysterious diggers of yester-millennium didn’t bother with. Or is it a secret entrance? Where’s the button to press to open it up? :)

All the walls and ceilings were carefully chiseled out to give this here notch effect. How or why – you guessed it: another mystery. And a mystery it will no doubt always stay.

And finally – the biggest and the best cave – No. 35. A modest-looking entrance, and then inside – boom!

Not far from the grottos is the city of Huangshan. And 50km to the north of the city is the mountain of the same name (meaning Yellow Mountain), formed around 100 million years ago (if we’re to believe the internet) – here.

Oh my grotto! Insanely beautiful and mandatorily must-see! Well we did see it… rather – some of it…

Alas No. 1: It was cloudy and rainy, as the internet warned us it would be :(.

Alas No. 2: Due to Alas No. 1 there was nothing to see up there! We should have known better: known the odds of clear skies and sun and OMG-views would be very poor. But, you know, we’re optimistic, positive types. You have to be in the industry we’re in. But I digress… 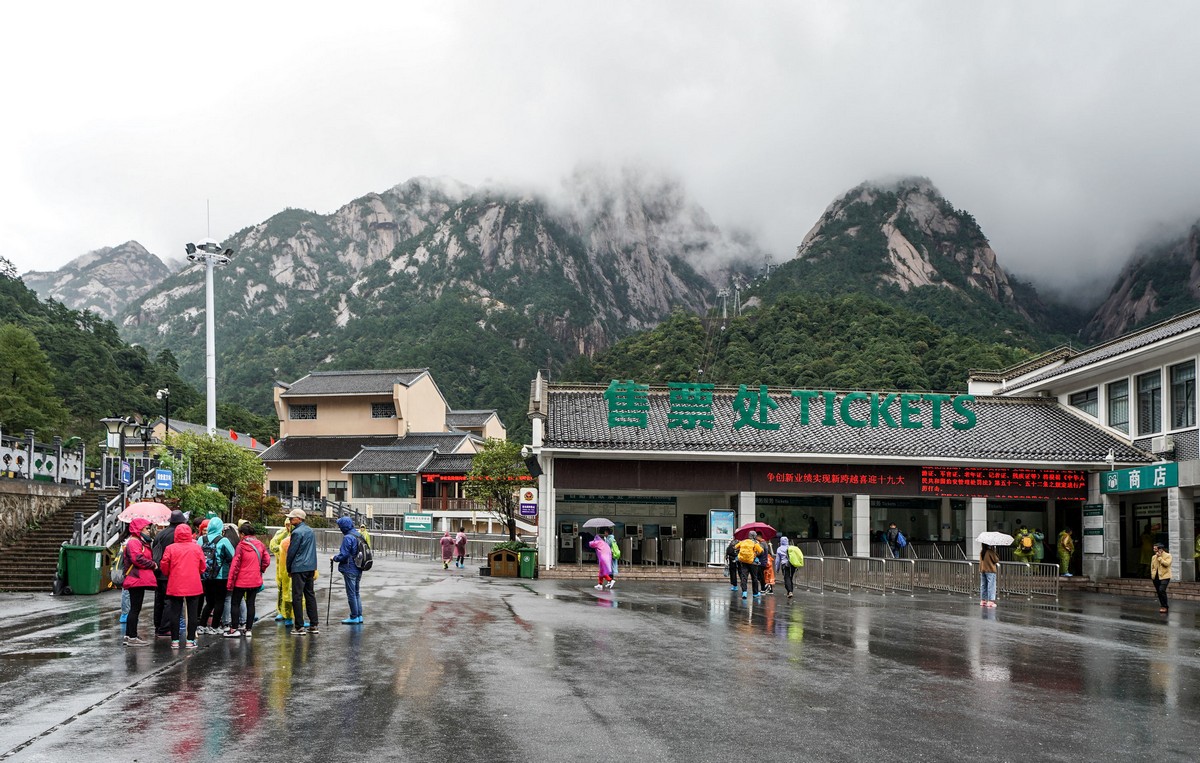 Yeh!-No. 1: We were here the week after Golden Week. So though wet and miserable, at least things weren’t made worse by long lines and folks spoiling the photo-ops :). 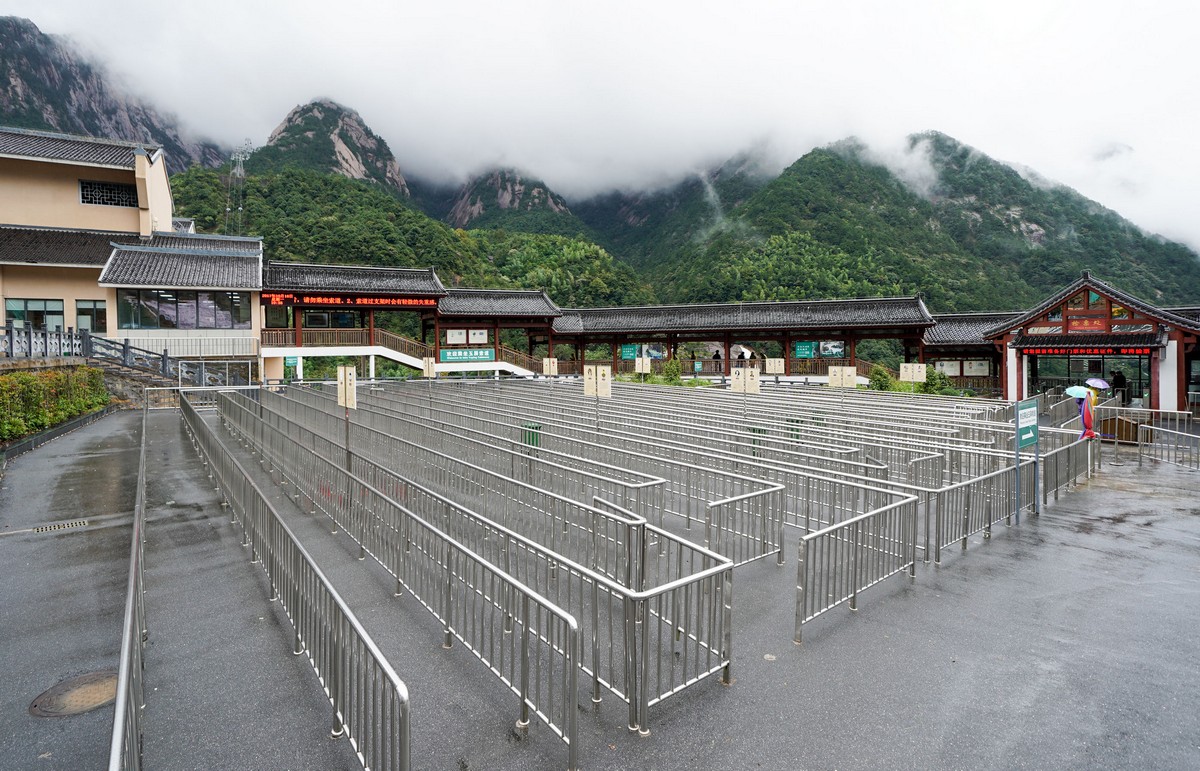 And there was no one at all using the cable car to get up to the top. They say you can take the steps, which take two or three or four hours. That sounded far to exhausting: we took the cable car…

Up we go – right through the clouds! 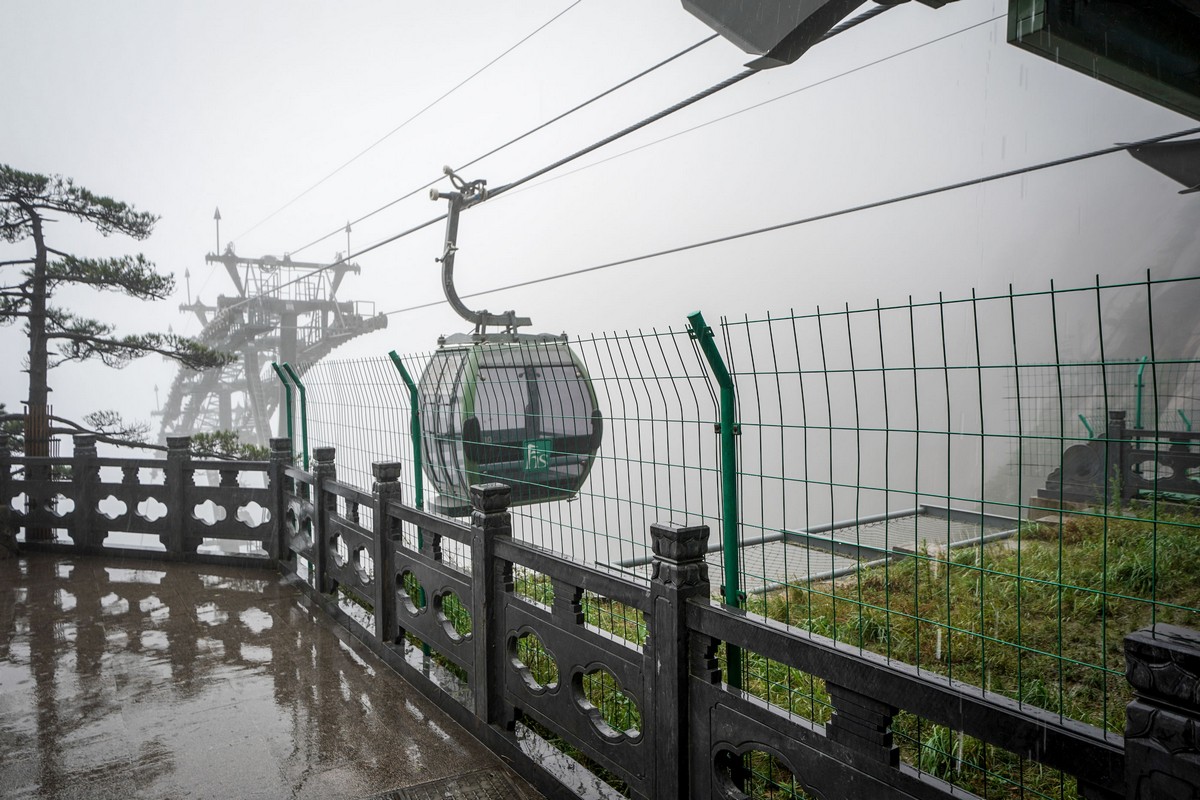 A good two or three of four days could be spent up here easily – until your photo kit runs out of battery or there’s no more space on your memory cards. 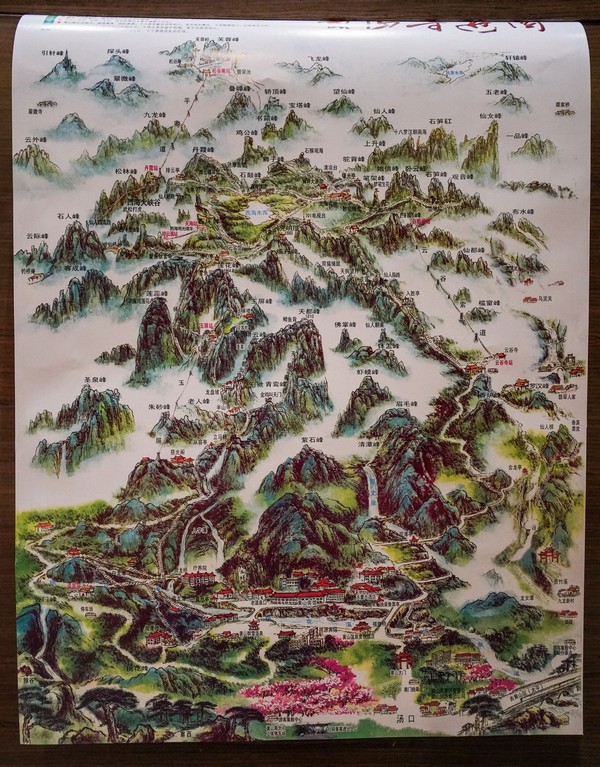 However, memory cards filling up is unlikely. There ain’t a great deal to see and snap given the poor weather conditions.

Here’s what it can look like on a fine day:

Onwards we march. Btw, up top you can stay the night in one of several decent hotels.

All food, napkins, water… you name it – it all gets carried up, like this:

And so, drenched to the skin, we head back – up! – to get back down into the valley, as this here sign tells us to. 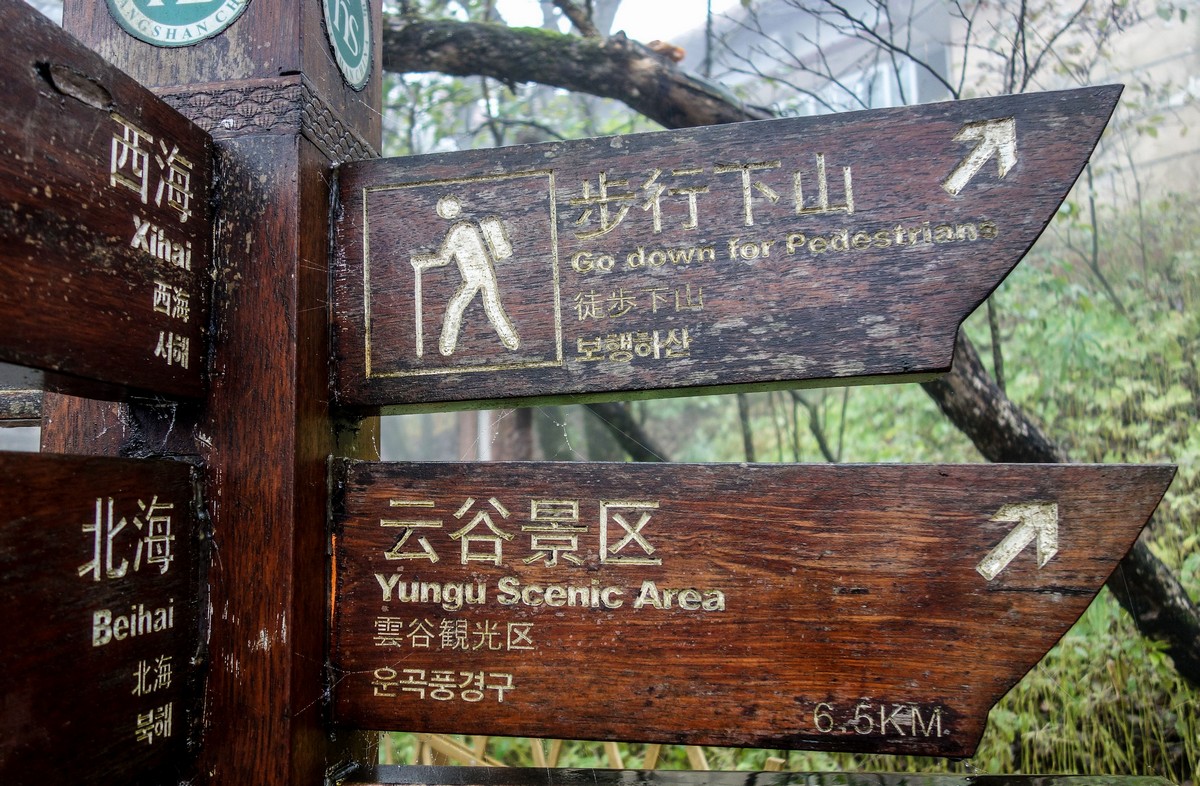 That’s all for today folks. Back soon with more China-touristic on-the-road tales…