Today’s post is all about a sacred mountain, Mount Hua, which is about 120 kilometers to the east of Xi’an.

So, Mount Hua, aka 华山, aka Huà shān, meaning ‘China mountain’ or ‘Big China’ or ‘Mountain of the Whole of China’ – one of the Five Great Mountains – is a sacred Taoist mountain; therefore: must-see.

It was almost two weeks since China’s Golden Week public holiday, so, as could be expected, the number of tourists doing touristy things had risen quite markedly since the lull. 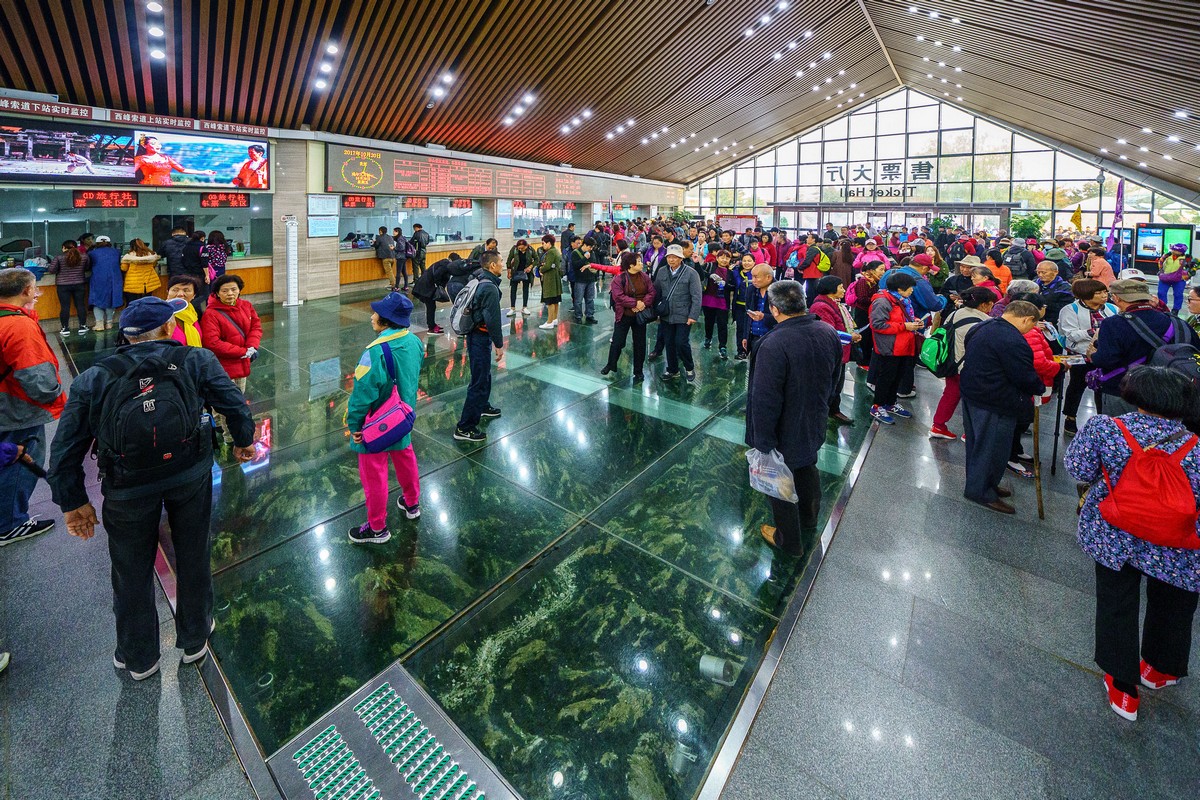 Under the glass – a scale model of where we’re off to: 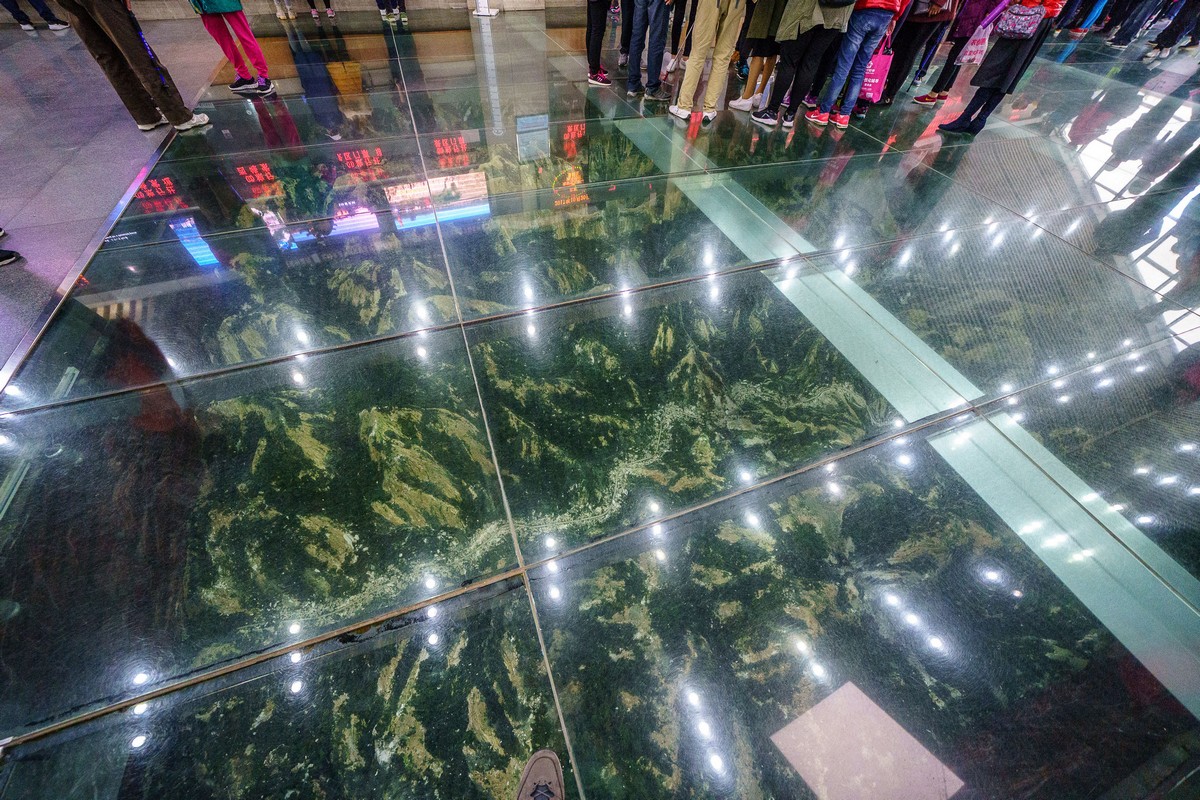 Next: bus to the funicular, which takes quite a while. But it’s a good opportunity for 40 winks… 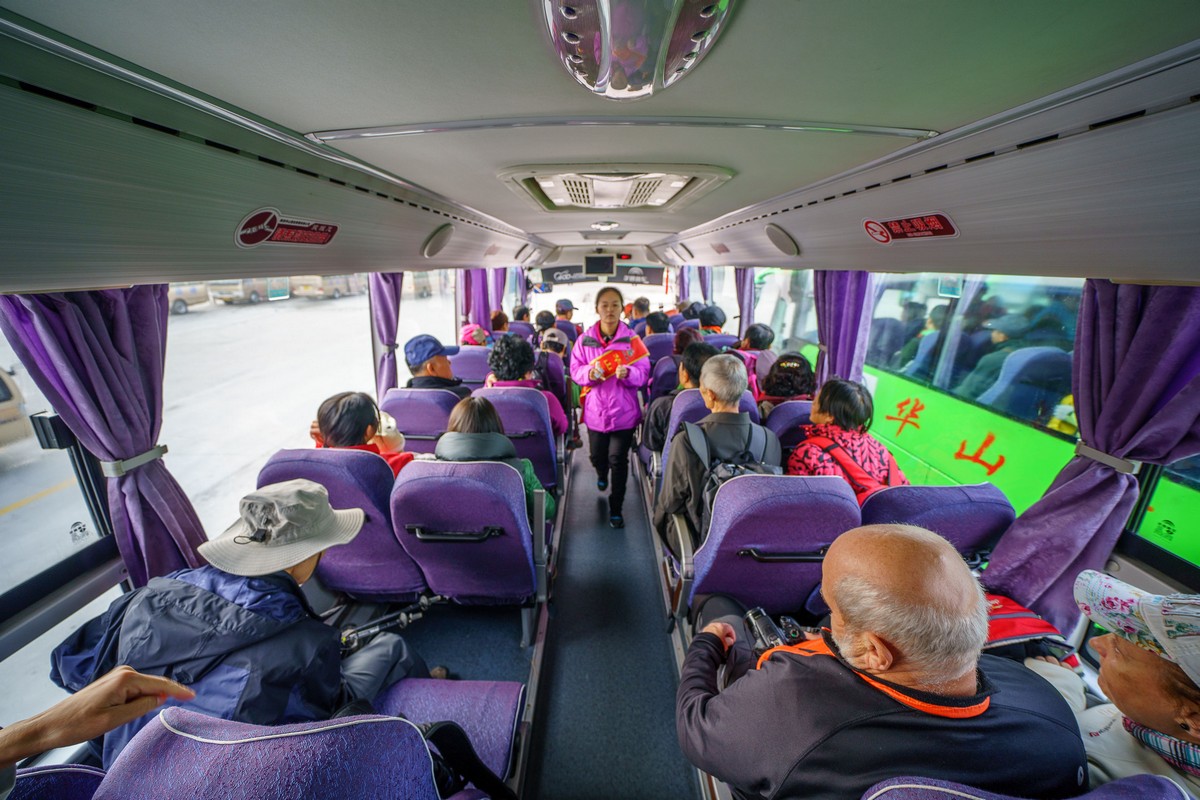 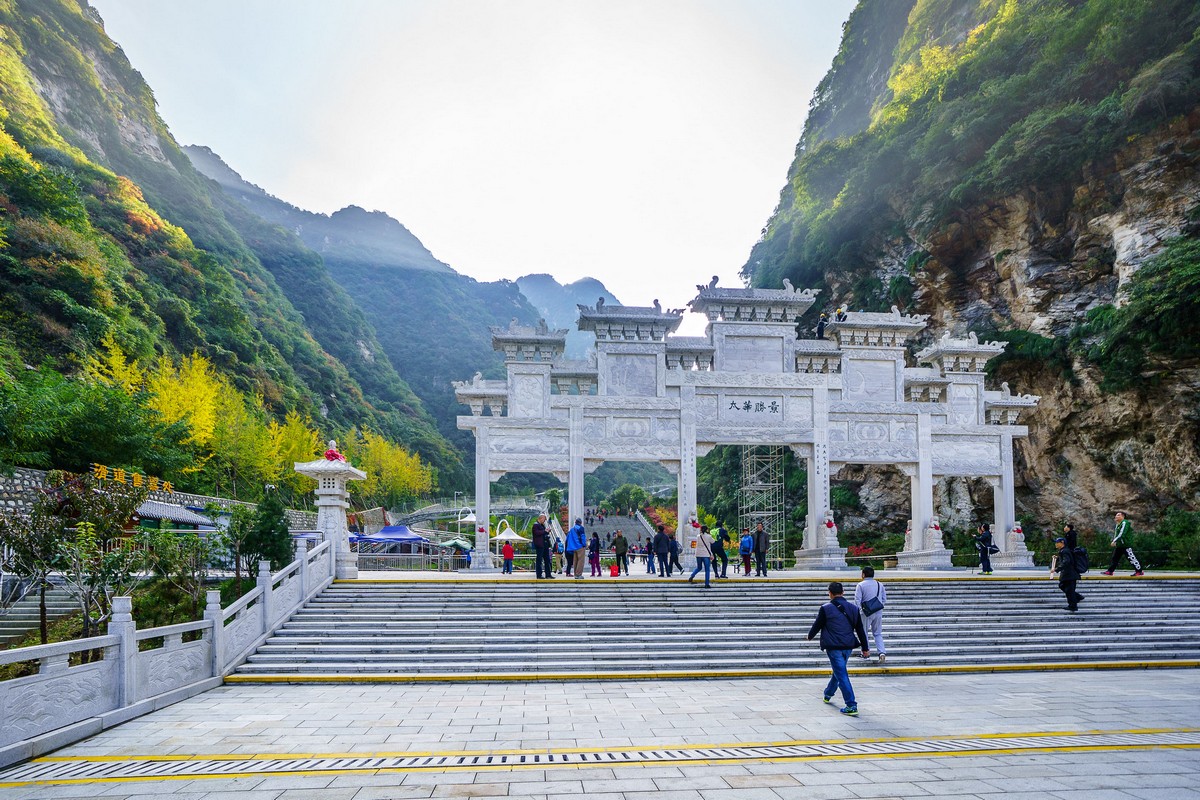 Totally lazy tourists can take this here… whatever it’s called (whose main function is to take tourists down the mountainside, not up it!): 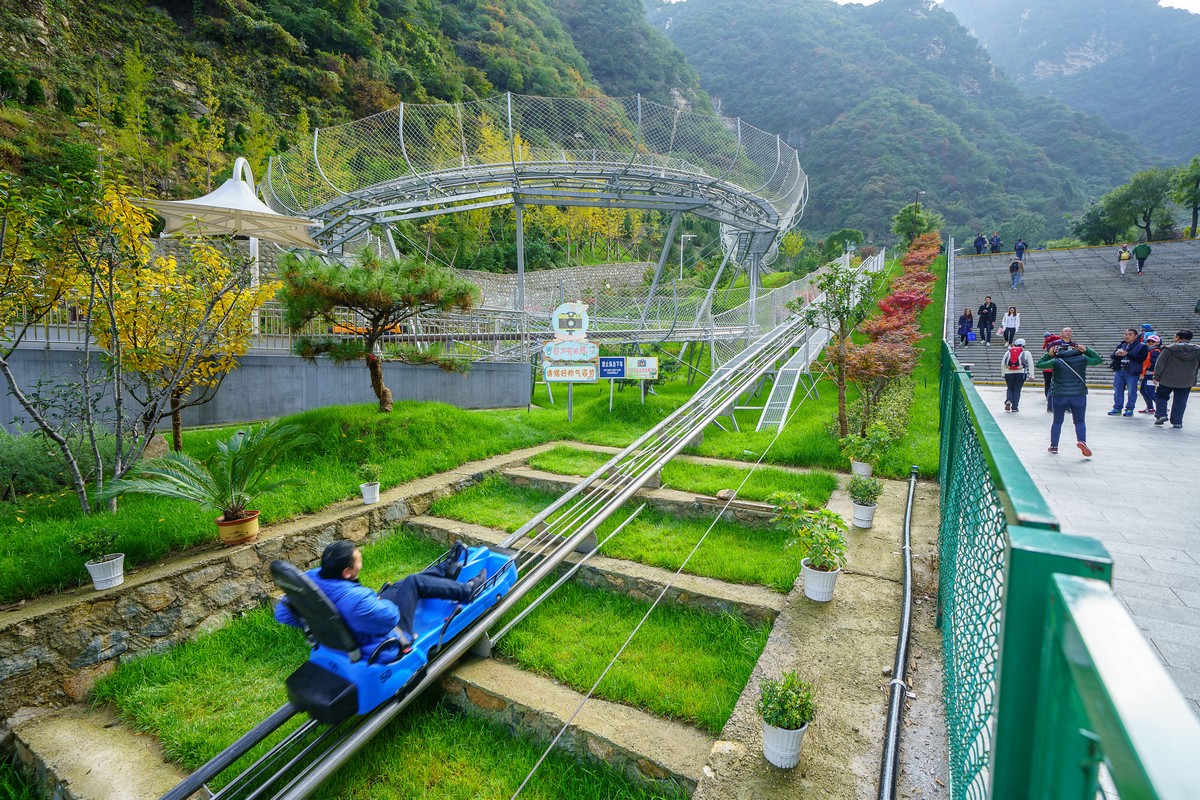 Once again – not much English on show. But up at the top there’s quite a bit so it’s quite difficult getting lost.

If you’re ever here – just make sure you take the right cable car, for there are two. You need the one that goes to the upper peak. There are three– to the west, south and east, and also a ‘mid-peak’ a little nearer. (Confused?) There’s another lower (northern) peak: it’s better to finish your route there and take the ‘northern’ funicular back down again. But you can go on foot too.

Here’s us getting aboard. Lots more folks around, as you can see:

No English here either, but at least the route’s clear: we started out on the bus winding our way through the valley (along the right edge of the map); then we took the funicular; and up top is where we’ll be walking – to and around three peaks. Another depiction of the route is given in a second map, just in case:

There are signposts everywhere; you just need to remember the route at the top (west, south, east, north). 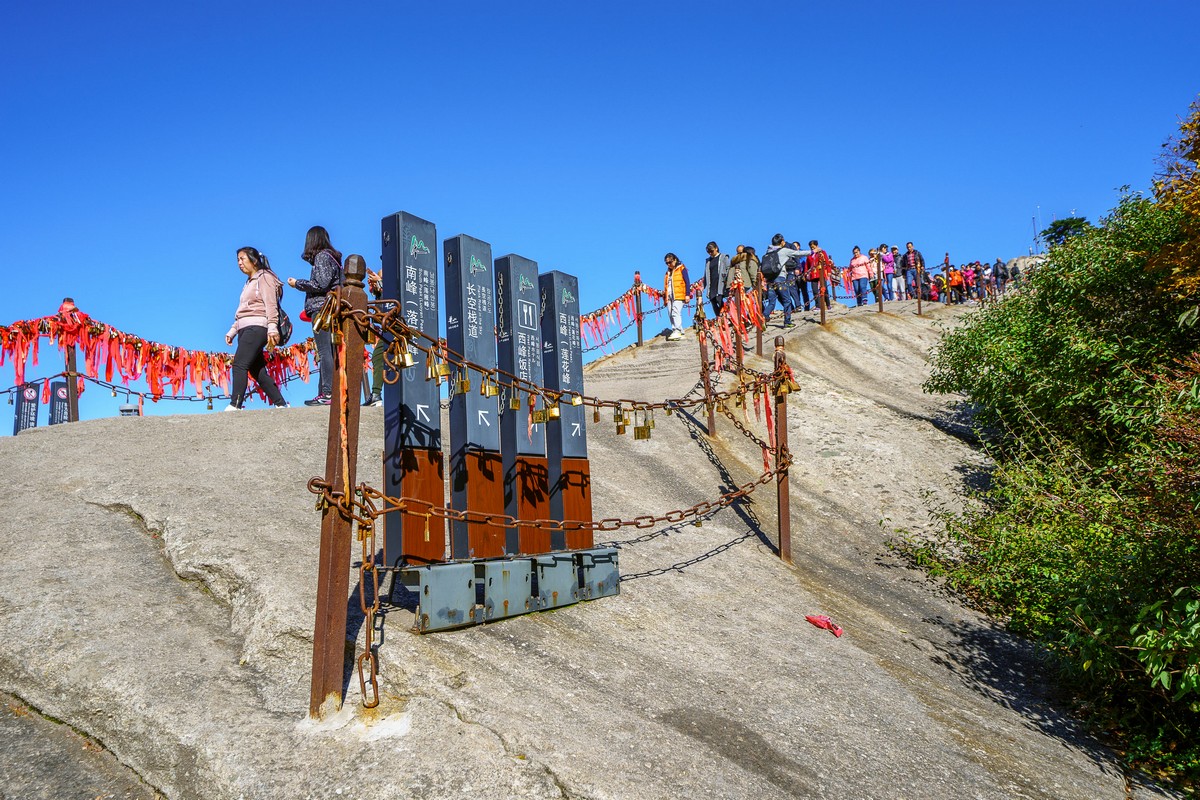 The nearest peak – the western one:

Naughty fly. I’ve enough trouble trying to get good pix here with all these tourists getting in the way. And then YOU come along! 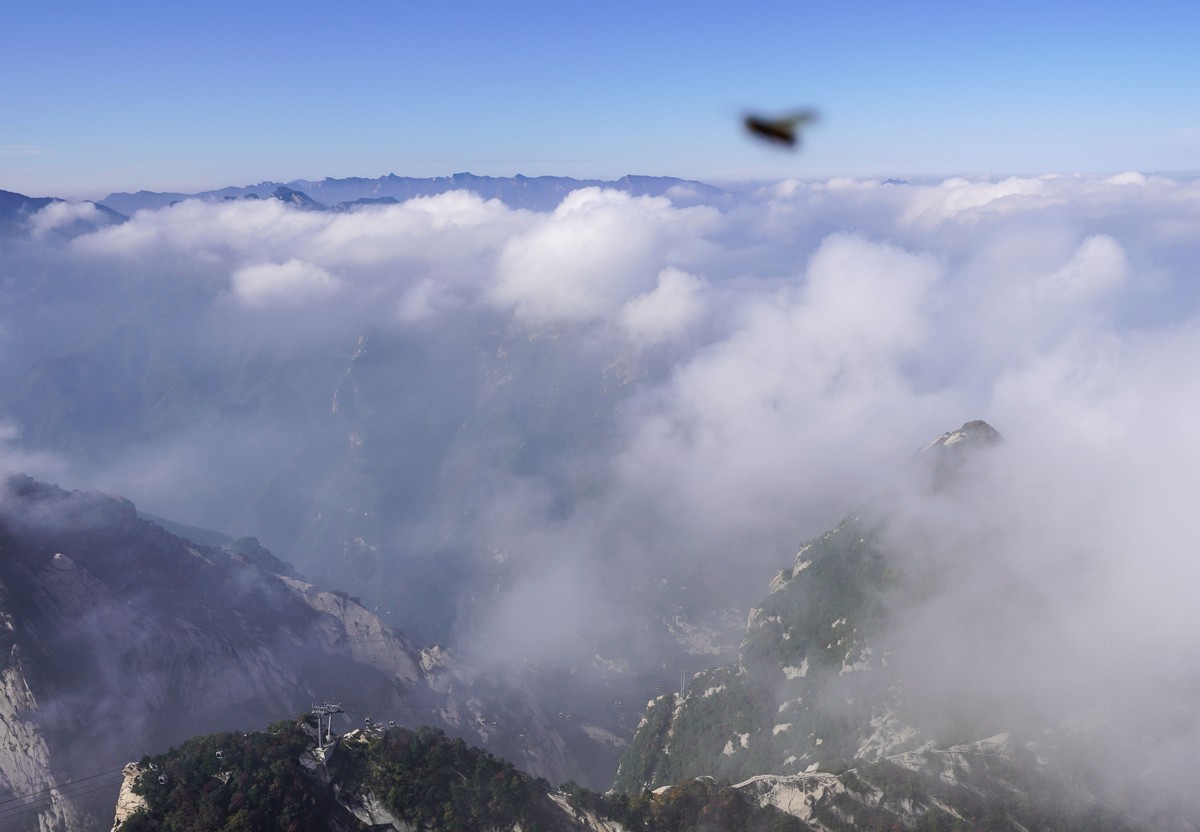 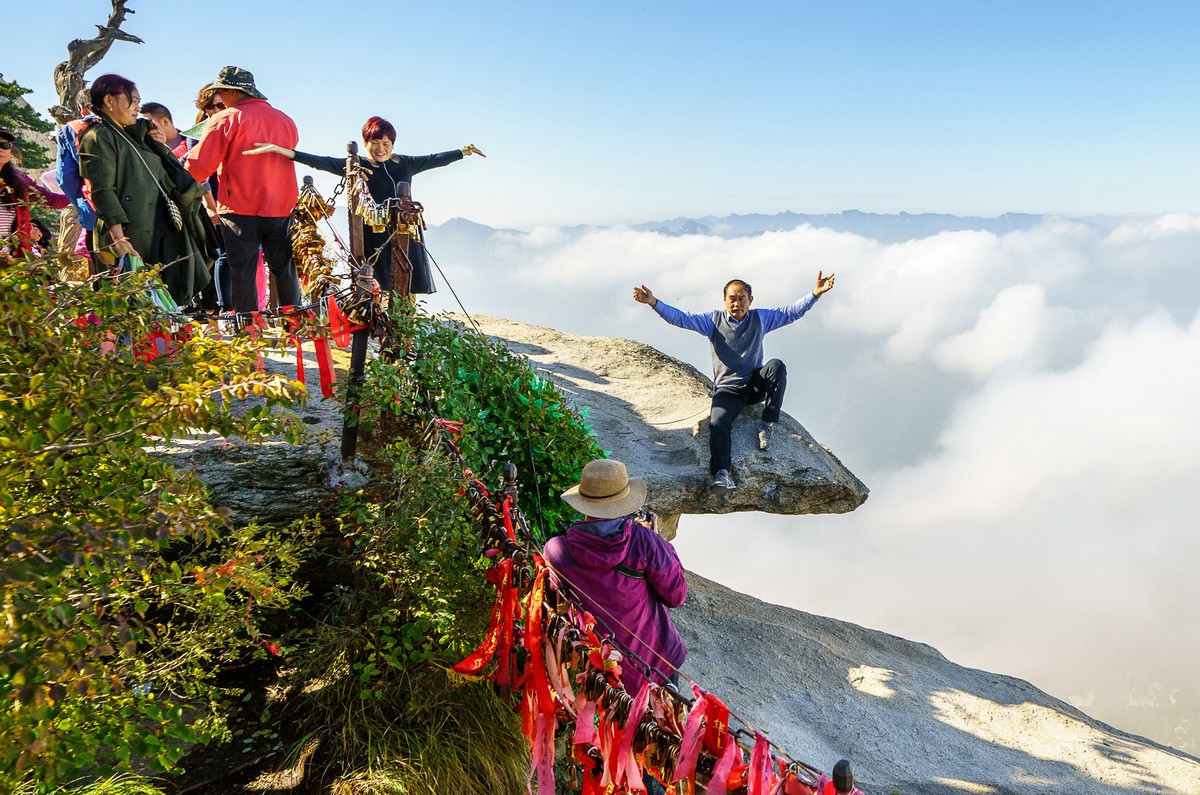 …And not free of charge! 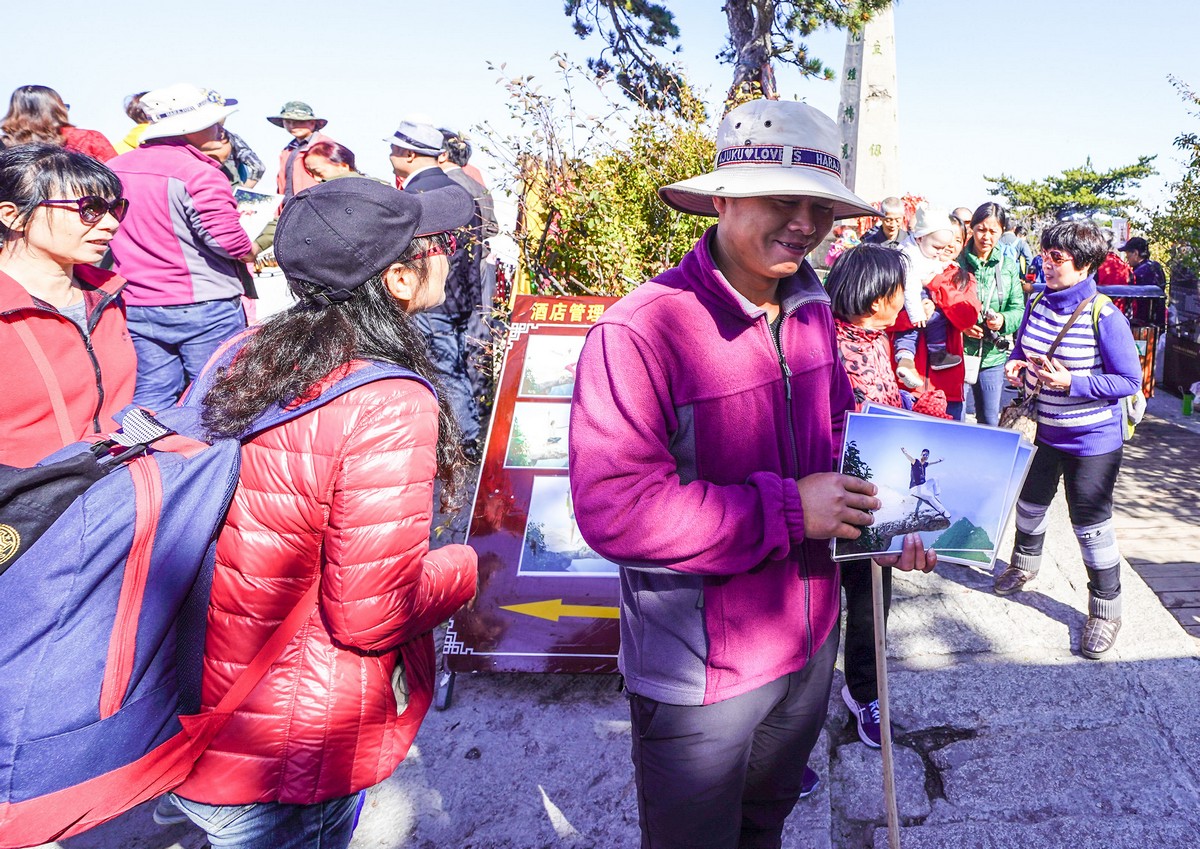 Over there – more peaks. You’re next!…

The southern peak is also very whoah in terms of the breathtaking panoramic views it affords:

But it’s not just the peaks; all the connecting paths provide much whoah-ism too: 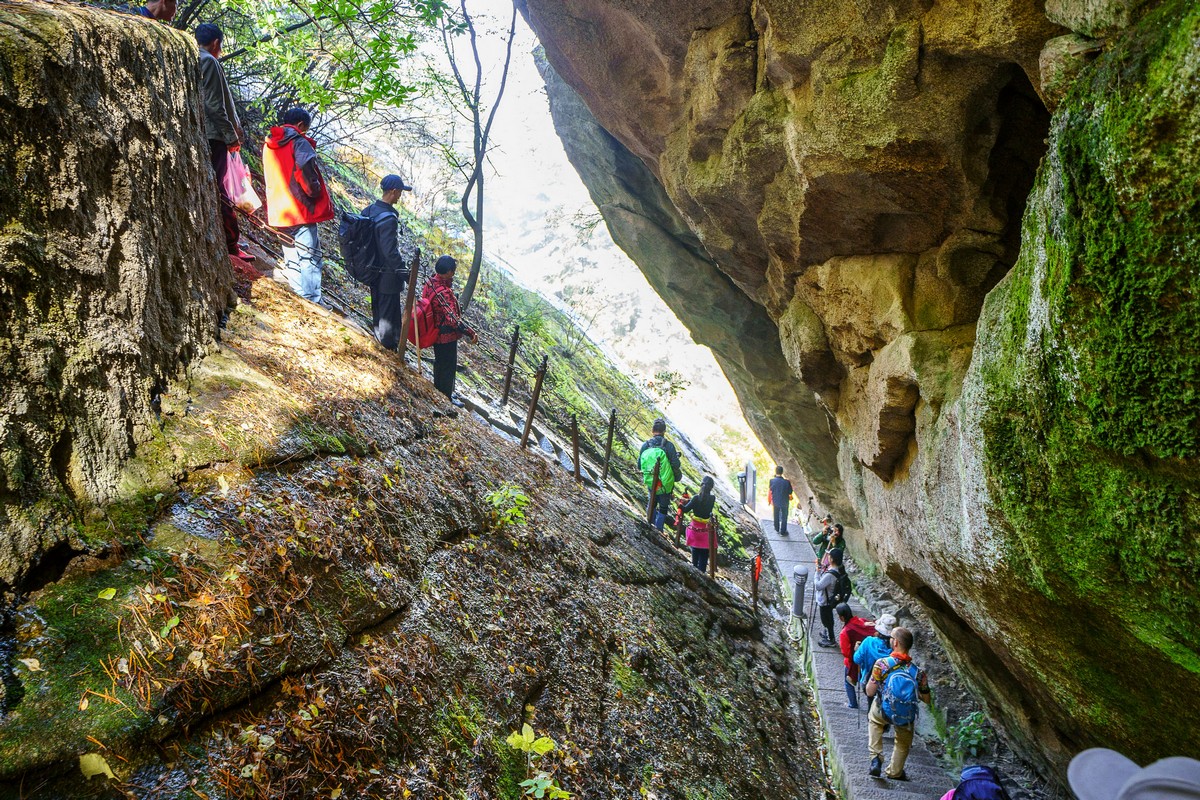 But the ultimate whoah-ness came at the eastern peak: 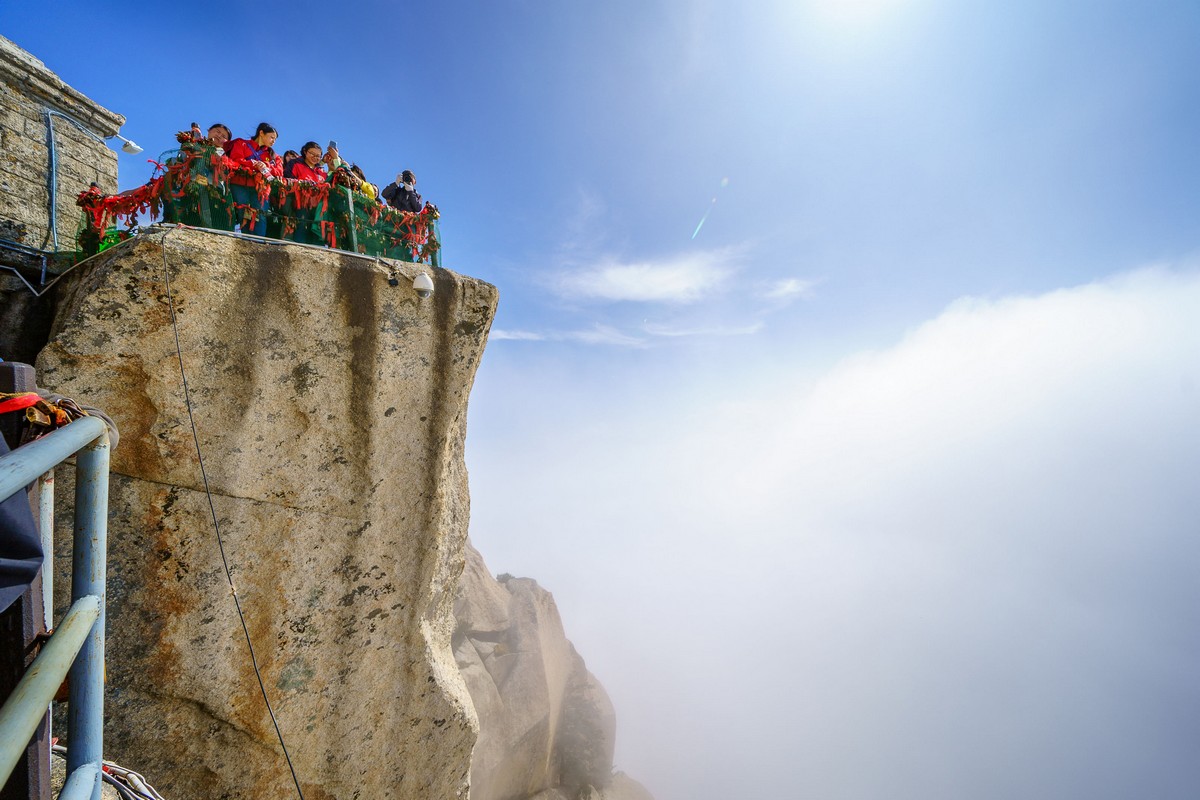 It’s here where the famously infamous plank path walk skirts the mountain face. All those folks below in a line are in a queue for the plank path, and the few folks you see further down still are those lucky ones who’ve already crossed it. Alas, those folks in line had been waiting there more than an hour, and we simply didn’t have the time to do the same. Note to self: next time take an even earlier bus – the first! And head straight to the plank path walk! Or, even better: stay at the hotel up here!

What goes up, must come down…

The central peak looks a little lackluster against the backdrop of its taller neighbors, but the views are still awesome:

Here’s the path down to the northern peak: 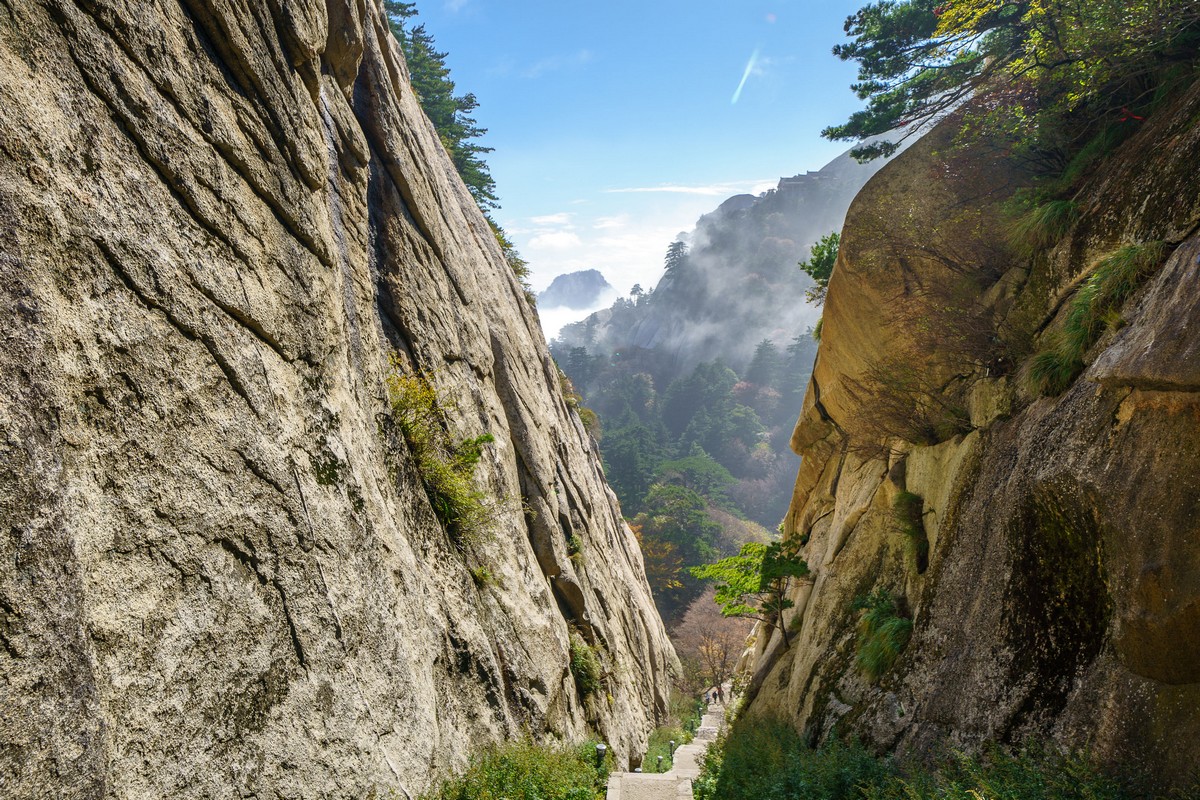 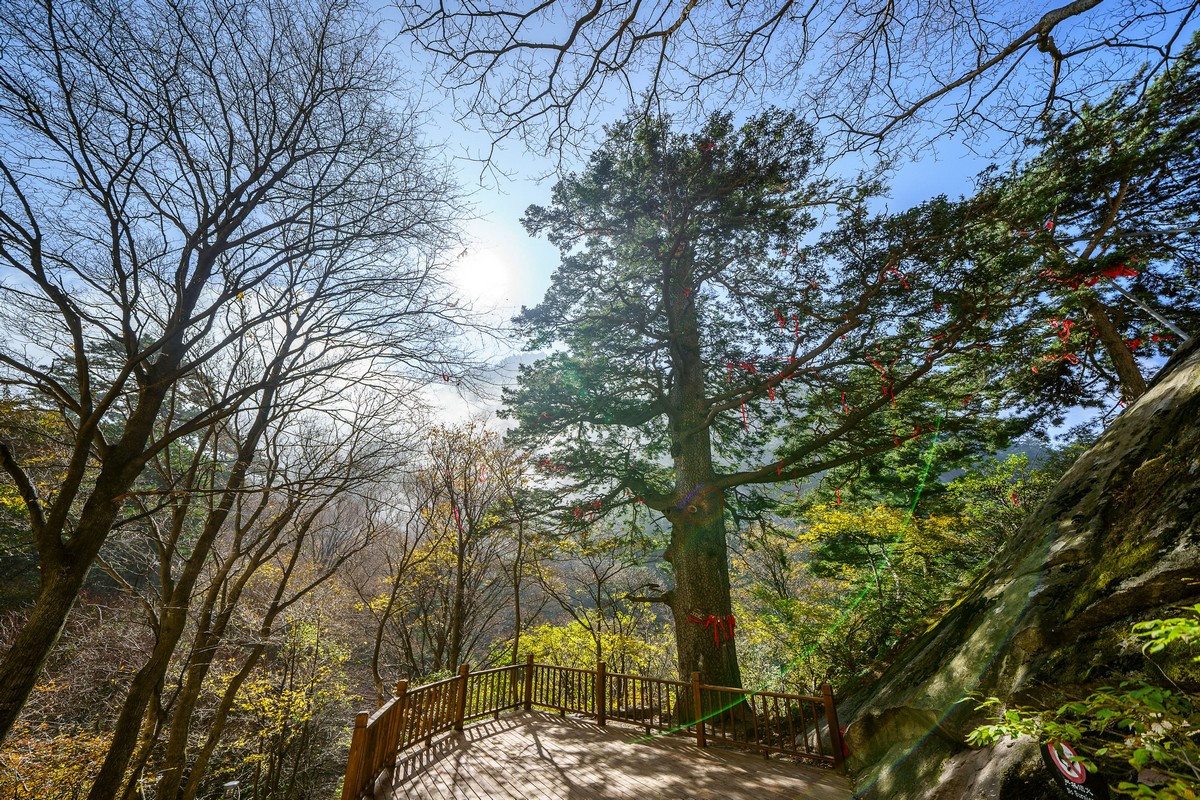 Down the steps to get back down:

And last but not least – the northern peak. 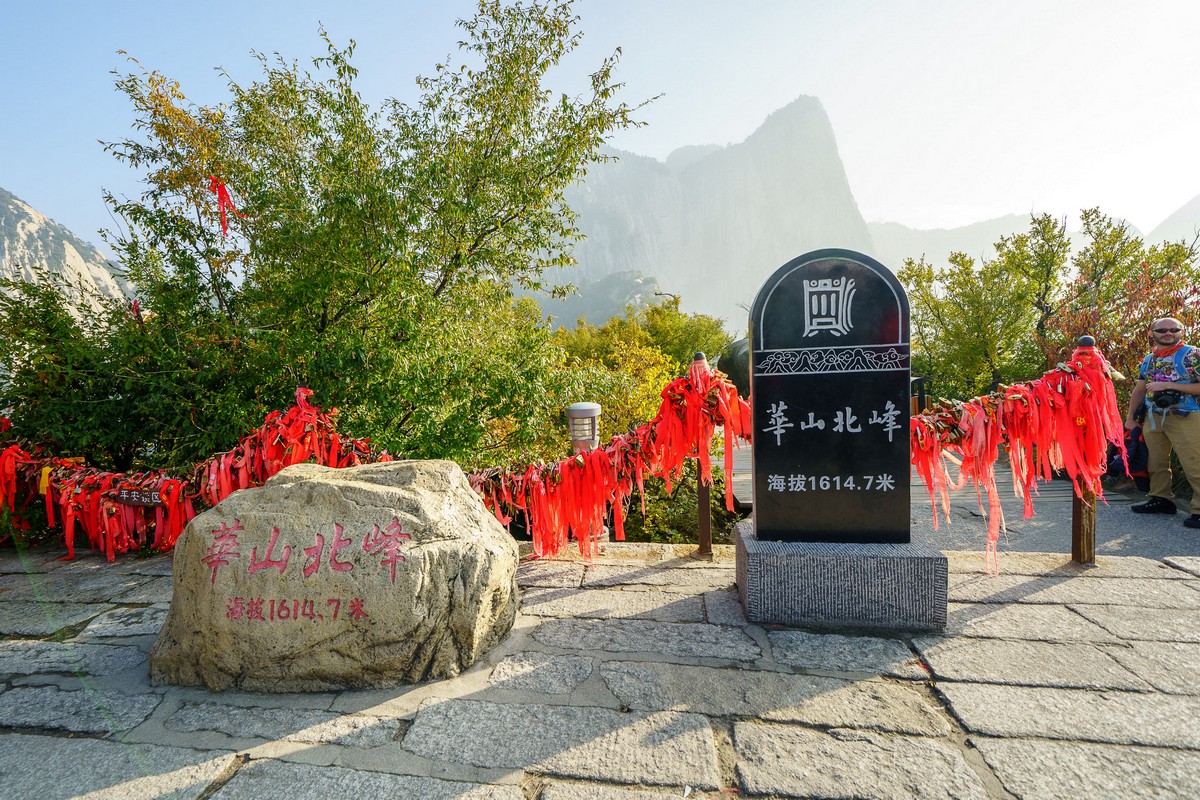 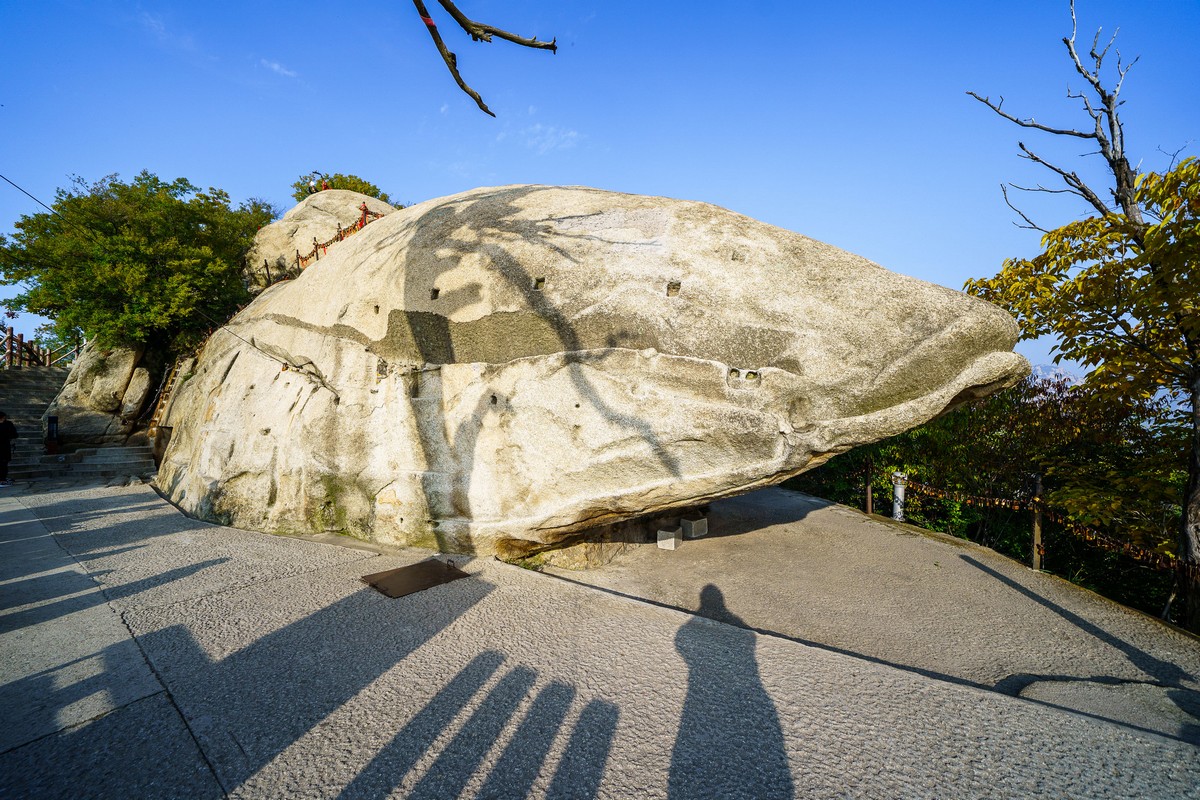 Oh no. So, folks EAT those? Yikes! I didn’t dare ask what they were. They looked like dried lizards!

We arrive back at the upper funicular station (the second, on the northern side), a quick photo op and we’re off – home!

Back to terra firma…

Here’s the staircase. The lower station of the funicular is 700m above sea level; the northern peak is 1614m above sea level: a difference of 900 meters: in three or four hours you can climb up in time for the daybreak.

But that’s for our next visit. This installment of China tourism is sadly over. Thank you for your attention, and hope your enjoyed China. But now back to work!… 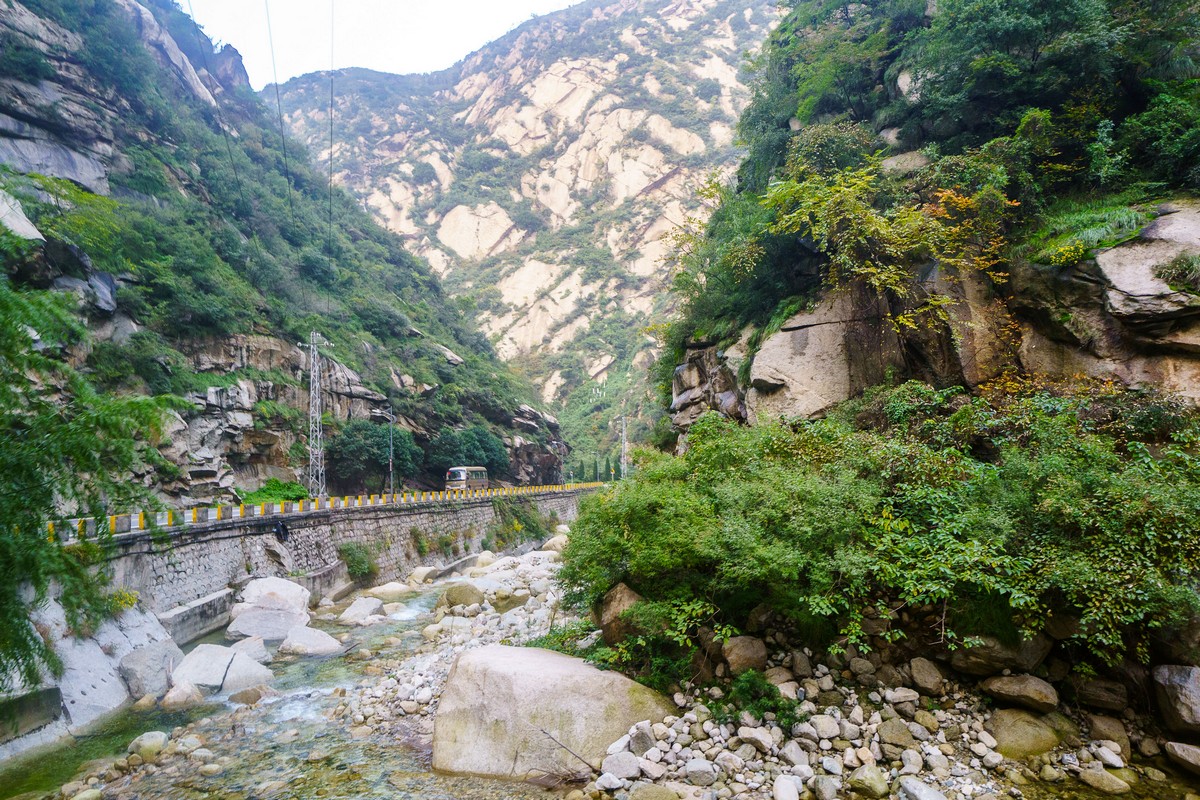