There are many reasons to visit the city of Xi’an and environs. But if those given, and exhibited by way of photos in my previous two posts (Terracotta Army and the old city walls) haven’t convinced you yet, just keep reading…

Between 10 and 15 kilometers from the city there’s a totally ace place called 华清池, aka Huaqing Pool, aka Huaqing Hot Springs. This is a real pretty spot, but at night… more about that in a bit…

Straight away at the entrance you’re knocked off your feet by the sight of some Victoria amazonica – a native plant from, as the name suggests, the Amazon River basin; yep – that Amazon: the one that runs through South America. So what they doing here? I never did get to find out, but it doesn’t really matter… in fact it adds to the mysteriously pioneering spirit of this perfectly peerless plant!

Btw, the history of this place goes back almost three millennia (!), and it has served as the location of various palaces used by various Chinese leaders throughout that long history.

So, what makes this place so special out of all the space in China – and that’s a lot of space – for palaces to be built and rebuilt and modified for 3000 years? That’s right Sherlock: the natural hot springs located here! And not just any old hot springs, but imperial hot springs!

These days the site is a class-AAAAA tourist spot, but as a museum, not thermal baths: no bathing at all. Today you just have guided tours of the place and get to know curious facts about it. For example, how an emperor had a new bath house constructed which was supplied with all the fresh hot water, while a lesser, auxiliary bathhouse – for mere ministers and generals – didn’t receive fresh water, but the second-hand H2O coming out of the emperor’s bath house!

This is the beloved consort of Emperor Xuanzong of Tang, Yang Guifei. Her story is a little muddled – it’s retold in different ways depending on the source. But what did lodge in my memory was how at first she was the wife of the emperor’s son, but the emperor seized her from his offspring and sent her to a monastery. Then, five years later, she turned up in the imperial harem as a Guifei (‘Noble Consort’) – the highest ranking position there was in the hierarchy.

Sadly we were short on time, so were unable to take the path up the mountainside. Apparently it crosses a glass bridge near the top. Oh well, we’ll have to save that till next time. 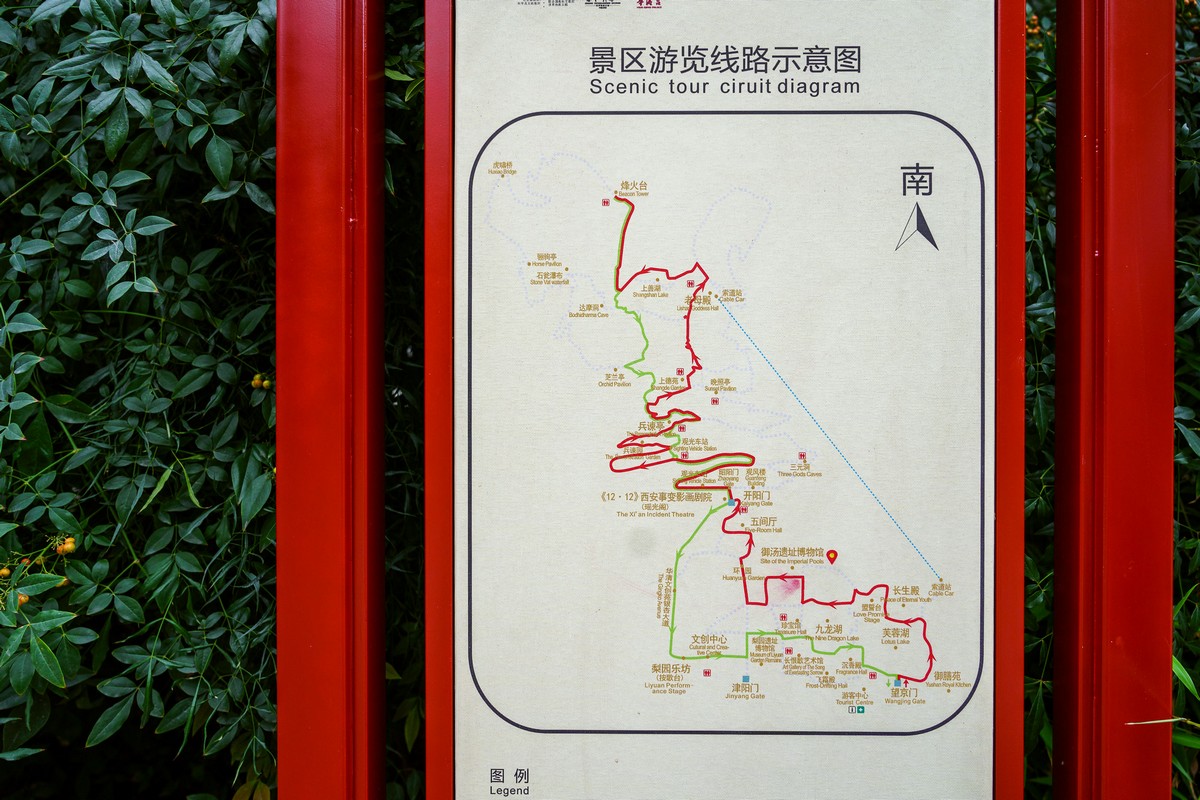 Of an evening here they put on a fantastic show – light show, music show, folk-dancing show – all in one. Must-see! Apparently! For again we couldn’t make it. It was working hours back in Europe and something needed my attention that couldn’t wait. Grrrr. Oh well; that’s another reason to get back here again…

My final dispatch from Xi’an is about the charmingly titled Giant Wild Goose Pagoda. It was originally built in the year 652 – 1365 years ago!

We weren’t told any curious tales about this Buddhist temple, so you’ll just have to settle for these pics. But if any of you, dear readers, does know anything – do let me know in the comments.

All righty. Just one more tale from the near-Xi’an side, coming up tomorrow. It’s about a mountain – a sacred one at that – just in case there are any among you who haven’t booked air tickets to the city yet :).