A week or two ago, I posed 2 + 12 questions to you on the occasion of Earth Day.

The first question was a rhetorical one: How will the world actually change as a result of global warming?

There are various hypotheses, models, projections. For sure, sea levels are rising, but not only for the obvious reason that icebergs are melting. Yes, icebergs are melting, but so is the ice – several kilometers thick! – that covers (and presses down) places like Greenland and Antarctica, and this will cause these landmasses to slowly rise up – so much so that, for example, Greenland may join up with North America! Imagine that?! They’ll have to install a new Canadian-Danish border across the new landscape!

But we’ll probably only get an answer to this question in another two or three generations. That is, if the world doesn’t suddenly opt for another stint of ice age.

Swiftly moving on to question 2…

How will nearly the whole world’s industry coming to a halt affect the growth of CO₂ in the world’s atmosphere?

We’ll get an answer to this sooner. Most curious for me is – what if it doesn’t affect it at all? But of course I hope it does. Anyway – most of the various answers to this were already discussed.

All righty. Now we turn to questions of a less global nature: about ice, rocks, mysterious circles on the earth’s surface and about animals. Lets’ go!…

Where did the water come from to make the ice on the 80th parallel on Antarctica – some 700km from the shore? Water that then freezes into fields of ice – upon which cargo planes can land:

The hint was there for the taking on the photos: mountains! 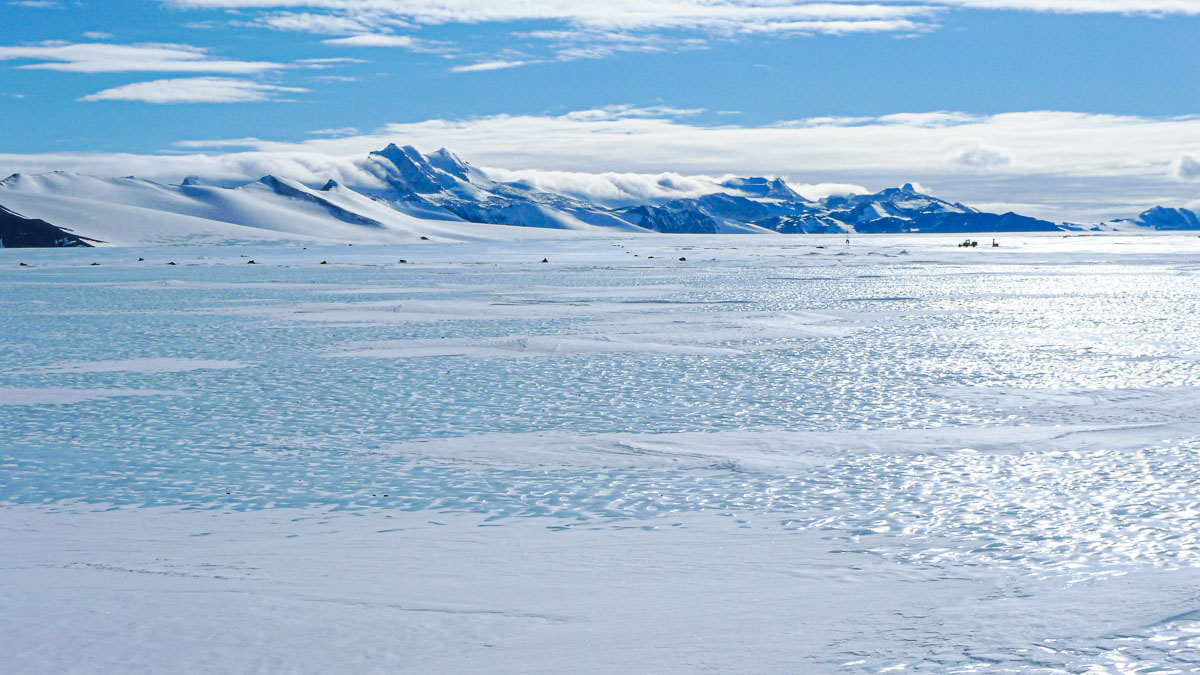 Or, to be more precise – mountain peaks. The depth of the ice here is around 800 meters (as far as I remember). Which makes what you see of the mountains their peaks. In the summer in good weather the sun heats up the rock to plus-temperatures and the snow melts – like this: 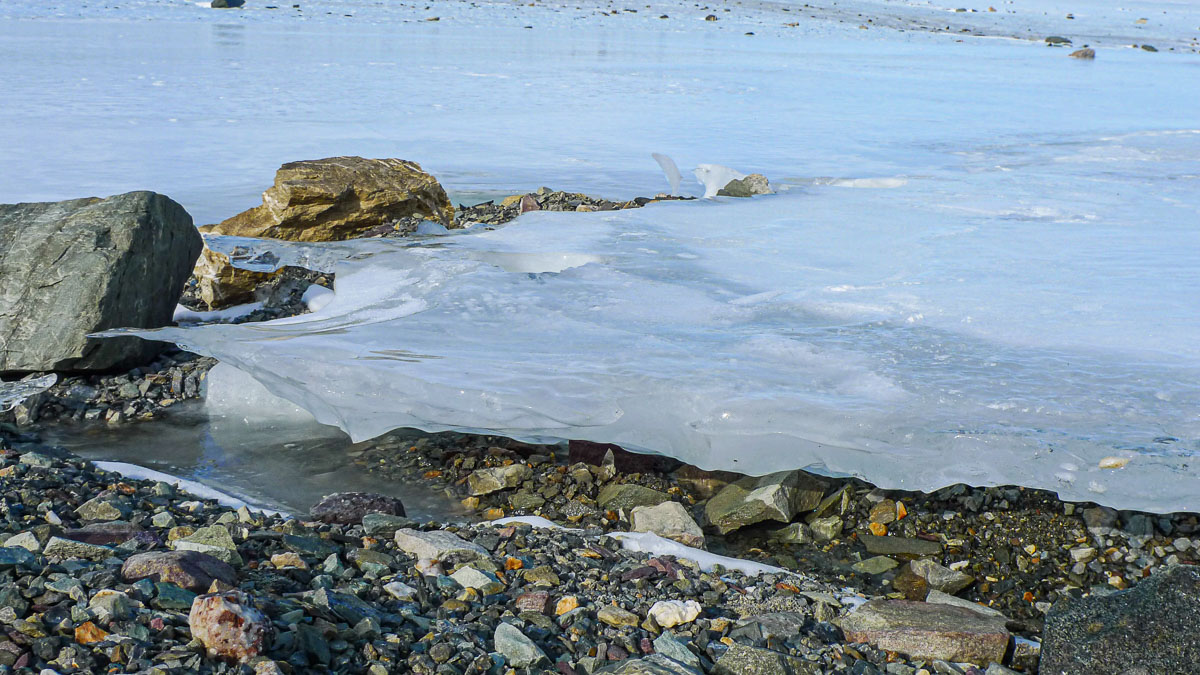 And what you get are ice ‘fields’, which crawl down from the mountain peaks and freeze on the masses of ice of yester-millennia. I won’t say ice from millions of years ago, as the ice is slowly moving in the direction of the ocean. Million-year-old ice long ago reached the shores of Antarctica, broke off from the continent, and sailed off somewhere as massive icebergs. 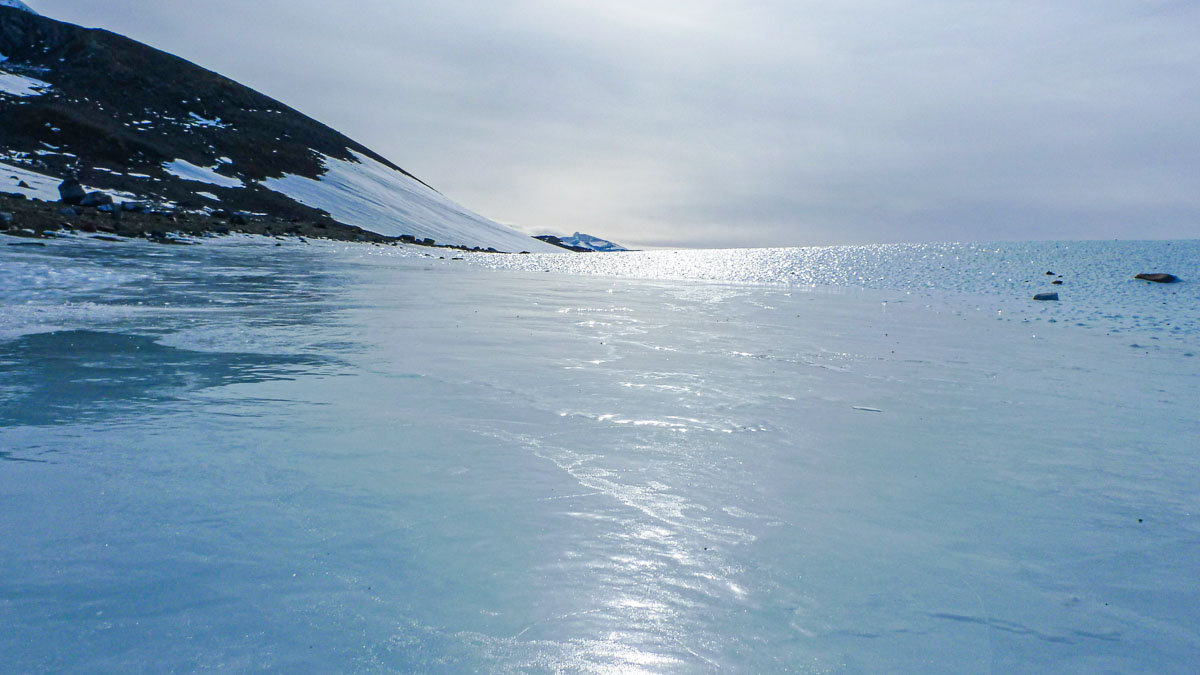 How did the mysterious stone spheroids at Moeraki (and a few other places around the world) come into existence? Ones like these:

And the answer is… – no one knows! Serious scientists remain mostly silent. The theories that do exist are… obscure. 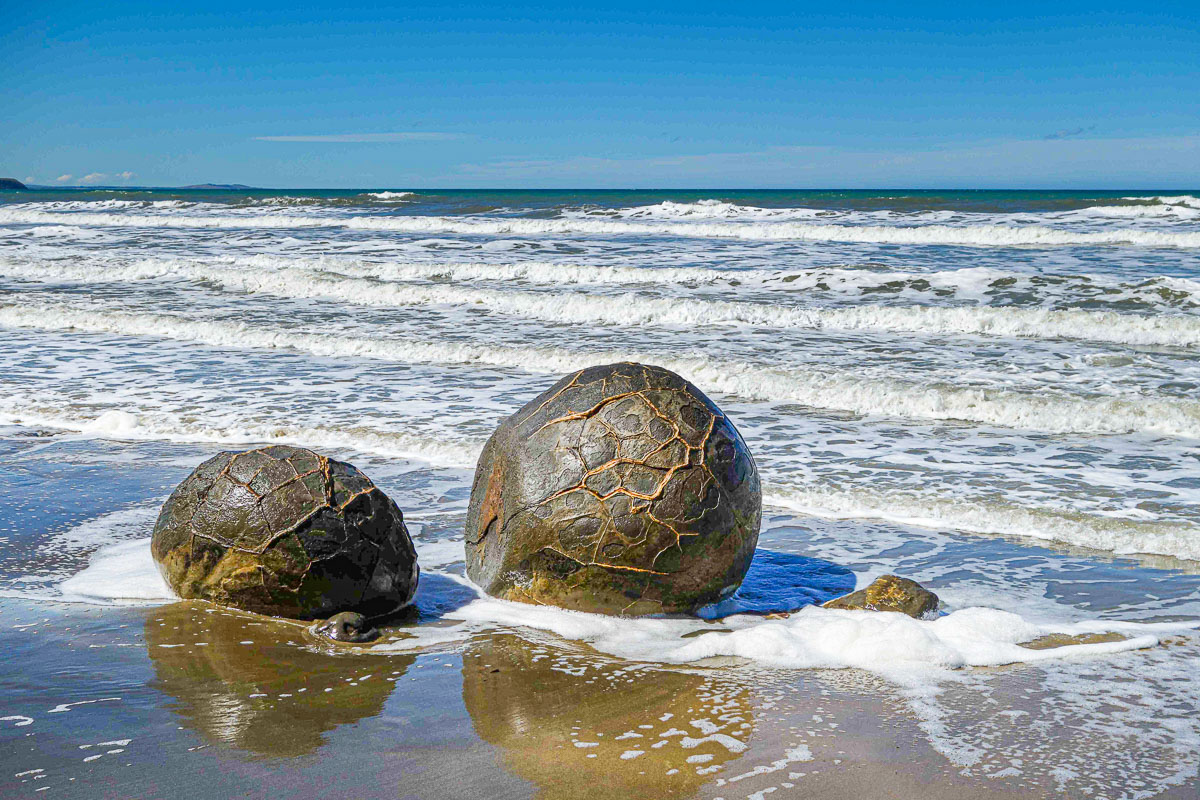 How did Uluru (Ayers Rock) and its neighboring, similar rock formations come about? And how deep do they go down beneath the surface of the earth?

Here they are; Uluru: 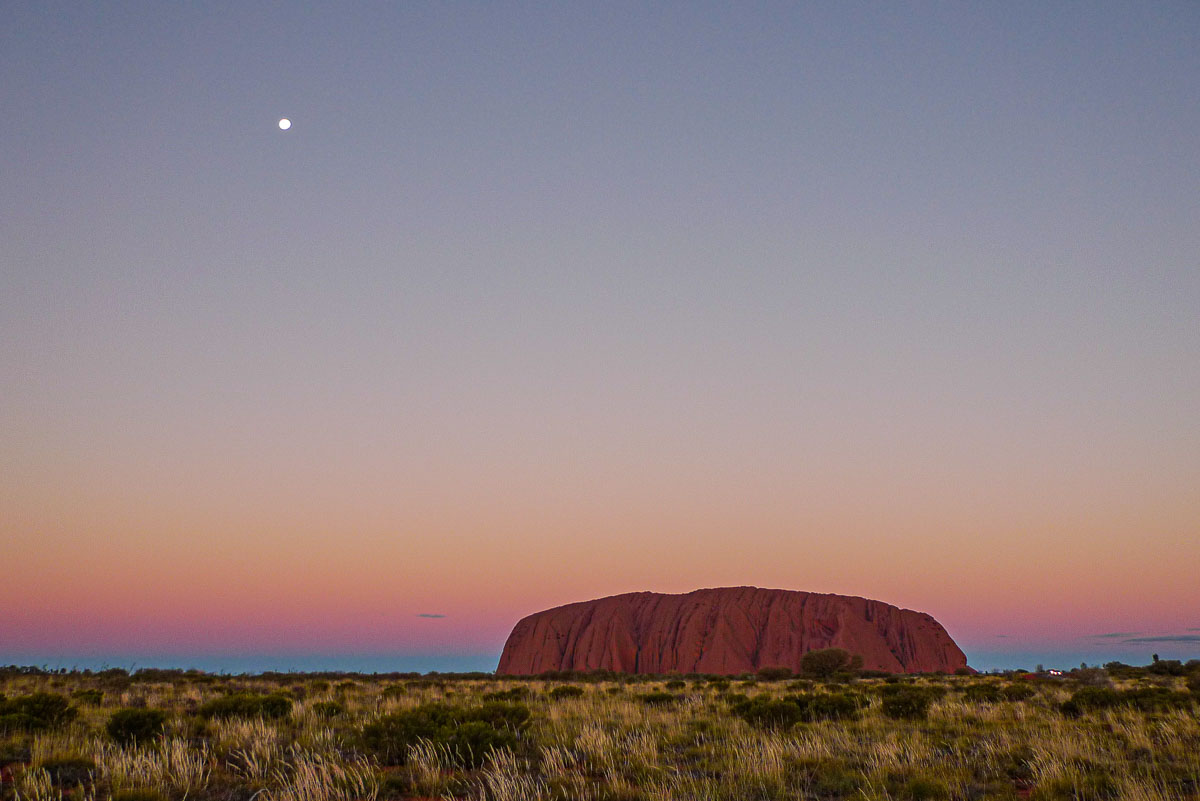 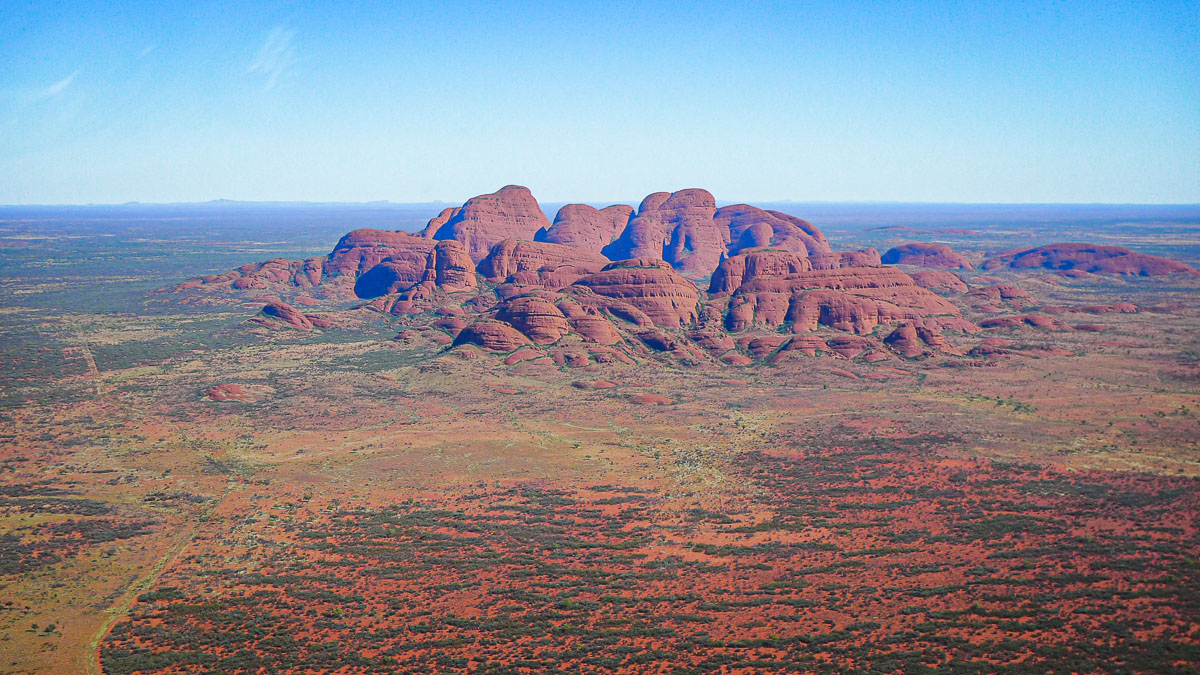 When I was here exactly 10 years ago, our guides told us their origin is unknown, but it could be that they were caused by a meteorite hitting Earth. Meanwhile Wikipedia reckons they’re the result of erosion of sedimentary rock of ancient seas, the bottom of which bulged out some 300-400 million years ago. At least, that’s according to the Russian page. The Wikipedia page in English states more modest information. I also doubt that these rocks have such origins: Uluru is a single monolith, while Kata-Tjuta is made up of compacted, smaller rocks. In my photos this is clearly visible (pics only; Russian text).

Now to how deep Uluru extends under the earth’s surface? The internet gives various answers to this: from 2.5 to six kilometers. The height of the rock above ground is ~350 meters, making it a true tip of the iceberg rock formation! 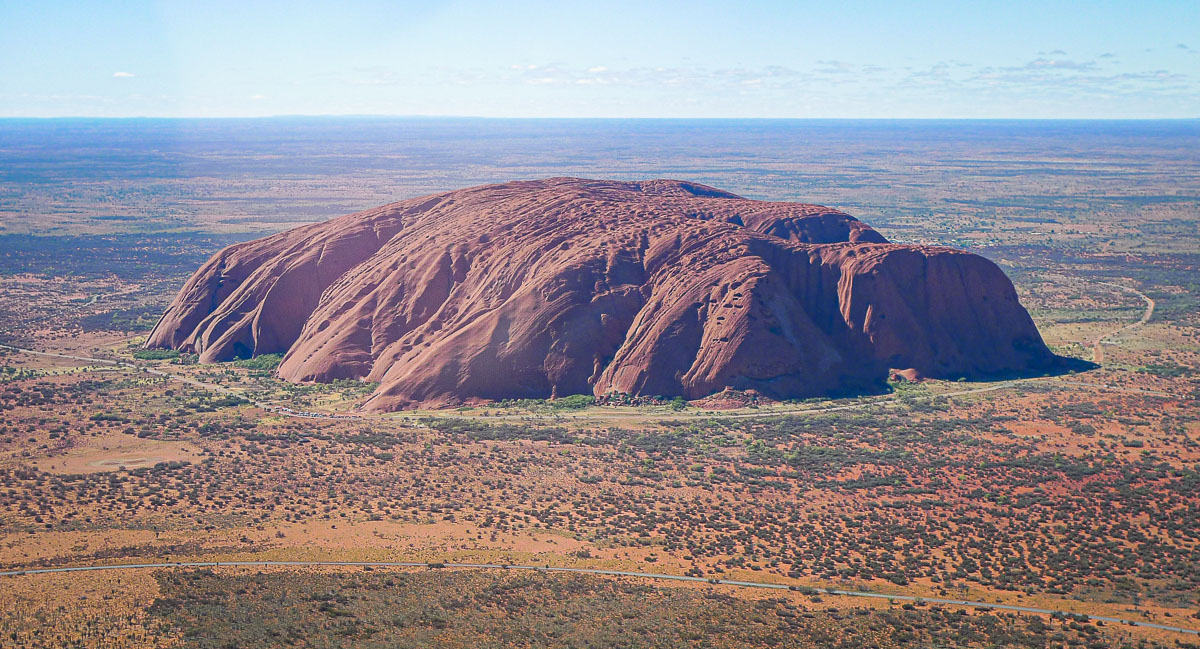 Meanwhile very little seems to be known Mount Conner, apart from that it exists and that it’s made of different minerals, but that’s about it! 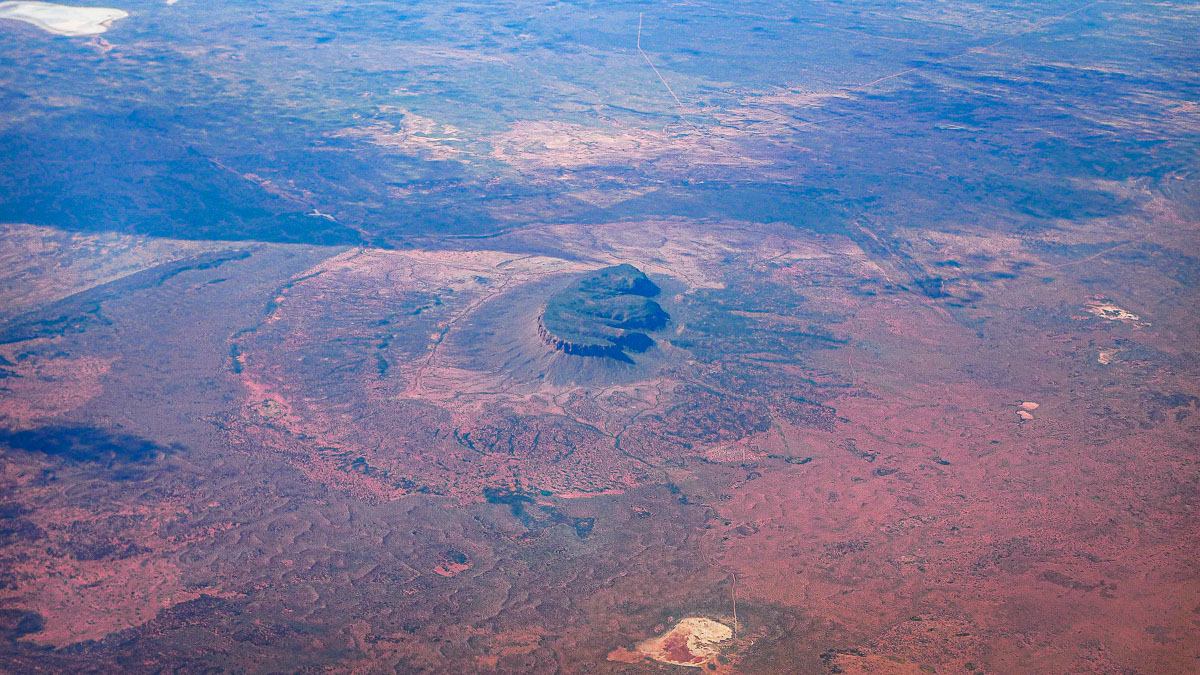 How were these here giant stone pencils formed? These:

I’ve written about this here phenomenon a few times. It’s called Benard Cells – shapes formed upon the uneven cooling of a viscous substance – here: lava. And this is the result: 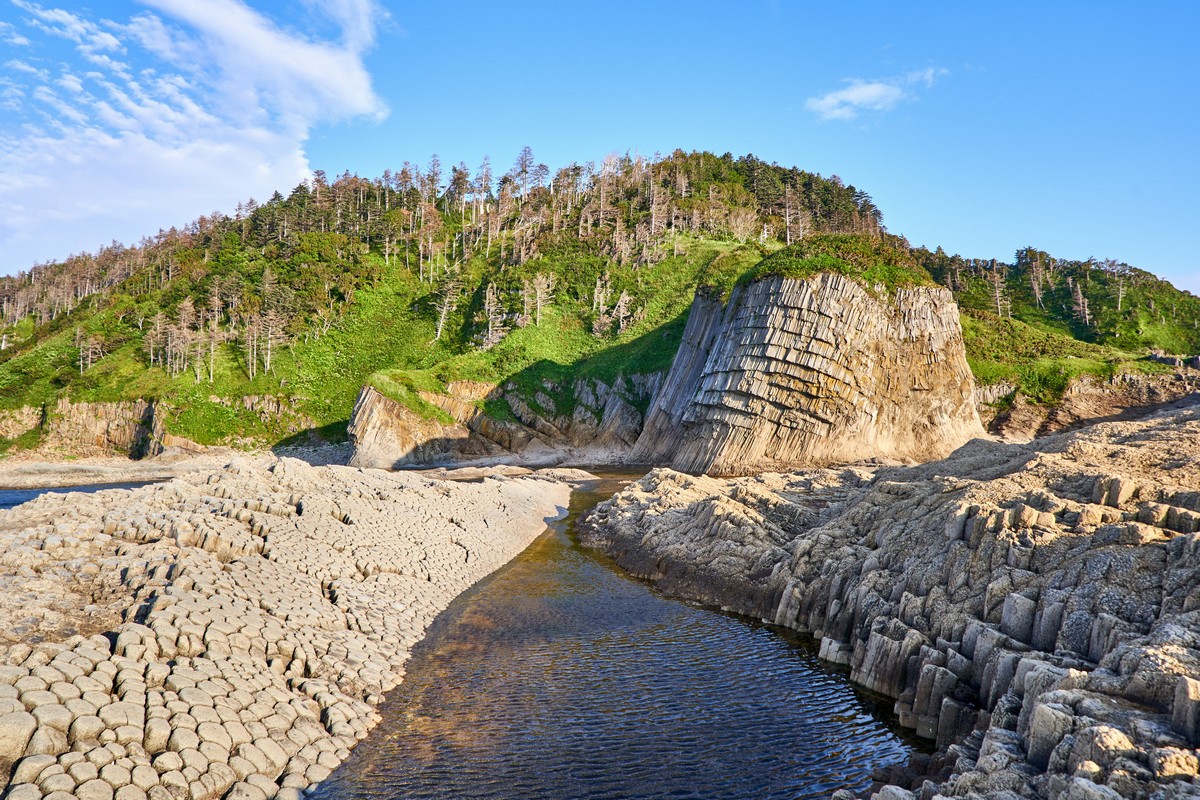 Are these outsized scattered stone LEGOs at Giant’s Playground a completely natural phenomenon?

Sorry, but I don’t believe the theory that these blocks were placed specially by aliens. If they were, surely they’d be positioned a bit tidier, not like this:

Which leaves only two scenarios of how these formations came to be. First: once upon a time long ago giants did once roam here, and this was the playground of their offspring. The only (!) problem with this theory: there are no other signs of such giants at all: no fossils, nothing.

Second: these rocks are another example of the effect of many millions of years of natural erosion. First an earthquake breaks up the large blocks of rock into smaller rocks, then the wind and rain gets to work and carries on that work ad infinitum. Btw: the internet states that these rocks were formed some 160-180 million years ago.

If the Kondyor Massif is natural, how did it come about – and why is there only one of them on the whole planet?
(the photos below are from Yandex and Google Maps)

The internet states that the origins are still a bit mysterious, but, that, for example, it “is the result of a little-understood upward surge of crystallized molten magma called an ‘intrusion’. This volcanic rock pushed up through 5,000 miles of mantle a billion years or so ago, but instead of exploding outwards, it crept to the surface. Then the softer middle eroded, leaving a formation that mimics a volcano.”

But if it was so simple, why is the object the only one on the planet, while, for example, there are thousands of volcanoes? Well I don’t know the answer to that; neither does the internet by the looks of it.

What are some of the different theories about the origin of the Richat Structure, aka the Eye of the Sahara?

Wikipedia cites two: “The circular distribution of ridges and valleys is explained as the formation of cuestas by the differential erosion of alternating hard and soft rock layers uplifted as a dome by an underlying alkaline igneous complex of Cretaceous age” and: “Carbonates within the silica-rich megabreccias were created by low-temperature hydrothermal waters”.

But, again – why is there only one of its kind? Also again – this remains a mystery.

How were the red arches of Utah formed – particularly Delicate Arch?

Actually there’s no great secret to this one. Dense sedimentary rock was fairly smashed to bits by an earthquake. Then the wind and the rain eroded the rocks round their edges over millions of years. The extraordinary shapes come from spiraling wind, which with the addition of sand blown up from the ground, carves out the crazy shapes. Here, for example is a new natural masterpiece in the process of being formed. In thousands of years it’ll be a pretty arch: 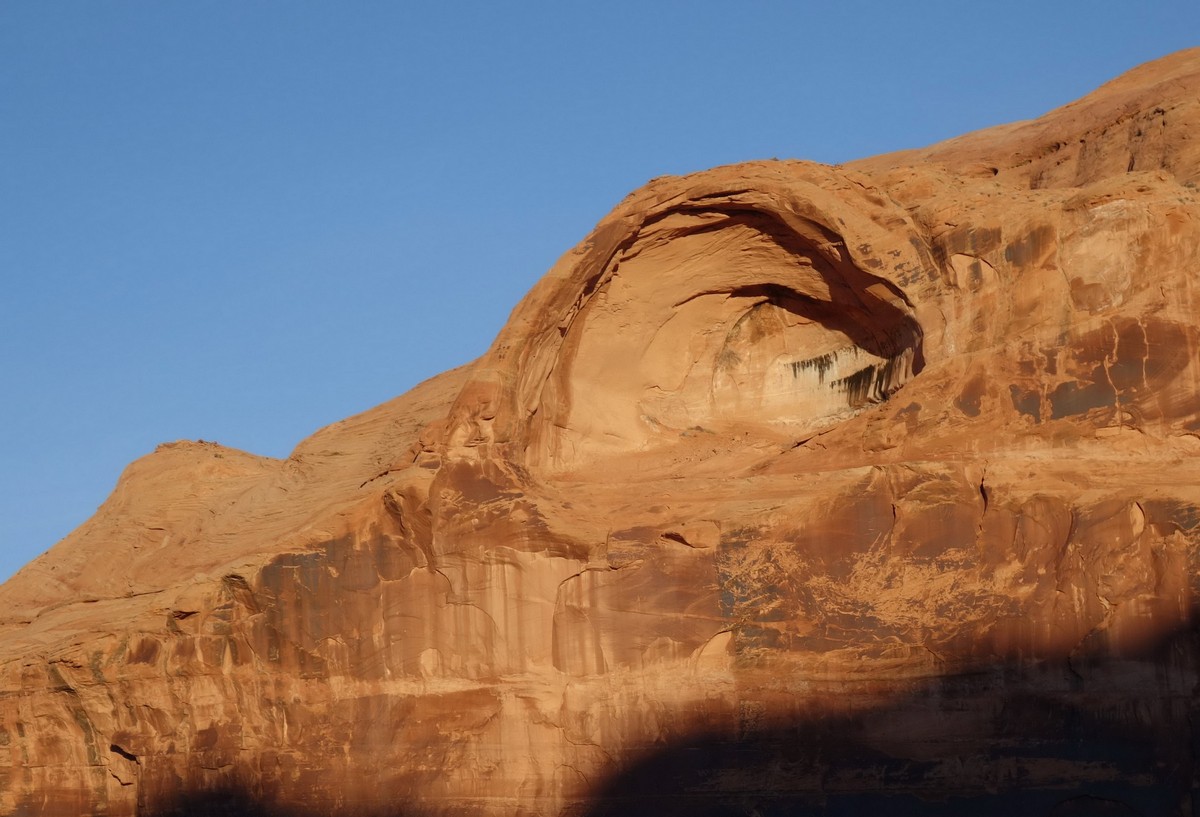 I think this pic here shows how an arch is eventually formed out of a ‘bump’ of rock atop the main mass: 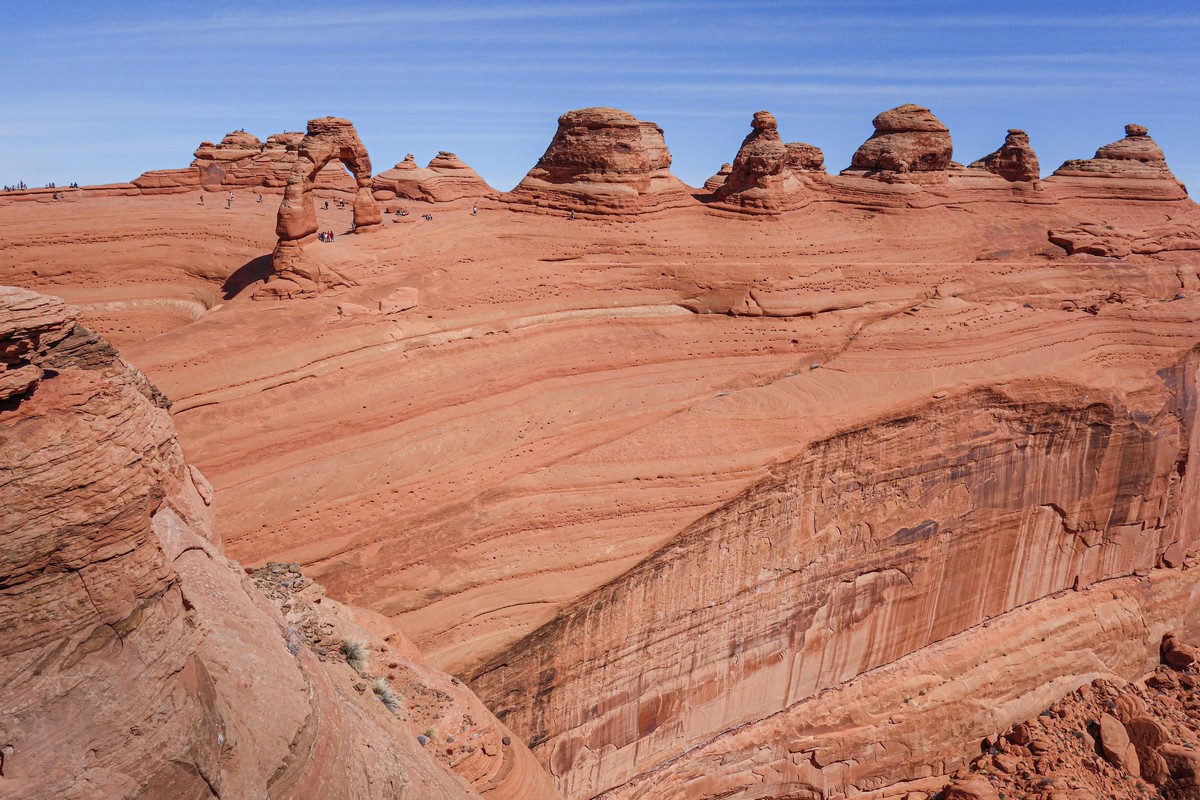 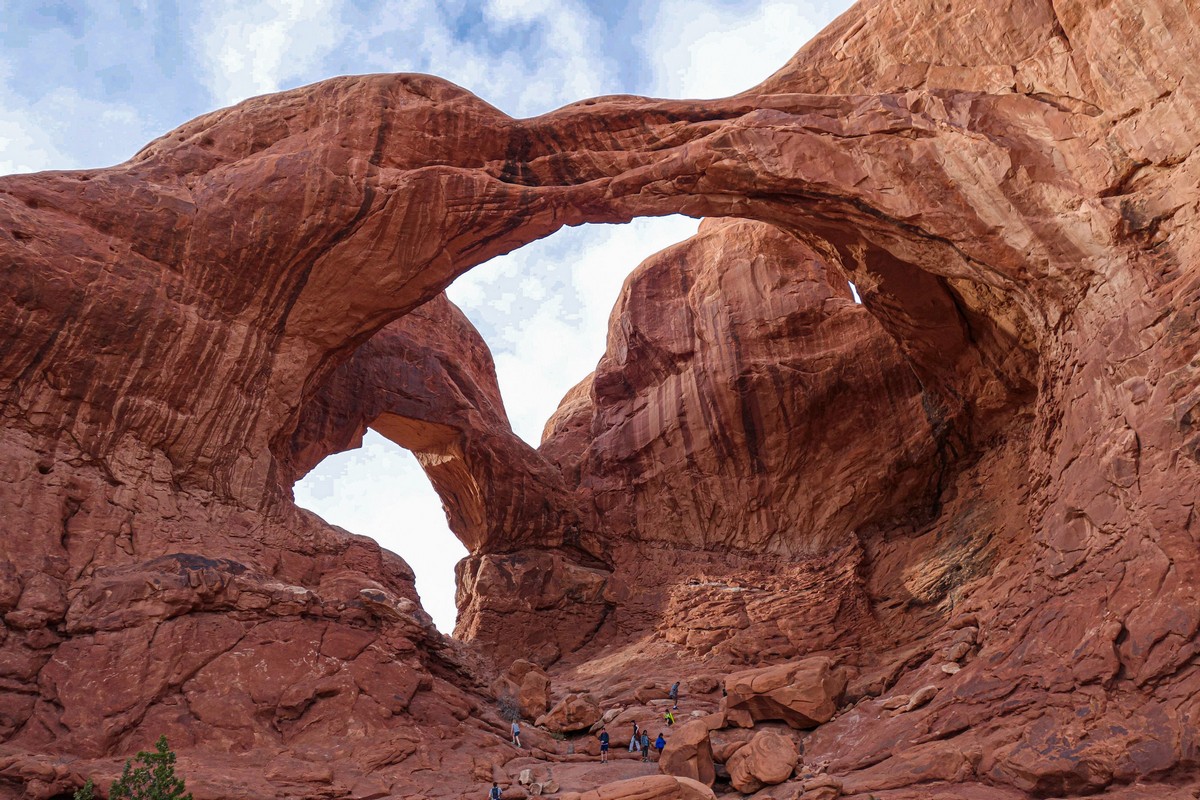 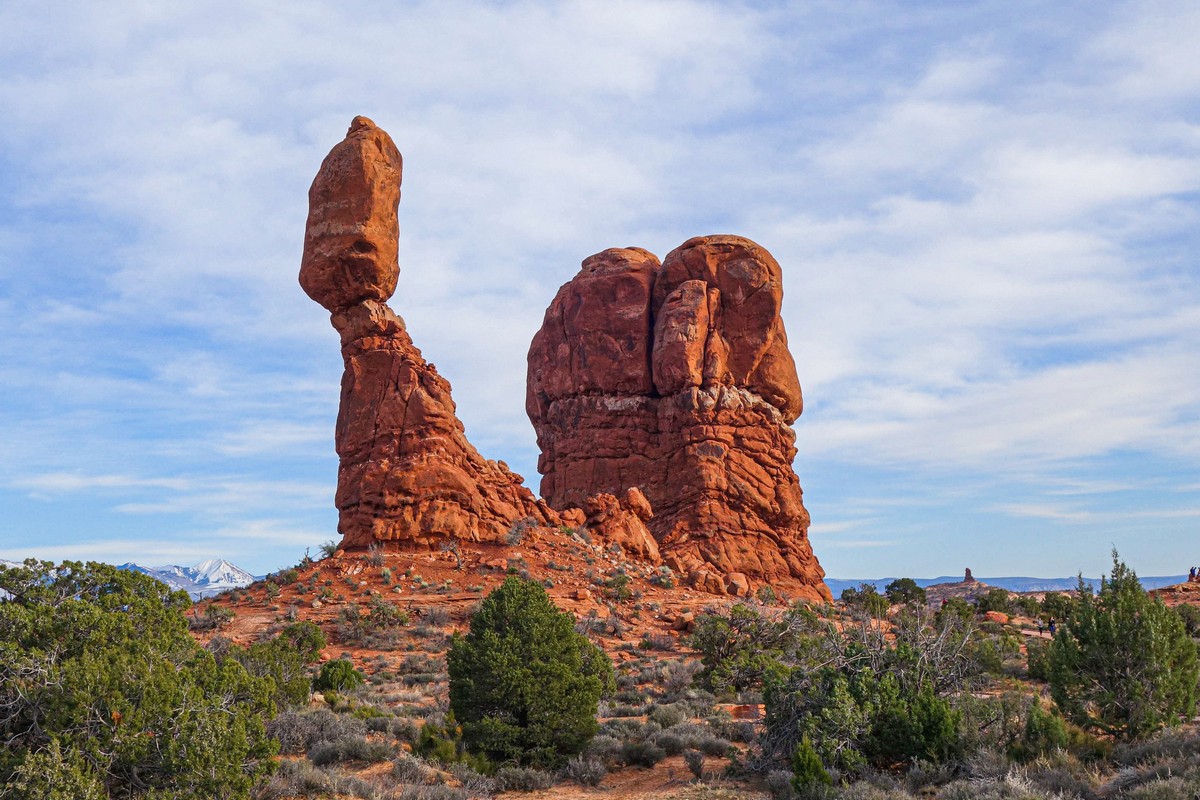 Now we cross over to the animal world. First question:…

How is a certain little fish able to get to the top of this 100+meter waterfall to spawn? Once again: the fish hatches out of ovum up at the top, falls down that there waterfall, ends up out in the ocean, but when it’s its turn to spawn it gets back up to the top of the waterfall! 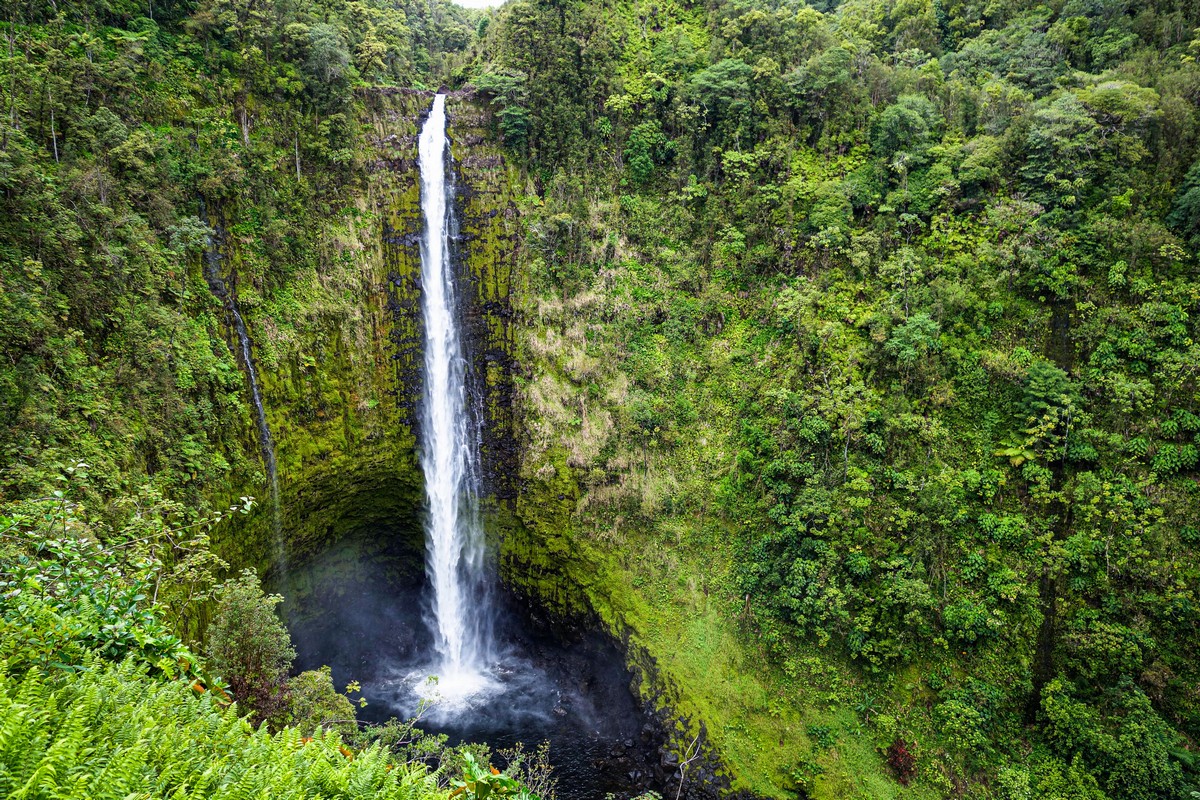 Well, the Hawaiian freshwater goby is able to crawl up vertical wet rocks behind waterfalls using the suction disks on their ventral sides – against the falling water. Oh my goby! 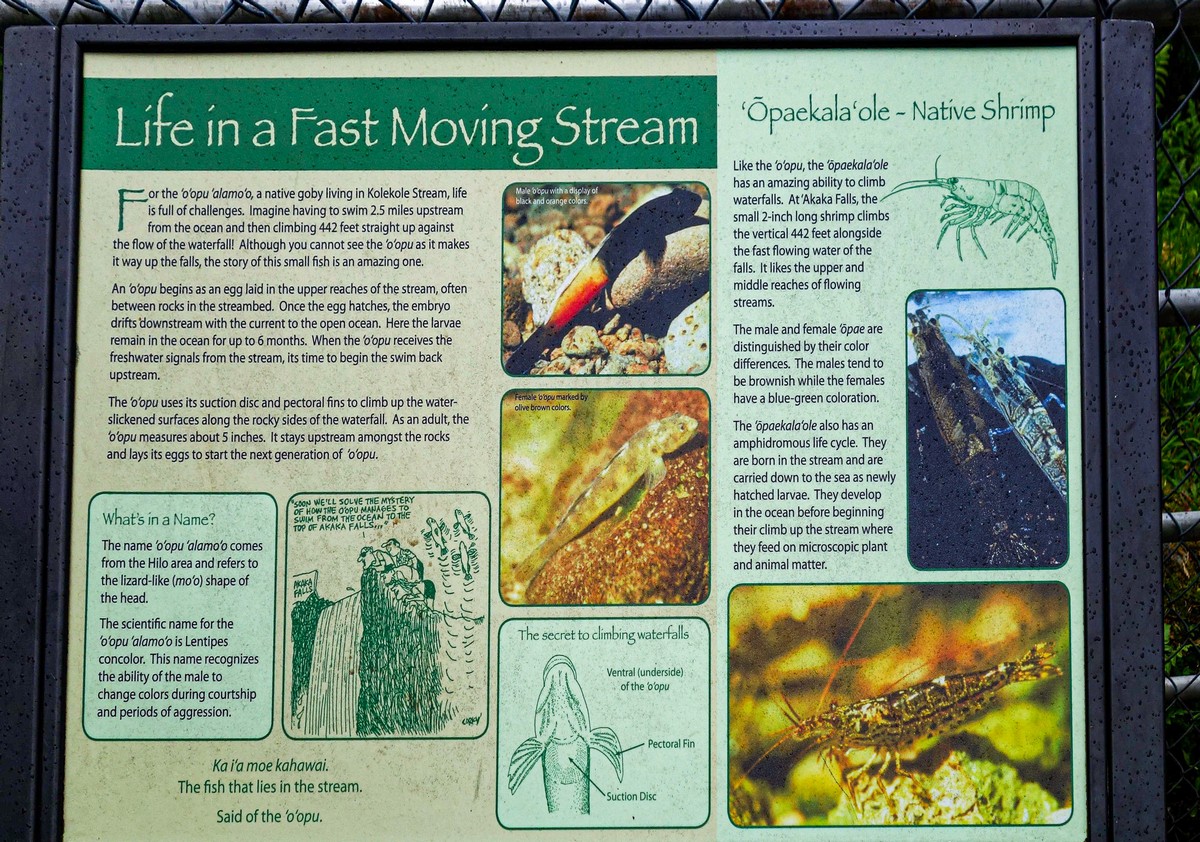 It crawls up behind this waterfall! ->

Next up – How is it that two endemic species – the Galapagos and Aldabra giant tortoises – turn out to be directly related to each other, when they’re on opposite sides of the planet? 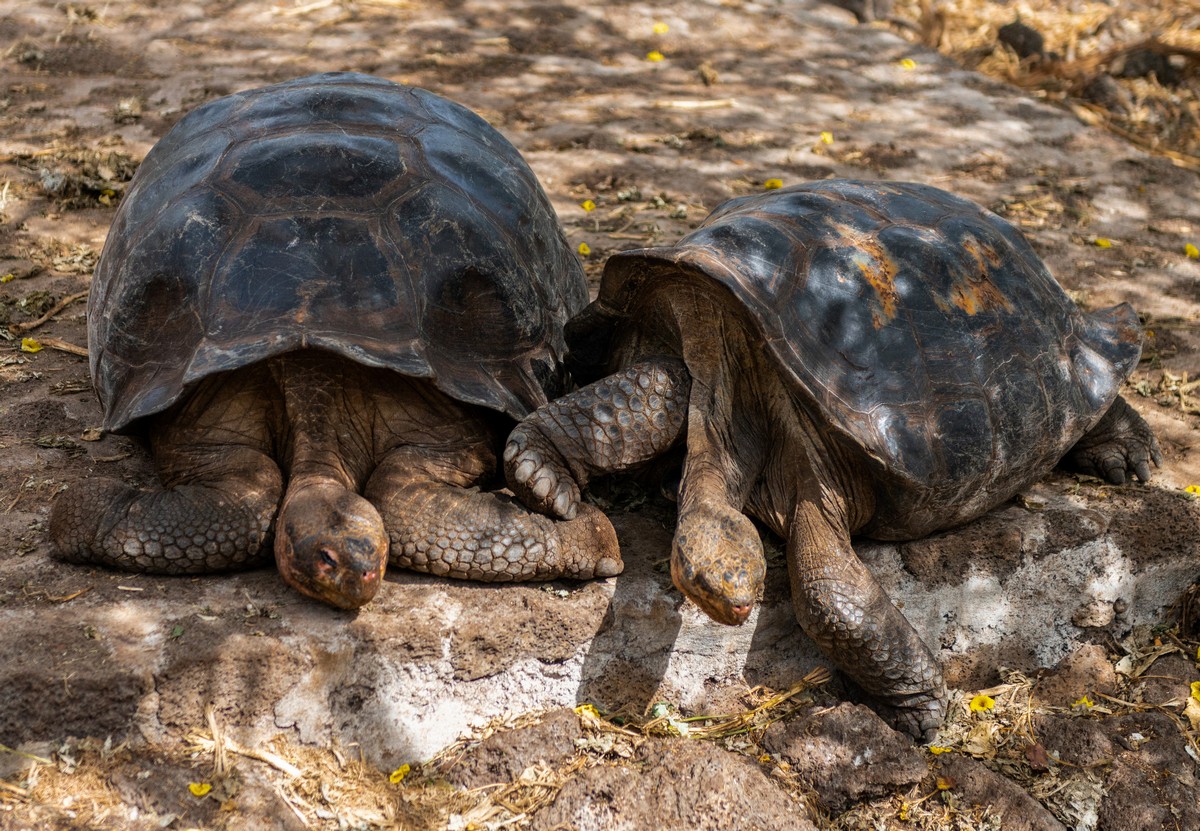 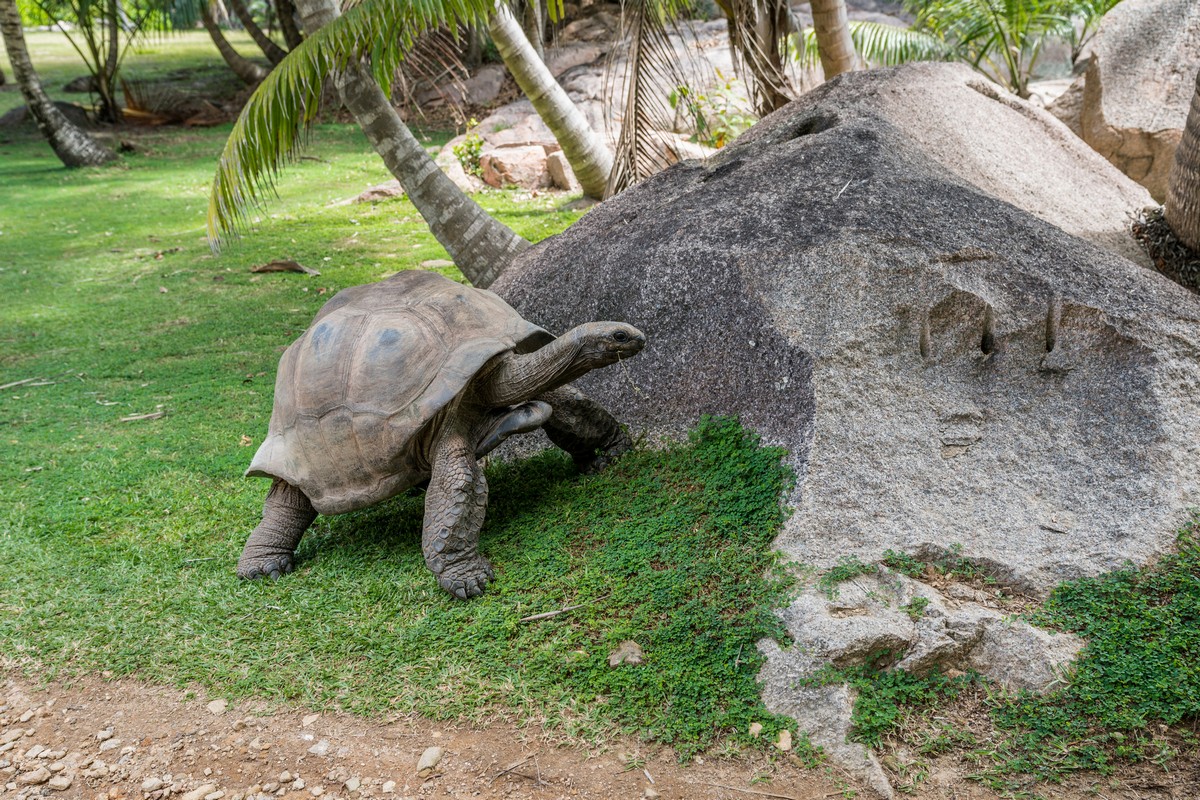 Curiously, there aren’t any ‘official’ answers to this question. But after much observation and reflection upon these wonderful tortoises, I’ve made up my own mind: I reckon that a long time ago they weren’t endemic; they lived all over the world in coastal tropical zones along these latitudes. Then they were nearly all killed and eaten up! Who by? Look in the mirror! Homo sapiens. Yep, we human beings nearly drove them into extinction. The only reason some survived was their living in two archipelagoes that were only relatively recently settled upon by man – in an era of more humane relations with nature. More discussion of this – here.

These days the tortoises are tenderly looked after and mollycoddled – so they can concentrate on more important things, like breeding! 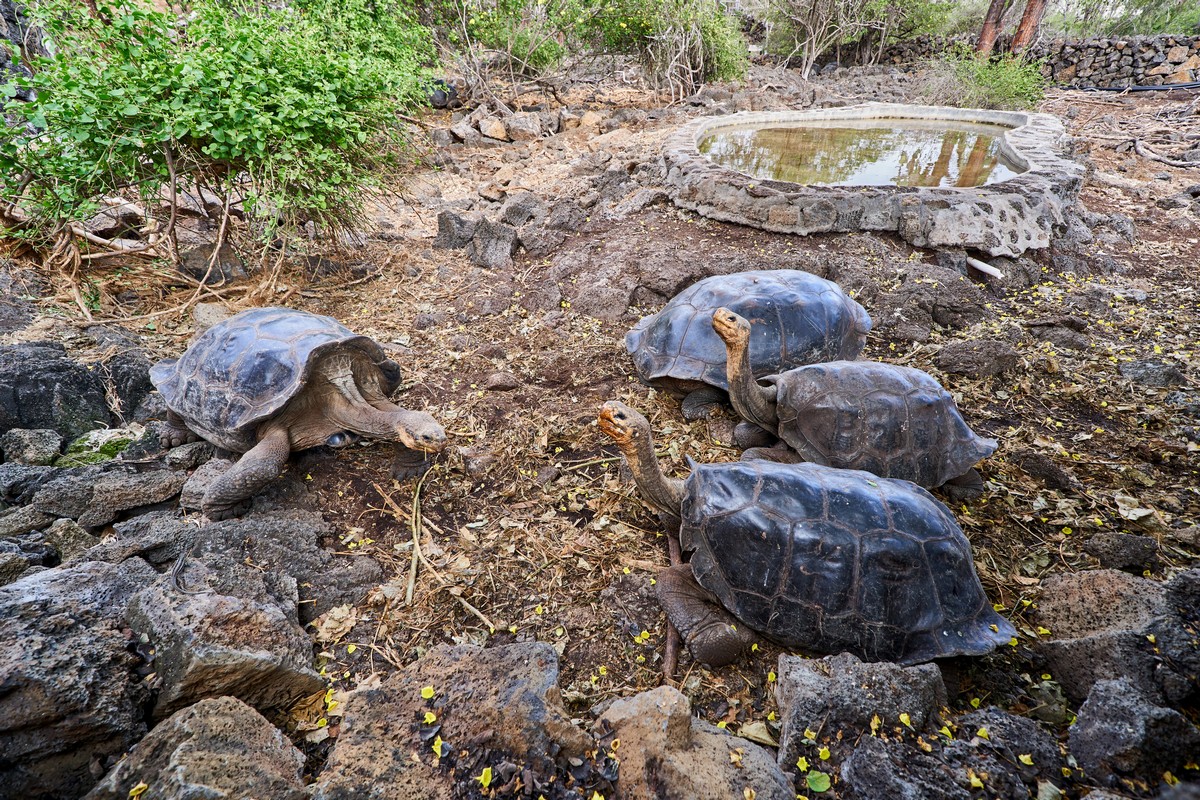 And the last two questions: about water on earth, and the moon in the sky.

Where did the Earth’s water come from?

Actually – no one really knows! There are theories, but only theories. Even Rosetta, sent to the 67P/Churyumov–Gerasimenko comet to investigate the comet theory regarding the origins of water, came up with nothing (it turned out the water on the comet wasn’t quite water as we know it here on earth).

Will the Moon fly away from Earth, or is there a precisely balanced system in place keeping the two together? 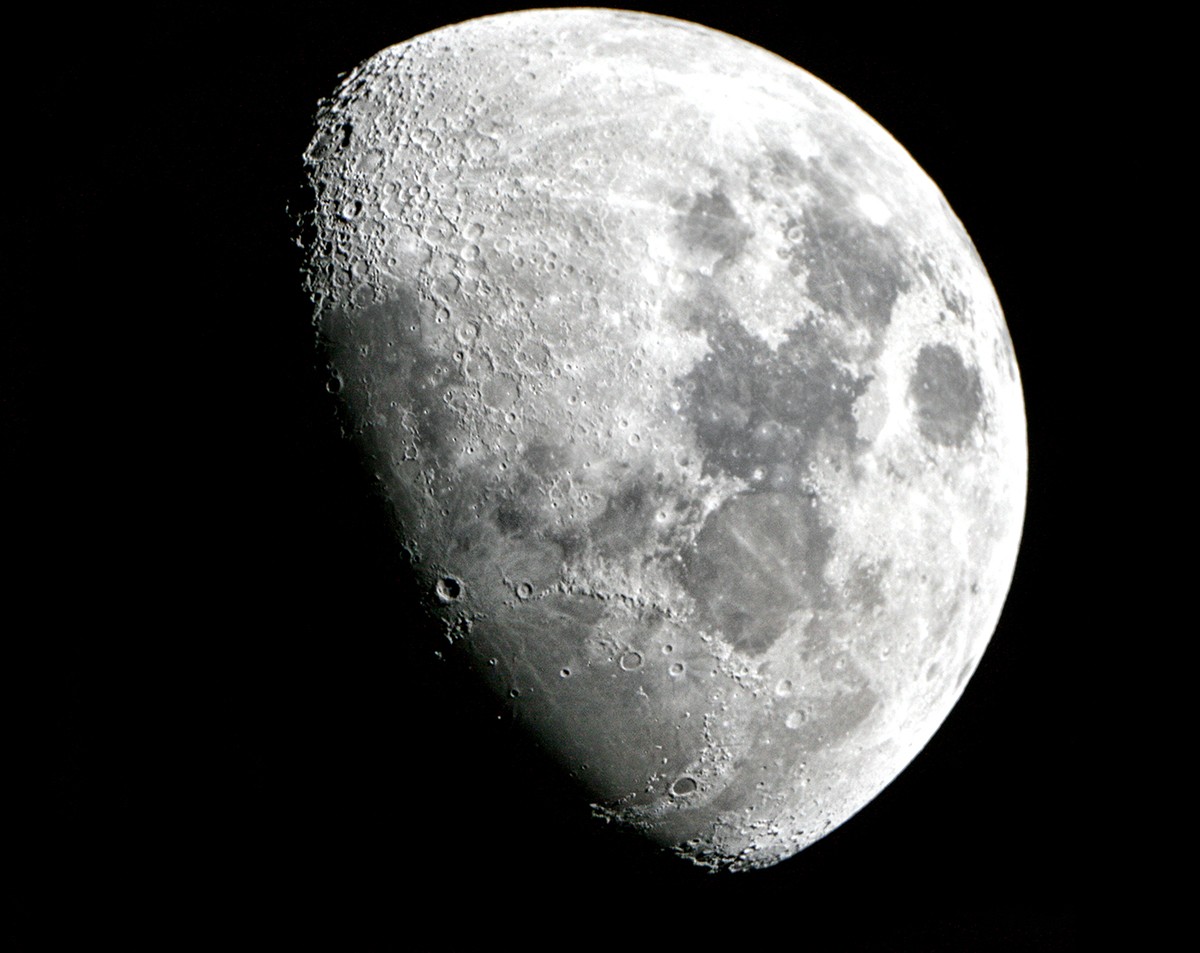 Alas, I couldn’t find a sound explanation. But, in trying, I did find out about amphidromic points – places in the oceans where there are no tides!

Since the question about the monoliths of Baalbek was rhetorical, please accept a new bonus question in its place: 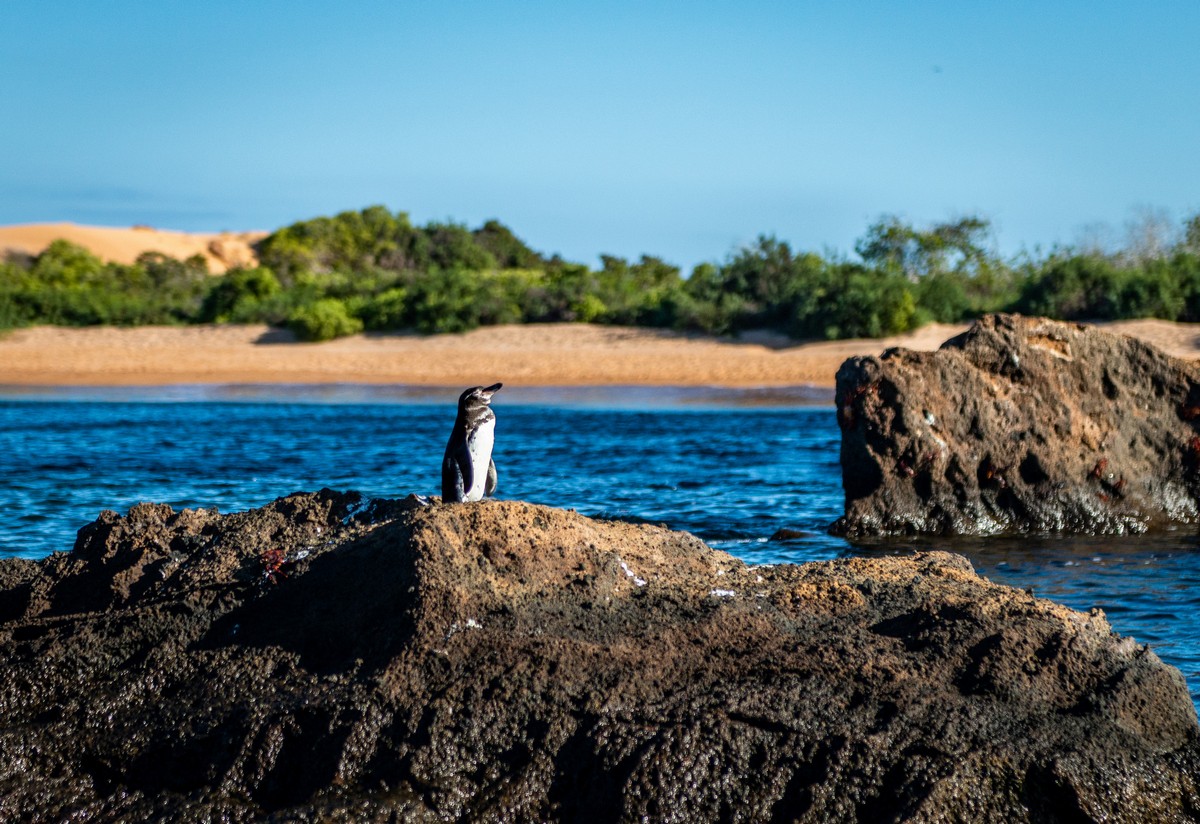 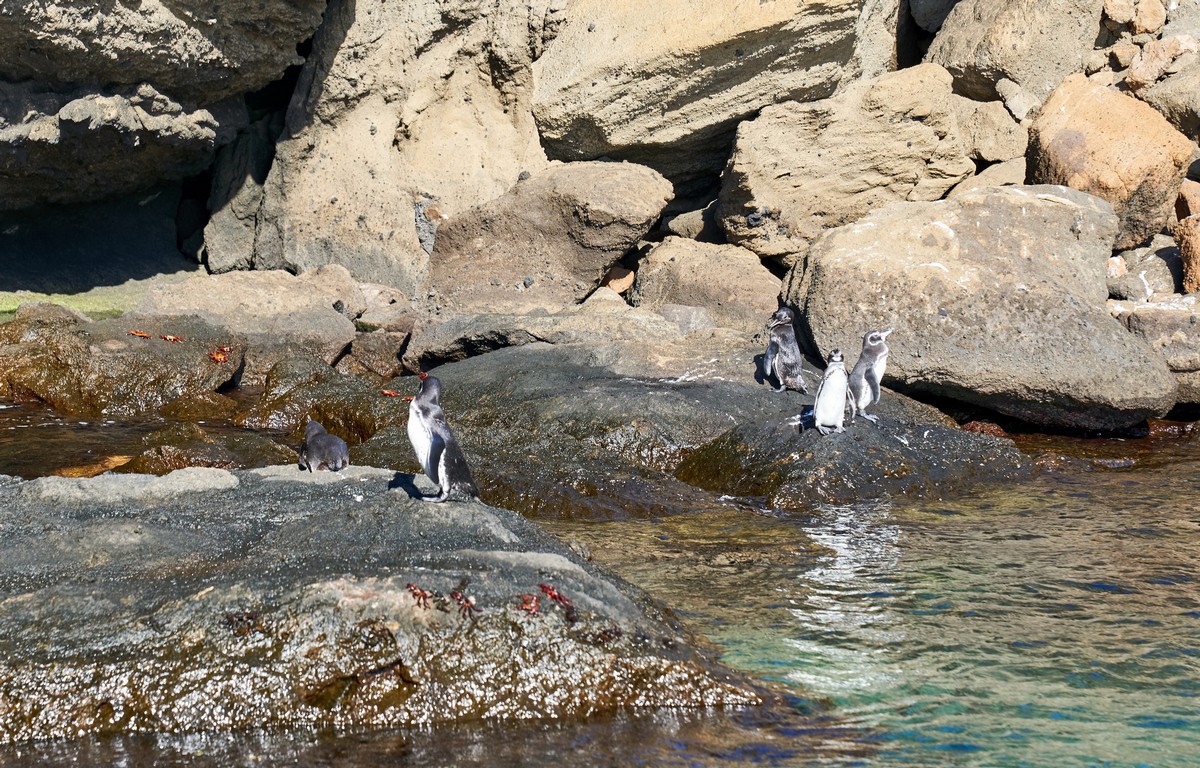 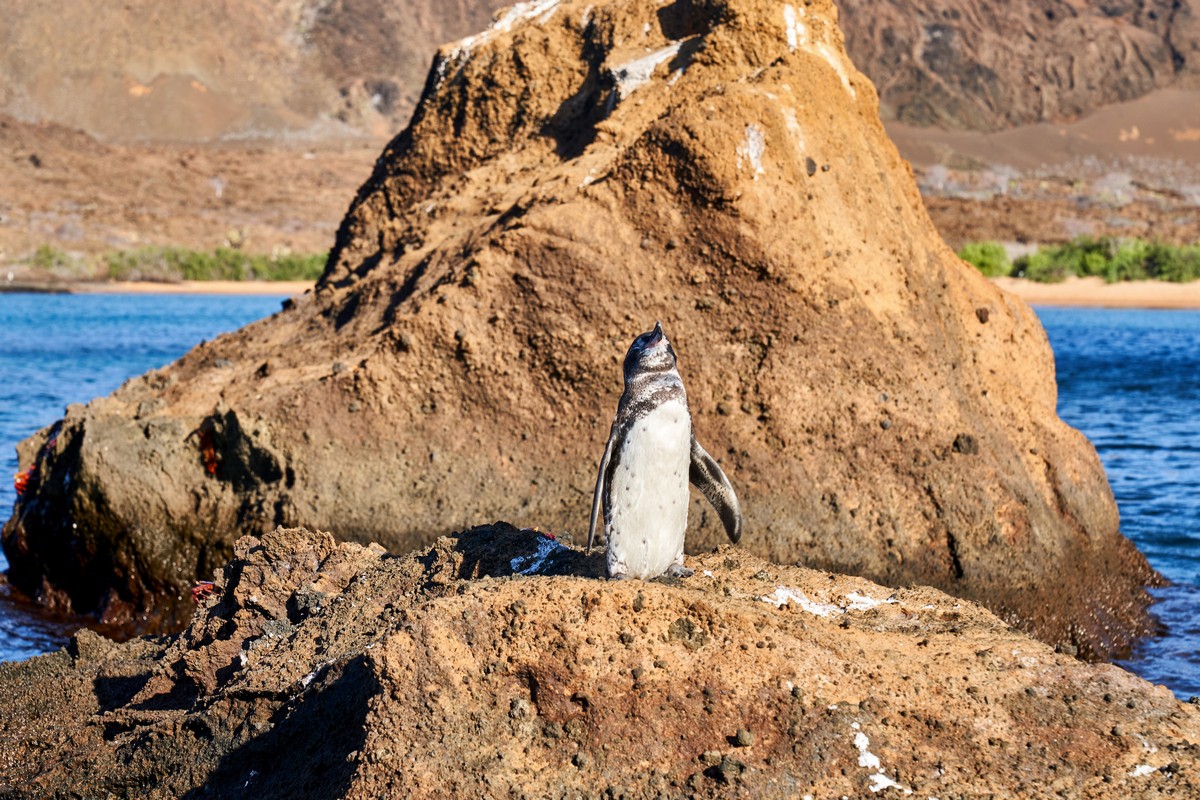 And those are all your answers folks! Thank you for your attention! Back tomorrow!…