On Earth Day – today – I’d like to say a few words about global warming, particularly the anthropogenic factors that contribute to it – or don’t!

I’d like to go over a few of the theories of, and interdependencies and tendencies regarding, global warming, and also compare some of the theory with the practical. I’ll do so through two two questions…

1. How will the world actually change as a result of global warming? 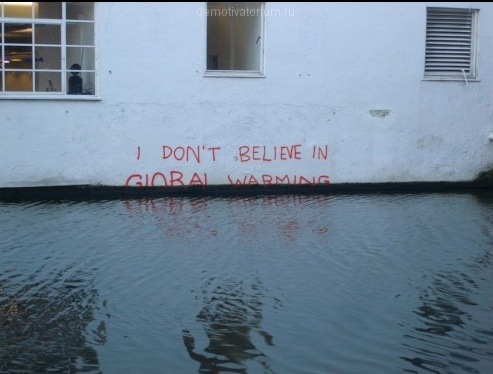 It is totally and blatantly obvious that the world is warming up. At a minimum in the arctic and temperate zones we can see this for ourselves.

Example: Around 40 years ago when I was a teenager, ~-20°С in winter in Moscow was the norm, -30°С was common, and the occasional dip down to -40°С or below occurred a few times a year. Such cold temperatures, it goes without saying, came with a lot of snow. Today, Christmas and New Year can come and go… without snow! WHAT?!

But it’s not just Moscow. Warming is everywhere. Take… Siberia as another example. But here the damage done may become apparent sooner rather than later: extreme global warming may see inner Siberia becoming an appendage to the Gobi Desert, with Lake Baikal surrounded by tall barkhan dunes. And that’s only after so much methane and other harmful gases have been emitted into the atmosphere that the permafrost in the region – permanently frozen for millions of years – will start to melt!

And it’s not just Russia, of course. But for some regions it will be a different thing altogether.

Take the Middle East, for example. With global warming, excessive evaporation of oceanic water could radically alter the quantity of rain in the region. This could mean the region turns into a fertile flowering garden instead of a famously barren desert. Or… maybe not. We don’t know for sure, we can only speculate!

Then there’s a theory that the current warming is the calm before the storm a mere climatic fluctuation before… an upcoming ice age!

2. How will nearly the whole world’s industry coming to a halt affect the growth of CO₂ in the world’s atmosphere?

As I said, the Earth’s climate is warming. Carbon dioxide is blamed for this, the concentration in the atmosphere of which has been relentlessly climbing up and up – for several decades already. Some say this is all down to humans; others say that that must be some kind of delusions of grandeur: humans are way too insignificant to be able to seriously affect protracted natural global climate cycles. Though Wikipedia in English doesn’t mention an approximate percentage of how much of the increase in CO₂ emissions is down to humans, Wikipedia in Russian does: just 8%. But let’s leave Wikipedia’s different-language differences to one side for today: other Western credible sources in English put the figure even lower: 5%.

There are a great many arguments in the discussion of global warming, including straight-up denial (yep, still!), and technological pseudo-scientific preaching. Each argument has its army of followers and a slew of tables and graphs and stats giving the ‘proof’ (and a marked absence of ‘inconvenient’ tables and graphs and stats that provide contrary ‘evidence’). Heck, even I’ve put my oar in (search for the second ‘climate change’ mention there) a few times.

However, instead of giving a preference to one argument or another, I actually think that not only does the question of what/who is to blame for global warming – geo-cosmo-natural or anthropogenic – have no answer, but that the question itself is stated… incorrectly; a particular answer is always in someone’s interest, and so the question is stated wittingly with bias built in. Hmmm, that came out a bit complicated. Let me try and explain…

Is the temperature of the Earth’s atmosphere rising? It’s rising. Fact.

Is the number of humans rising globally? Rising. Fact.

Also fact: the level of CO₂ before the appearance of industrialized humans would also change; it would go up, then down. This, for example, can be seen in the analyses of the ice core from Vostok Station (btw, self-isolating there – no problem!). Now, in order to blame humans for global climate change, three things need to be measured:

The modern-day increase in CO₂ tells us merely (i) that the balance between these three factors is out of whack; and (ii) that man can be blamed not so much in that that he pollutes the atmosphere too much, but in that that he’s chopping down trees and killing the ocean’s flora way too much. To understand the whole picture we need to calculate more accurately changes in natural consumption of carbon dioxide. How do we do this? Alas, I don’t know. But somehow, surely, it’s possible, no?

Curiously, we’re currently living in… interesting times, and it just so happens that we may be able to get an answer to the second of my two questions here today (‘how will nearly the whole world’s industry coming to a halt affect the growth of CO₂ in the world’s atmosphere?’).

I have to say, it will be somewhat odd if the lockdown makes no difference whatsoever. I mean, among many other things, it would complete cancel out the need for the Kyoto Protocol and the Paris Agreement, while making a mockery of every country that ever signed either; or am I being too harsh there? ‘Mistakes happen’, they’ll say!

Aaaaaanyway, in closing, I just want to make it crystal clear that these here mind-meanderings through a very sensitive subject are just that – thoughts and ideas for further discussion. I am categorically against any unsustainable pollution of our planet. And I’ll be sincerely happy if the result of the ‘experiment’ is one of carbon dioxide’s rise slowing. That would prove that humans are serious contributors to the rise, and hopefully provide more encouragement and stimulus for cleaning up our act all the more. Indeed, I hope the experiment shows this. However, if the line on the graph showing the concentration of CO₂ continues to slither upward despite the lockdown/shutdown… Yep, that will be – extremely – odd. Let’s wait and see!…