Regular readers of this here blog of mine will know I’m a big fan of walking/hiking/trekking – whatever you want to call it – on paths/routes/tracks (whatever you want to call them!) in far flung places on this dear planet of ours. I carefully study the landscapes around me, reflect upon them – meditate upon them – photograph them, and then later bring it all together, put the impressions into text form, and come up with a blogpost like this one you’re reading now. I even had a list of my fave walking routes… ah yes – here it is.

Well, recently in Tasmania I procured myself a +1 to what are to me the most amazing specially-designated walking routes: it was the Three Capes Track (official site).

// Yes – as you’ll see on the official site there the track is currently closed due to corona; we were lucky to have walked it just in time: our guides told us how we were practically the last booked in to walk it before the closure. But that’s beside the point: one day things will return to (~) normal, and the track will be opened again for walkers.

It’s not a difficult route: a comfortable 50km doable in three and a half days, along its smooth, sturdy, well-signposted paths. Spending the night here is convenient too – in lodges along the way (for the peak season – November to February – these need to be booked in advance). The views are oh-my-gorgeous, easily earning a 5K rating, aka – KKKKK!

Here are the views of Tasman Island and the ‘Blade’ peninsula. And we’re heading in their direction… 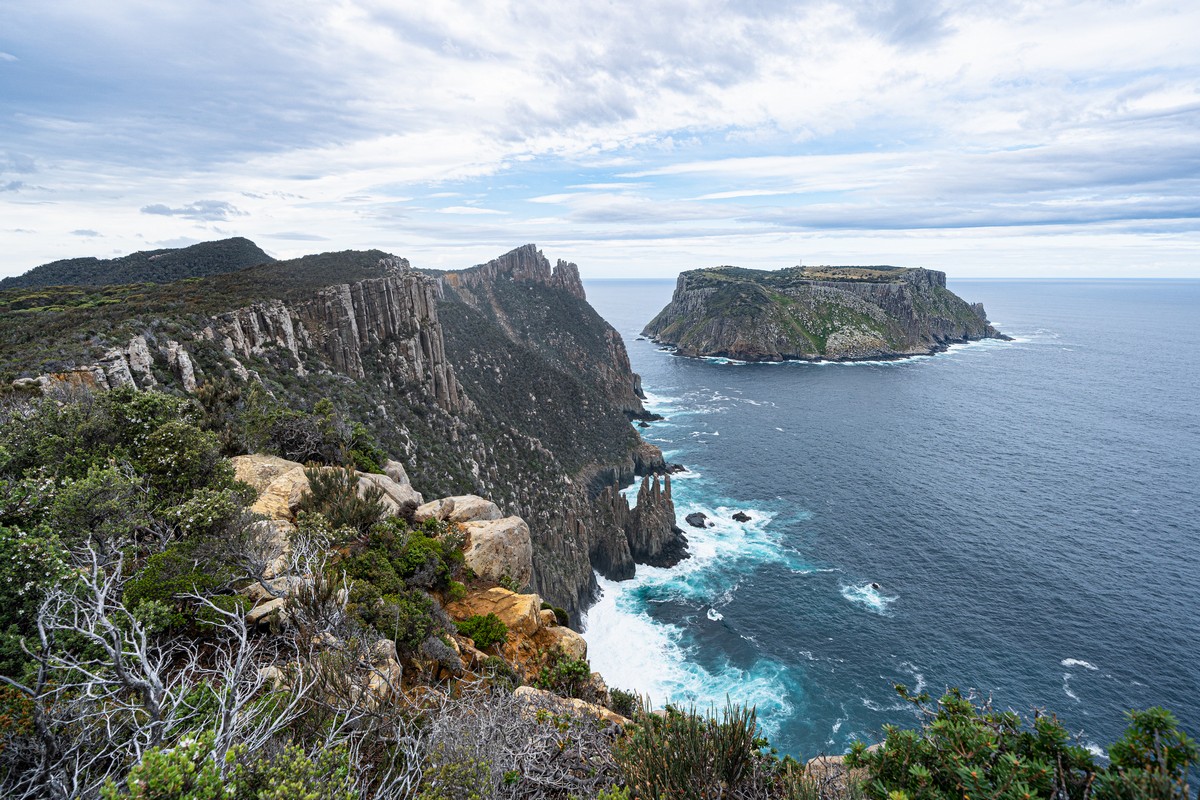 Assorted snaps of the stunning scenery:

Here’s an overview of how you trek this track:

First you take a ferry to the start of the track (marked with a green star on the map below). Once there the first day’s walk is a mere six kilometers long! Yes, the intensity level of the hiking here is fairly pensioner-grade. But we weren’t permitted to walk the route on our own – we had to be with guides. This actually turned out to be a blessing: they have the best lodges reserved for themselves and their tourists – with breakfast, lunch and dinner included. On your own you have to bring your own food, I believe.

So off we popped, heading south, while our guides told us plenty about the place and its history.

On the second day, thankfully, there were 12 kilometers to walk. And they were walked at a steady pace and along mostly flat land in the direction of Stolbchaty, Kunashir, Cape Pillar.

Day four: to Cape Hauy and to the end of the route – again around 15km, but this was the hardest day’s walking as there’s a lot of up-and-down. // The distances can change depending on which lodge you stay in. 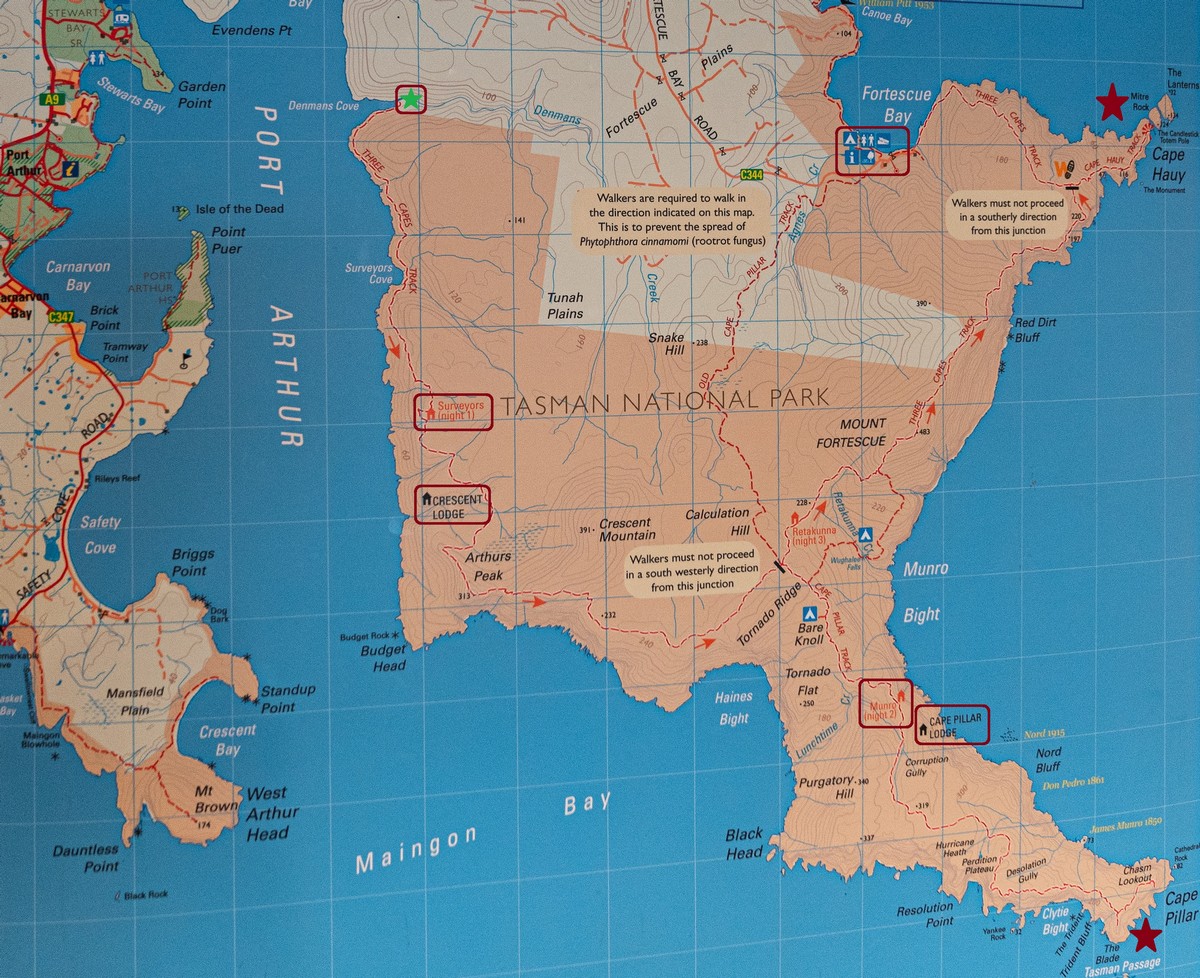 Back to day one…

We get into the boat, the heavens opened (for luck!), and we sailed… 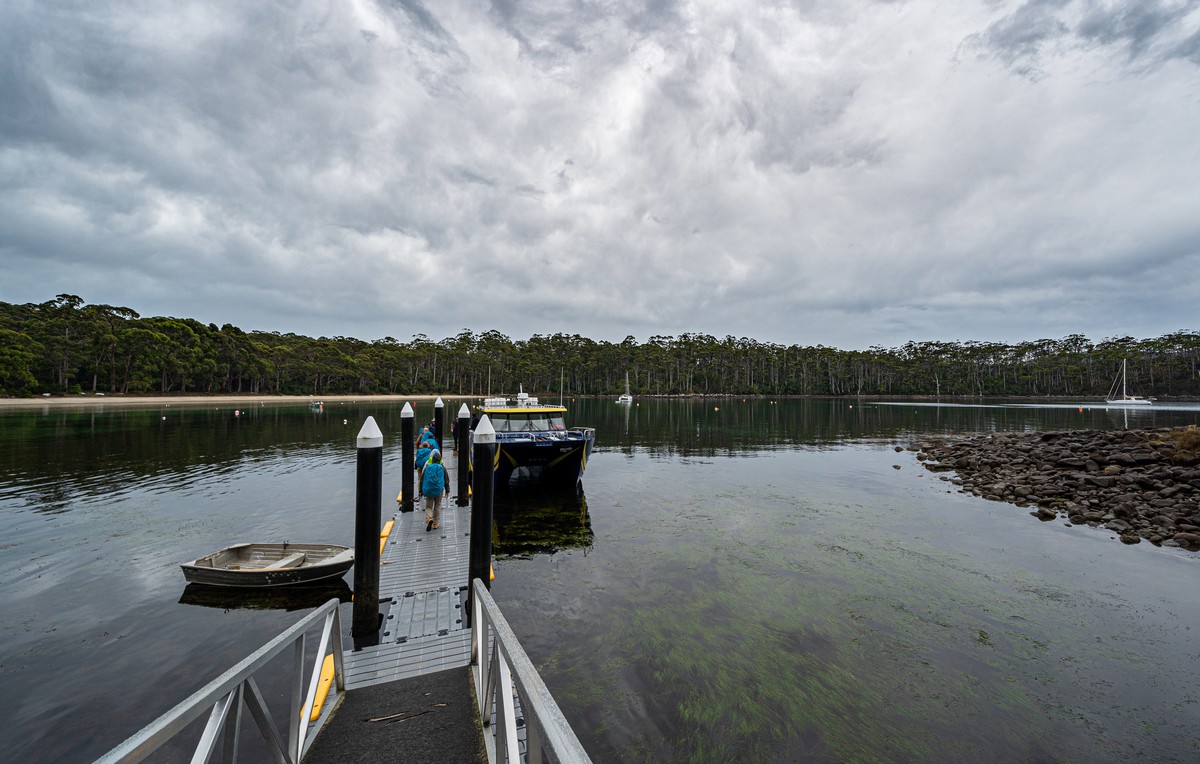 The brochures promised a leisurely scenic route all around the bay; in actual fact all we got was point-a-to-b by the quickest, most direct route. 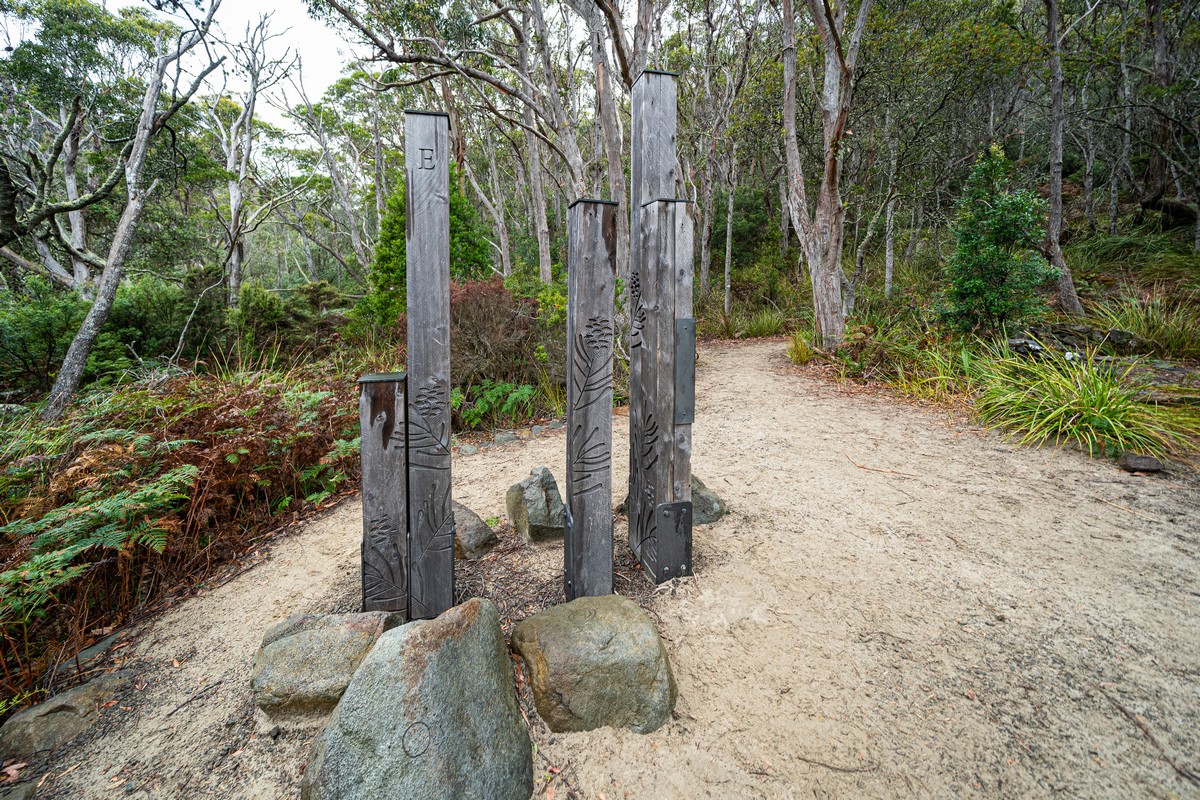 We set off on our trek. Here come four super days on foot!… 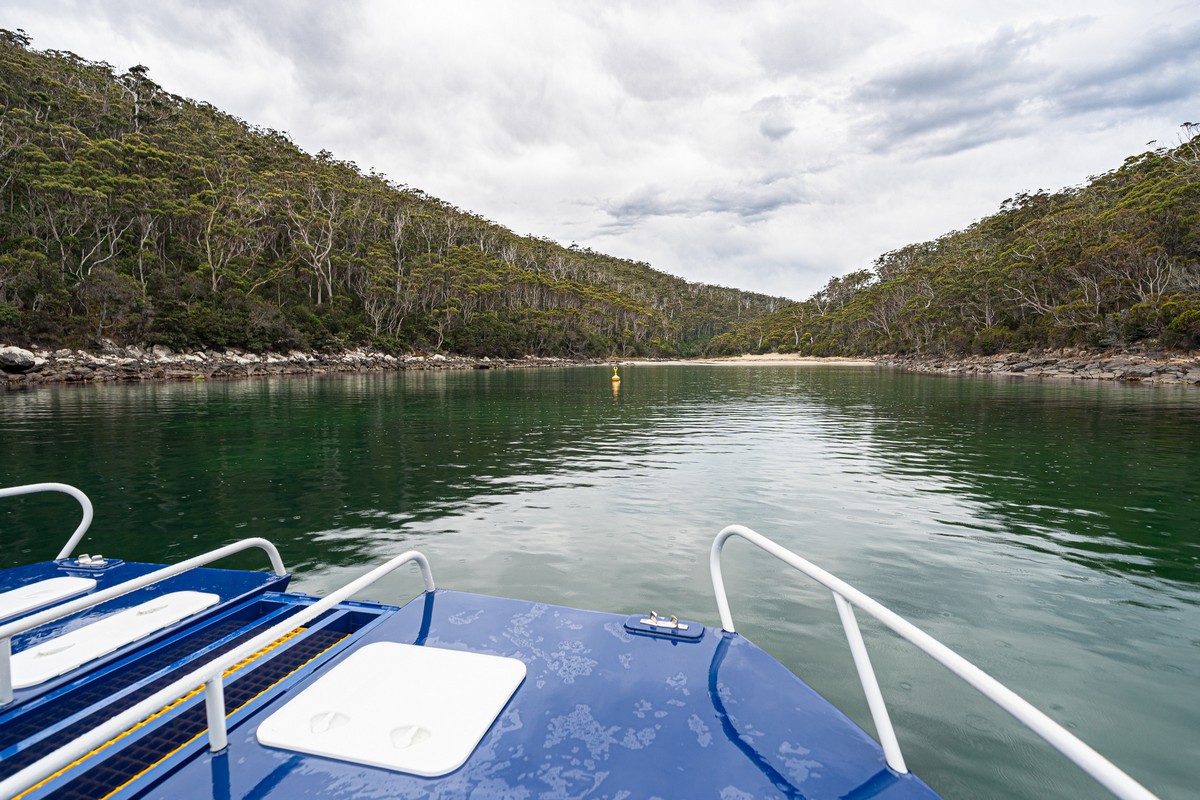 The first astonishment: upon entering the national park the track is in you need to… wash your walking boots and sticks! I haven’t seen that since… I flew to the South Pole.

Here’s one of our guides. Alas, he’s probably not working now, poor chap (. 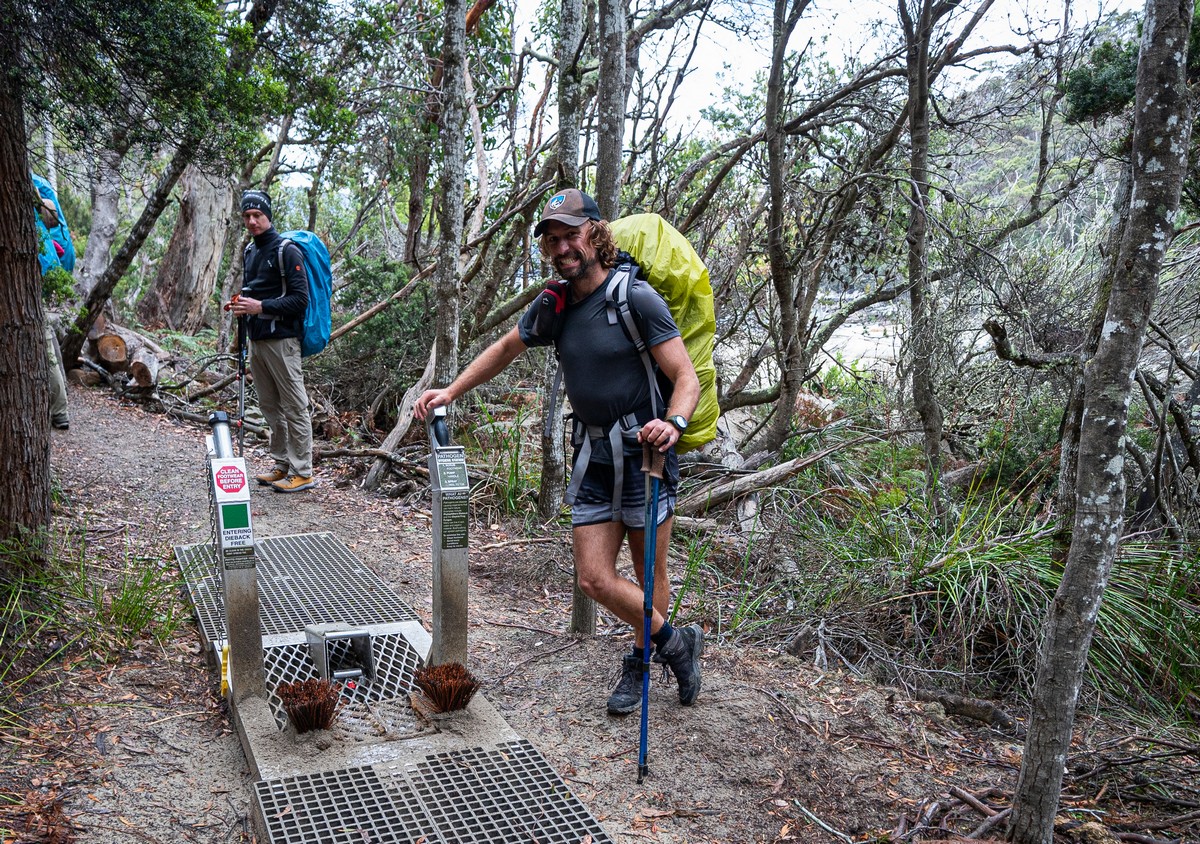 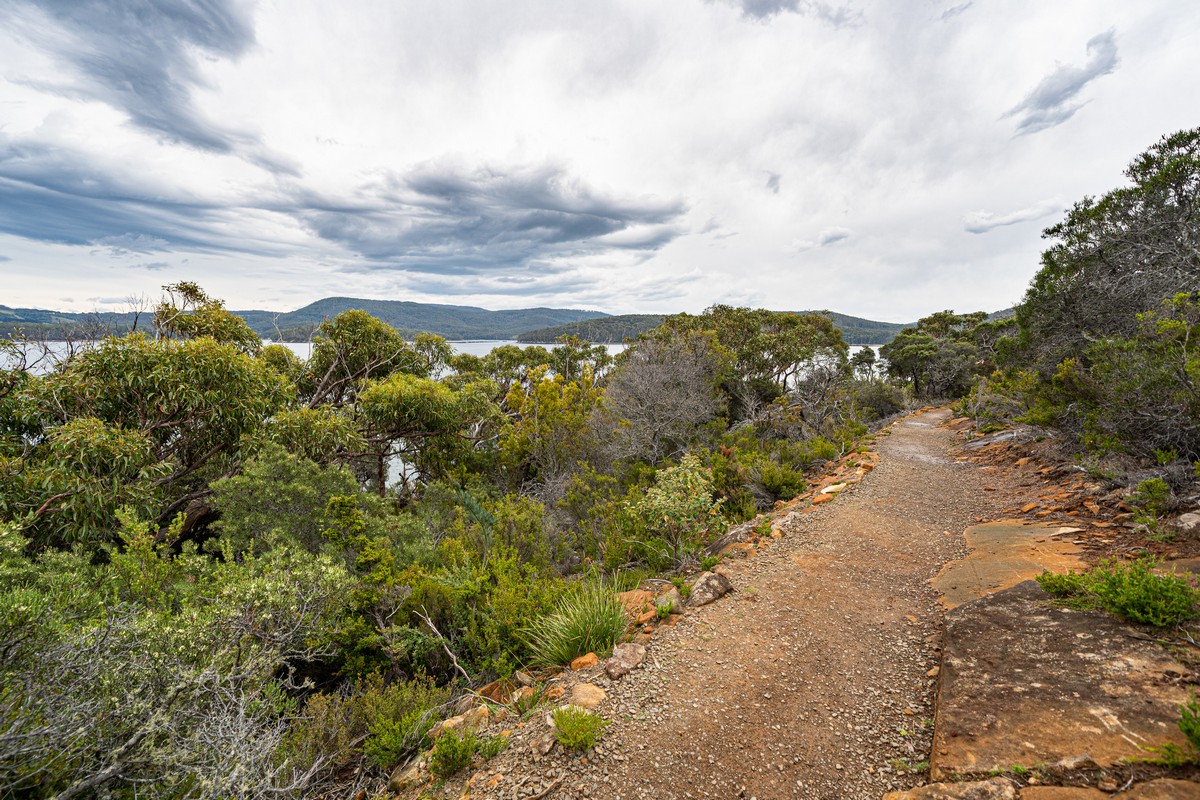 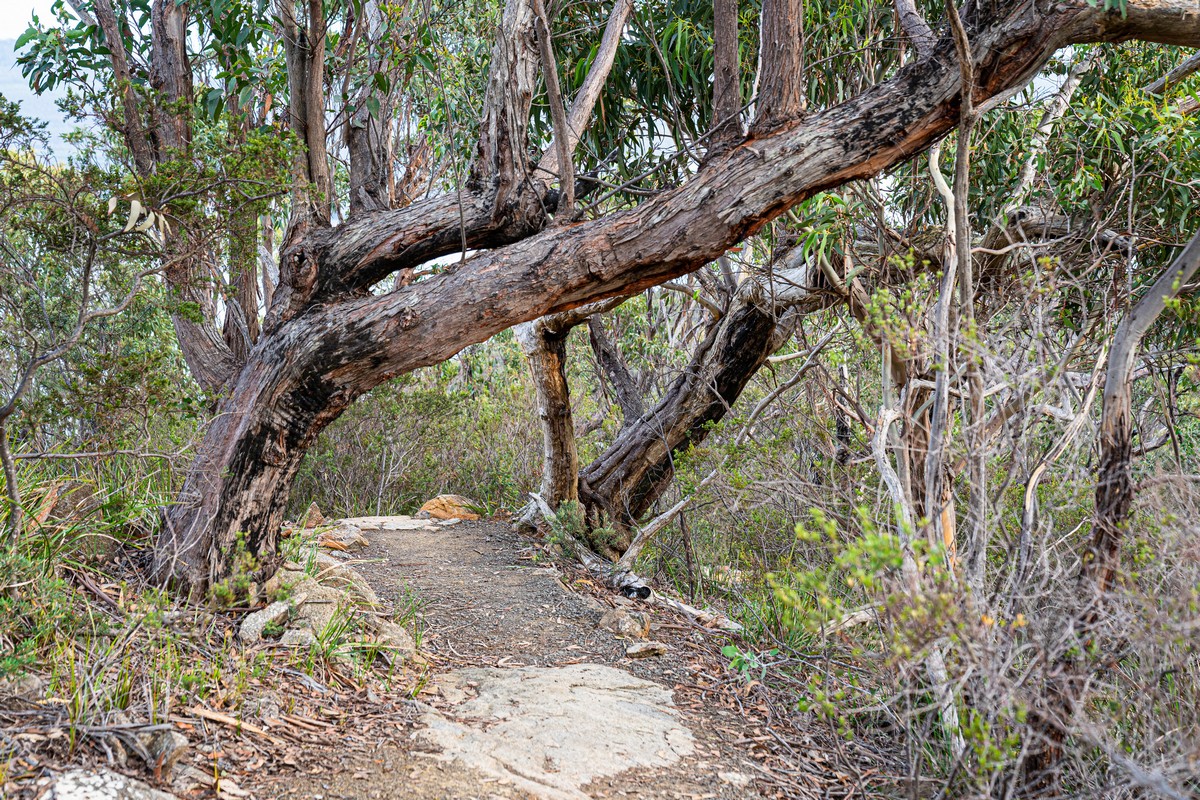 For the hilly bits – steps: 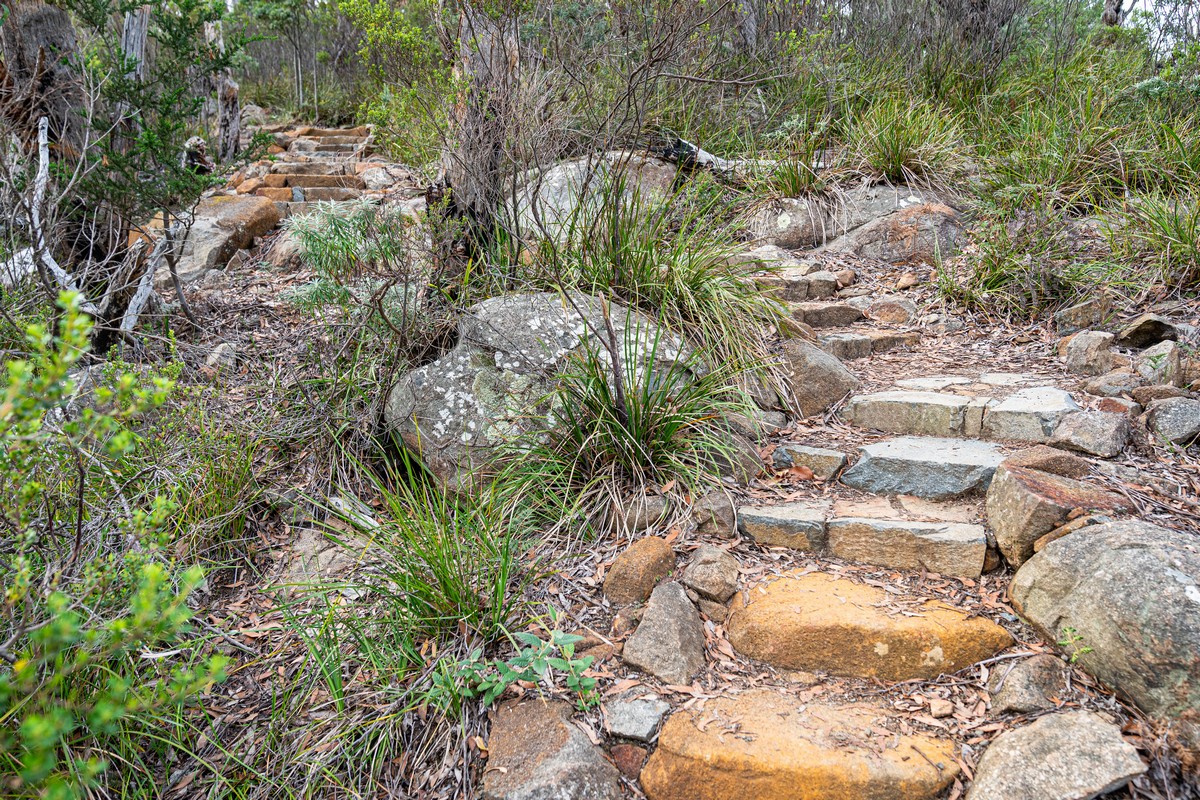 Signposts at every junction: 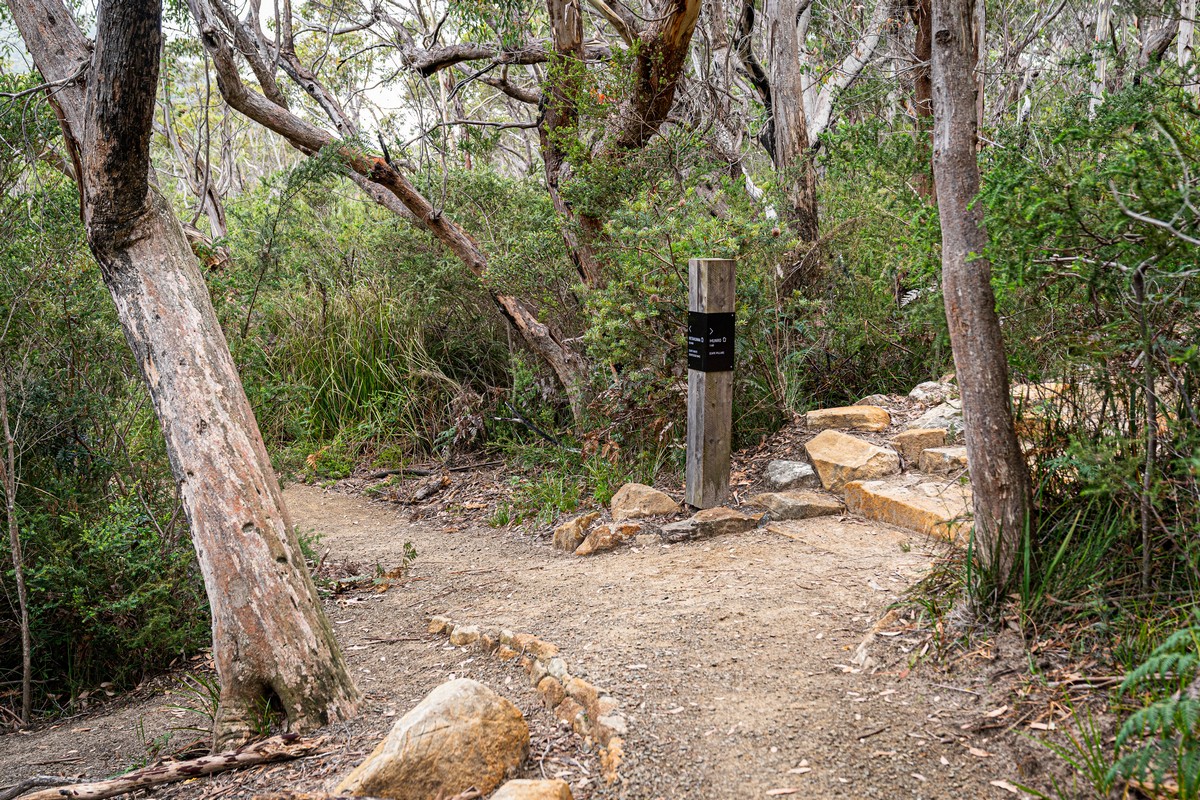 To avoid walker-jams – many of the paths are one-way: 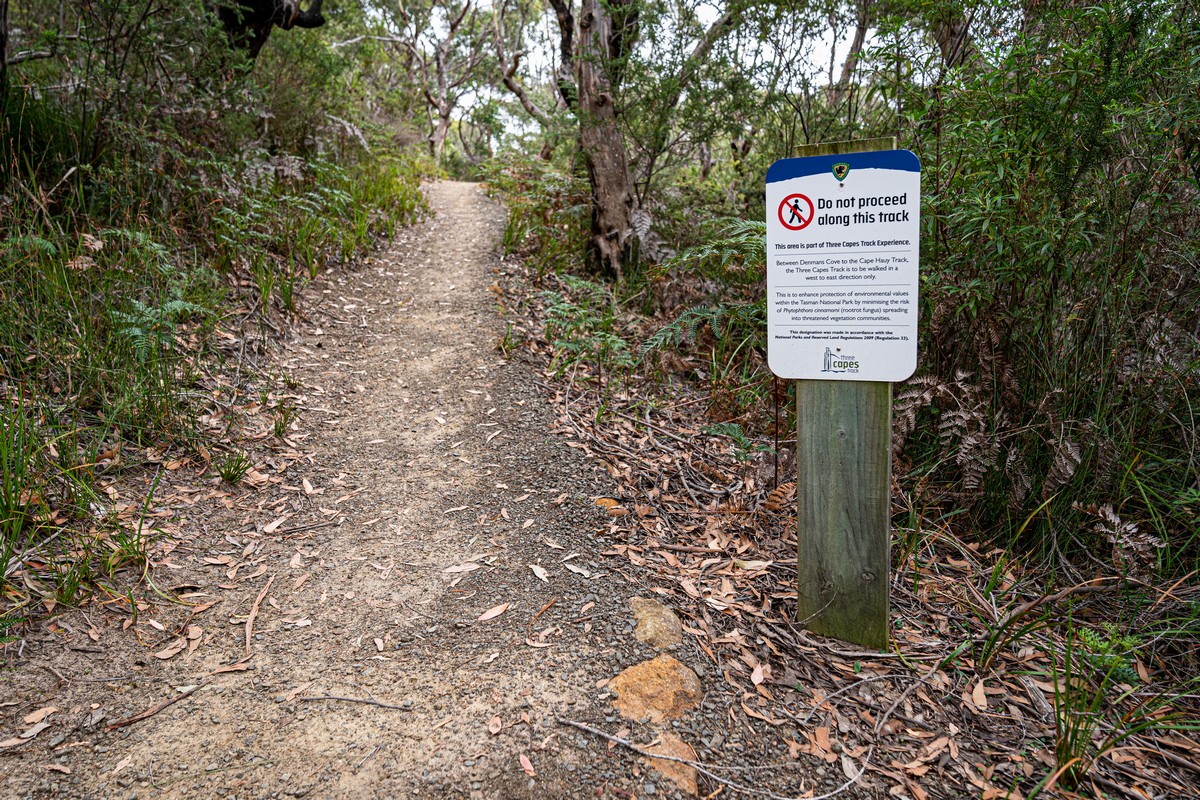 Here’s an old track via which you can run/march to Cape Pillar and back in a day. However, it works out at around 30 kilometers. That’s a bit too much uptempo walking in one day: when would I have time for all my pauses for appreciating – and snapping – the surrounding scenery?! 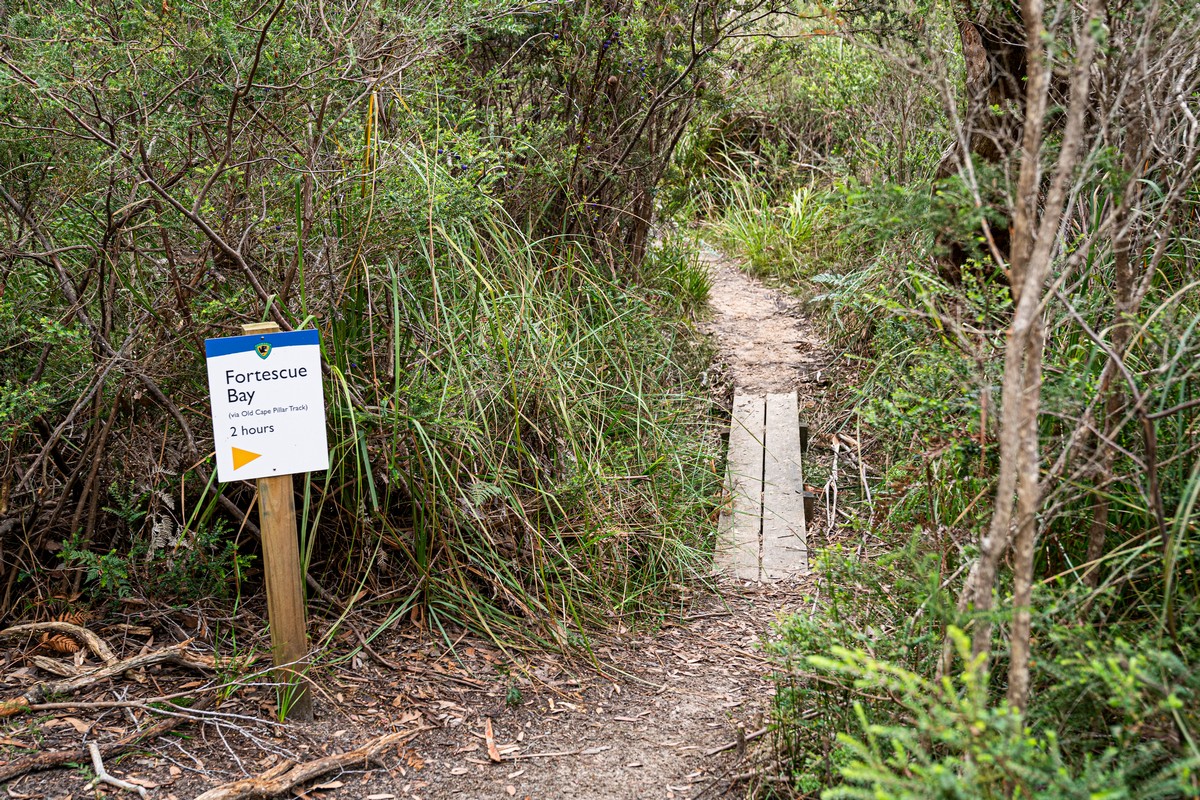 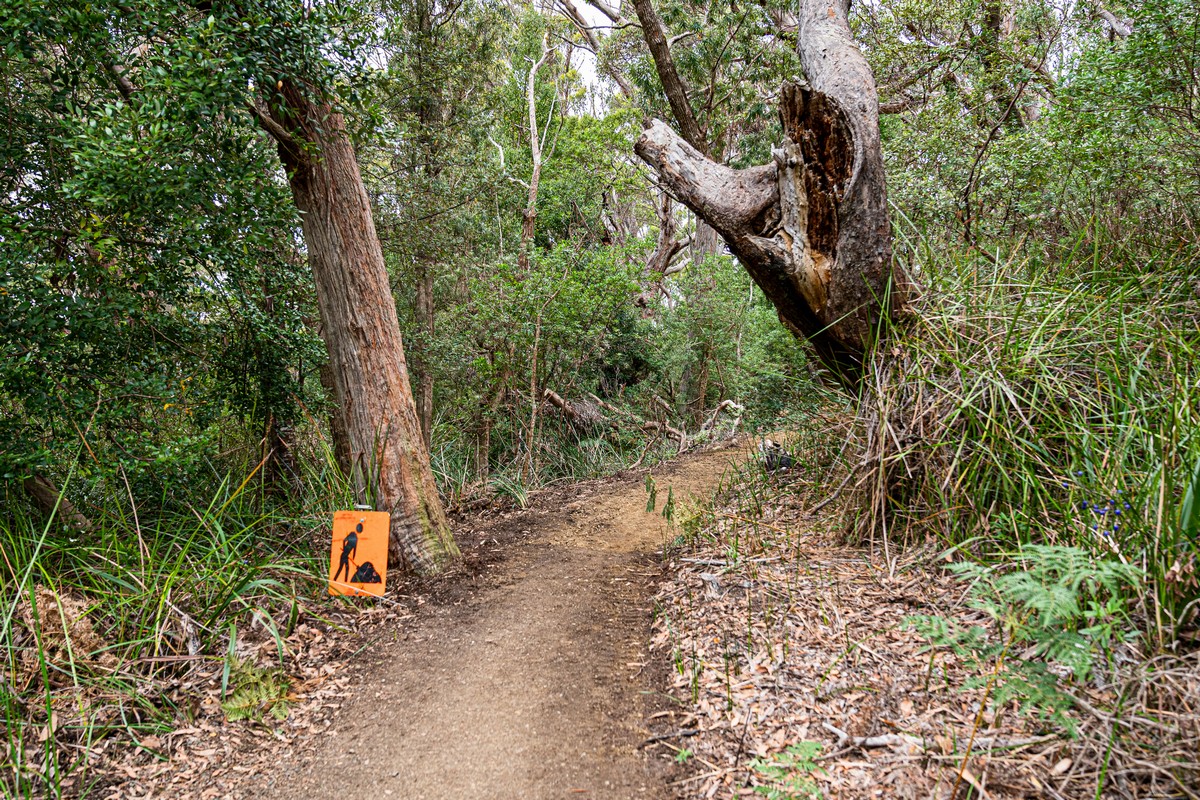 Actually – yes. Not quite road works, but a good mini-imitation thereof!… 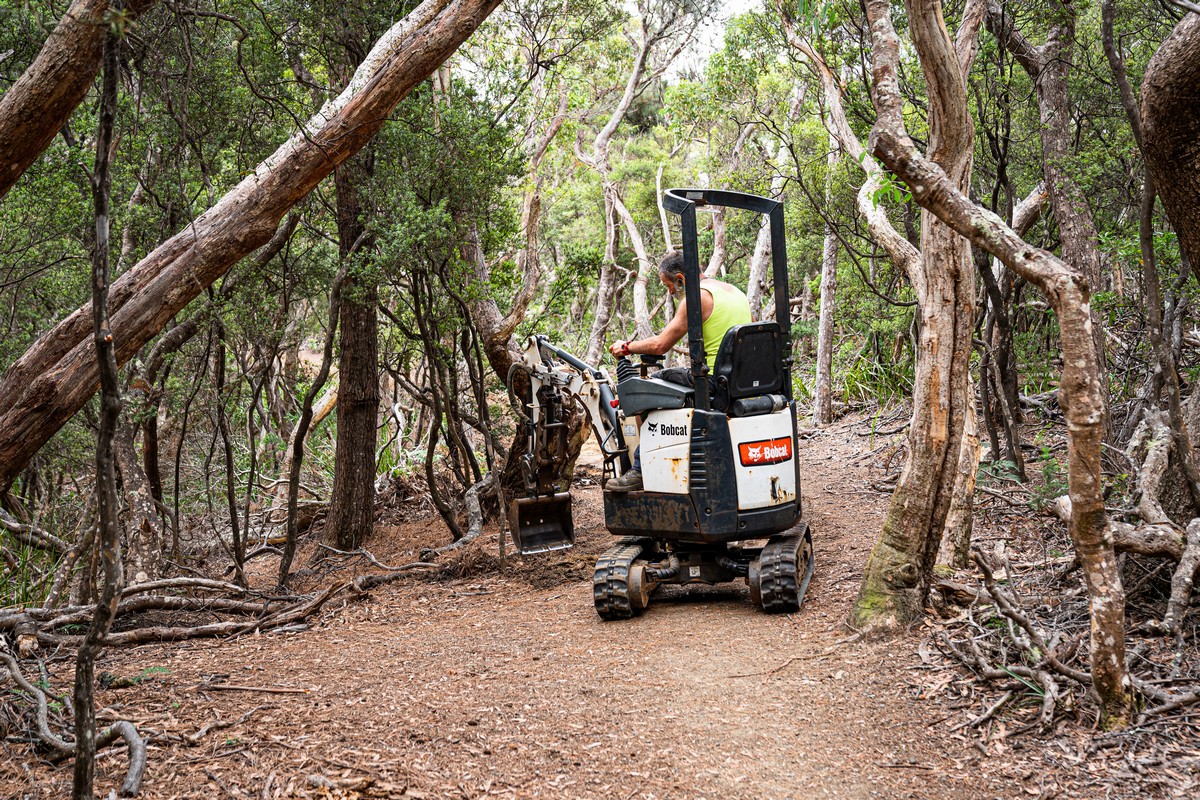 After 15 minutes of strolling, we come across a bench. This was our first official stop: 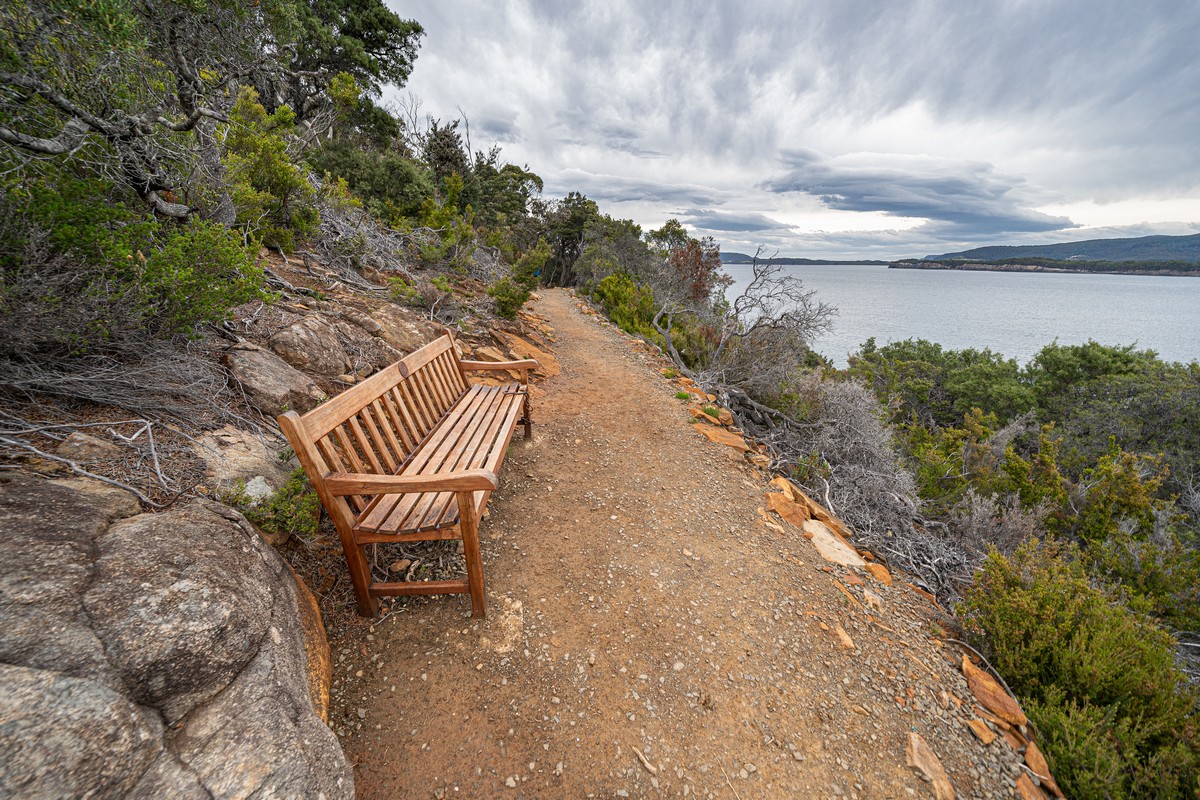 The view from the bench is of Port Arthur, about which I’ve told you already: where the British would send their convicts. It was here on this bench we heard some of the horror stories from when the prison was in operation. And as if to remind the guides to keep coming out with the ghoulish anecdotes – a leg clamp attached to the bench! 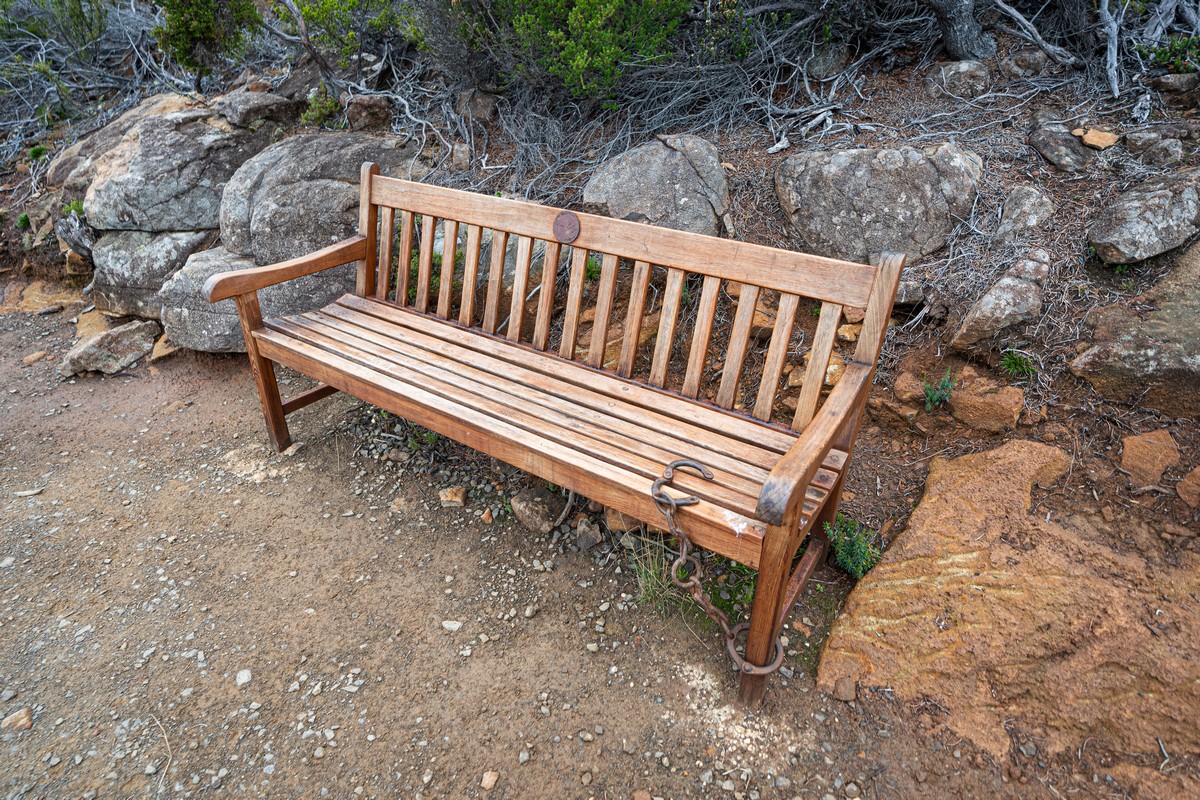 More reminders of the place’s history… 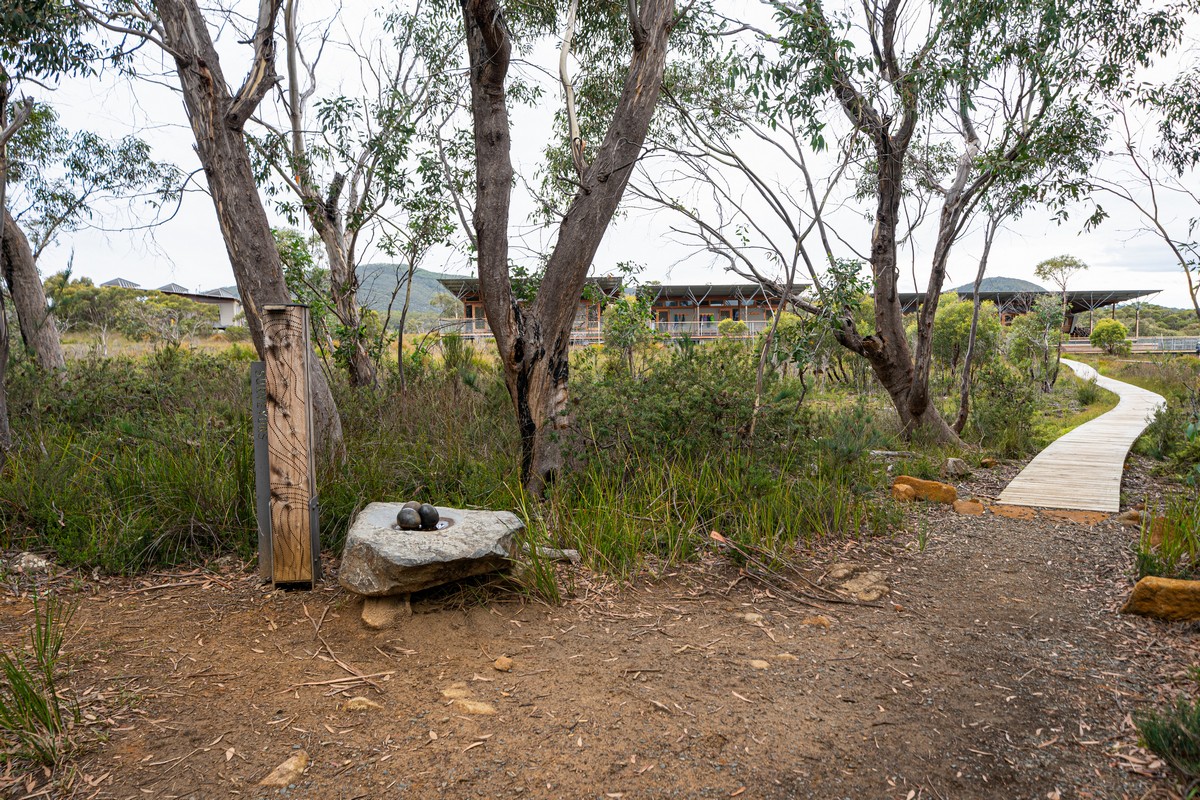 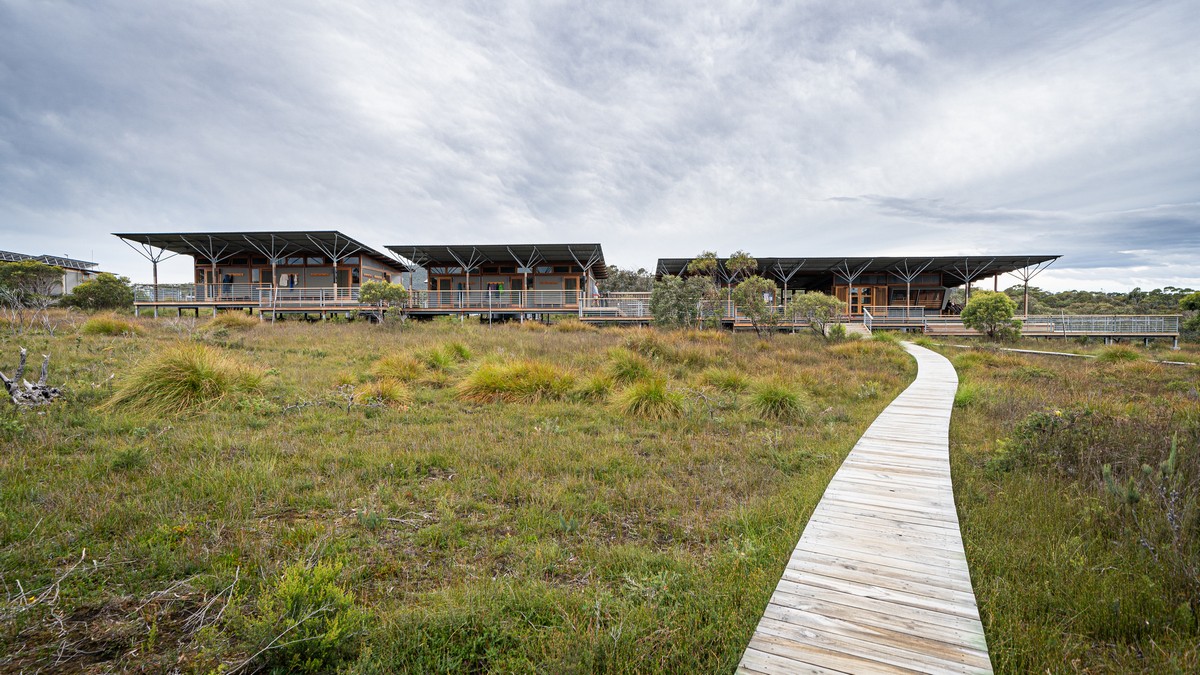 The benches come in different shapes and sizes. Some even ‘designer’, with added kunst and/or historical information… 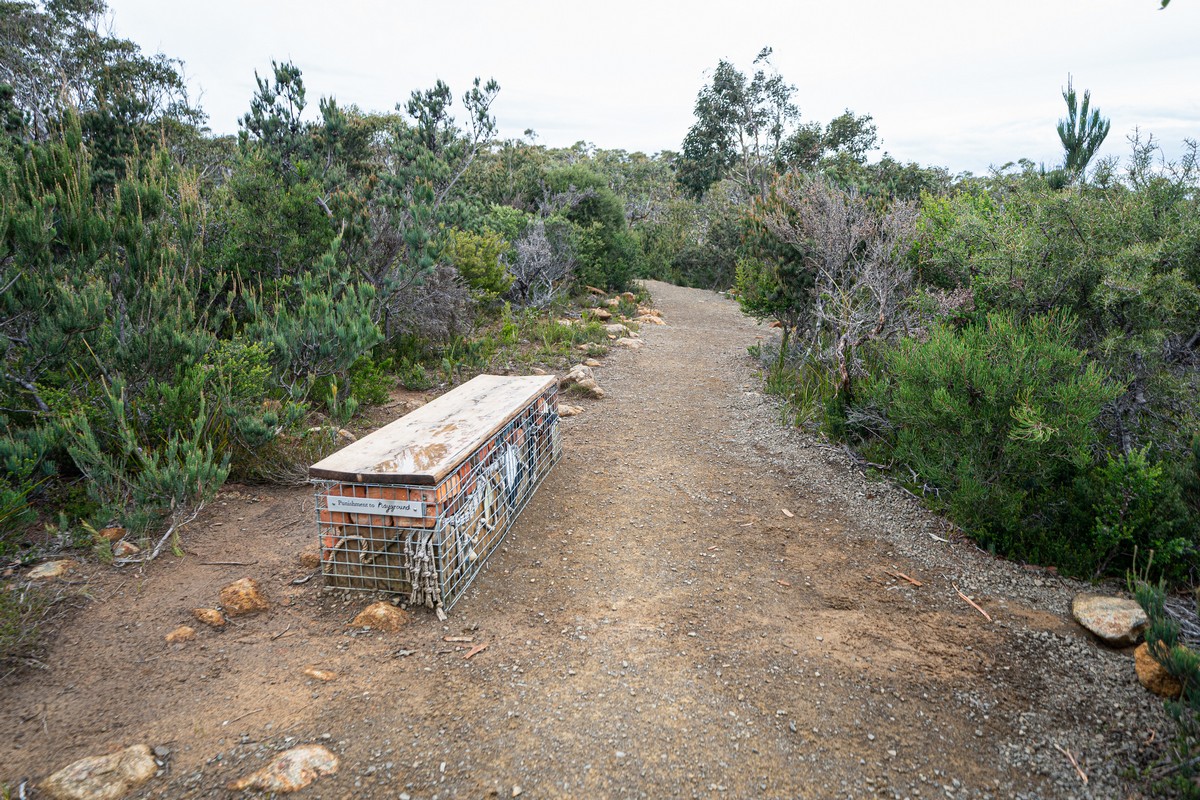 Not sure what these seating arrangements represent: 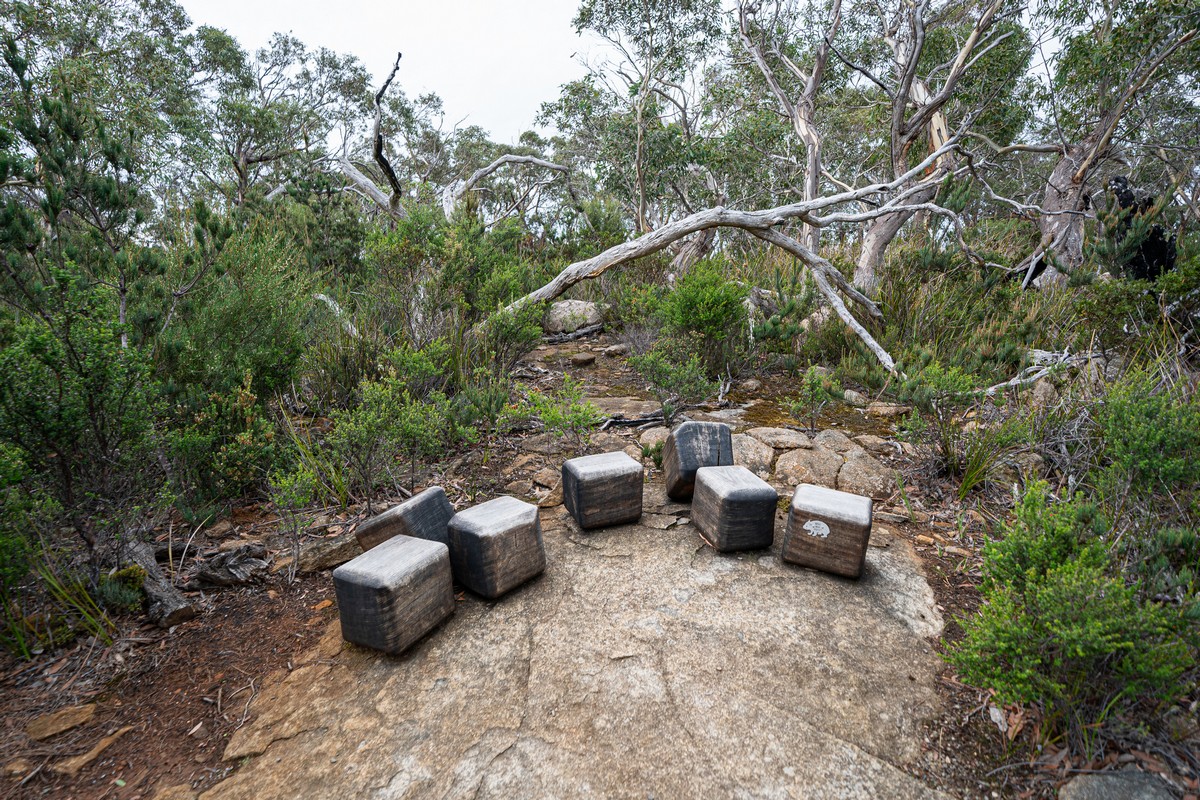 Ah – I do believe they represent nothing too deep and philosophical; instead – the shape of the… dung that wombats drop! Well – almost )… 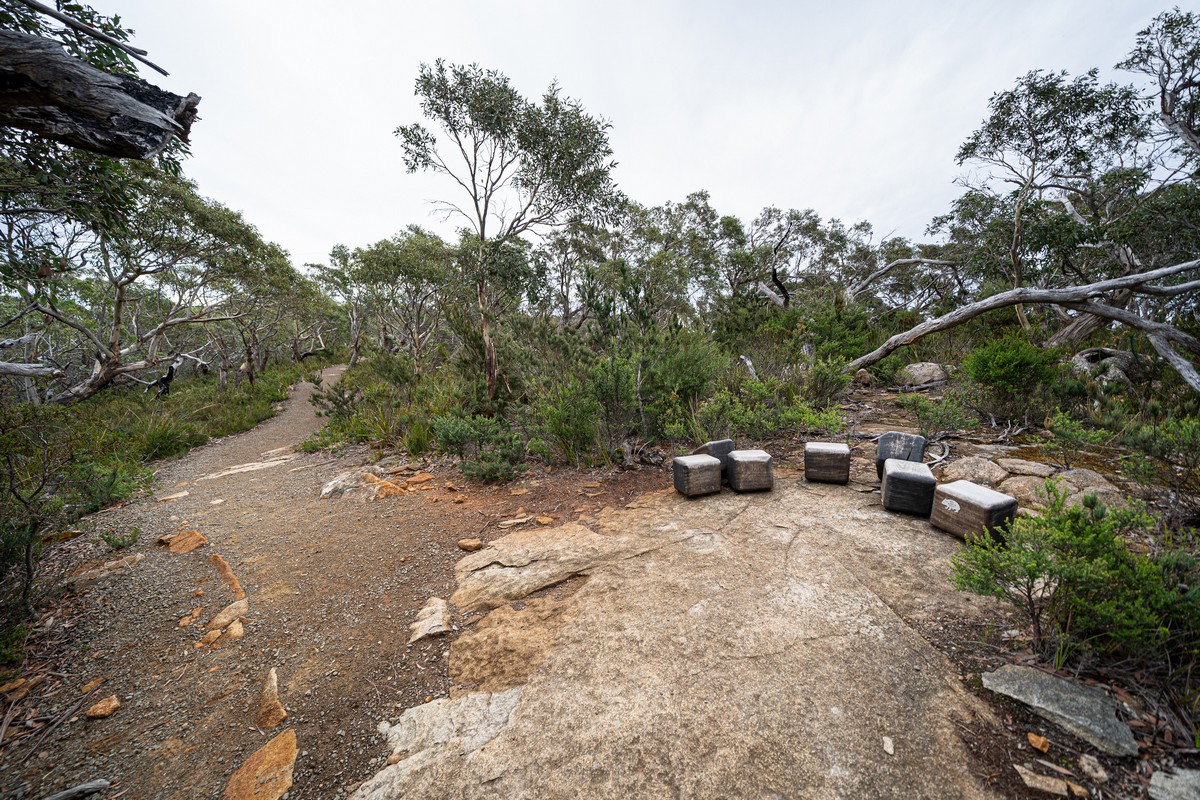 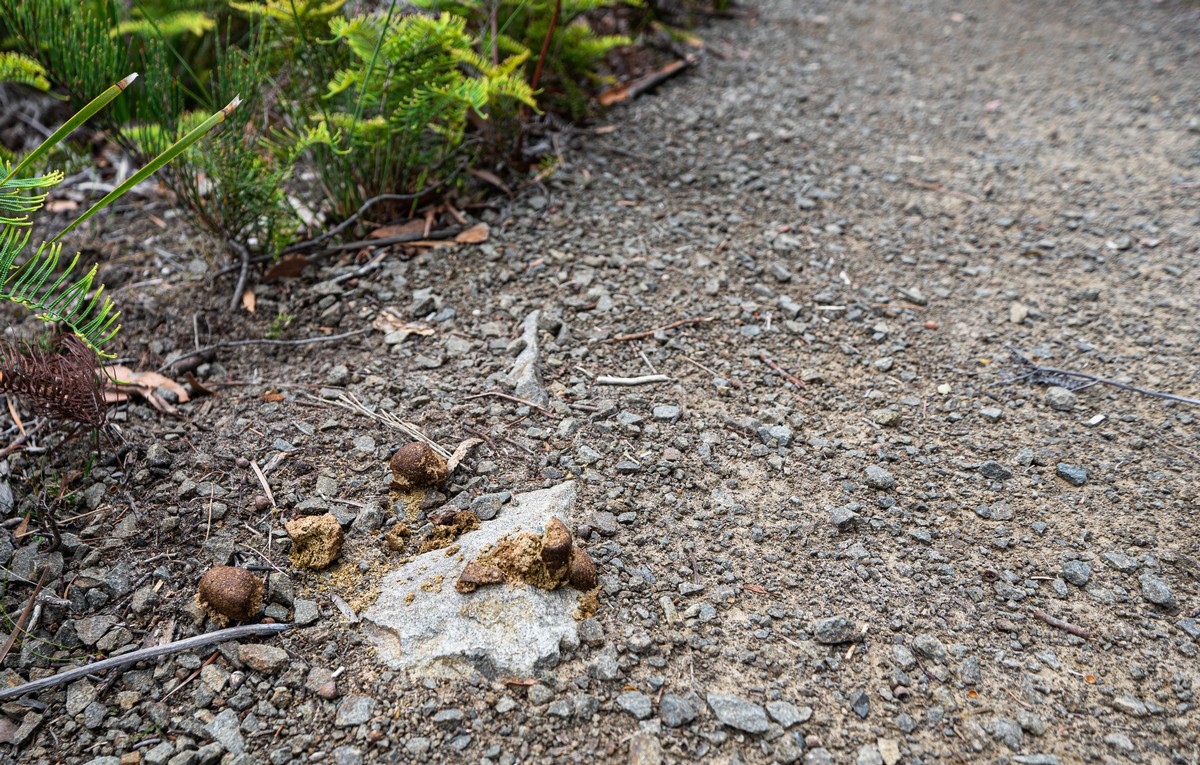 And talking of wombats – that reminds me of something I forgot to mention in my previous Tasmanian chronicles: an unpleasant fact about the local wild animals. Wombats, wallabies and Tasmanian devils – they’re all completely immune… to fear! They use roads as if they own them! Especially at night (a lot of nocturnal species here). Accordingly, the roads have rather a lot of road kill along their sides. Somewhat gruesome. Like the region’s history!

The plentiful road kill reminds me of New Zealand. There it’s a bit different though: rabbits crawl onto the roads there of an evening as they’re so warm; you can guess the rest (.

But I am careful – or lucky ). Not one rabbit knocked over in NZ; not one wombat/wallaby/Tasmanian devil knocked over in Tasmania. A wallaby did try and insist on being struck by our car one night, but I managed to swerve in time.

Meanwhile, we arrive at our first lodgings. And very nice they were too. Blended into the surrounding countryside nicely too… 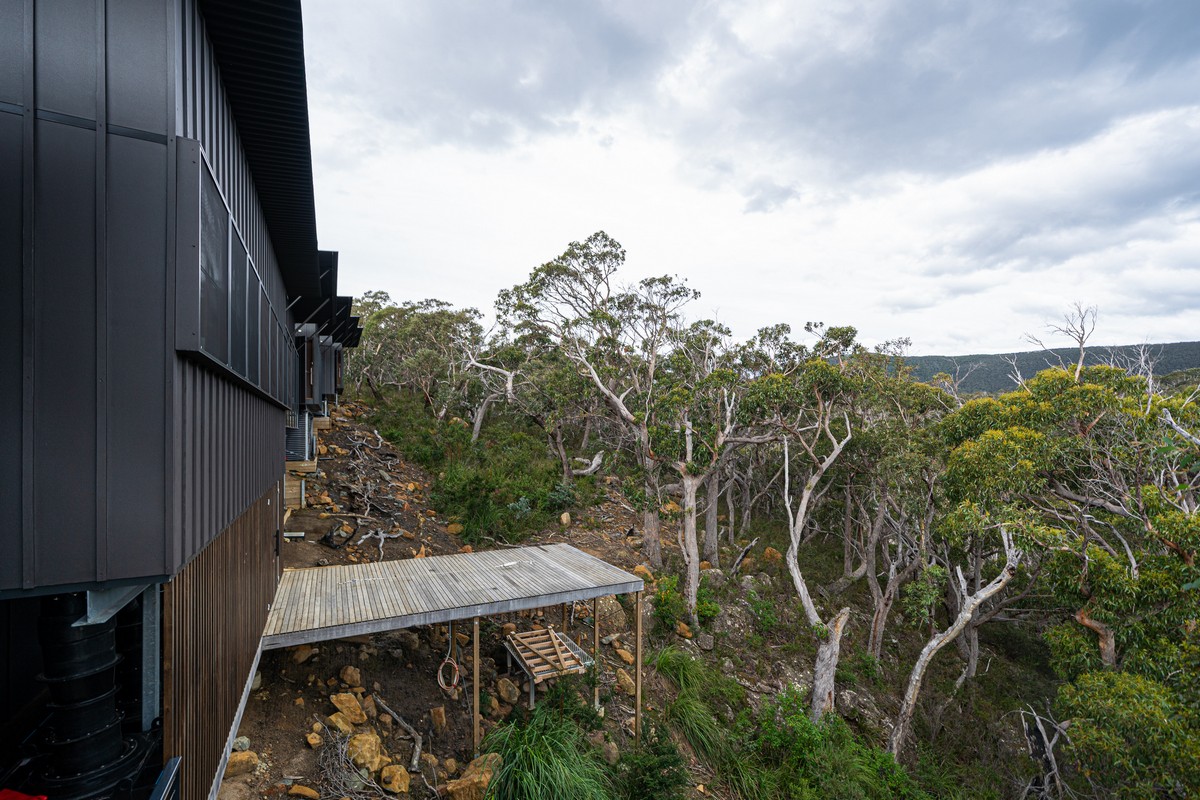 The perfect place to wind down after dinner after a ‘grueling’ day’s trek! -> 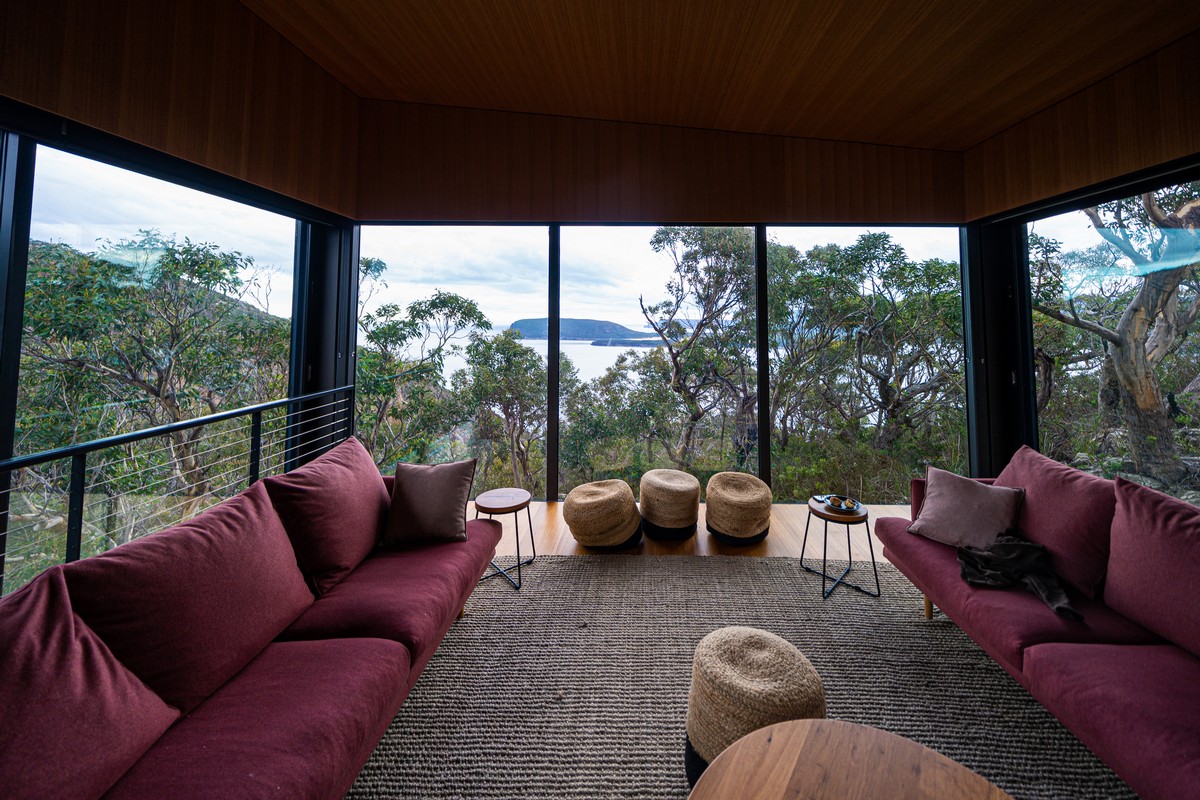 The views here are awesome. But I’ll save those to begin my next post…

The rest of the pics from Tasmania are here.