The islands of Atlasov, Paramushir, and Onekotan – already inspected. So what was next on our southward trajectory along the Kurils? Well, there was plenty to go on: there were another 50+ islands left! However, not all of them are interesting. For example, just south of Onekotan (with its Krenitsyna) there’s the island of Kharimkotan. Here it is in fine weather: 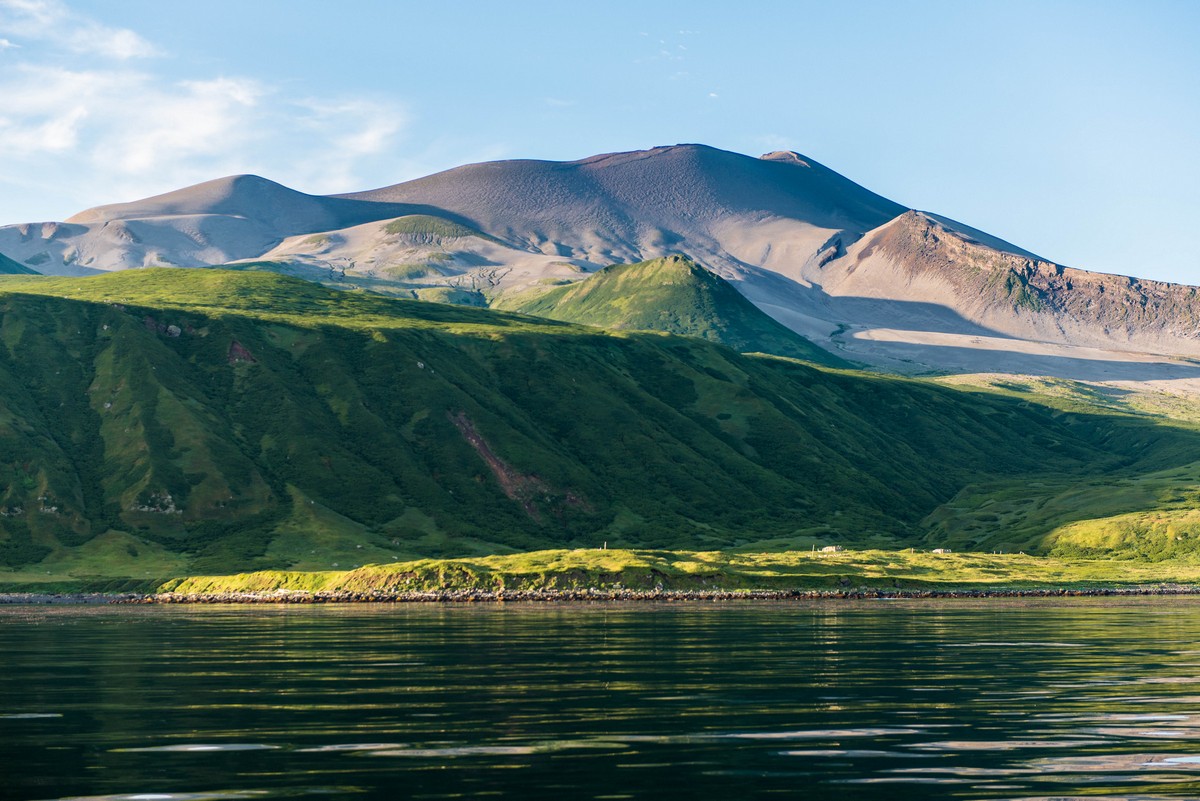 And here it is on Google Maps. 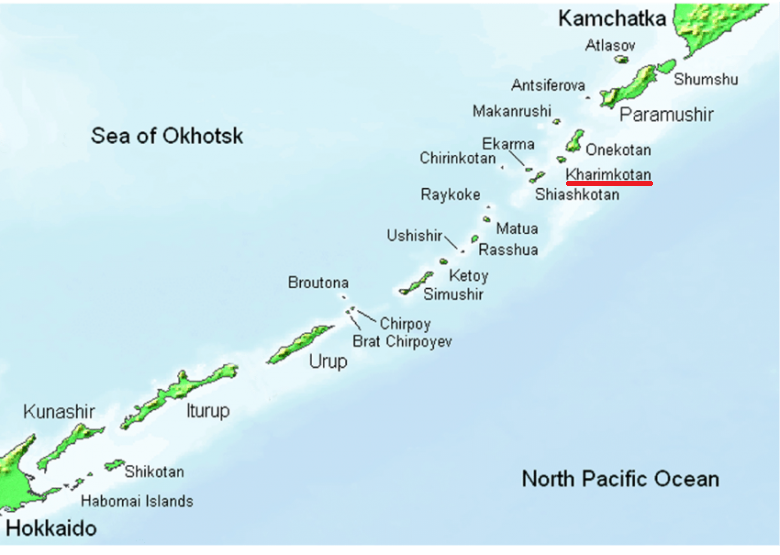 The island’s not all that comfortable, and there’s not much to see on it. I know, as we landed on it last time we were here – in 2014. Here are some photos (copyright and author: D.Z.): 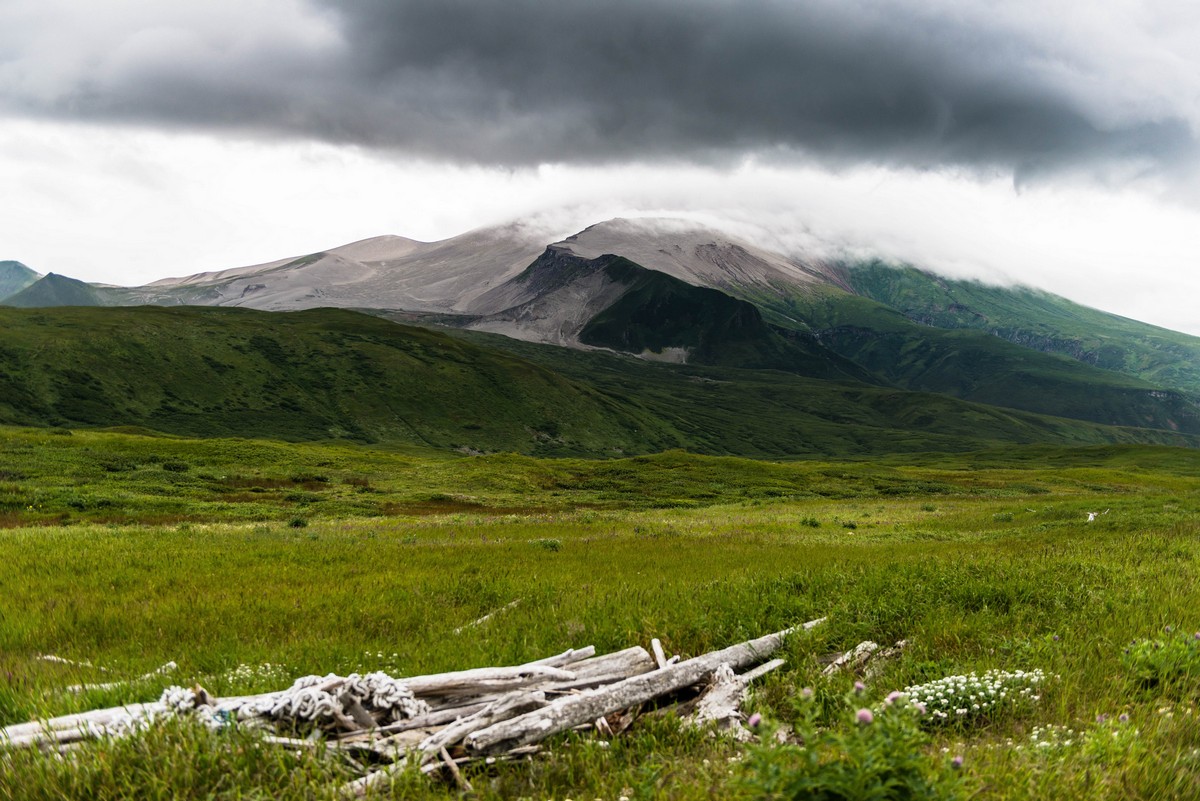 Of course, one could climb to the top of the island’s volcano – Severgina – as it’s not all that tall (a mere 1157 meters), but that’s a full day’s trekking. Still, it might just be worth it; here’s what Wikipedia (Russian page) has to say about it:

And from English Wikipedia:

In short – turns out it is worth closer inspection. But on one condition: a good weather forecast. But this is how things were looking when we arrived:

So, it wasn’t looking too good for a walkabout – let alone a volcano trek.

From last time: a Kurilian still-life by the masterly D.Z.: 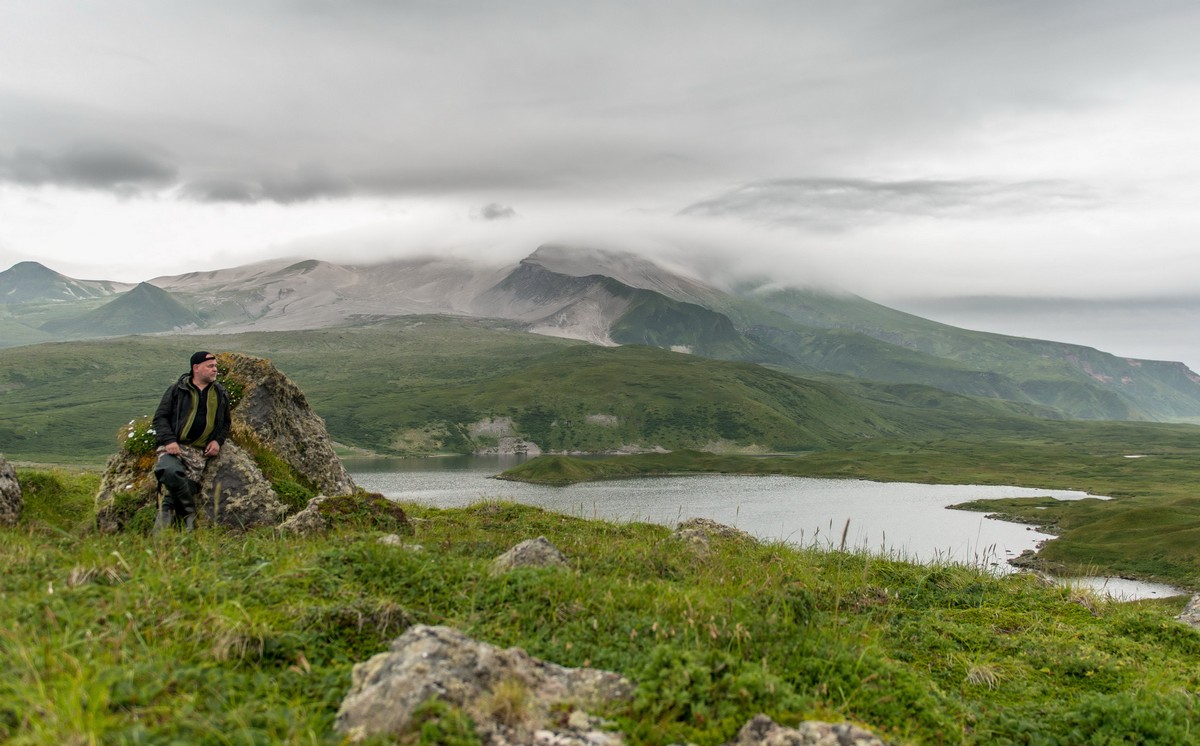 The view of neighboring Onekotan: 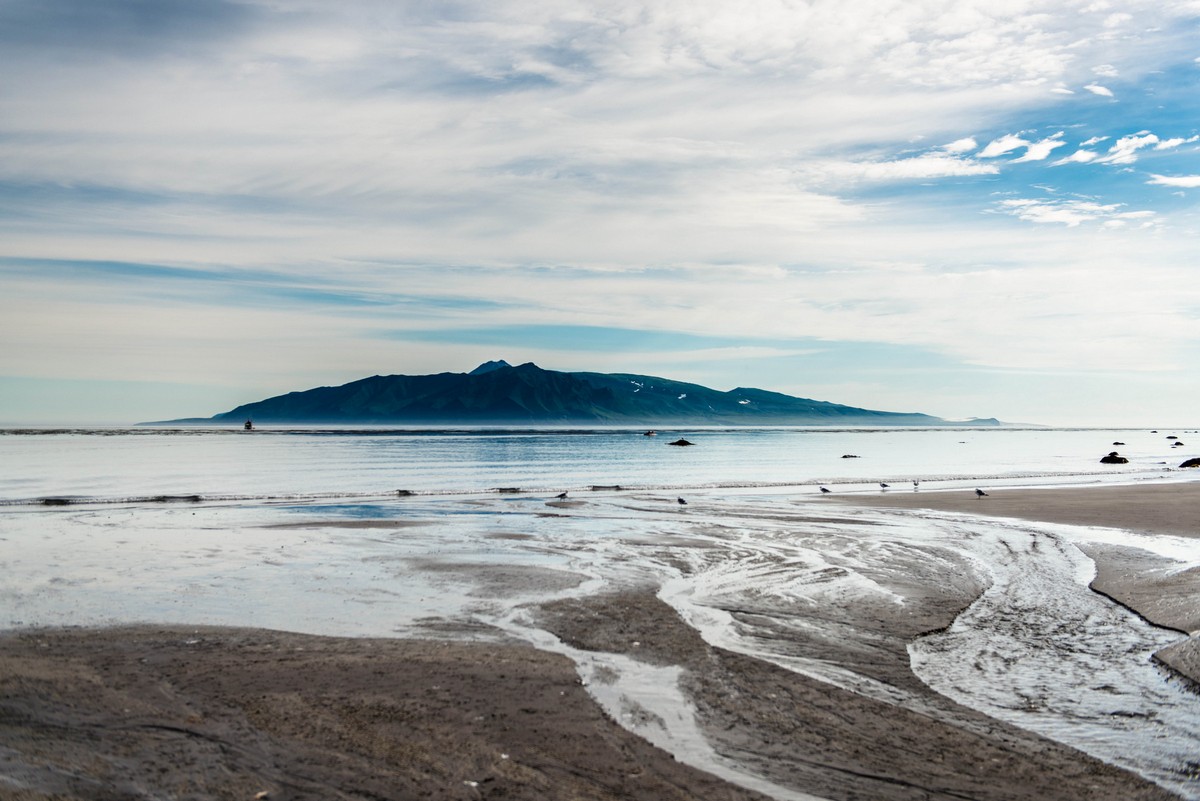 And there’s Krenitsyna behind the caldera! 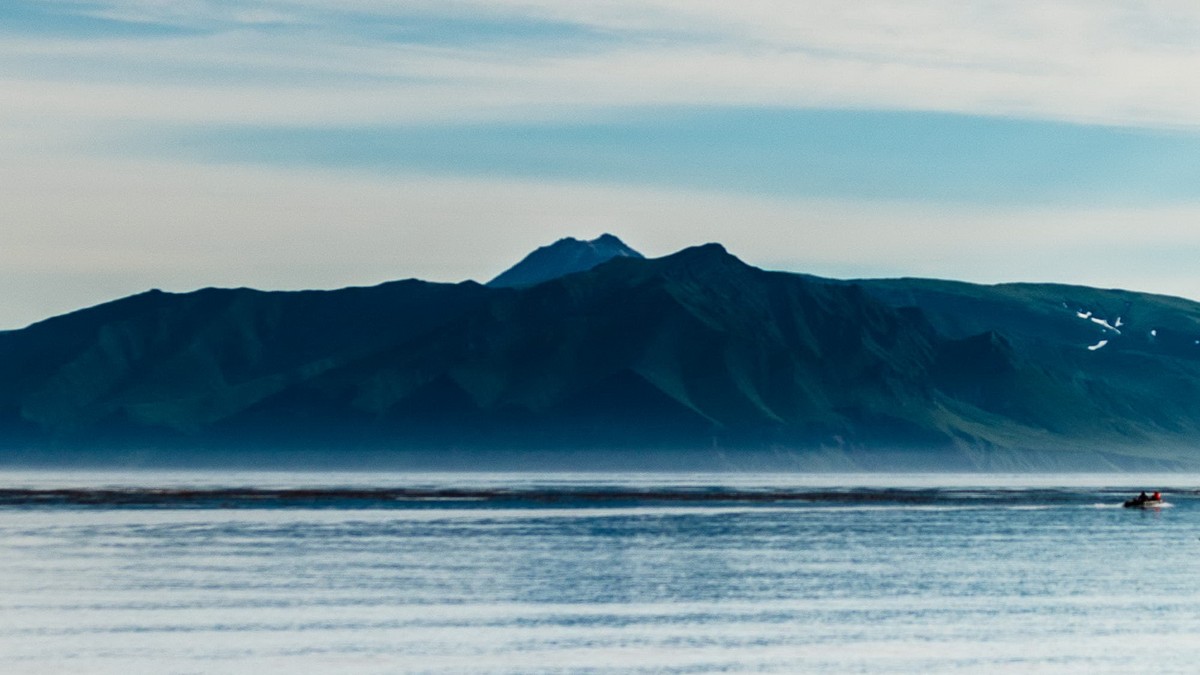 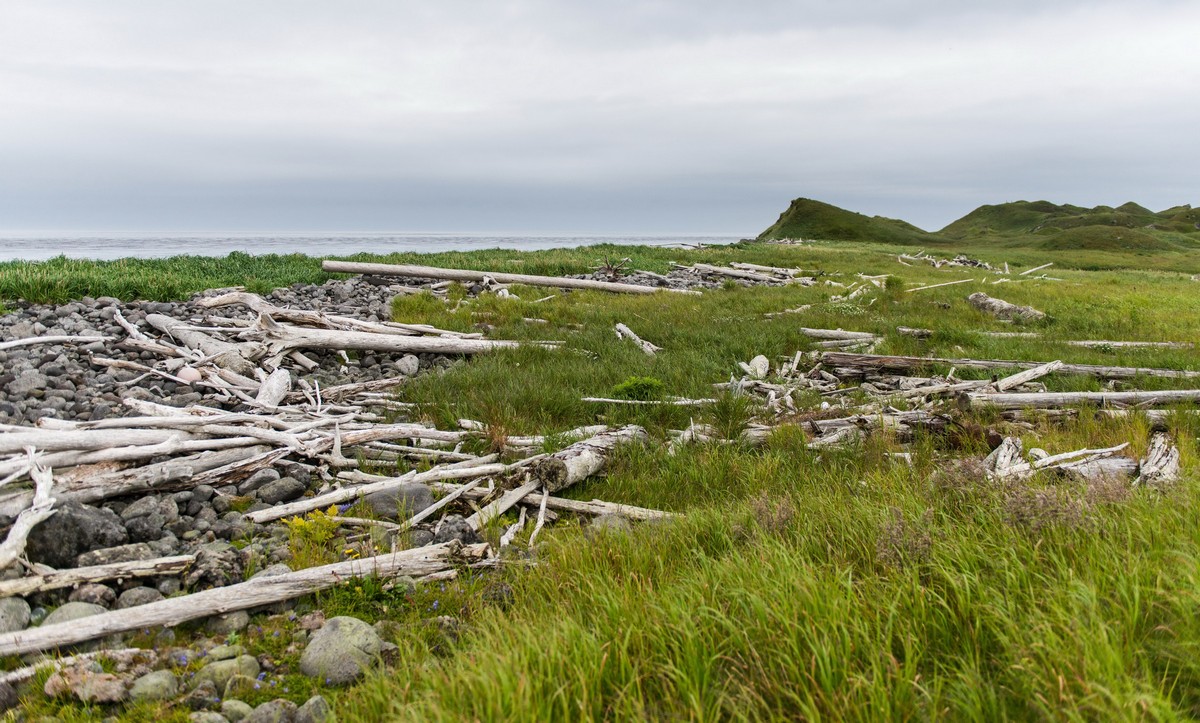 But that’s a morning photo. Later in the day it was overcast and gloomy. To have ventured onto the island and gone up the volcano would have required triggering of the Strategic Stratovolcano Stratagem (aka – pitch a tent, get wet, and wait, wait, wait!). And we didn’t fancy that one bit.

The island’s firewood supply is plentiful: 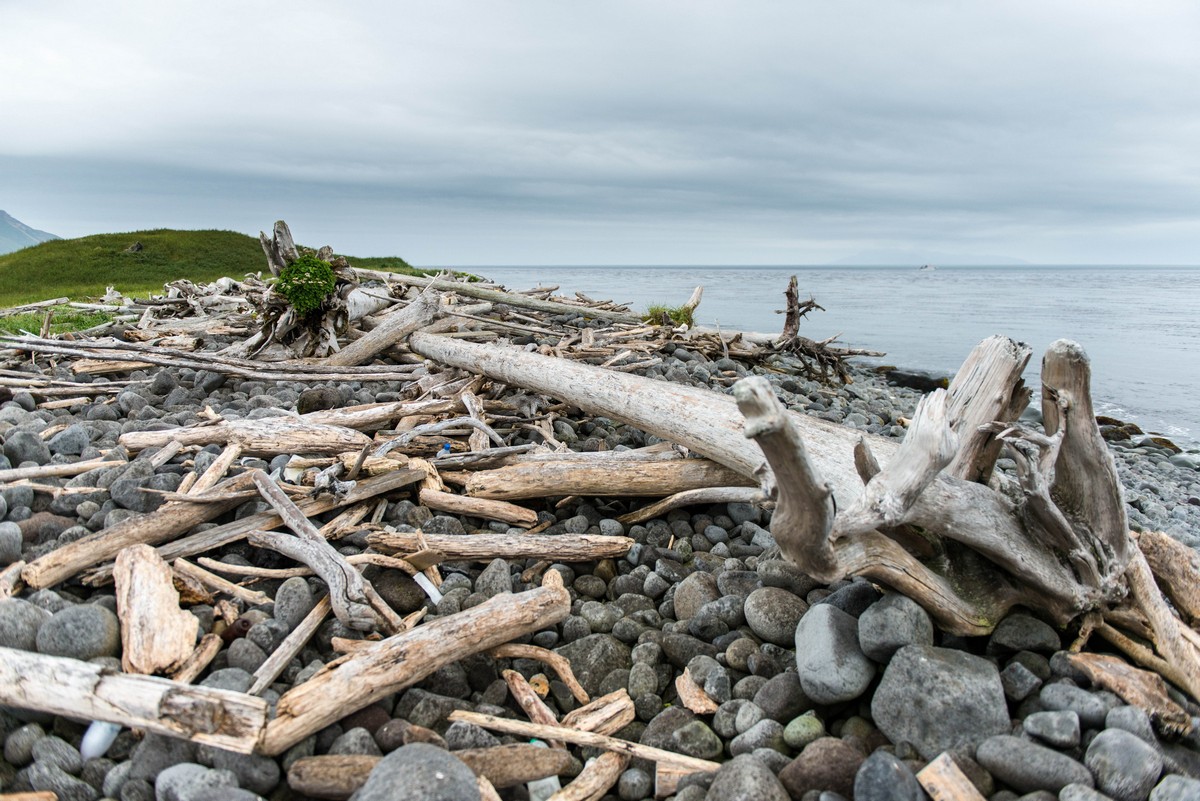 Alas, the island’s supply of… plastic garbage is also plentiful.

// Which reminds me, we’re gradually phasing out the use of plastic cutlery and cups in our office in Moscow. 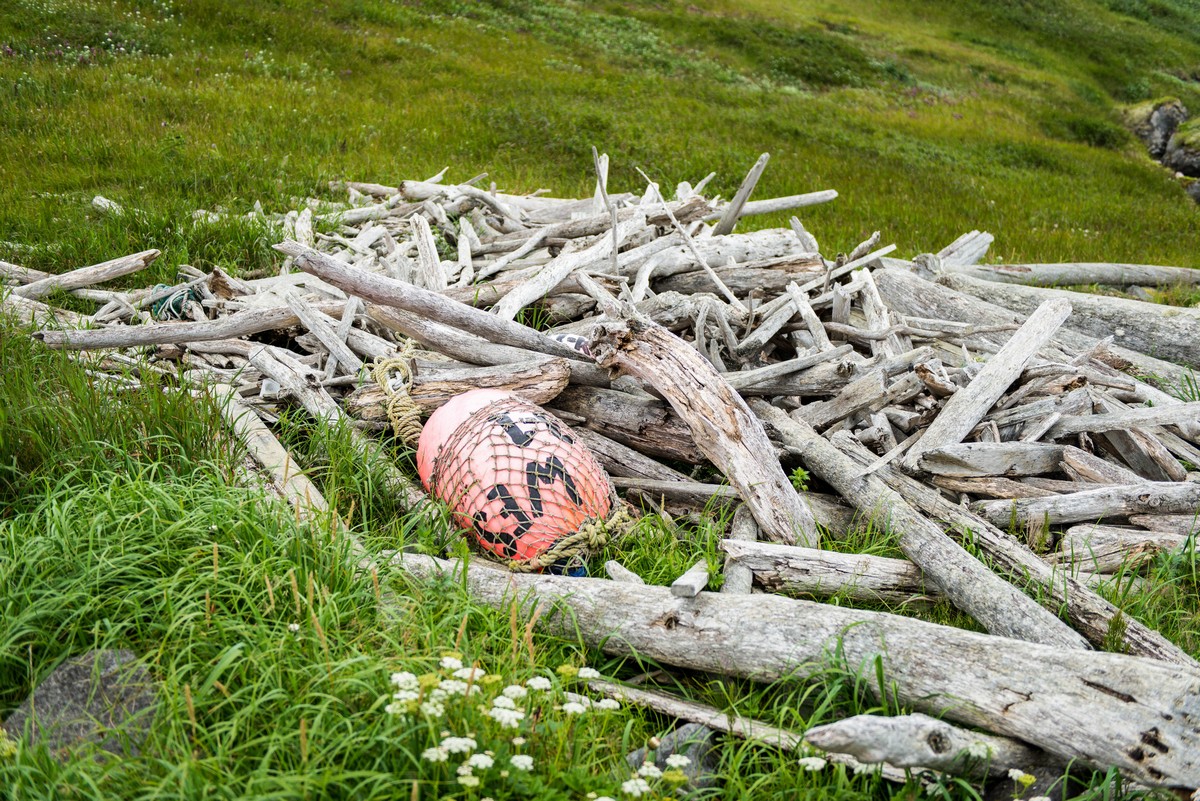 But it’s not just driftwood, plastic trash and buoys that get washed up onto the volcanic shores of the island… 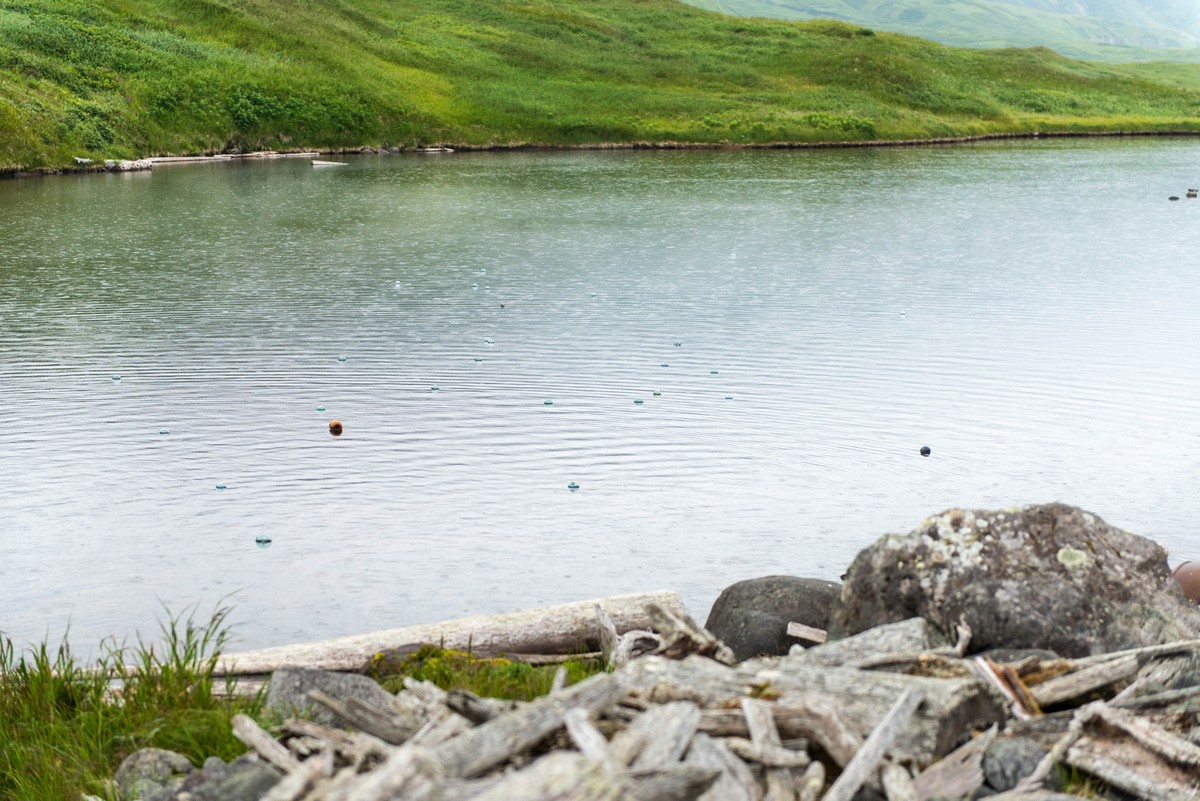 …For a reason I have yet to work out, this island’s shores are densely dotted with… glass balls! Maybe ‘baubles’ would describe these unusual things better. Hmmm, and some dictionaries refer to them as ‘glass floats’. Anyway, they’re attracted to Kharimkotan like… flies to manure – probably due to the island’s being positioned a certain way for sea currents and the wind to drop them specifically here. Of course, those same currents and winds attract all sort of other rubbish from the seas here too, but the glass baubles seem to be a special case… 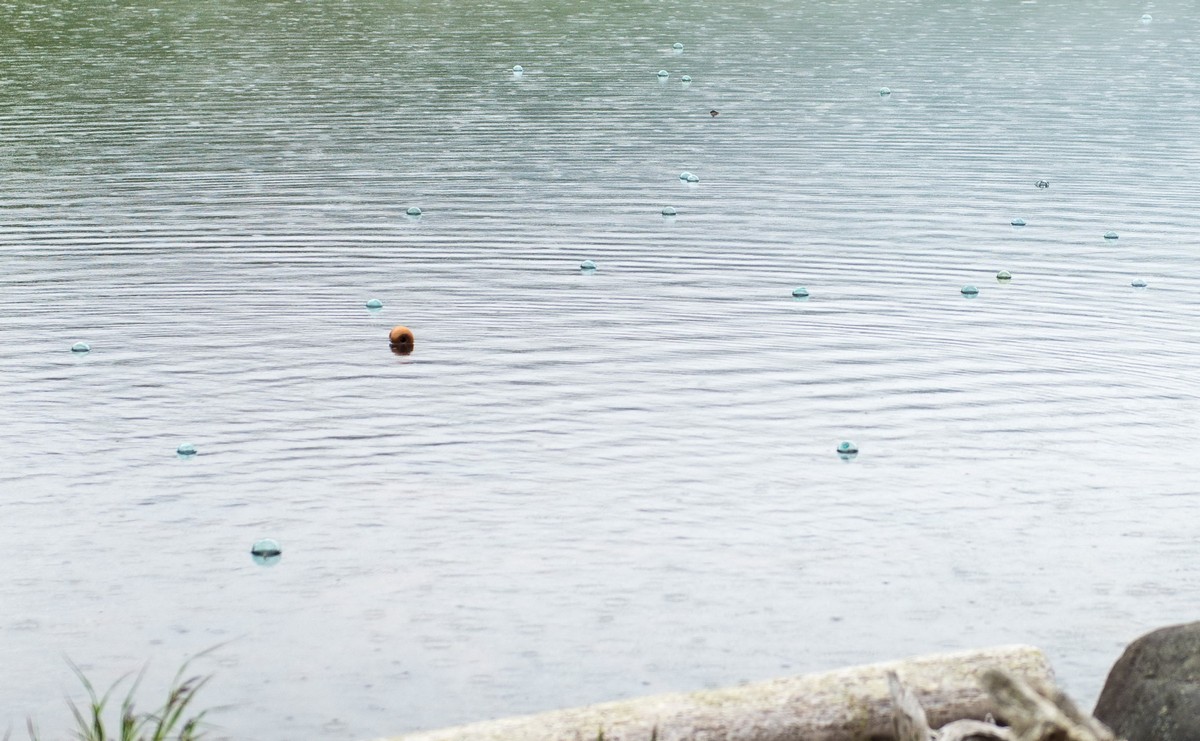 Check these ones out. They’re in a freshwater lake that’s a mere 10 meters from the ocean – separated from it by a thin shoreline. So, that means the balls get thrown over said thin shoreline occasionally during storms. 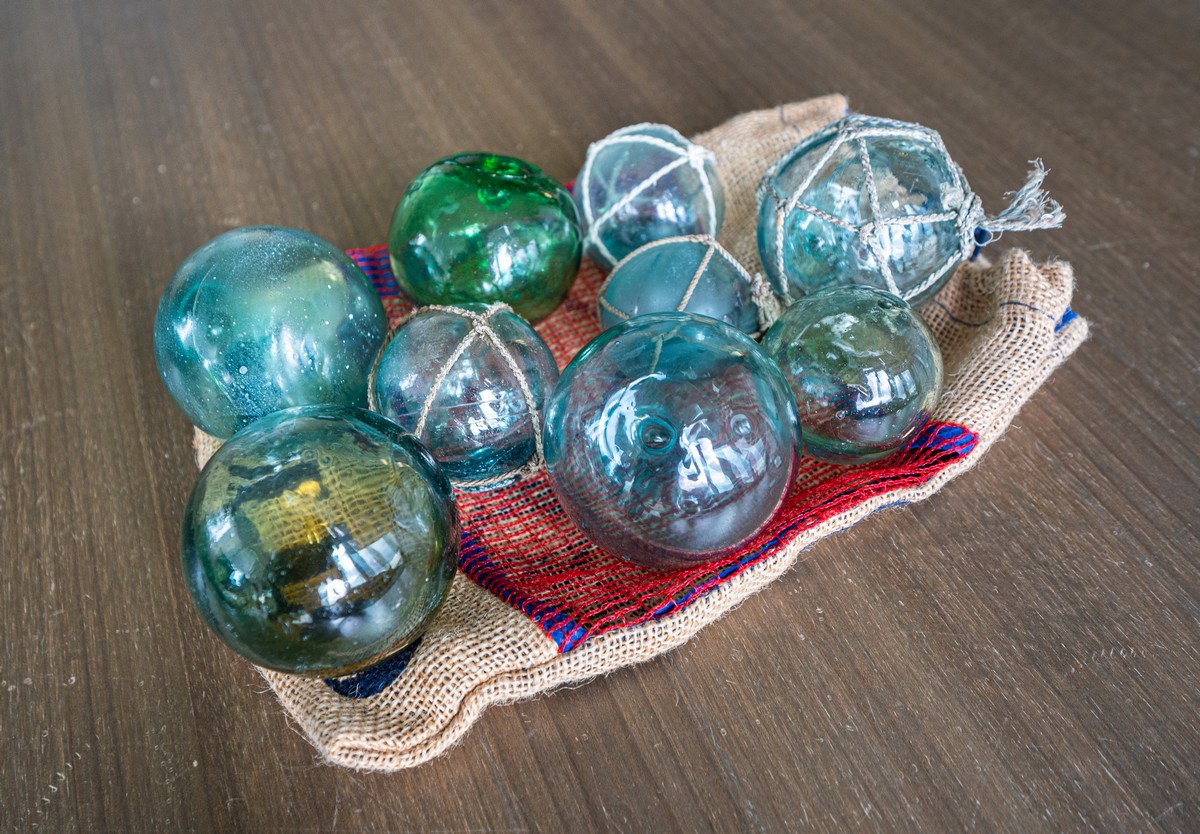 They come in various sizes and colors:

So what exactly are these glass orbs? They’re Japanese fishermen’s floats of old! And there’s quite a story to them…

Once upon a time, long long ago, Homo sapiens bred and multiplied all over the planet. While doing so, it decided that it was not going to obey and serve the existing ecosystem; on the contrary – the ecosystem was going to obey and serve it. Nothing has changed since to this day, but it looks like that might need to change – fast; but I digress. Now, at one point, Homo sapiens stopped pecking at bony scraps of meat with stones, grew fingers, learned to speak, and went on to invent things like plates, cutlery and kitchen utensils. It also invented things like industrial food production, but that was mere thousands of years ago – not millions. In such a way, Homo sapiens became the king of the castle globe – dominating, destroying… and eating anything eventually edible no matter how cute while still alive.

The first floats were made of wood (maybe bones too, no?). Then, centuries later, making them out of glass became cheaper – at least in places like Japan, where trees and the wood therefrom became increasingly scarce (later, a similar crossover would occur: glass > plastic).

And that’s how these glass floating spheres came about. First invented in Norway, the technology spread across Europe and then migrated to the Far East, in particular – to Japan. The Japanese really took to the new idea, and would use any glass – cheap glass, thrown-away glass, smashed glass – to produce the baubles, which would then go inside netting and be used on the large nets used for industrial fishing.

Why so keen? Because, more than a hundred million Japanese inhabited the islands that make up Japan – so a lot of fish were needed every day to keep everyone fed! The result – millions, maybe billions of glass globules were manufactured. And why not? After all the raw material needed was cheap – and there was lots of it. Remember – the Japanese like their sake, which came in bottles: once supped – empty bottle ready for the bin (this was before the idea of recycling). And the bottles were of assorted colors… so the floats made out of them were of assorted colors too. All very logical really. 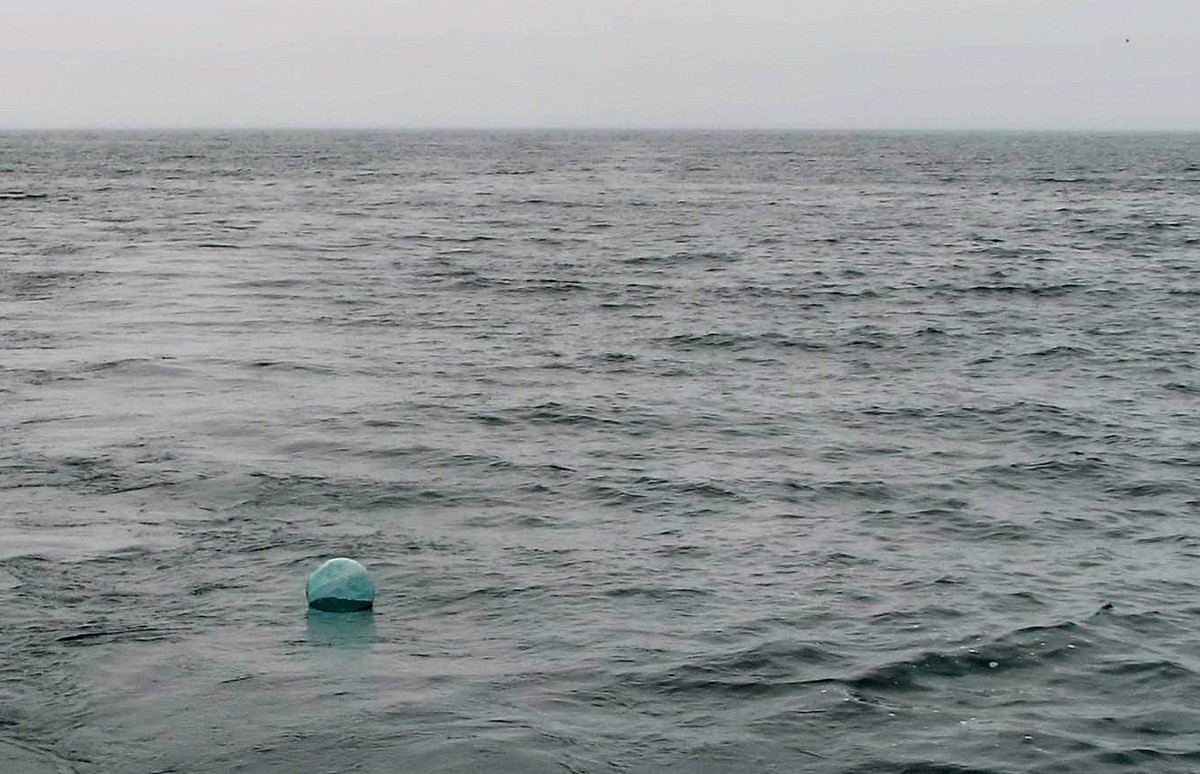 Alas, this big beauty was too big for hand luggage on the flight back home. We had to let it go free!

This was out haul of orbs have our walkabout on Kharimkotan in August 2014. 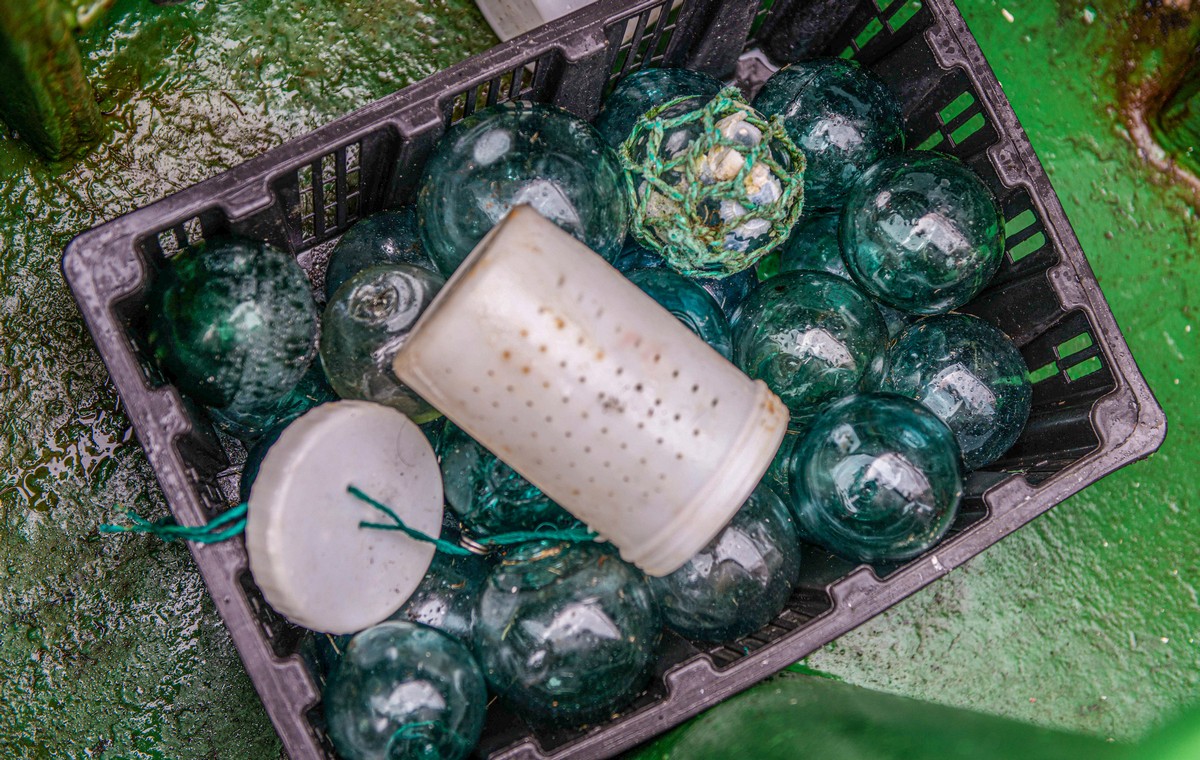 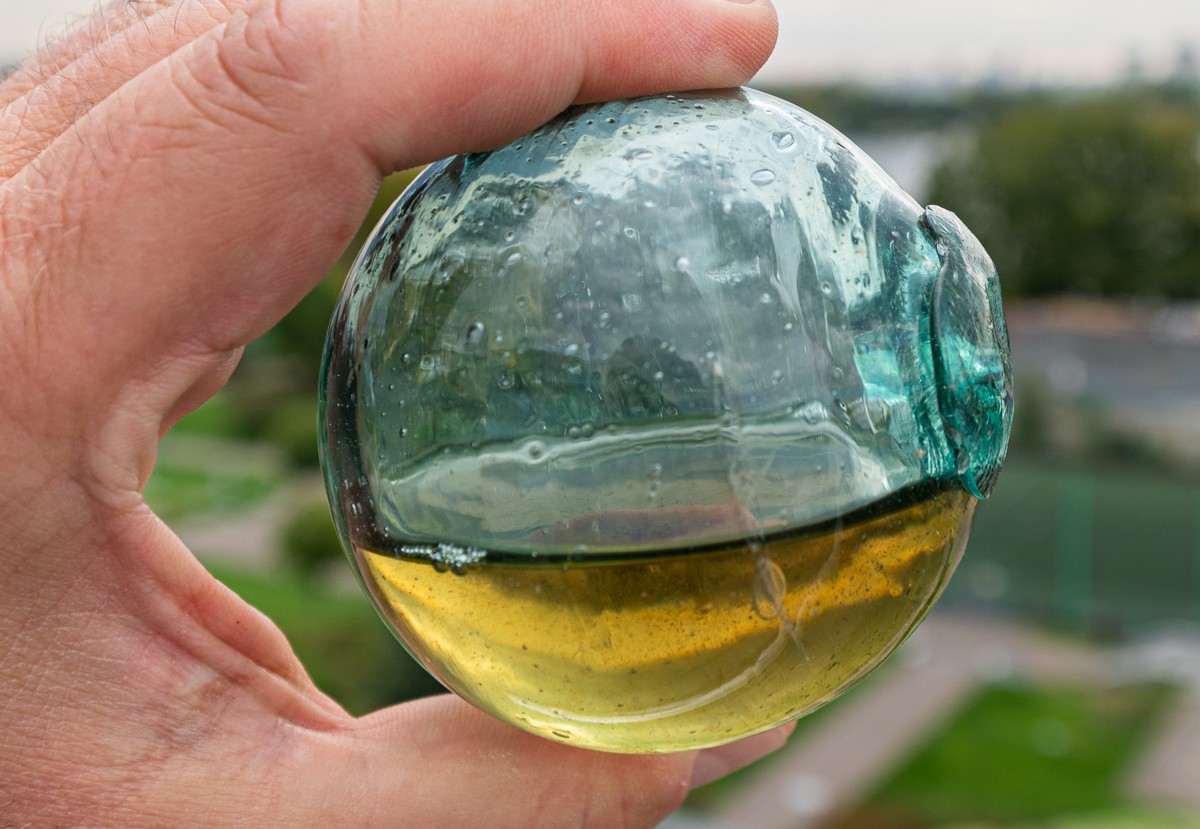 These days, glass isn’t used, but plastic. Which is used for practically everything else today too: kitchens, car interiors, home interiors, furniture, computers, smartphones, TVs, coffee machines, packaging, headphones, watches… aquaparks! So things made of glass – including floats – became a thing of the past – and increasingly collectible too. Besides, they make the perfect birthday present: unusual, mysterious, special, cool, and to be kept on the mantelpiece, surely ). And the recipient may never know what it is (if you don’t tell them:).

Some even have some liquid inside: 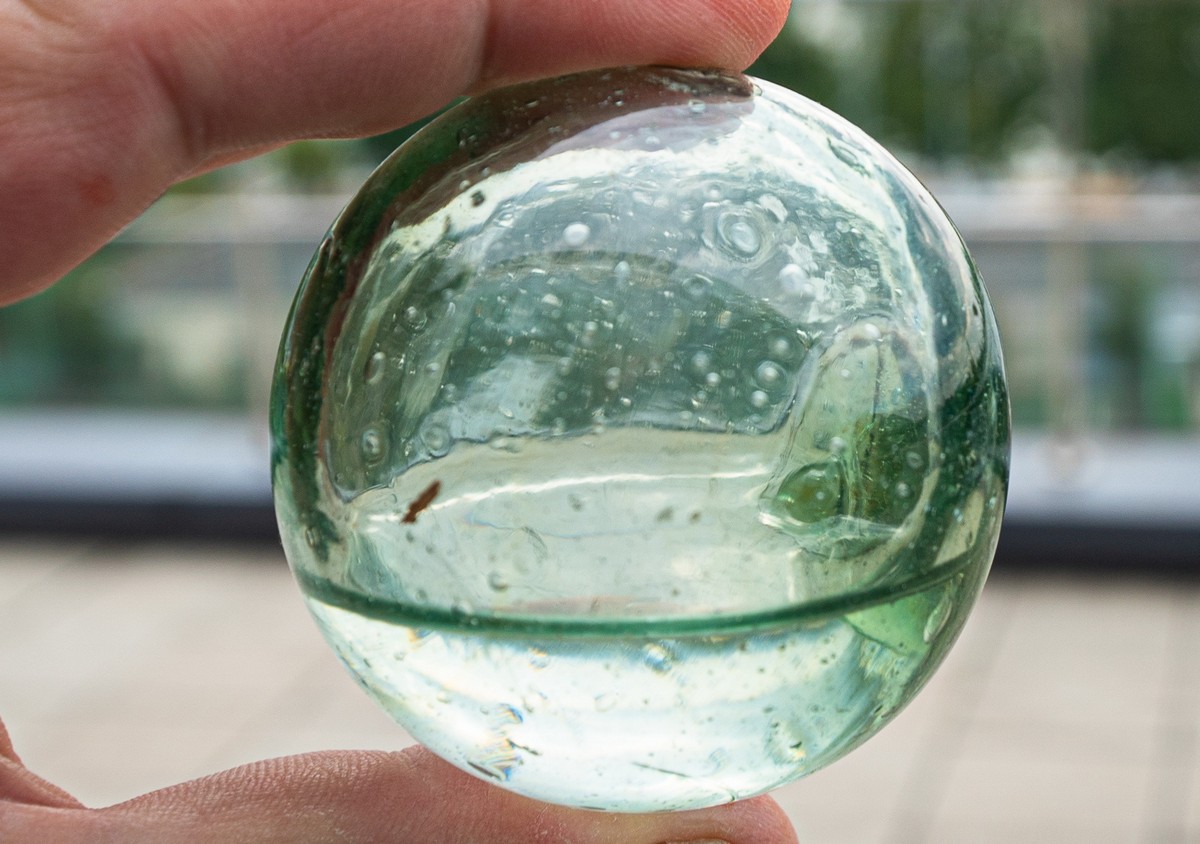 How did that get in there? And what is it? 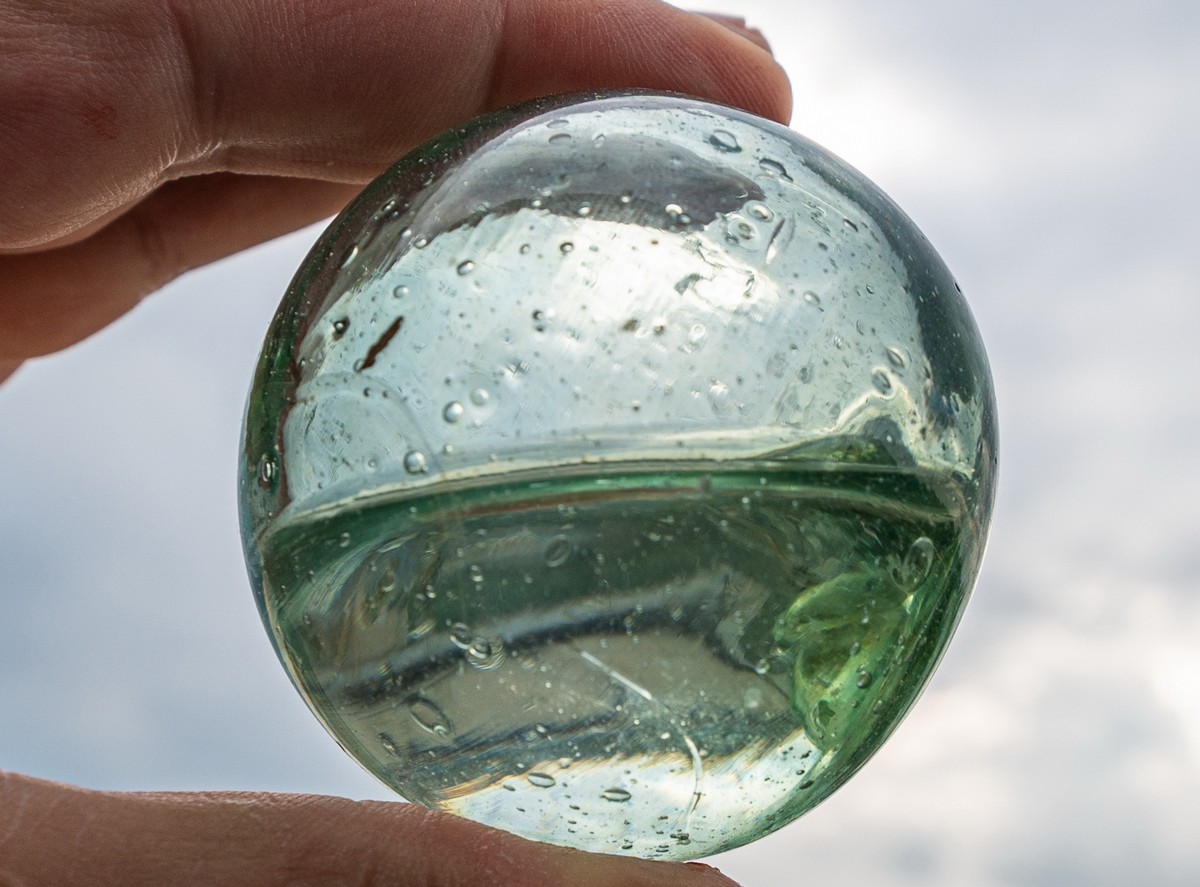 Sure, it’s a liquid of some kind.

Ok, first, a bit of background, or clues, if you like:

The temperature of molten glass is – very high;

The temperature of boiling water – we all know that one.

So, what is that liquid in there? How did it get there? And why?!

Try to work it out yourself! No internet!!

These round glass bulbs – just trash really left over from yesteryear, right? Well, it depends. A very special one – an unusual or rare one – can sell these days for one, two or three thousand dollars! What? Is this some kind of regression on the part of Homo sapiens? Going backwards to more a primitive, perfectly illogical form of human life? Could be. But then, it’s not only glass balls made of waste glass hundreds of years ago that are collected, adored, coveted, and paid silly amounts of money for: the same goes for: old stamps, matchboxes… back scratchers…… toenail clippings! Not just regression. Going completely round the bend!

But back to balls: if one has a defect – that means it’s unique – rare – and that makes it much, much more expensive! It’s like the Rolexes that had two ‘9’ figures on their face – the second one where the ‘3’ should have been. That defect means those particular watches (not that many were made with the defect) are now highly-sought, highly-priced collector’s pieces!

More balls: check this one. See the defect? 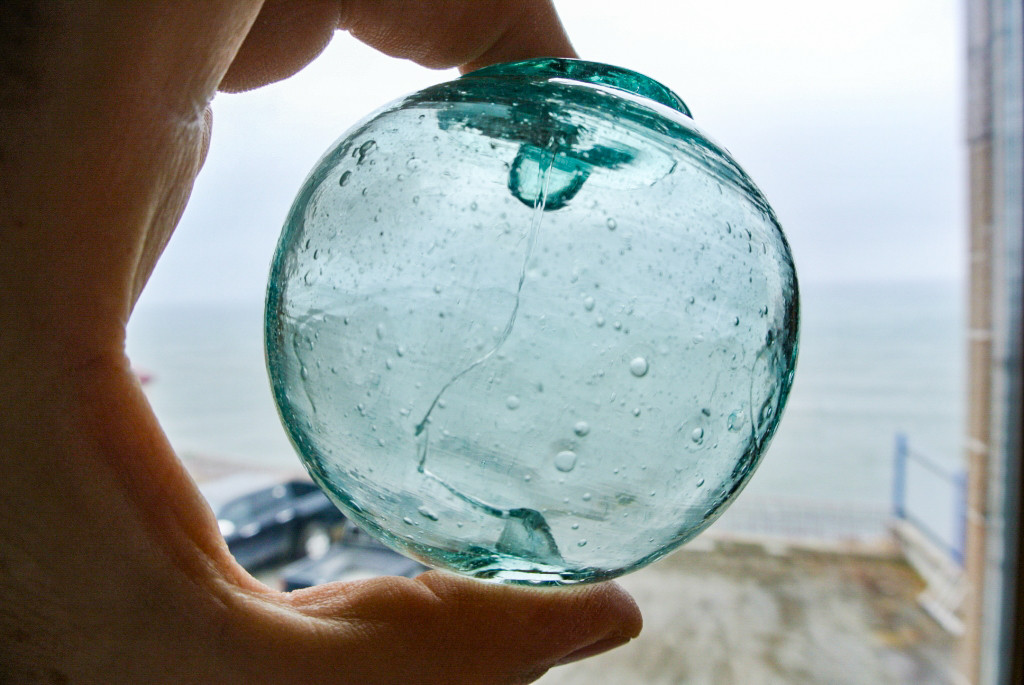 The crack in the glass? ‘Collectors item’! 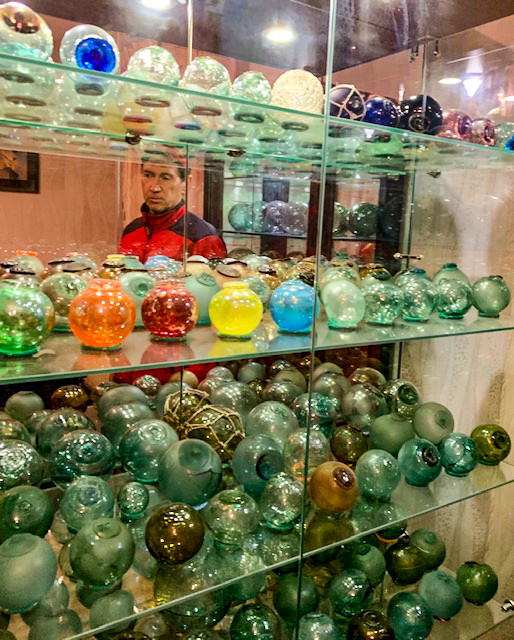 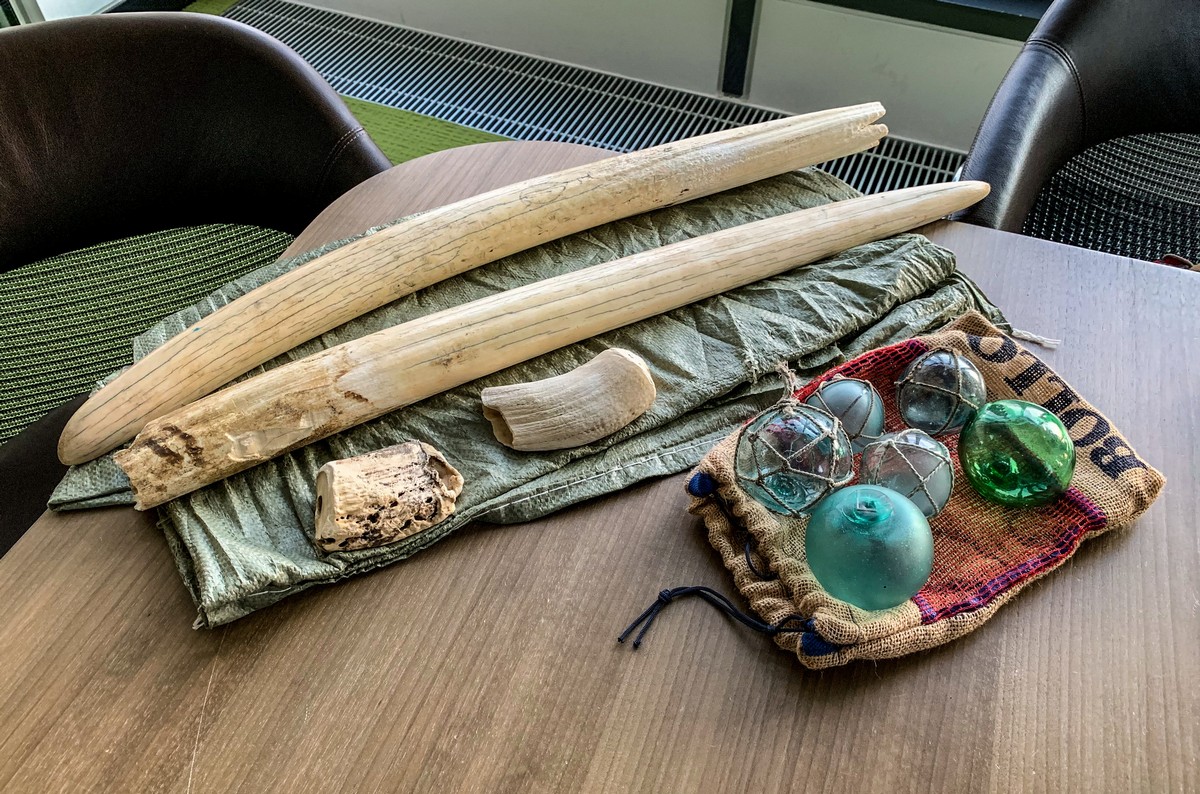 Back at the Kurils – we head further south. It’ll be a bit boring from here on, as not much of particular note occurred. A few tasters: 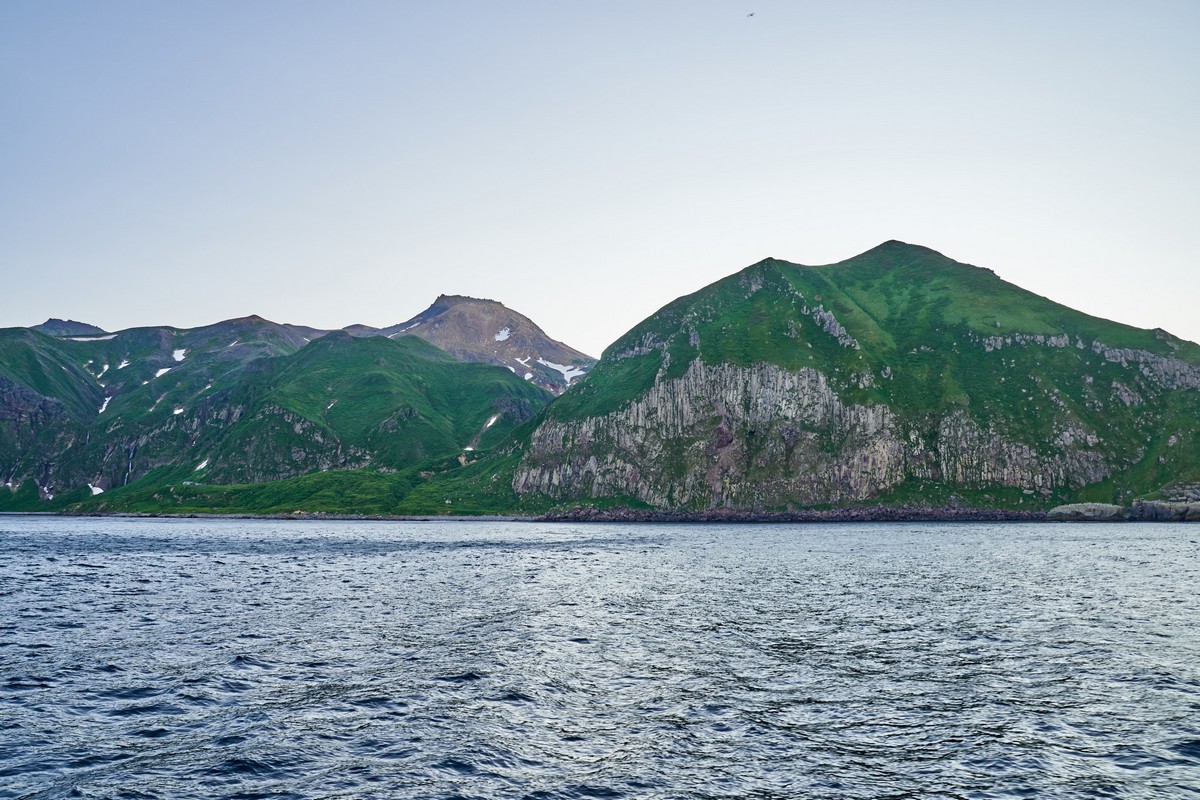 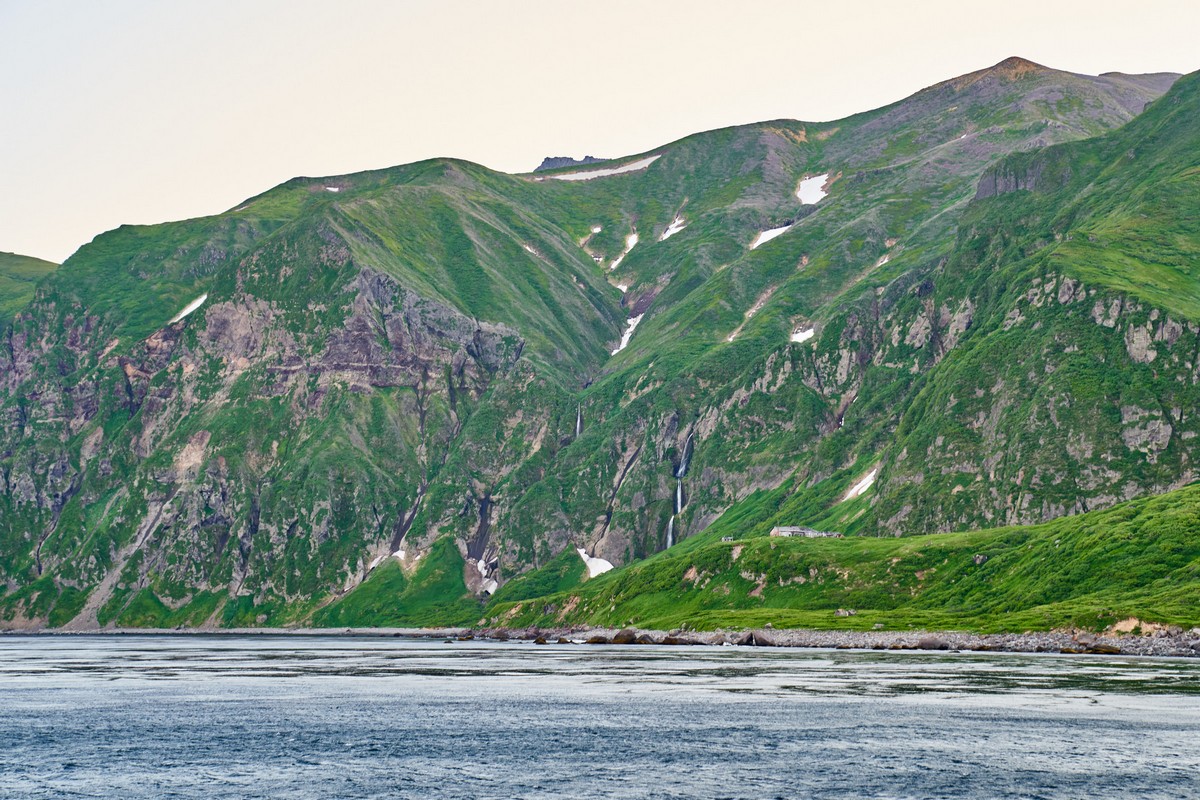 Waterfalls and abandoned customs post, and lenticular clouds in the clear evening sky: