And now for another installment about the Azores.

But this time with a difference: what NOT to do in the Azores.

It’s probably not worth going to watch the whales in June, despite the fact that it’s advertised as a ‘must’ for tourists. We fell for it a little … And we only saw one part of one whale – namely, the dorsal fin of a sei whale. After two hours of chasing, that was it as far as Azorean whales were concerned. If it’s whales you’re after, check out my Antarctic stories.

But there were some revelations! I saw my first Portuguese man o’ war! This is a very poisonous jelly-like thing with a bubble on the surface of the water, which is not that deadly for humans, but leaves nasty burns on the skin (look for pictures of victims yourself – it makes me feel a bit squeamish even describing it).

Note, this is not a jellyfish! It’s a colony of different organisms in a symbiotic relationship that’s designed to cause pain and death to anything in its vicinity. Read the wiki page at the link above, it’s amazing. It’s worth it just for bizarre phrases like gonophores, vestigial siphosomal nectophores and gastrozooids with tentacles!

Anyway, here’s a Portuguese man o’ war for you, swimming next to our boat: 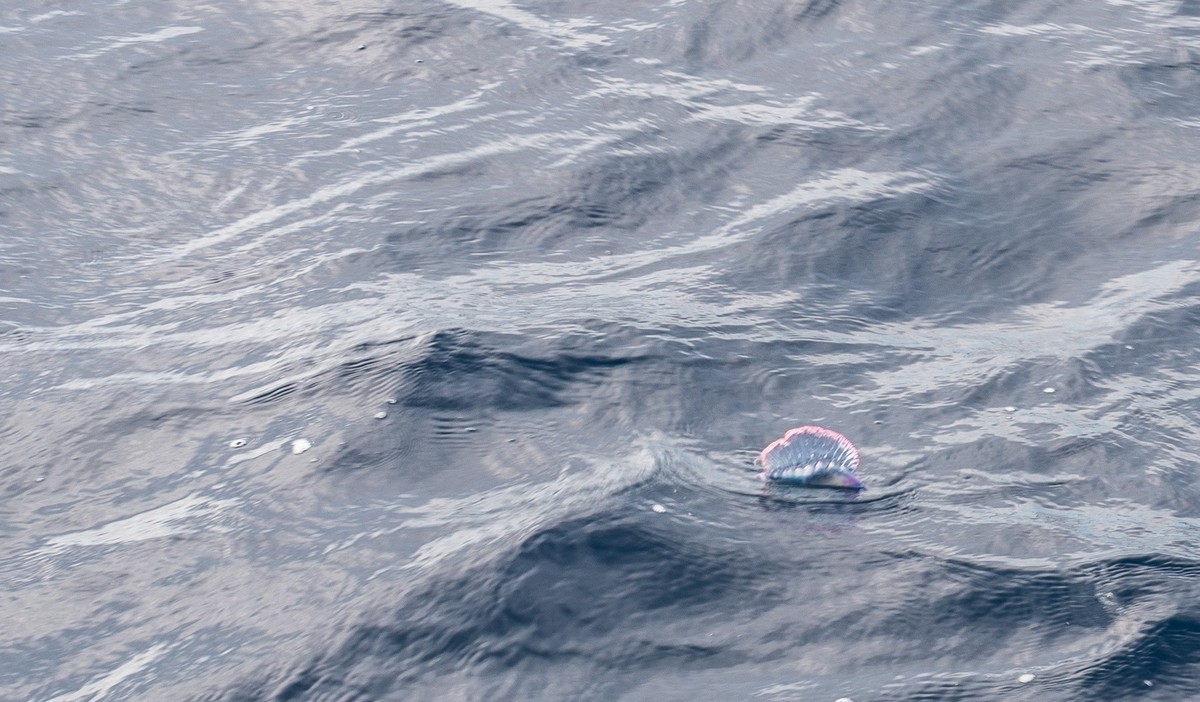 But no whales, killer whales, dolphins, or penguins. Even the flying fish seemed to have flown south. I had to take photos of homo sapiens instead. There were plenty of them ->

But – hooray! – a pod of dolphins appeared, gave us a quick once-over and, with a swish of tails, shot out to sea, with their cheery dolphin whistles, shouts and other underwater whooping (or at least that’s how I imagined it).

In summing up the trip to the Azorean island of San Miguel, I have to mention the absolutely charming mini-volcanic island called Ilheu de Vila. It’s here on Google Maps and Yandex maps. Here’s a view from above: target=”_blank” 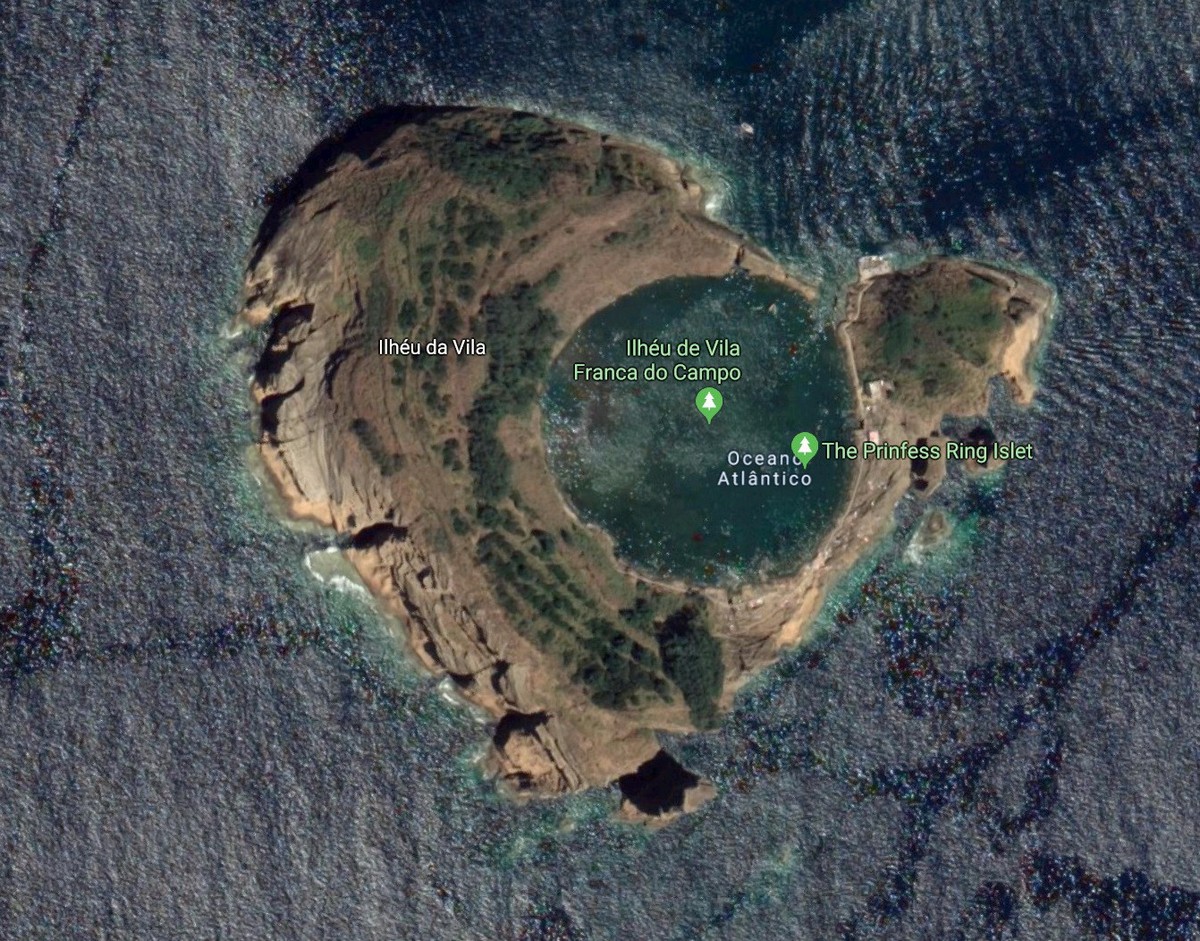 By the way, there was some kind of diving competition here the day before we arrived. The people in the photos are dismantling some sort of wooden platform. Look it up if you’re interested. All I wanted to do is show the island from the sea – from all possible angles. Enjoy ->

The Azores … Or rather, just one of the islands, Sao Miguel, where we were able to spend three and a half days with a group of random fellow travelers. I recommend it. Just a pity it’s not that easy to reach. If you’re flying directly to these magical islands from Europe, the direct flight is up to 6+ hours.

There’s no doubt that these are volcanic islands. You can see it from the lava shelves, from the rocks cut off by the sea, from the neat cones on the hills (and if you look closely, there are also cracks in the ground … about to erupt maybe?), oh, and the internet says they are volcanoes! They erupted recently, and will definitely do so again, soon and irrevocably.

Due to this volcanic nature – in conditions of increased precipitation – one of the most frequent types of natural disaster here is landslides. For example, the spa at Ferraria is closed to the public due to a recent landslide and they say it could occur again at any time. 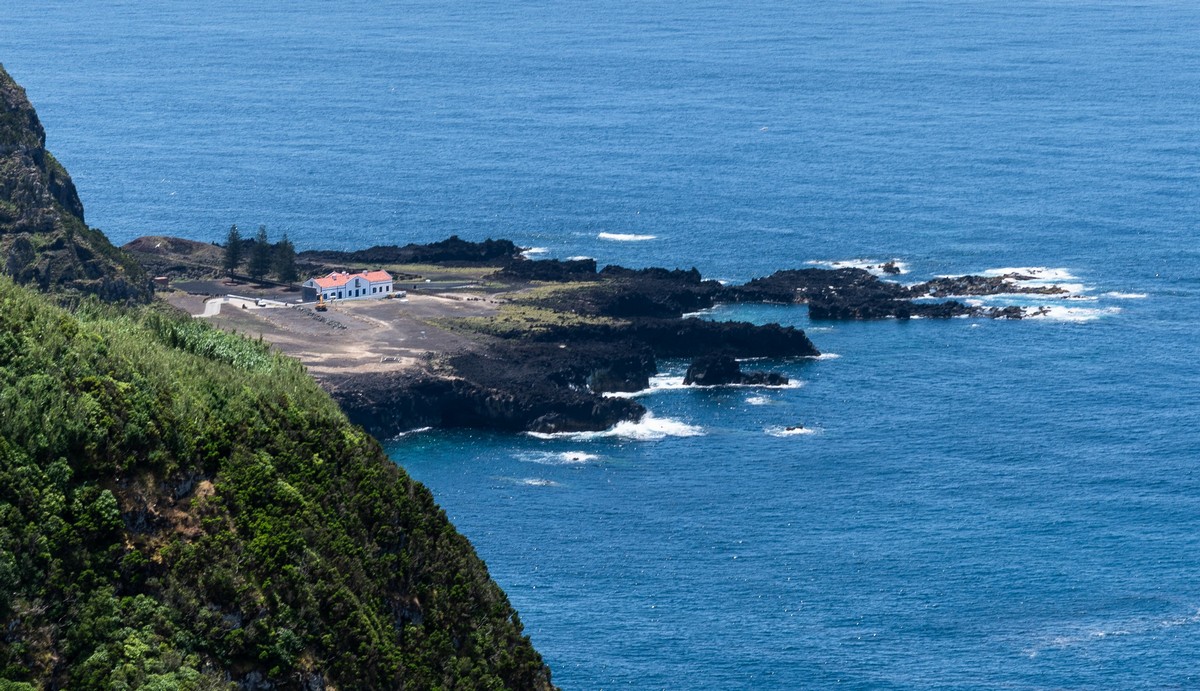 By the way, there was a post on our fan club forum about this place:

“It’s a pity you didn’t make it to Ferraria, because it’s not just hot springs but the ocean is hot too, that is, there are hot springs in the open water. No idea where else in the world you can find entertainment like that …”

That’s all from the Azores! Until the next visit …

The rest of the photos from the Azores can be found here.