Who’s heard of the Faroe Islands?

Ok, and who can point them out on a world map? I reckon not all that many. But that’s just wrong! Because these islands are so mandatorily categorically must-see – if only via photographs on a blog on the internet. So here you are folks – plenty of pics of these wonderful remote islands…

First, back to the geography lesson…

Where are they? They’re somewhere in the middle of an imaginary triangle drawn between Norway, Scotland and Iceland; here: 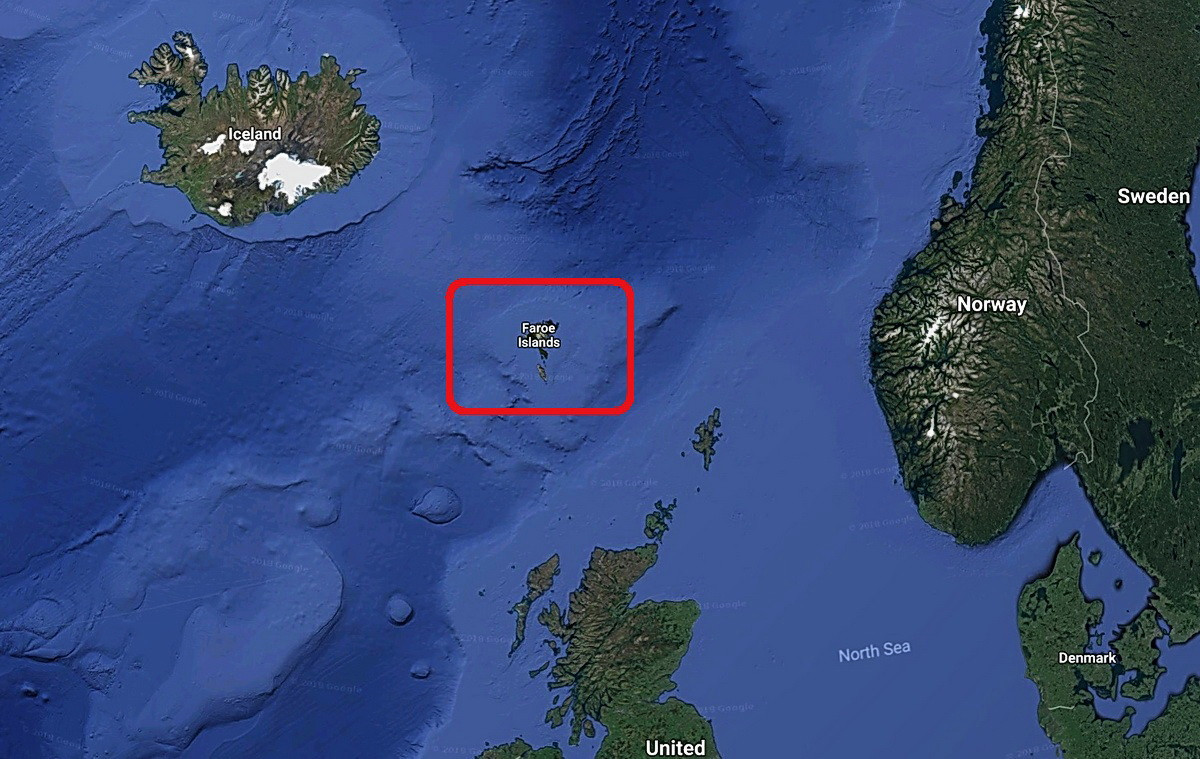 As you can see in the satellite pic above, the islands are small – the internet tells me about half the size of Luxembourg, or twice that of Singapore. The net also tells me – woah! – its GDP is just below Japan’s and more than the average for the EU (more than Spain or Italy, but less than France or the UK)! However, as I recall from what locals told me, around 25% of the islands’ budget is subsidized by Denmark; that is, on their own, the islands aren’t self-sufficient.

Now, the internet also tells me that the weather here is generally poor. But I object to this! See, the islands are situated practically in the middle of the Gulf Stream, so, though they’re very northern in terms of latitude, it never gets really cold as it does normally this far north. Not that it gets all that warm either. But what it does have is an extraordinarily stable climate: it gets down to around +5°C in the winter, and up to around +15°C in the summer. More internet fibs: its always foggy and overcast here and it rains 300 days a year. Again: objection your honor!

Clearly this is an anti-Faroese conspiracy arranged by other beautiful and sunny islands, like those in the Bahamas, the Caribbean, or even Fiji or French Polynesia. For these here Faroe islands are very clearly very sunny islands – among the most beautiful sunny islands I’ve seen under a clear blue sky; plus there’s a bonus: in summer the sun hardly sets of a night!

Check this place out for yourself:

Just to give you an idea of quite how impressed I was with the Faroes, let me tell you how I took so many photos that, even after editing, I was only able to whittle the total down to 227 pics! So get the popcorn in folks, it’ll be worth it…

Meanwhile, off we fly to the Faroes…

There are plenty of flights here – including from Copenhagen, which is where we flew from. The flight takes two hours.

Surprisingly, non-EU residents require a Faroe visa; at least formally. We all had one, but in the end no one checked if we had one in our passports upon landing. No stamp was placed in the passport either! Laid back passport control: we weren’t complaining ).

Here we are up in the plane approaching the Faroes:

We landed at the only airport on the islands – Vágar, built by the British during its brief, friendly ‘occupation’ during WWII, incidentally. Our first surprise came before our feet touched Faroe ground: we left the plane to the right! Ever seen that? Probably not… 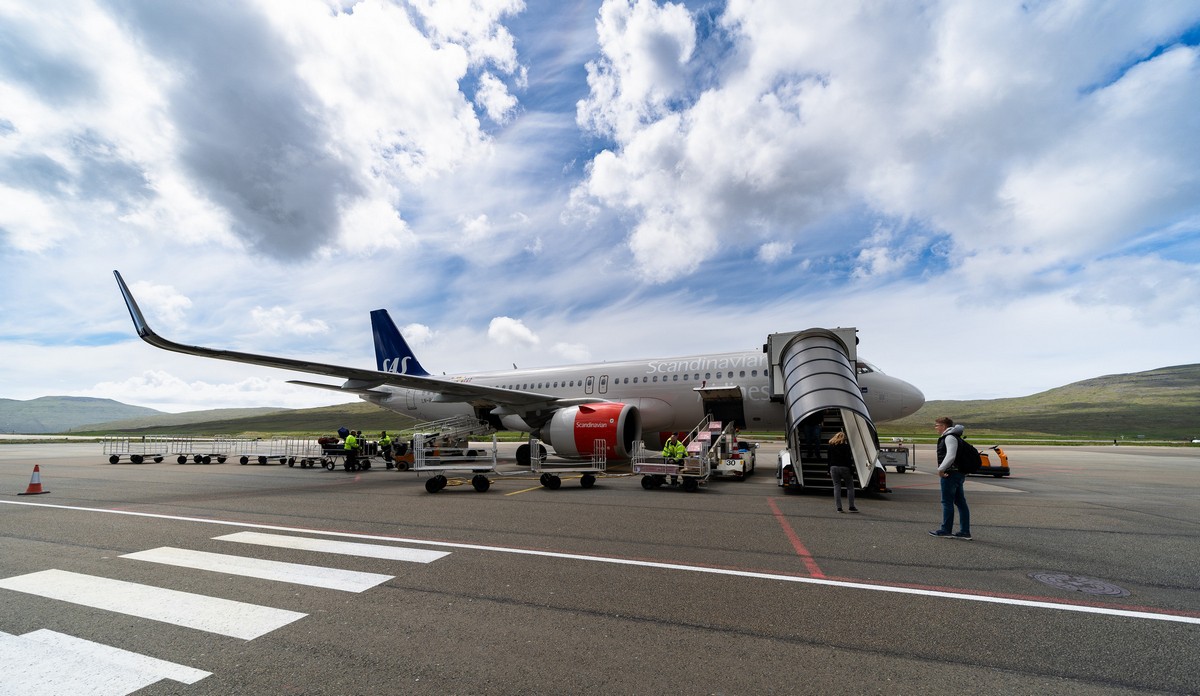 Yep, leaving a plane to the right is a rarity. I’ve done it a mere four times in my life – including on Il-76s.

// Btw – do you know why practically all (99.7%, as per my own personal experience) planes in the world have passengers board and leave on the left side? Find out here ).

Our second surprise: just how neat and tidy and trimmed and groomed and painted and even photoshopped the whole place looked. Maybe I was tired, and it just seemed that way, I thought. But no, it wasn’t that. And I’d just come from Japan and Bavaria – both very neat and well-kept places. But here it was like in New Zealand: as if in a perfect picture postcard – everywhere!

In places it reminded me of that Windows XP desktop wallpaper ).

Even a dog kennel on a valley side looks neat and tidy and actually adds something to the overall picture instead of marring it! 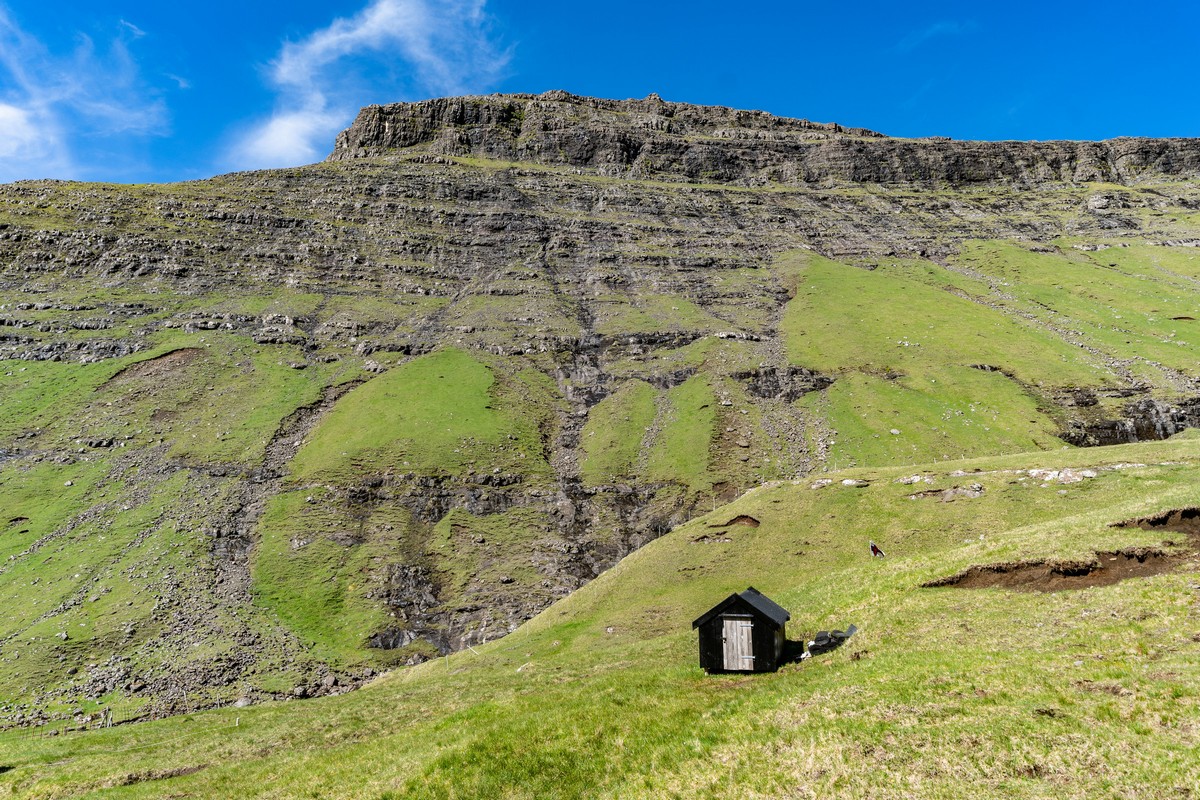 One thing there’s none of on the islands: flat land. So they made some – for the airport’s runway:

Between the islands here there are… tunnels! Long and well-made ones too. They’re toll-tunnels. Our driver told us how they pay for themselves after 10-15 years.

Salmon farming! One of the main industries of the islands:

The icing on the cake for us was Mulafossur Waterfall near the village of Gasadalur:

Btw, you’ll notice how the pics of the waterfall were taken in wet, foggy conditions. Hmmm, I guess the poor weather was to be expected sooner or later – Wikipedia can’t have made it up, after all ). But you’ve nothing to worry about – the sun came back out to play later – as you’ll see in my next post.

PS: You’ve another 170+ photos to look forward to!… More popcorn, and maybe some warm nachos with the sauce too!