Next up on our tour of Greenland – the town of Ilulissat, 550km north of Nuuk, and 200km inside the Arctic Circle. Yes, that means that in July the sun never sets, which we tested – positively – for ourselves.

There are no roads between Nuuk and Ilulissat (!), so it was back onto one of those small red planes to get up to the town. This is only a good thing as the views out the windows are spectacular – that is, if you manage to get a window seat: air tickets don’t come with an assigned seat as usual, so you have to be up front in the line. But that can be tricky, since they announce the gate number only in Danish, then English Greenlandic (again an example of Greenlandic laidbackness – but this time I wasn’t too happy about it).

We flew with a quick connection in Kangerlussuaq. And that’s where I got lucky: I was allowed to sit in the cockpit all the way to Ilulissat – sat in the third seat behind the other two :).

Well this was a first: in the cockpit for a whole scheduled flight (Greenlandic laidbackness again – yeh!). And the flight being over Greenland was just the icing on the cake glacier!

Wikipedia states that the word Ilulissat means ‘Icebergs’ in the local tongue. And it was namely icebergs we were flying in for. Here they are first appearing:

Though they make trips such as these several times a day, even the pilots reached for their smartphones to take pics of the exceptional views… 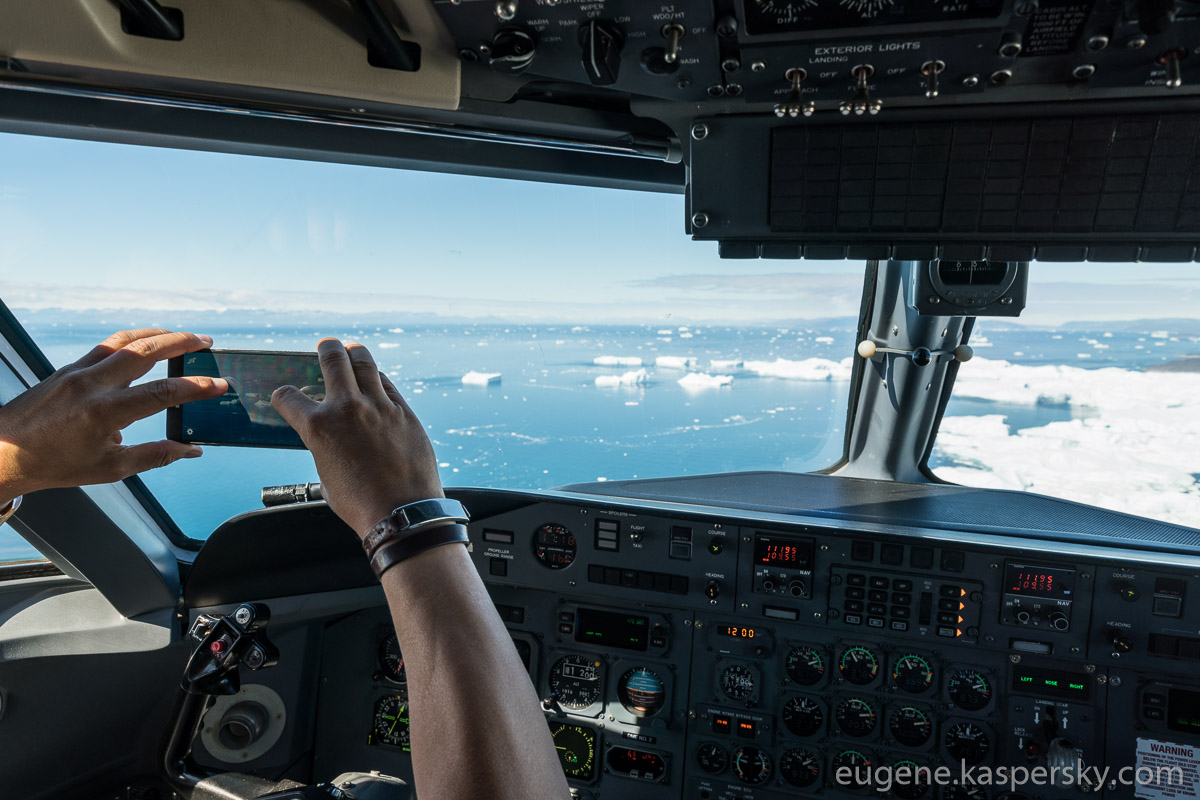 Can’t work out the size of these icebergs? Well, if you look carefully, there’s a red boat dot just by the third (the one on the right) of the three icebergs lined up in the middle of the below pic! 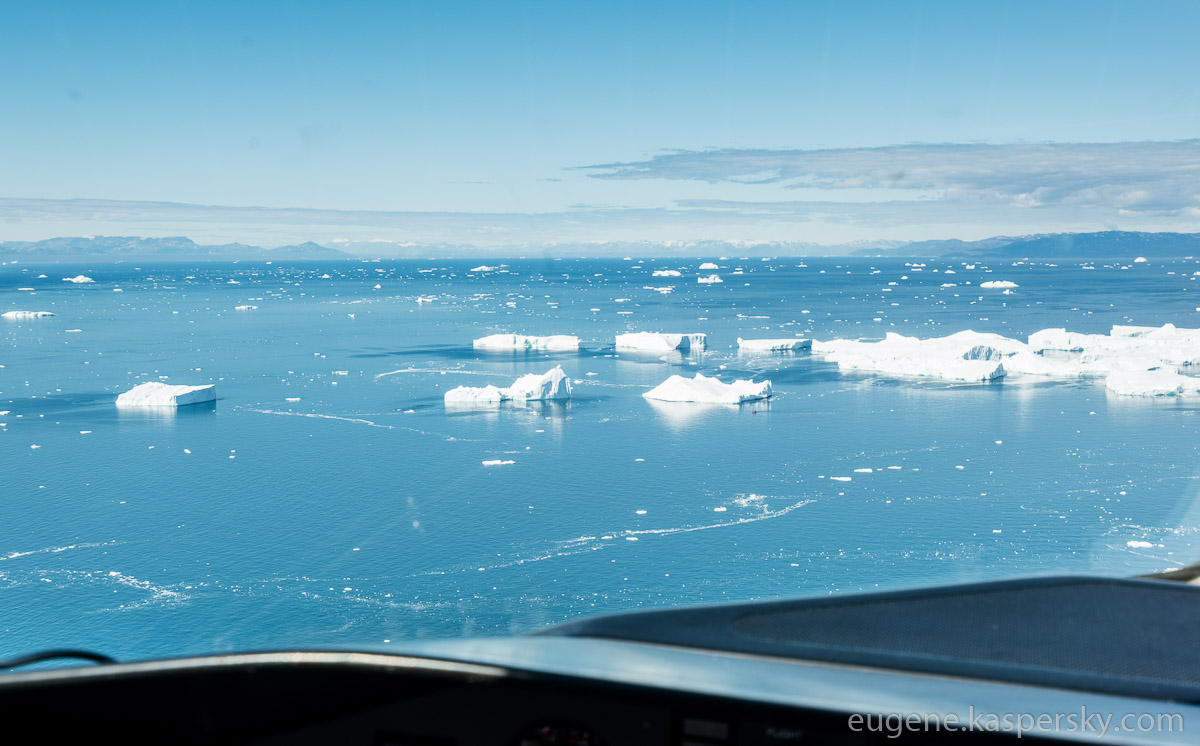 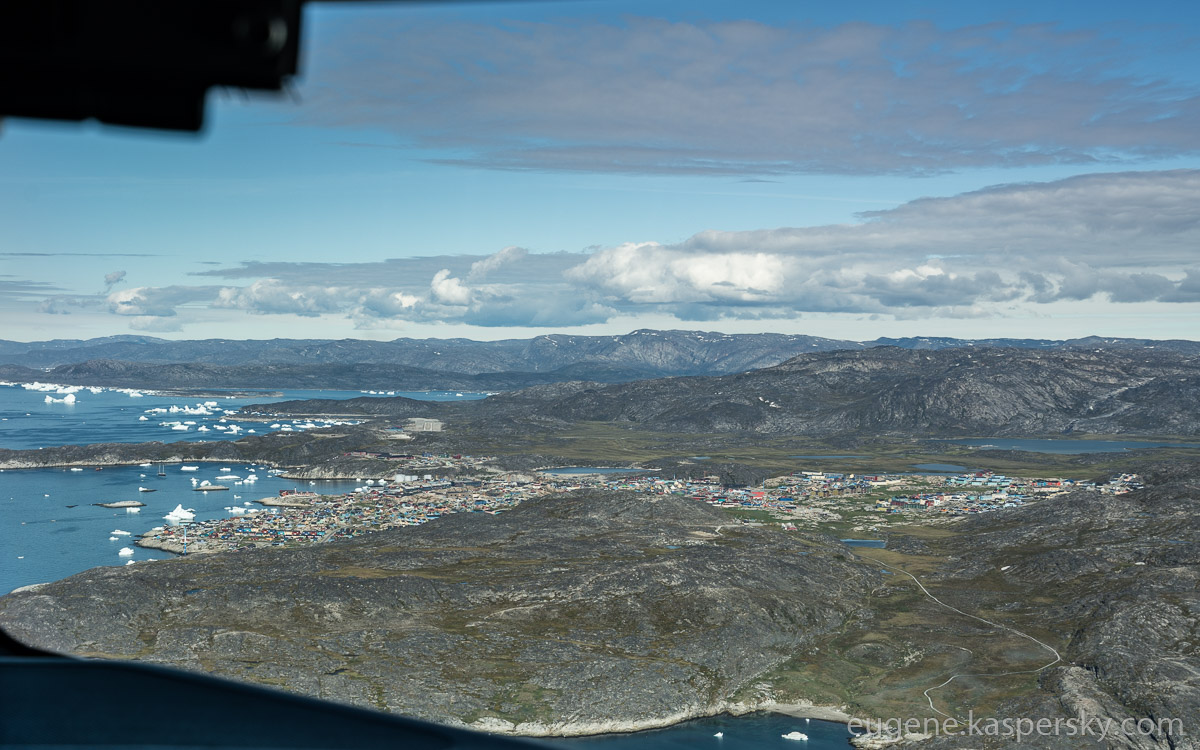 Here comes the runway. Oh my Greenland: it’s so short!… 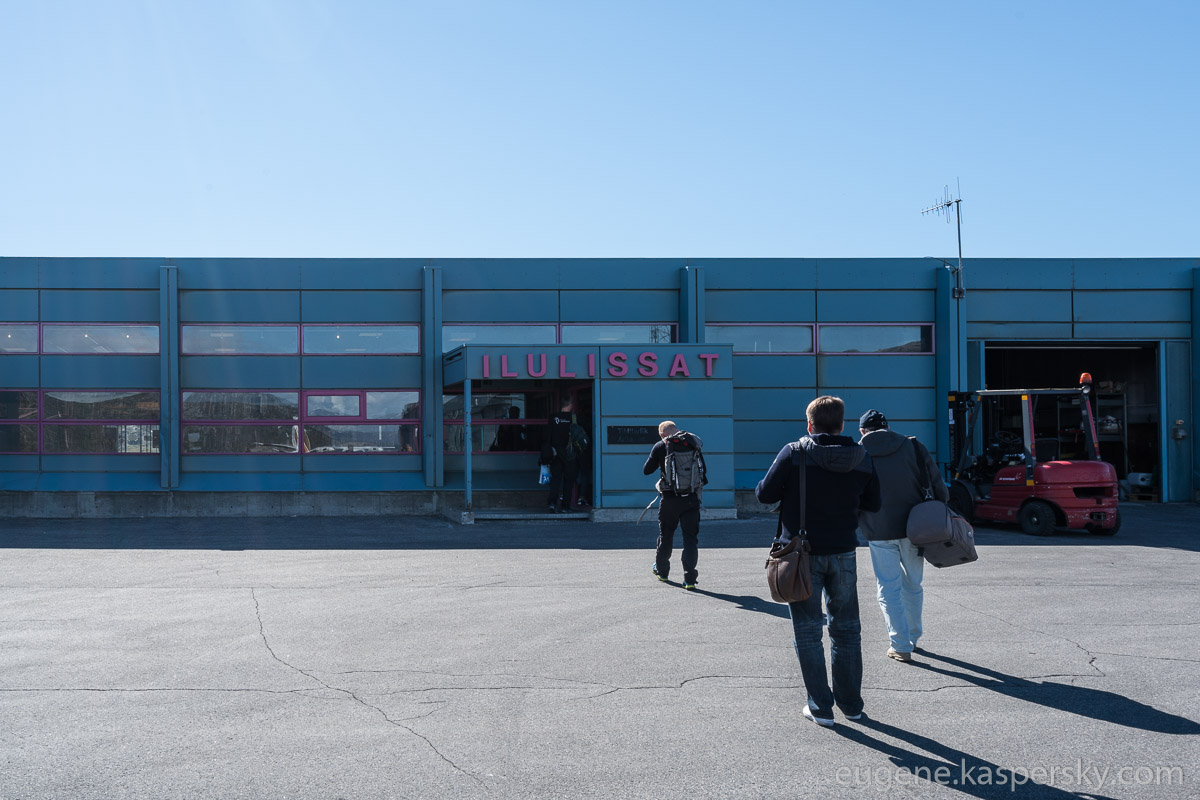 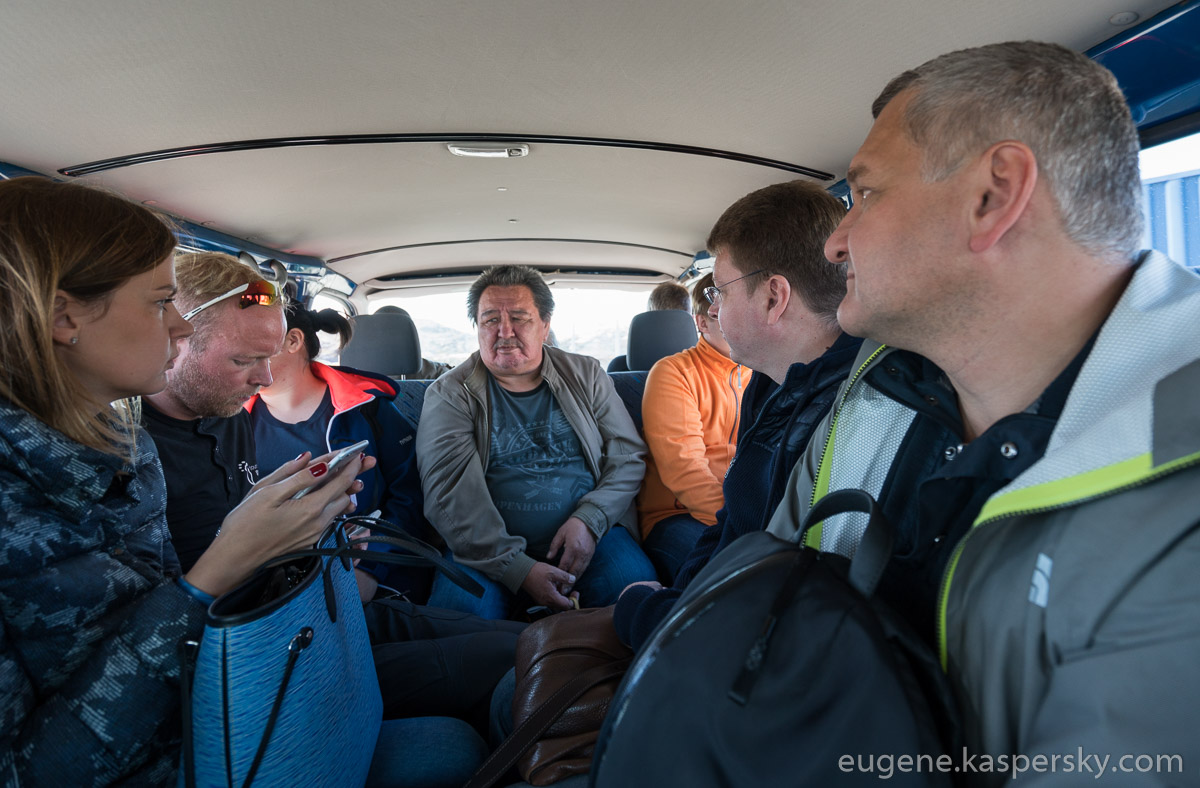 All the photos from Greenland are here.

PS Here’s the answer to my Question No. 3:

(The question again: All air passengers on any plane in the world both board and leave the plane through the left-hand door, if looking forward. Always. Even if it’s more logical to open the door to the right (if there is one) [like if the terminal is to the right of the plane, looking forward]. Sometimes passengers are let out/in through the rear/mid-door(s) too (discounters do this – so boarding/disembarking is quicker). And if it’s an Airbus-380, they open the upper level’s door too. But always only ever the left doors. Why?)

Now, I wasn’t fully aware of the answer(s) myself (!), though I had a theory or two. Anyway – no matter, for I got lots of answers. Turns out there are quite a few reasons why the doors for passengers are always to the left:

– The baggage hold doors are mostly (at least on all Boeings and Airbuses…) on the right, so the passengers take the other side of the plane, so never the twain shall meet and get in the way of each other.

– Inflight meals and drinks are also loaded from the right.

However, this little synsopsis, from the horse’s pilot’s mouth, summed up things best, I reckon:

It’s not quite true that the main boarding door is on the left for all planes, but it certainly is convention for most current transport category aircraft (such as Boeing, Airbus, Embraer, Bombardier, etc…).

I believe the reasoning goes back to ships, which have a port (left) and starboard (right) side. The word starboard comes from “steerboard” which referred to a board similar to a rudder on the right of ship. The placement of this board required that the port side was the one you would embark and disembark from, so most airplane and jetway designers followed the same convention.

While most larger transport category aircraft have two front and two rear exits, the placement of catering trucks and baggage loading equipment on the right, makes using the right doors impractical.

It is worth nothing that many smaller general aviation aircraft board only from the right side (an example of that is the Mooney M-20 I fly) which due to the cramped space, allows the pilot to enter and get seated before the right seat passenger.

That got me thinking more on the subject of avia-doors:

1) What side did (do?) airship passengers board/disembark on?

2) What side do hot-air balloon passengers board/disembark on?

Back tomorrow folks, with more Greenlandic tales from the north side…