Acclimatization completed, it’s time to finally get stuck into Indonesia’s volcanism, of which there’s rather a lot – as in: hundreds of volcanoes!

Indonesia could be described as simply a huge collection of volcanoes, many of which regularly erupt, many of which are extremely (symmetrically) beautiful, aka – must-see!

Some sources say there are around 300 volcanoes, some – around 400, others – around 500! That’s quite a margin of error! But it’s to be expected: they’re difficult to count. Example: a volcanic mass with three or four distinct conical peaks: does that count as one, or three/four?

‘Active’ volcanoes are counted separately, but again there are differences in the totals as there’s no fixed definition of an active volcano. Anyway, in Indonesia there are around 75 to 130, depending on the source on the internet you look up.

Whichever total you take, there’s no denying Indonesia is one seriously volcanic country. But then, of course it is: Indonesia is a segment of the islands (and peninsula) that help make up the Ring of Fire (together with its volcanic siblings like Japan, Kamchatka, the Kurils, New Zealand, etc.)

But enough of volcanic theory; time for some actual volcanic experience. All righty: in at the deep end – Mount Merapi: the most active volcano of Indonesia…

The beaut in the following pic isn’t Merapi, it’s the next-door volcano: 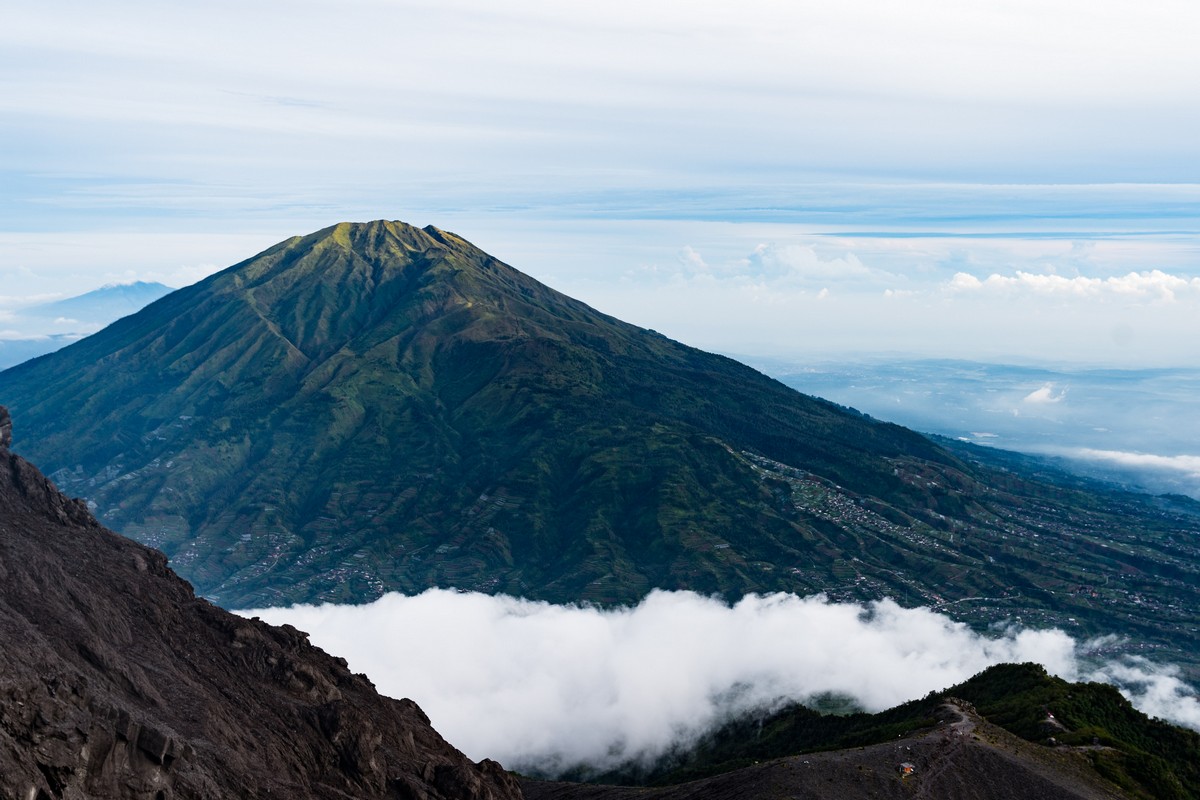 No matter what direction you look in here it’s other-worldly, enchantingly volcanic:

While taking these pics I was reminded of my 12 reasons volcanoes are way better than mere mountains. Ok: let’s go through the list and find out using Merapi as an example… 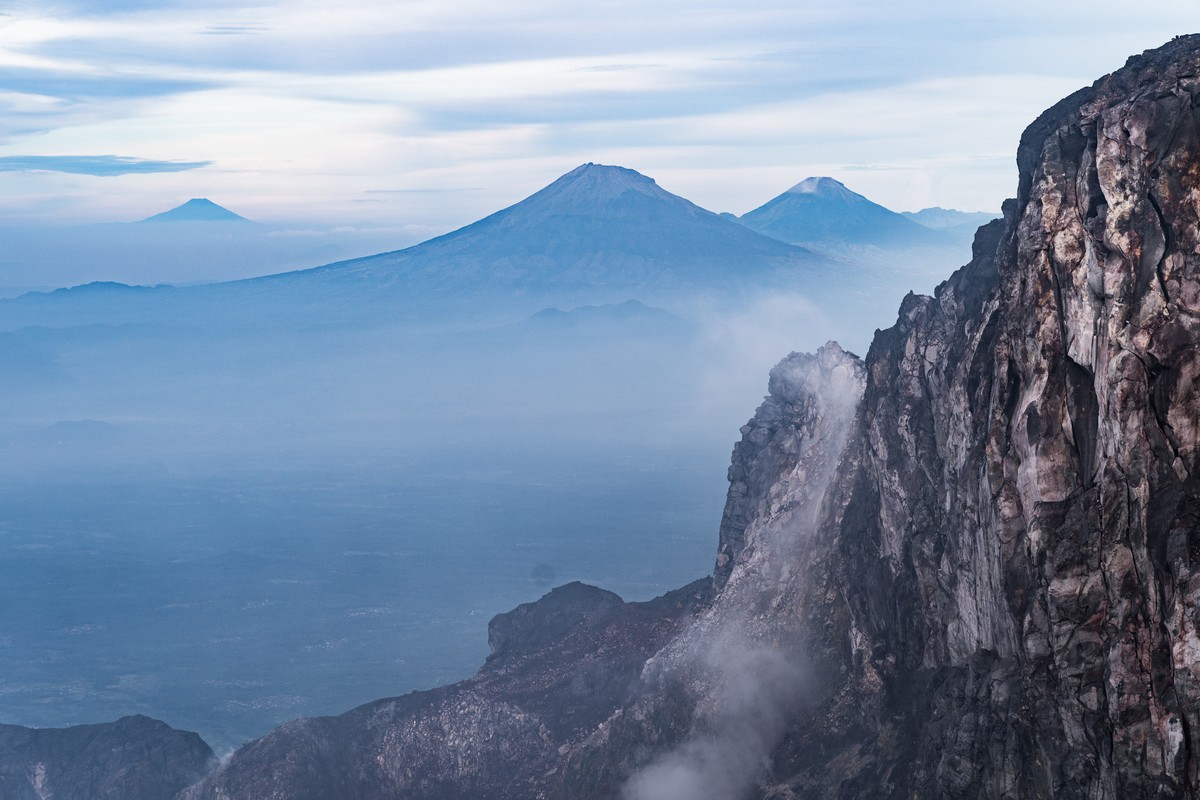 Crater at the top – check (a fresh one at that). Awesome panoramic views all around looking outward, plus the bonus when looking inward too. 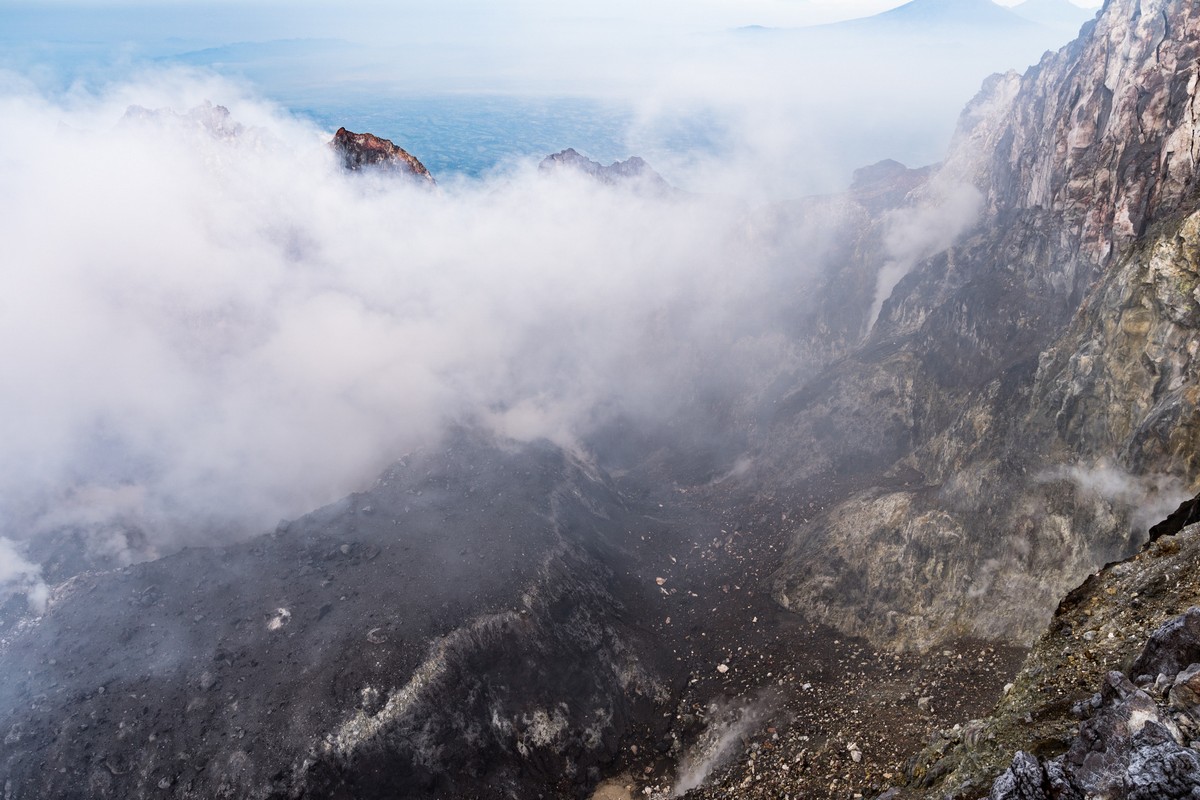 Celestial observations. Though I didn’t see any observatories on Merapi, I did see these volcanological instruments: 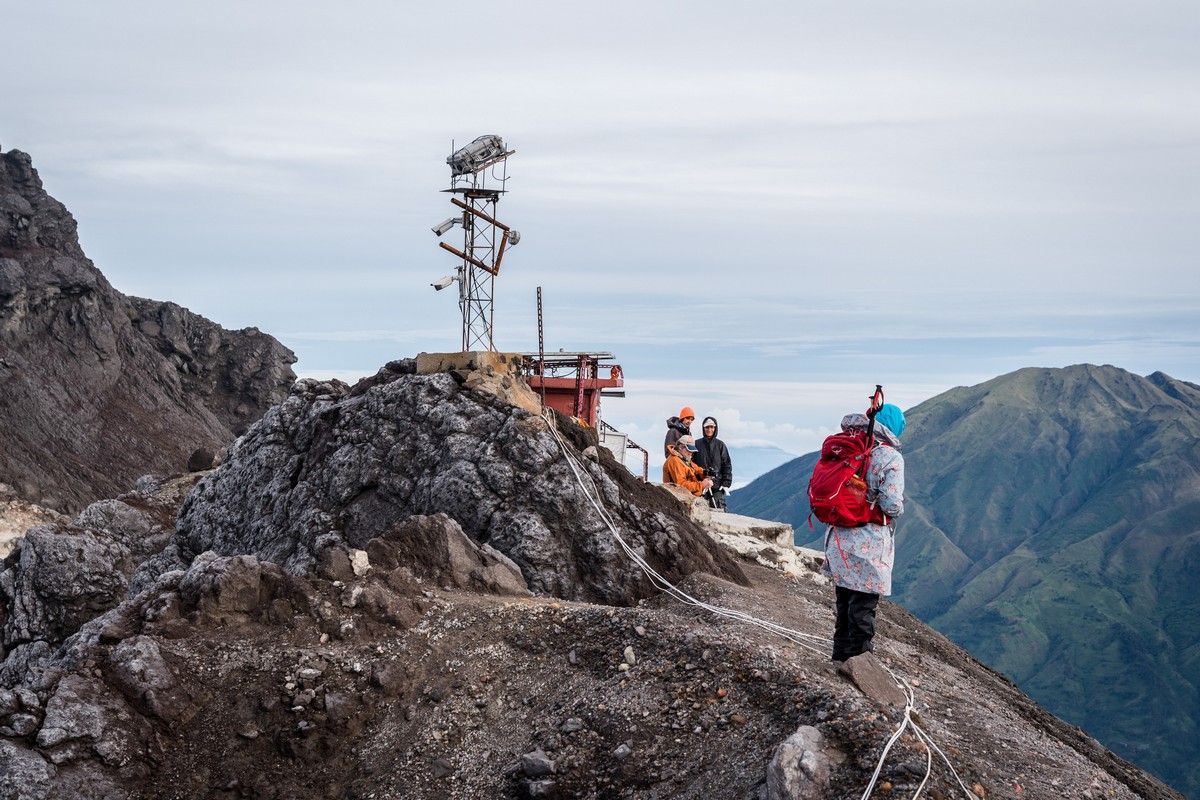 Volcanoes = riots of color. No disputing that either! 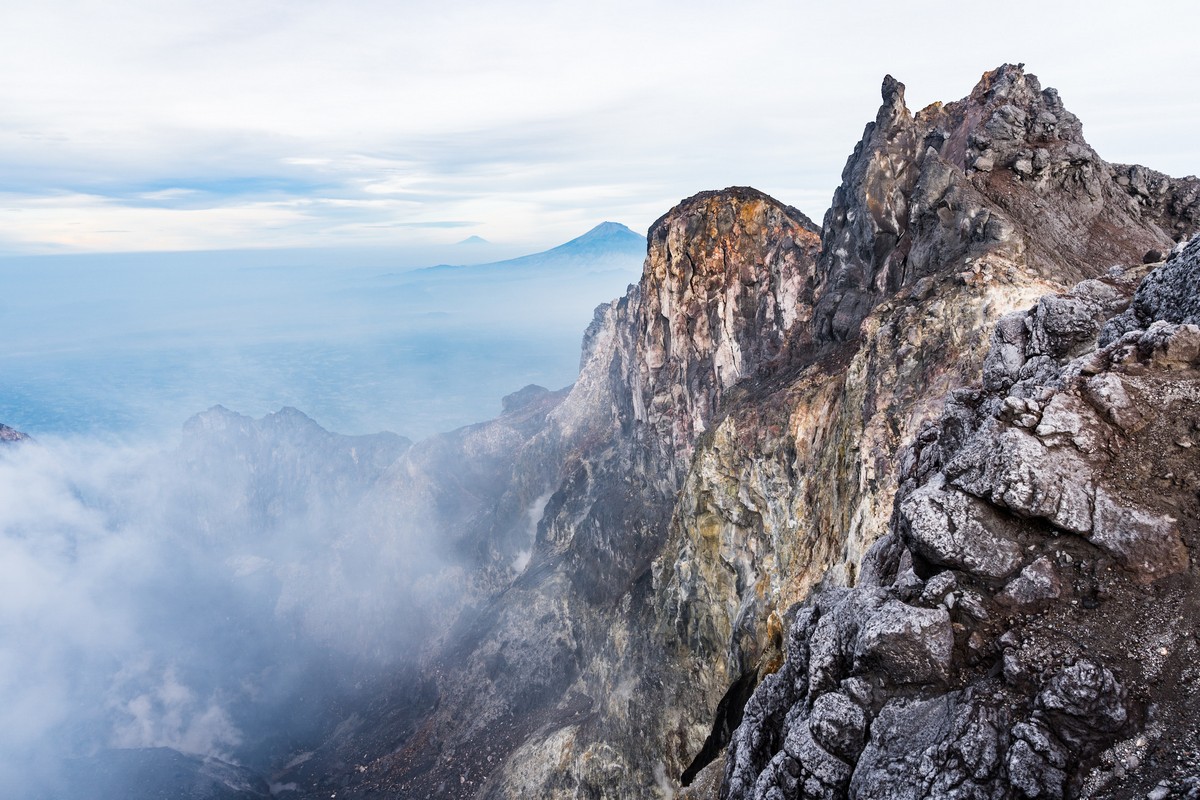 Volcanoes are often warm. Merapi is no exception. We made it up to the summit (~3000 meters above sea level) at dawn and, though nippy, at least the thermometer showed a ‘+’ temperature. In some places the rock underneath our feet wasn’t just warm, it was piping hot! Hollows in the rock made nice volcanic body-warmers to take a breather in! 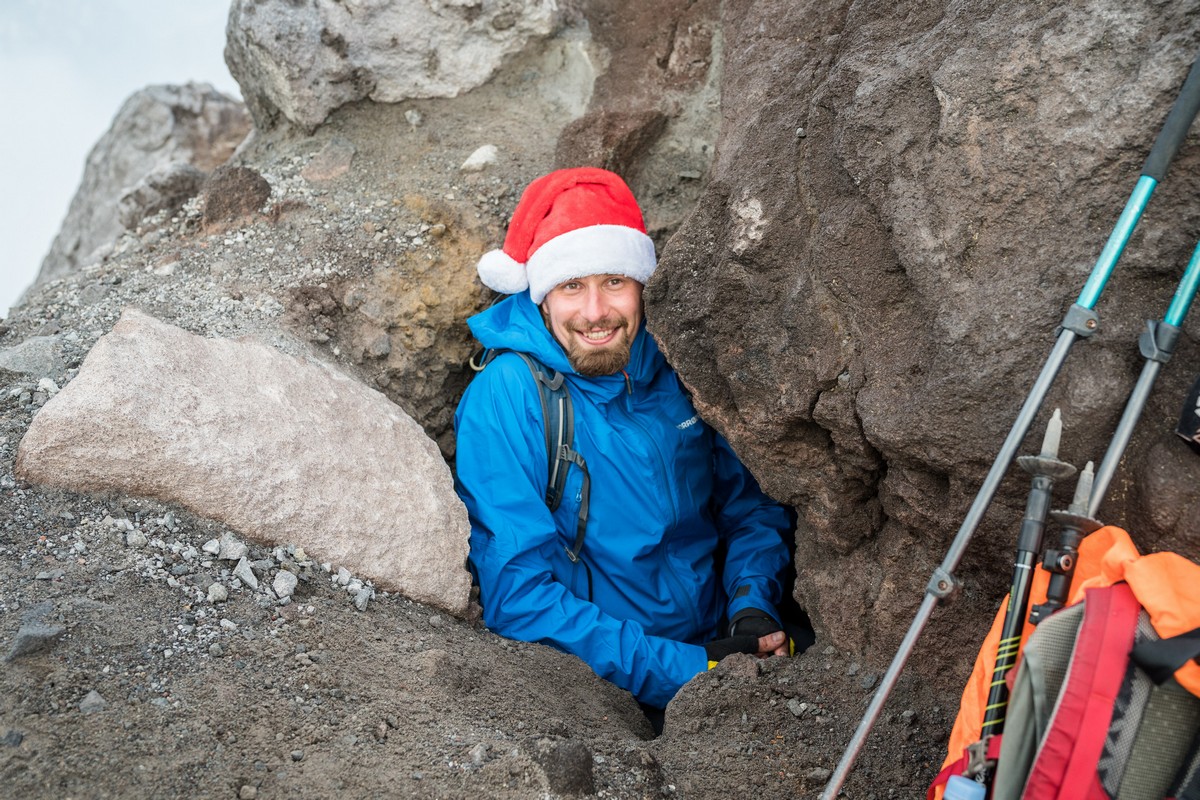 Volcanoes erupt. Merapi erupts. Merapi is the most active volcano in Indonesia, and one of the most destructive. It has also taken thousands of lives throughout its history.

“Typically, small eruptions occur every two to three years, and larger ones every 10–15 years or so. Notable eruptions, often causing many deaths, have occurred in 1006, 1786, 1822, 1872, and 1930. Thirteen villages were destroyed in the latter one, with 1400 people killed by pyroclastic flows.

“The very large eruption in 1006 is claimed to have covered all of central Java with ash. The volcanic devastation is claimed to have led to the collapse of the Hindu Kingdom of Mataram; however, the evidence from that era is insufficient for this to be substantiated.” – Wikipedia.

The last time Merapi erupted was in October-November of 2010: 353 people died, mostly from pyroclastic flows. These eruptions took 40 meters off the top of the volcano, and left a lop-sided crater up there – somewhat resembling the crater of Mount St. Helens, which I visited in August 2013, and Bezymianny on Kamchatka. A new, smaller cone is growing up inside the lop-sided crater, which sooner or later will also blow it’s top. 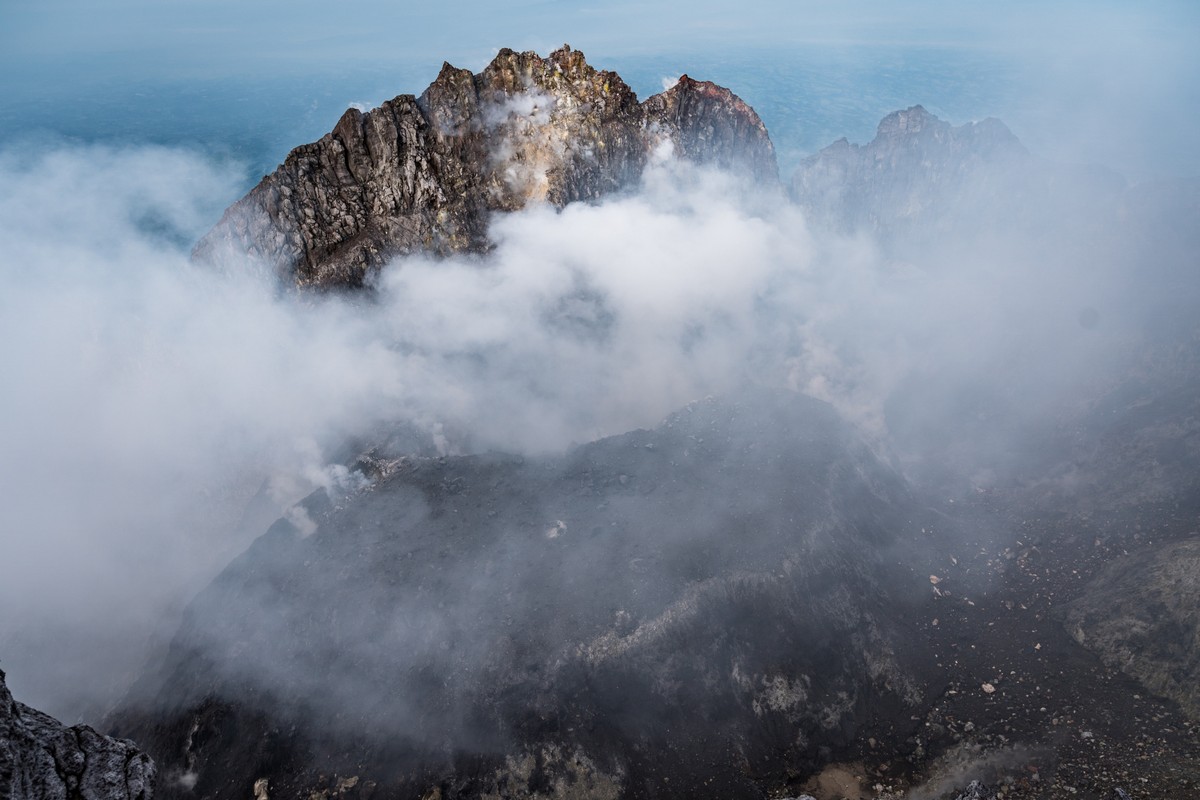 The cone is constantly monitored by volcanologists. Btw, eruption forecasts are pretty accurate; they’re based on the monitoring of mini-earthquakes, which attract rising lava upward. 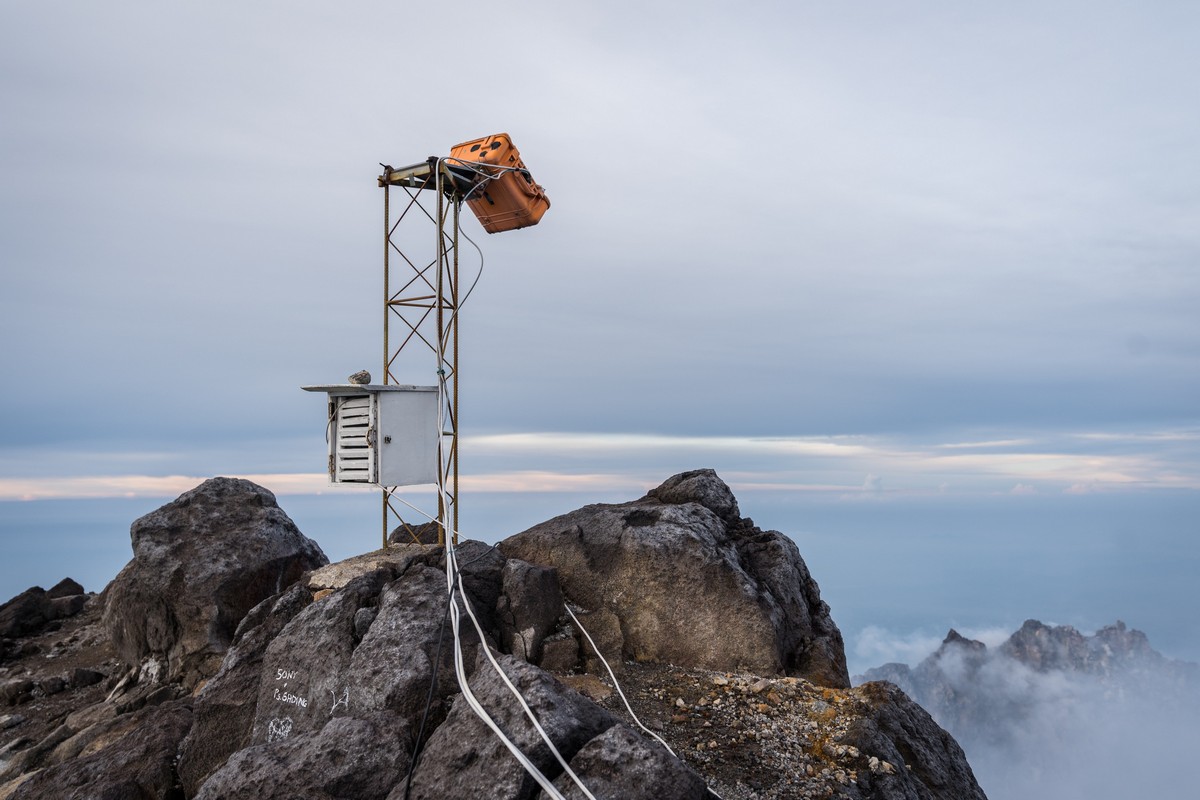 Btw, the 2010 eruption was predicted in good time, and 350,000 local inhabitants were evacuated. However, some decided to return – only to be killed by the pyroclastic flows. These deadly flows btw look like this:

That was then; this is now: 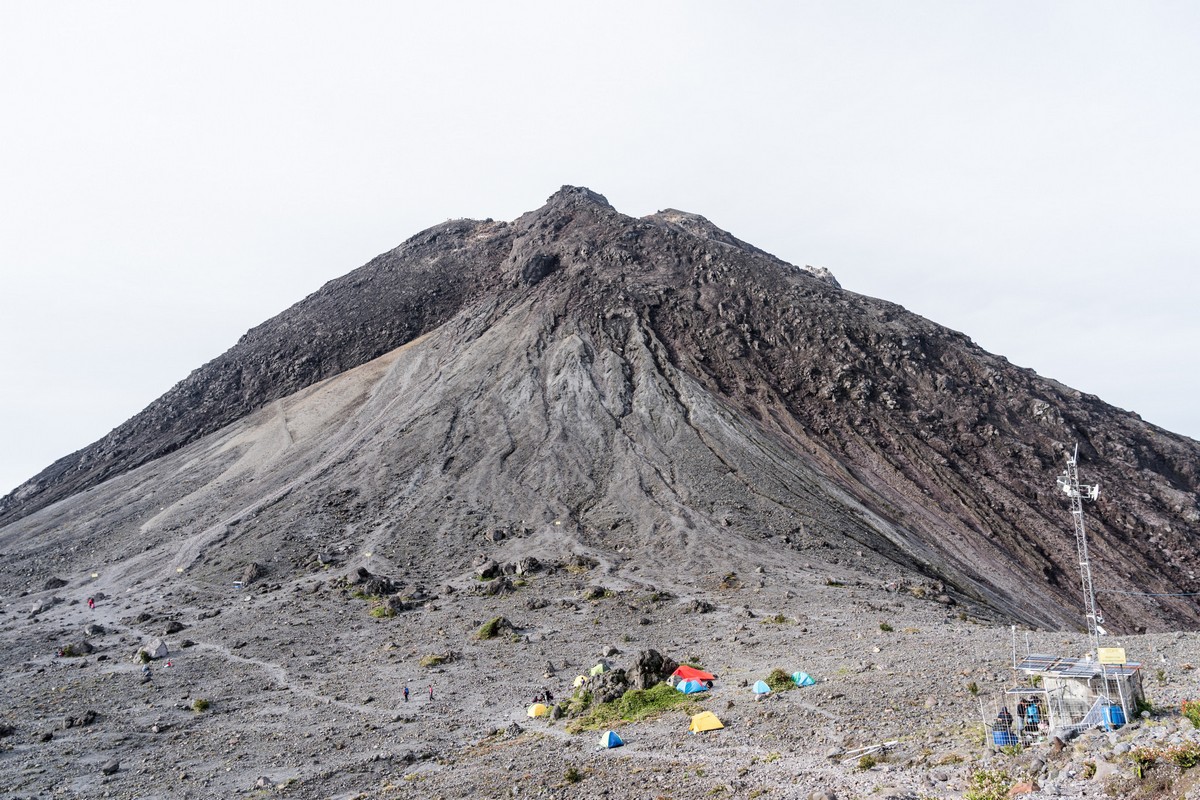 And up we climb it… 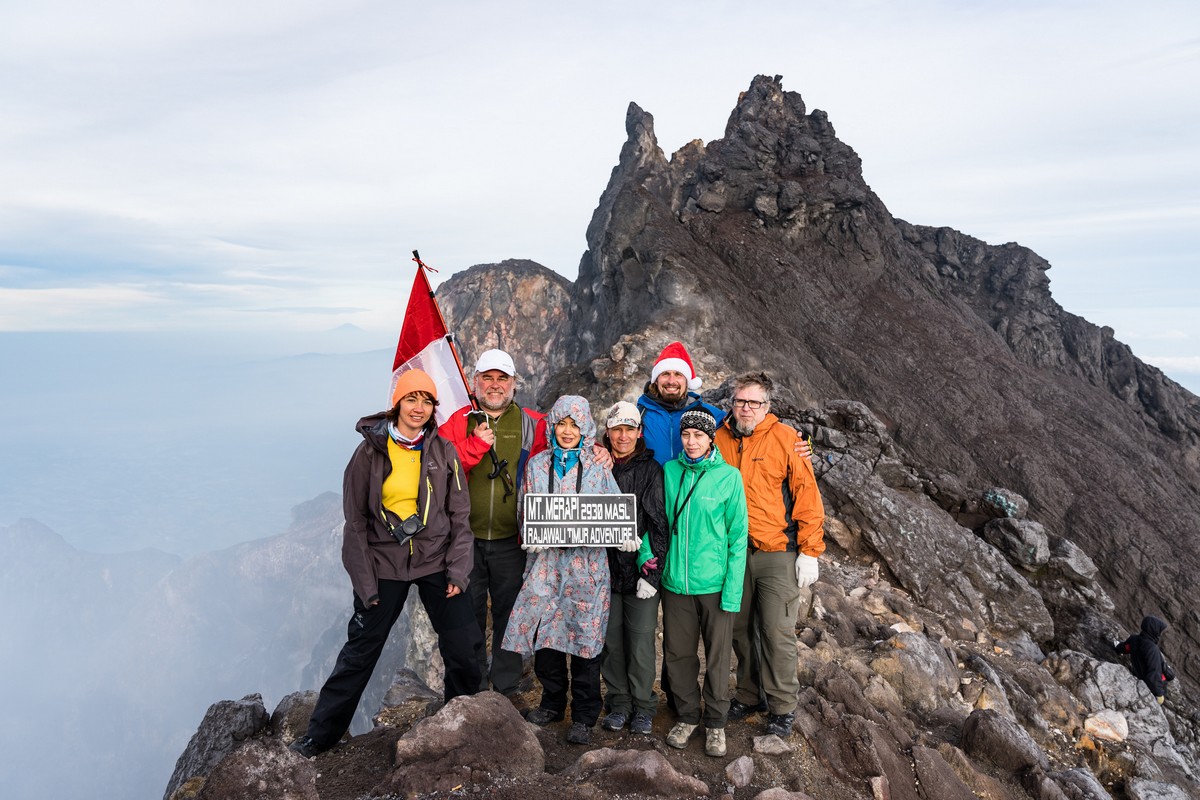 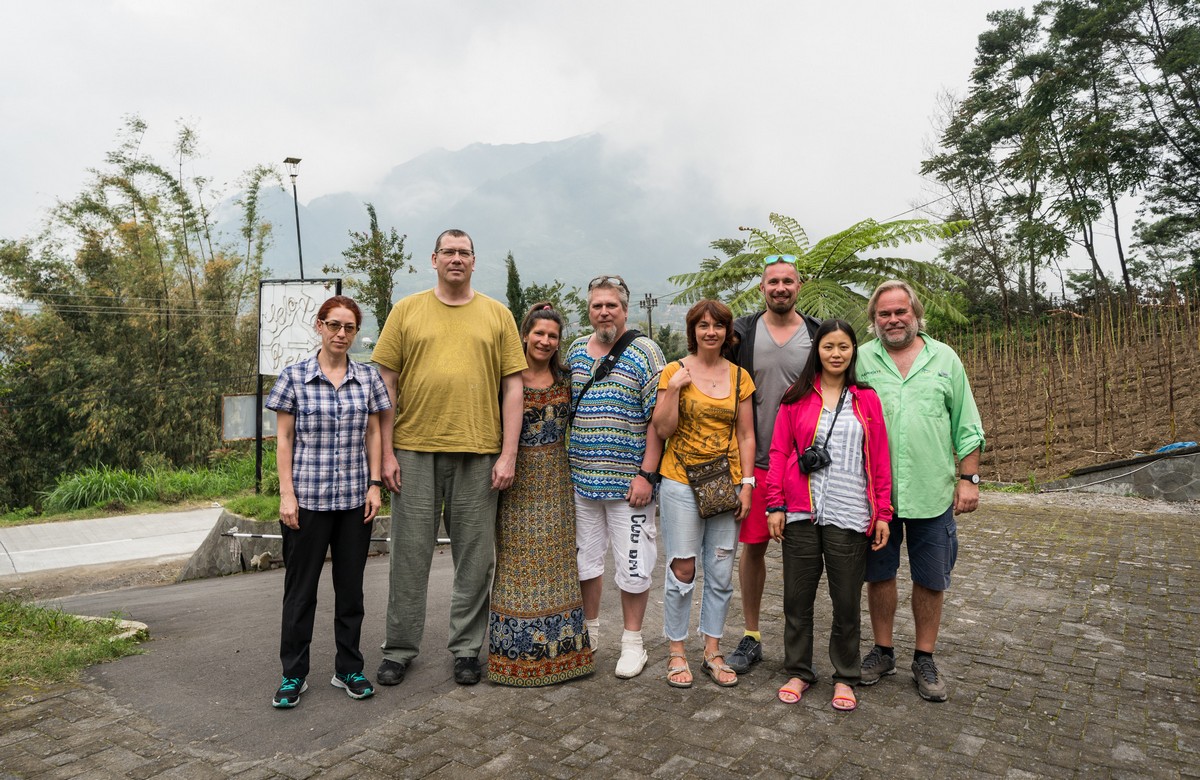 At half-past midnight we awoke, and 30 minutes later we were on our way already to conquer Merapi. Btw, practically all our volcano climbing took place at night. And there’s a good reason for that.

First, at night it isn’t so hot. Ok, so two kilometers up from the sea it’s hardly going to be scorching, but still: cool is cool ); then, three kilometers up the temperature gets down to around 10°C and warm clothes are needed (see the photo above at the peak). It’s the first leg of a volcano-scaling trek down in the stiflingly hot jungle that makes a night-ascent the way to go.

Another thing: at night it’s not so horribly humid. Mercifully, at night in this part of the world the skies are mostly clear – crystal clear so all the hot air from the day has somewhere to escape of a night. (These clear night skies also mean every night is a very starry one: oh my galaxy-gawp!) By day, come noon the peaks of volcanoes are normally shrouded in cloud, and after lunch it’s normally raining, so that’s two more H20-based reasons not to climb volcanoes by day: you may never see much because of the cloud and then you’ll get drenched by the daily equatorial tropical rainstorm.

So we had to force ourselves to observe strict scheduling for our climbs: a light dinner at 7-8pm, then bed. Four hours later up and off. Sounds harsh, but you quickly get used to the new rhythm.

Night-ascents have another bonus: you can’t see signs such as these along the paths: 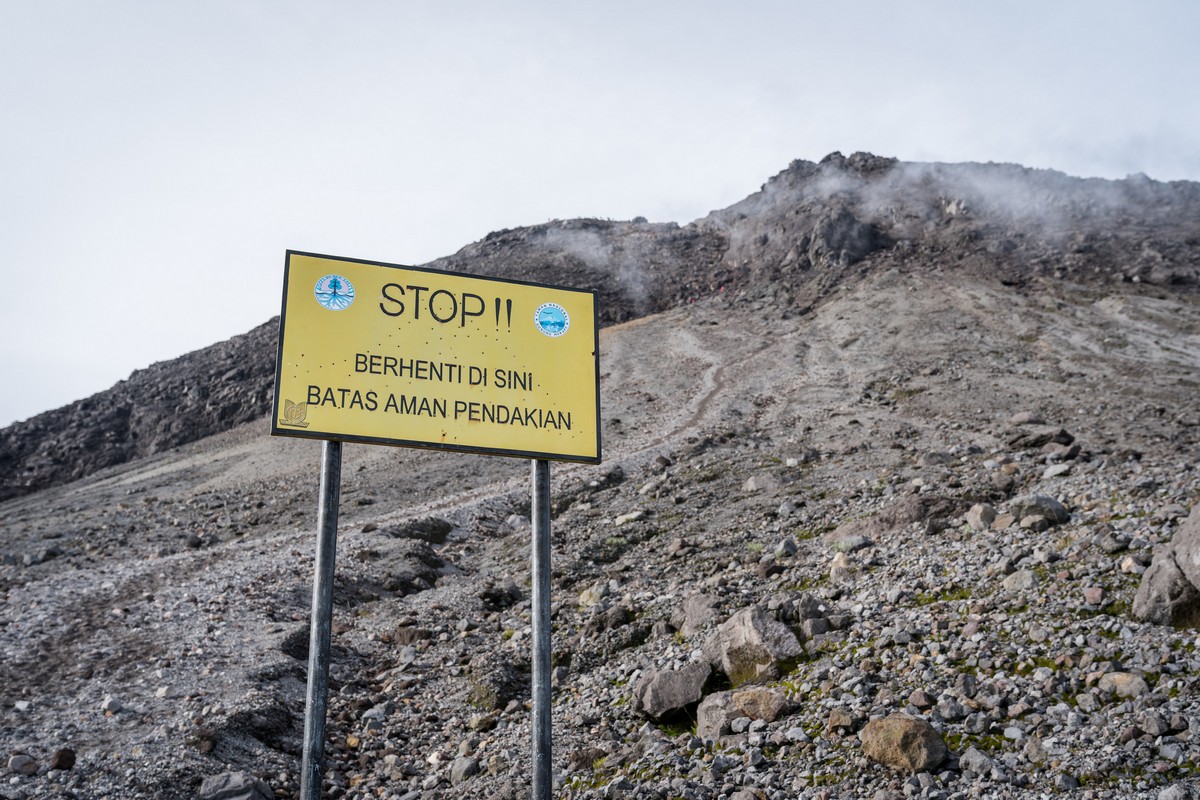 Technically, practically anyone can clamber up this volcano – even someone not in great shape. It’s a mere 2930 meters high – not very tall at all. Besides, it’s well signposted and the paths going up it are all good. All the same, I wouldn’t call it a doddle for all: office workers who take little exercise will be huffing and puffing and generally struggling with all the physical exertion when the paths become steep. Btw, besides a torch and trekking sticks it’s a good idea to take some gloves that you don’t mind messing up while clambering up the rockiest steepest stretches on all fours! 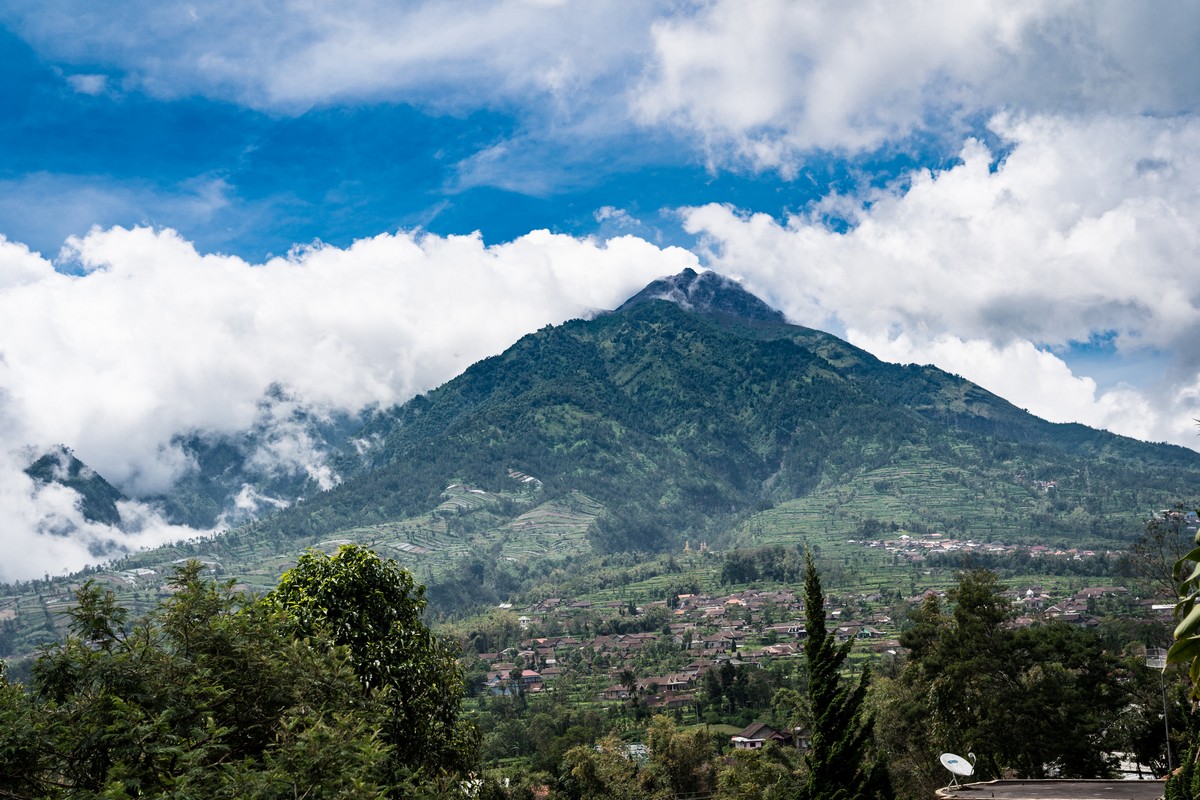 Next, a short stay of a few hours in the hotel in New Selo village at 1800 meters above sea level, then a car drops us off some 3km from the start of the volcano’s path, and that’s where the trekking starts. The walk is 3.5km long, rising some 1200 meters vertically. This takes around four or five hours taking it steady – in time for the sunrise around 5.30am.

3.5km in 4-5 hours? Yes – you can tell it’s going to get steep and the going’s going to get tough. Indeed, many a pair of untrained legs among our group were ready to just give way by the time we reached the top.

The ascent starts nice and easy with this here nice concrete path: 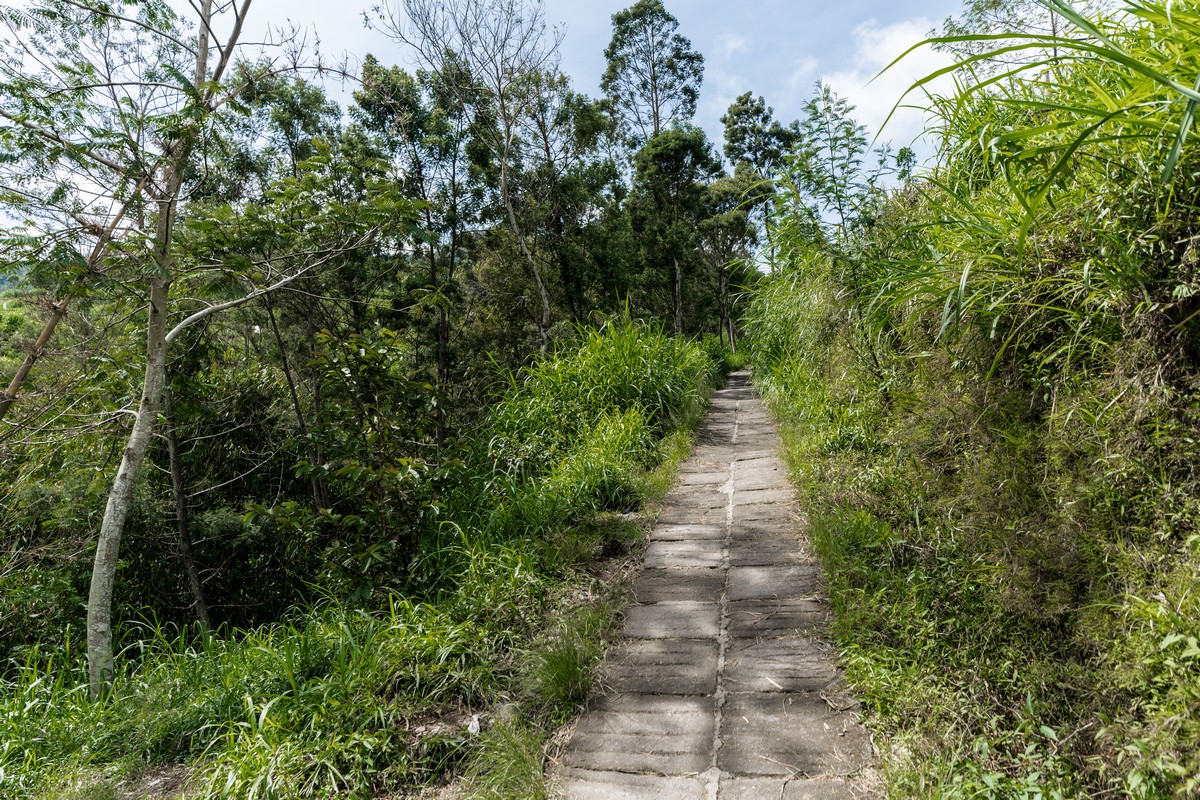 Later: no concrete, loose rocks, and clambering up lava!… 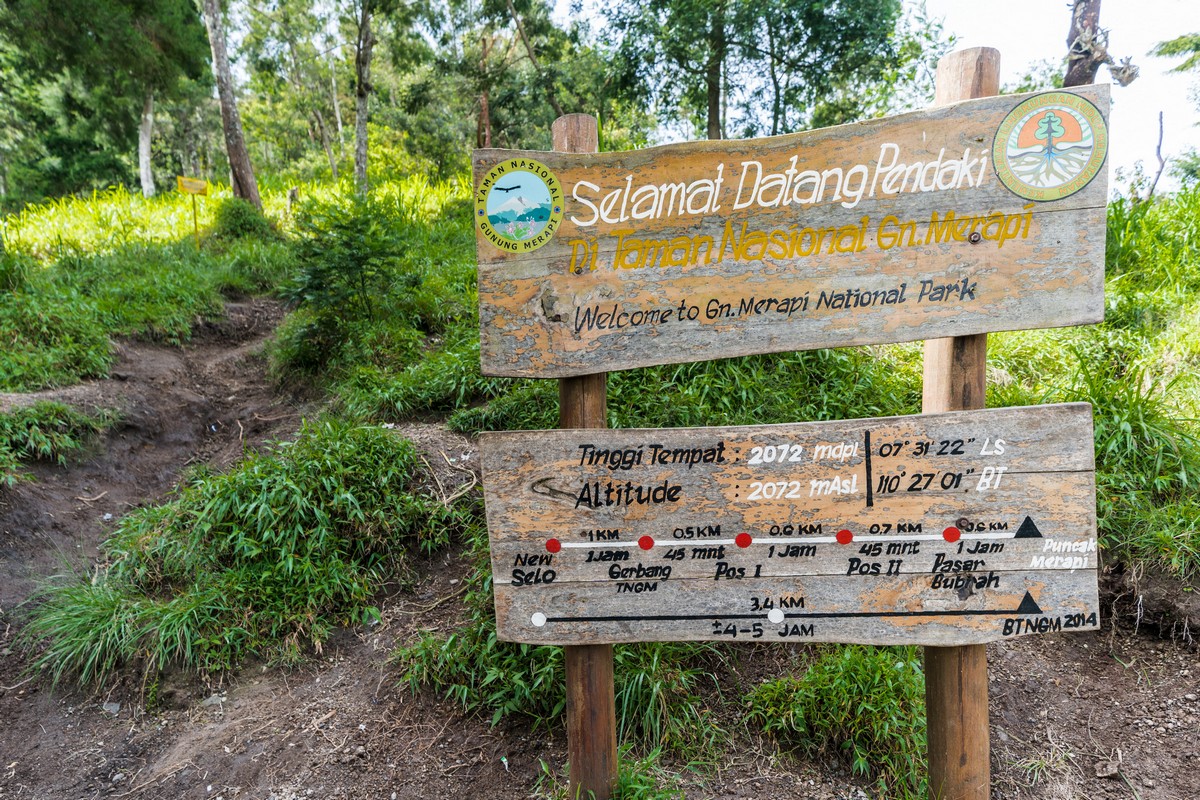 We pause to catch our breath at Gerbang Tnom, then it’s onward up to Pos I, then Pos II, and on like that up to the peak. The signs are very informative: they show the distances, the altitudes and the approximate walking times:

It goes without saying that all these pics of mine were taken on the descent; going up there was nothing to see for the pitch black night.

The last stretch is the trickiest: loose rubble underfoot; clambering – not walking. And already there are folks up there waiting for the sunrise. We too made it in time.

Going back down was a lot more fun: tons easier and with outstanding views.

Three photos of the hotel we stayed at in New Selo:

Merapi will probably erupt again soon and spew out its ash in all directions, and the shape of the crater and the lava slopes will be completely different next time…

That’s your lot from Merapi folks. Back with more Indonesian-isms tomorrow…

The rest of the photos from my trip to Indonesia are here.