What happens to a regular tourist from the North who, after an extended period of Christmas/New Year mirth and merriment suddenly finds him/herself in equatorial Indonesia? Yep, he/she has a rather tough time acclimatizing: to both the difference in time, and to climate… (and to crazy Indonesian driving! More on this later on below).

So, time: it’s +7 from Greenwich. Not so extreme, I hear you saying; hardly +12 now, is it? No. But when you add the climate to the +7 hours, that’s the killer. For there’s no pleasant resort-like weather here. Instead it’s a full-on extreme equatorial tropical climate. By day – around 30°C; by night – 25°C, and always hellishly humid – what feels like a constant 100%+.

It goes without saying that scaling a stratovolcano immediately upon arrival in Indonesia is the last thing most regular tourists fancy doing. What’s the first thing on their minds is a slow acclimatization and taking it relatively easy over the first few days, which is just what we did – on the island of Sumatra. There we visited Lake Toba (more on that later), and also a jungle – where we observed daily life of wild monkeys and orangutans.

When you happen to see an orangutan’s footprints on the ground you might think it’s not an orangutan that made them but a male human (in a fur coat :) who walks on his hands! But no – they’re real orangutans, and here on Sumatra you can get up real close to them – if you fancy your chances. Our guides encouraged them to come closer to us – and even offered them bananas. The cute furry animals were only too pleased to accept, eating them all up with gusto!

This one here lives high up in a tree in a nest, looking after her little ones:

Alas, I don’t have any pics of the orangutan’s nest, but I can say it did look just like a nest, right near the top of the tree: a huge (for the size of the orangutan) construction carefully woven out of branches. Cozy. 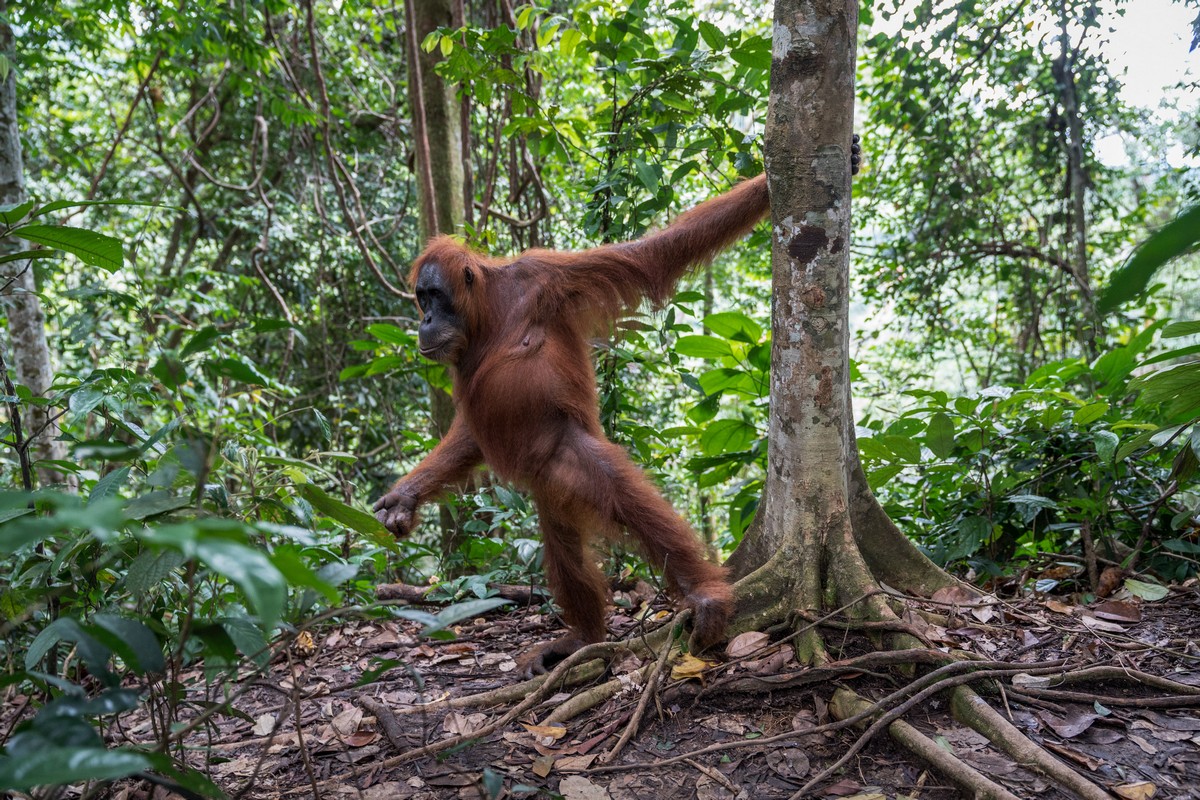 What else did I find out about the lives of these friendly furry quadrumanes? They’re loners. After mating season a couple splits up, with the male going off in search of his next romantic conquest, while the (then to-be) mother spends the next several years bringing up their offspring single-handedly. Only when he or she achieves adulthood does the mum go in search for another mate. All very practical. In other words, orangutans propagate slowly; but, then, they don’t have any real natural enemies in the jungle (besides humans). They live rather long lives too: females – 40-45 years; males – up to 60, according to our guide.

Our guide also told us how there are several thousand orangutans living on Sumatra but the number is declining: the forest gets cut down, they get poached, and they also die at the hands of farmers protecting their durian plantations (orangutans love eating durian).

Meanwhile, we delve further into the jungle… 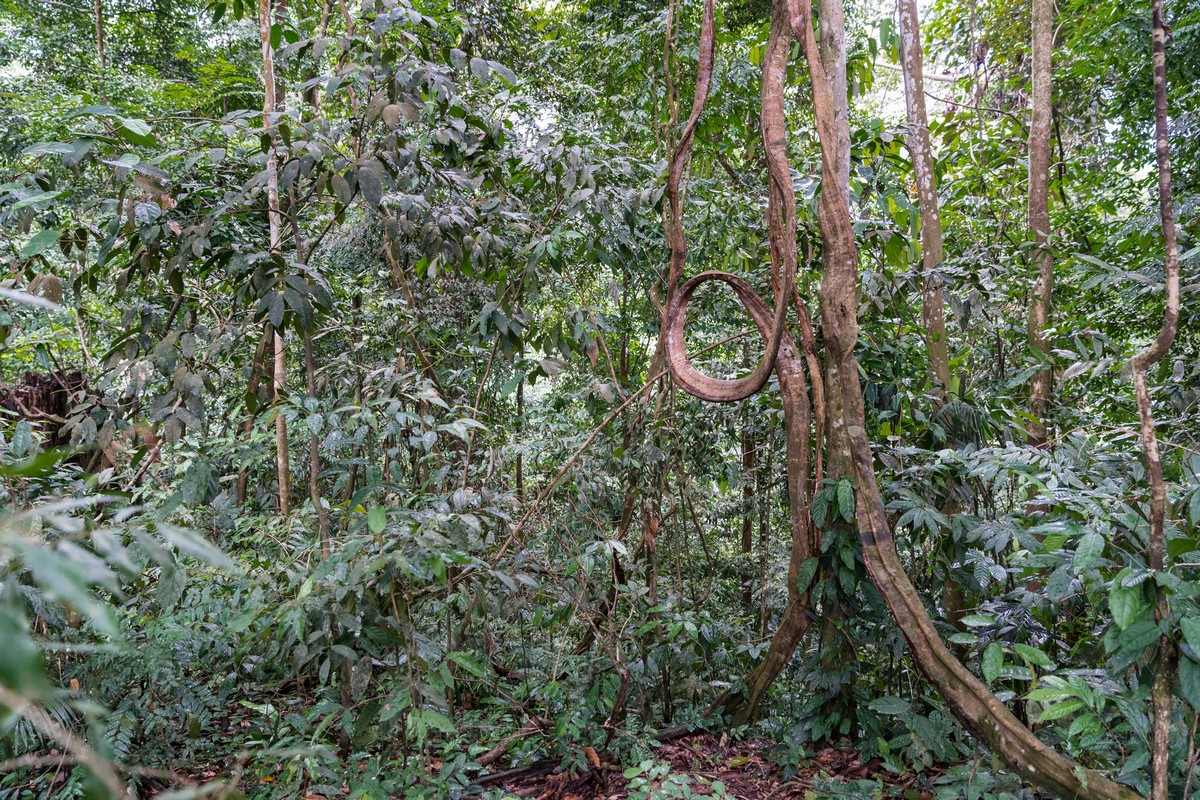 Whoa! As luck would have it a swarthy (around 100kg) male orangutan swung down from the trees to see what we were about. After performing some kind of jig among our group, he looked us over quickly and then continued on his way, clearly with orangutan business to attend to.

It was our lucky day: said male was being pursued by a female :).

It was our guides who told us how lucky we were: some days you might not see a single one as they’re off on other matters with no time for tourists. Our seeing three in short succession was a real boon.

And for dessert, we got to see some of these little beauts. Much less resembling man, but no less photogenic. Alas, I didn’t catch the name of the species and couldn’t find it on the net. Can any of you name them? 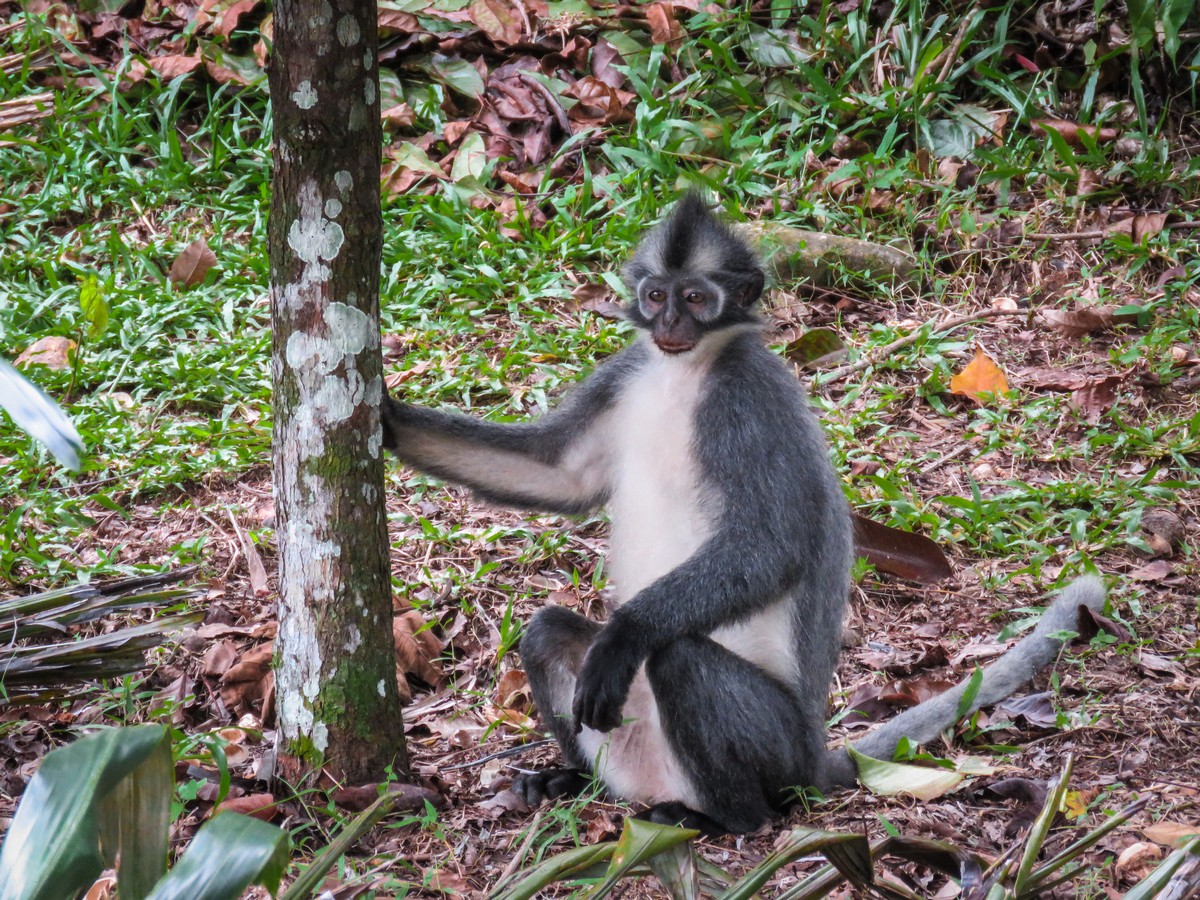 Update! A member of our fan club told me what species these are: they’re the Thomas’s langur, native to northern Sumatra!

Most cooperative are these monkeys: for a little food they delight in posing for the cameras. Here’s our tour coordinator/guide (who’d flown with us to Indonesia; not one of the locals), O.R., snapping one of her masterpieces: 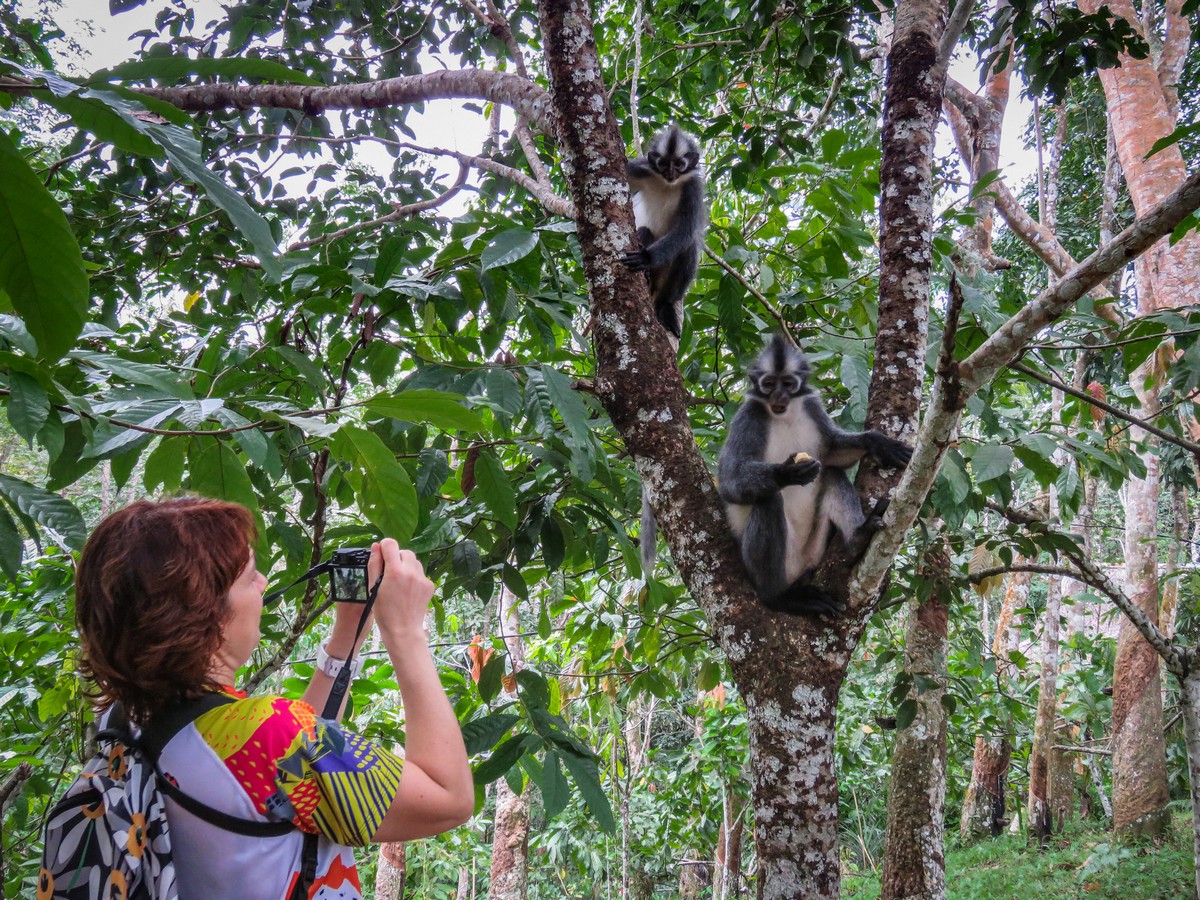 Macaques roam about here, but sadly we didn’t get a pic of any as they’re just too nimble: they come up to the tables of a restaurant on the edge of the jungle to pinch food! I bet they’d be off with shiny valuables as any were left lying around.

Now for a bit of useful information – just in case you ever find yourself here.

To see the orangutans and monkeys and the like you need to get to the small tourist village of Bukit Lawang. Doing so takes a good four or five hours from the nearest airport, in Medan, but it feels more like an eternity (even though it’s a distance of just 110km, but more on that later). Seemingly to make up for the journey, there are some very nice lodgings available at Bukit once you finally get there, with Wi-Fi in the restaurant. Ok, it was slow Wi-Fi, but it sure was better than nothing.

Right here was where the Wi-Fi was at:

Now, if you thought that the acclimatization ends there – you’re wrong! A day in the jungle lets you get used to the different time zone and constant perspiration. But that’s only acclimatization pt. 1!

Acclimatization pt. 2 runs in parallel with acclimatization pt. 1. It’s all about getting used to the local cuisine. And get used to it one must as there ain’t a great deal of standard European fare. So that’s just what we did…

First, one really should always ask if a dish on the menu is spicy, for ‘spicy’ in Indonesia can easily mean ‘blow your head off’ spicy. Be careful!

Second, also treat with caution the local fruit. It may be so unusual to one’s euro-stomach… I’ll let you fill in the rest ). I’ll just add how in Indonesia far from all toilets are kitted out with toilet paper. Tip: keep a roll with you in your backpack.

Third… no, this isn’t a tip – it’s a fact about the above-mentioned fruit: oh my gourmet – it’s scrumptious!

Fourth: you can get it right on the roadside: 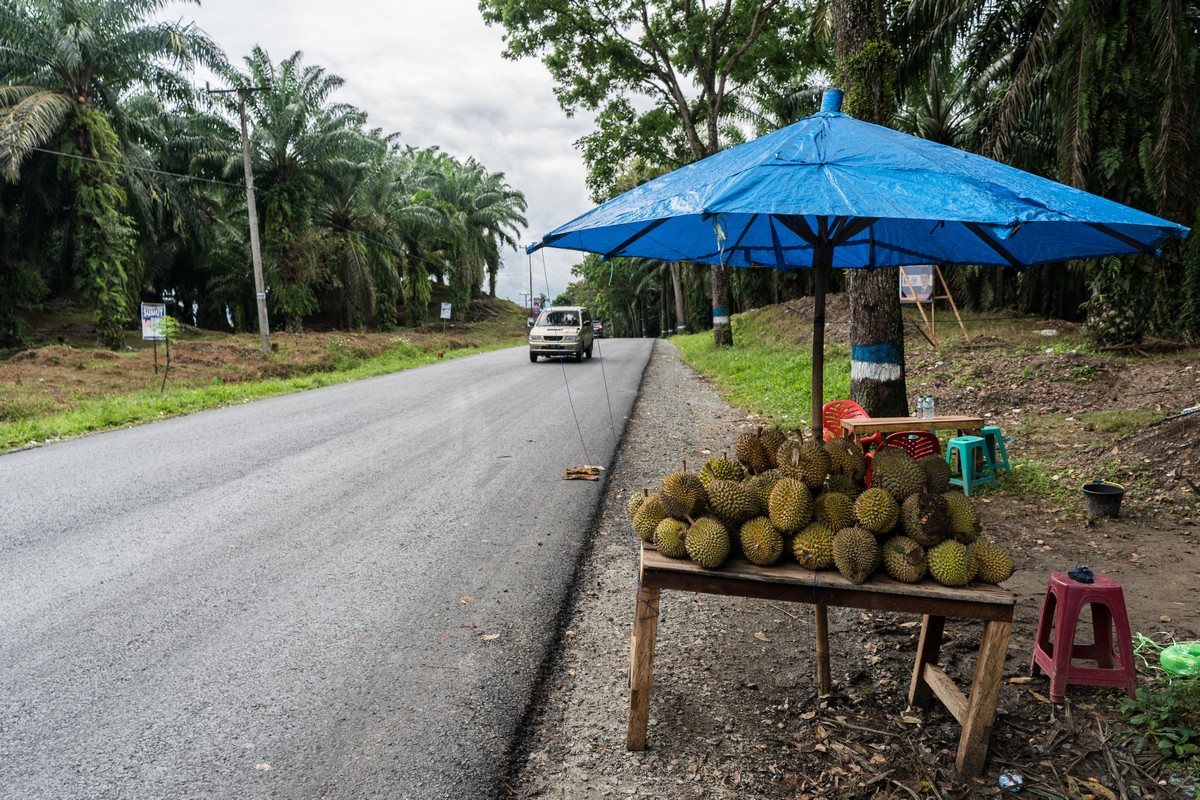 You don’t get roadside durian in Europe. You don’t get durian as tantalizingly tasty there as you do by the roadside in Indonesia either).

And here are the cashew. The fruit is edible, but tastes pretty awful. The black nuts below freshly picked a little poisonous; our experiments using live humans permitted us to conclude that these taste worse than awful – they’re thoroughly disgusting – while the chemical composition completely numbs both the tongue and lips. I didn’t try them this time. Maybe next time. Honest.

He are the human guinea pigs – poor things: 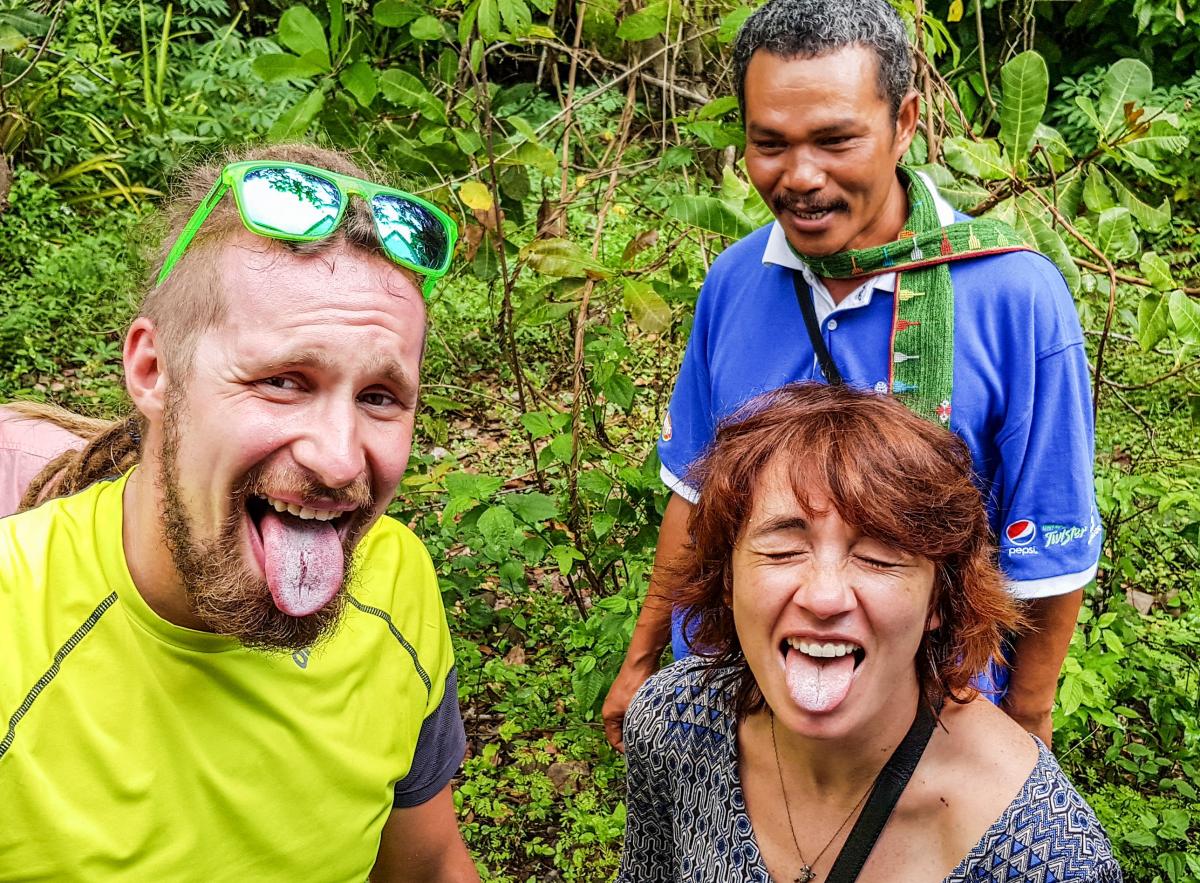 The guinea pigs weren’t aware of the following facts:

“Within the true fruit is a single seed, which is often considered a nut, in the culinary sense. The seed is surrounded by a double shell containing an allergenic phenolic resin, anacardic acid, a potent skin irritant chemically related to the better-known allergenic oil urushiol which is also a toxin found in the related poison ivy. Properly roasting cashews destroys the toxin … The shell of the cashew nut contains oil compounds which may cause contact dermatitis similar in severity to that of poison ivy, primarily resulting from the phenolic lipids, anacardic acid, and cardanol. Due to the possible dermatitis, cashews are typically not sold in the shell to consumers.” – Wikipedia.

Not long after their having knocked a few nuts back, their faces started to contort, they went pale, their tongues went numb, and red blotches appeared on their lips – burns from the toxins. Even a painful-looking crack appeared down the middle of one tongue! Thankfully it wasn’t too painful, more alarming really: ‘oh no, what have we done?!’ By evening most of the unpleasant symptoms had passed, but we’ll never forget that exotic experiment ).

Btw, the guide in the background all agrin is the naughty – or forgetful – one who failed to tell us about the naughty nature of raw cashews.

There are modern highways here, but we saw them… twice. We seemed to find ourselves only on narrow roads with houses down both sides and with folks coming and going and hustling and bustling all around: some folks are rushing about on errands, some are selling food, others are preparing soup, still others are drinking it. Children run around endlessly, mopeds scream past endlessly, and on and on – you get the picture. All of this is a wonderful sight, of course; the only problem is it all tends to reduce the average speed on a such a road down to about 20-30km/h – for all the 100-200km you need to cover. Grrrr! 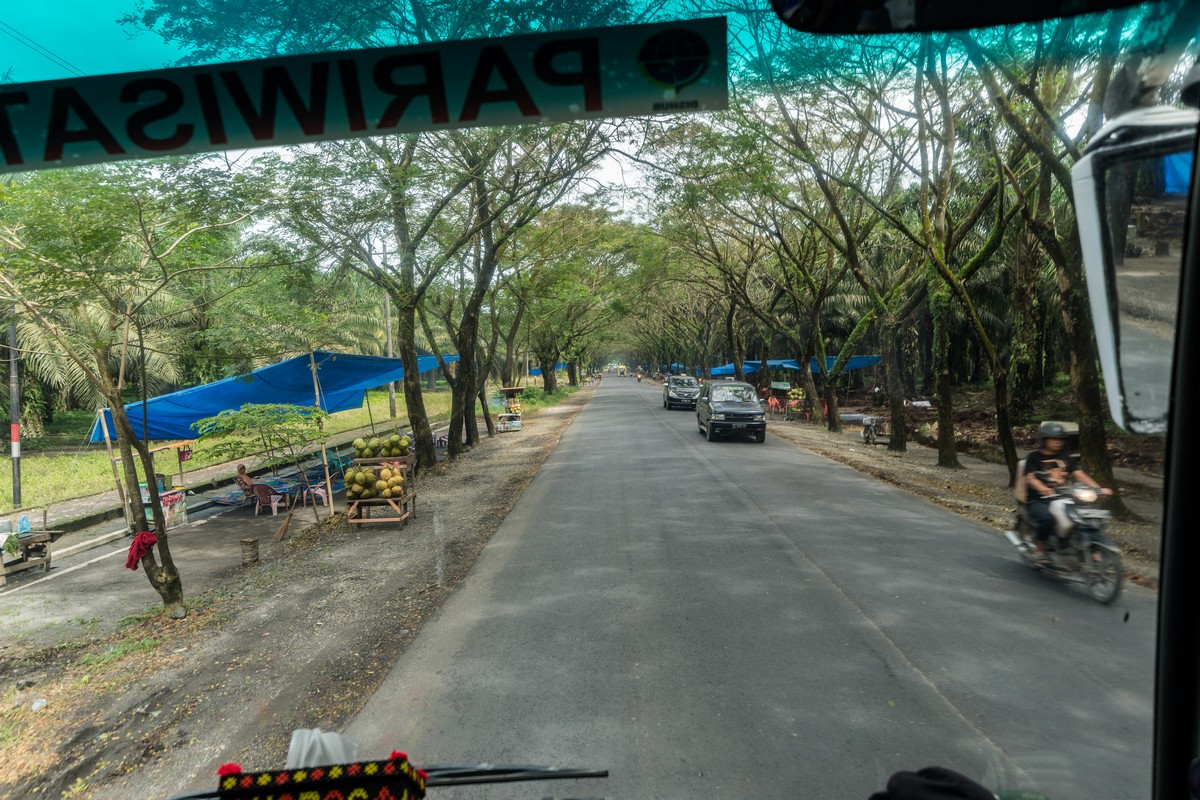 And then there’s the driving here. How they overtake with scant regard of what vehicles might be coming the other way – one could easily have a heart attack. I decided to just look away (forcing oncoming cars onto the verge to avoid a head-on collision is quite normal here!). 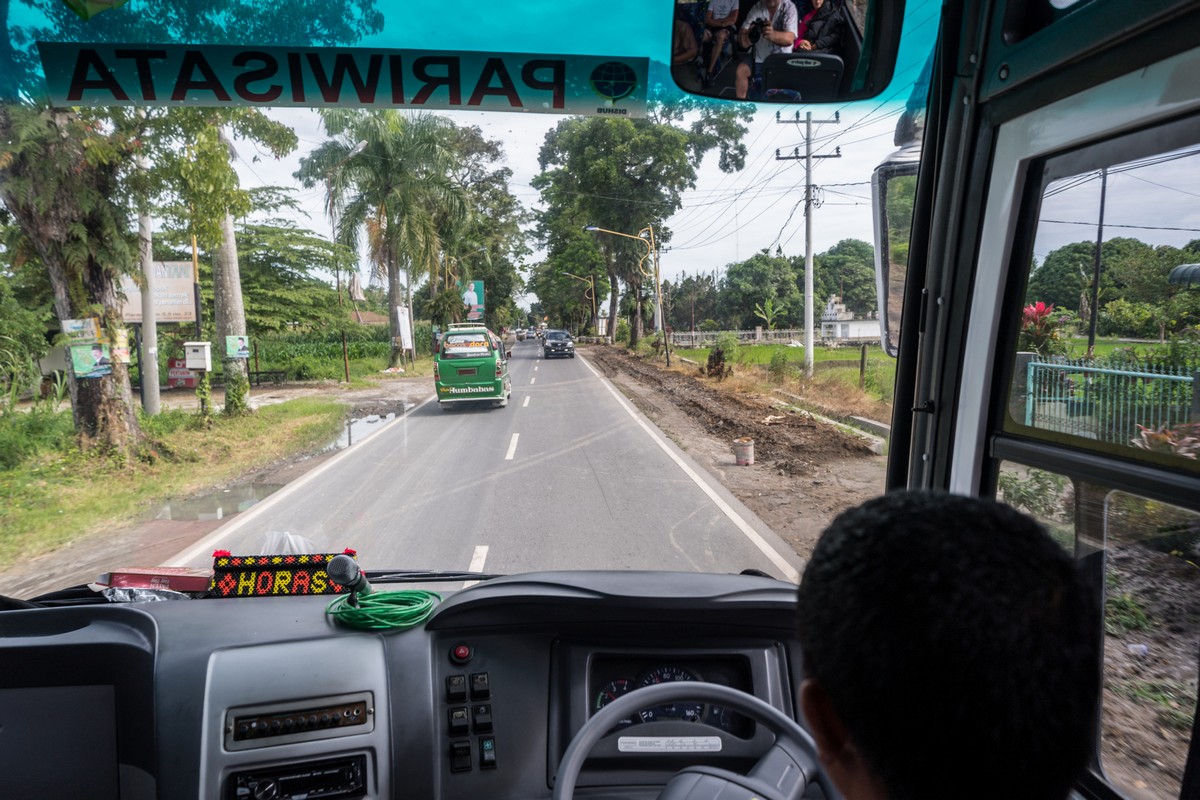 I mean, just check these next three pics!

I went to the back of the bus to avoid the spectacle and do some pics-sorting on my laptop. The views out of the windows were rather charming – with volcanoes dotted about on the horizon:

So yes. The driving needs acclimatizing to too – since there’s no avoiding it: it’s the only way to get about. We didn’t see a single helicopter on our travels there.

So if you do ever get here, don’t forget to order a long bus with lots of seats. Then you can use the backpacks for pillows and get some sleep on the bus (or at least hopefully avoid having to watch the nerve-wracking spectacle of Indonesian driving). Sleep is a good idea as there won’t be too much sleeping going on later when we get to the volcanoes. But more about that in the next post…