If you were hoping that was the end of my Rotorua trips, volcanoes and geothermal stories, then you’re in for disappointment. I still have lots to tell – your popcorn stocks may well run out before I’m done!

It’s time now to enjoy a ride around the lake, including a trip on a helicopter. 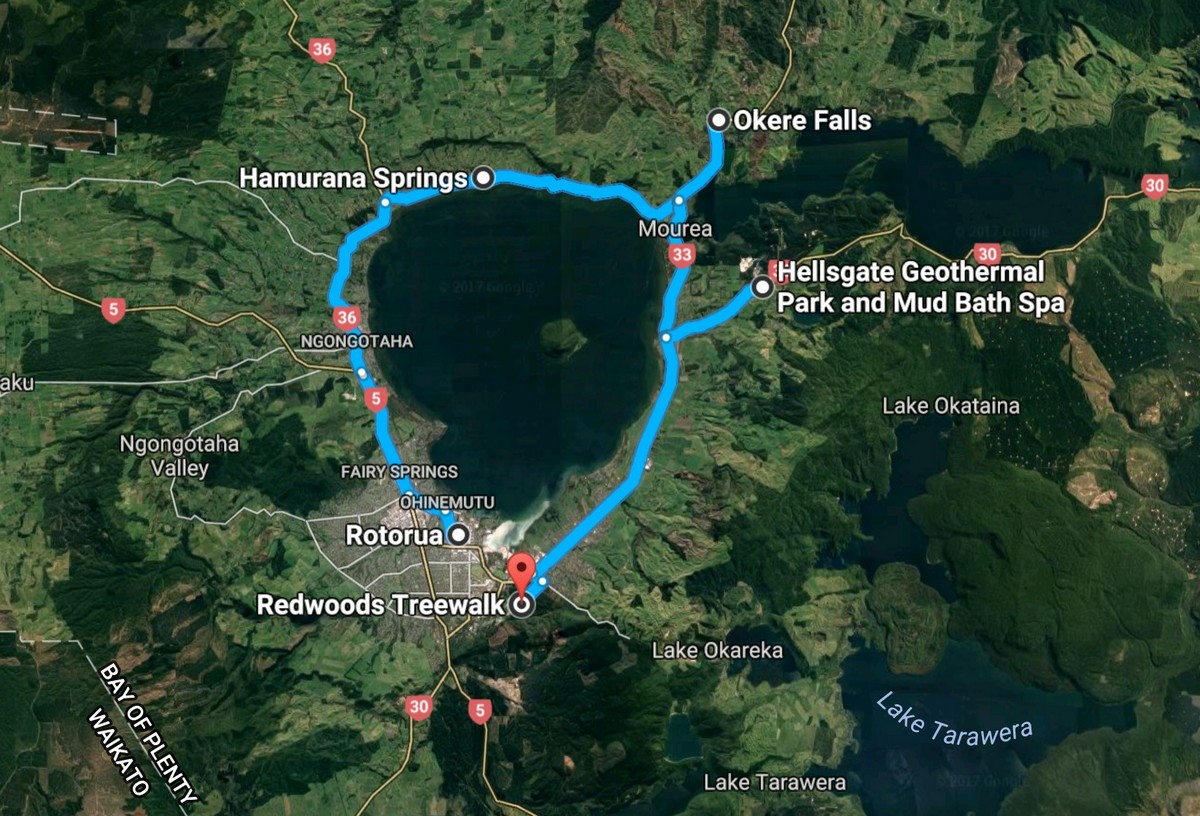 Let’s go clockwise. The first stop on the list is Hamurana Springs. Here there are mineral springs and a magnificent sequoia plantation.

The trees are impressive: these huge sequoias – or redwood trees – were brought from North America and planted here, so they’ve grown this big in… how many years? Less than a hundred, apparently. Check it out: some of the trees in this area were planted in 1901, and these in particular were planted in 1919.

The brief facts and figures are on this information board, which you can zoom in and read: 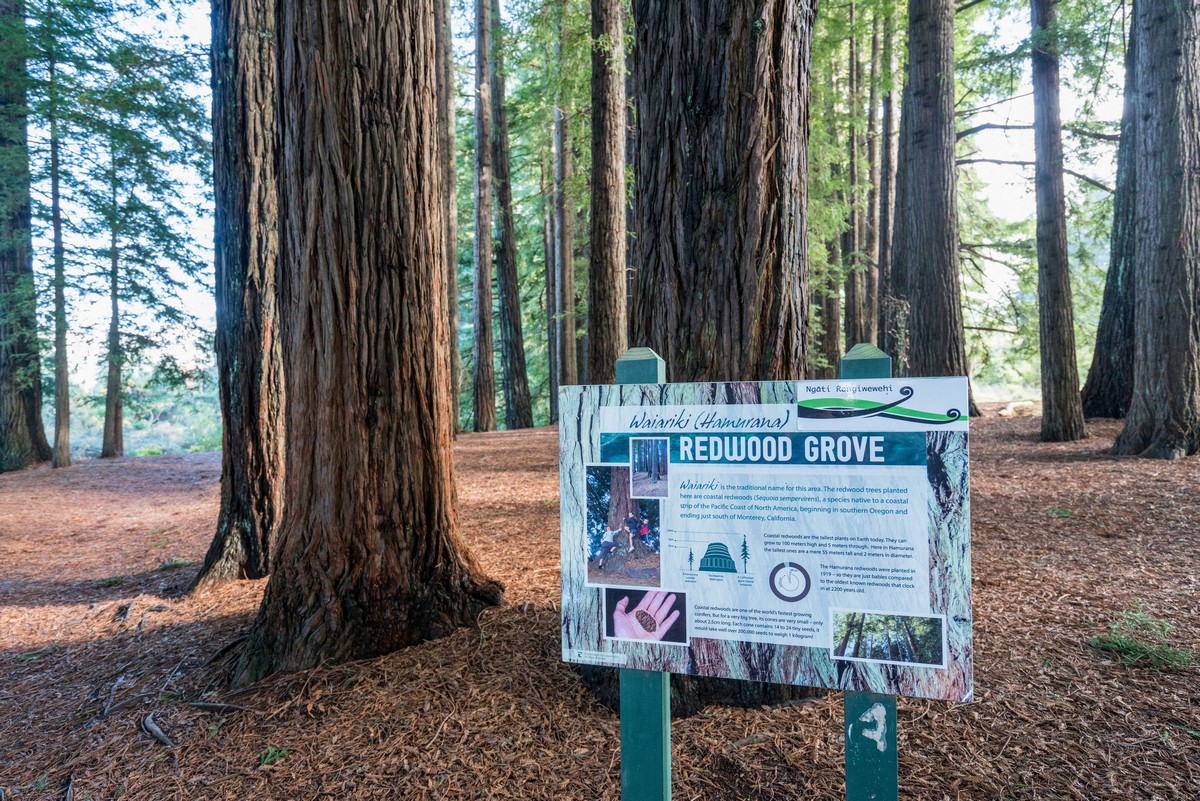 Now, the real treat is the local mineral springs. The water here is crystal clear, as clear as the air; it’s a pristine landscape –  and, naturally, there are black swans:

Here’s the underground water source, producing ‘two Olympic swimming pools per hour’. The water temperature is a constant +10˚С. It takes 70 years for the water to flow from its underground aquifer somewhere deep in the local volcanos and emerge as this spring! 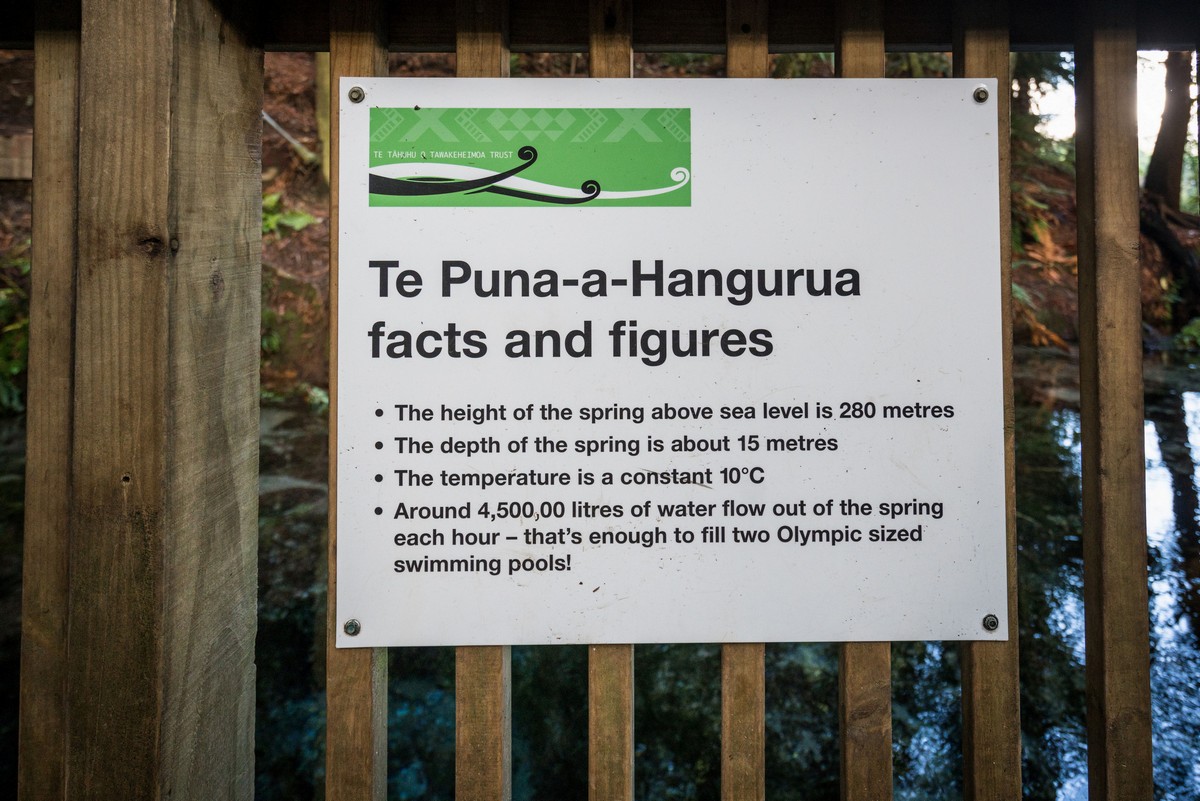 The ‘dancing sand’ is also a very interesting phenomenon. The water flows from underground in a steady stream, and the sand swirls about in it. You can see it if you look closely at the photos and the GIF image:

And here’s yet another absolutely beautiful place:

By the way, this is where I saw that oak tree I thought was several hundreds of years old, which threw me into confusion. Basically, it couldn’t have grown so large here, given the time available! Or is the local volcanic soil so rich in minerals that it’s managed to grow this big in just over a century, just like the sequoias?

The second stop on our route was the Okere Falls. It was fine, it was cool –  it just needed some kayakers. In fact, there were a couple; but we arrived just as they were loading their boats onto a truck and leaving.

An ancient, 100-year old turbine – this is what they used here in those days. The topic of industrial cybersecurity instantly came into my mind, although this lump of iron is not exactly ‘cyber’.

Next up – another astounding volcanic area that contains plenty of gurgling and hissing of various undergroundnesses – that goes be the reassuring name of Hell’s Gate, aka Tikitere:

I like it here, one reason being that it’s not so aggressively promoted as a tourist spot; therefore – few tourists (hooray!). So few, in fact, that we were practically the only ones here (hooray!). As we strolled around we wondered why the marketing of the place doesn’t seem to attract more folks. I mean, its slogan – ‘The BEAST of All Geothermal Parks’ seems good enough… although – hold on: maybe a slight edit would help: make ‘Mud Spa’ – mentioned further down on its sign and flyers – the main title: ~ ‘Curative Geothermal Spa’, with mentions of mud, further down the sign instead? :).

George Bernard Shaw was a visitor in the early 20th century. And, of course, ever the (much-quoted) archetypal man of letters, he just had to leave his mark – in letters – on the place. He gave names to some of the burping springs and piping hot lakes; that’s why they have such funny names:

Humor is maintained today by the resort’s management: 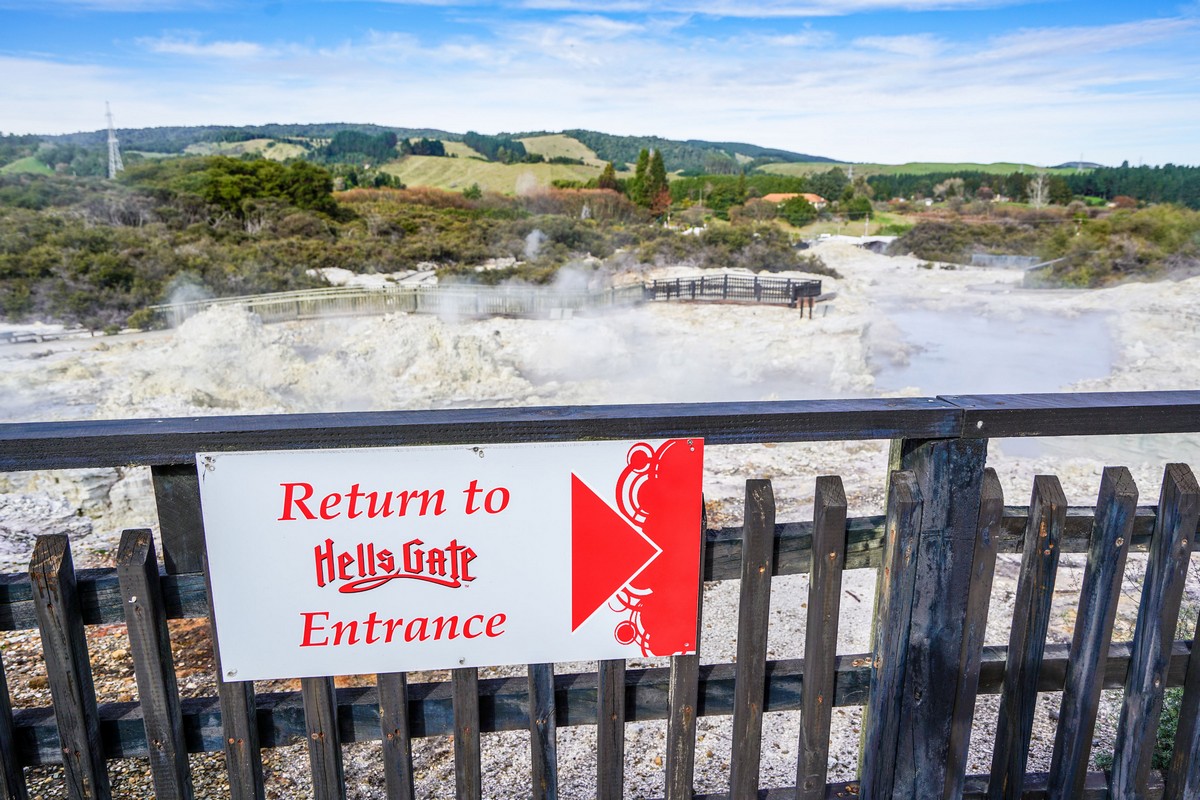 The smell of sulfur here is strong. There’s so much of it in the air that it even turns the trees yellow:

They say it’s the largest hot (40˚C – perfect) waterfall in the Southern Hemisphere. Ok. The largest. But not the best. Too sulfury, too gray, too smelly. The hot waterfall on the Kuril island of Iturup – I think that has to take the ‘best’ crown :).

A bonsai-volcano! Woah! Just like a regular volcano – meaning it’s formed based on the same principle – but it’s made of hot sulfuric mud instead of lava!

Here’s the lake containing healing sulfuric mud. Folks smear themselves with it, and it’s also sold in the local stores. The temperature’s just right for a dip too…

Best not bathe in this pool. Check out how hot it gets:

Next up: Whakarewarewa Forest. Lots of different walking routes here from short (a mile or so) to long (25 miles). You can bike the routes too. Beautiful sequoia trees here. I’ve already written about them, so here – just the pics:

Some sources on the net call this place the No. 1 must-see place for tourists – better even than Wai-o-Tapu and Waimangu. I think that’s because it’s thought that most visitors will never have seen such tremendously towering trees. Fair enough. But if you want to see even taller and older redwoods (2000+ years!) – get yourselves to the other side of the Pacific :).

All the pics from NZ are here.