Now, boys and girls, tell me what you know about volcanic eruptions?

For example, what types of volcanic eruptions are there? Ah, I see you don’t know. There are actually several types. If you’re interested, check them out here. And how strong can they be? “Very strong!” – that’s the right answer. But scientists wearing lab coats and equipped with microscopes have identified 8 types of volcanic eruptions classified according to magnitude; this is called the Volcanic Explosivity Index.

I especially like the “Description” column in the “Classification” table. It says eruptions can be effusive, gentle, explosive, catastrophic, cataclysmic, paroxysmic, colossal, super-colossal and mega-colossal.

These terms are ideal for adding some diversity into your work slang and an opportunity to flaunt your knowledge: “Vesuvius and Pompeii – that was just a paroxysmic paroxysmic eruption!” (the repeated use of “paroxysmic” is tautologically quite legitimate here).

However, paroxysmic eruptions are not that, well…, paroxysmic in relation to the Earth’s entire ecosystem – they only affect their immediate environment. However, super- and mega-colossal eruptions (levels 7 and 8) are altogether more serious. They can lead to a global dimming of the sun and global cooling for several years. During the history of humankind, this has only happened once – if anyone is interested, you can read about the eruption of the Tambora volcano in Indonesia in 1815.

What am I getting at?

I and my fellow traveler A.B. are travelling southward along New Zealand’s North Island, towards Lake Rotorua. A little bit of Internet research reveals that this lake is the crater of an ancient volcano which made a real bang some 240,000 years ago. Its eruption was (supposedly) 100 times more powerful than that of Vesuvius.

Back then the islands that make up New Zealand weren’t inhabited, so there weren’t any witnesses of that super-colossal bang (luckily for them).

And today, 240,000 years later, A.B. and I have once again made it to the very place where that colossal volcanic bang occurred.

What can I say? Today there’s almost no trace of that ancient event. We visited the very place where the sub-plate mass burst into the atmosphere. No doubt it was a super-catastrophic ashes-magma-sound-and-light show. I’m not sure there were any surviving witnesses of any appreciable organic matter. It appears none of our simian ancestors were around to leave any carvings documenting the event in the local caves, but who knows?

//1. By the way, it can be very cautiously stated that by that time the simian/human model had already transformed into a human/simian one, and reached the level of a prototype release of a light Homo-sapiens-type model. Don’t quote me on that, though.

//2. I really hope that the entire team of developers who worked on the “simian/pseudo-human” project got decent bonuses…and that they’re still have a celebratory drink! I mean, what other explanation can there be for them not getting back to their workplaces and correcting the obvious errors? (Or is there a problem with our observation methodology here?)

//3. I really, really hope that today’s political tumult is not evidence to support statement 2, i.e., that they have finally spent all their bonus money and are now back in a grumpy mood nursing a hangover. Maybe they need some hair of the dog?

It’s really hard to believe that the local landscape (possibly) looked like this 240,000 years ago:

Now, A.B. and I have finally arrived here, after our friendly tourist visit to Hobbiton. And it’s some place this Rotorua!

It’s difficult to believe that some time ago this beautiful lake used to be a world killer menacing the entire planet, and that tons of potent poisons, rare-earth elements, as well as gold, platinum and diamonds erupted from here into the atmosphere, stratosphere and various other spheres. Everything spewed into the air in a really cool show, but there are definitely no videos of it on YouTube. 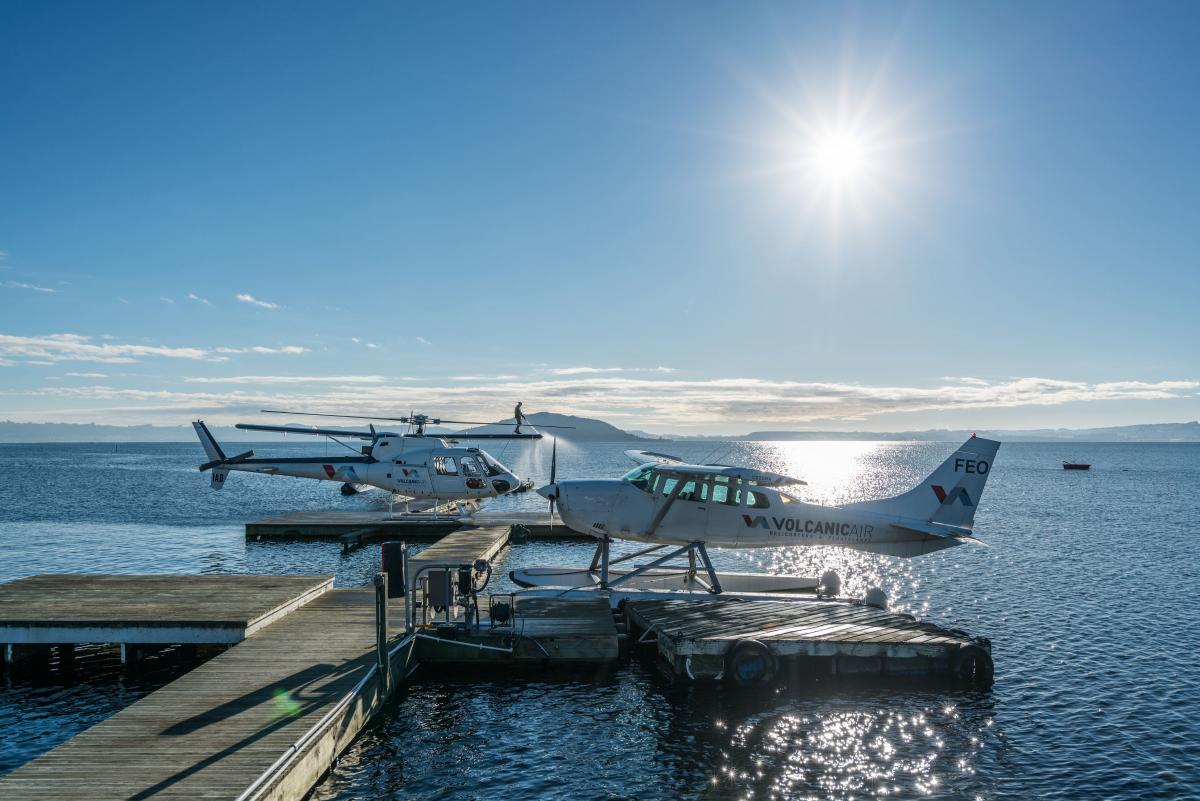 All that happened years ago, no one remembers for sure. But, all around the lake there are still sulfur springs that are hissing from underground, boiling, bubbling and giving off a stinking vapor. The local landscapes are multi-colored, and there are places where you really need to wear a gas mask. Let me repeat: 240,000 years have come and gone, and the local landscape is still simmering. That longevity for you!

By the way, this place is called Sulfur Bay. 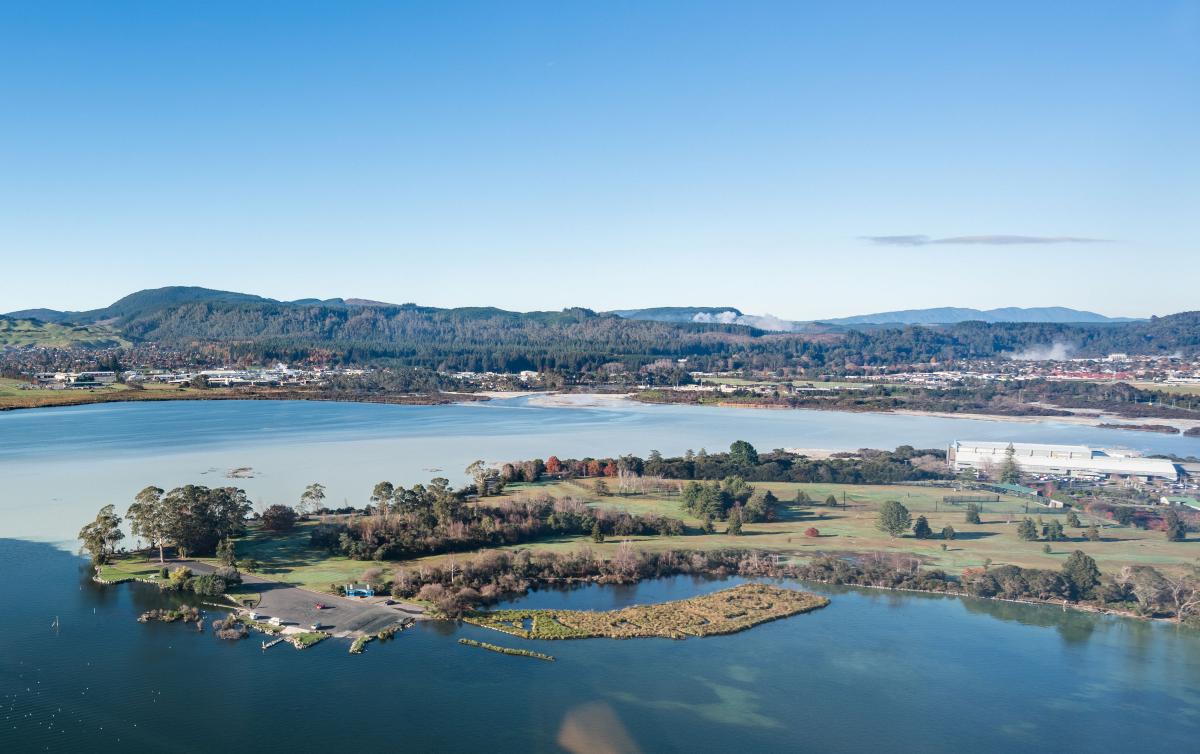 The whitish-gray stuff on the water is hot sulfur. If you want to enjoy the health benefits of sulfur, this may be the place to go bathing. Well, not exactly: the whole place is toxic and there are loads of fumaroles. Don’t go there! You’ll get boiled alive. Better to order the local volcano medication from trusted sources (more about that later).

So that’s what life’s like around the old volcano lake: vegetation grows like crazy, which cheers the local inhabitants. However, the locals say there are also downsides, namely:

There you have it. The surroundings are pretty, but the air stinks of sulfur.