As promised, more tales of the unexpected from NZ…

After Auckland, we drove south, heading for Roto-Vegas – aka Sulphur City. And the first place of special interest we came to en route was Hobbiton.

Yes, the village where hobbits live; rather – used to live; rather – where they were portrayed as living when a film featuring them was shot. And not just one film but several Lord of the Rings films – about the lives and extraordinary adventures of little people who live in underground lairs with round doors and windows.

In four years little has changed here. I was here in January 2013 – midsummer in NZ.

Thousands of Lords of the Rings fans come here from all over the world every year. And knowing the films inside out, they marvel at finally seeing all the different props from the films. For example, this here humble-looking footpath turns out to be anything but humble, but the location upon which various epochal hobito-historical events took place. I can believe it: the below setting is almost always chocca with giddy tourists having their pic taken :). I was real lucky getting a tourist-free photo :). 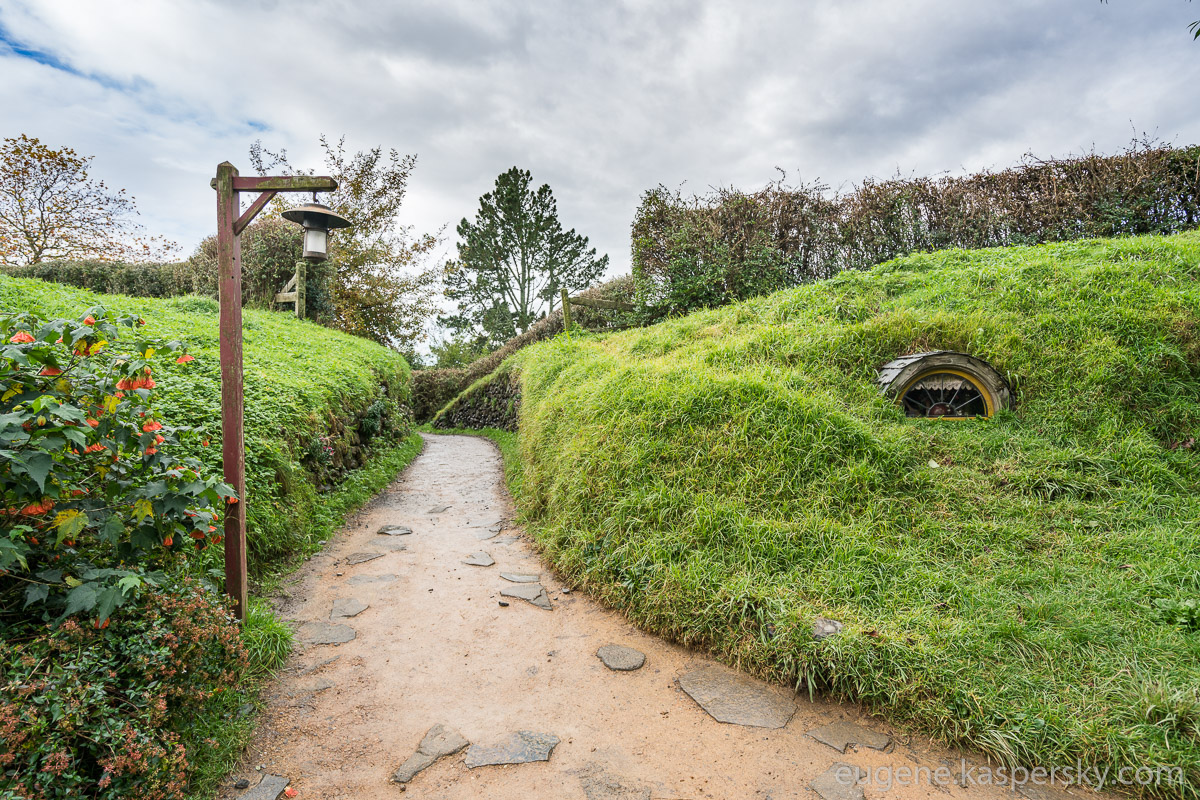 But don’t be thinking I’m criticizing of being skeptical or cynical. Just the opposite! I’ve read Tolkien’s books and loved them. I’ve even read The Lord of the Rings twice, and I rarely ever do such a thing. And I’ve seen the first of the films. Hmmm, note to self: top-up on my hobbit films. And – no time like the present – since I’m sitting in Dubai waiting for my connecting flight back to Moscow (five hours), I think I’ll start today!

However, you could hardly call us (A.B. and me) Ringers. Compared to A.B. I’m a full-on Tolkienist, since he’s not read any of the books and only seen one of the films – which he didn’t like. Therefore, our inspection of Hobbitation was rather perfunctory, albeit most pleasant.

Here’s an amusing anecdote about the film set:

As we were told, the director of film flew around here looking for the ideal spot – one that most resembled the backdrop as described in the book. When he saw these gently rolling hills, the neat grass, the lake and the river – he was over the moon: bingo!

So, the director came to an agreement with the owners of the land, and work commenced transforming the area into a film set. The NZ government also got in on the act – bringing in the army (!) to build a road to Hobbiton (incidentally, the army were also used as extras during filming). And that’s how Hobbiton came to be, with hardly any major changes to the existing landscape.

The only thing they did have to add was a tree above the burrow of the lead character. I can’t remember what tree was there in the book (could it have been an oak?:) but, anyway, they had to make it out of plastic. Even the leaves are plastic too, and from time to time they get blown off the branches and you can find them on the grass. Here’s the tree in question: 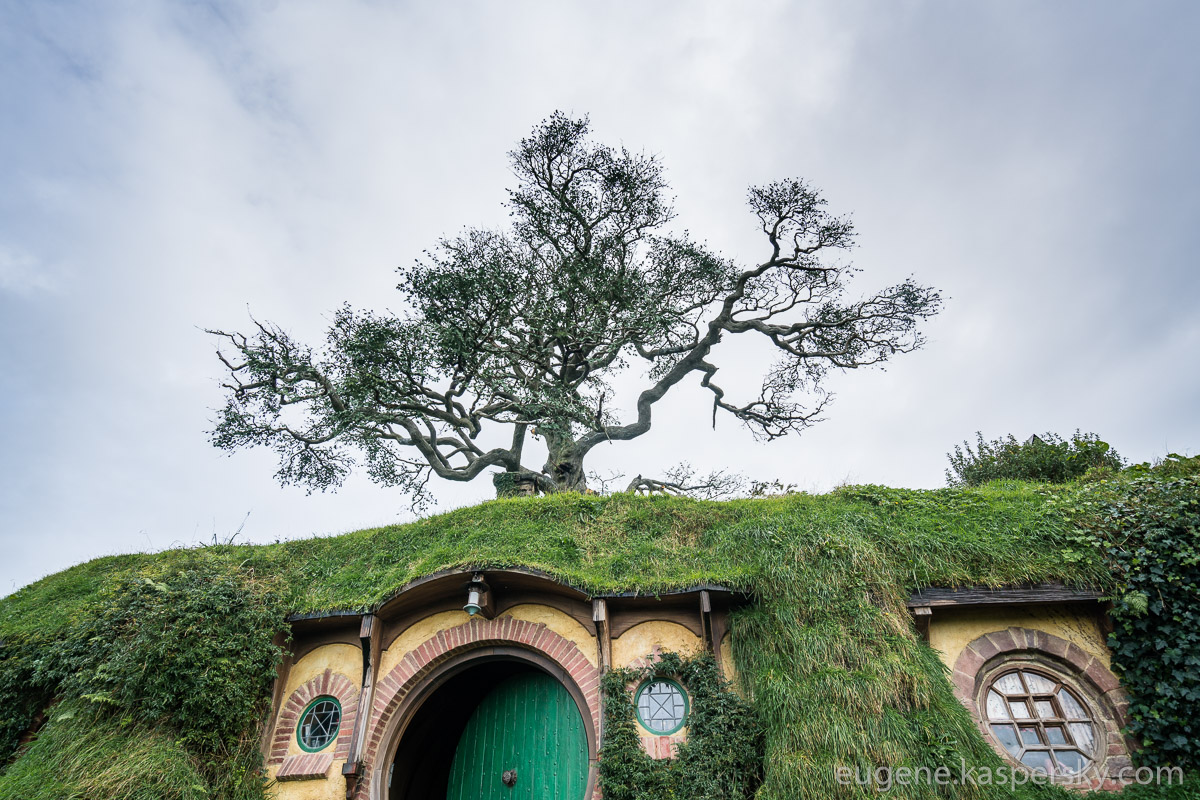 While this tree is completely natural – no plastic whatsoever: 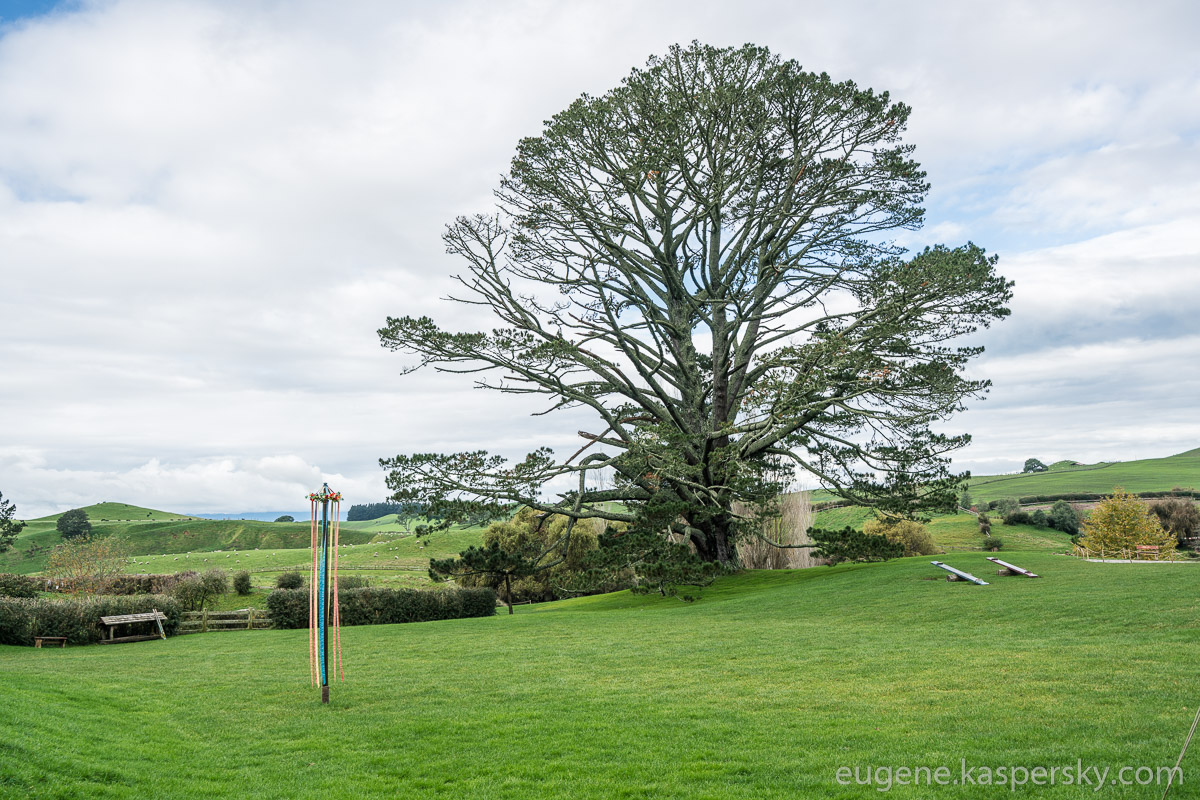 At one time there was a real farm here. Then they built the film set. Then they shot the film. Then they wanted to pack up the set and take it away – at first. Then they reconsidered – and decided to turn it into a museum. Smart idea. At 80 dollars a head and plenty of tourists wanting to see Shire up close – a tidy little business.

Alas, the doors and windows to the hobbits’ abodes aren’t real. I mean – there’s nothing behind them; well – nothing apart from soil. I think they should bring the army back to dig our proper little dens. That’d make the attraction even more… attractive :).

The rest of photos from Hobbiton and the rest of the NZ pix are here.

Btw-1: Rumor has it that the hobbit theme brings NZ billions of tourists’ dollars. Dedicated guides on hobbit places are sold that show you all the sites where filming took place, to which many tourists get to and tick off each, take photos, and move on to the next Lord of the Rings or Hobbit place. Really, NZ is one big film set :).

Btw-2: Another tale from the Hobbiton rumor mill: in addition to using army troops as extras in the film’s battle scenes, a bunch of bodybuilders was also recruited from sports clubs from both NZ and Oz. In the film they’re looking great; but it was behind the scenes where there were problems. First, they didn’t like losing (!), so even when the script commanded ‘lose’, they fought real hard to win. Second, of a night, the line between on-screen happenings and reality started to blur: there were real fights between the ‘civilians’ who played the elves and gnomes on the one hand and the bodybuilders who played the Orks and trolls on the other!

That’s all for today folks. More NZ tales and pics coming right up. For now – teasers of what’s to come: