So, who… you know, got there first from overseas? I was just curious after reading various scholarly versions and falsifications. So I read up more on the subject, and I discovered the following:

So who first discovered America? You know, like a zillion years ago? Well there’s no precise answer to that question one as it was… a zillion years ago, before things like writing and the keeping of records, and a zillion other useful things were invented. But, apparently, it was someone who was from what is now Siberia, who, at some point during the spring of the ice age, crossed the (possibly, at least in parts, dry) valley between the two glacial mountains on either side of what is today the (very wet) Bering Strait.

Who knows today what the Bering Strait looked like back then? Was it completely dry? Was it a swampy marsh? Or was it much like it is today – a sea? Did that first Siberian walk it? Canoe it? Swim it? We’ll probably never know, unless…).

And what made them decide to go east in the first place? I mean, there’s no way crossing into ‘America’ would have been easy. Totally way: it would have been nothing less than a heroic feat. It surely means that the first Siberians were running from some adversity that was even worse than the adversity of scaling glaciers some several kilometers high, of extreme cold, of lack of food, and of tons of uncertainty.

We’ll probably also never know if the first ever expedition of Siberians traveling to America was successful. Did they make it all the way? Or was it only the second, or third, or 73rd group that did? Or maybe they returned home and their genes now can be seen in the faces of many a different far-eastern/northern peoples – like the Eskimo and Chukchi?

So, we don’t know precisely who discovered America, but how about when?

Well, modern-day geneticists reckon that it was around 15,000 to 30,000 years ago. Actually, they say that there were at least two waves of migration and settling. About this plenty is written in the excellent book The Journey of Man by Spencer Wells. Mr. Wells shows us how there could have been more than two independent waves of tribal migration from Siberia (via Chukotka). How many exactly – or why – is unknown. And we only know about the successful waves. About the migrations in which migrants were swept away on the seas or died of cold or hunger – no one knows. So yes: we know precious little about the first ‘conquerors’ of America– we only know they really were ‘the first’. But never mind. Let’s continue…

Have a look at a globe! I’ve seen ruins of Viking settlements with my own eyes – in Greenland. Vikings lived there for sure, a long time ago and for a long time. And from there today’s Canada is a mere stone’s throw. Look for yourself: if Erik the Red and his army of vicious Vikings could get to Greenland, well, they could have gotten to today’s North America!

I believe that some 1000+ years ago the Vikings, under the relentless bloody tyranny of the ginger one, did get as far as the Americas – to its northeastern parts (Canada), settled there, and tried to sort themselves some kinda decent daily life and comforts – in addition to their inevitable flurries of banditry and debauchery. I back up my theory with the findings of archeological digs up in Arctic Canada (have a Google yourself). Also, I do recall that in Iceland many women had American great, great, great… grandmothers. That is, the Viking expeditions under Erik the Red never came to anything materially worthwhile or lasting, but they did import ladies to keep them company. First to Greenland, then to Iceland. Oh those Vikings!

Episode 3: From the Pacific Ocean Side.

After reading various books down the years on this kind of thing, something’s lodged in my memory that tells me that there exists circumstantial evidence and cause-and-effect biological signs to the effect that once upon a time expeditions of Polynesians landed at what is today Peru.

And I can believe it. These guys (+ their womenfolk, + household items, + animals) covering thousands of miles from their native islands to gradually settle all along the Pacific coast of what is now North America? – Sure; they’d be up to that. To this day there are Polynesian families who can sail on a primitive boat from Hawaii to Tahiti – that’s 4000+ (!) kilometers – in three weeks without even a compass, using just the sun and the moon as their guides; and they always get directly there, never missing!

So yes, I believe the Polynesians were able to, and did, paddle their way over to the Americas from the west. But that would have been after the Red Scandinavian.

Most folks believe that Christopher Columbus from the Republic of Genoa (now Italy) was the first explorer to reach America. This isn’t strictly true, as the above-written proves: He was preceded by a first wave on ancient migration many thousands of years ago from Siberia. He was also preceded by a few relatively small ‘ventures’ to America by the Vikings and Polynesians. Then the weather turned REAL cold, and such expeditions from the northeast and west came to end, while the distant colonies that had already been established died out, leaving no descendants whatsoever.

But the full-blown, ‘commercial’, long-lasting (lasting to present day in fact) colonization of the continent started in the 1500s, after Mr. Columbus’ ‘discovery’. And the rest, as they say, is history.

But here’s what most folks don’t know about Columbus…

He didn’t ‘discover’ America in one fell swoop – by far. On his first expedition he hit upon the Bahamas, then Cuba, then the Caribbean Islands, and then sailed back home. His second expedition took him back to Cuba, Jamaica and other Caribbean islands (quite right too; I’d have picked such a route:), but those ain’t mainland America. Only on his third expedition (1498-1500) did he finally make it – to today’s South America.

And anyway, there’s no way Columbus himself first set foot on the mainland, in the strictest sense of ‘first set foot on’. It was sure to have been one of his underlings, who would jumped ashore so as to be able to have lent the esteemed explorer the due helping hand from the boat :).

The shores of modern-day Brazil were first ‘discovered’ entirely by chance; by mistake even. But that was the second confirmed landing by Europeans on the Americas. And it was a Portuguese one. The expedition, going (very!) widely around Africa to get to India (wide – to avoid bad weather) accidentally hit upon South America! And it was today’s port city of Porto Seguro where they did the hitting, which, today as back then, is known for its endless sandy beaches:

So there you have a very brief history of the various discoveries of America. The European approaches were made in sailing ships some 20 or 30 meters in length, which traversed the Atlantic. Yep, that’s some journey. Of course, not all made it back. For them – no graves or monuments… lost to sea forever, be they heroes, bandits, sailors of fortune, idealists or whatever. They took a chance leaving the old continent in search of a new one. True pioneers. True adventurers.

So, why my sudden interest in the discovery of the Americas? Well, as luck would have it, I was in Porto Seguro – after our business, specifically mostly on its beach – just recently. And learning about the city’s significant history, I decided to read further on same beach.

Incidentally, low-season Brazilian-coast climate isn’t as hot as I’d expected, but it was still pleasantly warm enough – much more so than where we’d just come from :).

We were in town for our Latin-American partner conference:

P.S.: It’s always best to learn about geographical history by personally visiting the places you’re interested in. Now, I’ll never forget who discovered America – the first time, second time, and all the rest; or what the shores where the first landings were made look like. 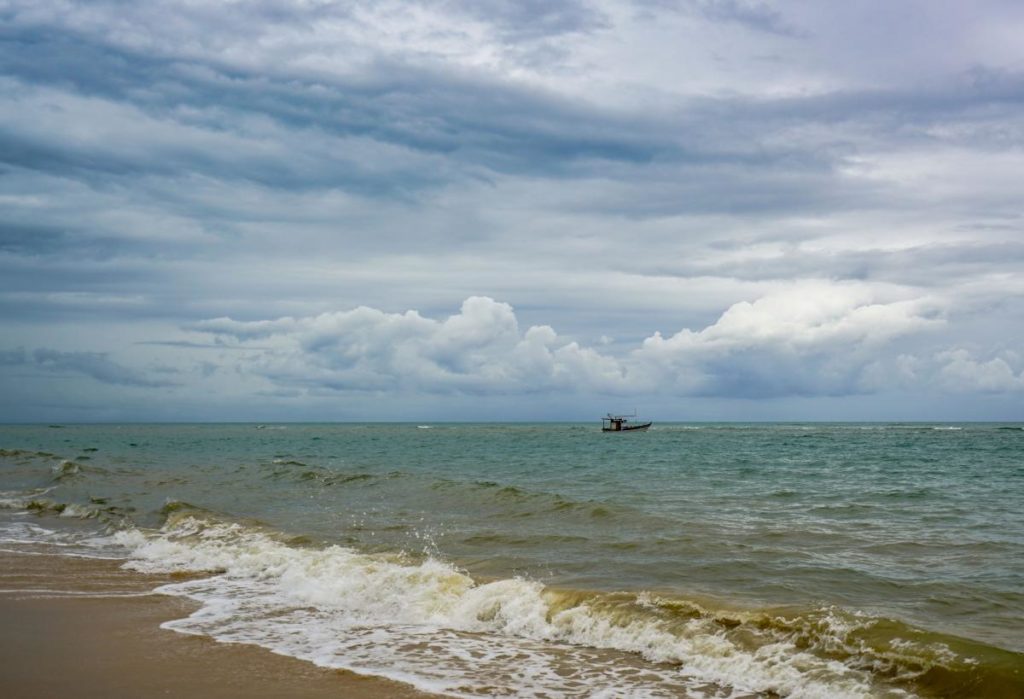